Put the holly in Hollywood with all the festive hoppenings at Disney's Hollywood Studios beginning Nov. 11! Festive decorations line the park — even dinosaur Gertie is celebrating the season. Experience a special holiday finale to the Frozen Sing-Along and witness the Sunset Seasons Greetings projections and "snow" along Sunset Boulevard. Enjoy seasonal treats throughout the park and dine with characters in festive outfits with Minnie's Holiday Dine. Plus you might just see Santa passing by. What a gift! 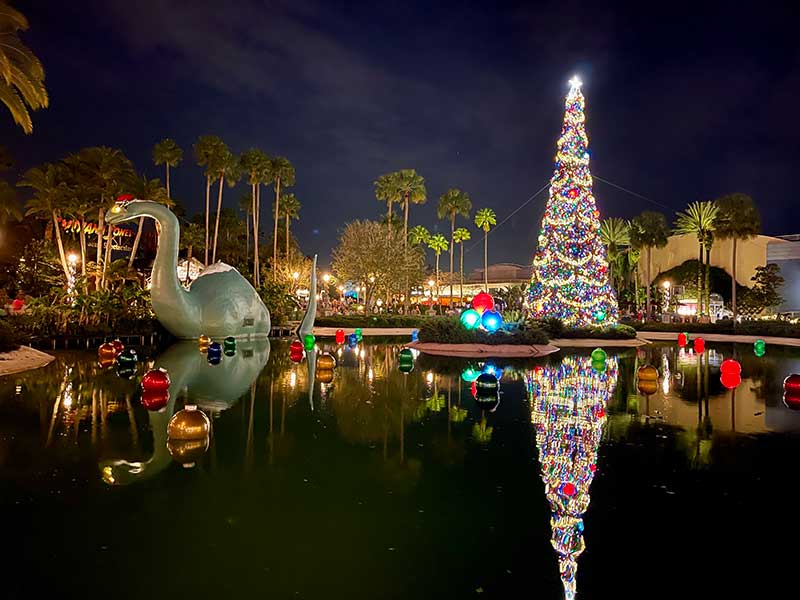 Overview of the Holidays at Disney's Hollywood Studios

The offerings at Disney's Hollywood Studios, kicking off Nov. 11, 2022, capture all of the magic of the holidays with a fun, modern twist, featuring some of your favorite characters. Some events, such as Jingle Bell, Jingle BAM!, have not returned, but we're hoppy that Sunset Seasons Greetings is back for 2022, along with Minnie's Holiday Dine at Hollywood & Vine and the Frozen Sing-Along Celebration with a festive finale. Plus, Santa Claus himself cruises down Hollywood Boulevard in a festive motorcade!

We're here to share all of the hoppin' happiness available for your enjoyment during the holiday season at Disney's Hollywood Studios.

Disney's Hollywood Studios has a bunch of fun holiday decor sprinkled around the park (though you won't typically find any in Star Wars: Galaxy's Edge). From Santa Gertie to the red and white stars that line Sunset Boulevard, the park deserves a Hollywood star for its festive flashiness.

As soon as we arrive on Hollywood Boulevard, the old-timey decorations made of sprinkling tinsel, colorful bells and festive bows make us feel like we’ve just stepped onto a 1930s Christmas movie set. Of course, the old-fashioned Christmas tunes playing along the strip add to the yuletide charm. Don’t be surprised if you see Mommy Frog dancing the Charleston all the way down Hollywood Boulevard! One of our favorite design elements is how the bows of garland are strung across the entire street, creating a gorgeous canopy of glowing lights that make you feel as if you’re truly walking in a winter wonderland.

While Hollywood Boulevard delivers in a big way, Sunset Boulevard is decorated just as beautifully. The lamp posts lining the street are adorned with red and white stars, all aglow. Garland made of tinsel, vintage toy figurines, twinkling lights and ribbon are strewn atop the shops and dining venues along the street. The pinnacle, of course, is the Hollywood Tower of Terror dawning its holiday projections complete with "snow" flurries beginning at nightfall. Talk about being merry and bright! 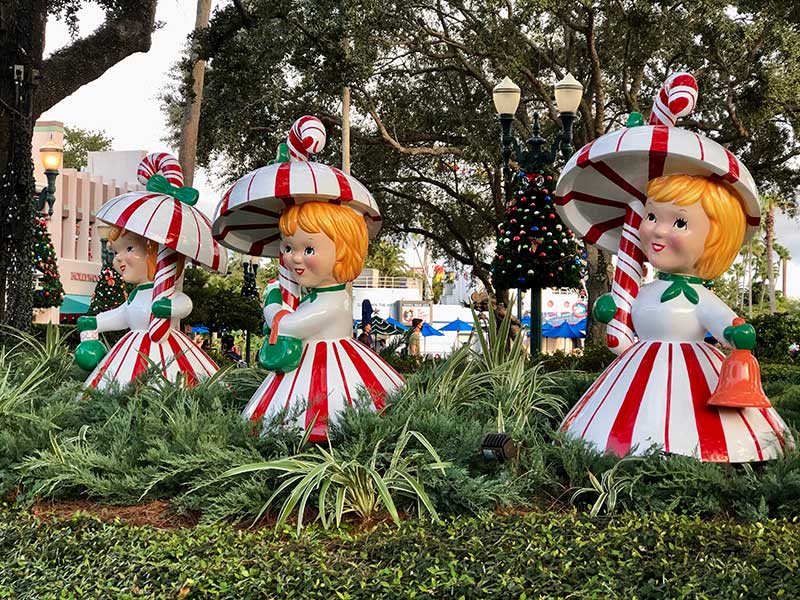 Peeking out from the landscaping and shrubbery around the center stage area, you’ll find life-sized vintage Christmas figurines reminiscent of the ones Grandma Frog used to decorate with each year. We ADORE finding these holiday icons every Christmas season! You can typically find the three peppermint girls on the Brown Derby Lawn, while the pink spaghetti poodles sit right outside Disney’s Hollywood and Vine restaurant. These holiday charmers are the perfect conversation starter and double as a must-have photo-op. Have your camera ready!

You won’t want to miss the park’s enormous 65-foot Christmas tree found right in the middle of Echo Lake. While the tree is gorgeous any time of the day, once the sun goes down, this beauty toadally begins to shine — literally! Just look at that crystal-clear reflection shimmering across Echo Lake. In addition, giant glowing Christmas ornaments float at the foot of the tree. Our best dino gal, Gertie, really gets into the holiday spirit with her festive Santa hat and shiny red ornament hanging from her mouth!

You know Toy Story Land wouldn’t miss out on the holiday decorating fun! The larger-than-life Christmas lights found year-round is even more beloved during the happiest season of all. Woody welcomes guests with a giant holiday, “Howdy!” while wearing his red and white striped scarf! Keep your eyes peeled for even more Christmas touches, such as the popcorn garland, Rex wearing his cardboard antlers, green alien ornaments and giant sugar cookies! You’ll want to take a spin on the Alien Swirling Saucers attraction. The soundtrack gets a little upgrade — the holiday edition! 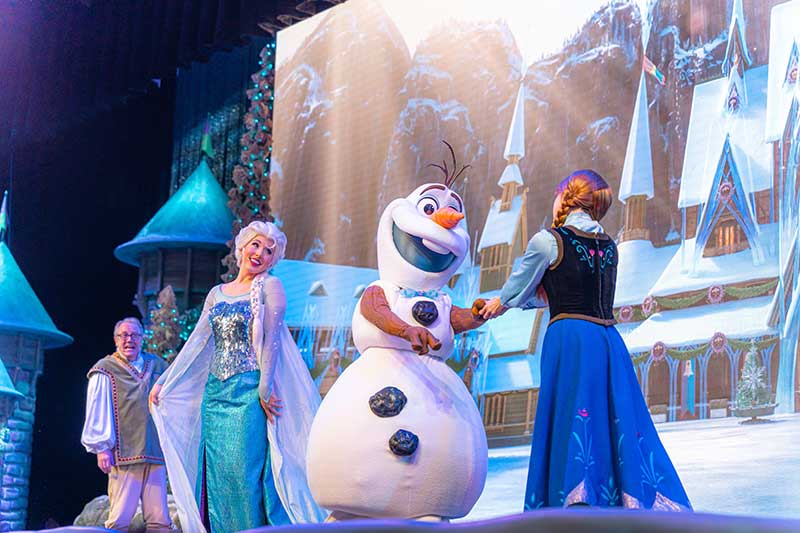 Catch the Arendelle historians, Anna, Elsa and Kristoff recount the story of their kingdom and sing along to your favorite musical moments from the movie. The holiday edition features a special festive finale with a surprise appearance from a certain snowman and songs from "Olaf's Frozen Adventure."

Performing on Center Stage in front of Mickey & Minnie’s Runaway Railway, “Sleigh” is a new a capella group making its debut at Disney’s Hollywood Studios for the holiday season! You’ll want to dance along as this contemporary pop group belts holiday favorites with a fresh and modern twist!

The performance times and locations vary, so be sure to check the entertainment guide in the My Disney Experience app on the day of your visit. 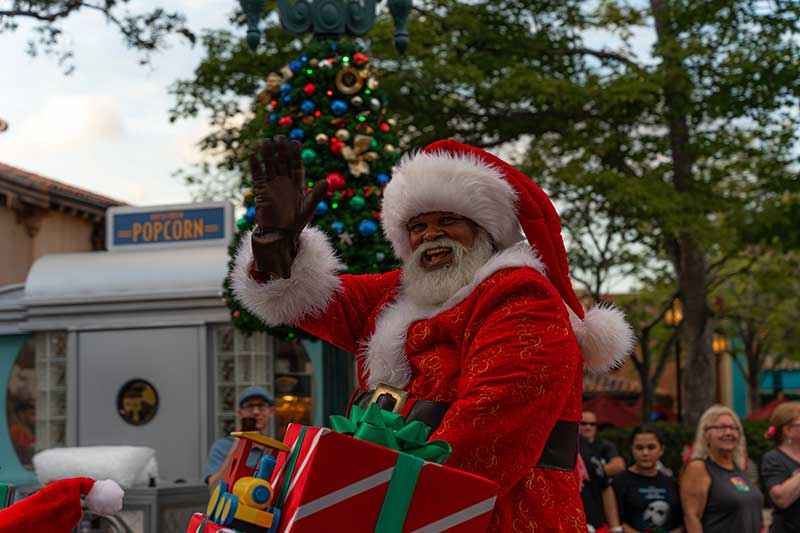 Santa Claus needs a little extra time to prepare for Christmas this year, so he is not greeting tadpoles individually. However, it wouldn't be the holidays without him! He makes time for special pop-up appearances during a merry motorcade at Hollywood Studios. Dancing elves dressed in red and green lead the processional, followed by Santa’s reindeer. It appears that Pluto has accepted the role as Santa’s lead reindeer by the looks of his red jingle antlers! Santa shows off his style, cruising by in a bright red convertible as he waves and shouts merry wishes to Disney guests. 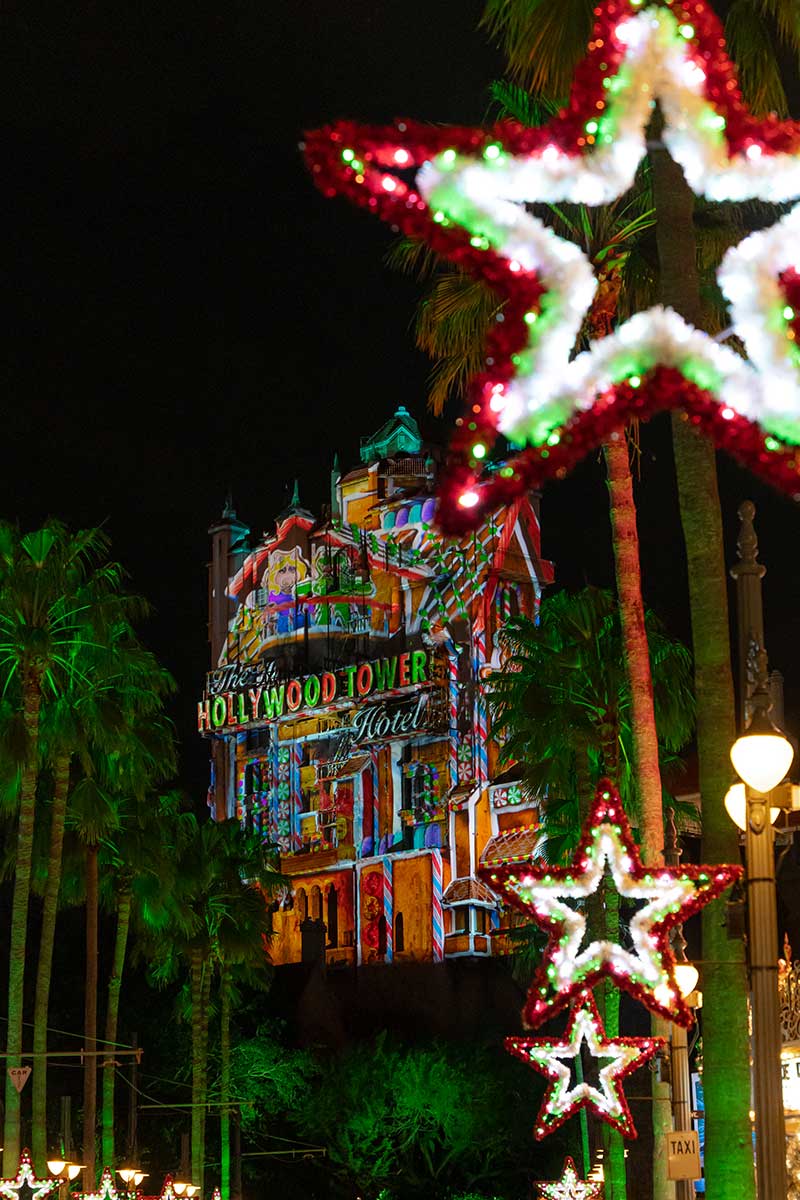 You know it's the holiday season when the Tower of Terror turns into The Hollywood Toy Hotel. Sunset Seasons Greetings lights up Sunset Boulevard with dazzling projections and more falling "snow" on both the street's billboards and the Hollywood Tower Hotel. Holiday scenes featuring Mickey, Minnie, Olaf, Woody, Buzz and more come to life with tons of captivating color. This show takes place intermittently most nights, so it's perfect to catch in passing on your way to or from Rock 'n' Roller Coaster.

The holiday projections alternate with the tower’s nightly transformation into a Beacon of Magic for Disney World's 50th-anniversary celebration.

Character meet and greets are always a popular favorite at Disney World. But when characters are dressed in their cutest holiday attire, we just can’t get enough! While there aren’t any specific meet and greet locations (at Hollywood Studios) for this holiday season, you will want to keep your eyes peeled. 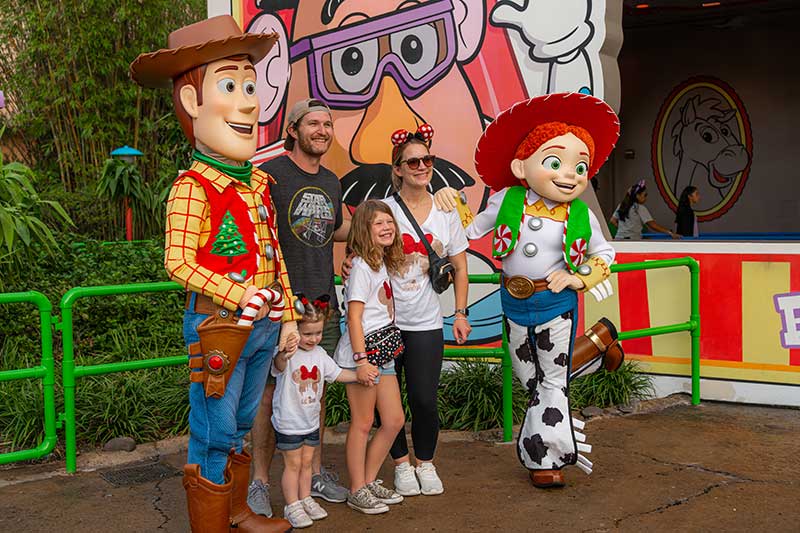 Lily found Woody and Jesse greeting guests outside of Toy Story Mania. She hopped over, got her autograph book signed and snapped a few photos with the Toy Story duo. Look how festive they look in their holiday vests! Woody is even sporting a candy cane in his holster.

Tad spotted Chip 'n' Dale squirreling around with guests on the Brown Derby lawn. Their winter hats and scarves are oh-so-adorable! 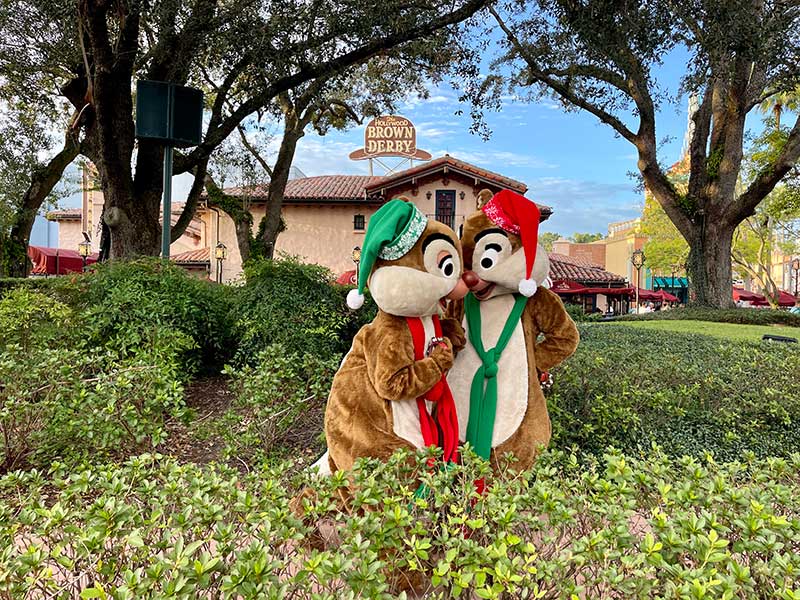 Looking for the perfect holiday photo for this year’s family Christmas card? Well, falalalala — you’re in luck! Disney's PhotoPass photographers will have you laughing all the way with this year’s seasonal MagicShots.

You will typically find PhotoPass photographers lined down Hollywood Boulevard, in front of Mickey & Mickey’s Runaway Railway and staked around the Echo Lake area.

Some of the MagicShots available include a snow globe, mistletoe, an elf hat, a JOY prop sign and Santa's nice and naughty list. Don’t be afraid to politely ask your photographer if you have a specific shot in mind.

Some of the cutest holiday treats this season can be found at this holly-jolly park. 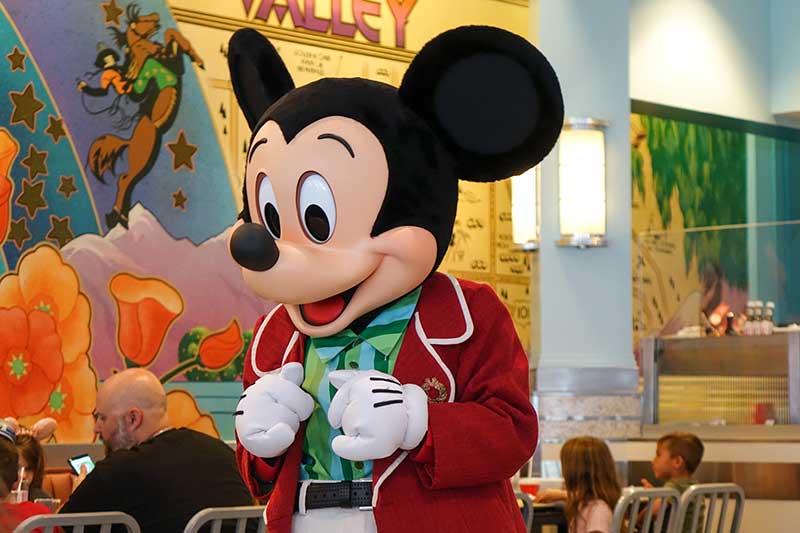 Minnie Mouse is hosting a yuletide gathering for all her friends at Hollywood & Vine, typically held from early November to early January. Santa Goofy joins the celebration, along with Minnie, Mickey and Pluto in their holiday best. They are only available during lunch and dinner times (the Disney Junior Pals are at breakfast), so double-check your reservation time to confirm you have the right character experience. Check out our frog family foodie review for more details!

It wouldn't be the holidays without some festive food and drinks, right? Take a look at the treats available in the 2022 season (unless otherwise noted, the following items will be available from Nov. 8 to Jan. 1) : 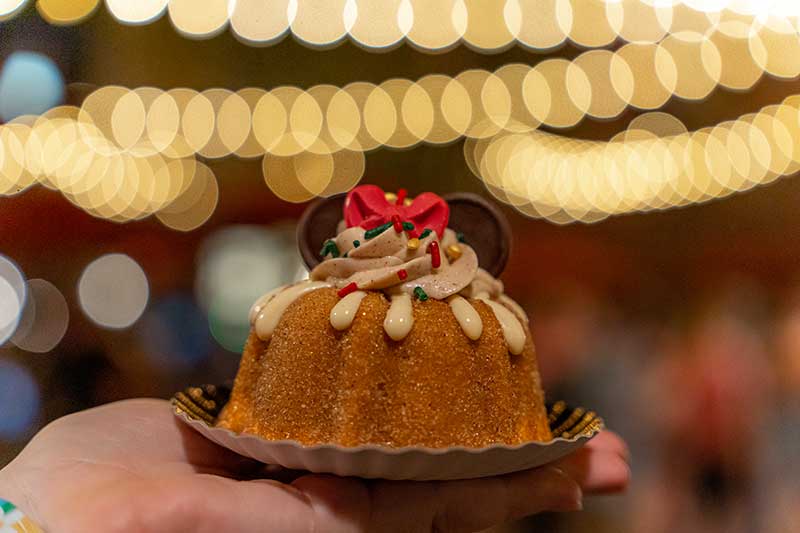 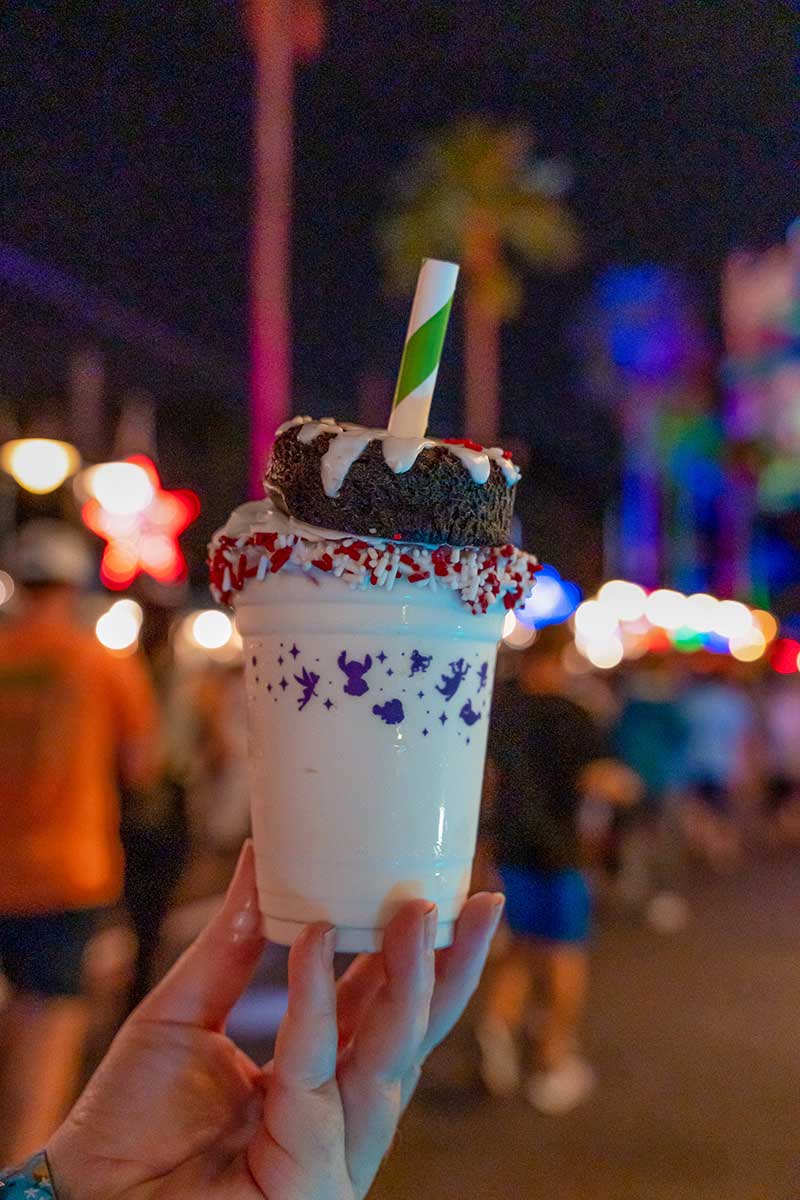 Have questions about Disney's Hollywood Studios or any of the Walt Disney World holiday events? Share them in the comments below! Ready to visit this holiday season? Pick the best dates to visit using our Orlando Crowd Calendar. Check out our Orlando planning timeline for a stress-free family vacation.