What to Expect at Disneyland's Diamond Celebration

Hard to believe, but Disneyland will be 60 years old this year! Since the first big announcement of what all the grand Disneyland Resort Diamond Celebration would entail, we've been keeping tabs on all of the little — and some very big! — details. While some of the resort elements are already in place, such as the sparkling castle, many more changes are happening in the parks in anticipation of the official kickoff. May 22 is the big day and will be marked with a 24-hour celebration at Disneyland Park! The 24-hour event will begin at 6 a.m. that Friday, and will feature special character guest appearances in addition to all of the Disneyland Resort Diamond Celebration entertainment offerings outlined below. While there is no official end date to the celebration, it is expected to continue at least through the end of the year. 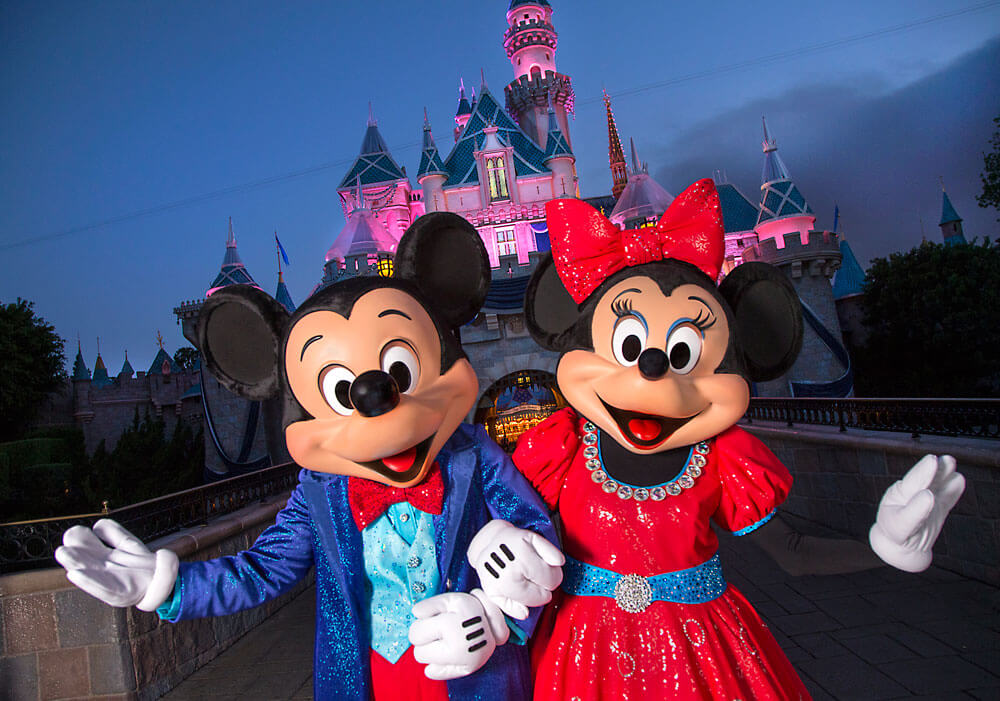 Your favorite mice, Mickey and Minnie, plus their pals Goofy, Pluto, Donald Duck, Daisy Duck, Chip and Dale are getting dapper new duds for the Disneyland Resort Diamond Celebration. Guests will get to see them all in Town Square on Main Street U.S.A. throughout the celebration. 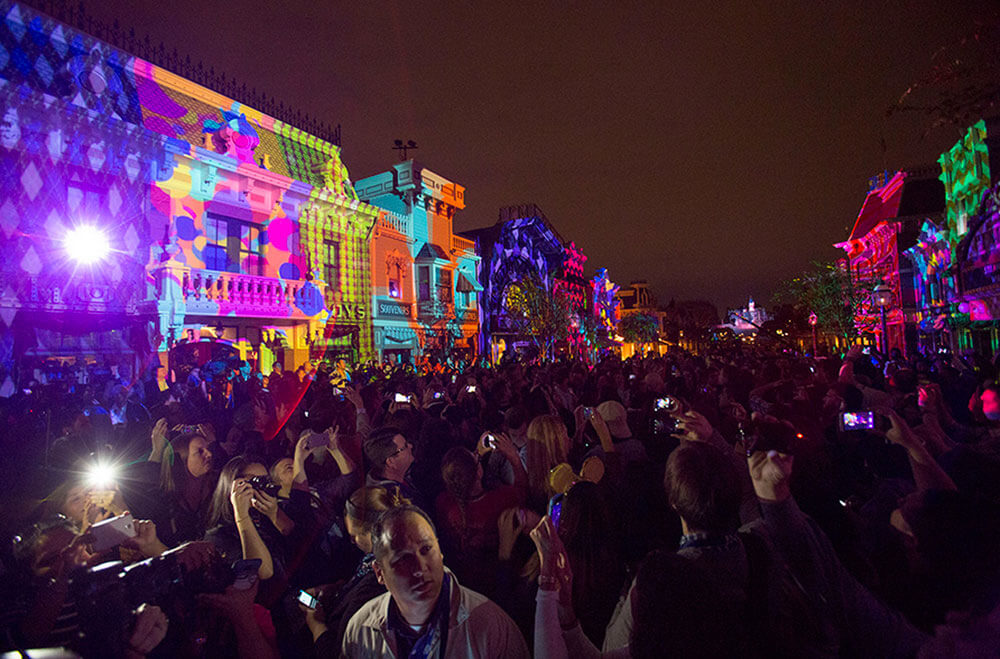 Calling it a fireworks show wouldn't even come close to doing "Disneyland Forever" justice. This street-to-sky experience will feature sparkling pyrotechnics, immersive projections, and other effects that transform Disneyland park right before your eyes! When it opens "Disneyland Forever" will be the largest installation of projection mapping technology in a Disney Park. The shops along Main Street U.S.A., Sleeping Beauty Castle, the Matterhorn, "it's a small world" and the mist screens on Rivers of America will become the backdrop for scenes from Disney favorites such as "Peter Pan,"  "The Jungle Book," "Under the Sea," "Tangled" and "Finding Nemo." Nemo will just keep swimming over Sleeping Beauty Castle, while the Matterhorn becomes Mt. Wannahockaloogie. 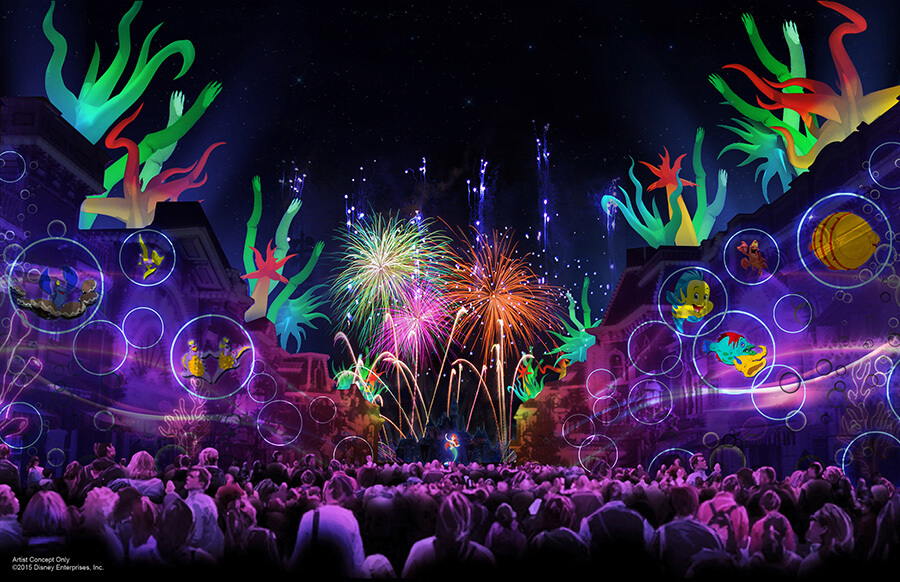 According to a press release from Disney:

"One minute they will be standing on Main Street, U.S.A., and the next they could be stampeding across Simba’s Pride Lands, dancing with King Louie from 'The Jungle Book,' traveling 'Under the Sea' with the Little Mermaid, flying over London with Peter Pan, dripping in honey with Pooh in a whimsical dream of heffalumps and woozles, or quivering as Queen Elsa brings a glimmering blanket of snow over Disneyland."

"We want to make the whole park the canvas, and our goal is to literally use the park to envelope all of our guests in a warm hug," said Staggs of "Disneyland Forever" during an after-hours presentation in January. "Disneyland Forever" will also include two original songs, the theme "Live the Magic" and "Kiss the Night," written by Richard Sherman and to be performed by Ashley Brown. 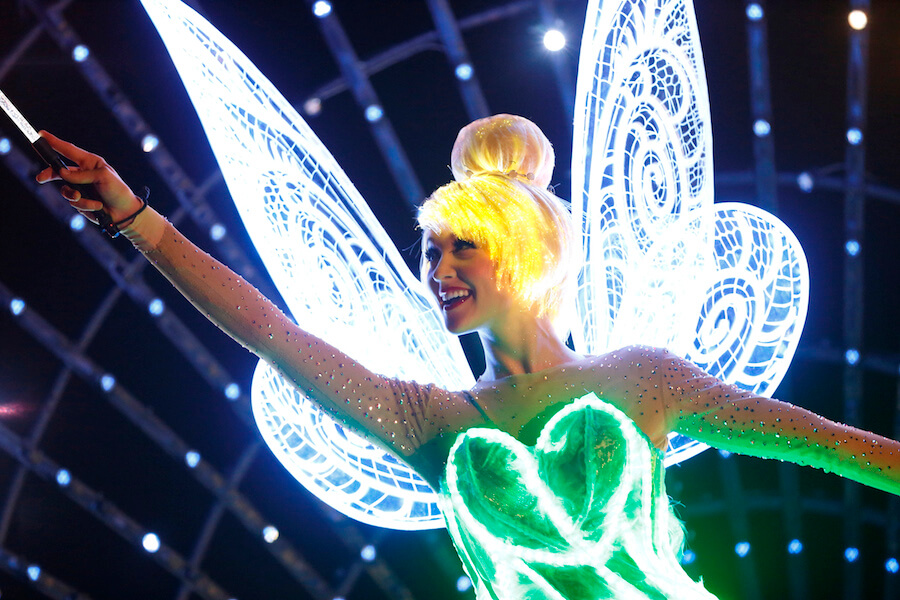 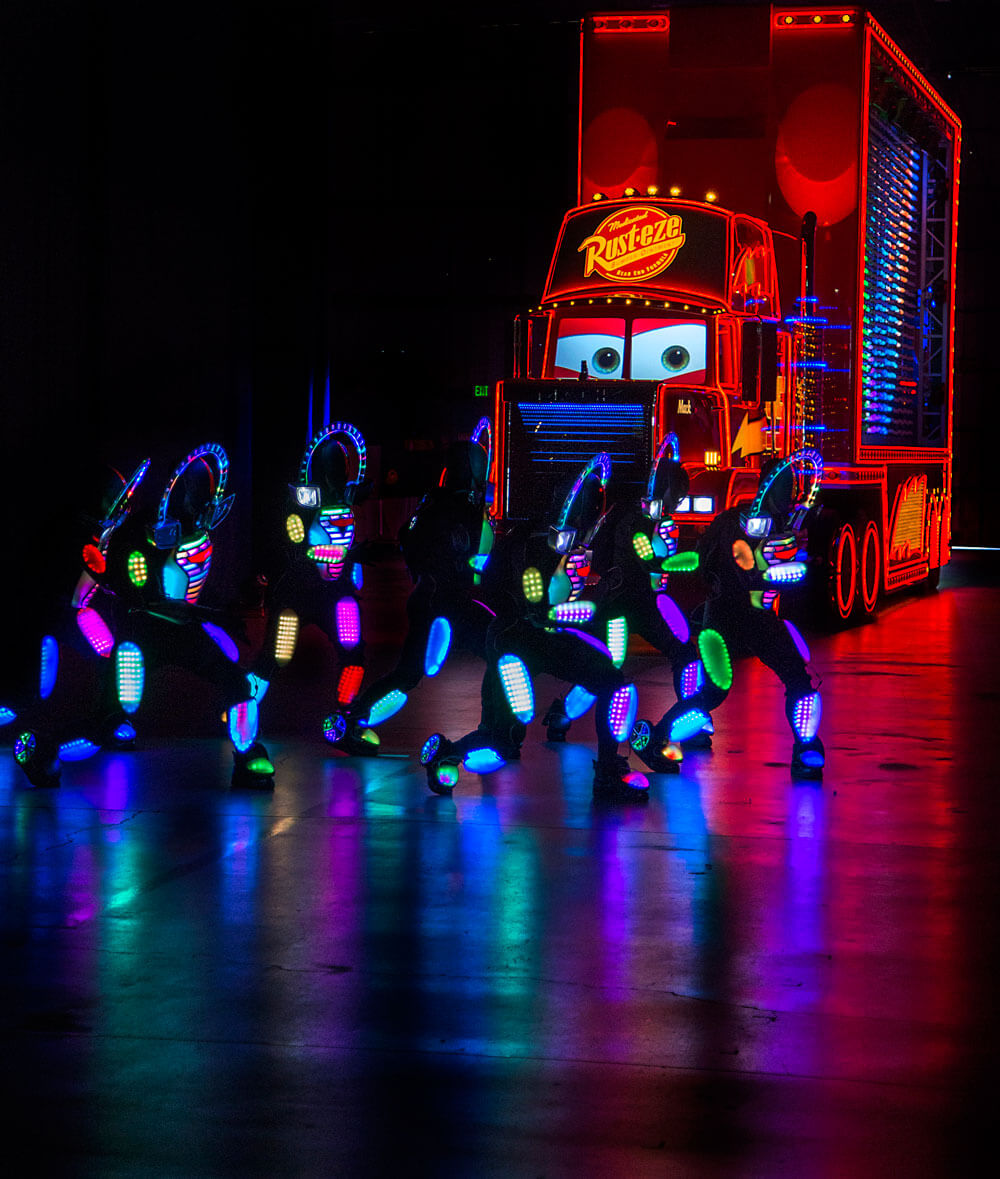 Also starting May 22  is one we've heard rumors of for several months. The "Paint the Night" Parade, which made its original debut at Hong Kong Disneyland, is headed to Disneyland Park! It will include a few nods to the classic "Main Street Electrical Parade, including a new drum float leading the parade and the tip of Tinker Bell's magical wand.

Mickey Mouse has harnessed the power of Tinker Bell's pixie dust to "Paint the Night" in this brilliant parade, which includes more than 1.5 million LED lights for the floats, costumes and special effects. The parade includes characters from "Monster's, Inc.," "Cars," "Toy Story," "Beauty and the Beast," "The Little Mermaid," "Frozen" and more! Accompanying the parade is the song "When Will I See You Again" by Owl City.

"World of Color — Celebrate! The Wonderful World of Walt Disney" 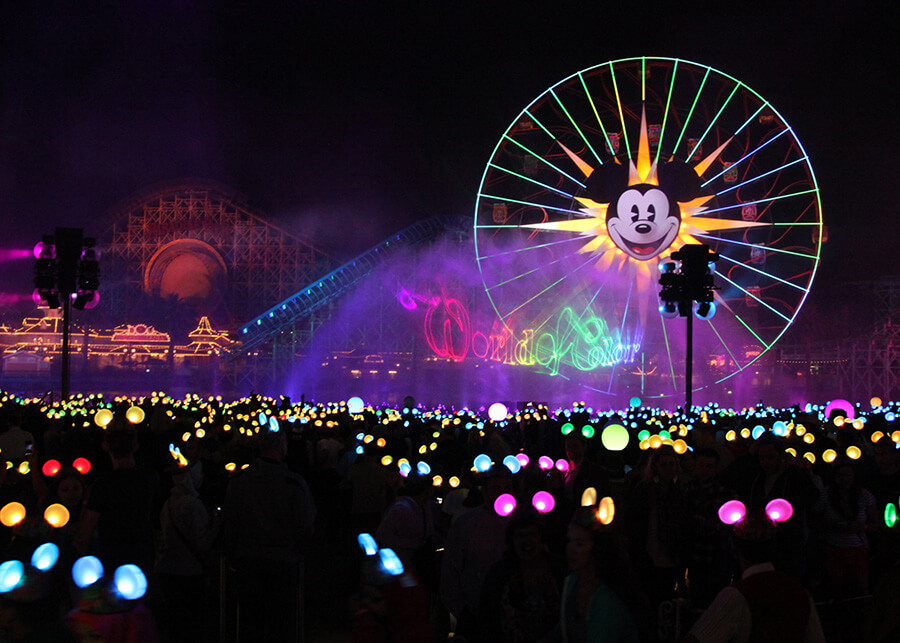 "World of Color," Disney California Adventure's popular nighttime water and lights projection show that takes place at Paradise Pier, will debut a special edition during the celebration. "World of Color — Celebrate! The Wonderful World of Walt Disney" will pay homage to Walt Disney and his dream of Disneyland. Through live-action footage, fountains, lasers, special effects and music, Mickey Mouse will take guests back in time through Disney's memorable animated moments. Award-winning actor and big-time Disney fan Neil Patrick Harris will appear in multiple film sequences with Mickey Mouse as hosts of the show. 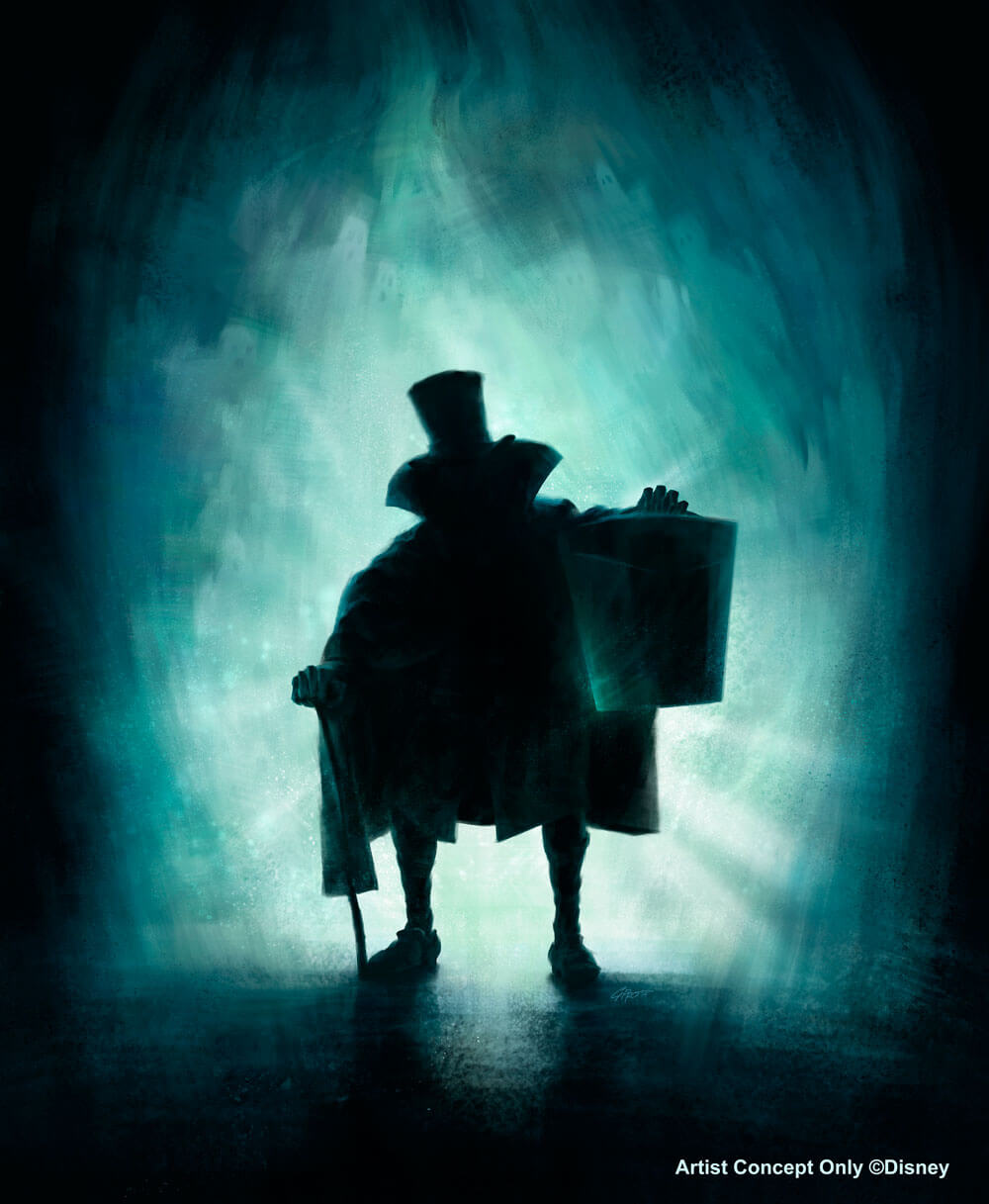 Haunted Mansion, Peter Pan's Flight and Matterhorn Bobsleds, which are currently undergoing refurbishment, are set to reopen with enhancements to these classic rides. Perhaps the most exciting for Disney fans is the return of the Hatbox Ghost. This legendary ghost disappeared almost as quickly as he appeared in the attic during the ride's opening in 1969, and he has been part of Disney legend ever since. For the celebration, the ghost will be back to haunt guests.

While details about the special effects on Peter Pan's Flight are scarce, we know that there will be a reimagined nursery scene. For the Matterhorn Bobsleds, the Abominable Snowman is set to make an appearance! 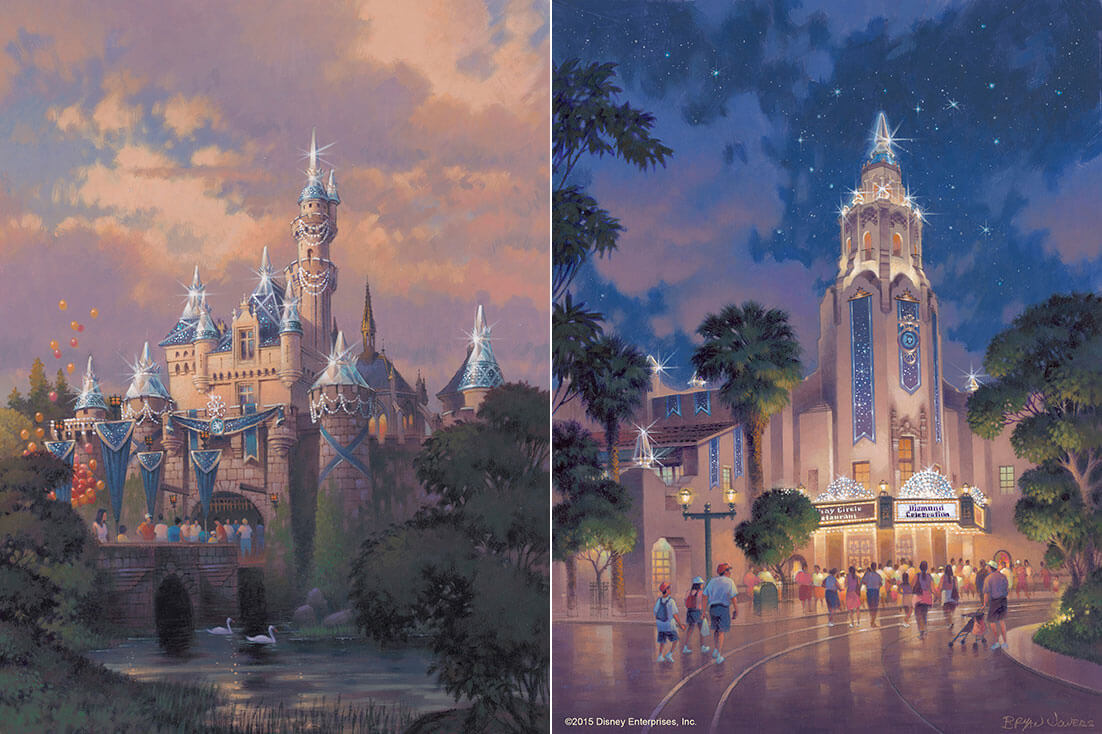 Both Disneyland and Disney California Adventure will sparkle with Disneyland Resort Diamond Celebration decor and festive banners. The crown jewels of each of the parks are Carthay Circle Theatre in Disney California Adventure and Sleeping Beauty Castle at Disneyland. Work has already been done on Sleeping Beauty Castle for its magical transformation, and it now sparkles with thousands upon thousands of diamonds and crystals — some as large as 24 inches — that were placed by hand. By day, it sparkles in the sunlight. At night, it will be lit up by thousands of twinkling lights. 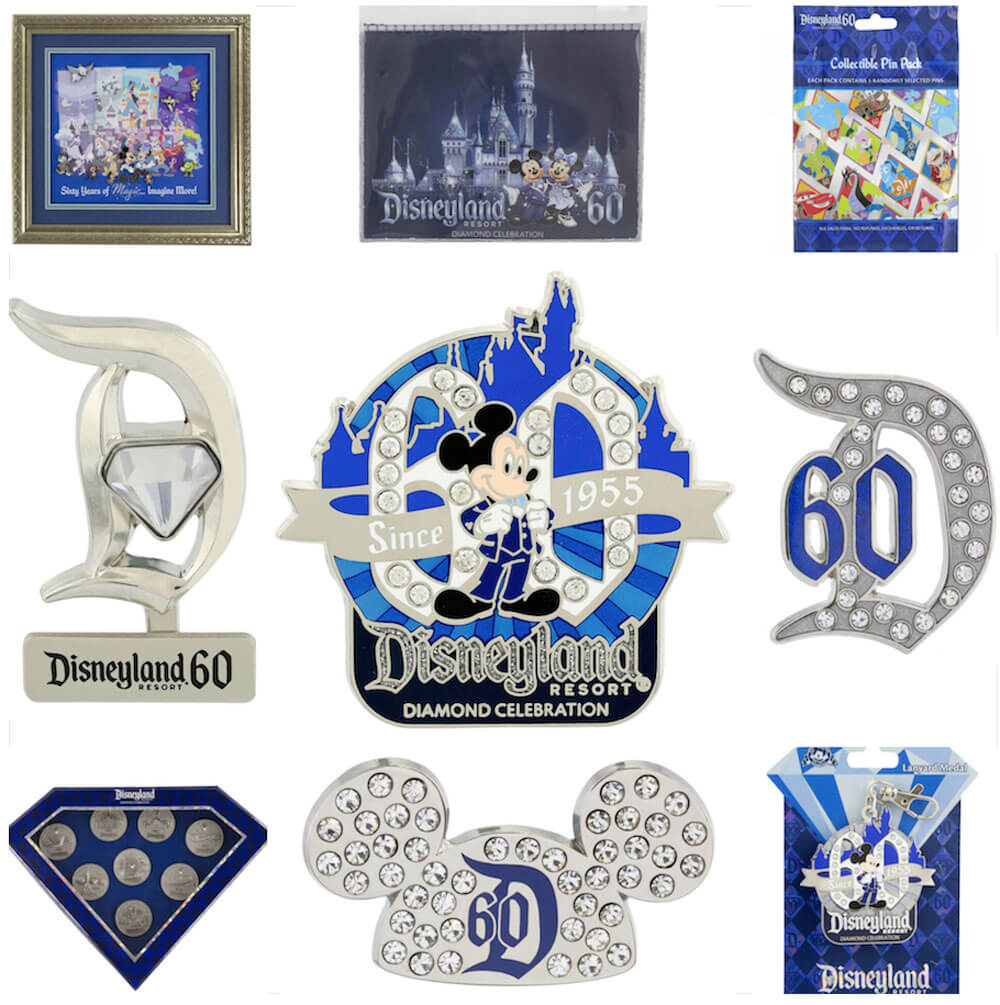 For the collectors and shopping fiends among you, Disneyland is rolling out an incredible assortment of Diamond Celebration merchandise, including art, pins, jewelry, toys, purses and, yes, "crystal" Mouse Ears! If you're looking for a more personal, affordable souvenir, there will be several coin presses themed to the anniversary. Most coin presses also offer a collector's book that you'll want to pick up as well!

The Mad T Party is set to return to Disney California Adventure after dark in the "Diamond Mad T Party," with new decor, food and drinks, and dancing. 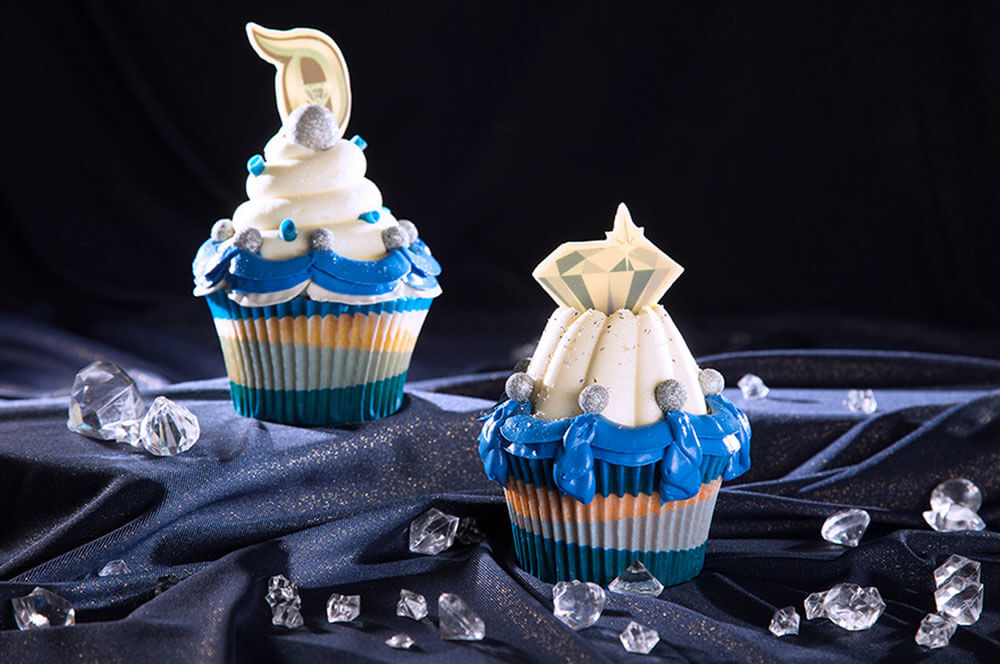 Last but not least, you will find some special eats and drinks throughout the parks, including a Disneyland Resort Diamond Celebration cupcake for each of the parks, a lemon-flavored cupcake representing the Victorian-era theme of Main Street, U.S.A. from Jolly Holiday Bakery and an orange-flavored cake representing the 1930s theme of Buena Vista Street from Fiddler, Fifer & Practical Cafe.

Without a doubt, this is the year to make a trip to Disneyland! Are you as excited about the Disneyland Resort Diamond Celebration festivities? Let us know what you are most looking forward to in comments below.