Going the Distance at Disney's Princess Half Marathon 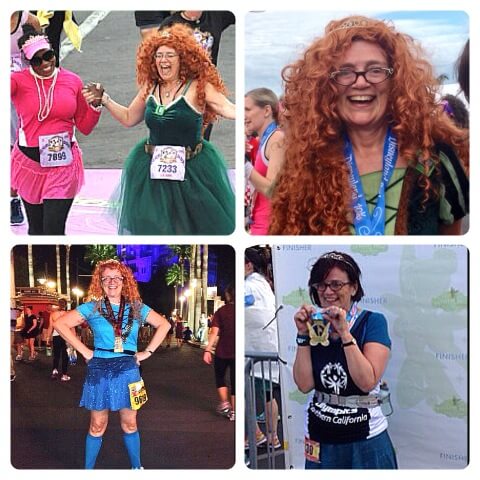 One year ago I ran my very first runDisney race and little did I know that this 5K race would be the beginning of a path that would lead me to the West Coast and back, running not one but two half marathons within six weeks' time.  Not that I had been idle in between. After the 5K I had decided that while visiting my son in Los Angeles in August that I would try out a 10K race, and eventually I cranked it up a notch, running the Twilight Zone Tower of Terror 10-Miler held in October back in Orlando. One thing led to another and before I knew it I was back in Los Angeles running the Tinkerbell Half Marathon this past January. 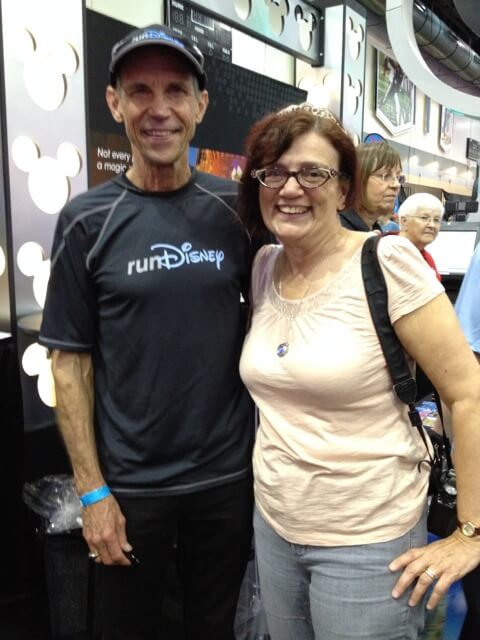 Having come full circle I was back in Orlando for Disney's Princess Half Marathon and headed first to Expo for package pickup and some serious running gear shopping. I stopped at the Disney booth for a meet-and-greet with Jeff Galloway, the American Olympian now official runDisney training consultant. I have followed his running prep programs and advice ever since my first race and I am a firm believer in his run-walk-run method. I highly recommend it. 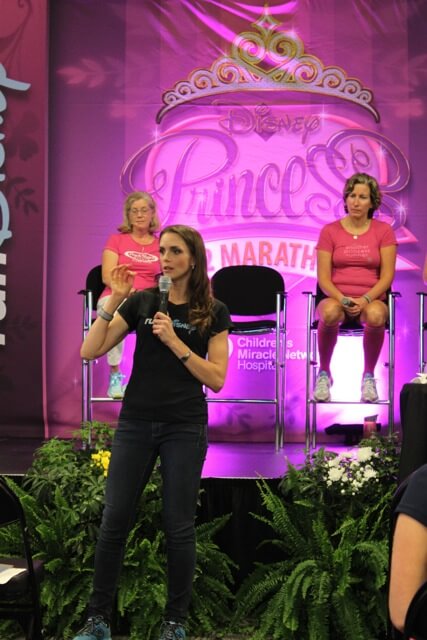 Expo was held at ESPN Zone and while busy it did not feel crowded. I attended the ‘ I Can Get the Distance!’ lecture by Jeff Galloway and the presentation of  ‘Tips and Tricks to Prepare for Race Day’ with Disney’s nutritionist Tara Gidus, who was joined by Co-Owner of Track Shack Events, Betsy Hughes. Also on the panel were Dimity McDowell and Sarah Bowen Shea of Mother Runner. I particularly loved the Q&A session held at the end of both sessions. 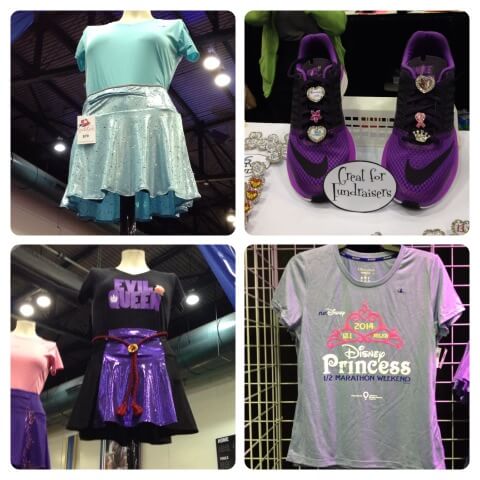 The race merchandise was in high demand and some items were already not available anymore on the second day of Expo. The special Dooney & Bourke Princess Half bags had flown off the shelf with none even to look at by the time I got there. There was not a lot of choice left at the New Balance booth either, but I got lucky and did get one of the last pink Coast to Coast shirts I badly wanted. I had resisted buying the shirt last month at the Anaheim Expo but wasn’t going to let this happen again. While I am a diehard Merida fan, I saw some really great "Frozen" and villains-inspired running gear and great T-shirts with fun messages. 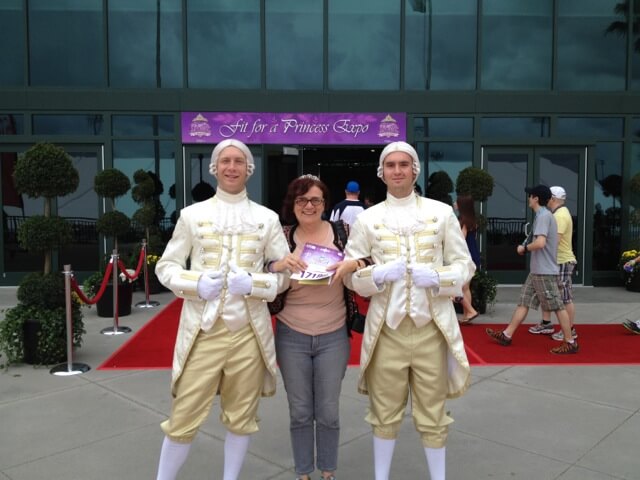 There were plenty of picture opportunities at EXPO, but I was most taken by the royal gentlemen welcoming all princesses to this year’s event. Race bib and shopping in hand, I returned to my hotel to prepare for the big day. Once my running gear was laid out for the next day, I decided on a light meal and an early bedtime. No pasta in the park for this princess but plenty of rest. 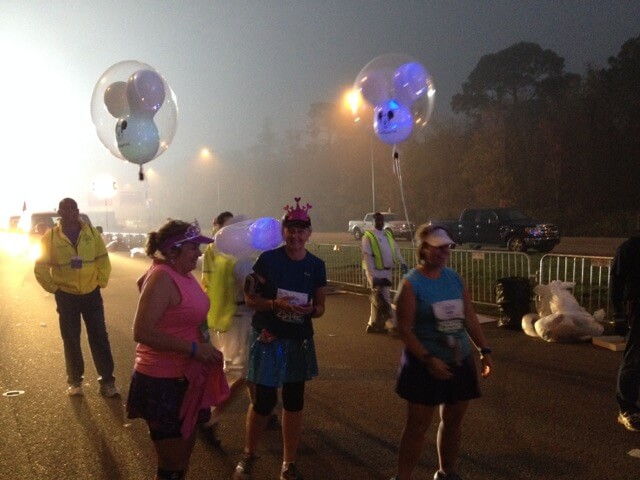 At the crack of dawn, I was up and running! I had missed the deadline for proof of time and I was in Corral P, the last corral. It did not bother me one bit, and for the first time ever I got to see the dreaded ‘balloon ladies’ who were positioned at the end of Corral P. The balloon ladies are the sweepers who make sure runners maintain the minimum pace of 16 minutes per mile and take you out if you don’t. We were sent off with fireworks and cheers just as well as if we had been in Corral A. 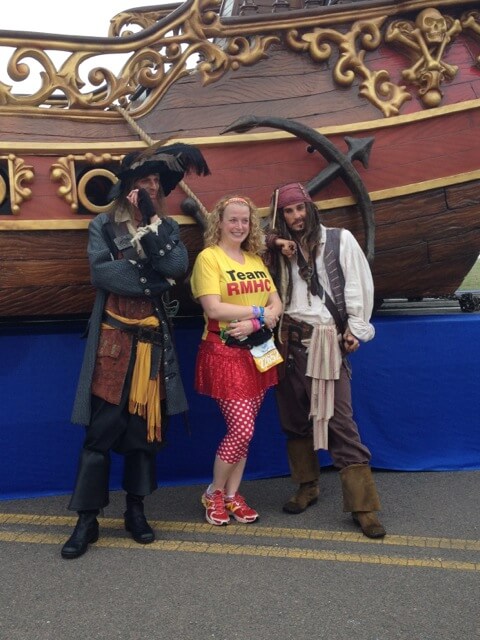 The first two miles flew by and soon we were treated to some legendary Disney entertainment. Captain Jack Sparrow was waiting in front of the Pearl, and needless to say that quite a few princesses followed their pirate heart and stopped for picture taking. 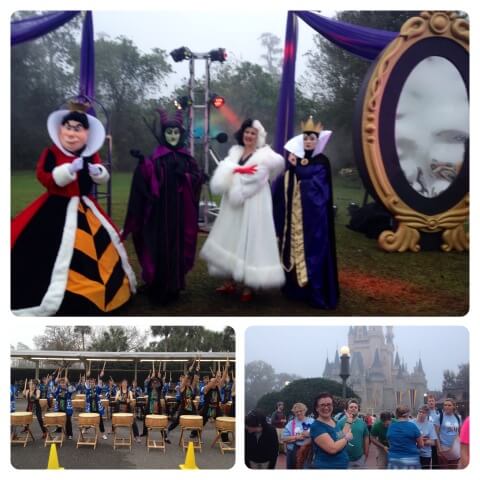 Villains and Japanese drummers surprised us along the route toward Magic Kingdom Park. I had run through Epcot and Disneyland before but never through Magic Kingdom Park. Running through it gave me just the boost of energy I needed. Reaching Main Street was fabulous, but nothing compares to reaching the central hub and seeing the castle. Like so many other runners, I had to stop for a picture in front of Cinderella’s home. 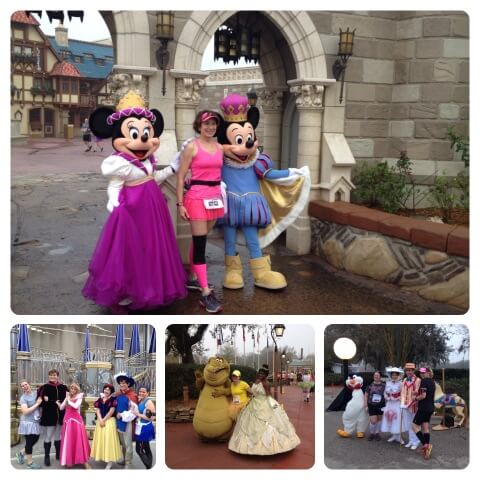 I knew a long way back to Epcot lie ahead but seeing all the characters inside the park made me -- at least for the moment --  forget about that part. Mickey and Minnie in their royal outfits waited for us in Fantasyland, and trumpets sounded from Cinderella’s Castle when we launched through it. Snow White and Princess Aurora, joined by their princes, greeted runners. So did Princess Tiana and Mary Poppins. 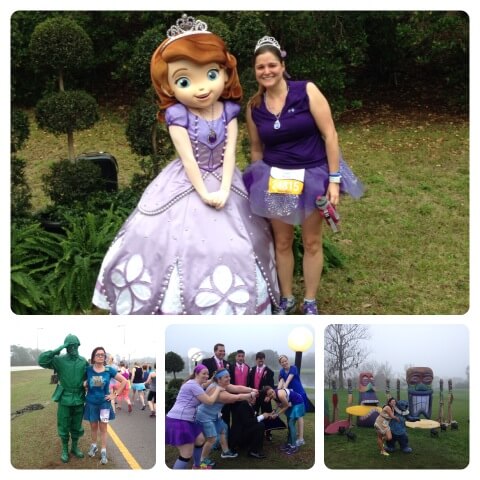 Soon we were back on our way to Epcot. In front of Disney's Grand Floridian, Prince Charming had his helpers stationed inviting aspiring princesses to try on a glass slipper; Stitch was waiting at Disney's Polynesian Resort. We passed heroes and Princess Sophia, and a toy soldier pushed us on. Throughout the race wonderful volunteers were cheering and providing water, PowerAde and medical supplies. 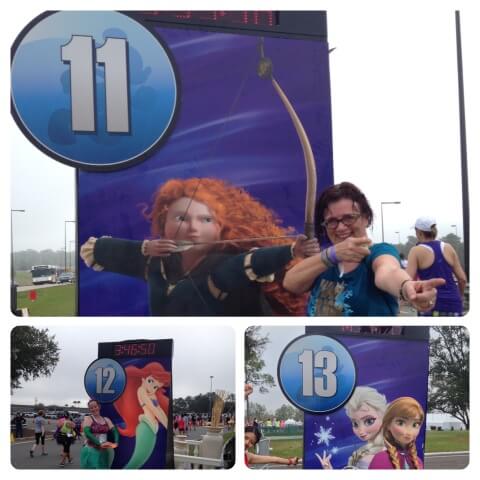 At mile 11 I realized that not only was I going to finish the PrincessHalf but that the coast-to-coast dream was about to come true. It was a great feeling, and for the rest of the race I forgot about the run-walk-run routine. I remembered the past months, the training, the ups and downs, the fears and the great moments.  It was all worth it. I reached the finish line and collected my medals.  I celebrated with friends, and the next day, ignoring my aches and pains, set out visiting all four parks in one day.  After all I was in the Happiest Place on Earth and Mickey was waiting. 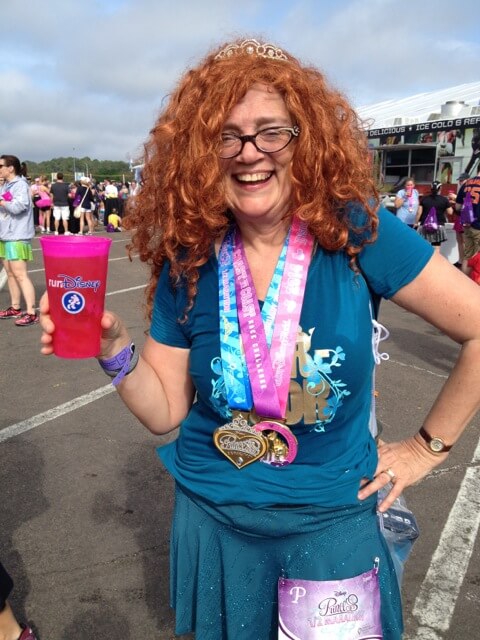 And did I mention the weather? It was wonderful to leave the cold winter of New York City behind for a while. I take 75 degrees Fahrenheit any day and can’t wait to be back two weeks from now. You probably are thinking, "What, another race?" Well, while I am thinking about a couple of other races, my next visit will be less athletic. Instead I will be reporting about the St. Patrick’s Day celebrations at Downtown Disney and smelling the roses at the Epcot International Flower & Garden Festival.

Liliane Opsomer is the co-author of “The Unofficial Guide to Walt Disney World with Kids,” a guidebook that provides detailed planning and touring tips for a family vacation. She is passionate about travel, Disney, and hobbits. Liliane also started recently her own blog.