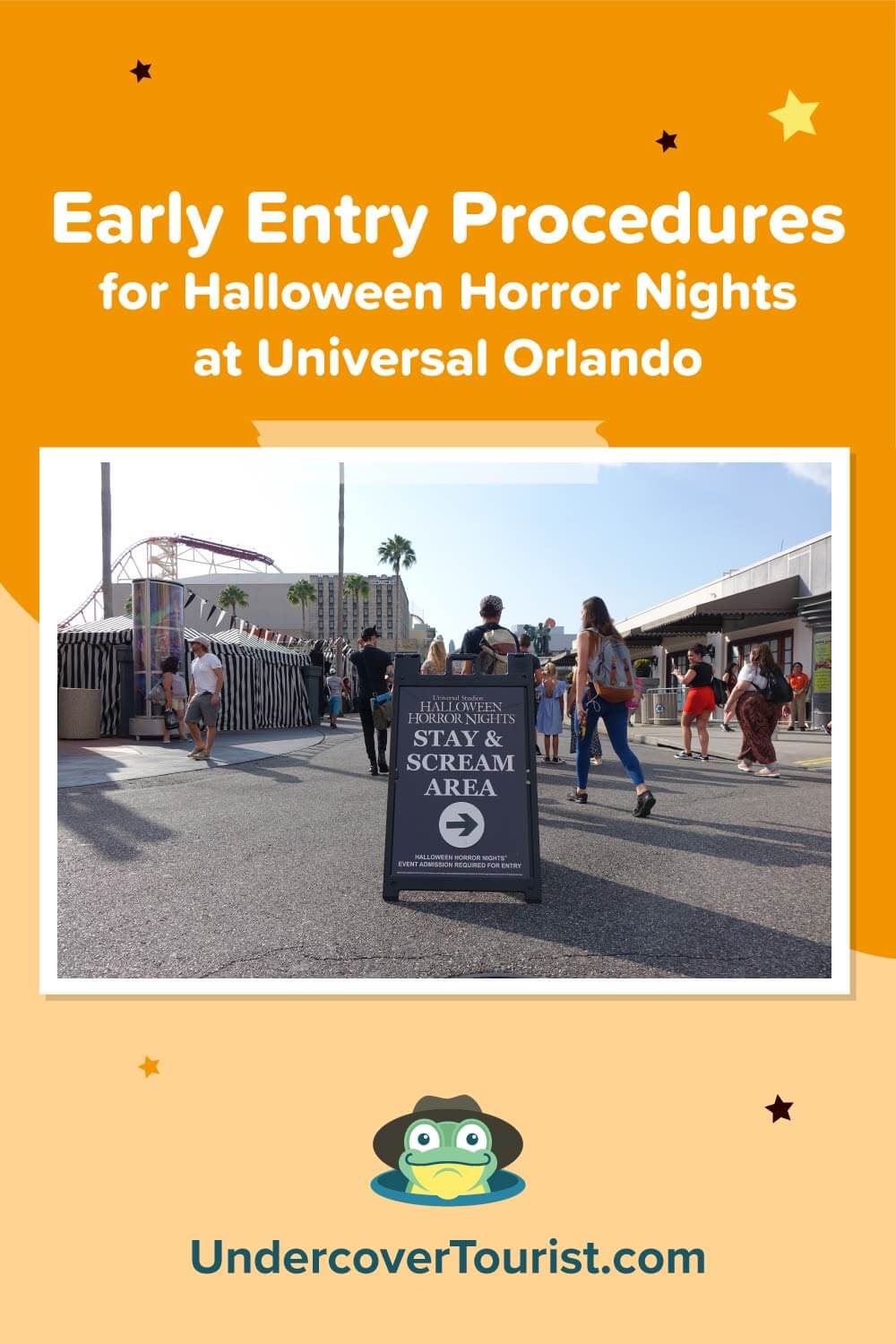 While we have a full guide dedicated to this annual event, we wanted to spend a little bit of time explaining the ins and outs of early entry and how to get it. Taking advantage of Halloween Horror Nights early entry requires a little bit of planning and a few decisions. Luckily for you, we're here to outline everything you need to know, including how to get it!

To take advantage of this, we recommend you spend the day at Universal Studios Florida (and Universal's Islands of Adventure if you have a park-to-park ticket) experiencing the best the park has to offer. If you want a little downtime, and for the best jump on daytime crowds, we recommend you arrive at the parks ahead of the official opening, tour for a few hours and then take a break in the afternoon when crowds hit their peak. You just need to be back inside Universal Studios Florida by 5 p.m. which is when the park closes to daytime guests (you can see park hours on our Orlando Crowd Calendar).

If you don't have a regular day admission ticket or an annual pass, you can add on a Scream Early Ticket (available directly through Universal) for $35. This will allow access to Universal Studios Florida, starting at 3 p.m. Then at 5 p.m., you can proceed to a Stay and Scream holding area. 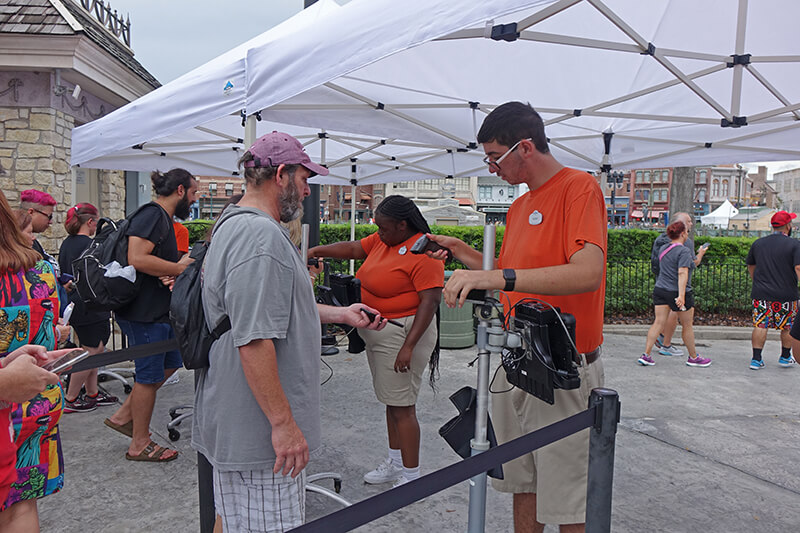 The advantage of the holding areas is that they put you in a prime location for a number of houses! Plus, your specific holding area allows you early access to at least one house, sometimes two or even three, before the event officially starts at 6:30 p.m. In our experience this year, a couple exceptions for low waits were Beetlejuice and the Haunting of Hill House, which started with 45- to 60-minute wait times, even for those who waited in a holding area for them. With up to five holding areas open, it can be tough to make a decision based on which houses are your top priorities. Keep in mind that the houses farther back typically maintain short wait times within the first hour (or more!) of the event ... however, they're just as amazing as the houses in the front!

These holding areas are subject to change at any time, so please be aware that they may not all be in operation during your visit ... or may open to different houses than those listed. Always verify with a team member before committing. Our best advice is to check when you get to the park to confirm which holding areas are open.

Another important thing to keep in mind is that the early opening time isn't always consistent. We've been released as early as 5:40 p.m. or as late as 6 p.m. While this may sound like just a small difference, you'll want to make sure your party is together and ready to go by 5:30 p.m. just to be safe.

Note that while in the holding area, you may need a ticket in order to go to the restroom and return to your spot. With that being said, we highly recommend you purchase any desired outside food and beverages prior to entering and enjoying them while you wait!

These are the Halloween Horror Nights early entry holding locations in 2022:

New York (Finnegan's/Revenge of the Mummy) 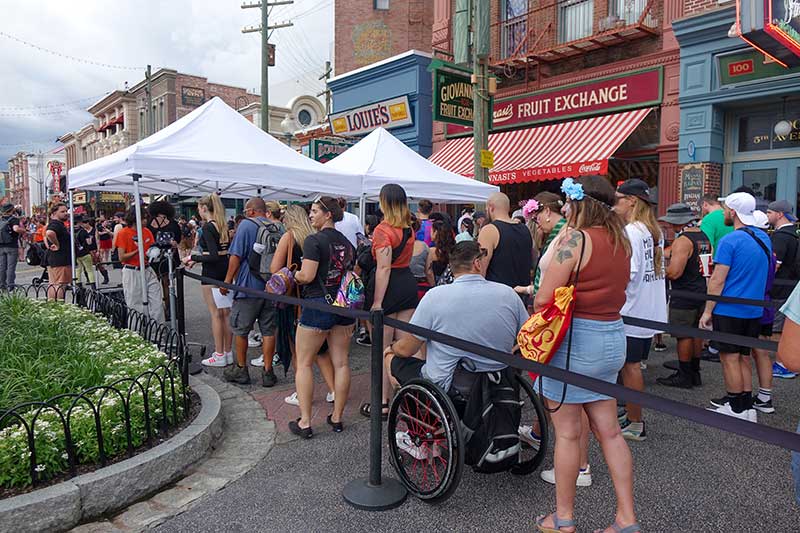 Located in the New York area of the park across from the Revenge of the Mummy, Finnegan's Irish Pub is unofficially considered the primary holding area. Finnegan's opens up to Halloween and Spirits of the Coven. When I pictured Finnegan's as a holding area, I thought it was just the restaurant and bar itself. Boy, was I wrong! This holding area fills a ton of outdoor space in the streets of New York. There are drink carts and food options available. You'll need to enter this holding area over by Starbucks and Louie's. 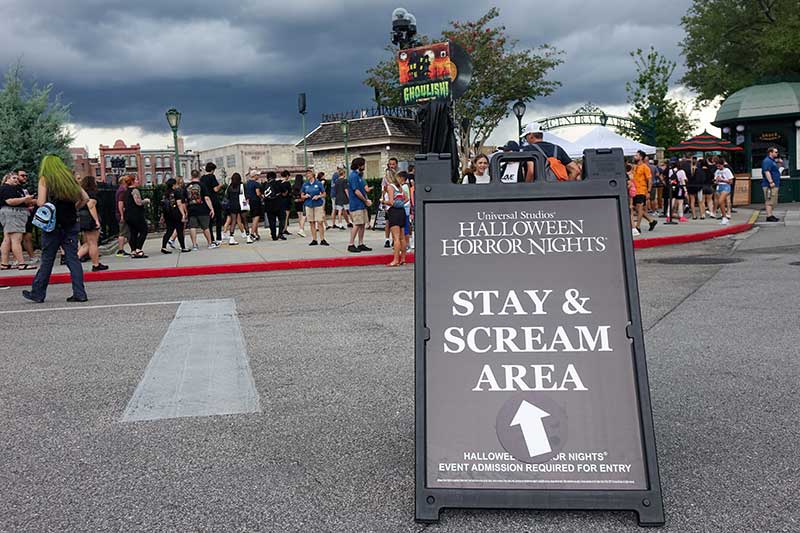 This holding area is actually divided into two different queues, so it can get pretty confusing. You enter through the Central Park entrance across from Mel's Drive-In. By the time we arrived (it was closer to 5 p.m.), the more popular queue for The Weeknd: After Hours Nightmare and Universal Monsters: Legends Collide was already long. So, if these are top priority houses, you'll want to enter this holding area much earlier than 5 p.m.! The queue snakes with switchbacks, taking up the majority of Central Park and spilling out into KidZone.

If you arrive after it has reached capacity (or if you want to start with the houses in the very back of the park), you'll be directed to the second queue in the holding area, which leads into Springfield and grants access to Bugs: Eaten Alive and Descendants of Destruction. Dining options in the Simpsons area, including Bumblebee Man's Taco Truck, Lard Lad Donuts and Duff Brewery, are open if you want food or drinks.

This is a brand-new Stay & Scream location this year. Richter's Burger Co. and Chez Alcatraz are located in San Francisco across from Fast & Furious - Supercharged, which houses The Horrors of Blumhouse.

The TODAY Show restaurant at the front of the park is used as an overflow location. It usually only opens if the other holding areas reach maximum capacity. If you're directed to this holding area, you'll be released after the others are released, but you'll be closest to Hellblock Horror and Spirits of the Coven. The TODAY Show location also offers decent access to The Weeknd: After Hours Nightmare and Universal Monsters: Legends Collide, but because those are two popular houses, we wouldn't go over there directly until the line lessens a bit.

The main catch for this holding area is that you can't necessarily plan on being here, since it depends on if and when the other areas fill up — which is more likely on Friday and Saturday nights. 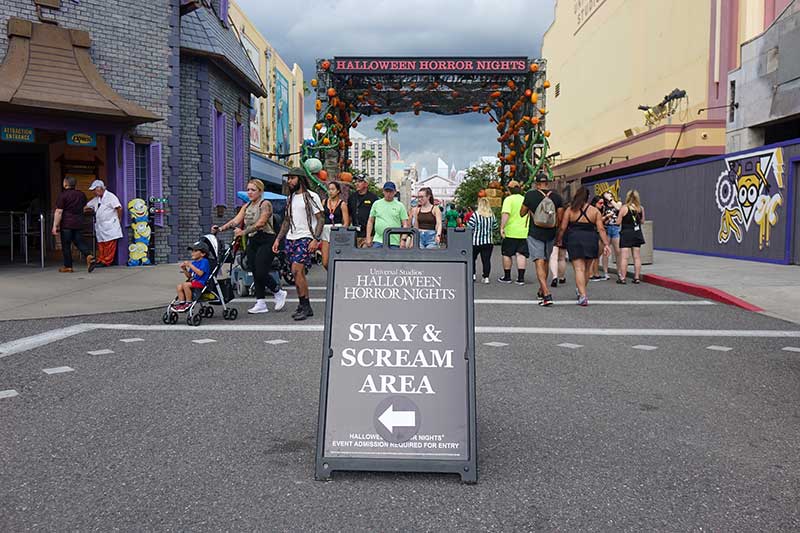 In 2022, we checked out the Halloween Horror Nights early entry procedures on opening night. We arrived at the park around 4:45 p.m. and headed toward the Central Park holding area. There was a long line to get in, but it went quickly and we were inside the holding area right around 5 p.m. 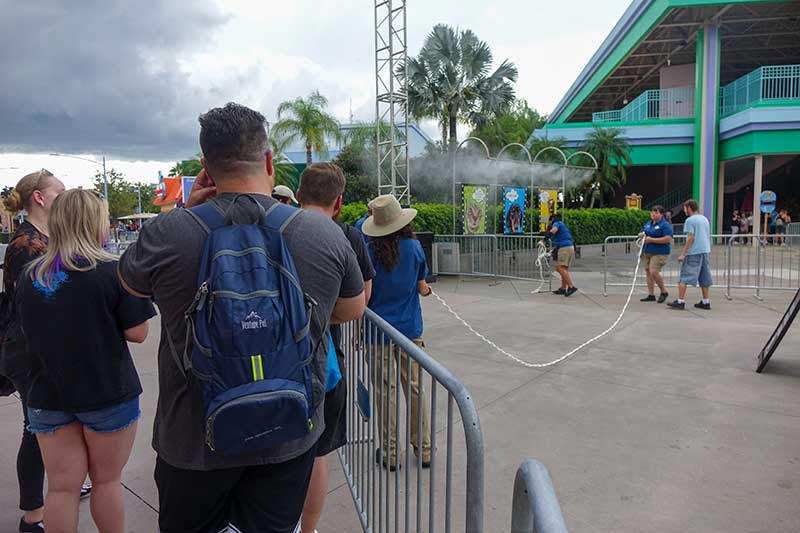 It may have just been an opening night mishap but we were pretty confused about which queue we were entering. Last year, team members held signs and had distinct queues for the houses behind KidZone and the houses beyond Springfield near Men in Black. This year, we ended up in the queue for The Weeknd: After Hours Nightmare. It was one of the most highly anticipated houses, so it had a longer queue (which started moving at 5:45 p.m.) and took up our entire early entry time. We were out of the house by the official opening time at 6:30 p.m. Had we queued for the houses further in the back by Men in Black, those houses opened at 6 p.m. but had lower initial wait times ranging from 5 to 30 minutes through 6:45 p.m.

By the way, it can be very difficult to walk through a house when it's still light outside because your eyes don't adjust right away, making it seem much darker. Mommy Frog was in front of me leading the way (ladies first, right?). She went in the opposite direction because she couldn't see and ran into the wall. I thought it was hoppin' hilarious, but she thought it was just as bad as a jump scare and made me go first.

If you've purchased Express Passes, we don't recommend using them during the early entry timeframe since the wait times are relatively short (depending on which one you go to). Save them for later when the lines are longer and you can go through those houses twice! We had decided to wait 45 minutes for The Weeknd house, which ended up being one of the lowest waits of the night for that house aside from the last hour. Then later, we went through it a second time with our Express Pass. 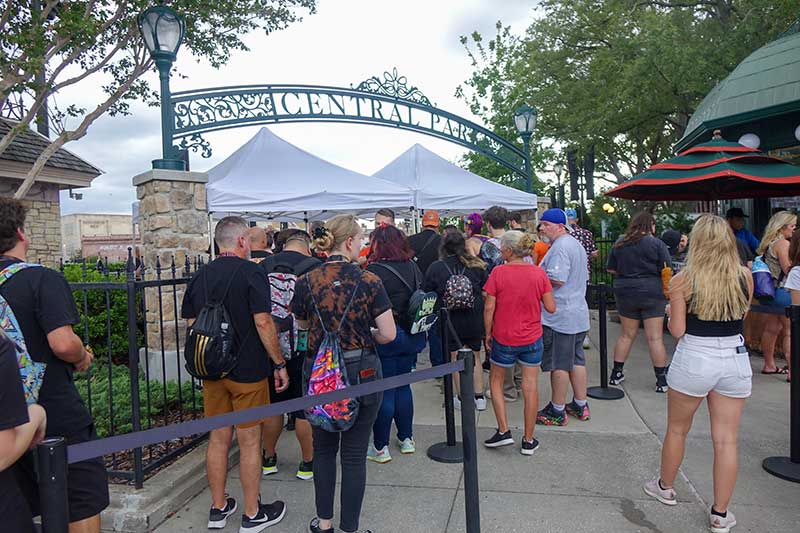 Go to the New York holding area if ... Halloween and Spirits of the Coven are at the top of your list. Afterward, you can also hop in line for Fiesta de Chupacabras and Dead Man's Pier: Winter's Wake, both of which open at 6 p.m.

Go to the Central Park holding area if ... either The Weeknd: After Hours Nightmare or Universal Monsters: Legends Collide is one of your must-dos. Get there early and still expect to wait a while. Also if you want to get the houses in the very back first (this includes Bugs: Eaten Alive and Descendants of Destruction), head directly to the Springfield area.

Go to the San Francisco holding area if ... you want to hit up the Horrors of Blumhouse first.

If you end up in the TODAY Show or Sound Stage 18 holding areas ... it's a toss-up of either going to the Hellblock Horror or Spirits of the Coven houses first.

Overall, we think early entry inside the holding areas is the best way to get the most out of Halloween Horror Nights for the least amount of money! If you can't use Halloween Horror Nights early entry, definitely be at the gate by 5:45 p.m. (We even saw a small crowd already camped outside the gate when we arrived at 4:45 p.m.) Guests are typically allowed in before the 6:30 p.m. start time — this year, gates opened at 6 p.m.!