Star Wars fans do not have to wait for the annual convention to get their fill of all things galactic as Disney’s Hollywood Studios puts on four fabulous three-day weekends each spring with trivia games, shows, plenty of character sightings, celebrity appearances and special events merchandise. 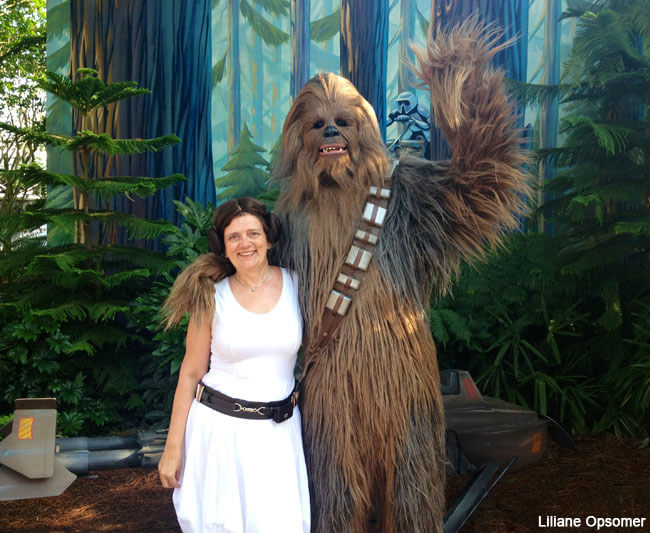 Being a big Star Wars fan myself, I set out clad in a Princess Leia costume to meet characters, get autographs and take tons of pictures. My starship landed at the Disney's Yacht Club conveniently located on the Boardwalk, a short walk or boat ride from the park. I was ready at the main gate at 7:15 a.m. and joined a long line of fans to get a FASTPASS for a celebrity autograph. Little did I know that diehard fans had been camping out there as early as 4 a.m. 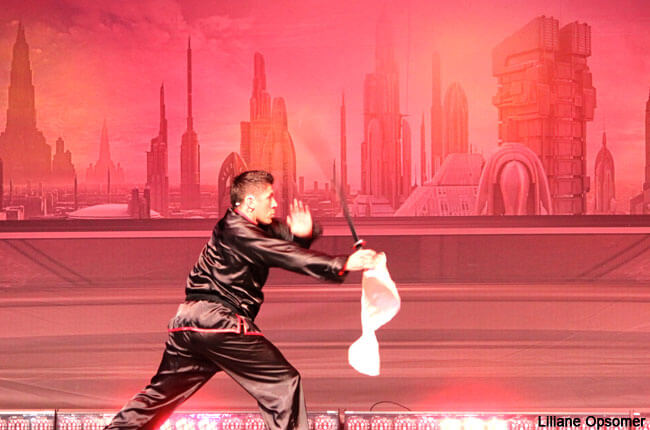 FASTPASS distribution started right of the main entrance at 6:30 a.m., and I did not manage to get a ticket to meet my favorite character, Ray Park, the energetic double Lightsaber-wielding actor playing the villain Darth Maul. I did, however, scoop up a ticket for a meet-and-greet with Ashley Eckstein, the voice behind Ahsoka Tano in "Star Wars: The Clone Wars."  So if your heart is set on meeting a particular actor, there is no way around getting up early and standing in line way before the park opens. 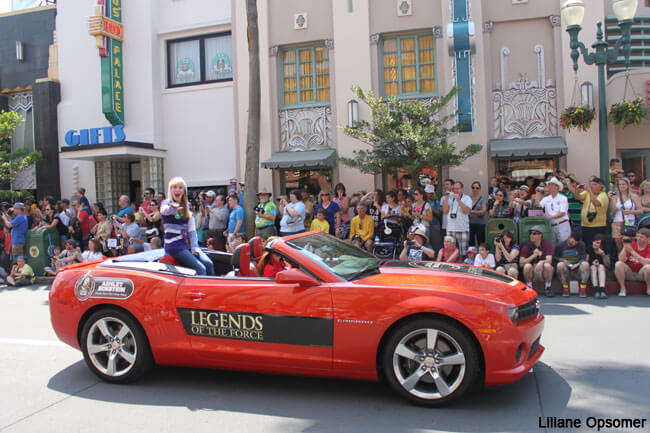 There is only one autograph FASTPASS per guest, and each guest must be present to receive the ticket. The FASTPASS comes with a wristband that must be worn until it is time to meet your celebrity. The FASTPASS ticket has a designated return time, and when your time comes, go to the designated Celebrity Autograph booth located around Echo Lake.  If the sky opens up and it is pouring -- yours truly experienced it -- the celebrities will meet and greet fans indoor right next to The American Idol Experience. When all passes are given out, a limited number of standby tickets are available, but be aware these do not guarantee an autograph. 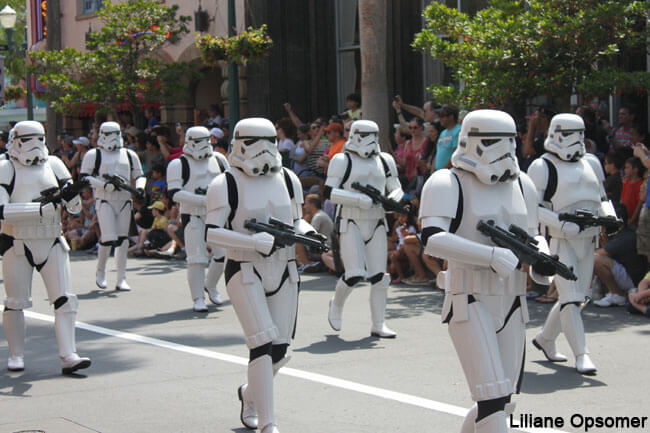 About half of Disney's Hollywood Studios is set up as a theme park, the other half is off-limits except for the not-to-be-missed behind the scenes Studio Backlot Tour. There are of course the iconic rides such as the Twilight Zone Tower of Terror, the Rock ‘n’ Roller Coaster Staring Aerosmith and the park’s hottest ticket Toy Story Mania! For all Star Wars fans, it is, of course, a must to ride Star Tours: The Adventures Continue.  The ride, overhauled in 2011, uses 3-D special effects and has more than 50 combinations of scenes, so each ride is a different experience.  The Studios also boasts fabulous shows such as Indiana Jones Epic Stunt Spectacular!, Lights, Motor, Action! Extreme Stunt Show and the Beauty and the Beast - Live on Stage! At night, the must-see show is Fantasmic! All shows are state-of-the-art entertainment and are in seated, outdoor theaters, providing much needed relief for tired feet. 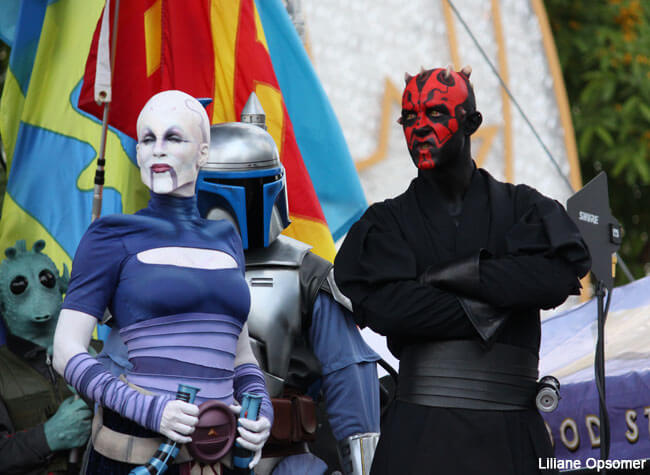 But guests visiting for one of the four annual Star Wars Weekend do not come for the rides that are there year-round; they come to immerse themselves in the saga. Throughout the day, the Premiere Theater is home to special shows revealing the fascinating world of voice acting, special effects and the life and movie-making adventures of Star Wars celebrities. Different shows are shown over the course of the four weekends, and a weekly special Star Wars Weekends map is available upon entering the park that lists all shows, special events as well as the character meet-and-greet locations. 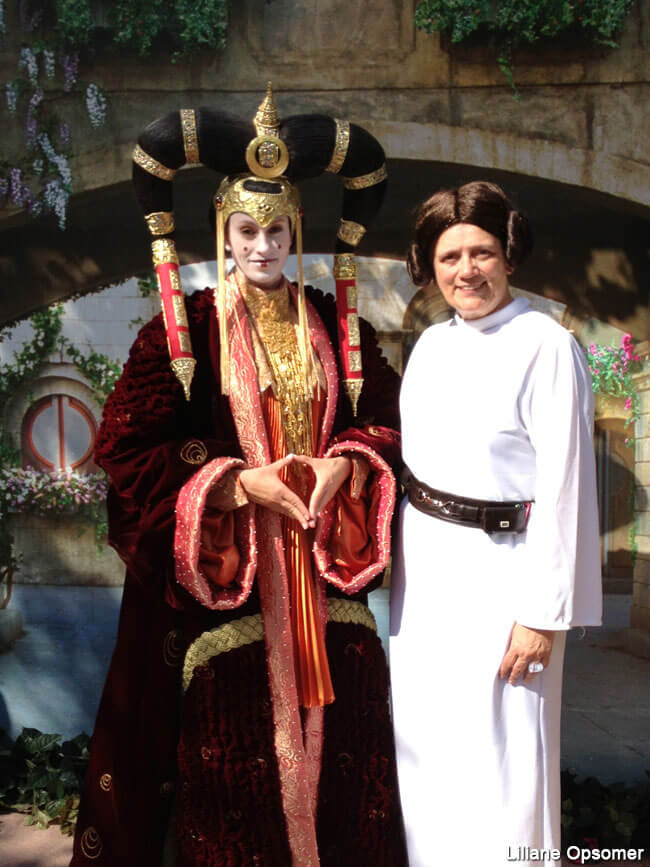 Chewbacca, Princess Amidala, a range of Jedis and Clone Wars characters, Luke Skywalker and Princess Leia and, of course, the evil Darth Maul and Dark Vader are all holding court and signing autographs at seven different locations throughout the park. Even Disney characters get into the act, and there is a Jedi Mickey and Minnie Princess Leia, while Stormtrooper Donald and Darth Vader Goofy have joined the Dark Side. Some characters, such as Darth Maul, are the single occupants of their own special spot; other spots are home to several different rotating characters. Always ask a cast member who you will be meeting before you stand in line. The character you see at the spot might be changing as the line moves on. Cast members have a pretty good idea how long a specific character will be out there before another one comes out. Kids waiting in line for Jedi Mickey may be disappointed if by the time they reach the front of the line Darth Vader Goofy appears. If standing in line is not for you, there are plenty of Stormtroopers, Cantina Band members and Tusken Raiders roaming the park freely at all times. 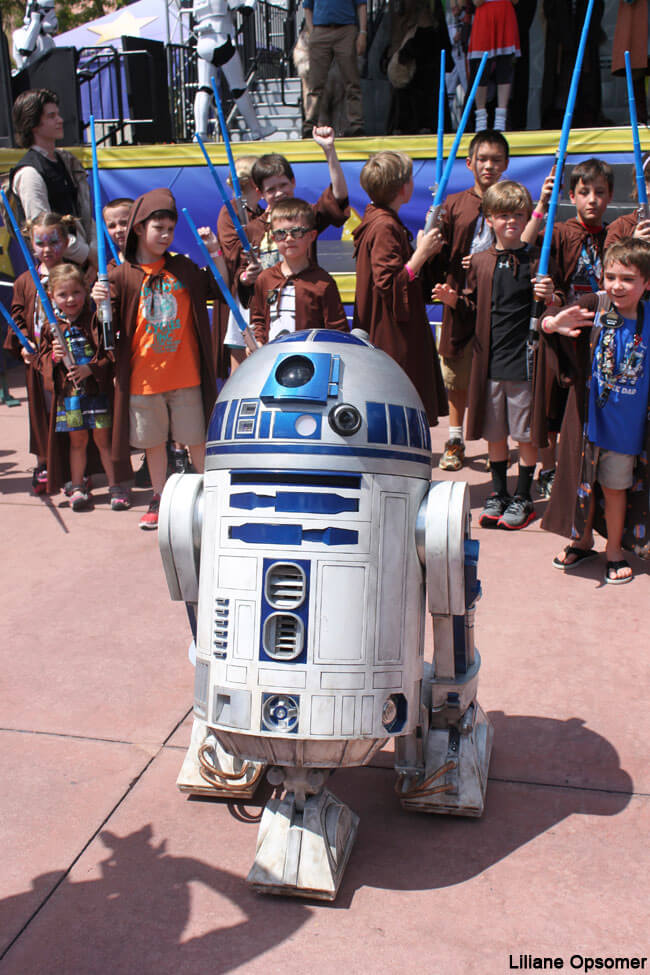 Younglings ages 4 to 11 will have fun at The Padawan Mind Challenge, a trivia game held twice daily at the main event stage. The place to sign up for the game is in front of ABC Sound Studio. If your child is interested in the challenge, sign up upon entering the park, as space is limited. At the Jedi Training Academy next to Star Tours, kids under the age of 12 are trained in the ways of the force and get a chance to sharpen their lightsaber skills. While there are numerous sessions held throughout the day, signing up upon entering the park (in front of Epic Theater) is a must if your child wants to teach the evil Darth Vader a lesson. 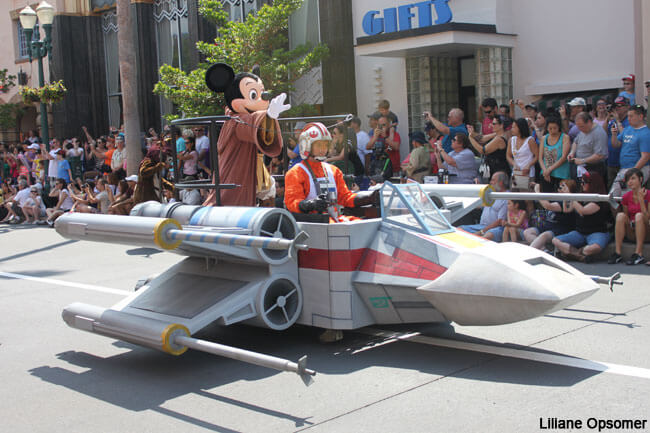 The 11 a.m. “Legends of the Force” Motorcade and Celebrity Welcome draws huge crowds to Hollywood Boulevard, and it is wise to claim a good viewing spot as early as one hour prior to the start of the parade.  The entire galactic council is present and all your favorite Star Wars characters.  The most impressive group is without doubt the Florida Garrison of the 501st Legion. Troopers from all over the state and visiting members from other chapters volunteer each year, marching from the main entrance toward the event stage much to the delight of their loyal fans. Another group that I really liked was what must have been at least 50 Padawans accompanied by a Jedi Master and led by R2D2. Proudly lifting their blue Lightsabers, the Jedi Apprentices were followed by their equally proud parents. According to a cast member, they were picked from the crowd earlier in the day as part of Disney's Limited Time Magic promotion. 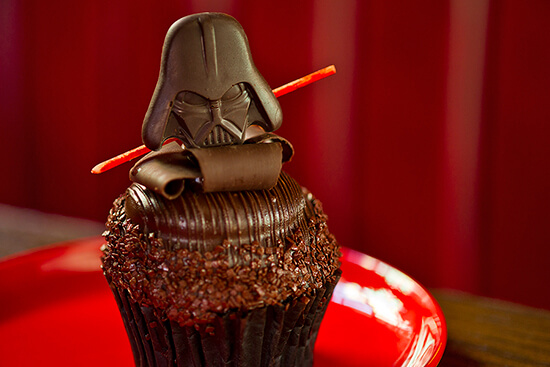 And than there is Darth's Mall, tucked in the courtyard behind the Rock 'n' Roller Coaster Starring Aerosmith, offering “Star Wars”-themed merchandise, specialty drinks, Darth Vader cupcakes and the D-Tech Me experience. For $95.95 plus tax, fans can have their image cast in Carbonite or have their likeness on a three-dimensional figurine. I could not resist the Lightsaber umbrella, which did set me back $44.95 plus tax. The mall is also the home of Roxy, the 17-foot-long rancor pet of Jabba the Hut, lovingly made by a fan. Last but not least, in a separate line one can meet Luke Skywalker, Princess Leia and R2D2 joined by C-3PO.  The line was very long every time I checked and the characters change about every half hour. Much to my chagrin I never managed to get my picture taken with the adorable droids. 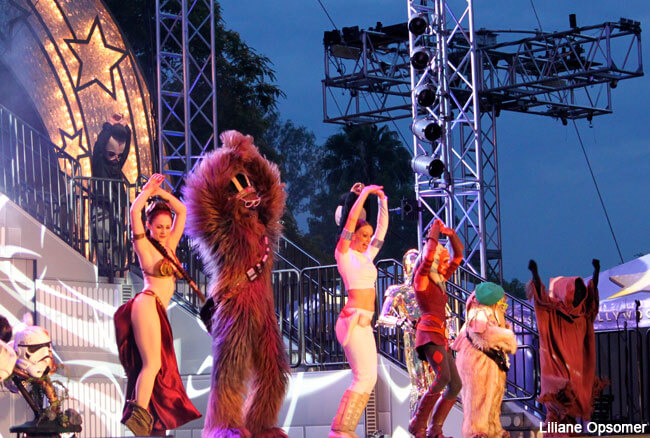 The Star Wars day ends with a danceoff between the Empire and the Rebel Alliance, Hyperspace Hoopla!, taking place under the Sorcerers Hat. It is a must-see show and worthwhile claiming your front stage spot as early as an hour prior to the show.