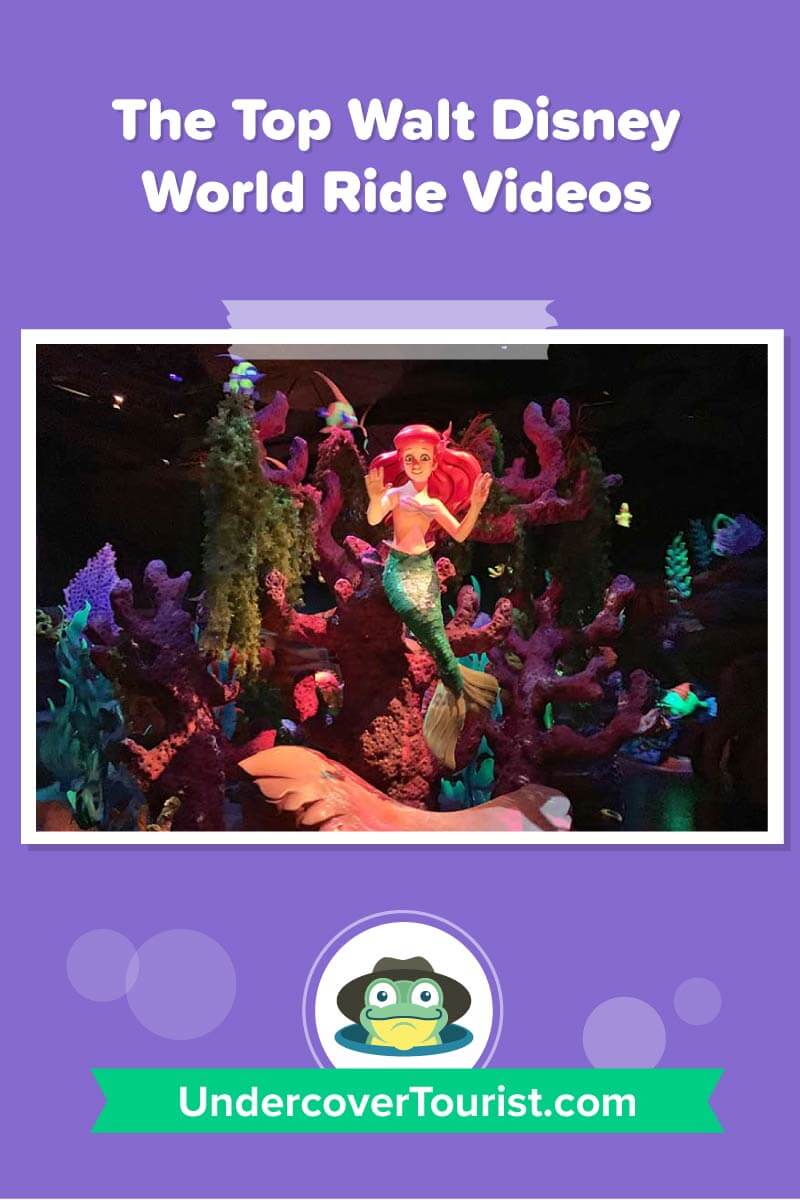 'Sup! Tad here. When you can’t go to Disney World, bring Disney World to you. Maybe your vacation was postponed or canceled, or perhaps you’re just missing Disney a little extra today. But frogtunately, we live in a technologically advanced world. As the Frog Family’s resident videographer, I’ve captured tons of footage at the Disney theme parks. When I say tons, I mean I’ve filmed most of the rides, shows, snacks, events and more, and then I upload the videos onto YouTube.

Not only do I want to preserve these toadally awesome memories for myself and my family, but also to share for anyone who can’t make it to the parks. To keep the magic alive between visits (and currently, during Disney World's temporary closure due to the coronavirus outbreak), I’ve rounded up some of my all-time favorite Disney World ride videos. Let’s take a virtual ride together!

While I realize watching a video of a ride isn’t the same as experiencing it in person, there are still quite a few positives to noodle. First of all, you don’t have to worry about long lines. Just click the play button, and you’re ready to roll! We love to stream Disney World ride videos on our big TV in the living room. We set up chairs in rows and try to mimic the movement, which only adds to the “Disney at home” experience, as we call it.

Watching ride videos is also very inclusive! You don’t have to worry about height restrictions or intense movements, so anyone in the family can join in on the fun. It’s also a great way to get tadpoles prepared for some of the bigger or more intense rides so they know what to expect. Again, it won’t be the exact same experience, but at least you’ll eliminate any surprises or know to avoid the Twilight Zone Tower of Terror if they’re afraid of the dark and drops.

Now, it’s time to share my best work! If you want to see even more theme park videos, be sure to subscribe to our YouTube channel and virtually explore Disney, Universal, SeaWorld and more. Rad!

Heigh ho, it’s off to the mines we go! This family-friendly coaster is one of the most popular rides at Magic Kingdom. With this video tour, you can skip the lines and hop right into the swinging mine train. It takes you deep into the mines, where the dwarfs are digging and the gemstones are glittering.

Choo-choo, all aboard! Escape the comfort of your home to take on the wildest ride in the wilderness.

Pirates of the Caribbean

Yo ho, yo ho, a pirate’s life for me! Set sail through Dead Man’s Cove, navigate cannon fire and watch rowdy pirates ransack a village. Be sure to keep an eye out for the swashbuckling scoundrel, Captain Jack Sparrow!

Under the Sea ~ Journey of the Little Mermaid

Sing along to the popular tunes from “The Little Mermaid,” as you go on an underwater adventure that recreates the classic Disney “tail.” You don’t have to worry about bothering other families with your (frogtastic) singing talent at home.

Zip-a-dee-doo-dah … down the famous Critter Country mountain into a briar patch. Watching the ride virtually is a win-win if you don’t actually want to get wet. But if you miss the ability to get soaked, use a spray bottle or go outside to use a hose for a successful splash. This Disney World ride video is extra special because it takes place at night!

Before you watch this one, come up with your own sleek design that will boost your car’s Capability, Efficiency, Responsiveness and Power. Draw it out (that’s our preferred method!) or simply share how you would design your car. Once you’re set, play the video and complete the series of tests. Then, discuss if you think your car would have passed the tests. Vroom!

The Seas with Nemo and Friends

I just recently reshot this toadally rockin' ride with my new video equipment! Dive deep into the ocean where Nemo has gotten lost again. My favorite part is when the animated characters look like they're swimming in the actual aquarium with real creatures at the end of the ride.

Journey into Imagination with Figment

Join Dr. Nigel Channing, chairman of the Imagination Institute, and Figment, on a tour of the institute’s labs exploring the five senses. Use one little spark of inspiration to pretend that you’re actually on the ride.

Soarin’ Around the World

I’d say this is one of the best ways to travel around the world without having to leave your house! Soar over snowy mountaintops in the Swiss Alps, pass by iconic landmarks and glide over beaches and majestic waterfalls.

Anna, Elsa and their friends welcome you to their kingdom of Arendelle. Tour Elsa's ice castle, and wave hello to the trolls, Marshmallow and the Snowgies along the way!

It’s time to face the legendary Yeti after you ascend the towering Himalayan mountain and quickly find out that the track is broken. As one of the more thrilling rides, this video may be especially hopful if you have younger tadpoles, as you can test their reactions to the backwards movement and in-the-dark moments before actually climbing that mountain.

Relax during this virtual boat ride through the jungles of Pandora. Save this one for a more hectic or restless day. The calming chants and colorful creatures never fail to give me positive vibes.

Raft down the rapids of a raging river. To re-create this one, you’ll need more than just a spray bottle … you might as well go outside and dump an entire bucket of water over your head!

Take a safari ride into the savanna and try to spot as many animals as possible. This particular safari hoppens during sunset, which is personally my favorite time because the lions are more active at night!

Travel back in time to bring an Iguanodon back to the present day before an asteroid hits earth. The life-like dinosaurs terrified me when I was younger. This video puts them at a much safer distance. Gulp.

Shrink to the size of a toy and ride on the back of Slinky Dog as his coils spring into action. Bunny hop, twist and turn on this family-friendly roller coaster that Andy built from a Dash & Dodge Mega Coaster Play Kit in his backyard.

The Twilight Zone Tower of Terror

OK, so it might be hard to imagine the sudden drops in the dark, but I couldn’t pass up a trip to the Fifth Dimension. The eerie hotel lobby and foreboding bellhops only add to the experience that makes you feel like you’re in the middle of a “The Twilight Zone” episode.

If you’ve ever wanted to take a ride inside the Millennium Falcon, now’s your chance. Help Hondo Ohnaka on a covert mission to bring back loot to Batuu. I do miss the interactivity of being able to control the fastest ship in the galaxy, but I notice new details that I missed while steering it when I watch at home.

Star Wars: Rise of the Resistance

I’m ending my list with two brand-new Disney World ride videos — not only for a grand finale, but also for the opportunity to stop here if you don’t want to be spoiled! First up is Star Wars: Rise of the Resistance, which opened in December 2019 with a virtual boarding queue. It’s up to you if you wish to watch it or wait it out until you’re at the park. I’ll just say that it’s a toadally rad experience, even if you’re not a “Star Wars” fan! The ride technology is out of this galaxy (pun intended), and it quickly became one of my favorite theme park rides.

It’s hard to believe that this is the first Disney ride to feature our favorite mouse, but it’s finally here! Mickey & Minnie’s Runaway Railway opened early March, just a week before the temporary park closures. Enter the cartoon world as you’re whisked away on a zany adventure aboard a runaway train. How will Mickey & Minnie save the day?

We hope you enjoyed our virtual tour of Disney World ride videos! The best part is that you can revisit them at any time to keep the magic alive. Let us know which attraction you enjoy riding virtually in the comments below!

Related: What Makes Walt Disney World Resort Magical to Me