What's Inside the Wizarding World of Harry Potter™ - Diagon Alley™

Taking a trip to Universal Orlando Resort soon? Well, here's a rundown of everything you will find inside Diagon Alley™ -- all of the rides, shops, eats, drinks and interactive experiences. Yes, there is quite a lot to take in, and the painstaking details are what makes the Wizarding World of Harry Potter™ such an amazing, immersive experience. Whether you are a die-hard Harry Potter fan or not, this is an incredible experience!

Harry Potter and the Escape from Gringotts™ 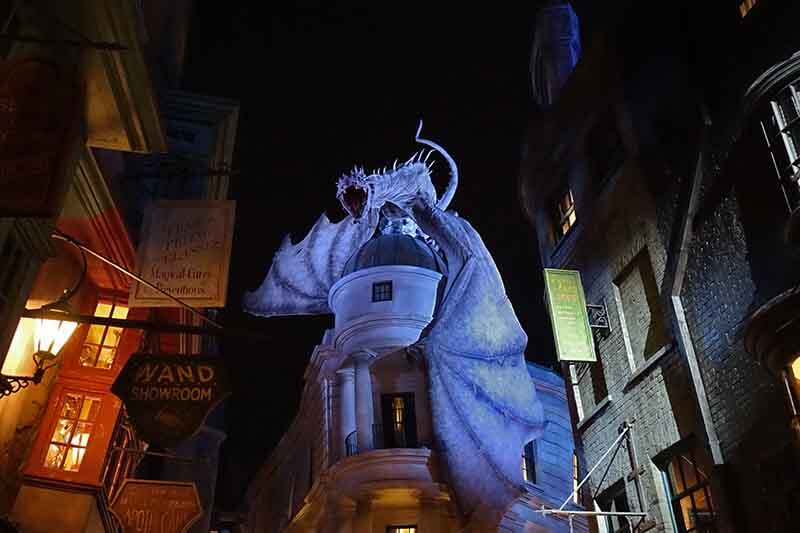 At the far end of Diagon Alley™, guests will encounter Gringotts Bank and the 60-foot-tall, fire-breathing Ukranian Ironbelly dragon sitting atop of it. The dragon serves as a deterrent to would-be thieves and sets the scene for this ominous experience. Guests will travel through the bank's grand marble lobby, with its enormous crystal chandeliers and past the goblins who run the bank. A bumpy "elevator" takes guests some nine miles down below. From there it's a short walk up winding stairs to the loading platform and a ride car that will take them deeper and deeper underground through the bank's vaults. Guests will experience the moment when Harry, Ron and Hermione break into the bank to retrieve a magical object to help defeat Lord Voldemort. Along the way, they will come face to face with Death Eater, Bellatrix Lestrange, and He-Who-Must-Not-Be-Named in this multi-sensory, 3D experience. While Hogwarts™ Express is filled with whimsy and delights (minus a dementor or two), Escape from Gringotts is layer upon layer of suspense and, yes, sometimes fear, as you explore the depths of this most guarded bank. 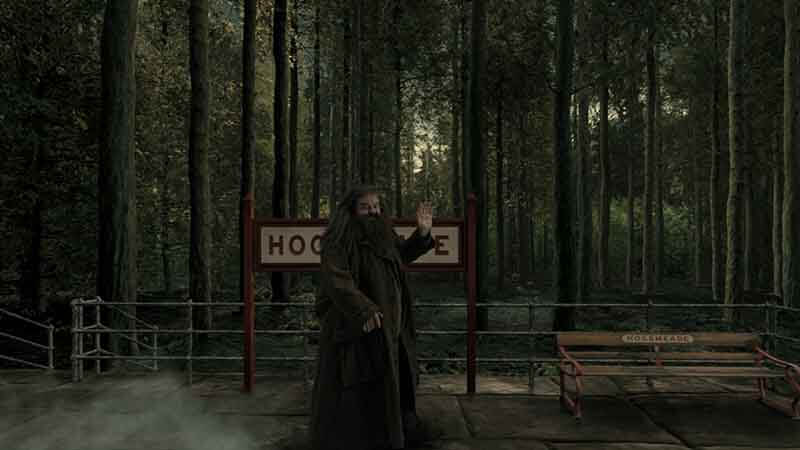 Muggles will get their first chance to board the train that takes Harry, Ron, Hermione and their classmates from London to Hogsmeade and vice versa. From the King's Cross Station in London, guests will pass through a brick wall to reach Platform 9¾ and from there they will climb aboard the iconic steam engine. After departing, the idyllic British countryside comes into view -- along with a few of your favorite Harry Potter characters, including Hagrid, Buckbeak the Hippogriff, the Knight Bus and the Weasley twins. The experience is different for each leg of the journey, and park-to-park admission is required to ride the train from either destination. Don't be surprised if you're as filled with nerves and anticipation as Harry was on his first trip! 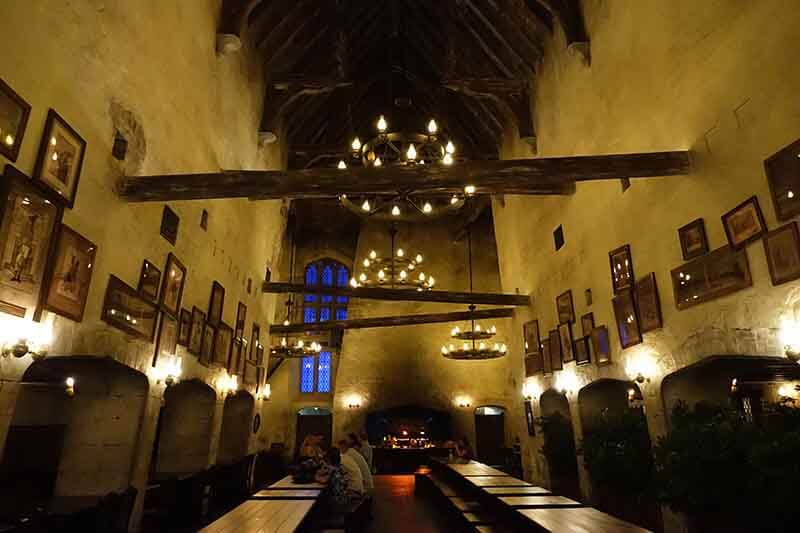 Guests will find traditional British dishes inside this popular wizarding pub and inn. Among the dishes will be Bangers and Mash (traditional roaster sausages with creamy mashed potatoes), Fish and Chips, Lamb and Guiness Strew, Toad in the Hole (traditional sausage baked into a Yorkshire pudding and served with onion gravy), Fisherman's Pie (salmon, shrimp and cod baked together under a potato crust) and the Ploughman's (English cheese, crusty bread, cornichon pickles, apple beet salad and a Scotch egg). For breakfast, guests will find apple oatmeal flan and an egg, leek and mushroom pasty. The Leaky Cauldron™ will also serve up some draught beers created specifically for Diagon Alley -- Wizard's Brew and Dragon's Scale, popular favorites Butterbeer and Pumpkin Juice, and new creations Fishy Green Ale and Tongue Tying Lemon Squash. 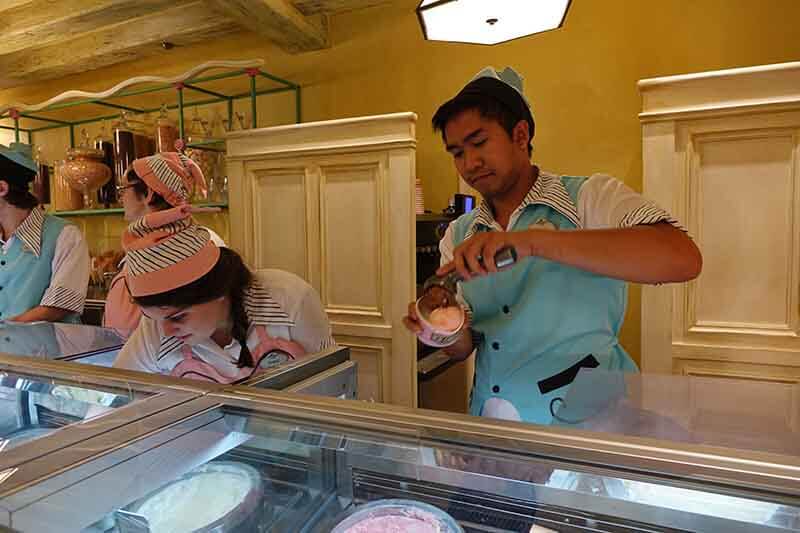 This parlour, a favorite of Harry, Ron and Hermione, serves up scoop and soft-serve ice cream in an assortment of amazing flavors such as Earl Grey and Lavender, Salted Caramel Blondie, Chocolate Chili, Clotted Cream, Apple Crumble, Strawberry and Peanut-Butter, Sticky Toffee Pudding, Orange Marmalade and Butterbeer. The Butterbeer is a soft-serve concoction that is absolutely divine! Additionally guests will find Continental breakfast items, pastries, scones and sweet cakes as well as Pumpkin Juice, teas and water.

Some of the new crafty creations for Diagon Alley™ include Fishy Green Ale, Otter's Fizzy Orange Juice and Tongue Tying Lemon Squash. While the Fishy Green Ale, a mix of cinnamon, mint and blueberry won't be everyone's cup of tea, it is quite unexpected! Additionally in Horizont Alley, guests can imbibe in the creations from Eternelle's Elixir of Refreshment. The elixirs include Draught of Peace, Babbling Beverage, Elixir to Induce Euphoria and Fire Protection Potion. When added to Gillywater, the elixirs are transformed into a surprise of flavors.

Ollivanders™: Makers of Fine Wands since 382 BC 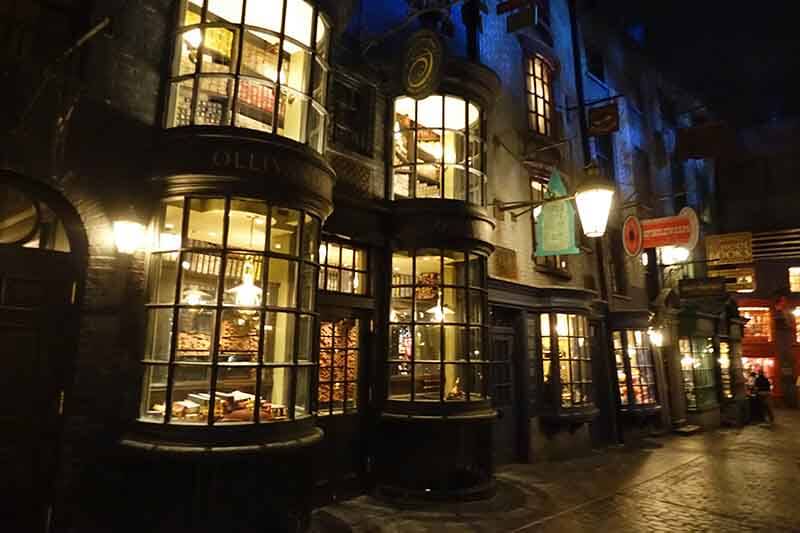 A must-do for every young wizard, Ollivanders is the place to choose a wand - or have a wand choose you! This shop is stacked to the ceiling with walls of towering wand boxes, just waiting to find a wizard! 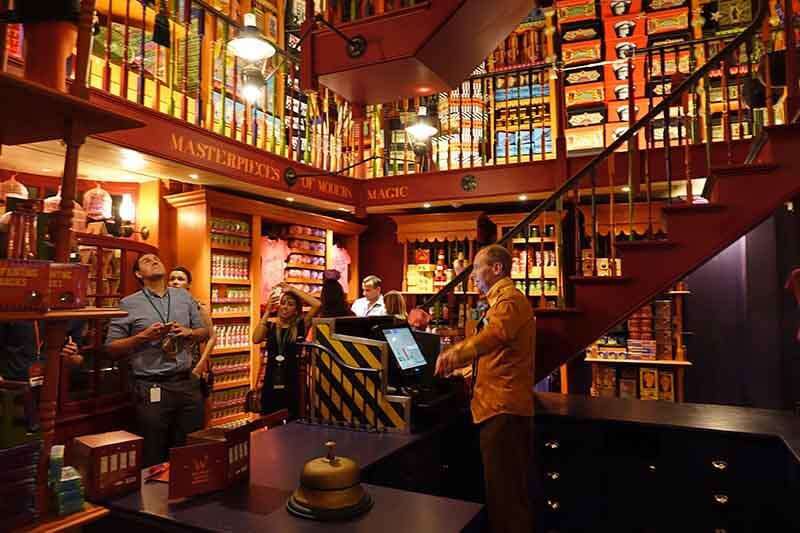 Those looking to take a walk on the dark side need look no further than this Knockturn Alley shop filled with Dark Arts objects such as Death Eater masks, skulls and costumes.

Every wizard needs a pet, and this the place to find plush owls, rats or cats of every color. Guests will find Harry Potter originals such as Crookshanks™, Fang, Buckbeak™, Fluffy and Scabbers™.

Madam Malkin’s Robes for all Occasions

Outfit yourself in Hogwarts school uniforms, ties, sweaters, cardigans and other apparel. You'll also find fine costumes such as Hermione's ballgown, complete with jewelry and evening bag available for purchase.

After you escape from Gringotts, you'll want to arm yourself with wizarding wares, such as crystal balls, telescopes and armillary spheres.

You'll find all the writing supplies a young wizard could want, including quills and ink, tablets and stationery, inside this small shop next door to Wiseacre's Wizarding Equipment.

Outfit yourself with all of the gear you will need for your next Quidditch match, including Quaffle balls and brooms, Golden Snitches and Bludgers. Fans can also show their team spirit with T-shirts, hats and pennants from their favorite Quidditch team.

The Tales of Beedle the Bard

A troupe from the Wizarding Academy of Dramatic Arts perform a show retelling two of the tales of Beedle the Bard, "The Fountain of Fair Fortune" and "The Tale of the three Brothers."

Celestina Warbeck and the Banshees

Singing sensation and sorceress Celestina Warbeck, Molly Weasley's favorite, performs some of her never-before-heard songs, including "A Cauldron Full of Hot, Strong Love," "You Stole My Cauldron But You Can't Have My Heart" and "You Charmed the Heart Right Out of Me." 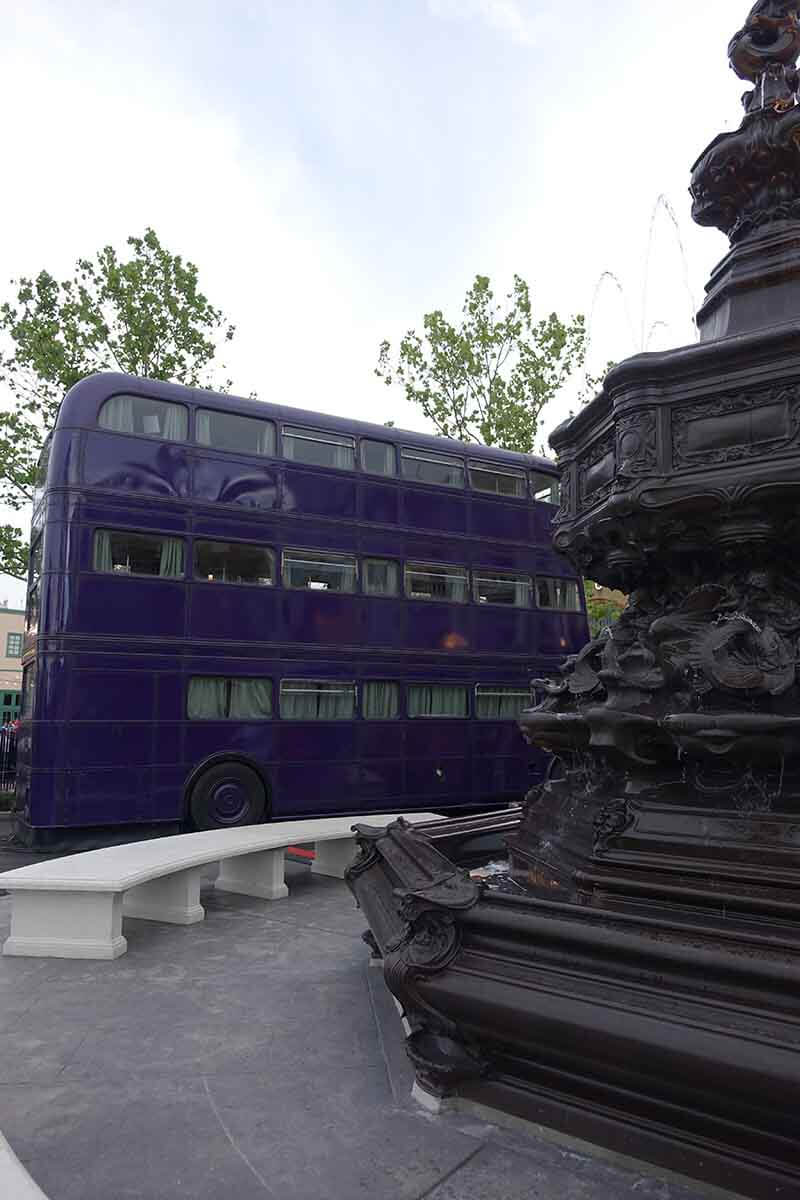 Meet and interact with the Knight Bus Conductor and his sidekick, the shrunken head hanging from the rear-view mirror, of the bus that provides emergency transport for stranded witches and wizards.

Muggles will have a chance to interact with a Gringotts bank goblin as they exchange their Muggle money for Wizarding Bank Notes, which can be used throughout the park to purchase snacks and merchandise.

At this studio, you can take your very own moving portrait and purchase it as a souvenir!

There you have it -- all of the experiences inside the Wizarding World of Harry Potter™ - Diagon Alley™! What's your favorite thing to do at Diagon Alley? Let us know in the comments below!