How to Get Your Baby Yoda Fix at Disney's Hollywood Studios

The cuteness is strong with this one! The internet exploded when ShopDisney finally revealed its first-ever Baby Yoda plush in late December. And it exploded again when the fuzzy little 11-inch cutie immediately sold out. Disney has taken what seems like an unprecedented long time to offer this official soft and squeezable toy after our galaxy first met "The Child" back in November. If you were lucky enough to snag a pre-order, the $24.99 plushies are expected to arrive by April 20. Recently, Disney’s new Hasbro animatronic Baby Yoda also arrived online — and immediately sold out — as well. If you missed out, despair you will not! You might have felt a disturbance in the Force when ShopDisney announced a restock of Baby Yoda plush for pre-orders arriving in June. (As of this publication, they’re still available!) 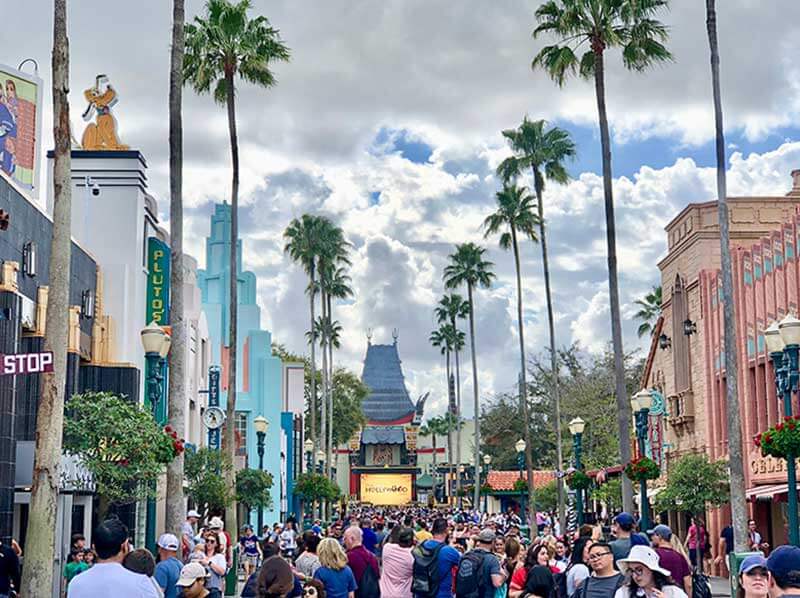 So far, this little guy has only been available online. And while we don’t know when the plush will appear in the parks, we do know how to get your Baby Yoda fix in other ways at Disney’s Hollywood Studios in the meantime!

An Initial Void in the Galaxy 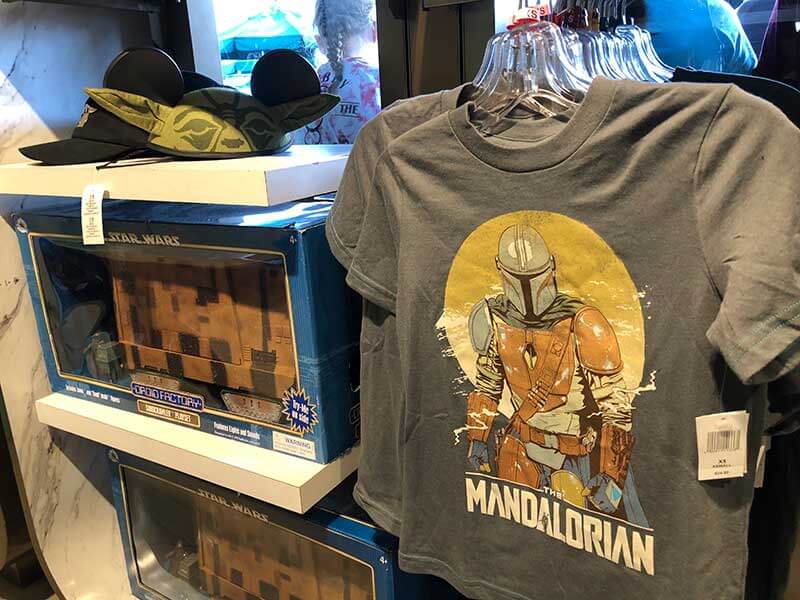 Since the very first episode of "The Mandalorian" aired on Disney+ last year, "Star Wars" fans have been hungry for Baby Yoda theories, memes, coffee gifs and swag. Even non-"Star Wars" fans instantly loved The Child’s adorably oversized eyes, floppy ears and mint green skin swaddled in a soft, fuzzy … coat? Blanket? Jedi robe? (Even the Frog Fam is toadally enamored by the little green guy ... and that's saying a lot, considering his snack of choice! Gulp.) So much is unknown about Baby Yoda: his species, his origin, his backstory, his future. But the biggest mystery has been … where the heck is the merch??!!

For a company that’s known for making merchandise for literally anything and everything (example: the Skyliner collection), Disney was seemingly not ready (or willing) to blue milk the overnight adoration of Baby Yoda. In the weeks following his TV debut, there were zero official Baby Yoda items in Disney Parks or on ShopDisney. Baffled guests (our own child, Tad, included) searched high and low for even hints of him at Star Wars: Galaxy’s Edge. And when he finally arrived at Disney’s Hollywood Studios and Disneyland Resort just a few weeks ago, the excitement was short-lived, with the in-demand merchandise selling out as soon as it appeared.

Where to Find "The Child" Today at Disney's Hollywood Studios

Nowadays, the Baby Yoda — and restocking — Force is pretty strong at Disney's Hollywood Studios (minus the online-only plush.) But he’s not in a galaxy far, far away; you’ll be seeing green right off Hollywood Boulevard at Keystone Clothiers.

And we’ll save you a trip to Batuu: Keystone Clothiers is the only place you’ll find Baby Yoda at this time. A Disney Cast Member stationed at the entrance to Star Wars: Galaxy’s Edge confirmed that, “Master Yoda has been absorbed into the Force. And he — and his kind — have never visited the planet of Batuu as far as we know.”

Here’s what we found in a mint green corner of Keystone Clothiers: 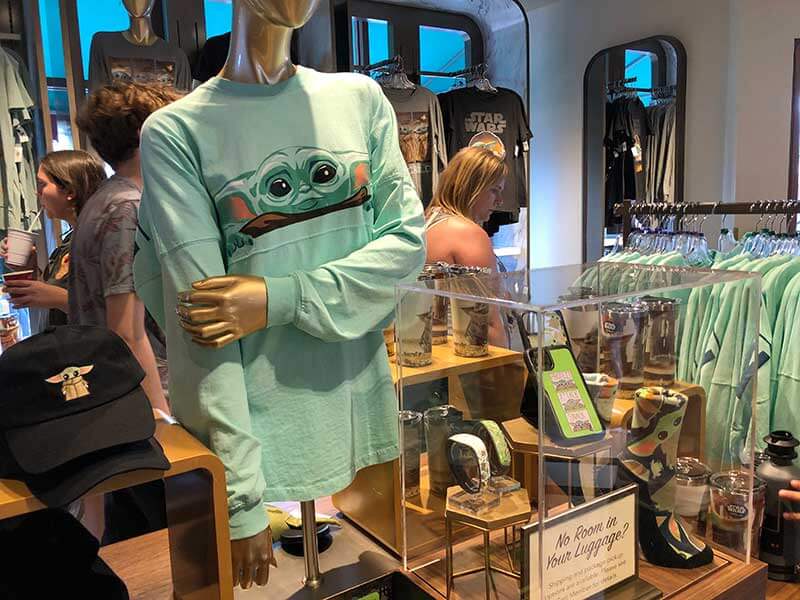 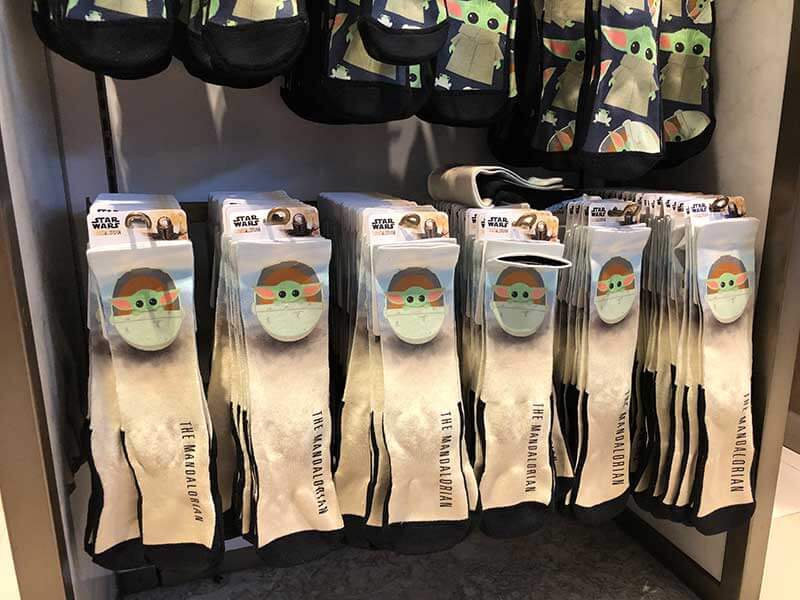 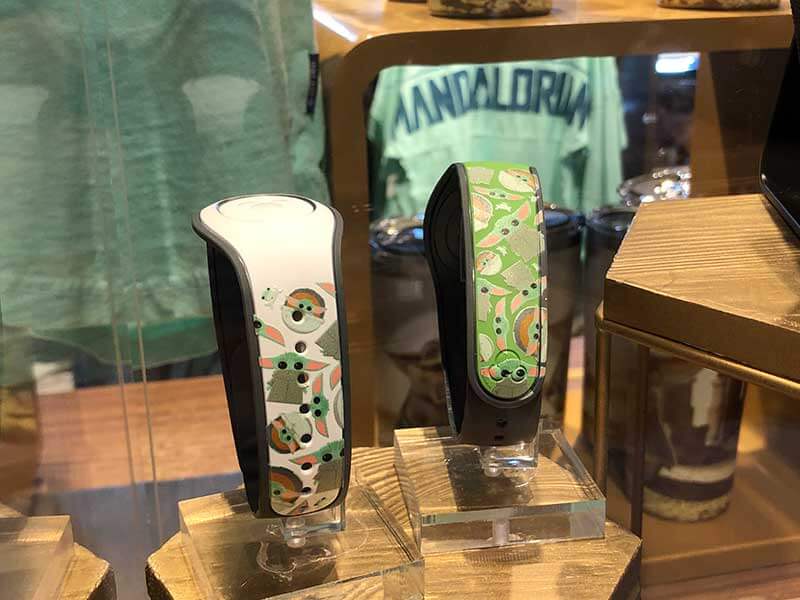 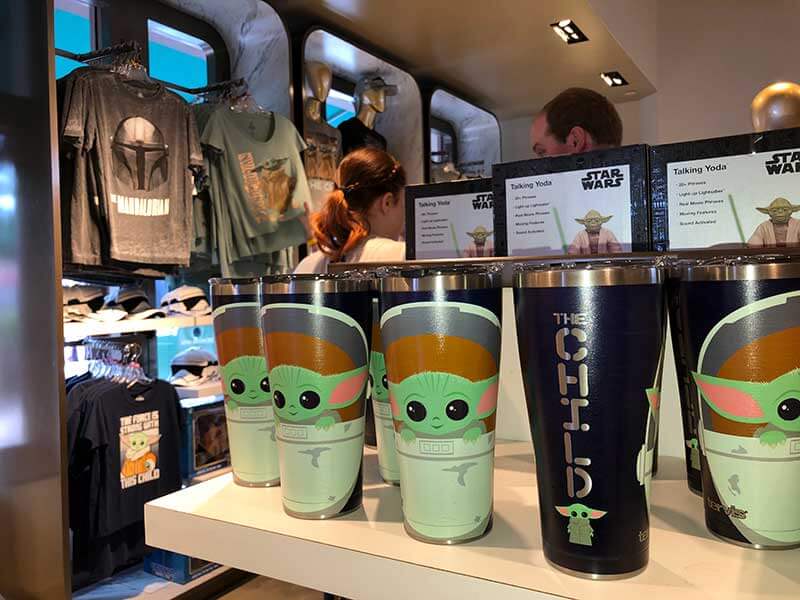 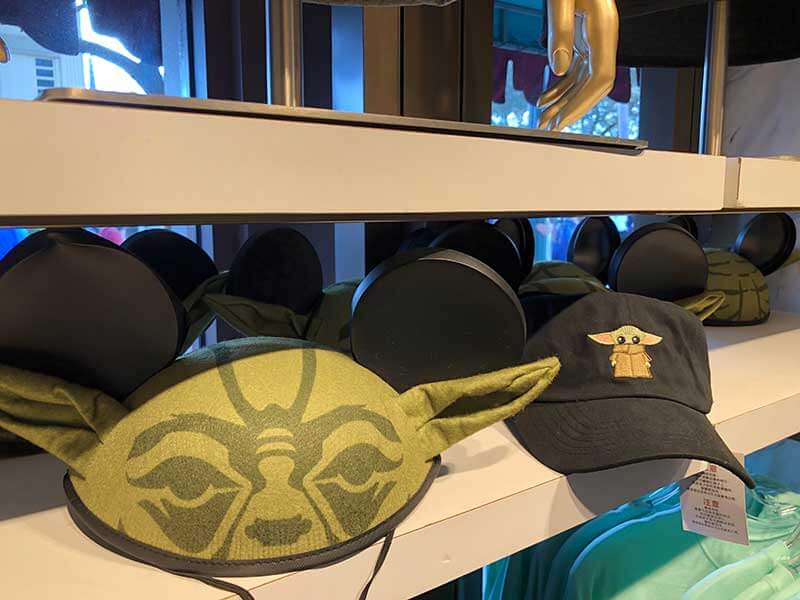 What you won’t find? A plush. There are Yoda Dolls, but they’re simply the old-school “Yoda.” Not The Child.

Where to Find Master Yoda Merch at Disney's Hollywood Studios

If you prefer the original wise one, Master Yoda can be found in a few places throughout Hollywood Studios: 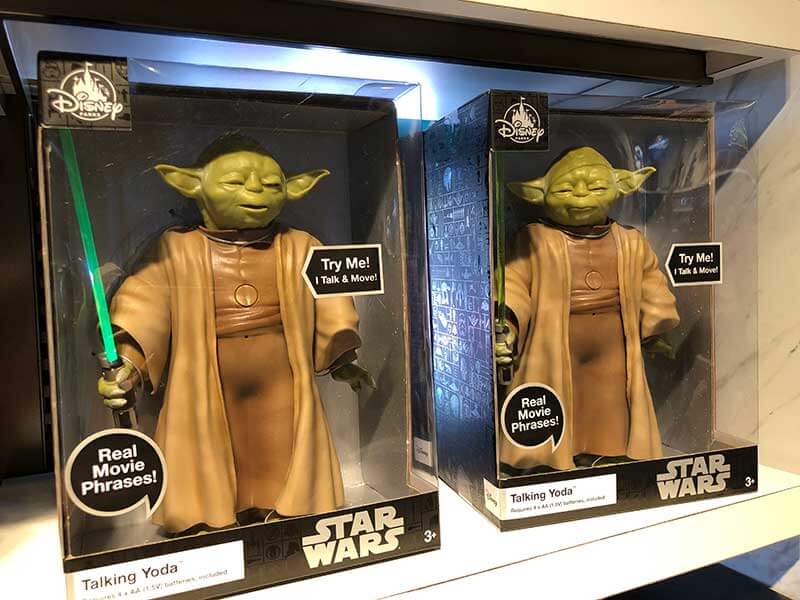 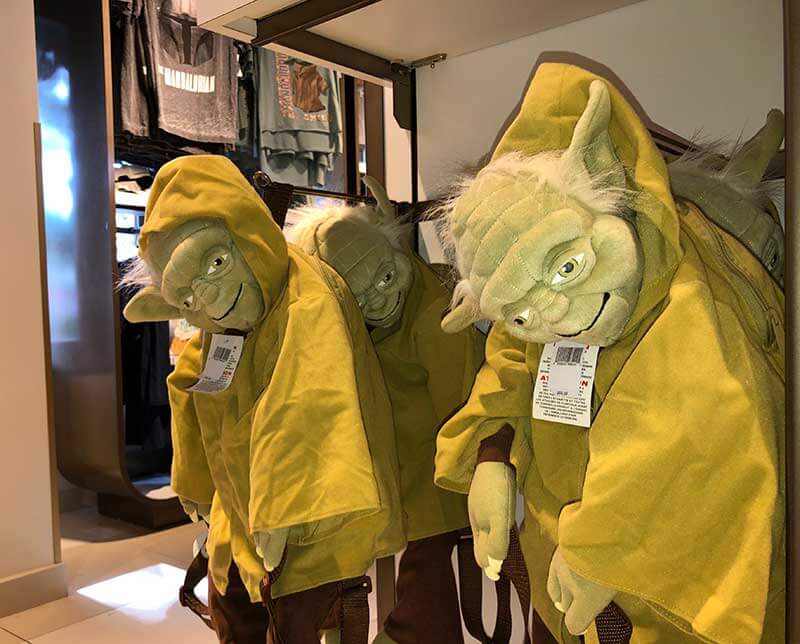 Throughout the Park’s Cart Stands 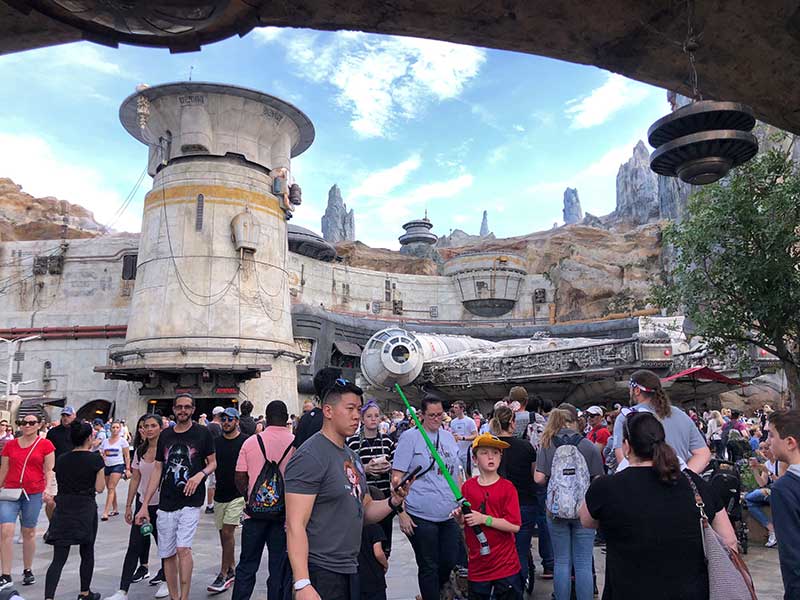 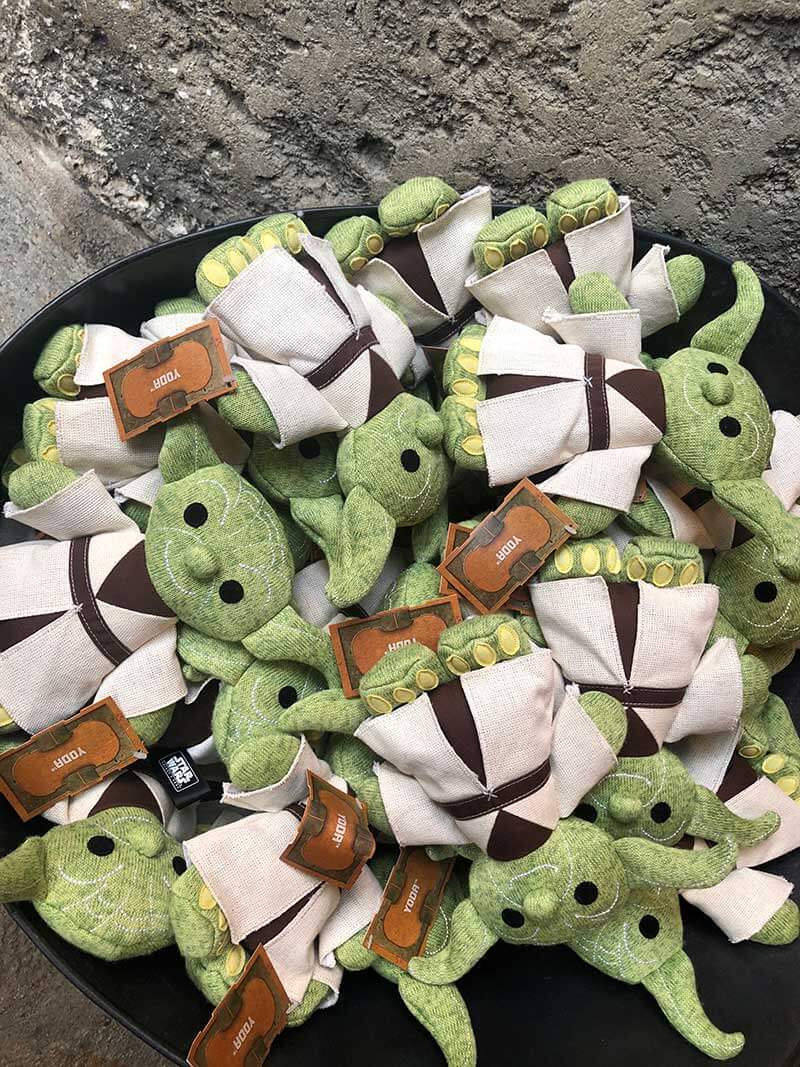 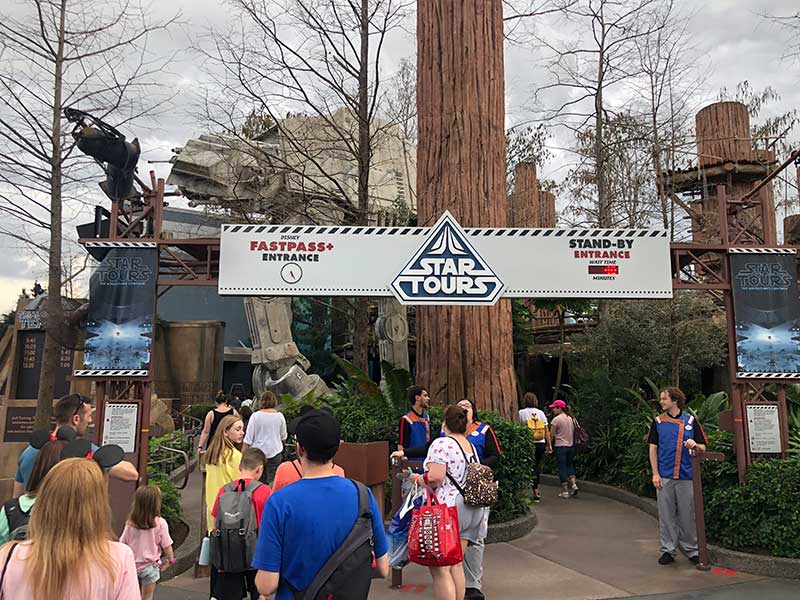 You may catch a glimpse of our fellow green friend in two of the roughly 200 scenarios that play out on Star Tours — The Adventures Continue.

You won’t see him, but you’ll hear his voice guiding young padawans several times a day.

But once again, you won’t find him in Galaxy's Edge as he’s “never visited” the planet of Batuu or Black Spire Outpost. We even checked the Toydarian Toymaker store based on some online rumors and he was not, in fact, swaddled up in the corner nest of the store. (We believe this was likely a short-lived stunt by one rogue cast member. Not to be confused with the Rogue One.) 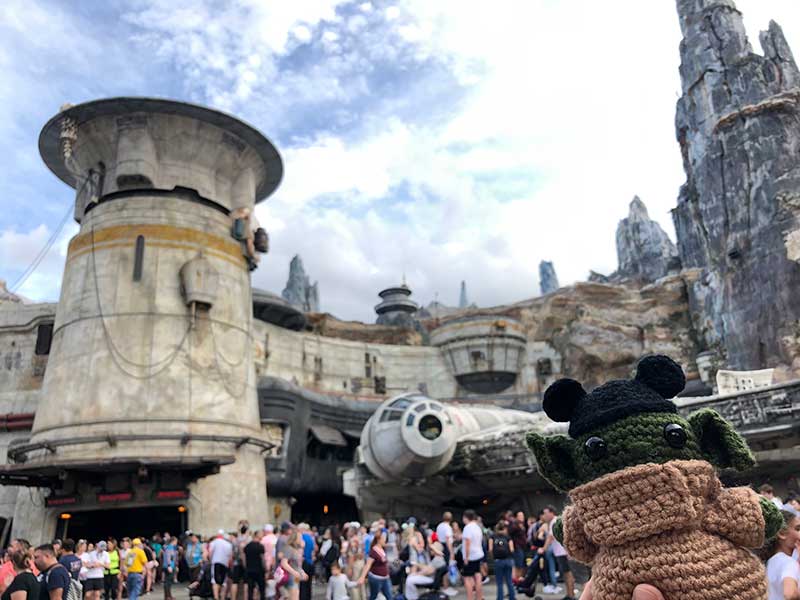 You will find that tons of dedicated fans have made their own unofficial shirts, hats and even yarn Baby Yodas, so keep your eyes open as you explore Batuu.

Last But Not Least … Order a Baby Yoda Frappuccino! 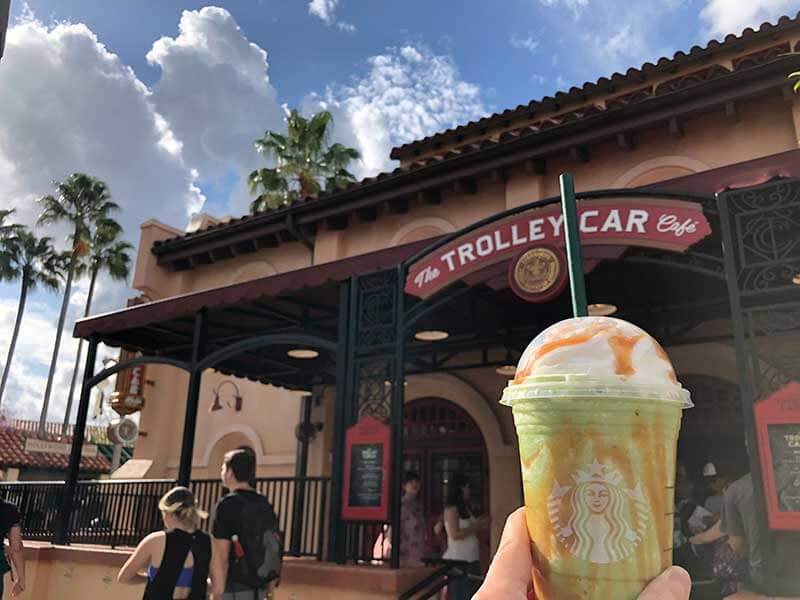 Hop over to the park’s only Starbucks location, Trolley Car Café, right off of Hollywood Boulevard. (This is literally right across the street from the Baby Yoda merch at Keystone Clothiers.)

Don’t worry about having to memorize and explain the “secret menu” ingredients. The barista cast members knew exactly what this Momma Frog was seeking when I hesitantly asked to order the “Baby Yoda Frappuccino.” It’s a super-sweet (and super colorful!) concoction of green matcha poured into a caramel-lined cup with whipped cream, more swirly caramel topping, and crunchy caramel toppings ... a toadally adorable (and frog-free) snacky-snack!

May the green be with you!

That’s our full list of Yoda sightings around Disney's Hollywood Studios! We loved looking for our fellow green friend at the park. Have you seen him — Baby or otherwise — in other places? How do you get your Yoda fix? Are you planning to watch season two of "The Mandalorian" later this year? Comment below, you will!