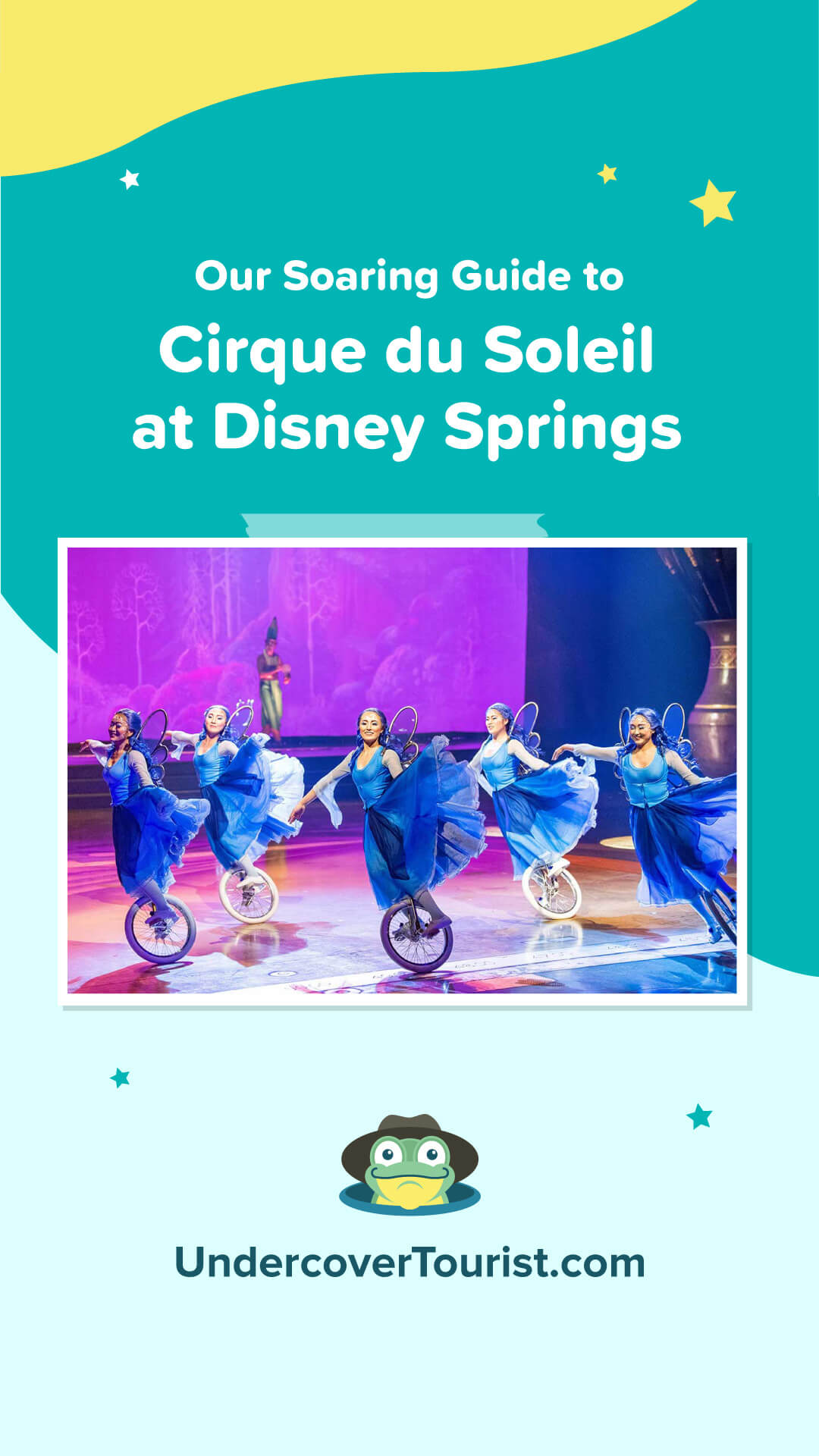 Lily's reaction to her first Cirque du Soleil show is the same as most of the audience as we witness incredible artists defy gravity before our very eyes. The acrobats are mesmerizing as you wonder, "How do they do that?" The talent and dazzle of a Cirque show are truly out-of-this-world and a delight for all ages.

The newest show at Disney Springs combines the awe of Cirque du Soleil with the wonder and magic of Disney Animation. "Drawn to Life" brings an animator's desk alive with incredible costumes, choreography and acrobatics — all pulled together with beloved Disney music and animation. The whimsical 90-minute show has a talent-packed cast that delivers jaw-dropping performances. Plus catch lots of your Disney animated favorites literally drawn to life!

The new show was originally supposed to open just weeks before Disney World closed in March 2020. After a year and a half, the entire creative team is hoppy to say, "Intermission is over." Read on for our guide to seeing this new Cirque du Soleil show at Disney Springs!

The circus is in town! Cirque du Soleil at Disney Springs is a permanent theater building for contemporary circus performances. The large building mimics the white tent of a circus and reaches incredible heights. The building was custom-created in the late '90s to host "La Nouba," which ran until 2017. 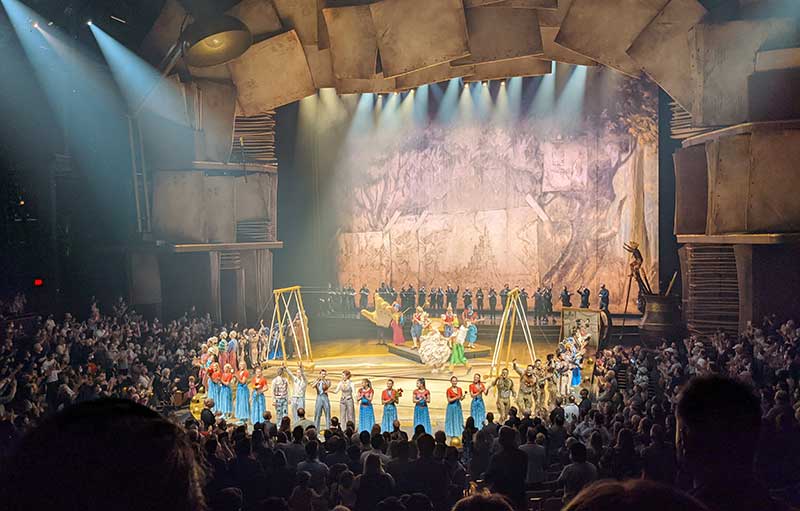 With more than 1,000 seats surrounding the stage in a semi-circle, there is no bad seat in the theater! The seats go up stadium-style, so there's no worry about someone blocking your view. Keep in mind there is a lot of vertical acrobatics and some parts of the show happen in the middle walkway. Note that there is no intermission during this 90-minute show, and while you are free to exit at any time, this show might be a tad long for our youngest tadpoles.

Getting Tickets for Cirque du Soleil at Disney Springs

Tickets are now available for "Drawn to Life" by Cirque du Soleil at Disney Springs. Prices vary from $85 to $185 per person and dates go through Dec. 2022. 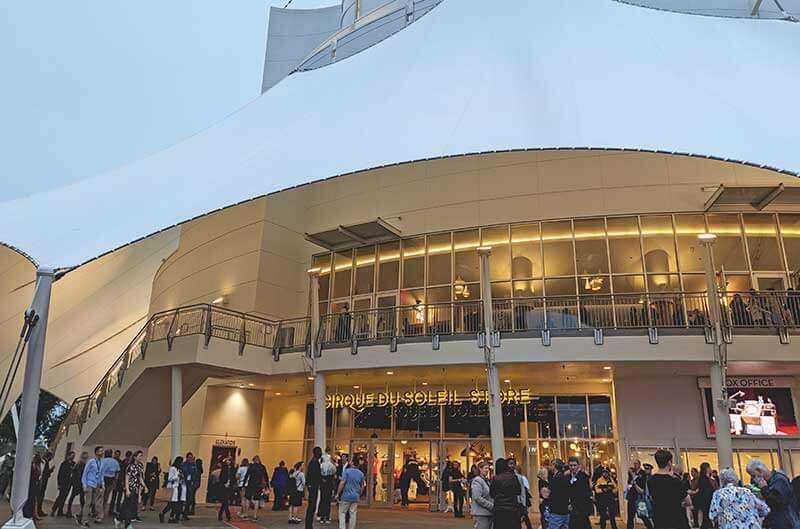 Cirque du Soleil is located on the West Side near House of Blues. You can't miss the large white "tent" building. If driving, park at Orange Garage or the surface lots for less walking time. If staying at a Disney Resort, you can use bus transportation to arrive at Disney Springs. Be sure to allow enough time for driving, security and walking across Disney Springs.

Doors open 30 minutes before showtime. A gift shop is available, as well as drinks for purchase. 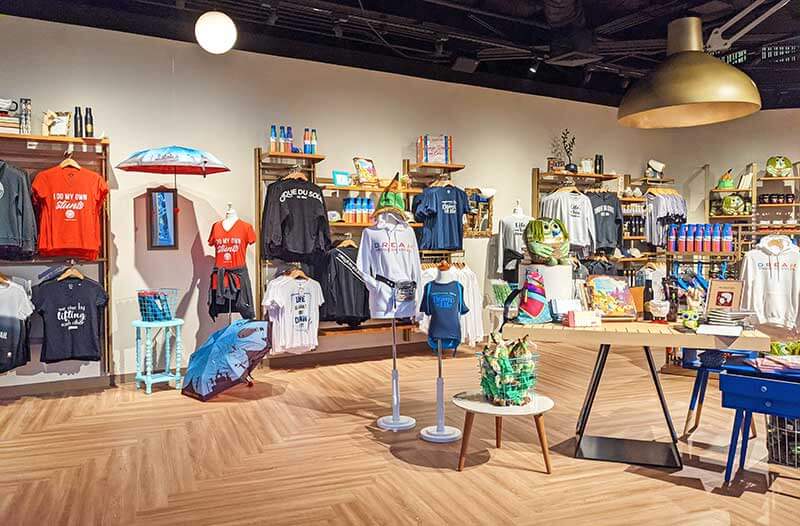 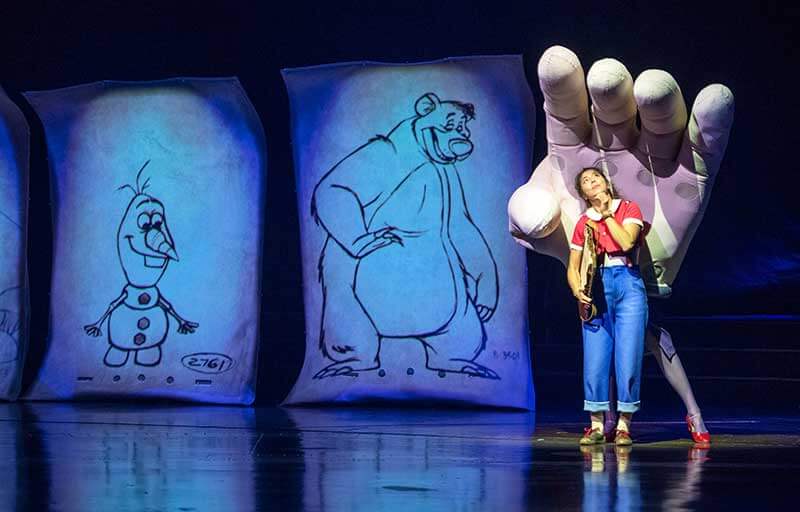 Drawing inspiration from 100 years of Disney Animation, we enjoyed seeing glimpses of so many of our favorite characters and hearing familiar Disney tunes. Combined with the incredible choreography that Cirque du Soleil is known for, the show is packed with action!

The show really blends together so many different art forms and reminds us how animation began with picking up a pencil. Before the official showtime, some kids were even chosen to draw pictures and their artwork was shown on the projector for all to see. 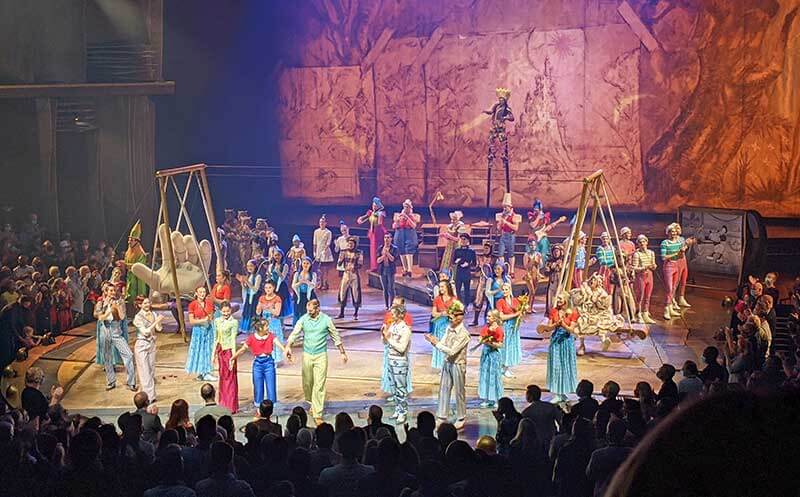 While none of the actors play a Disney character, they feel like they just stepped out from a fantastical world. The costumes are so vibrant and unique. Sometimes as they performed feats, so the animated characters would too. It felt like we were watching kids on a playground as they use their imagination to do anything. The show touches on hitting a creative block and struggling to get ideas but also overcoming those obstacles. 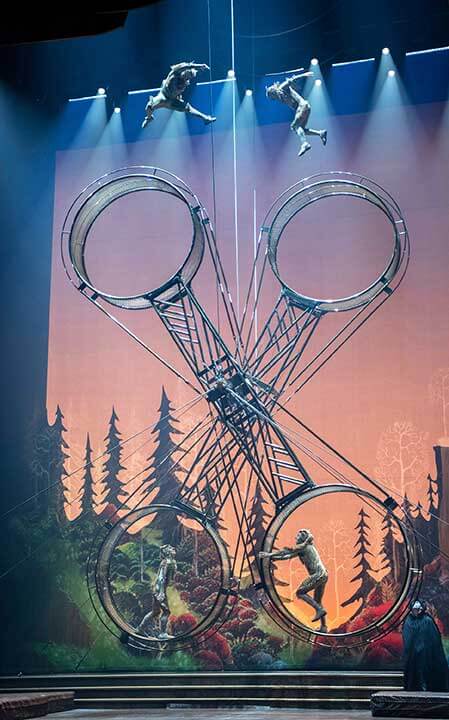 As each scene unfolds, you are provided with a variety of talents. The show consists of a huge cast, all with different acrobatic, gymnastic and dancing skills. The performances are truly out of the world. Some of the sequences had me baffled as to how they were still flying through the air over and over.

The projections were incredible and really helped to pull together all of the different mediums. It was wonderful seeing characters drawn on-screen. Sometimes you don't even know where to look — that's how big this show is!

It was wonderful to be back in a theater and feel the energy of the cast and audience. The variety of entertainment makes this a worthwhile experience. The show fittingly opened on Mickey Mouse's birthday, and the show truly is "a love letter to Disney animation."

Have you ever been to Cirque du Soleil at Disney Springs? What animated characters would you hope to see during the show? Share with us in the comments below!