The hustle and bustle of the holiday season has simmered away to the calm of a new year, but the excitement never slows as new experiences and changes are happening all around the Walt Disney World Resort! 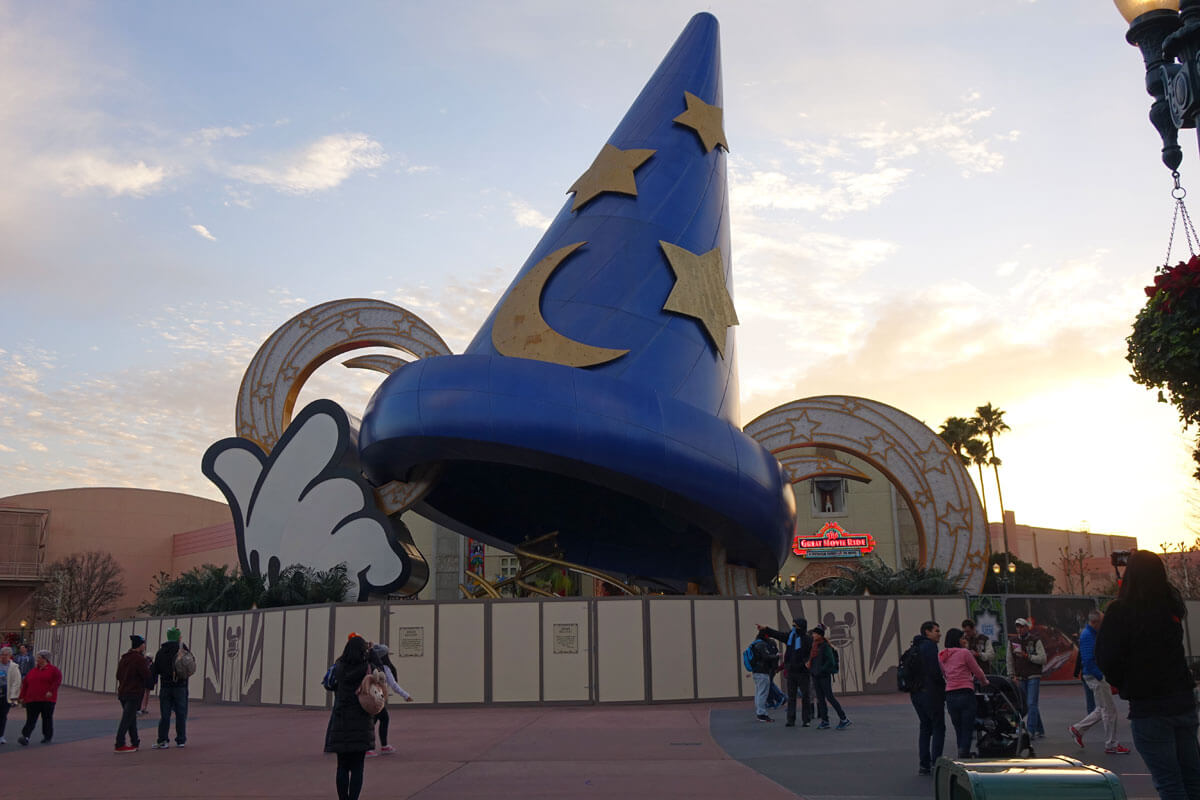 Just after the turn of the year, we began to say goodbye to an old icon at Disney’s Hollywood Studios. Removal of the big, blue Sorcerer’s Hat that has been the backdrop of thousands of guests’ photos since it was erected in 2001 has begun with construction walls going up on Jan. 6. The decorative stars on the ears and part of the spiral have already been dismantled. 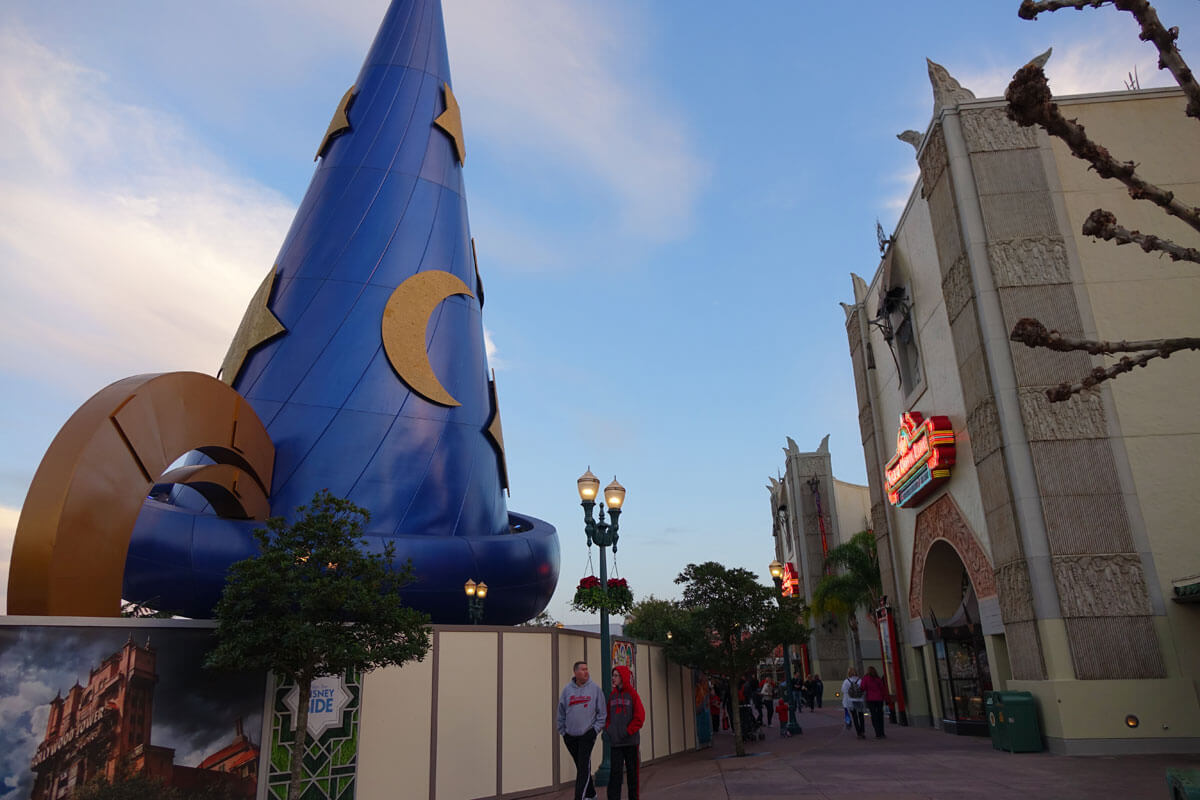 The removal of the Sorcerer’s Hat is expected to restore the original view from Hollywood Boulevard of the replica of the Chinese Theater, which houses The Great Movie Ride, recently sponsored by Turner Classic Movies. The project is expected to take several weeks. 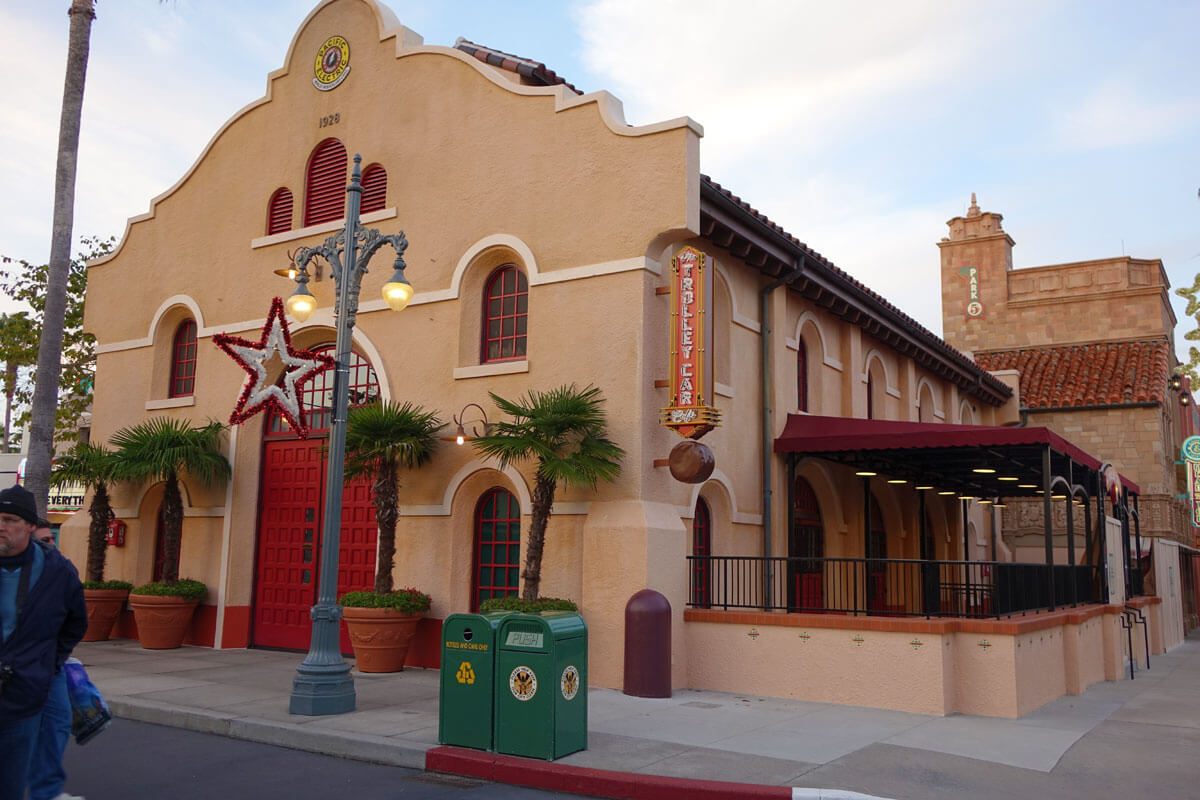 Although we are losing the Sorcerer’s Hat, we are gaining a Starbucks at Hollywood Studios. Construction walls have come down around the nearly completed coffee stop. The new location will be called the Trolley Car Café, an homage to the classic trolley cars of Los Angeles. The new Starbucks is set to open in February in its prime location on the corner of Hollywood and Sunset Boulevard. Until then, guests can get their coffee fix at Starring Rolls Café, just across the street from the soon-to-be-Starbucks, or at the Writer’s Stop over by the Streets of America. 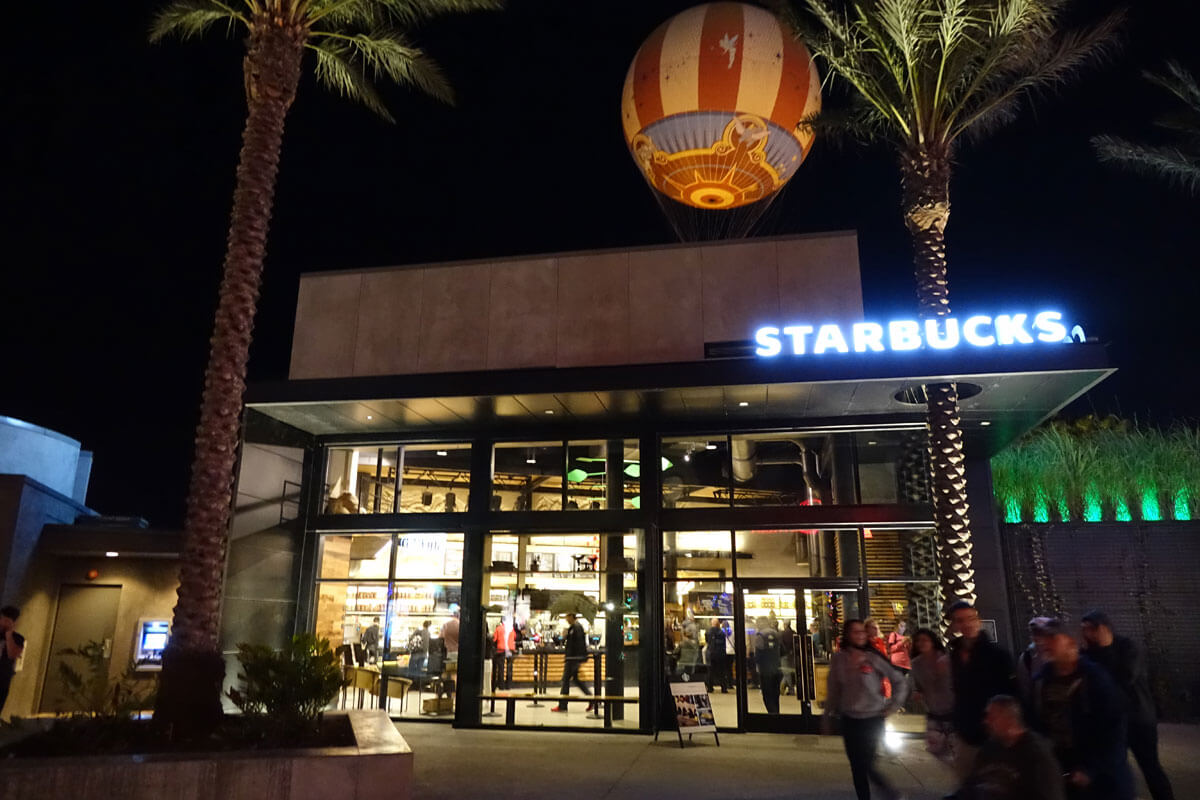 Another Disney Starbucks is making news with a new dining experience. The Starbucks at Downtown Disney's West Side is now hosting Starbucks Evenings. After 4 p.m. until regular closing hours, guests can enjoy craft beers, a selection of white and red wines, and small plates along with their lattes and frappuccinos. 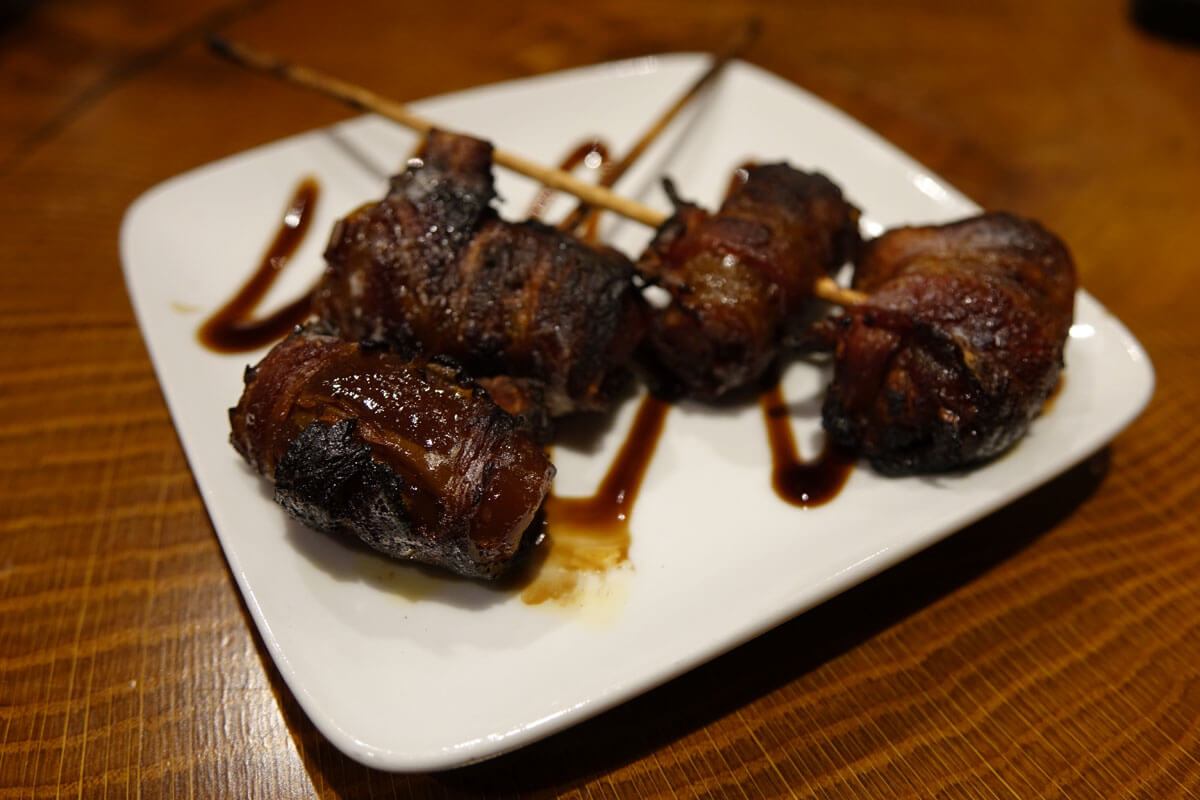 The menu includes savory tastes such as bacon-wrapped dates, grilled vegetables with lemon parsley aioli, and truffle macaroni and cheese. Flatbreads and a cheese plate are also available as well as decadent double chocolate brownie bites and rich chocolate truffles. The Downtown Disney West Side location is the only store in Florida currently participating in Starbucks Evenings. 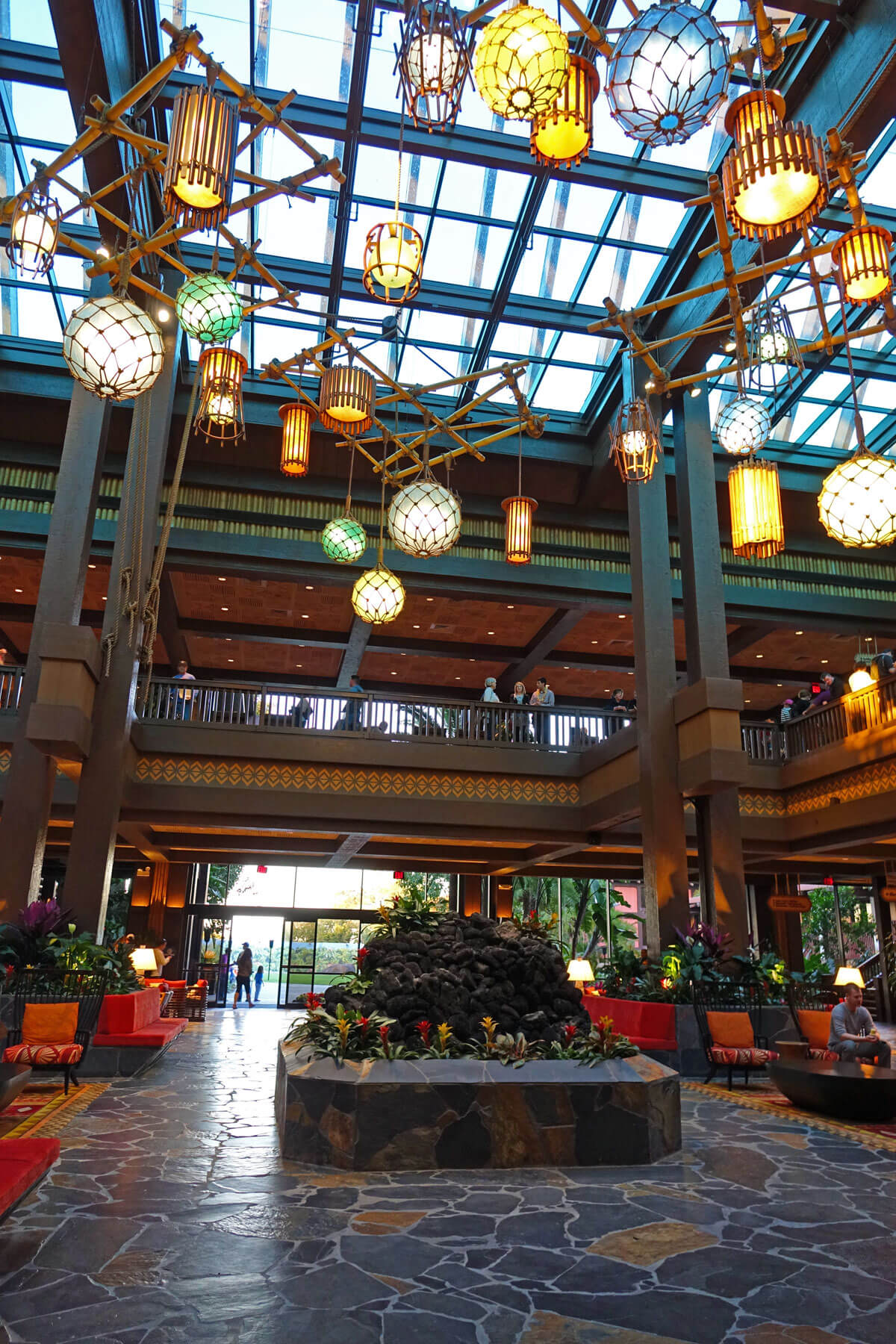 Construction continues at Disney’s Polynesian Village Resort, but much progress has been made since the project began. The lobby area has colorful new chandeliers and lots of cozy seating.  The construction walls have been removed throughout the interior of the Great Ceremonial House with new seating upstairs near the Tambu Lounge, an expanded merchandise shop, the updated Captain Cook’s quick service restaurant, and the new Pineapple Lanai Dole Whip stand. 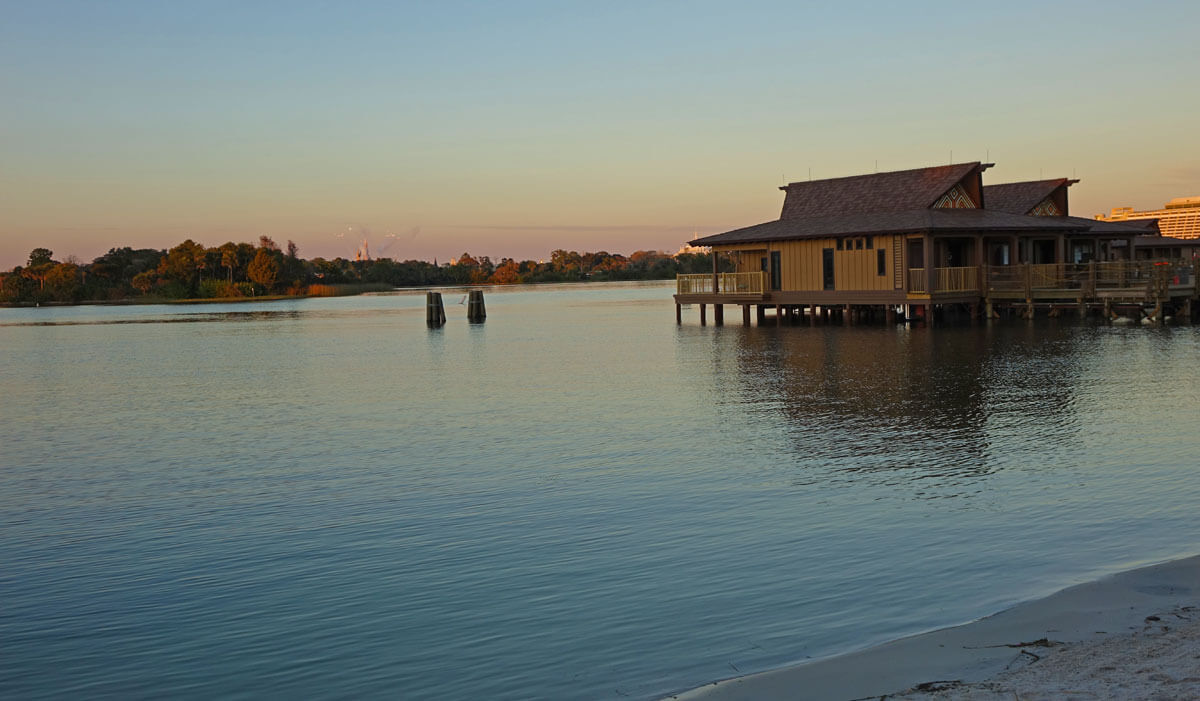 Outside, construction continues on the main pool and beach area with a small section of sand still open for guests to enjoy and view the Magic Kingdom fireworks from across the lagoon. The new bungalows are nearing completion and are set to open in April, but the main pool area is still undergoing major construction. The enhanced pool with a new deck area, slides and hot tub is set to open later this year along along with the much-anticipated Trader Sam’s Grog Grotto, based on the Disneyland Hotel favorite bar and eatery. Trader Sam’s is one of my Disneyland favorites, and I can’t wait to see what the East Coast version has in store! Kungaloosh!

This year promises to be a big year for Disney films, with highly anticipated movies  such as the "Avengers: Age of Ultron," a new Star Wars film as well as many others. Beginning Jan. 17, Disney’s Hollywood Studios will be giving guests a sneak peek of the upcoming live action "Cinderella" directed by Kenneth Branaugh and starring Lily James of Downtown Abbey fame, and Game of Thrones actor, Richard Madden, along with award-winning actresses Helena Bonham Carter and Cate Blanchett. This special sneak peek can be seen in the ABC Sound Studio through the end of March. Cinderella’s Golden Carriage will also make its way to Disney’s Hollywood Studios after its holiday season stint at the Magic Kingdom. The gilded carriage will reside in the Streets of America from Feb. 1 through April 11.

This year is full of changes and new experiences throughout Walt Disney World. We can’t wait to see what else Disney has in store for 2015! Check back on the blog tomorrow to see what else is coming to all of the Orlando parks this year.

In the meantime, we'd love to hear your thoughts about the end of the Sorcerer's Hat era, the changes to Disney's Polynesian Village Resort and any other Disney World changes right here in the comments!