Almost everyone who visits Walt Disney World will take home at least a few souvenirs. The variety of options in the Disney shops seems limitless and can be overwhelming when you are trying to select one or two items as a memento of your visit. Also, given the cost of a souvenir, you want something that will still seem as neat when you get it home as it did when you were in the parks. Here are several suggestions for souvenirs that we really liked and feel have staying power.

Silhouettes at the Magic Kingdom 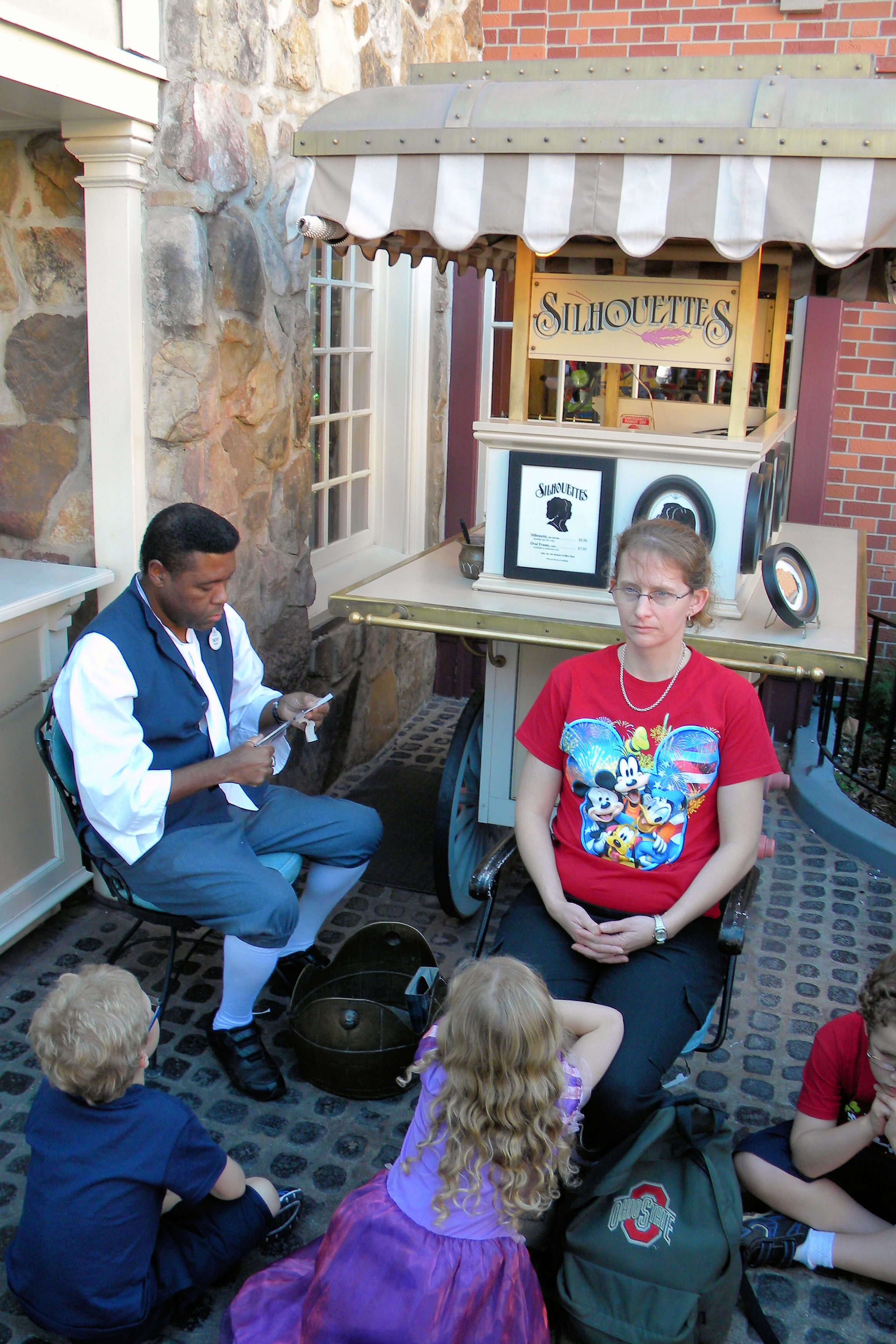 A neat memento of your trip to the Magic Kingdom is a silhouette from one of the two silhouette artists in the park (about half-way down Main Street USA and just across the bridge from the hub into Liberty Square). It was only $8 a person to have this done in November 2012, and a few dollars more for a frame. For a family of 5, it took less than a half hour to complete and was under $50. In addition, we received two copies of the silhouette (mirror images) because we had multiple people done. 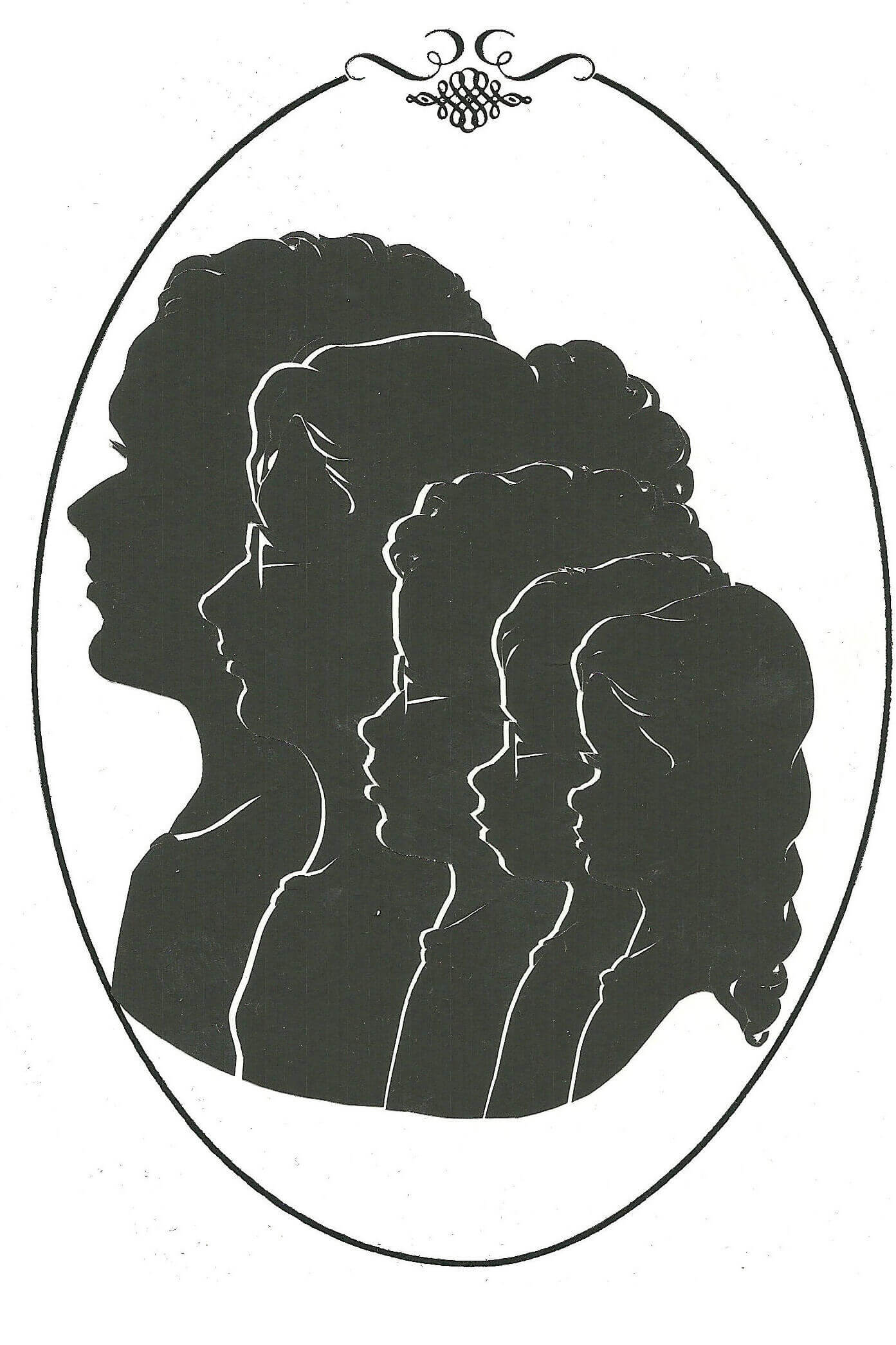 For anyone interested in the Victorian era or before, this is a great item because silhouettes were commonly done at that time, but it is rare you see this art form now. My family participates in Civil War re-enacting, so we definitely wanted to obtain one to display in our living room. If you watch carefully in Disney's "A Christmas Carol," you will see silhouettes hanging near the door in the Cratchit home when Scrooge is watching the family's Christmas day celebration. They are most noticeable when Bob comes through the door, arriving home from church.

A nice memento of the trip for kids is a small photo album filled with favorite pictures that they select from the vacation. For each of my kids we purchased a Disney themed picture album at Hallmark that held thirty-two 4x6 pictures. I let them select the pictures they wanted, then printed them off and filled up their album. They love looking at their pictures and it works out very nice for them to sit with a grandparent and narrate to them about their trip. The kids give much more detail and have additional stories to tell by having the picture album than they would otherwise. 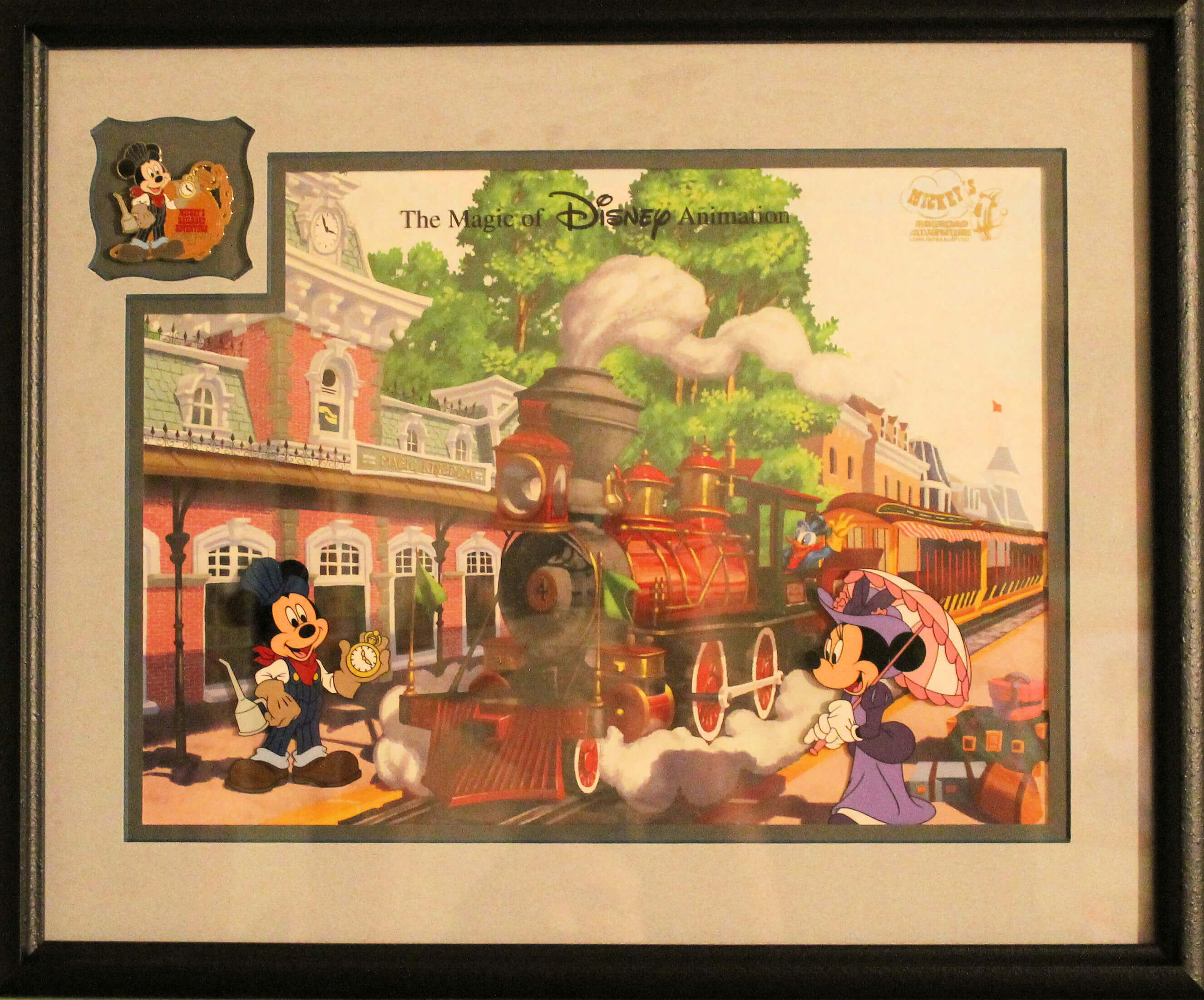 A magnificent keepsake of your visit to Walt Disney World is a limited-edition animation cel produced the year of your visit. Disney creates several limited-edition cels each year, which have an imprint showing the year of the edition. There are a variety of characters and themes illustrated on the cels, so you should be able to find one that catches your eye. While these cels are a bit pricey (about $225 for one that is framed), what could be more representative of Disney and a better souvenir of your visit than an animation cel? Plus, they make for a beautiful picture to hang on your wall. It will remind you of your visit and is also a wonderful conversation piece. These are available at the Animation Gallery near the Art of Animation in Hollywood Studios, as well as a few other locations. 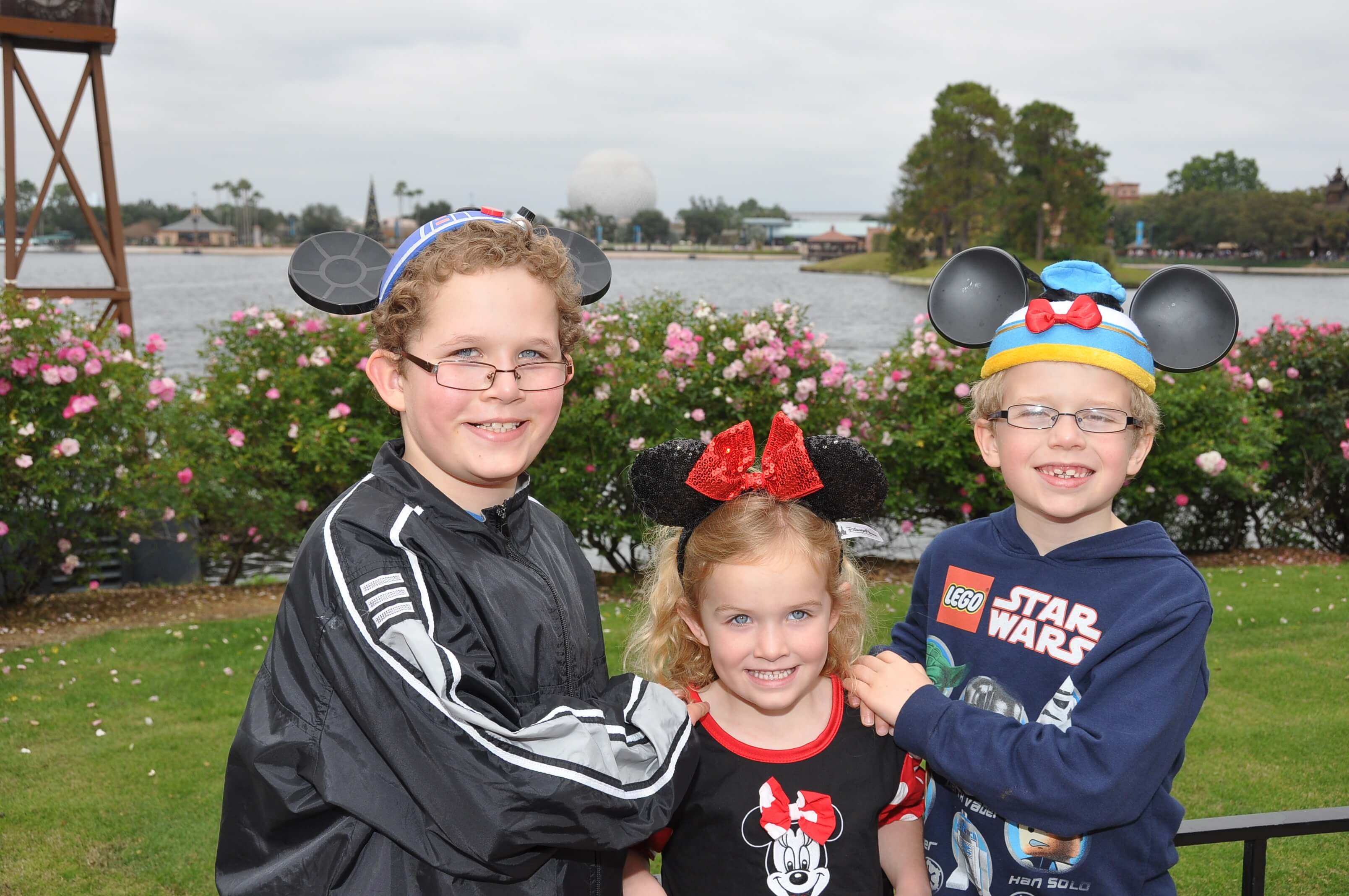 On our first day at Walt Disney World, I did not purchase the iconic Mickey Mouse Ear hats for my children because I did not want to have to deal with keeping track of the hats or being concerned with them coming off on a ride. At the end of our second day, I needed to purchase a Minnie Mouse Ear hair band for my daughter to wear with her Minnie Mouse dress the next day.  Since we were buying this for her, we let our two boys each pick out a Mouse Ear hat. To my surprise, the hats had an elastic chinstrap that secured the hats to the boys' heads so there was no need to worry about the hats getting knocked off on a ride. The boys wore their hats for the remainder of the trip and I wished I had purchased the hats the first day we were there. One advantage with the boys each wearing a hat (one had a Donald Duck themed hat while the other's was R2-D2 themed) was that they were much easier to spot and keep track of as we wandered around the parks. To obtain additional use from the hats after arriving home, I tied string around the ears, placed crumpled tissue paper inside the hat, and then used the string to hang the hats up on our living room wall. The kids are reminded of our Disney World trip whenever they see the hats. 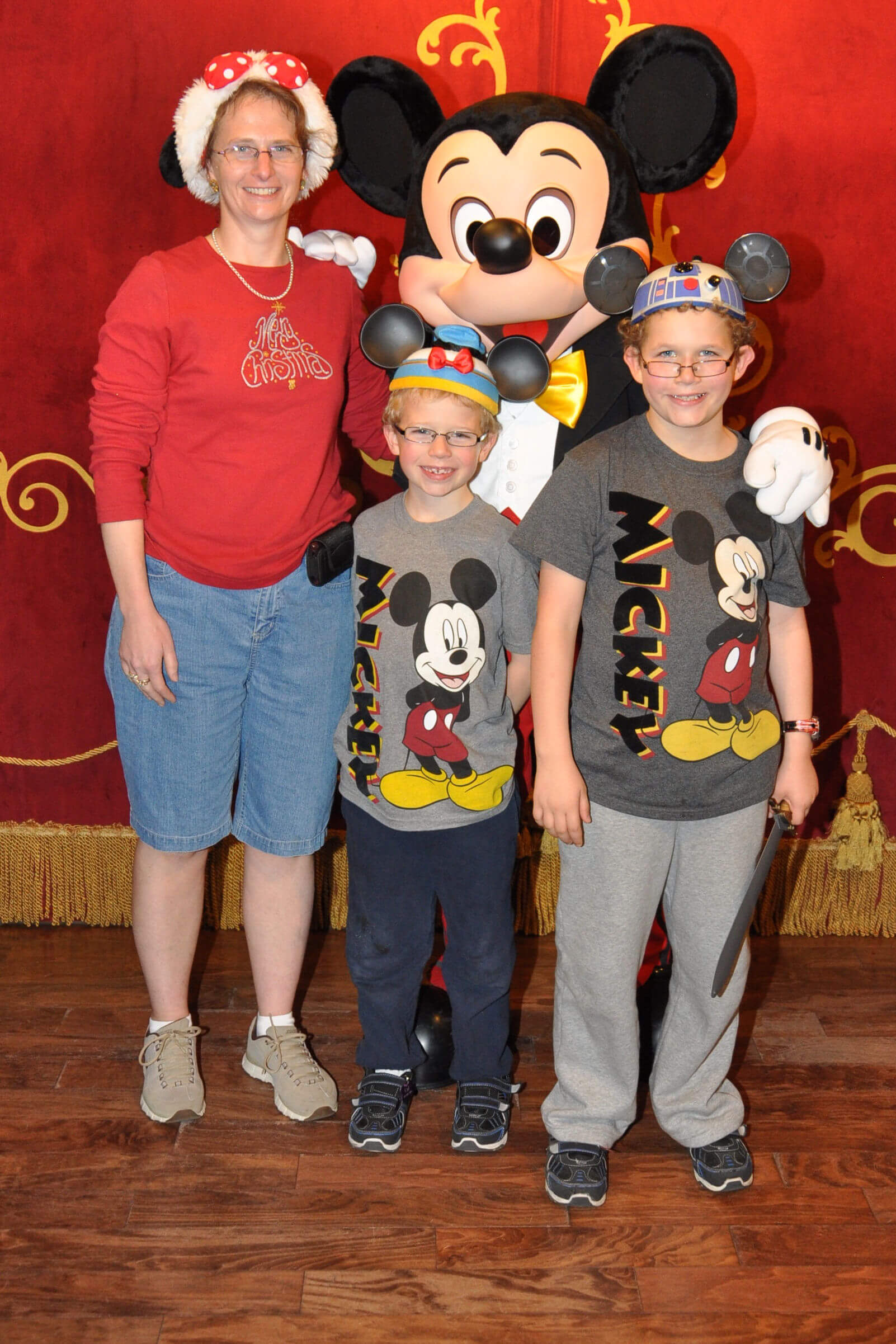 One way to save money on souvenirs and to have Disney shirts for your trip is to purchase T-shirts before you leave from a store like Wal-Mart. While our local Wal-Mart did not have any shirts, we were able to purchase a variety of nice kids' Disney character T-shirts from the Wal-Mart website for about $8 each (including shipping). This was significantly less than any shirts at Disney World, plus the kids had them to wear at any time during our visits.

These are my favorite Disney World souvenirs. What have you found to be the best souvenirs for kids? Share in comments below. You’ll find more information inside the Undercover Tourist Planning Pages.

Vern and his wife are the parents of two boys and a girl that all love Disney’s animated movies and shorts.  He lives in Ohio and is employed as a mechanical engineer, which helps to explain his excessive attention to detail, organization and planning.  His oldest son enjoys watching the animated shorts from the Disney Treasures series, his youngest son has the middle name “Donald” and he likes telling people that he was named after Donald Duck, and his daughter loves the Disney Princesses, especially Rapunzel and recently Elsa.