If you missed the news, a classic Disneyland experience made its way to Disney World this past spring! Trader Sam's Grog Grotto opened up shop at the Polynesian Village Resort, with a grotto full of ancient artifacts, exotic treasures and abundant surprises. Yes, that’s the same “head” salesman, Trader Sam, who’s always looking for a 2-for-1 deal at the end of the World Famous Jungle Cruise. Since its opening, Trader Sam's Grog Grotto has been a popular place, and for us frogs, it's now a Disney must-do! 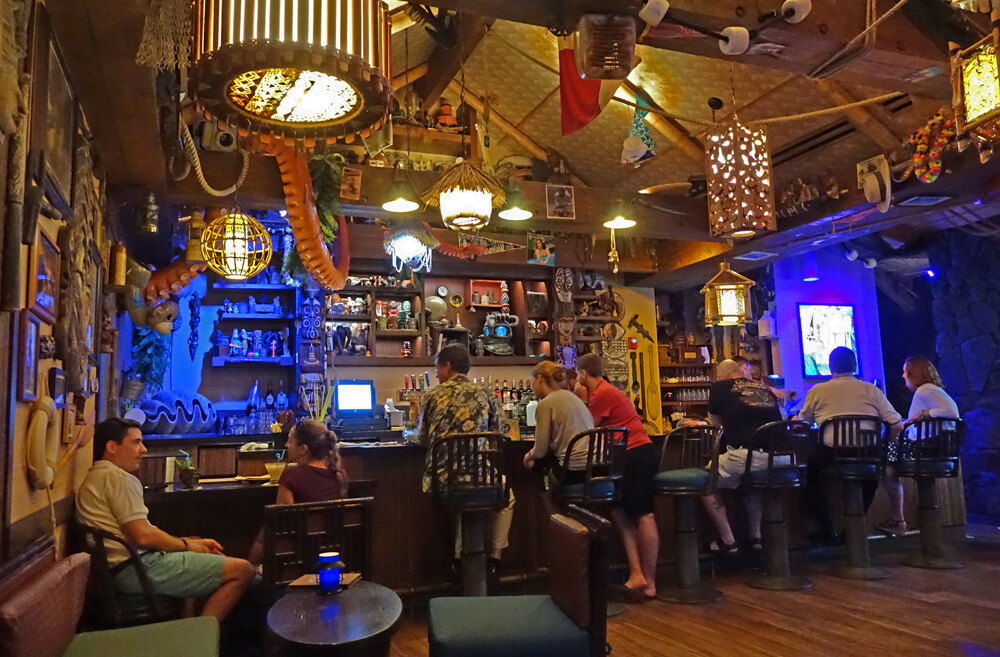 The intimate alcove seats about 50 people amid its bar, high tops and cozy couches with tiny tables. With such a small space, you can expect a wait, especially later in the evening. If the bar is full when you arrive, you'll be given a pager and can head for the Tiki Terrace outside. When enough people leave, you'll be ushered in to their empty spots, and you just might find yourself meeting your new best friends. 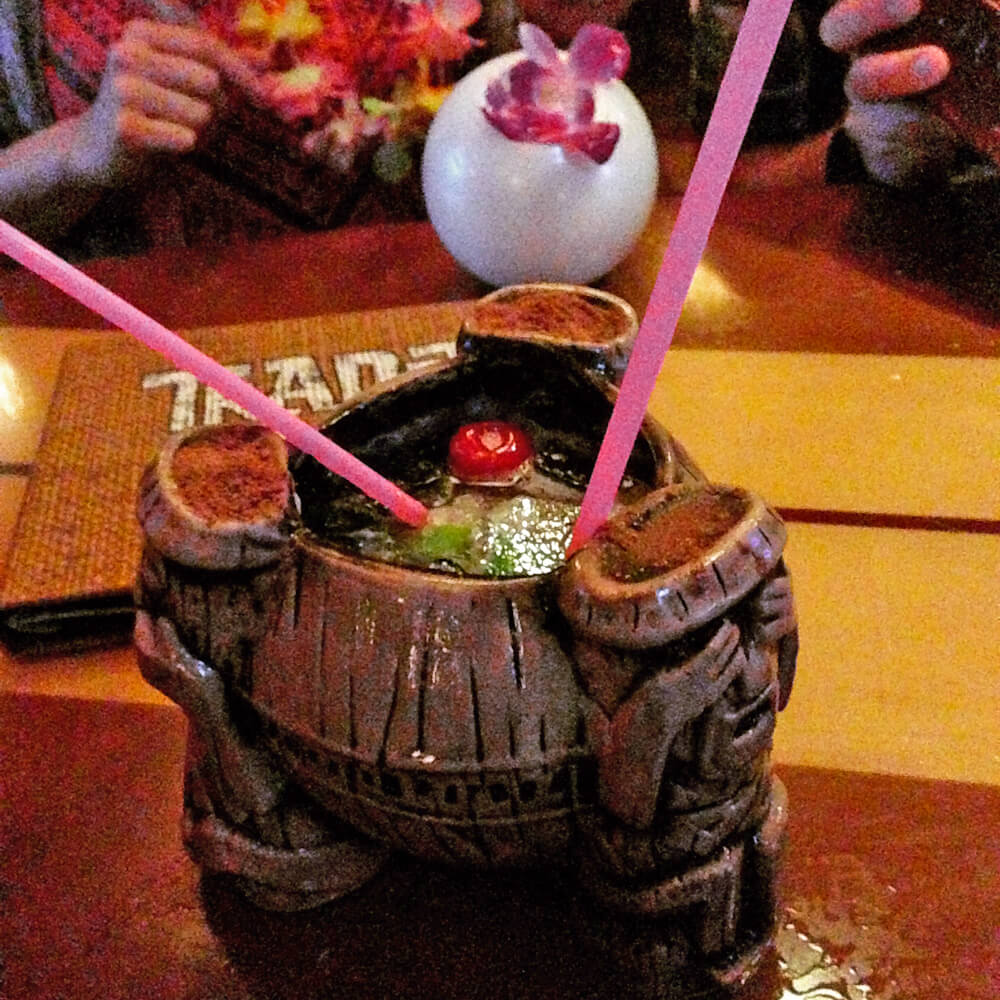 Wherever you settle in for the evening, surprises await, from the storms of the deity Uh-Oa! to a huge “did that thing just move?” tentacle. As your drink order is served, the bar comes to life as the servers swim through the seas in inflatable inner tubes alongside the Nautilus or protect unsuspecting patrons from the tree-climbing HippopotoMai-Tai with their finger guns. “Pew pew! Two shots of rum!” With every order comes a side of unexpected fun!

These boisterous drinks are not just smoke and mirrors either, they are tantalizing concoctions that blend fruity South Seas flavor with exotic spices. My favorite, The Polynesian Pearl, is a tangy combination of RumChata Cream Liqueur, Grand Marnier and cinnamon mixed with tropical juices, served in a souvenir pearl-shaped glass. Every cocktail enhances the theme of this unique little bar as they are served in unusual vessels from the classic tiki mug to a shrunken zombie head. The bar also serves beer and wine as well as non-alcoholic beverages for those who do not wish to imbibe. The Skipper Sipper, Schweitzer Falls and Polynesian Punch are all fun non-alcoholic blends for anyone to enjoy. 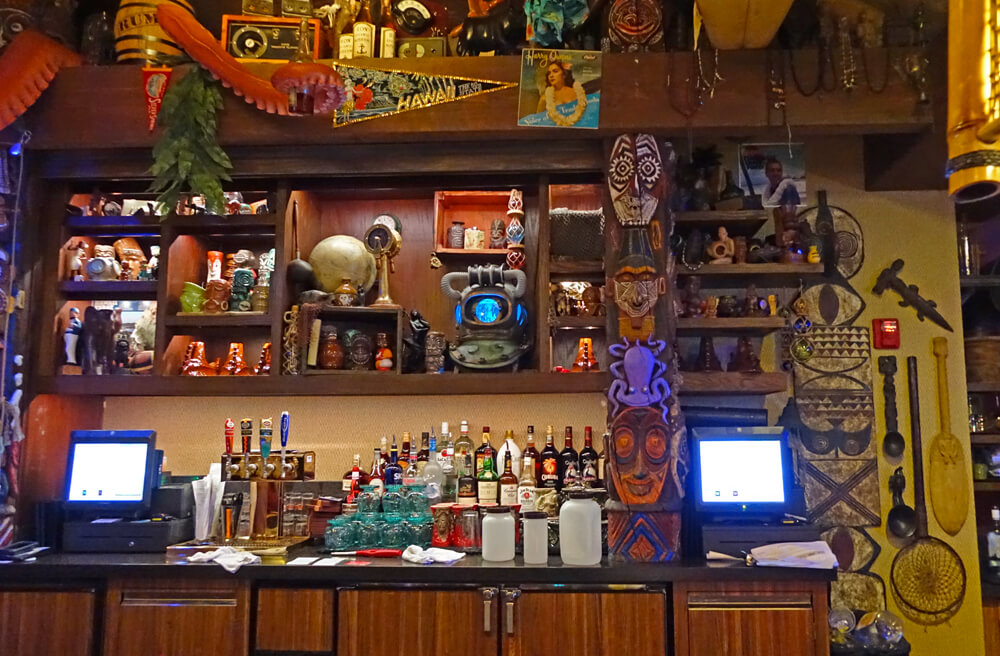 Trader Sam’s welcomes guests of all ages until 8 p.m., after which the bar admits guests 21+ only. A quiet night at the bar this is not! Expect plenty of pun-y quips from the friendly wait staff, who no doubt got their training as Jungle Cruise skippers. If you are looking for wind-down time after a long day in the parks, you're best bet is to head to the Tambu Lounge on the second floor of the Great Ceremonial House. 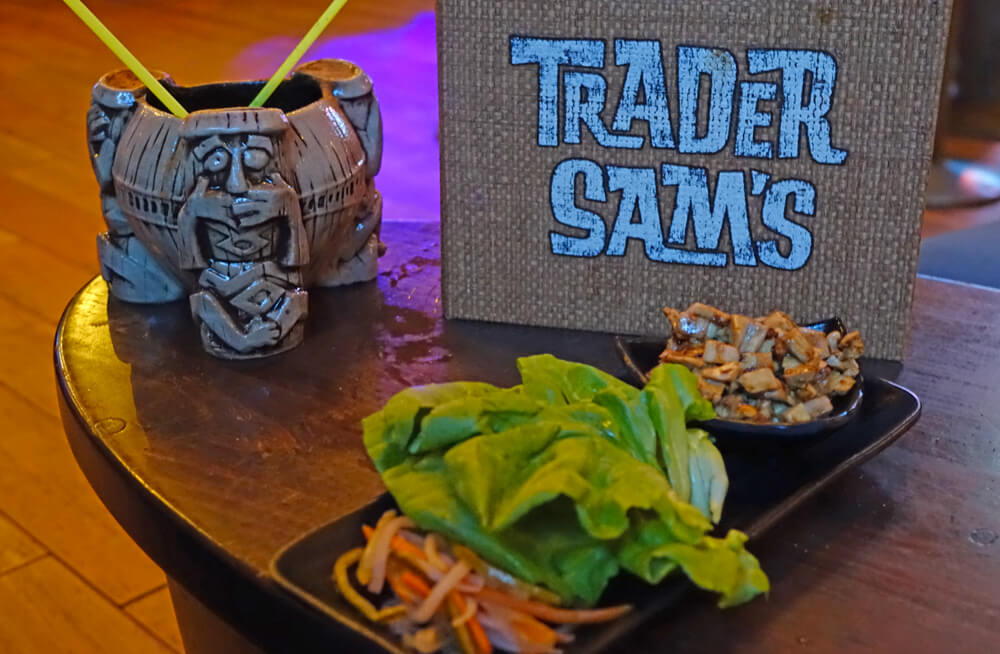 There's nothing typical about Trader Sam’s Grog Grotto, and that extends to the adventurous array of appetizers. The chicken lettuce cups are a welcome change from heavy bar food, although we did have to ask for more lettuce to accommodate an abundance of toppings. (Certainly not the worst problem to have!) The Hawaiian Poke was refreshing and flavorful served with crispy puffed crackers. If ordering the Kalua Pork Tacos, be sure to ask for an extra plate and lots of napkins. Though delicious, this one can be messy. The Headhunter Roll will delight sushi lovers, while those with slightly more Western tastes might enjoy the Corn-battered Portuguese sausage with curry ketchup. These appetizers take tastebuds on a culinary adventure!

If you long for the open sky and the smell of the sea to accompany your Krakatoa Punch, head outside to the Tiki Terrace. Relax while listening to live Hawaiian music and the melodic gushing of a nearby waterfall. The two share a menu with the exception of the Spikey Pineapple, a combination of rum and pineapple soft-serve, that is only available at the Tiki Terrace. Both Trader Sam’s Grog Grotto and the Tiki Terrace open at 4 p.m. and close at midnight. Arrive earlier if you don't want to wait. So, throw on that Hawaiian shirt and toss your cares to the wind as you set sail for Trader Sam’s!

The opening of Trader Sam's Grog Grotto was a major addition to Disney's Polynesian Village Resort, which has seen major refurbishments in the last year. Check out everything that has opened in 2015 and what's still to come later this year at the Polynesian and the rest of Disney World.