My Favorite Disney World Snacks & Where to Find Them!

Disney World absolutely delights with the sheer number of confections and temptations, many of them available at the snack carts throughout the park. Who is immune to these temptresses on wheels offering snacks such as churros, popcorn, cotton candy, ice cream and more? And dare I mentioning the stationary temples of edible awesomeness all over the Kingdom of the Mouse? It is hard to pick my favorite Disney World snacks, but here are my fab fives. 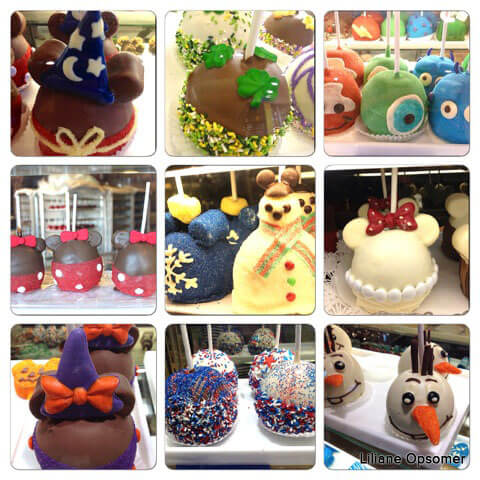 I am obsessed with this snack for it is not enough to eat it, no I must photograph the caramel apple! Disney certainly makes sure I am not getting bored. There is an apple for every occasion, every holiday, every movie. You can find them at various locations at Disney World, including Main Street Confectionery and Big Top Treats at Magic Kingdom, Candy Cauldron at Downtown Disney, Karamell-Küche at Epcot and Beverly Sunset at Disney's Hollywood Studios.

Did you know that caramel apples were invented as a result of an experiment with leftover holiday candy? Dan Walker, a Kraft Foods employee, is credited for the recipe. He simply melted excess caramels from Halloween, added apples, and the rest is history. For the first decade, caramel apples were made by hand, but in 1960, Vito Raimondi from Chicago, Illinois made and patented the first automated caramel apple machine. Want to make your own? Check out this recipe! 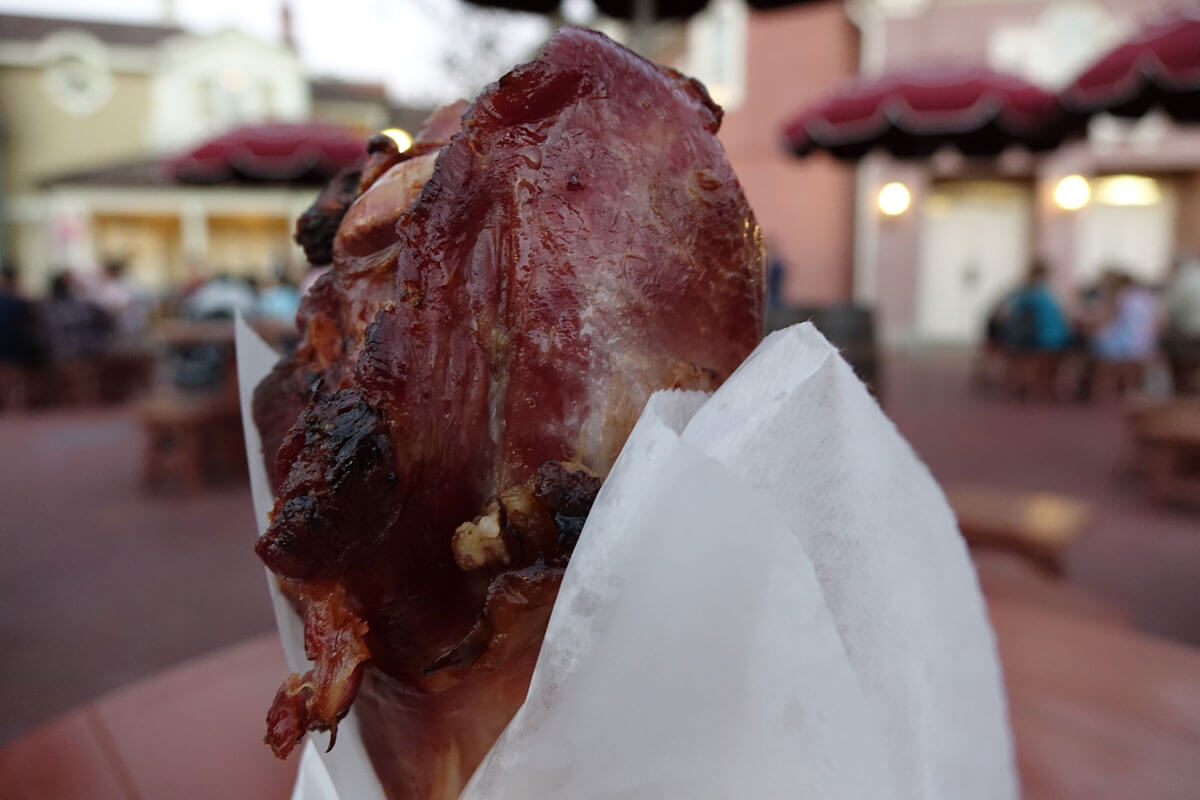 Disney’s biggest hit is no ride, it’s smoked turkey legs! Did you know that more than 1.6 million turkey legs are consumed every year in the six Disney Parks at Walt Disney World and Disneyland? They are such a favorite that they have their own merchandising, hats, pins, T-shirts ... you name it! The giant turkey legs were for the longest time also a great deal, but the prices of the giant meat-on-a-stick have gone up considerably in the past two years. While you can find them at all of the parks, my favorite turkey leg place is Flame Tree Barbecue, the leg sets you back $9.75, and the platter (served with Coleslaw and Baked Beans) is a whooping $12.79. Gobble, gobble! 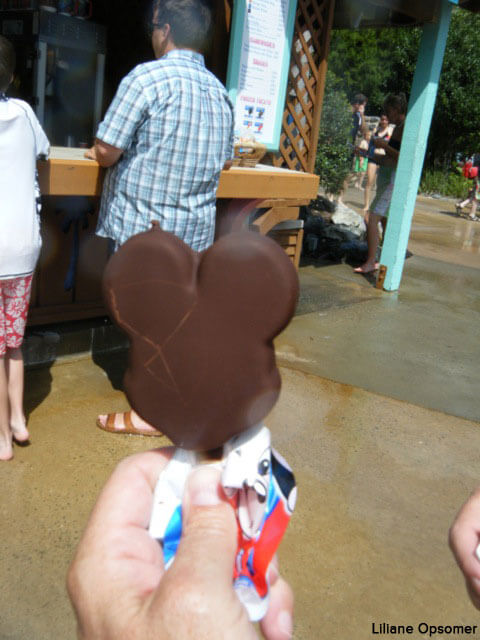 For those who haven’t tried one, a Mickey Premium Bar is pure heaven. Simple, yet all you ever wanted in the sweltering Florida sun: vanilla ice cream on a stick dipped in chocolate. Like the turkey legs, Mickey Ice Cream Bars have become icons and have a merchandising line of their own. The ice cream bar has been featured on T-shirts, hats, Christmas ornaments and is even available as an air freshener. You can find them at your nearest snack cart. If a simple ice cream bar is not your thing, a sophisticated upgrade would be an Ice Cream Martini at L’Artisan des Glaces at the French Pavilion in Epcot. Think Ice Cream Sorbet floating in Grand Marnier ... you get the picture. 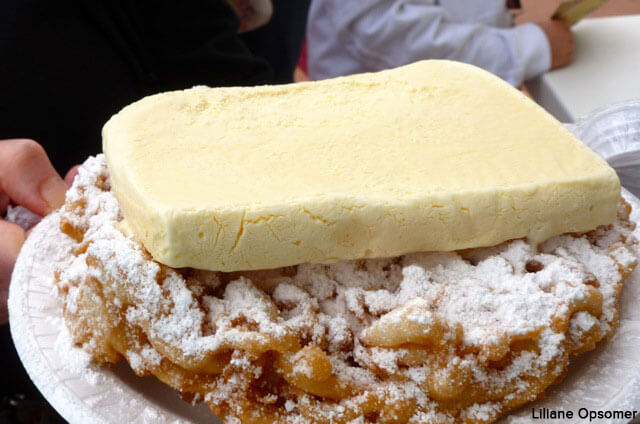 Now I know this snack is nowhere to be found on my Weightwatchers Diet, but I have fallen for this mega desert when visiting Epcot prior to a runDisney race. The excuse? I needed pre-race carbs! You'll find the funnel cakes at the American Adventure pavilion at Epcot, Sleepy Hollow Refreshments in Magic Kingdom and Oasis Canteen at Disney's Hollywood Studios. If you really want to splurge, make it a Funnel Cake with a slap of ice cream on top. It is simply delicious and easily feeds a family of four.

5. Chocolate covered Marshmallows on a Stick 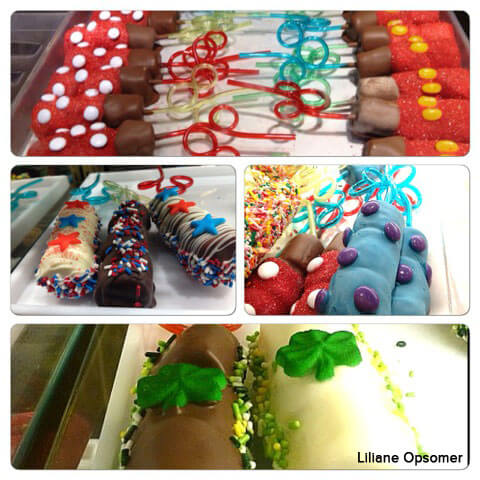 We all have tried the roasted-over-the-fire version, but these are simply always available and so good. Like the caramel apples, Disney has elevated these chocolate covered marshmallows to an artwork and you can usually find them at the same locations. Toppings and colors change with the seasons and new fabulous tasting sticks seem to pop up all the time.

Why did I say fab fives? What about the chocolate covered strawberries? The succulent sticks of pineapple, which like the strawberries, have been enrobed in the food of the gods? And last but certainly not least the Chocolate Covered Frozen Banana? While I realize that the last three Disney World snacks do not get me off the hook when it comes to healthy recommendations, one must admit that I did not suggest you go for Beaches & Cream’s famous Kitchen Sink now, did I?

Related: Easy Mickey Marshmallow Pops for Your Next Party!

Related: The 5 Yummiest Treats at Magic Kingdom and Where to Get Them

Liliane Opsomer is a freelance writer and the co-author of “The Unofficial Guide to Walt Disney World with Kids,” a guidebook that provides planning and touring tips for a family vacation.