Most Filling Snacks at Disney World That Won't Break the Bank! 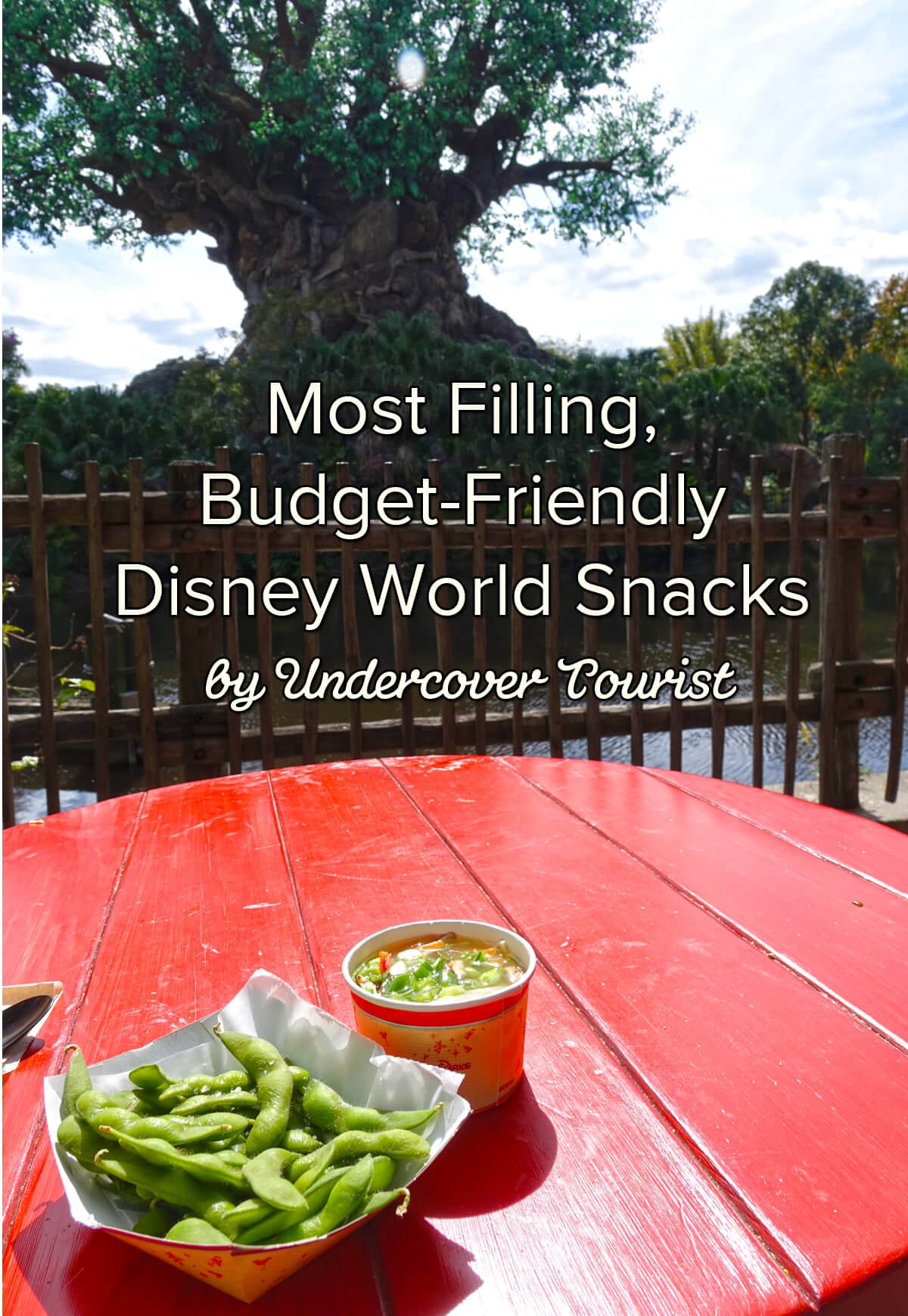 A trip to Disney World stimulates all of the senses, from the twinkling lights to the whimsical music, but what always delights me the most are the smells! Toasty popcorn and sugar-coated churros, those cinnamon-roasted almonds and the heavenly scent of chocolate in the air. I can’t help but indulge in a snack or two while I’m in the parks, but some tasty treats don’t hold me over for very long. Instead of wracking up spending on three big meals, we save money by getting hearty snacks instead of full meals.

Disney has some unique and delicious options that won’t break the budget. Here are the most filling snacks at Disney World that won't break the bank. At under $8, they offer the “most bang for your buck” when you're looking to save at Disney World.

Let's take a look at the most-filling snacks at Disney World (and where to get them)! 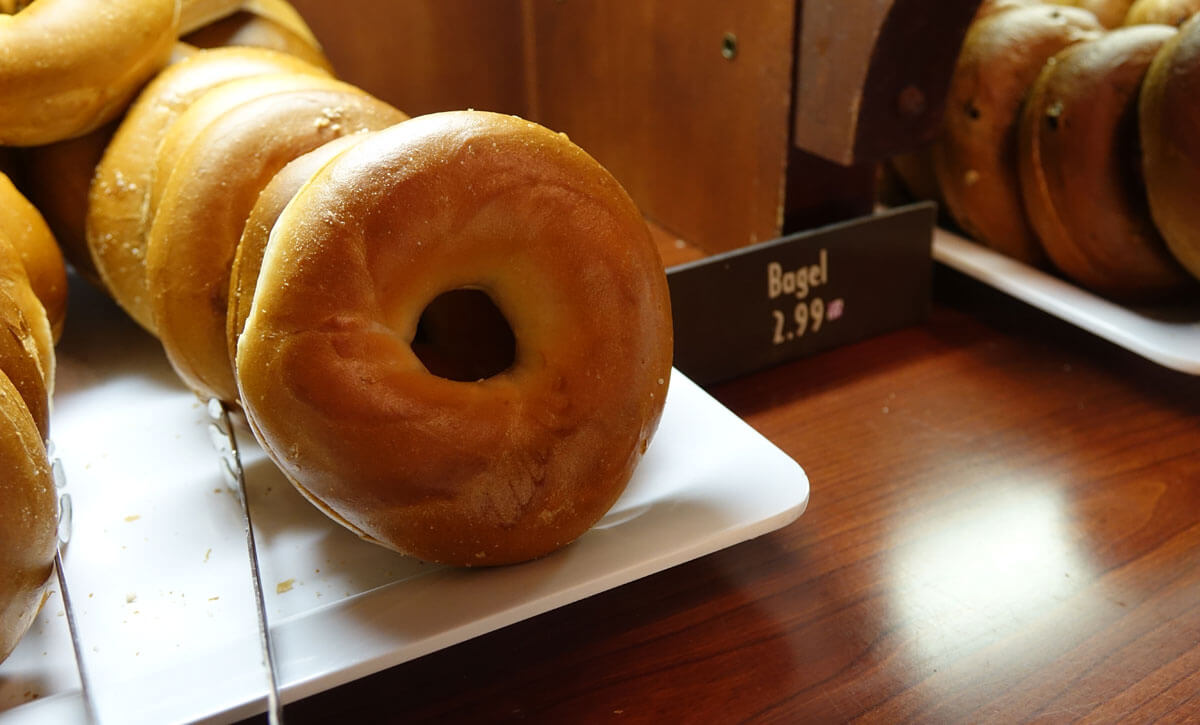 We try to always eat a a light breakfast in our hotel room, but occasionally we pick up grab-and-go breakfast at the park so we make it in at opening. A $3 bagel and some coffee keeps me satisfied until lunch and one of the most filling snacks at Disney World. 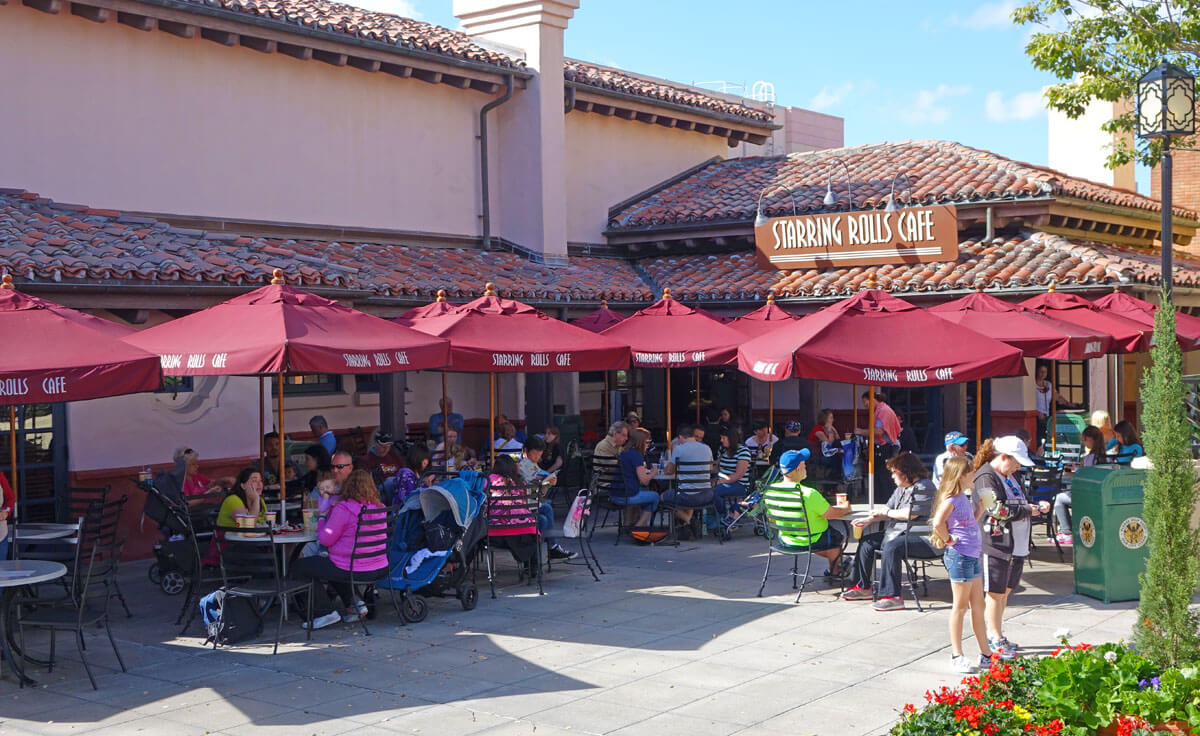 My favorite spot to grab this snack is at the Starring Rolls Café at Disney’s Hollywood Studios. It’s right on the corner of Hollywood Boulevard and Sunset Boulevard and a great little spot to watch the morning crowds if you have a moment. Then it's off to Toy Story Midway Mania or Tower of Terror!

2. Pretzel (around the parks) 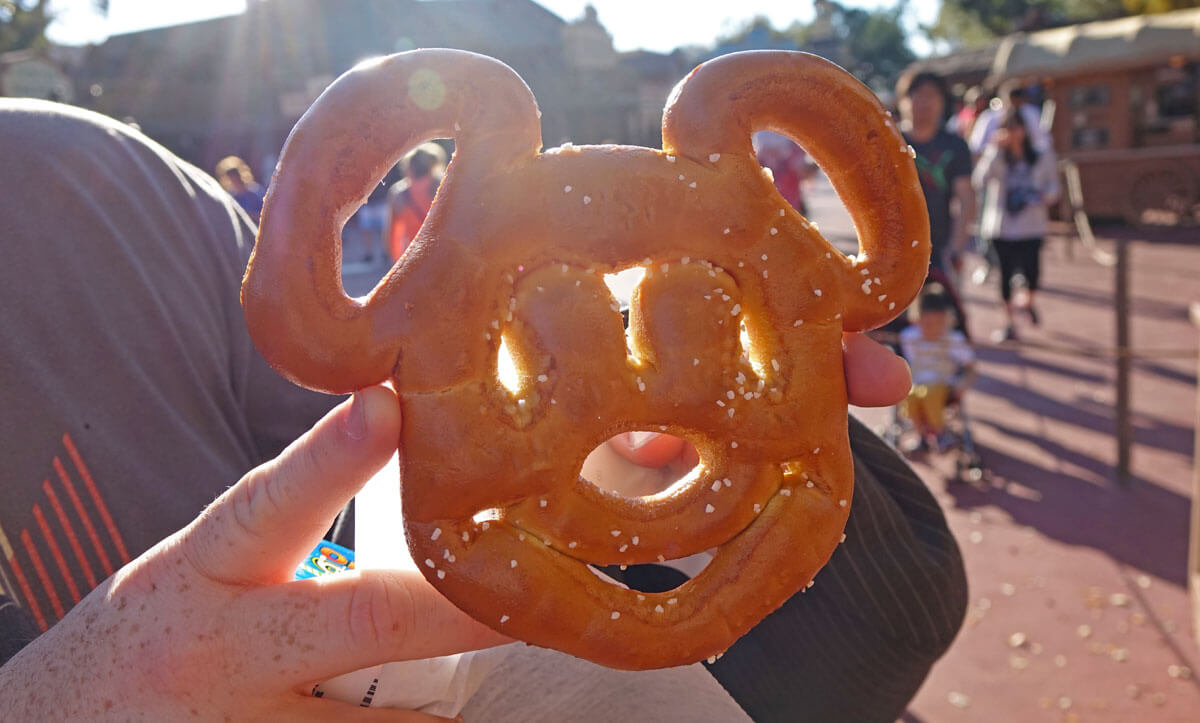 Pretzels are a filling snack that are available all over the Walt Disney World Resort. My personal favorite is the Jalapeno pretzel with cheese dip. This salty snack gets me through the afternoon, especially when I’m anticipating a big dinner. Mickey-shaped pretzels are less than $5, big enough to share and available in all four parks. Stop by the Germany pavilion in Epcot for the original twisted treat, a soft plain pretzel sprinkled with salt.

3. Edamame at the Gardens Kiosk 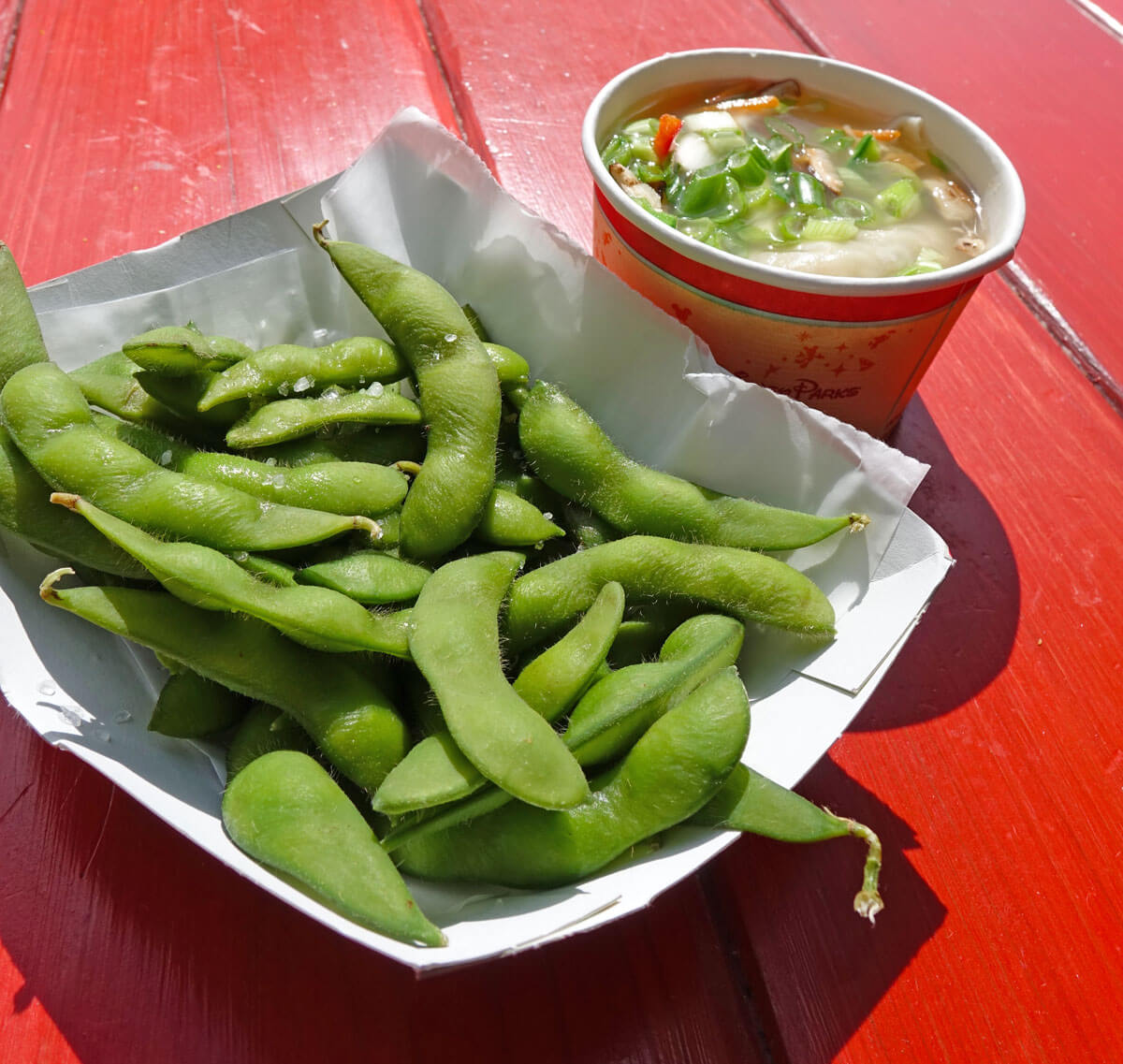 Disney’s Animal Kingdom is a great place for snacks, with a great variety and options for those with special dietary needs. There’s a whole cart catering to those looking for gluten-free foods. The two kiosks near Flights of Wonder at Disney’s Animal Kingdom are a snack mecca, especially for vegetarians and those wanting healthier options. It’s nice to have some lighter fare that won’t weigh you down or break the bank, like the savory edamame at under $4 and big enough to share. The stands offer options like a new Thai Coconut Curry soup that is also under $4 and a great snack, as well as samosas and hummus. Edamame can also be found in Epcot at the Kastura Grill in the Japan pavilion. 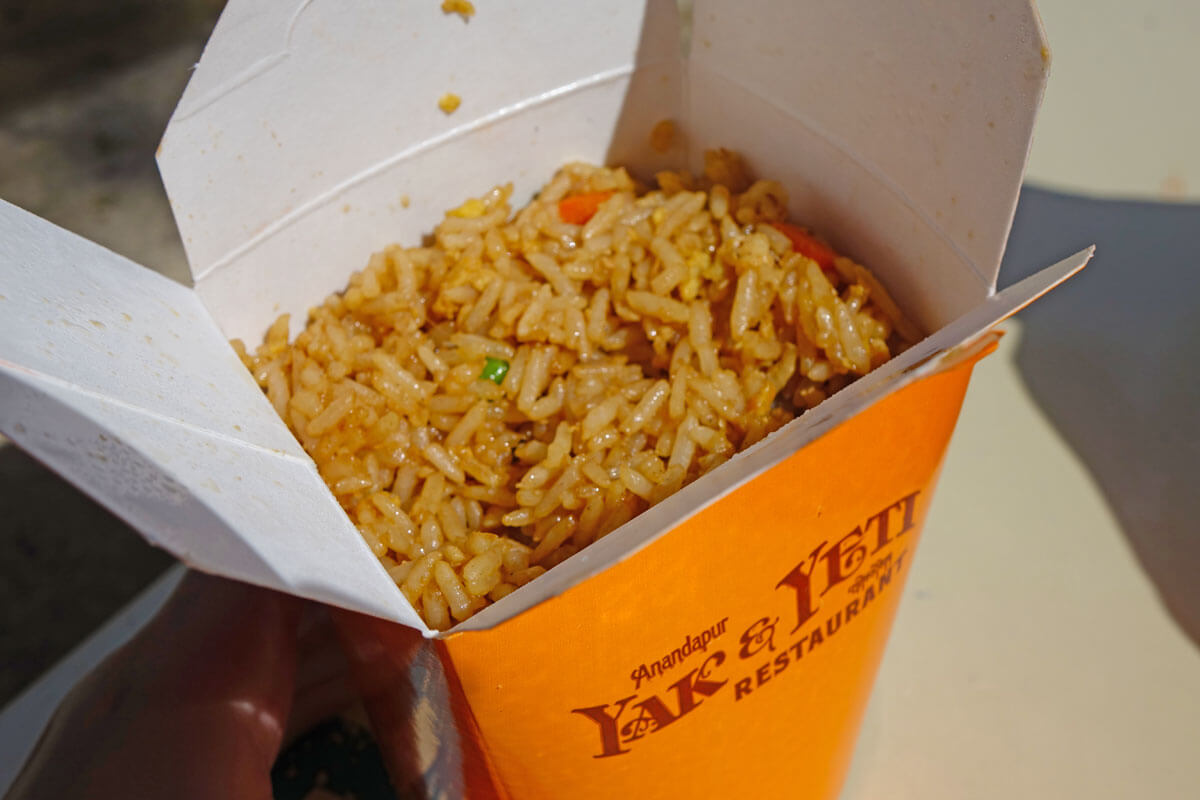 The Yak & Yeti Local Foods Café (right next to Yak and Yeti restaurant in Disney’s Animal Kingdom) offers some savory snacks that could easily serve as a meal. The Chicken Fried Rice is less than $4 and comes in an adorable take-out container. The classic mix of rice, eggs, veggies, and chicken can be livened up with your favorite sauces from the condiment counter. I like to add a packet of hot sauce for a little extra kick. 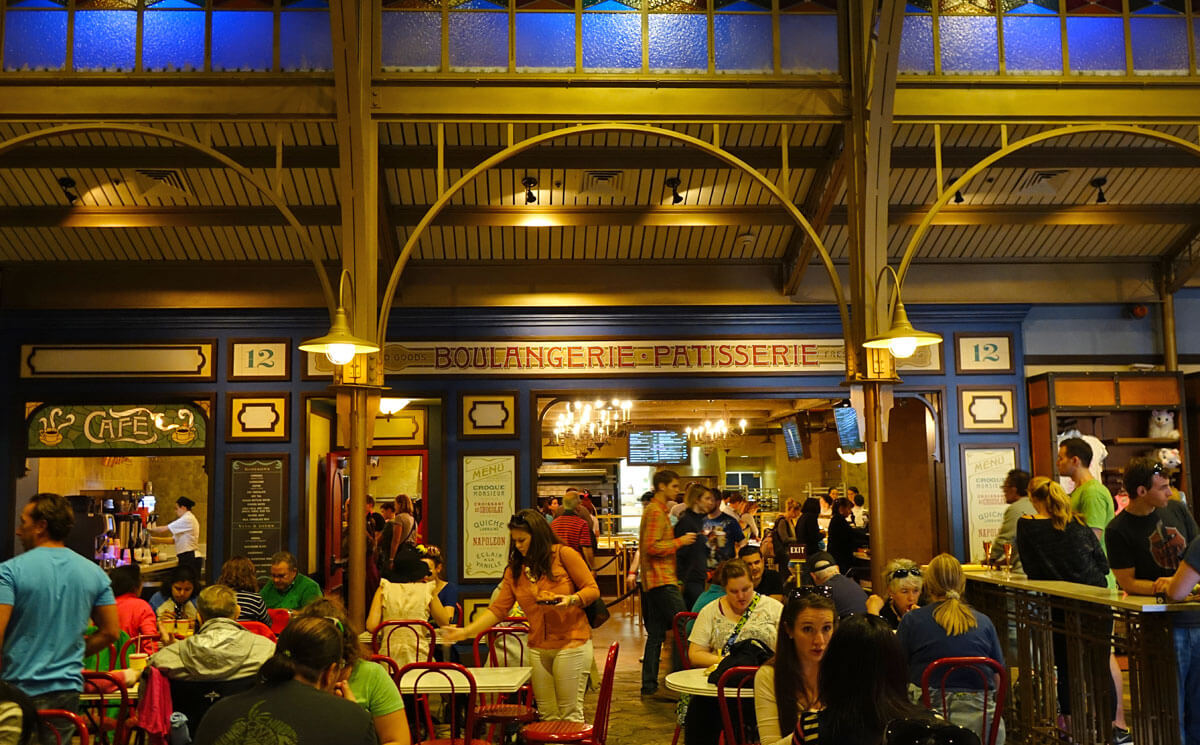 The French are famous for their culinary prowess, and lucky for us, Les Halles Boulangerie & Patisserie in the France pavilion at Epcot has case after case of delicious and inexpensive creations, many under $5. There are sweet pastries, buttery croissants and creamy soups, making the patisserie an ideal stop for the entire family to find their perfect snacks. 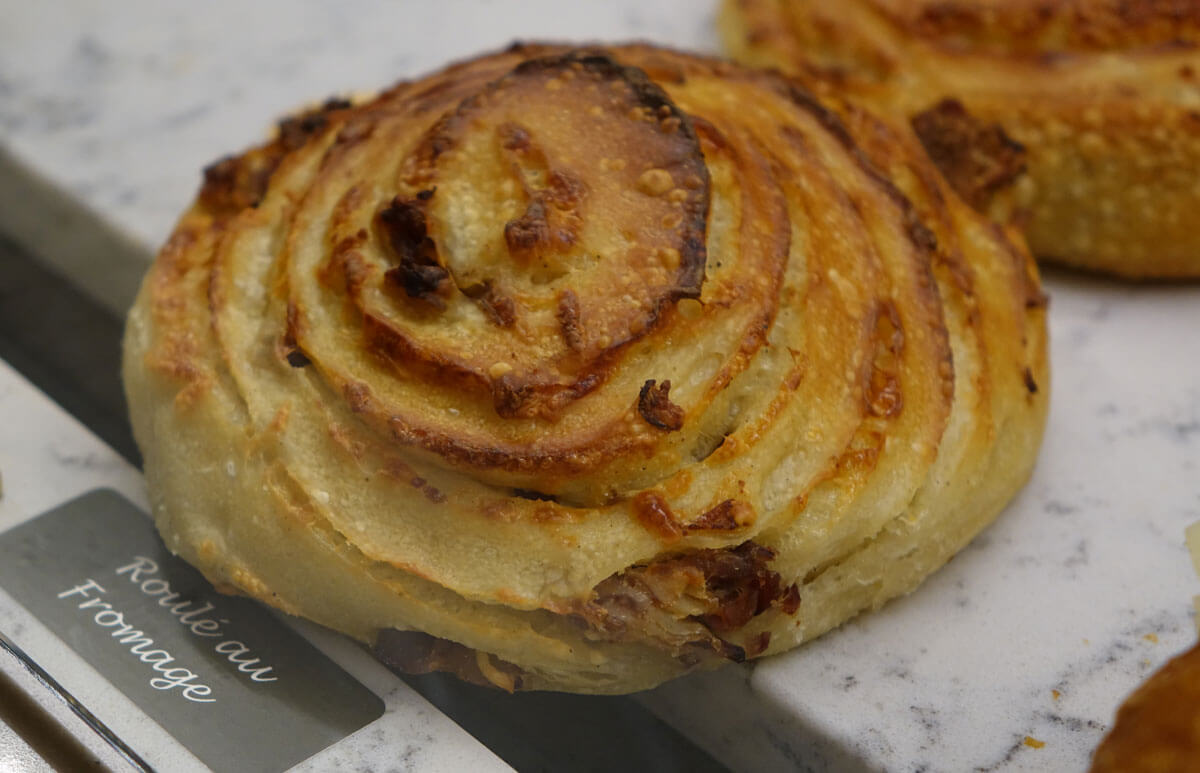 I enjoy resting at a bistro style table while nibbling on the Roule au Fromage, a swirled mini-baguette flecked with chunks of  ham and cheese, or if I’m in the mood for something sweet, the chocolate and hazelnut stuffed beignet, dusted with sweet powdered sugar. If you're entering the park from the Boardwalk area at International Gateway in the morning, Les Halles is open and a great place to pick up breakfast! 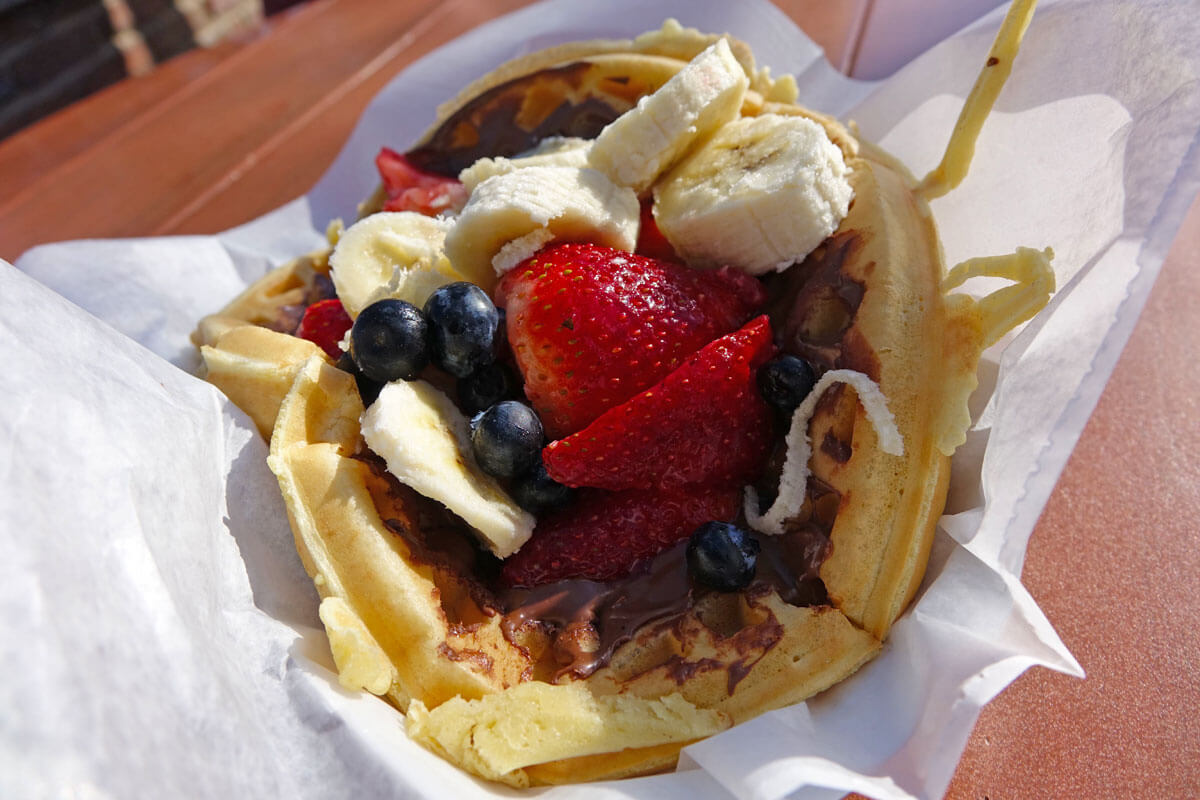 Okay, so this one is a bit of a splurge at just over $7, but it’s big enough to share as a snack for the whole family. The fluffy, freshly made Belgian waffle is slathered in silky Nutella and topped with sweet strawberries, banana slices, and plump blueberries. This sweet snack is available at Sleepy Hollow in Magic Kingdom’s Liberty Square. 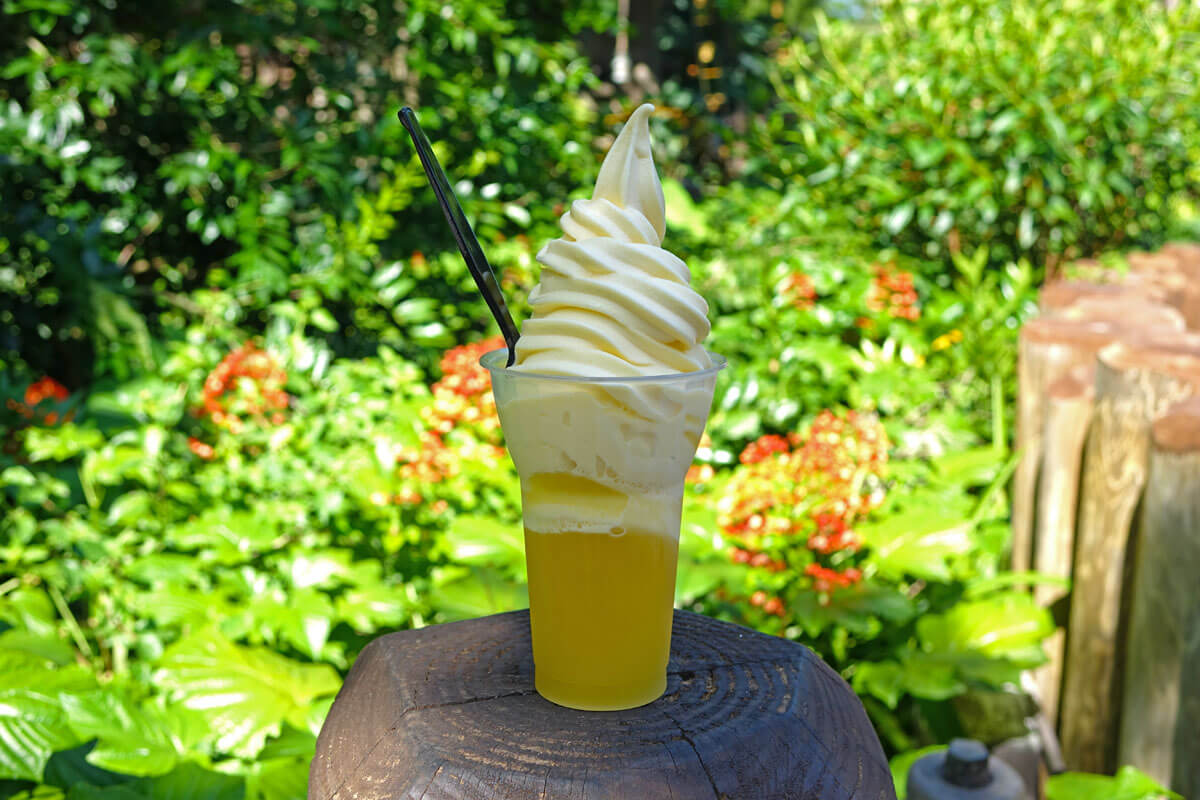 This original Disney snack is refreshing, satisfying, and under $5. There’s classic pineapple, orange, and vanilla, or you can get them swirled or as a float over Dole pineapple juice. I’m a fan of the pineapple-vanilla swirl! The fruity soft-serve is available at the Magic Kingdom in Adventureland and at Pineapple Lanai at Disney’s Polynesian Village Resort. 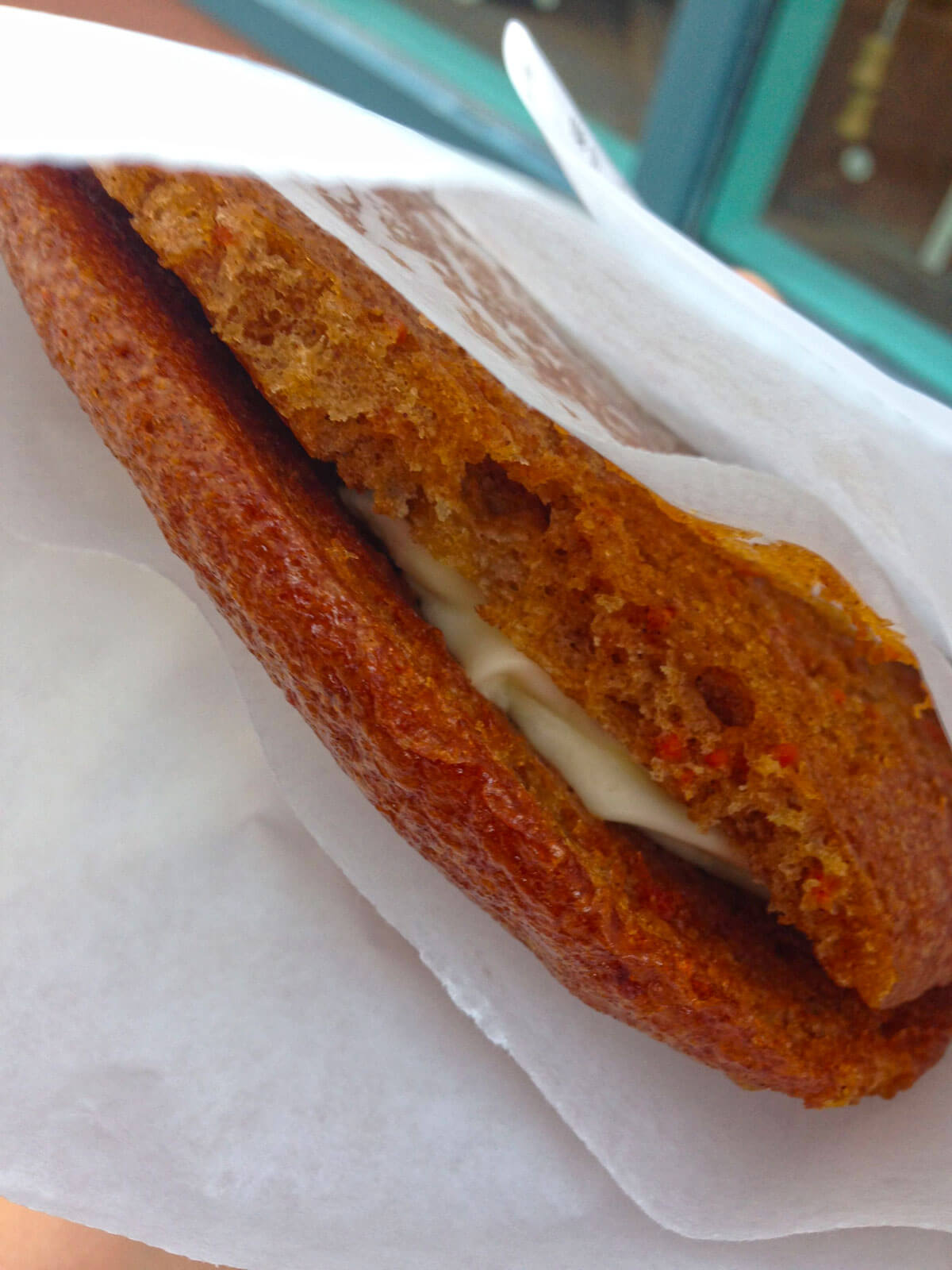 Disney knows how to do desserts, and the Carrot Cake Cookie at the Writer’s Stop at Disney’s Hollywood Studios is one of my favorite most filling snacks at Disney World. Two huge, moist, spiced carrot cake cookies filled with sweet and tangy cream cheese frosting stole my heart from the very first bite. It usually takes me three or four sittings to finish one off, and at under $4, that makes it both delicious and budget friendly!

Of course, there are dozens of other great snack options at the Disney parks, and the offerings are constantly changing and expanding. One of my favorite parts of a Disney trip is discovering new tasty treats. What are your favorite filling snacks at Disney World? Share in comments below!