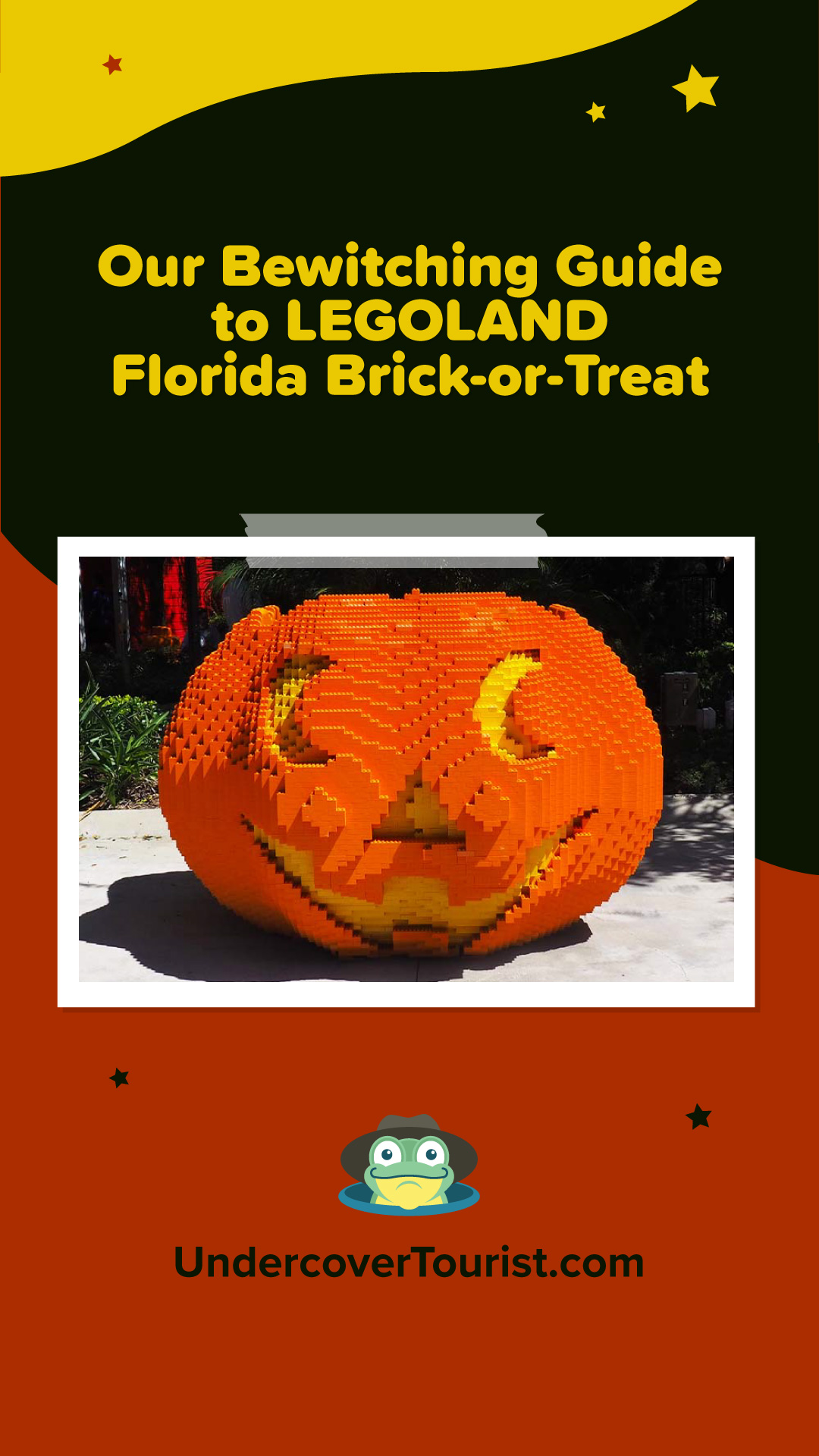 Every October, LEGOLAND Florida Resort dusts off its stockpile of jack-o-lanterns and cauldrons for its annual Brick-or-Treat event. This tadpole-friendly celebration is filled with sinfully delicious sweets, monstrous meet-and-greets, spooktacular shows and frogtastic fireworks. It's also the perfect way for the whole family to get into the Halloween spirit! We attended with our little goblins opening weekend and were hoppily surprised at how much there was to see and do. Tad and Lily had so much fun brick-or-treating throughout the park's various neighborhoods in their carefully curated costumes (and Leap and I had the shows' catchy songs in our heads all day)! This frightfully festive event — which is included with regular theme park admission and select annual passes — runs every Saturday and Sunday during the month of October and is a safe way to get in on all of the fall fun.

What to Expect at LEGOLAND Florida Brick-or-Treat 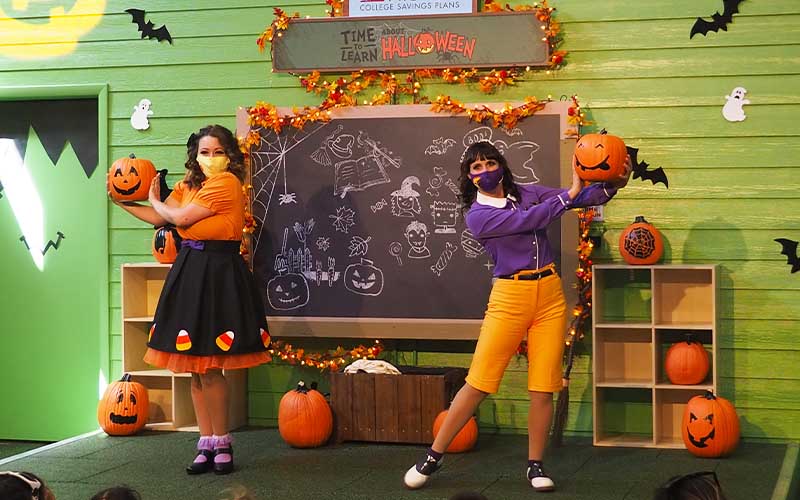 Starting at 11:30 a.m., Model Citizens and LEGO Monsters alike take the stage at various times throughout the day for spooktacular performances. Every show is just 15 minutes long and perfect for tadpoles of all ages. Join Mummy Monster and his ghoulish groupies at the LEGOLAND Fun Town Theater for the Groovin' Graveyard, a monstrous musical revue accompanied by petrifying percussionists. Test out your scariest sounds, faces and dance moves at Operation: Monster Squad at Kingdoms Stage. Help a group of Brick-or-Treaters undo an ancient spell at A Candy-Coated Curse at LEGO City Stage. Enter the Florida Prepaid Schoolhouse, where tadpoles ages 2 to 6 will love learning about the haunting holiday at Time To Learn About Halloween. 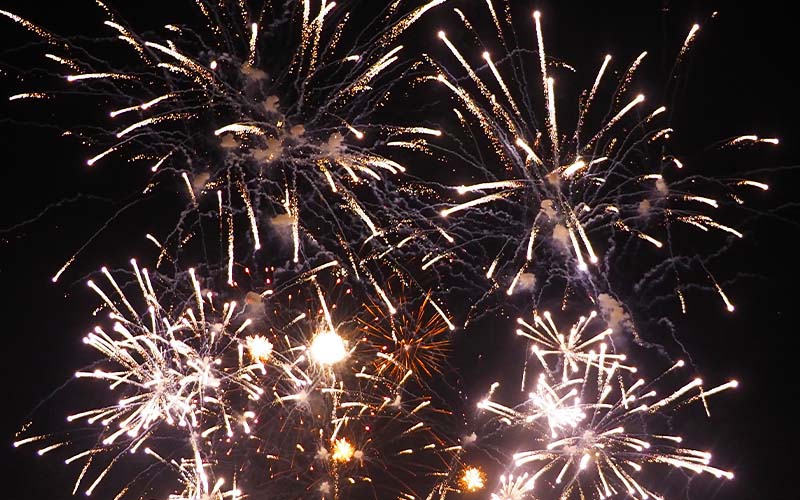 At the end of the day, settle down for the Tale of Pirate's Cove at Pirate's Cove Special Events Stadium. In this nighttime spectacle, sparks light up both the sea and the sky as Captain Dreadbeard recounts the story of his legendary victory! Special viewing glasses start being distributed at 7 p.m. and the show begins at 8 p.m. Head over early if you want a spot on the stadium benches, but seating is also open on the adjacent lawn. 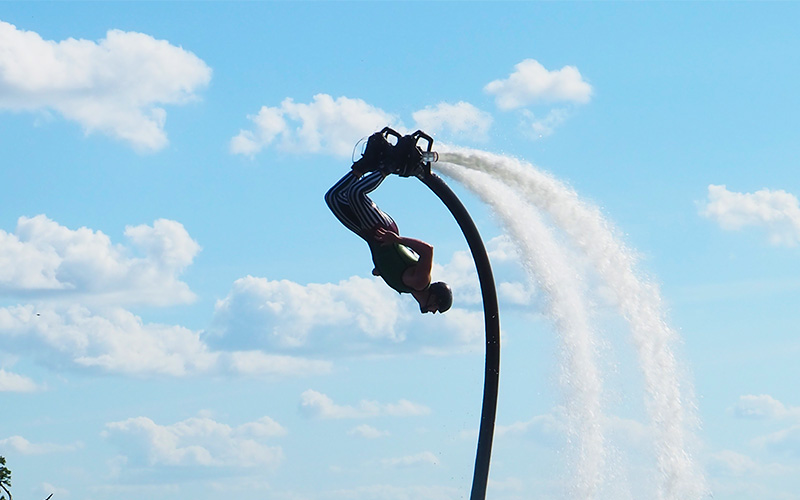 Also, don't miss LEGOLAND's brand new water show, Brickbeard's Watersports Stunt Show at Pirate's Cove. Cheer on the new recruits as they ski, jump and fly their way into Captain Brickbeard's crew. (The first five rows are a splash zone so if you park yer booty there, be prepared to get soaked!) Performances take place at 12 p.m., 2 p.m. and 4 p.m. every day. 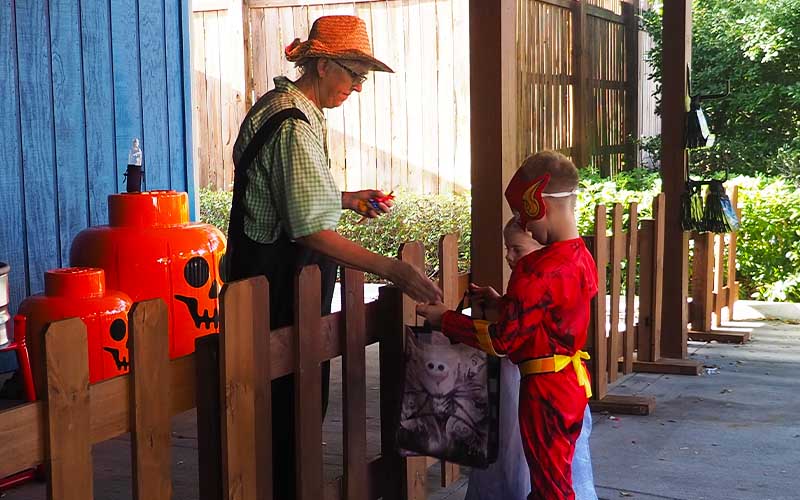 Starting at 2:30 p.m., Model Citizens begin handing out candy at five different uniquely themed trick-or-treating stations around the park. Just grab a free bag and walk up to the candy cauldron. (Oh, and don't forget to say "Brick or Treat!") Your stash will be full in no time! Stock up on sweets at:

The cast of A Candy Coated Curse and Time To Learn About Halloween even give out candy during and after their respective shows, so make sure you have a bag on you before you see them! 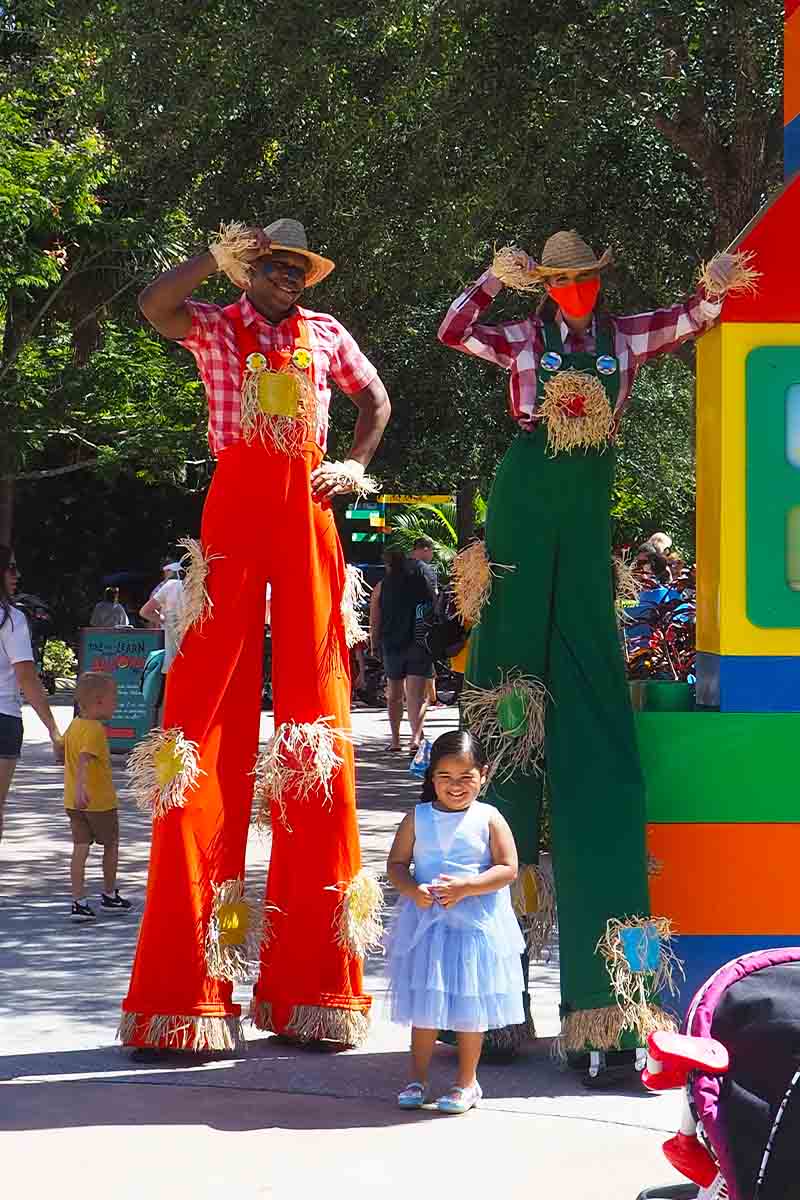 Rockin’ Frankenstein, Mummy Monster, Lord Vampyre and all their fiendish friends have awoken from their slumber and arrived at LEGOLAND to celebrate the season! At various times throughout the day for approximately 20 to 25 minutes, you can snap a spooky selfie with these supernatural celebrities.

The casts of The Groovin' Graveyard, Operation: Monster Squad and Captain Brickbeard's Watersports Stunt Show even stick around for photo opportunities after every performance! 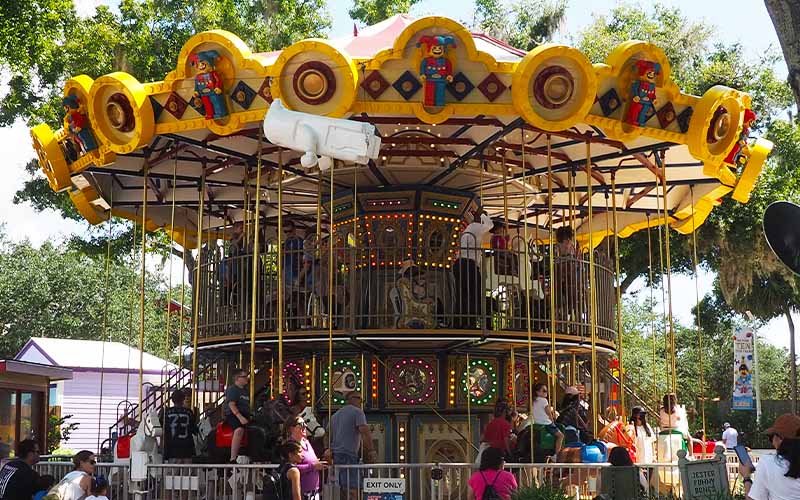 The double-decker Grand Carousel at the front of the park has gotten a monstrous makeover. Hop onboard the Creepy Carousel in the Graveyard of Ghouls to listen to some popular Brick-or-Treat tunes! Kingdoms Ring Toss Game has also gotten in the spooky spirit. Test your skills in the fun and challenging Critter Catcher's Ring Toss at Creatures of the Kingdom. Want to up the stakes a little more? Join in on the Candy Corn Scavenger Hunt to unscramble LEGO Witch's secret spell. Pick up a form in DUPLO Valley Happy Harvest and submit it for a chance to win a LEGO prize pack! 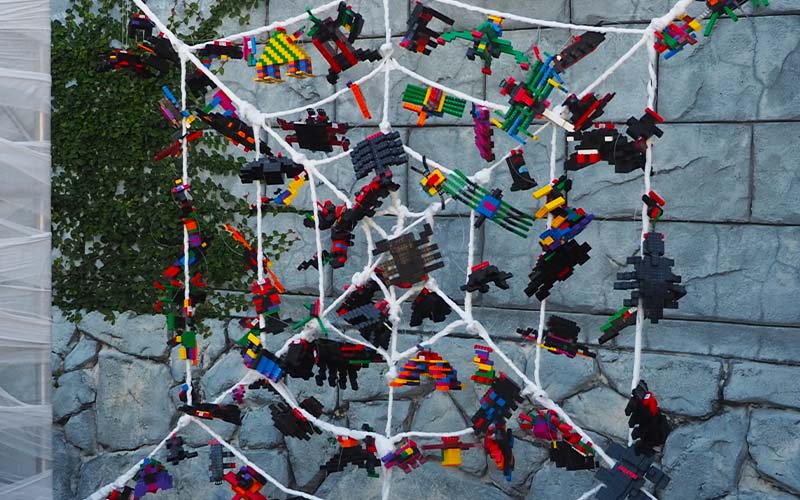 Of course, it's not a trip to LEGOLAND without actually getting to play with some LEGOs! Help scare the crows out of the pumpkin patch by building the biggest scarecrow you can at Scarecrow Superbrick Build. This build takes place in DUPLO Valley Happy Harvest from 11 a.m. to 6 p.m. Lastly, head over to Creatures of the Kingdom to add your creepy, crawly spider creation to the giant spider web for yet another chance to win a LEGO prize pack! The Spider Attack Competition Build takes place in Creatures of the Kingdom from 12 p.m. to 5 p.m. 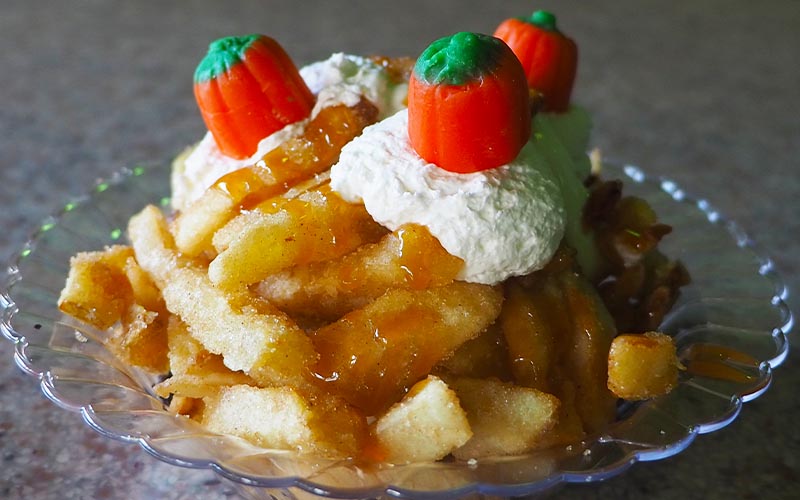 The ghoulish goodies don't just stop at the candy! Here are all of the seasonal food and beverage options you can find scattered around the park: 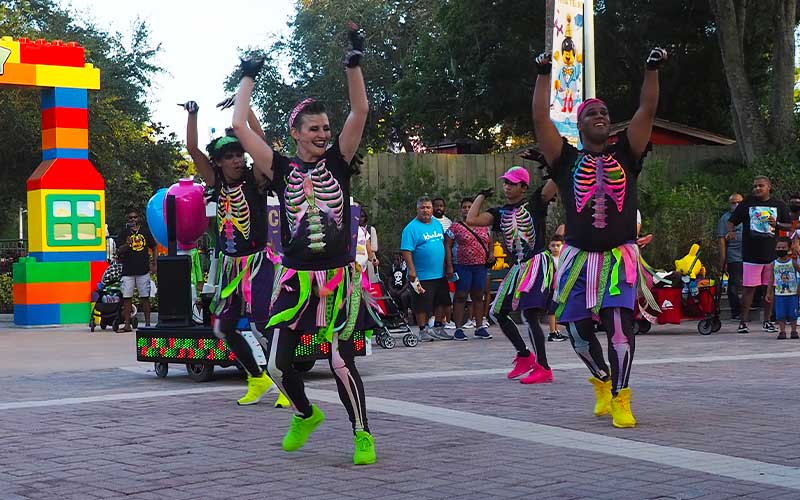 Several times a day, the Boo Crew will gather around the Creepy Carousel and host an epic dance party. Tad and Lily loved being part of the "largest Conga line ever" and dancing along to tunes, such as "Thriller" and "Spooky Scary Skeletons!" Showtimes aren't listed anywhere so you just have to be at the right place at the right time. However, the crew also appeared at the park exit after the fireworks and the DJ was still spinning beats as the moon continued to rise, so if you miss them during the day, your tadpoles will still get to bust a move before heading back to the car.

If you froget to bring a costume from home or your tadpole decides they want to get in on the spooky spirit at the last minute, LEGOLAND has tons of outfits and accessories available at various shops around the park. Check out what we found at The Big Shop below. (Whatever costume you and your tadpole choose, keep it nice and light. It still gets into the high 80s and low 90s in October in Florida and the last thing any of us want is a hot and fussy tadpole!) 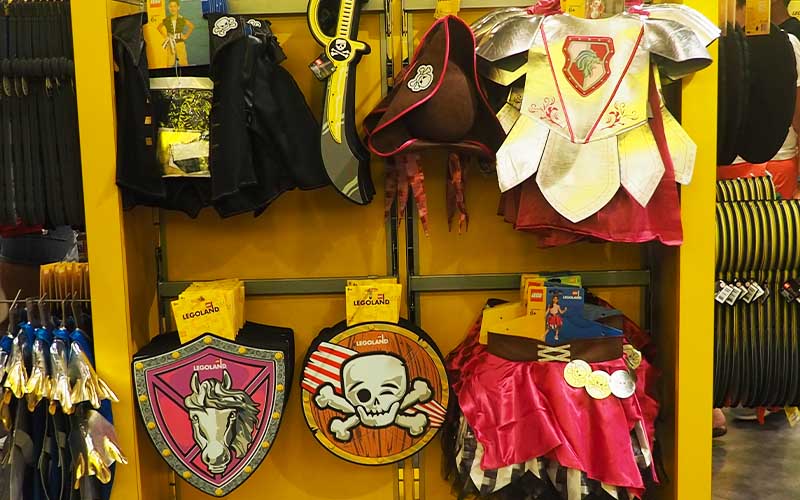 Are you looking to make LEGOLAND part of your spooky season celebrations? Save some green by purchasing tickets through through Undercover Tourist.

SAVE $20 vs Gen. Admission gate price

SAVE $37 vs Gen. Admission gate price