Using the Minnie Van Service to Get Around Disney World

Note from Mommy Frog: Exciting news, frogs — After over two years, Minnie Vans are returning to Walt Disney World! The service is confirmed to return June 29, 2022. Stay tuned for more details on this hopful transportation option.

When planning your vacation to Walt Disney World Resort, transportation shouldn’t be a huge worry because Disney offers plenty of ways to get around property. You can hop from place to place using one of the free transportation systems, either by bus, ferryboat, monorail or Disney Skyliner). For the majority of the time, that’s how we like to travel around the parks, hotels and Disney Springs. But we frogs also like to treat ourselves every once in a while, and we’re so hoppy that private Minnie Vans are an option for those times we’d rather not wait for a delayed bus or transfer monorail lines. Here's how it works and what you can expect out of this luxurious, personal ride experience. 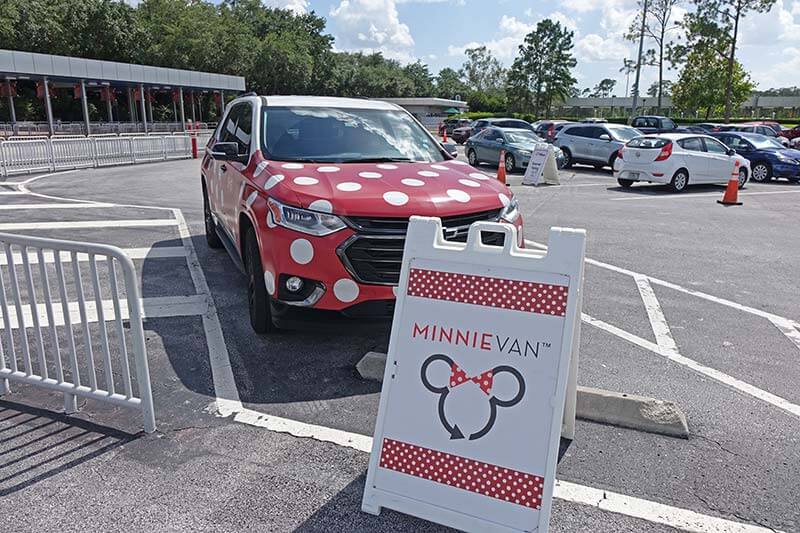 Overview of the Minnie Van Service

Disney initially introduced Minnie Vans in 2017 to provide a personal, on-demand car ride service as a way to move around Disney property. At first, they were only available at select Disney deluxe resorts, but since its expansion in summer 2019, anyone can now request a Minnie Van to go anywhere around the Disney World Resort. You can even book a ride to and from the Orlando International Airport or Port Canaveral! (But for trips off-site, you’ll need another way to get there, and there is no direct service between the airport and Port Canaveral.) 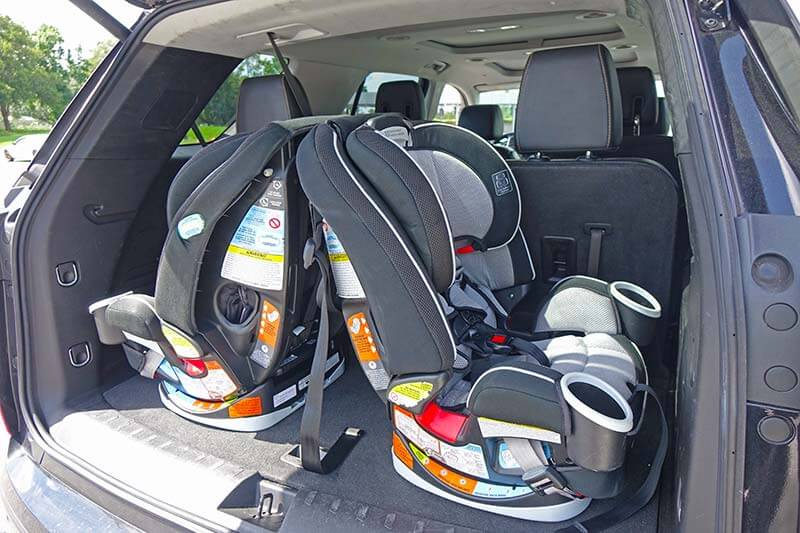 Froggy parents, a huge plus is that Minnie Vans come equipped with complimentary car seats for your tadpoles. Lily still hasn’t quite outgrown the need for one, so we love this service’s perk! Disney has partnered with Lyft for this service, but unlike regular Lyft rides or similar rideshare apps such as Uber, the Minnie Van drivers are exclusively Disney cast members. That way, it eliminates any concerns about who’s behind the wheel. You’ll be able to spot a Minnie Van easily because of its cute design — a bright red car with white polka dots! They all look the same, but each has its own number displayed on the outside window so you can tell which one is yours.

What to Expect from a Minnie Van Ride

To make pick-up and drop-off easy, Minnie Vans will generally stop near or at the bus stations. There should be signs to point you in the right direction, but you could also ask a cast member if you need extra help. For example, when we picked up our Minnie Van at Epcot, we had to go to the bus loop. We didn't have to wait very long, and could track our driver's route through the app before she stopped behind the taxis. We double checked that the identifying number was correct. 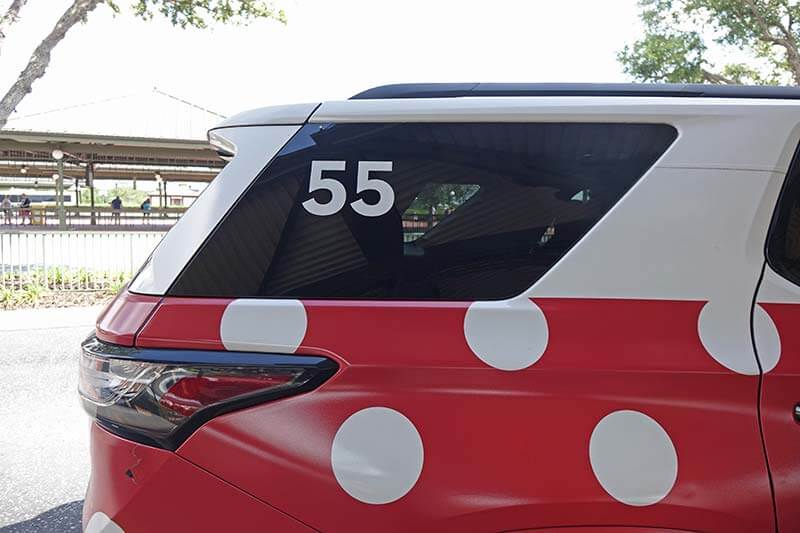 Our driver got out of the car to open the doors for us. She let Tad take the photos that he wanted while we got Lily strapped into her car seat without any problems in record time. And then, we were off! Our driver was very friendly, and we engaged in conversation for most of the ride. She mentioned that all drivers go through eight hours of car seat training and ADA training each, and they need to know how to get around Disney World property without a GPS. The AC was turned up high, which allowed us to cool off before our visit at Magic Kingdom.

Each Minnie Van is also equipped with multiple phone charging cables. This came in handy for my phone's low battery! Minnie Vans also have umbrellas (red, naturally), a special Disney-themed soundtrack related to your destination, and of course, Disney trivia courtesy of your Minnie Van driver. (Lily loved talking about her favorite princesses, and Tad asked a million questions about Galaxy's Edge as we passed the black spires of Batuu!) You can also ask for an Official Disney Transport Collector Card, which offer up even more fun facts (like how many polka dots are on each Minnie Van).

At the end of the ride, you have the option to tip your driver through the Lyft app. You could also give a cash tip, or none at all. It's up to your discretion, but it is not required or expected. 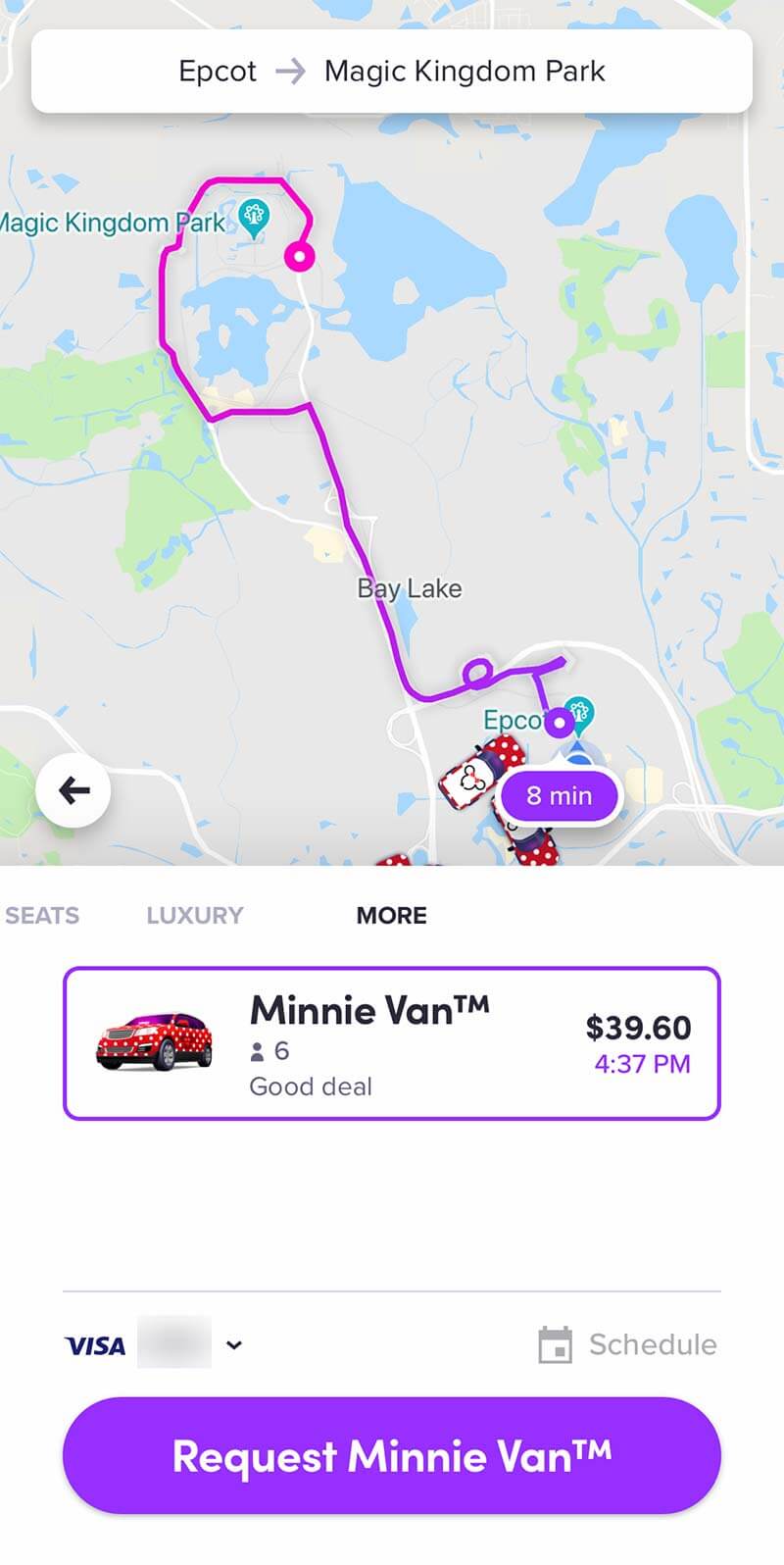 The Minnie Van service within Disney World works with the Lyft rideshare app. For our first-time use, the Minnie Van option popped up immediately. But if it doesn't show up, you may need to activate the Minnie Van option, which you can do through the My Disney Experience app when you're on property or at the front desk of your resort. When you need a ride, you simply open the app on your smartphone and select your Disney destination. Verify your pick-up location, and tap on the Select Minnie Van option (you may need to swipe through the vehicle options until it’s displayed). Once the ride has been confirmed, the app will show a map that tracks your Minnie Van en route and lets you know its identifying number.

Prices vary based on the distance between your pick-up location and your destination. You will see the total cost before you confirm the ride. Like a regular Lyft ride, you pay through the app. Minnie Vans operate from 6:30 a.m. to 12:30 a.m. daily. If you need to request an accessible vehicle, call 407-828-3500 instead to accommodate your standard wheelchair, motorized vehicle or electric conveyance vehicle (ECV).

Using the Minnie Van Service as an Airport Shuttle

Currently, you cannot book one-way and round-trip drives to the Orlando International Airport through the Lyft app. To arrange a Minnie Van shuttle ride between your Disney hotel and the airport, call 407-WDW-PLAY (or 407-939-7529) with your flight information ready. If traveling within the U.S., request a pickup at least two hours before your flight departure. For international flights, arrange a pickup at least three hours before departure. You may book your shuttle ride up to six months in advance.

Minnie Van shuttles can accommodate up to six guests, six medium-sized suitcases and up to three car seats. It costs $150 each way (gratuity not included) to take a Minnie Van shuttle to the airport. Operation hours are from 6 a.m. to 11:59 p.m. Be aware that you may need to arrange a different mode of transportation if you have an early morning flight before 8 a.m.

Keep in mind these other important details about the Minnie Van airport shuttle service:

Disney has started testing out and offering Minnie Van trips to and from Port Canaveral for your Disney cruise. Similar to the airport shuttle option, you’ll need to call ahead and arrange a Minnie Van ride by contacting Disney Cruise Line Embarkation Services at 1-800-395-9374. A one-way trip will cost $240, excluding a tip for your driver.

When You Should Use a Minnie Van 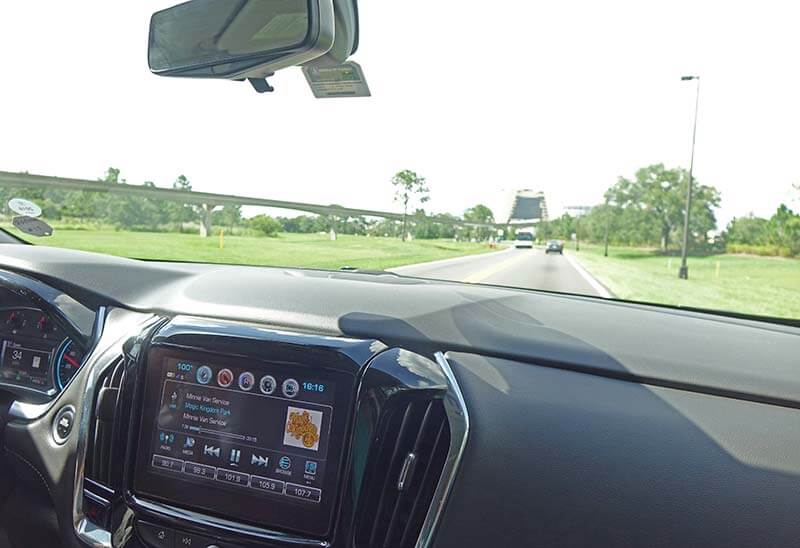 Treat the Minnie Van service as any other Disney splurge. Generally, you won’t want (or need) to use a Minnie Van for every single trip during your vacation. After all, that would quickly add up, and you can always ride the bus, ferryboat and monorail for free! But there are definitely some great benefits in certain situations when you may want to consider requesting a Minnie Van:

It doesn't matter if you're an individual or part of a group. Anyone can request a Minnie Van! Although, we'd especially recommend the service for the following guests:

We think the Minnie Van service rounds out Disney World's transportation options. Let us know in the comments if you have additional questions about riding in a Minnie Van.