'Sup? Tad here. It's time to get talking about a topic that's near and dear to me—the best selfie spots at Universal Orlando Resort. Yeah, I'm the frog family video guy, but I've been known to step in front of the camera for some face-time.

Vacations are a time for pictures. Ever since the first family visit to a theme park, cameras have been a part of it. My mom and dad like to tell me about this time before the internet (1993, maybe) when people used something called a slide projector to show off their family vacation photos. They would—get this—invite frog friends over to see their pictures on a screen ... and they'd give narration. Like, "Here's another picture of World of Motion." Mind. Blown.

These days we let people in on our vacations while we're on vacation. And really, when it's a theme park vacation, it's worth it to take pics that rack up the likes. While some people scoff at the selfie, it's a quick and spontaneous way to share the fun. On a recent trip to Universal Studios Florida and Universal's Islands of Adventure, I got our frog family into the act to provide some pointers on taking these pics. Use these seven selfie spots at Universal Orlando as a starting point for your own family vacation photos. One last thing—friends don't let friends use filters on photos. 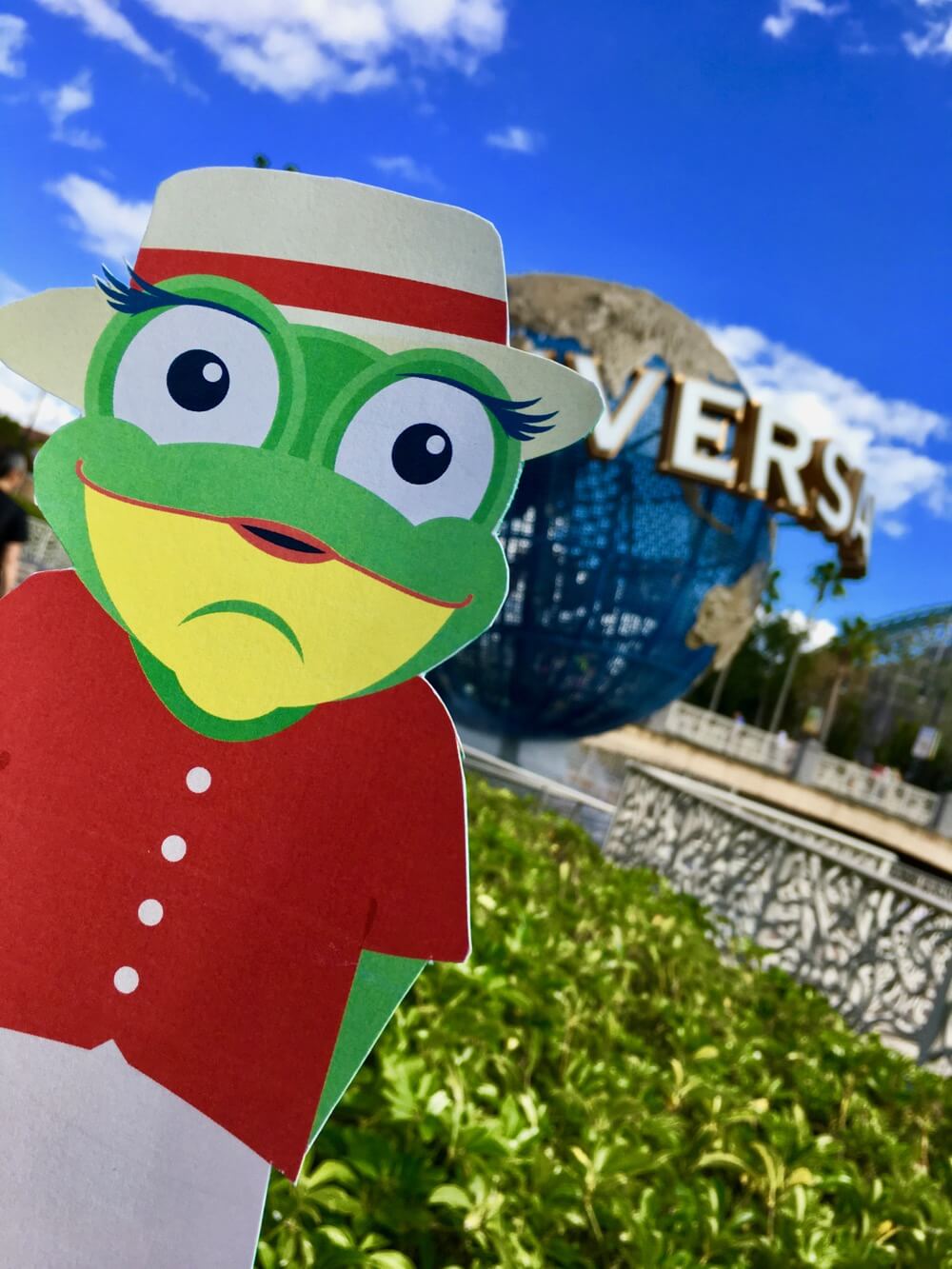 Mom was kind enough to star in the first stop on our photo tour. One of the best selfie spots at Universal Orlando is right at the entrance to Universal Studios. Hum along to that Universal Pictures fanfare tune "Dun Dun Dun..... DUN DUN" and let people know where you're spending your vacation. Leave enough room for the globe to make an appearance. It's not about you, even though it kinda is. 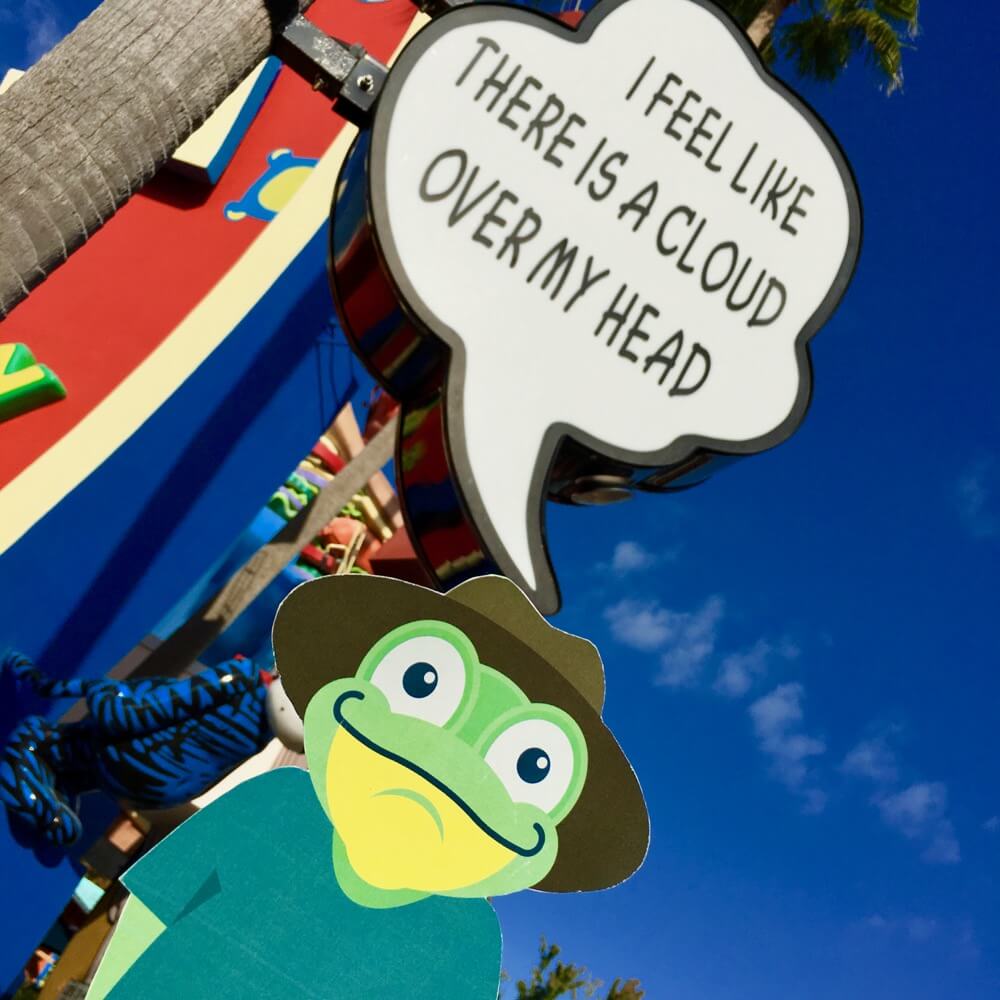 Toon Lagoon is all set when it comes to photo ops. This is an island full of classic characters that appeared in comics—folks like Blondie, Beatle Bailey and Popeye. Floating all around the island are word clouds and thought bubbles. If you frame yourself in just the right spot, you can appear to be "saying" something clever. Dad hopped in on a reference within a reference. #meta 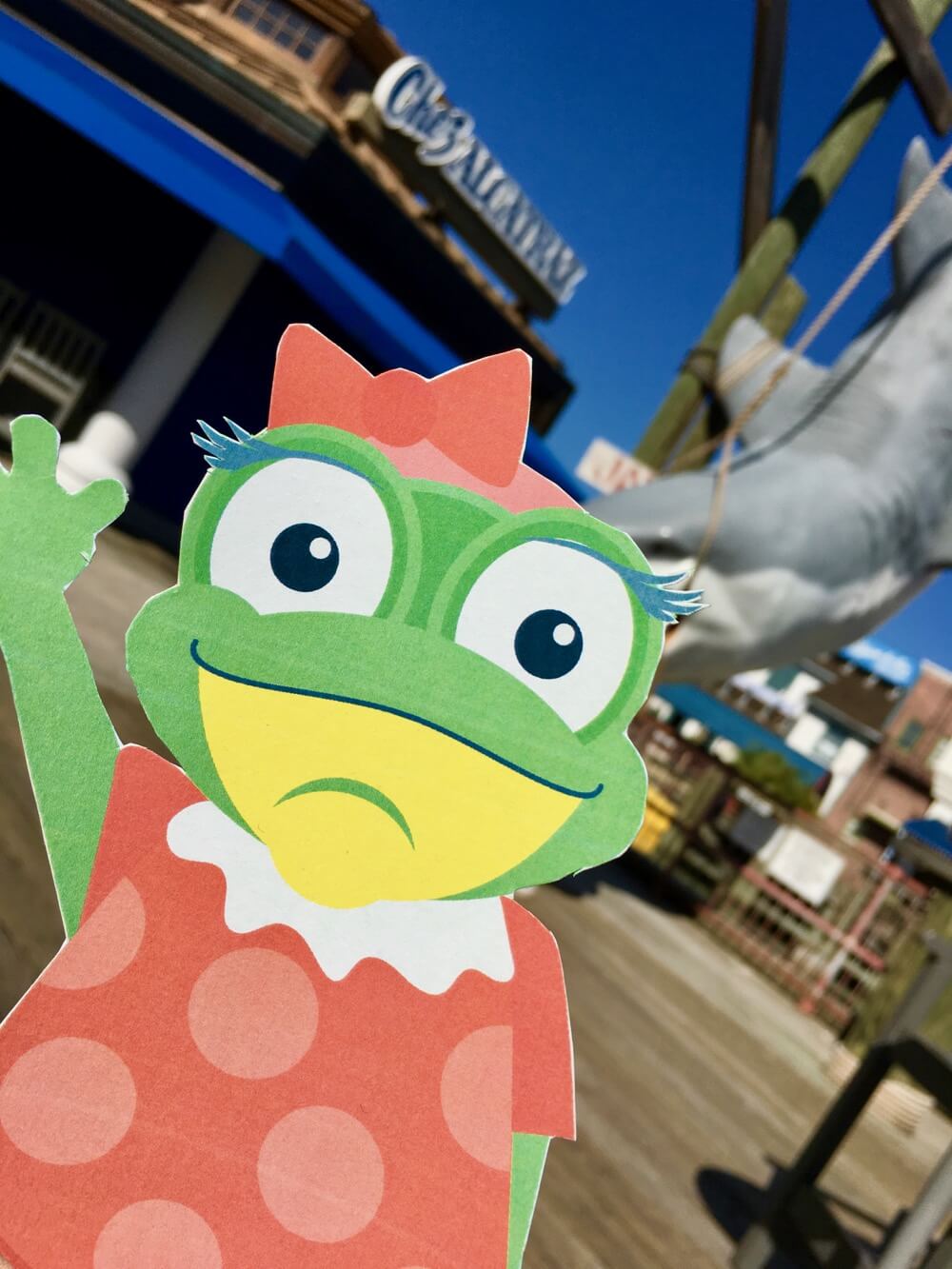 You're gonna need a bigger boat. The folks have not let me watch "Jaws," but I know the familiar lines and eerie song. This classic movie even had its own ride at Universal Studios Florida. All that remains of that experience is the hanging shark display in the San Francisco area. The photo-friendly spot not only makes for a great selfie but a neat insider homage to a former attraction. 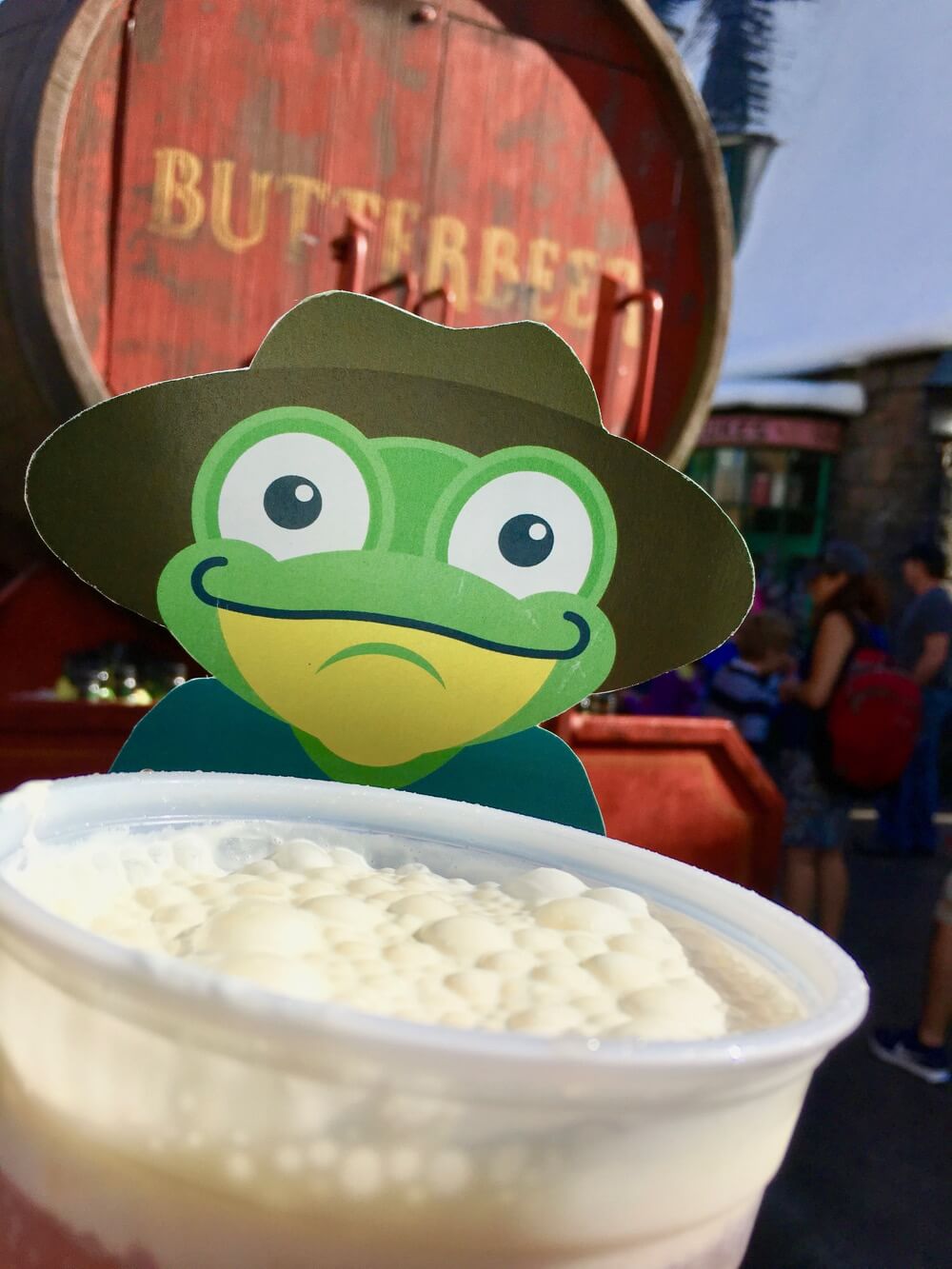 Butterbeer—the one selfie that sums up your experience and incites envy from your social media followers. This must-have beverage is often the first thing fans seek upon entering the Wizarding World of Harry Potter. The delicious butterscotch taste and creamy froth from this cold (or hot, or frozen) treat truly rounds out your experience. While any spot with your Butterbeer is great, I prefer mine in front of the Butterbeer cart in Hogsmeade. Stand just so the "Butterbeer" text is readable, hold up your cup, sip and snap. And sip some more.

5. Back To The Future DeLorean - Universal Studios Florida 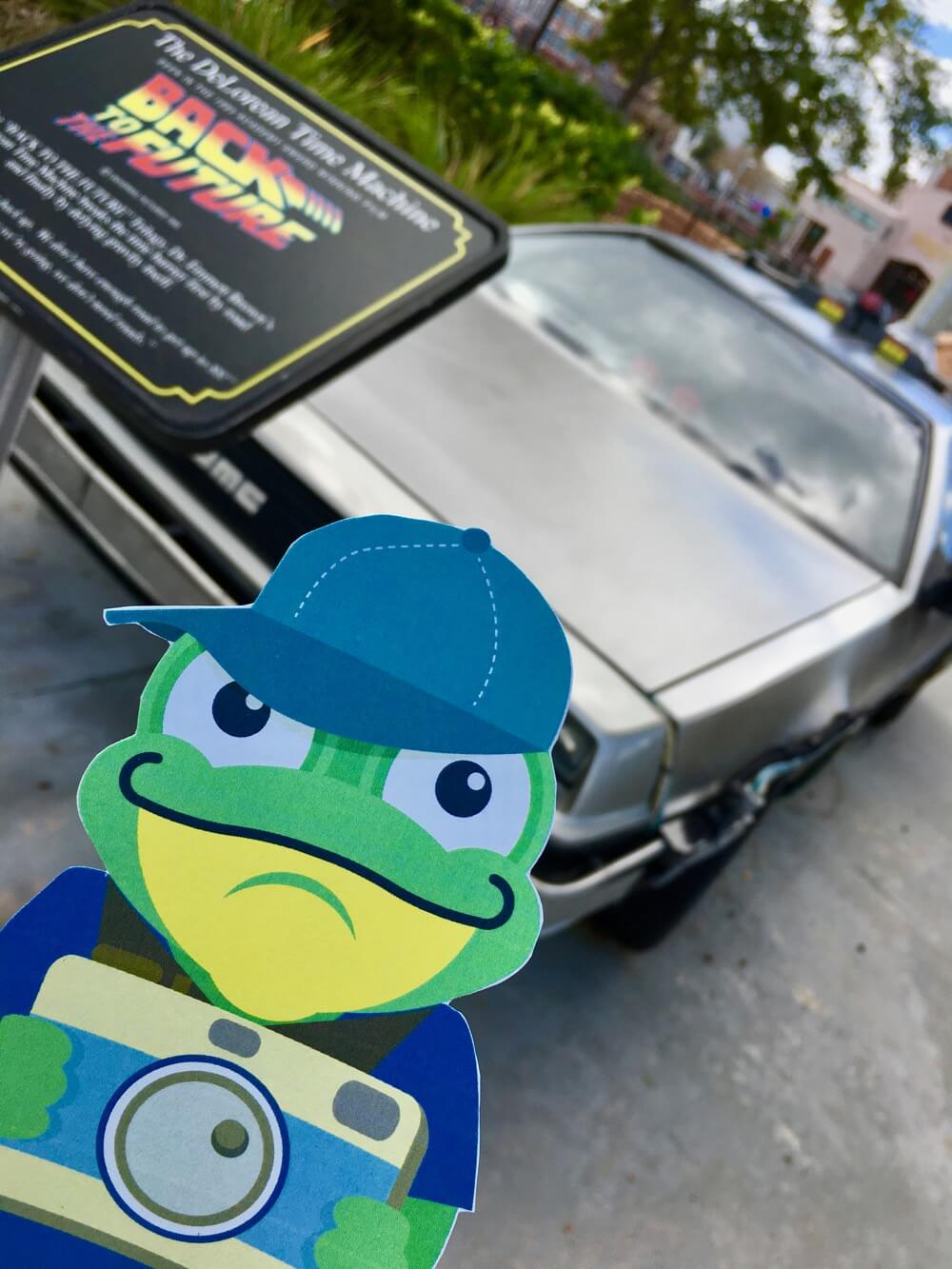 Rare is the day you get the chance to see stuff used in movies. Universal Studios Florida isn't a real film studio, and they have sprinkled in props and other items used in some of their features. There's no longer a Back To The Future: The Ride here, but they have left over the film's iconic DeLoreans. If you're as big a fan of this film as I am, you won't want to miss this chance. This Delorean, as well as the train from "Back to the Future III" are located just outside of Springfield USA. Great Scott! 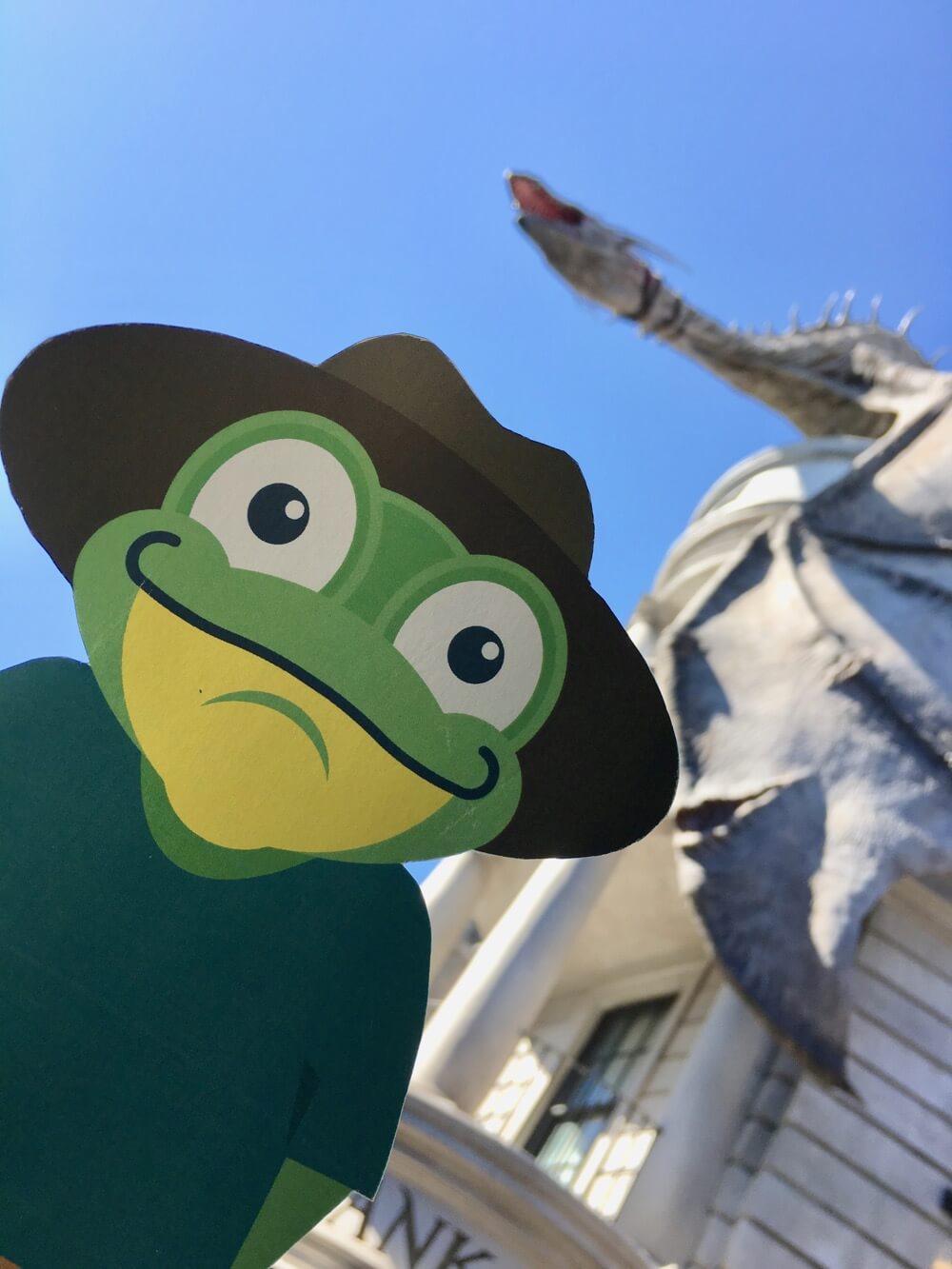 If Hogwarts is the most photographed place at Universal Orlando, the dragon that sits perched on Gringotts bank is close behind. The Ukranian Ironbelly looms over Diagon Alley, scaring unknowing visitors when he—and this is the best—breathes fire. There are lots of angles to take a selfie with him. For this one, I waited just near the attraction's entrance and pointed up. Dad wanted the fire, but it was not to be. 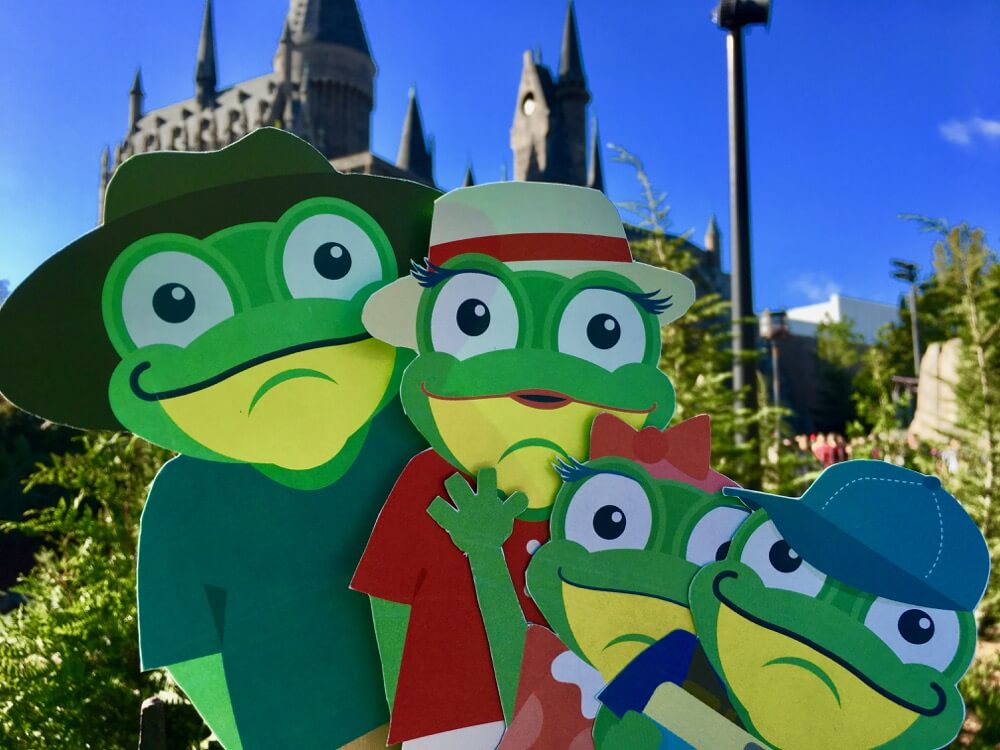 Pictures in front of theme park castles isn't a revolution. Yet ever since Harry Potter found his way into Universal parks, muggles and wizards alike have flocked to get a photo of this enchanted castle. This photo screams "look where we are." It was a task to get all of the frog family in this one, but well worth it. TIP—standing by the stage in Hogsmeade will give you a good range of distance to get the majority of the castle.

Did we miss any sweet selfie spots at Universal Orlando? Where are your favorite places to snap pics of your Universal vacation? Let us know in the comments below. How can you not resist the chance to comment? It's the internet!

Related - Why Stay At A Universal Orlando Resort Hotel