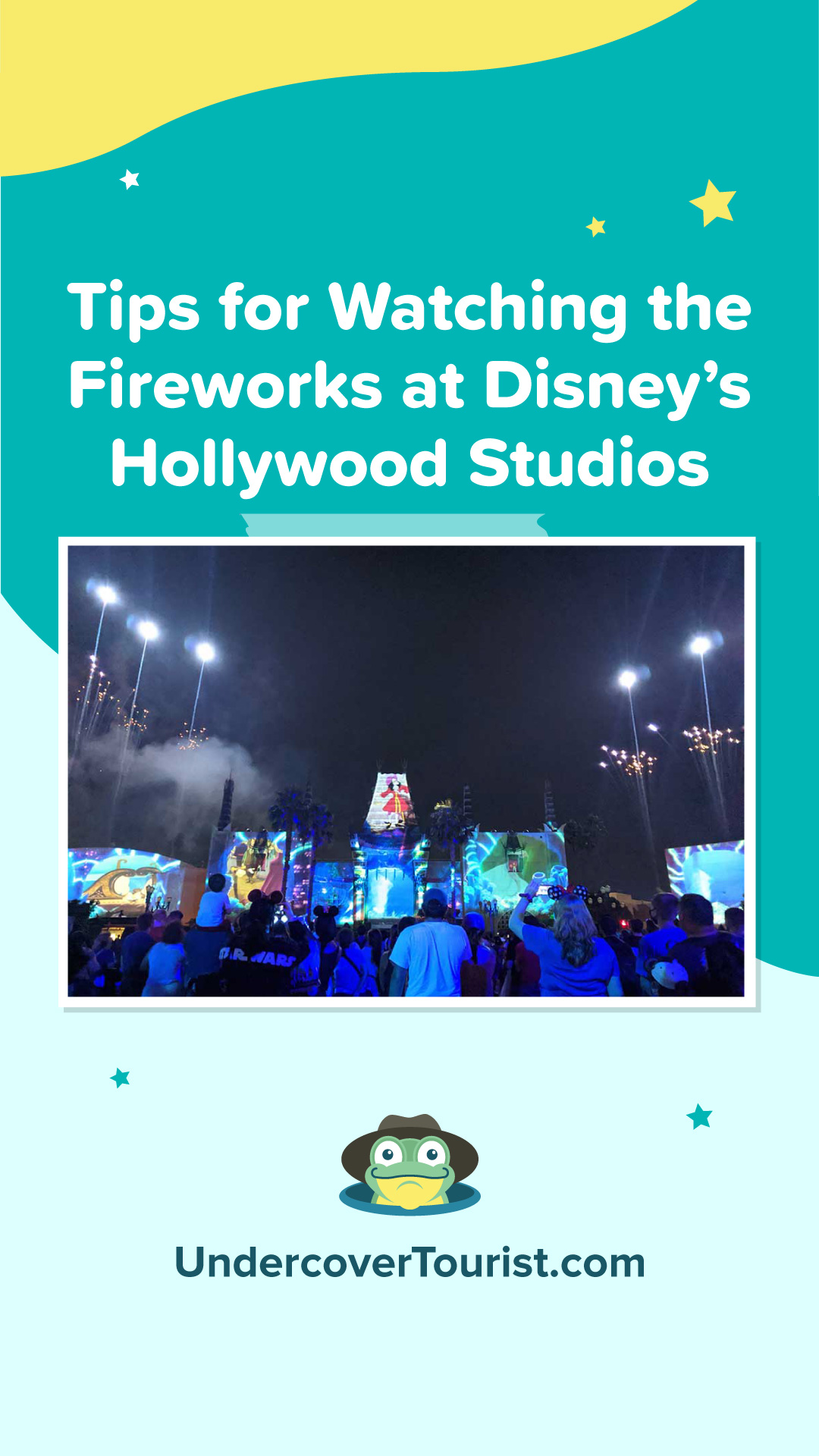 Exciting news frogs! Disney's Hollywood Studios is currently offering not just one but two nightly projection shows. Recently returned is "Disney Movie Magic". Celebrate live action films in an epic way with projections on the Chinese Theater, with films like "Indiana Jones" and "Pirates of the Caribbean". The 12-minute show also returned with new scenes from the live action "Mulan".

"Wonderful World of Animation" is a whimsical 12-minute projection show that highlights more than 90 years of Disney animation. Shown nightly at the Chinese Theatre, enjoy a look at new, classic and rare animated films. We were hoppily surprised to see Disney's newest films had been added in when the show returned this year. We love seeing some of our favorite films appear on the larger-than-life screens, with almost a 180-degree view!

"Wonderful World of Animation" debuted in 2019 for the park's 30th anniversary and was held before Star Wars: A Galactic Spectacular. Although the Star Wars-themed fireworks and frog-favorite show Fantasmic still have not returned, we are glad that Hollywood Studios has something to finish off an action-packed day. "Disney Movie Magic" originally closed in 2019 to make way for "Wonderful World of Animation," but we were hoppy to see it make a return.

No matter what show you are watching, read our guide for tips and tricks for viewing Hollywood Studios fireworks! 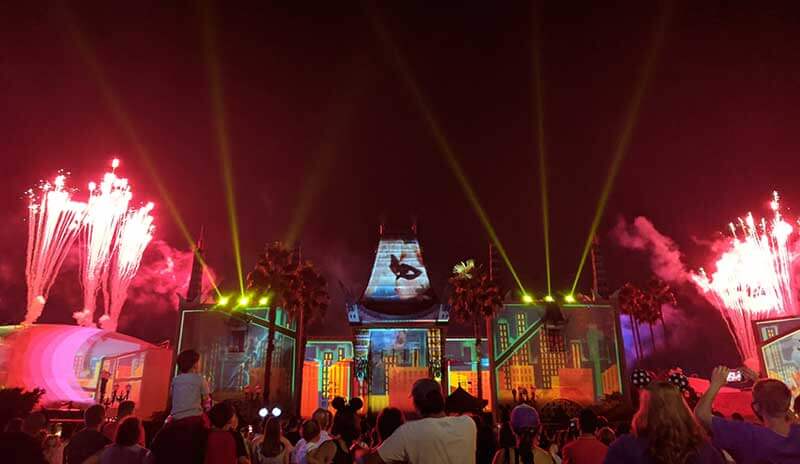 Scope out your viewing spot. Due to both shows being primarily projections, the only place to truly view it is in front of the Chinese Theatre or down Hollywood Boulevard. It is a smart idea to know where you intend to watch the shows. That way, you don’t waste time fighting through the crowd for the perfect viewing spot. We got our spot in the middle of the Center Stage area about an hour before, but there was still plenty of spots with 30 minutes to go.

Disney Movie Magic is typically run first and will kick off 20 minutes before Wonderful World of Animation. Both shows are 12 minutes long, so most families just stay and watch both. There is about five minutes in between the shows if you decide to head out early and beat the crowds. Disney Movie Magic celebrates live-action films and Wonderful World of Animation focuses on animated films, so there's a little bit for everyone!

Mind changes in traffic flow. Due to the projections on the Chinese Theatre, the queue for Mickey & Minnie's Runaway Railway could be slightly altered. They turn the marquee off for the ride about five minutes before the show, but guests can still enter the queue up until park close. This traffic flow on Commissary Lane may also be slightly altered prior to and during the show. Cast members usually direct guests away from the exit and courtyard of the Chinese Theatre. Because of the projections, the Hollywood Boulevard and Center Stage areas become congested very quickly. To get a viewing spot in these areas, plan to arrive early!

Look out for tape lines and roped off areas. Before the fireworks begin, cast members will rope off areas and tape walkways to allow guests to safely navigate through the park and viewing areas during Disney's Hollywood Studios fireworks. Take note of taped lines that designate walkways from viewing areas. Guests are not permitted to watch the show from the walkways. We like to use these taped walkways to our advantage by choosing a spot close to the front of a section, so less people are directly in front of us. 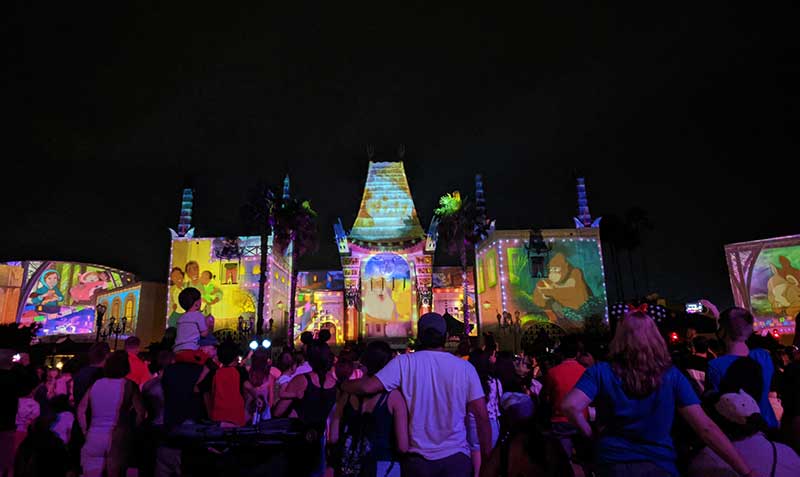 Try a Dessert Party Package for reserved viewing (when available). With the popularity of Star Wars: A Galactic Spectacular, it was somewhat difficult to secure a great view without waiting for quite some time. To avoid the hassle of claiming a spot early, try the Dessert Party Package. As part of this package, guests can enjoy different Star Wars–inspired sweets indoors at Star Wars Launch Bay. Following the treats, partygoers head over to their reserved viewing area near Center Stage. If the show returns, we hope dessert parties do as well.

Make a quick exit. We really like how easy it is to exit Hollywood Studios after a nighttime spectacular verses Magic Kingdom or EPCOT. We can just turn around and head straight down Hollywood Boulevard and then either walk to the car, bus or Skyliner. Plus, with "Wonderful World of Animation" being a shorter show, you can get those tired tadpoles to bed faster (who am I kidding, me too.) 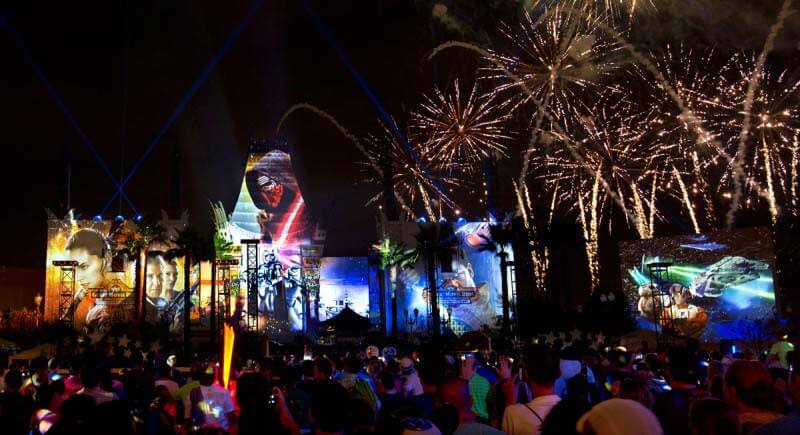 Although currently unavailable, we have to mention the epic Star Wars fireworks show! Star Wars: A Galactic Spectacular uses projections, pyrotechnics, laser effects and of course, the unmistakable Star Wars themes to transport guests to a galaxy far, far away. The extravaganza journeys through the entire Star Wars saga as favorite characters and moments surround the audience, along with a 180-degree fireworks display. From the twin suns of Tattooine to the swamps of Dagobah, the Death Star to Starkiller Base, this is certainly a must-see show for Star Wars fans, and we hope it will return some day.

At Magic Kingdom, catch the new fireworks spectacular, Disney Enchantment. This show has incredible castle projections combined with fireworks and laser effects, and for the first time, projections all the way down Main Street! Over at EPCOT, enjoy Harmonius, billed as the largest nighttime spectacular ever created as a Disney park. With floating set pieces, projections, fountains, fireworks and an incredible soundtrack, you'll definitely want to grab a great spot around the World Showcase Lagoon!

We hope these tips for fireworks at Disney's Hollywood Studios help you make the most of your visit. What is your favorite nighttime spectacular?