How to Survive The Walking Dead at Universal Studios Hollywood

A note from Leap: If you are reading this, you must have survived The Walking Dead! Sadly, The Walking Dead attraction was given its last rites on March 3, 2020. The attraction was officially closed on March 4, 2020, at Universal Studios Hollywood. But don't rest so soundly yet! We've heard whispers from the grave that the attraction may be resurrected for Halloween Horror Nights. Stay updated with our Halloween Horror Nights Survival Guide.

This walk-through exhibit is based on the popular AMC show and was reborn from the highly popular Halloween Horror Nights maze. It is not for the light-hearted or young. Here is what uninfected citizens need to know to survive The Walking Dead at Universal Studios Hollywood.

How to Survive The Walking Dead at Universal Studios Hollywood 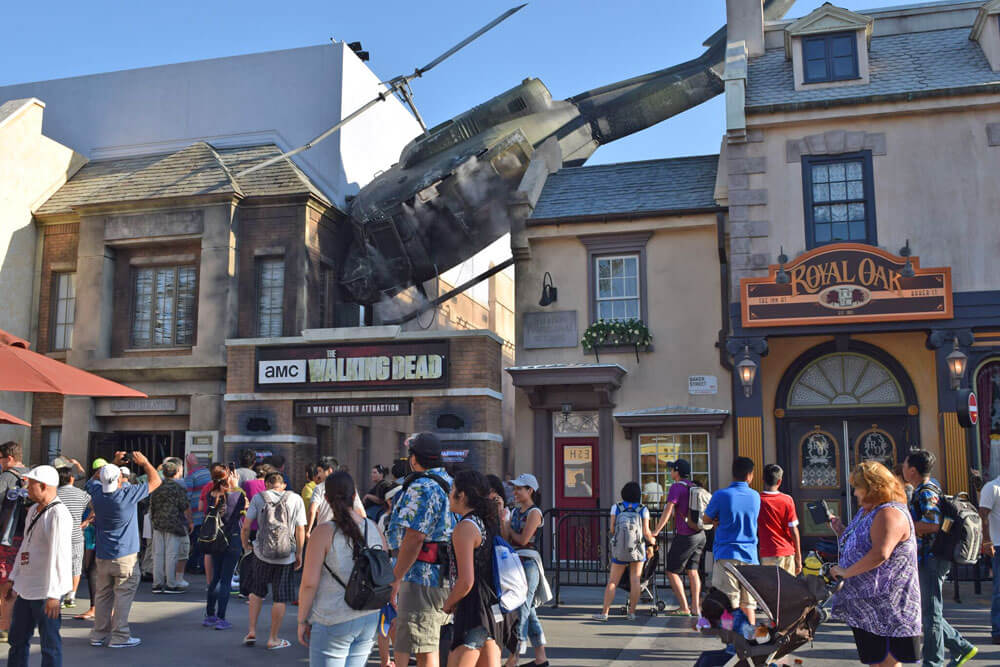 First of all, you’ll need a plan of attack. The lines for this new attraction can vary throughout the day. This attraction operates for shorter hours than the rest of the park. It opens about 30-45 minutes after park opening and sometimes closes earlier. The operating times are posted in front of the attraction. Be sure to hop by to see the closing times so you don’t miss out by saving it for last. You might bypass this Upper Lot attraction in the morning and hit it later in the day. The wait can drop to 5 minutes in the evening.

Another way to avoid the wait is to get a discount Universal Express ticket, which is one of the best ways to maximize your time and experience all of Universal Studios Hollywood's thrilling attractions, including Harry Potter and the Forbidden Journey, Transformers: The Ride 3D, the Studio Tour and, of course, the Walking Dead.

Second of all, you’ll need to decide if you can handle the gore and live action, with bloody dead people jumping out at you. More importantly, make a good decision about whether your tadpoles can handle it. Universal (and the Frog Fam) recommend that only guests 13 or older experience this attraction. Did we see younger kids going through? Yes. But we also saw parents rushing crying children to the exits after their first scary surprise encounter. We also saw fully-grown frogs jump almost out of their skin and try to escape. If blood and guts or startling surprise attacks make you greener than usual, you may want to pass on this one.

If you are a fan of the television show and your froglets are old enough to enjoy the show, then you all can probably handle it. If you wouldn’t let your froglets watch the show or they are easily frightened, then you need to have one parent watch them while the rest of the family dares to enter the apocalyptic hospital at their own risk. The Walking Dead attraction does not currently offer Child Switch, though there are fountains, characters, snacks and Super Silly Fun Land nearby.

The mostly indoor line is immersive, and has great props and photo-ops (although no photography or flash are allowed in the actual maze). Our ‘tween, Tad, was able to shoot some video for our YouTube channel. Some curious older kids could probably get a taste of the attraction by waiting in line and then exiting out the side before the really scary stuff begins. That seemed to be a popular choice for many families (among the few fleeing for their lives back out of the maze).

How Does The Walking Dead Compare with Halloween Horror Nights? 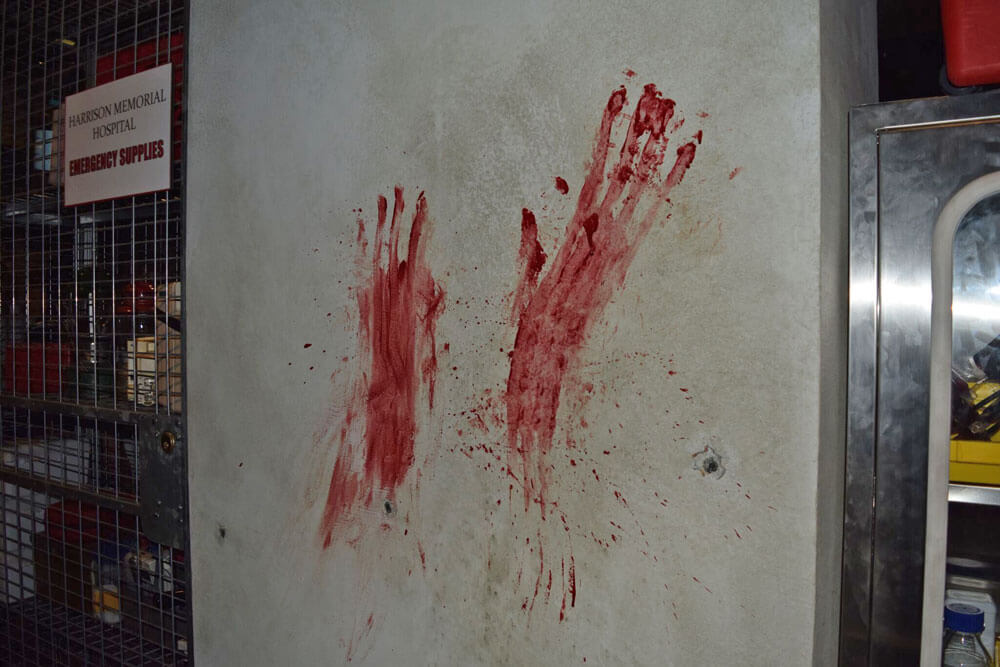 The Walking Dead at Universal Studios Hollywood is definitely less gory and intense than a Halloween Horror Night maze, but it is also more immersive. The props and details in the line make you feel like you really have entered a destroyed hospital filled with the dead. Patient charts and paperwork are scattered everywhere, bloody handprints and blood splatters appear throughout the halls and hospital supplies are strewn about. Even the ceiling tiles and floor are part of the scene. The makeup and costumes are movie-quality, as we always expect with Halloween Horror Nights mazes, but the sets are a little more detailed and permanent. 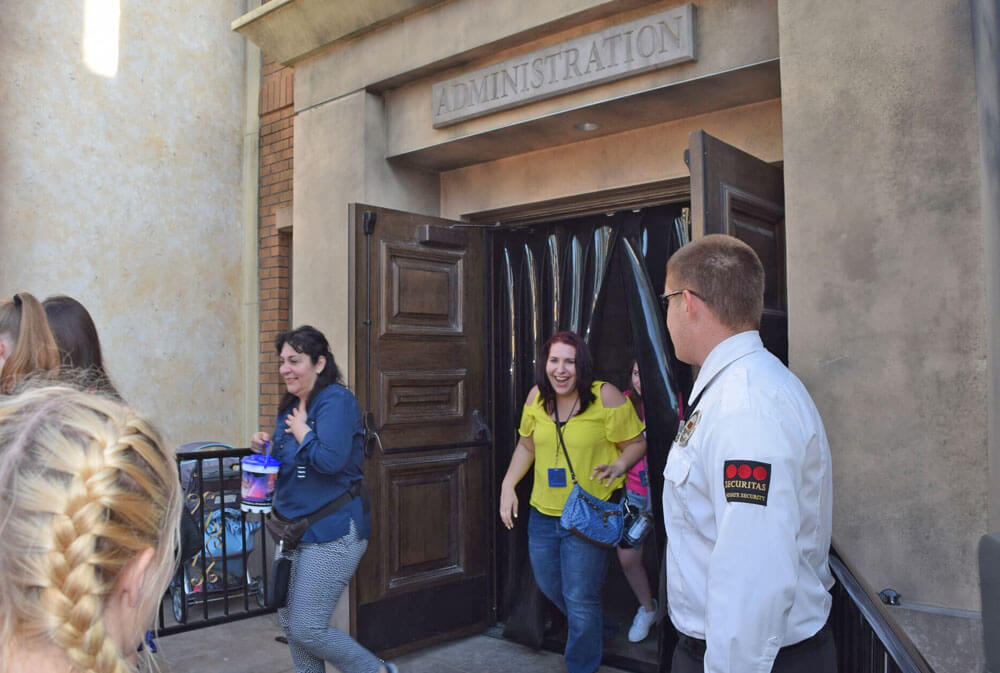 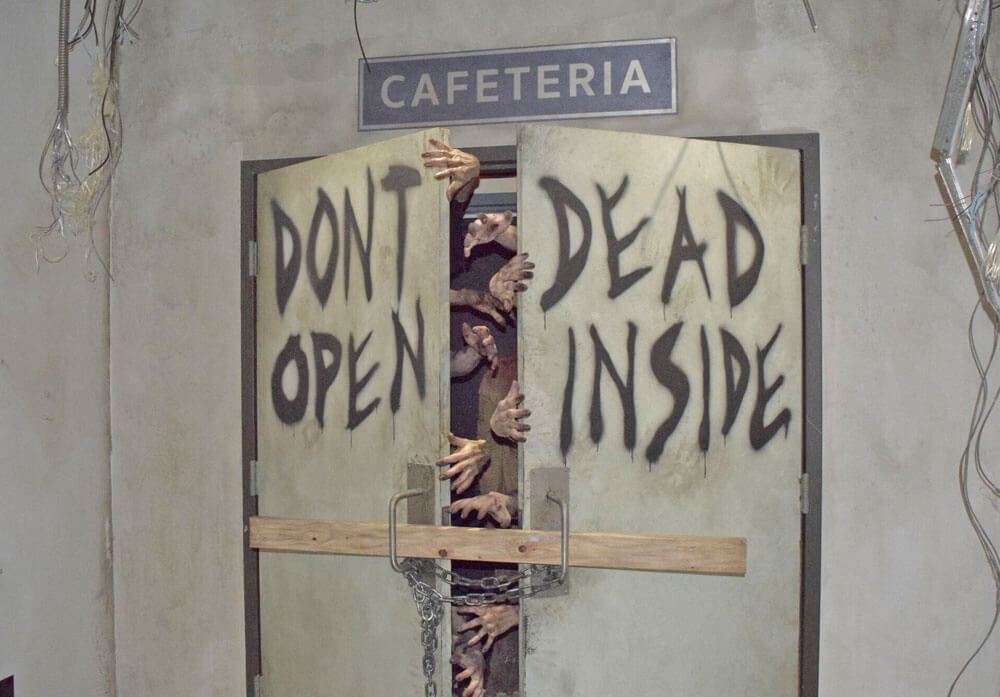 If you have been unsure whether you or your family members are ready to experience Halloween Horror Nights, The Walking Dead attraction is a good way to gauge your readiness. If it leaves you wanting more, you are ready for Horror Nights. If it is a bit too much for you, then you will really struggle at the much more intense event. If you decide to return for Halloween Horror Nights, you’ll need our Horror Nights Survival Guide. We constantly update the guide as all of the dates, mazes and gory details are announced for this season so you know what to expect. We can’t wait! 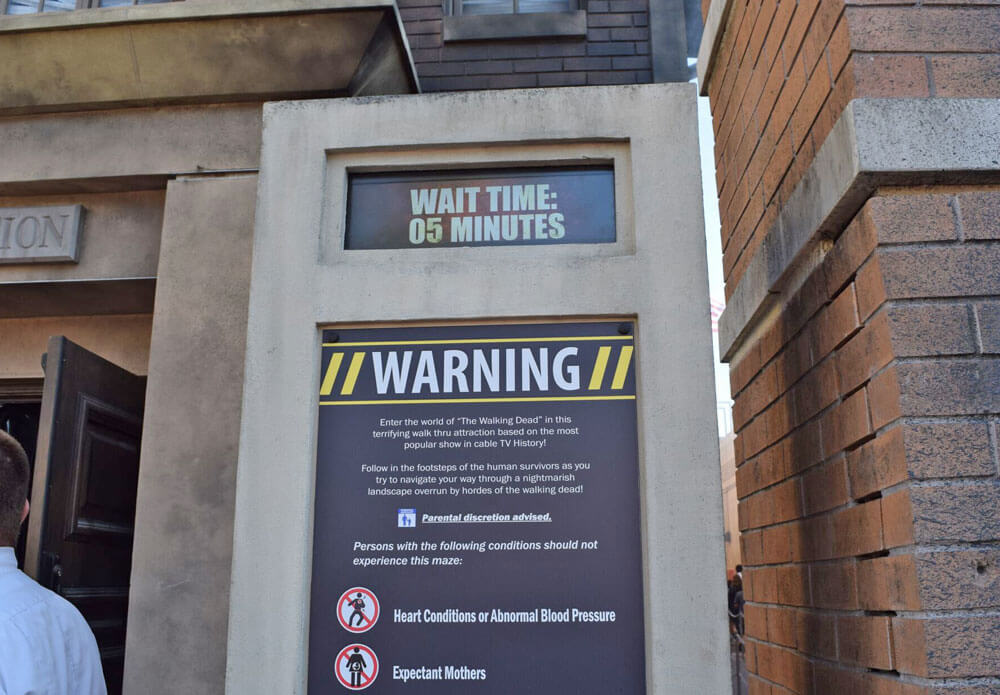 Will you visit The Walking Dead attraction at Universal Studios Hollywood? You can ask us any questions about the new walk-through or any other park attraction in comments below!