As a Florida surfer, we suffer a lot of pangs, especially in the summer months. People often ask me, “Are there waves in Florida?” and I laugh and tell them about the time I took notes for an entire year about the swells I rode denoting the swell size, wind direction and many other factors. That year I surfed 175 days -- so, yes, Florida does get some waves -- although not all of those days were pumping, head high bombs, some were knee high dribble. And it can be a long time between swells. As a Florida surfer, you learn to get your chores done when it is flat, so when the waves come you drop everything and go surf because you don’t know when the next swell will come. Fortunately, there is hope! 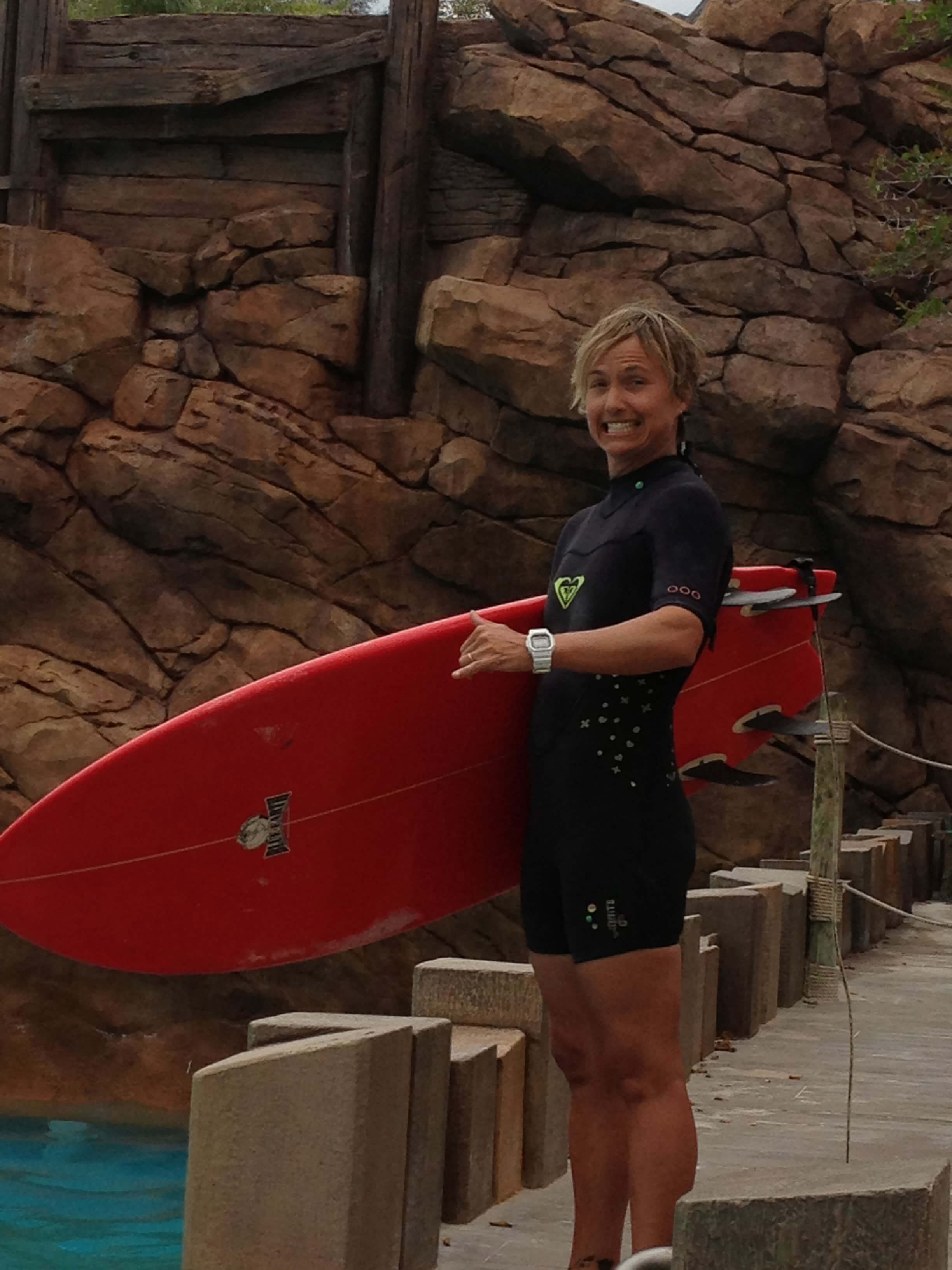 For years I had been hearing about the surf pool at Disney’s Typhoon Lagoon Water Park water park and how you could rent it out after hours and get waves. Disney’s Typhoon Lagoon Water Park by day is a wave pool for thousands of kids and adults flopping around in the mini waves. By night it transforms into something magical. For me, there was this lore about getting to surf there. It was a few years after I had heard about surfing it that I got a call from a friend saying they had a spot if I wanted it. Without hesitation I said “Yes!” I was over the moon. For my job, running a surfing nonprofit (Share The Stoke Foundation), I get to surf a lot of breaks all over the world, but I think I was more excited about getting to surf a man-made wave at Disney World.

I learned that you can rent the pool out at 5:30 in the morning before the park opens or after the park closes, and that time is based on the time of year. The base rate varies between $1,125.00 and $1,425.00 depending on which slot you pick. If you grab 10 people, then do the math, it is totally affordable. In those summertime months when it has been flat for weeks, Disney’s Typhoon Lagoon Water Park is the answer. At last, you can predict it! 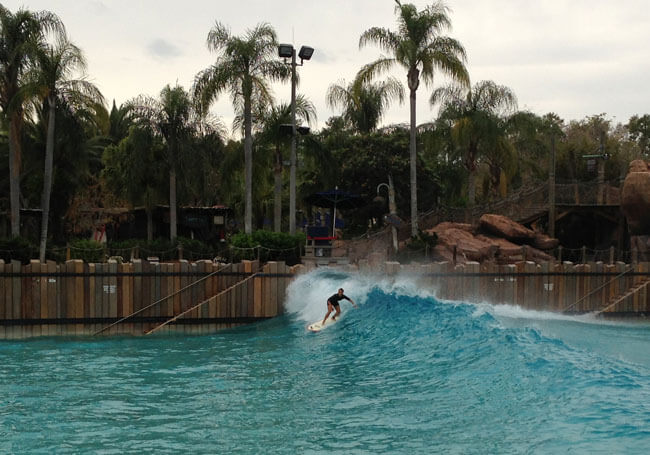 We drove over from Lake Worth, which is about a two-and-a-half hour drive.  The whole way I was like a kid in a candy store.  I was thinking what will the wave be like?  Will the water be cold?  Will I be able to do turns on this wave?  Will I float less because the water is not salt?  Finally, I got to the park and met all the bros who we would be sharing the park with. It was a bunch of doctors from New York and a film crew that does our work for our nonprofit.  We all signed in and filled out the waivers, listened to the rules and finally made our way into the empty park. As I was walking through, my eyes had filled up with some happy tears.  I know, kinda silly but this had been a dream for a long time and it was happening. I was stoked! 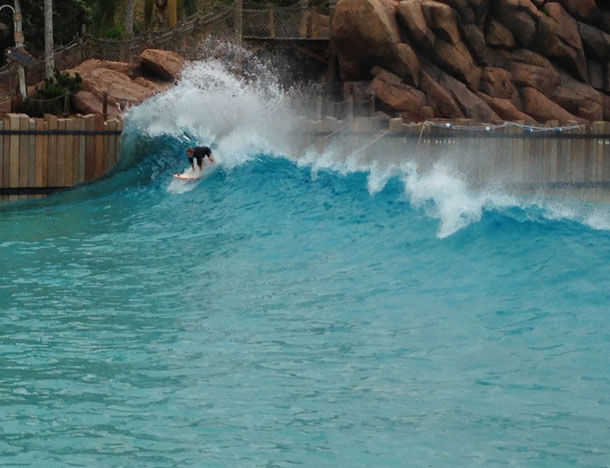 We were told we would have 100 waves and that we could choose how we wanted them.  We could have rights, lefts and split peaks. We chose 25 rights, 25 lefts and 50 split peaks.  Next time I will choose a different combination.  More on that later. The folks there asked us if we had any music we wanted to play. Of course as surfers we had the standard Jack Johnson, Donavon and Bob Marley combo going on the speakers. It was really cool having our own playlist rocking while we were there. 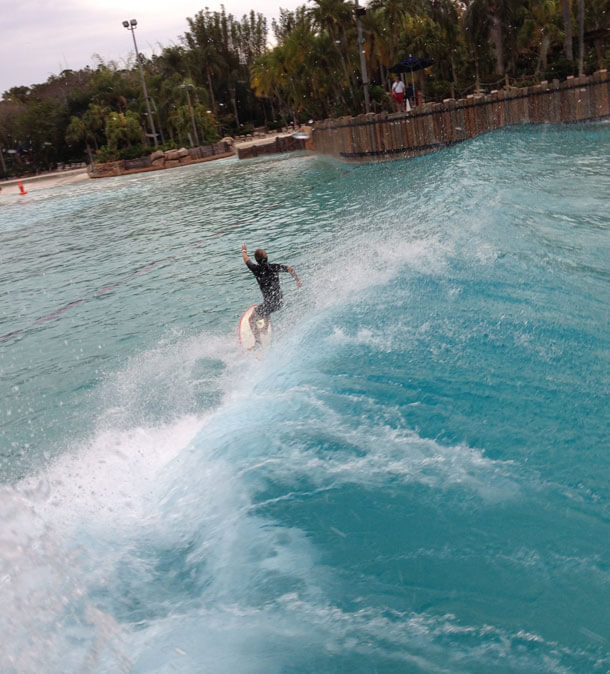 At last, our first guy got in the water and waited for the first wave.  My heart was racing just watching. Finally, we heard this huge swoosh noise and a wall of water rose up, and he paddled and took off.  It looked pretty good.  I was up next so I walked down the steps and paddled over on my 5’11 Quad to the right side so I could get my left.  I wasn’t quite sure of where to sit.  I definitely didn’t want to miss a wave, because you never ever wanna see a wave go unridden.  I heard the swoosh, I paddled and I took off.  I couldn’t get around the white water, and it was mushy.  The guy we were with had surfed the lagoon many times and said something wasn’t right with the wave. We talked to the technician on board and in a few minutes he had it fixed and granted us 20 extra waves. Suddenly this light lit up all around him. He became the wave fairy, and we all loved him. 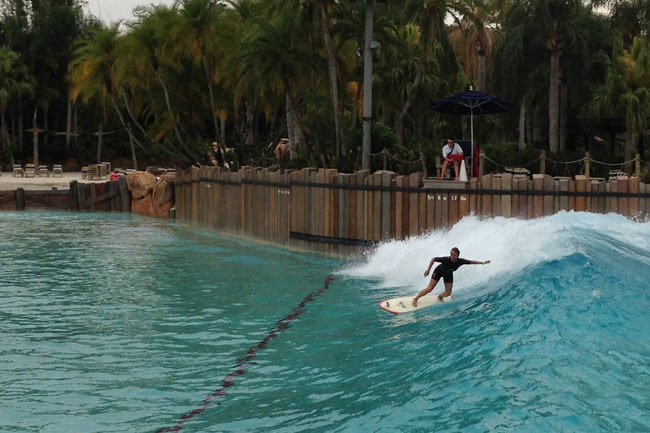 The next wave I got was much different than the first. This one had a nice wall on it. I did about three turns before I kicked out.  I thought I had found heaven. I couldn’t stop smiling. I sat at the end of the pool and watched the next guy go.  I was very impressed that we were surfing a mechanical head high wave with just us on it. After we surfed all the lefts, it was time to surf the rights. I got my first one and loved it.  Same kinda story, got about three lip hits then kicked out and walked back to get in line. I loved the rights and lefts and getting to surf them all to yourself.

After those 25 came and went we moved on to the 50 split peaks. This allowed two of us to be in the water at the same time. It is an A-frame wave where people can take off at the same.  It was fun, but I preferred the lefts and rights for several reasons. 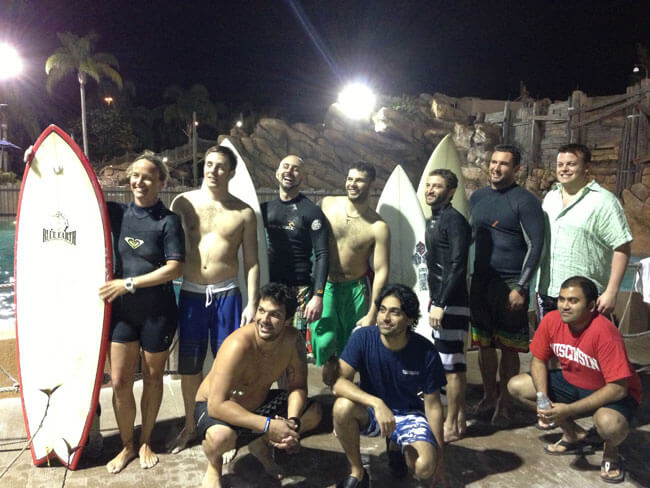 After the A-frames you had to sprint back to the peak so no waves went unridden.  So we would get a wave, sprint back and get another wave. This went on for 50 waves. This happened because a few of the guys we went with were not into surfing, so in an attempt to not miss any waves we had to run. I think we had seven surfers, so next time I would change the combo up to 35 lefts, 35 rights and 30 split peaks. The lefts and rights seemed to be better waves and definitely a longer ride. The split peaks were fun in that they were a little more steep. I think the magic number of people would depend on how many split peaks you choose. In my perfect world, I would have five of my best buddies there and we would snag lots of rights and lefts.

If you are not into surfing, you can come and watch your friends get lots of waves, just make sure you take pics of them so they are stoked!  Disney’s Typhoon Lagoon Water Park is a dream and I cannot wait to come back in the summertime when us Florida surfers set into the doldrums of flatness.