The Ins and Outs of Character Greetings at Universal Orlando

If you are making a visit to Disney World, you are likely planning on seeing Mickey Mouse, Donald Duck or one of the princesses. After all, Disney characters are well known and are prominently featured in Disney World’s advertising. Disney’s website details which characters are available to meet and where. Meeting times and locations are even posted a couple of weeks in advance, making it easy to plan for character meetings. However, it's a little different at the Universal Orlando Resort. While there are characters inside the parks, there just isn't as much planning information available ... until now. Based on my family vacation, I have put together some information to help you prepare for character greetings at Universal Orlando. If meeting the characters at Universal Orlando is a priority, you'll find the lowdown on the types of characters and where to find them in the parks right here. 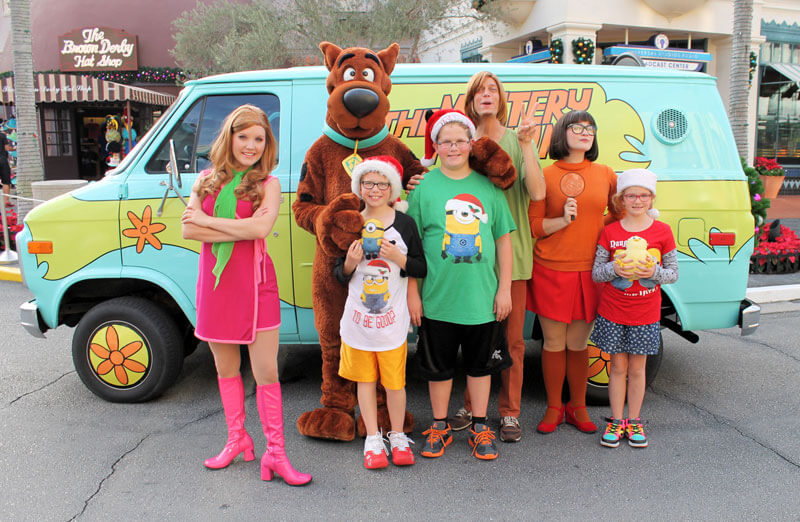 When I was planning my trip, I knew we would see at least some characters at Universal, but I was not sure how many would be available to visit. A small handful of characters appear in Universal’s advertisements, such as Despicable Me’s Gru and the Minions, but they are not as prominently featured as Disney’s characters in their ads. I downloaded park maps for planning purposes, but there were no character greeting locations shown. Based on this lack of information, I did not plan on the kids being able to greet and interact with many characters. However, after actually having been at the parks, I’m glad to report that there are many character greeting opportunities at Universal, many more than I was initially expecting.

If you are visiting Universal Orlando and want to know what characters you can expect to see, read on ...

Universal orlando characters (and where to find them) can basically be broken down into four groups, outlined here, with more details below.

Characters with a Permanent Location

A handful of characters have a permanent, set location with a defined character meeting area and a queue marked with chains or ropes. We found all of these to typically have Photo Connect photographers present, with several having a Photo Connect service desk. These characters were usually available to meet for most of the day. Jump down to details ...

Characters in a General Area

Quite a few characters do not have a set location but can be found in a general area of the parks. The guide map you receive in the parks has numbered icons (the icons were cameras on our maps) that refer to “character zones." The descriptions give times that a character is to be present and the general character that is to be there. The icons on the map are approximate for these characters without a permanent location, so you may need to explore the general area if you do not see a character when there should be one. Also, times that they are available can vary, so you will need to check with a Universal team member if you want a specific character or time. Jump down to details ...

There are a couple of shows or character party zones where characters are available to meet after the show. Jump down to details ...

As we traveled through the parks, we found the occasional character that was roaming or in an area not marked on the map as a character greeting area.

Now that you know the four general types of character greeting opportunities, I’ll detail the characters you could meet and where they can be found. This is not necessarily a complete list but a compilation of the characters we encountered during our visit. Jump down to details ...

Shrek could be found near the exit of the Shrek 4-D ride. He can be accompanied by either Donkey or Fiona, or sometimes both.

Near the TRANSFORMERS: The Ride-3D, was an area to meet Optimus Prime or Bumblebee. One note about meeting the Transformers is that the line can be closed if it is too windy. The characters are on stilts, so my guess is that too much wind makes them more unstable. 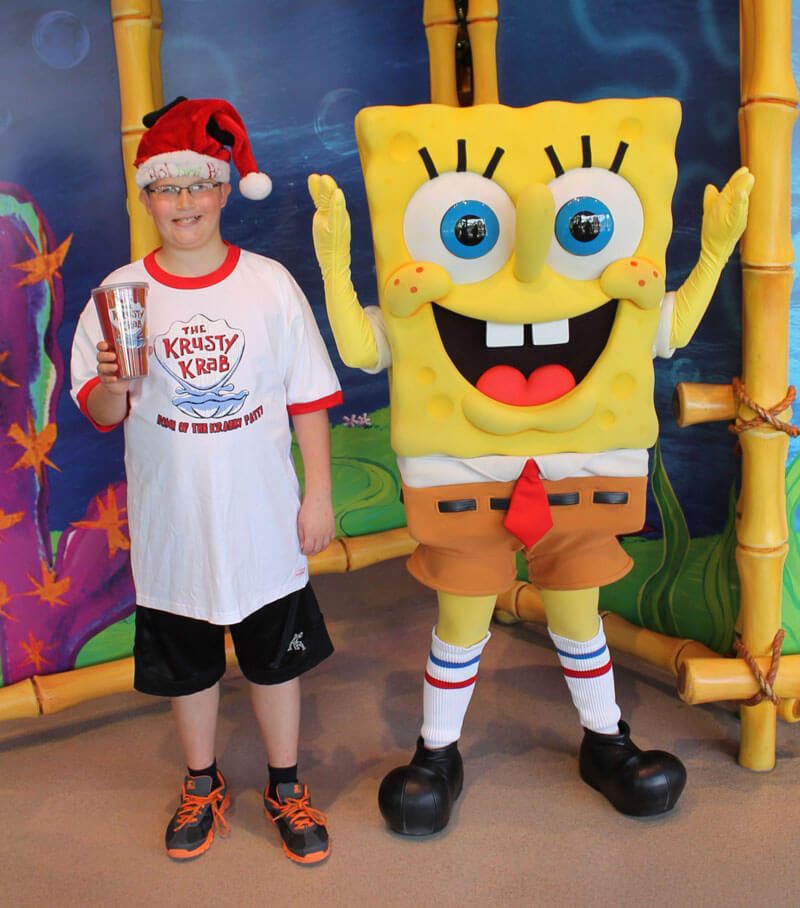 The Marvel Alterniverse Store has an area for meeting Spider-Man and having a picture taken with him in front of a green screen. After the photo has been taken, you can stop at the in-store photo desk and have a comic book cover background digitally added to replace the green screen. Note: If you have a green shirt or green design on your shirt, they will need to account for it otherwise the digital image will show through the green. 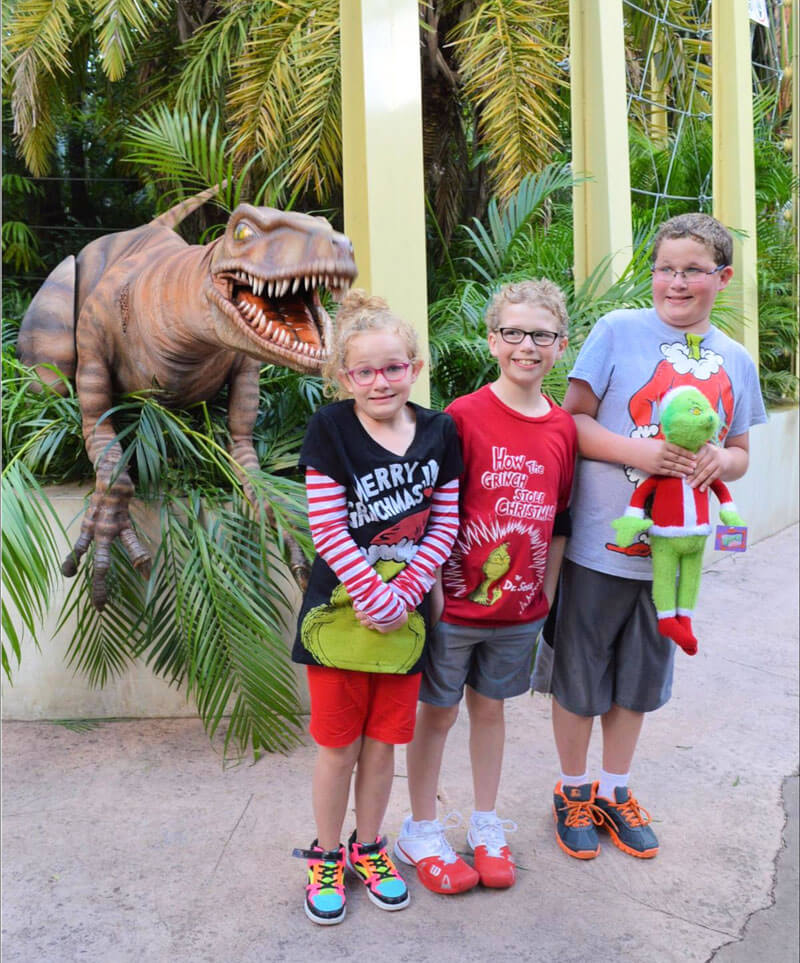 While not a typical character greeting where the kids can interact with the character, get an autograph and maybe a hug, one of the neater characters to meet can be found in the Raptor Encounter. After waiting in the line area, a number of people are admitted to a second line area where a large containment pen for a velociraptor from Jurassic Park is located. The raptor keeper/host gives a brief introduction before the raptor appears. The raptor is very life-like with its movements and sounds, so much so that all three of my kids (ages 8, 10 and 11) genuinely wondered if it was real. My 11-year-old kept asking if it was real, then tried to reassure himself that it could not be real because dinosaurs became extinct 65 million years ago.

We were near the back of the line, so my wife and I were able to enjoy the reactions of people ahead of us. Some kids were absolutely terrified and would not go near it at all. Even some of the adults were skittish when approaching the raptor for a picture and a few shrieked when it moved suddenly. My three kids were very apprehensive about posing for a picture with it, even though they were pretty sure it was not real. They forced smiles and were OK until the raptor touched my daughter’s hair bun, which made her jump, yell and scurry away from the raptor. My wife and I both thought it was really well done, and have enjoyed looking at the pictures and video with the kids. However, if you have smaller children or if they could be frightened, this is one character encounter you may want to skip. 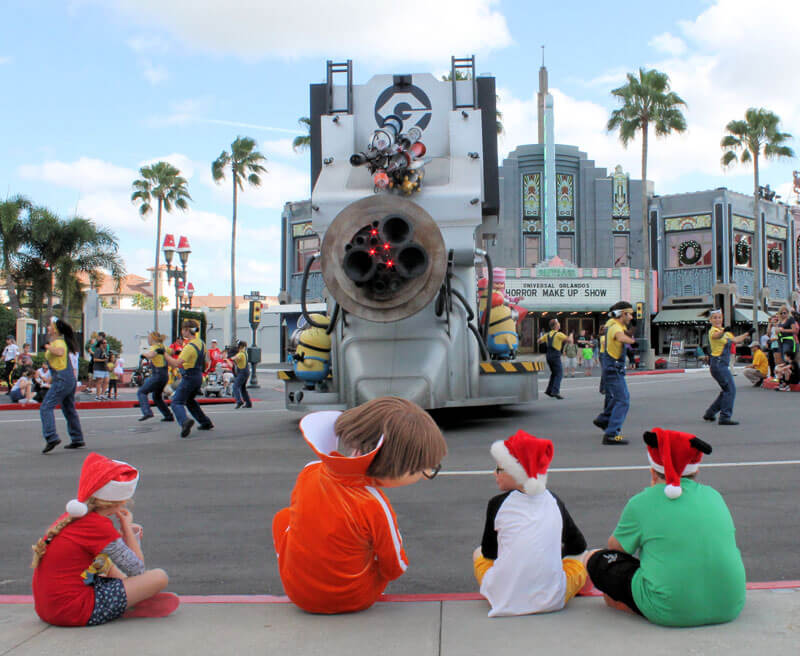 At the intersection of Hollywood and Sunset Blvd, near the Horror Make-Up Show and Mel’s Drive-In, is an area marked on the guide map for a character party zone. About every half-hour, a group of characters comes out with its accompanying float from the Superstar Parade. They have a brief performance then are available to meet with you. This was a great way to meet a number of the characters and see the detailed floats up close. Since the hours are listed in the guide map, it made it easy to plan for seeing favorite characters. We missed seeing this listing when we first arrived at Universal Studios and found out about it when we passed a show that was taking place. The next time we visited, we made sure to note the times and attend. Here are the characters we met this way: 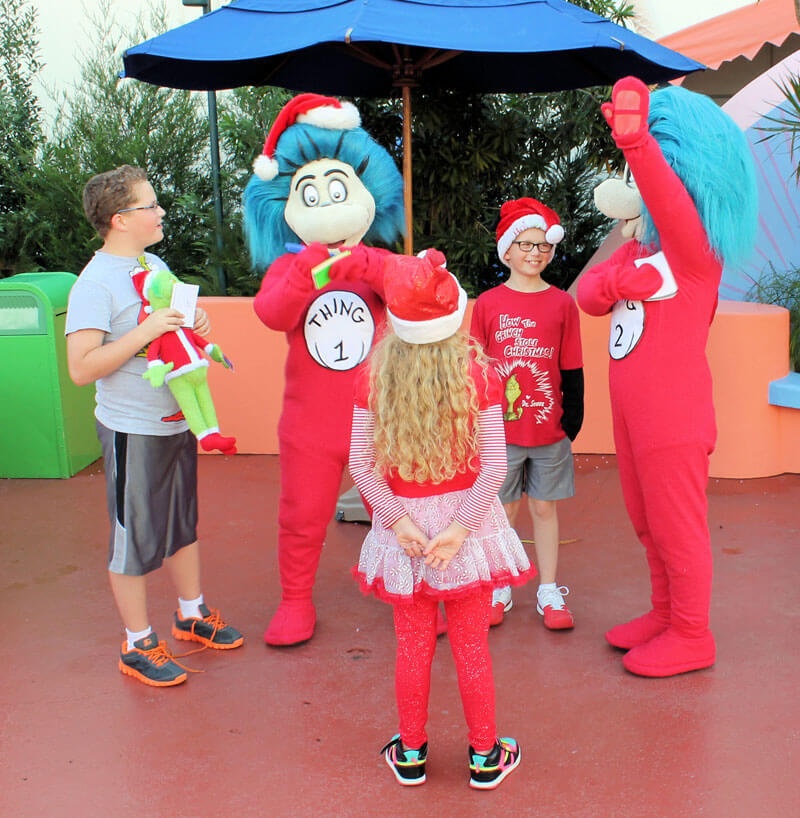 A more playful and huggable character encounter than the raptor can be found immediately following a performance of Oh! The Stories You’ll Hear on the stage in Seuss Landing. There are around six of these approximately 10-minute shows a day. Once the show ends, the characters disperse to different places in the show’s seating and viewing area. The day we attended, the characters we saw were the Lorax, Cat in the Hat, Thing 1 and Thing 2, Sam I Am and Guy from Green Eggs and Ham. The Universal website shows the Grinch in a picture from the show, but he was not part of the show that day. However, Grinchmas had just started and the Grinch in his Santa attire was meeting people in the All the Books You Can Read store.

Classic comic strip characters have meeting times listed for Toon Lagoon. We were able to meet that spinach loving sailor, Popeye, along with Olive Oyl. The kids were happy to see them, but wanted no part of Popeye’s spinach (which may have actually been more frightening to them than the raptor).

We found Curious George on Hollywood Blvd, but also saw him in Woody Woodpecker’s Kidzone. We caught Popeye near Mel’s Drive-In while watching a character party zone show. 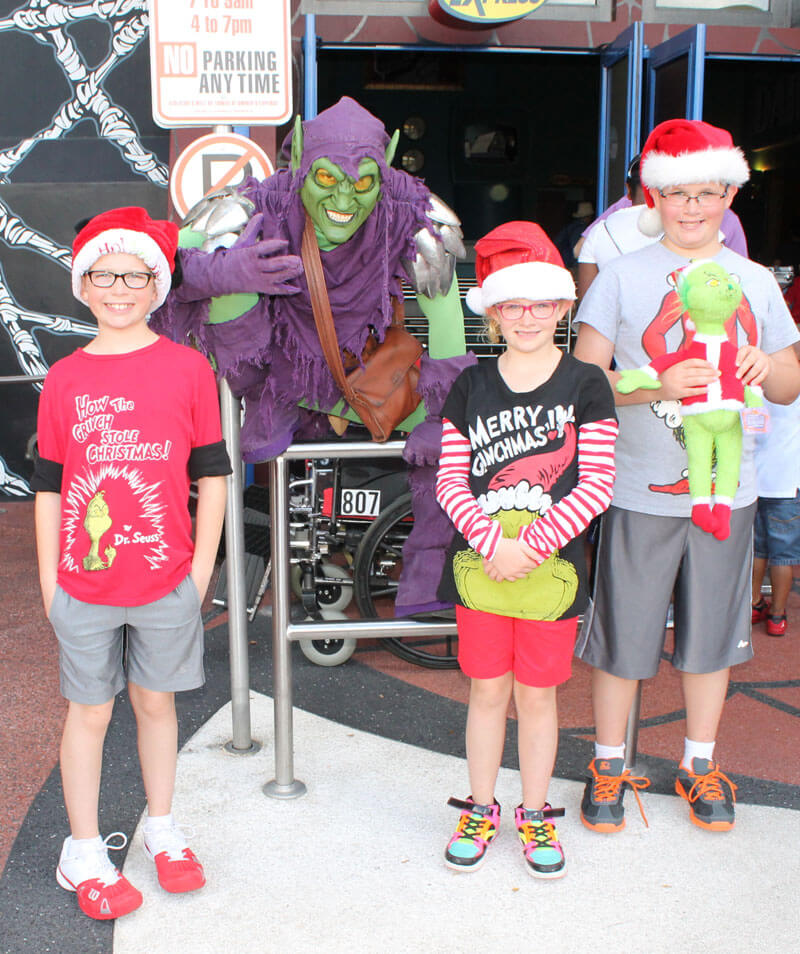 Woody Woodpecker is a classic cartoon character, but we found him in the Port of Entry area, just before Marvel Super Hero Island instead of Toon Lagoon. Walking past the Amazing Adventures of Spider-Man ride, the Green Goblin had found a perch on the metal railings for the ride’s line.

Just as at Disney World, all of the characters were very friendly and great with my kids. The Universal people with the characters that would help to manage the lines were also really friendly and more than willing to take a photo if asked. If the character was able, all of them were quite accommodating of autograph requests and would sign the kids’ books (a few of them that could not sign had a rubber stamp with their autograph). At Disney, it seems as if the vast majority of people seeing a character ask for an autograph. At Universal, I only saw a few others asking for autographs, which surprised me. If you are interested in character autographs, be sure to check out my post on creating an autograph and memory book.

Hopefully this information on character greetings at Universal Orlando will be useful to you as you plan for an upcoming trip. Please share any tips of your own or questions below.