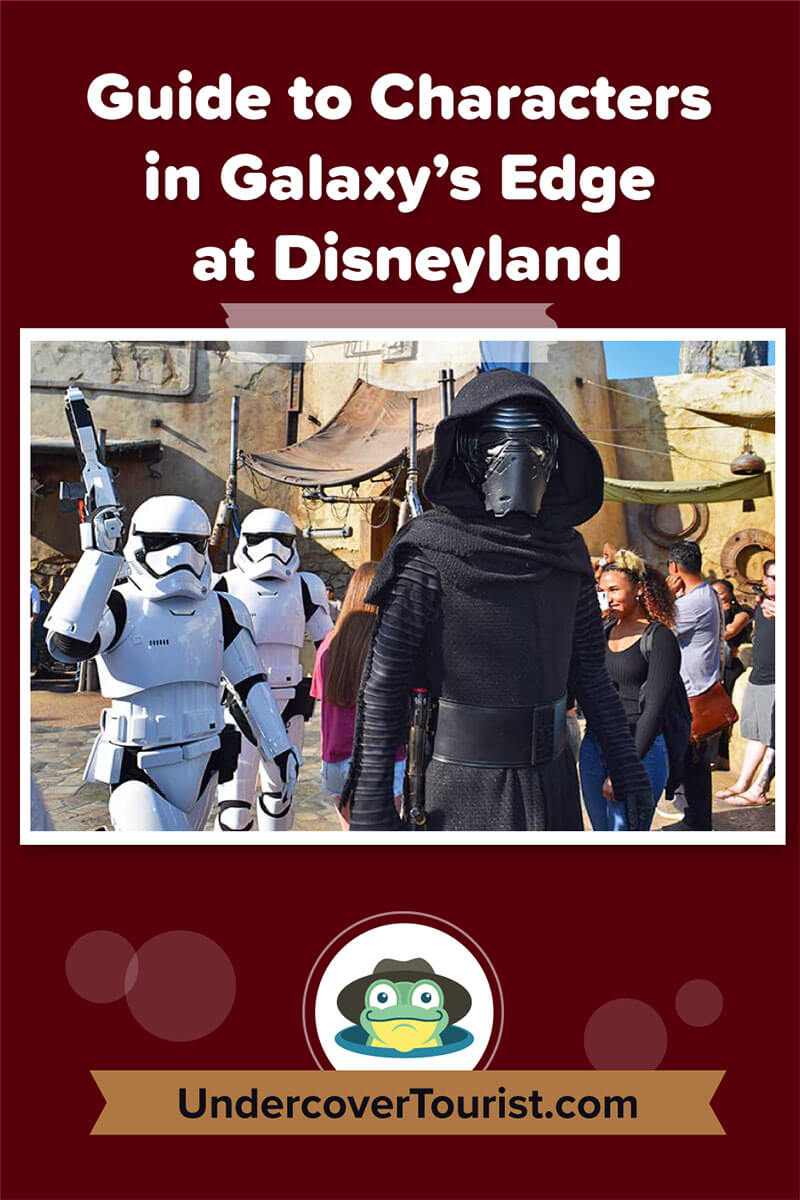 When you visit Star Wars: Galaxy’s Edge at Disneyland, you become immersed in another world. It’s a land that differs from the rest of Disneyland in its sights, sounds, foods, experiences and the characters you meet. The characters in Galaxy’s Edge live in that world and are part of that story, which is toadlly cool, especially if you are a huge fan of the "Star Wars" movies. But that means you’ll have to approach them differently than you might when you meet other characters in other parts of Disneyland.

When characters in Galaxy’s Edge meet a visitor to their planet, such as you, you become part of their story. You are a visitor in their land. Unfortunately at this moment, we earthlings potentially carry a virus that may infect the inhabitants of Batuu. For that reason, the characters are temporarily keeping a safe distance, rather than roaming around. No doubt you want to meet them, so here’s our ribbeting guide to meeting characters in Galaxy’s Edge for the short term, followed by the ways you can meet them once this risk of virus transmission passes.

Our Guide to Meeting Characters in Star Wars: Galaxy's Edge During the Pandemic

Whether you are looking to join the Resistance or the First Order, were's where to find — or avoid — Star Wars characters in Galaxy's Edge right now.

Where to locate Resistance characters

Across from Droid Depot is a speeder garage. You may find Rey or Chewbacca up above or on the surrounding rocks. They may on the lookout for danger or for people to join the fight. Vi Moradi, the spy, may be in the garage. we've gotten word that Chewbacca has been seen at the Millennium Falcon lately, but still distanced from guests.

Where to find members of the First Order 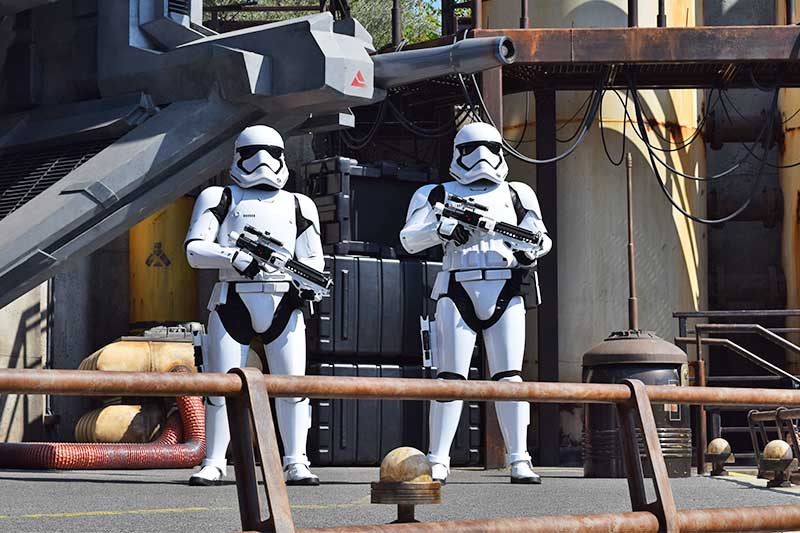 Watch out for Stormtroopers, along with Kylo Ren, patrolling the platform in front of the TIE Echelon starfighter. You might find stormtroopers keeping watch from above. We've recently caught stormtroopers walking around on the ground. They did not stop, but they still interacted with guests, so perhaps we will see more of them soon.

Guide to the Characters in Star Wars: Galaxy’s Edge in Less Risky Time.

First of all, there are no official character meet-and-greets in Star Wars: Galaxy’s Edge. There’s no line or a guarantee to get that perfect photo and dedicated time with any particular character. They aren't celebrities. The characters are free-roaming, doing their jobs and walking around as citizens, workers or visitors on the planet Batuu. They are very busy and have things to do. You can encounter them, talk to them and walk with them. Depending on the character, they may order you around, intimidate you, play with you, talk to you, enlist your help or may be willing to pose for a picture. You might get a hug, but you might also get interrogated. It depends on the character, and it's all part of the magic of becoming part of their world.

Here’s what you can expect when encountering each character in Galaxy’s Edge. 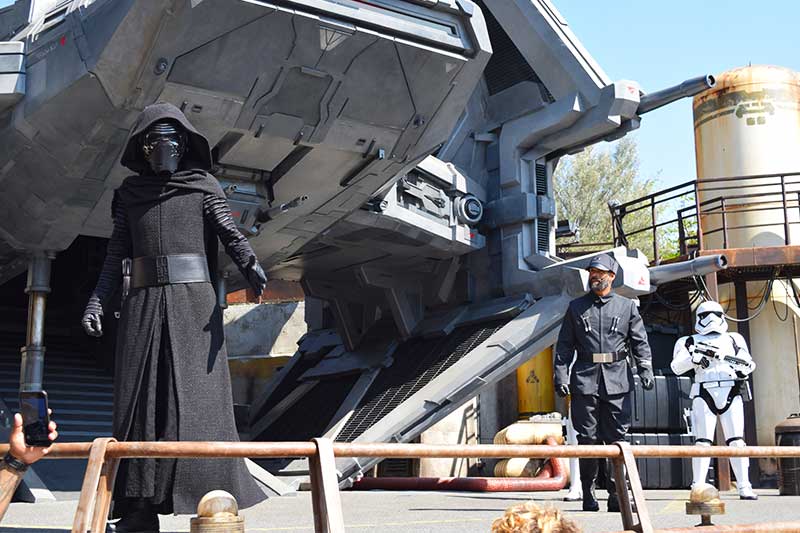 Kylo Ren – Kylo Ren stalks about, usually flanked by two stormtroopers and sometimes an officer of the First Order. I have to admit, Kylo Ren is intimidating. That's how he's supposed to be, so just have fun with it. Use the Force to thwart his powers if you must. His territory is from the Millennium Falcon, past the Milk Stand, all the way over to Savi’s Workshop. He may be rude and tell you to get out of his way. He may ask if you are loyal to the First Order. At times, when he enters and exits, he’ll use the stage area in front of First Order Cargo. He likes a dramatic entrance or exit. Do not go looking for him. Chances are, if you stay still, he’ll come by. He’s probably not going to pose for pictures with you. He has his own agenda. You’ll have to be clever to get that selfie or shot. But he might agree to a photo. It just depends on his mood and whether you please him and show proper respect or not. 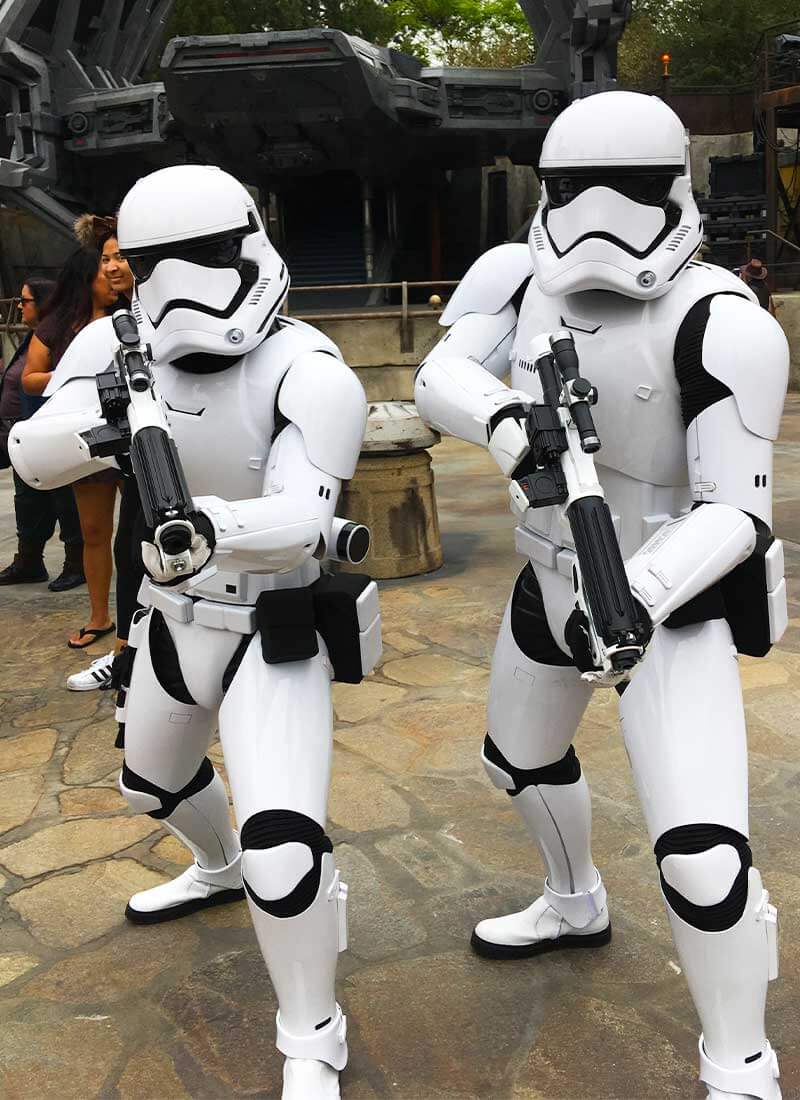 Stormtroopers – Stormtroopers are the most common character we seem to encounter in Galaxy's Edge. You may see stormtroopers patrolling the land, usually in groups of two. They may be on their own, or with Kylo Ren. Sometimes a First Order officer joins them. At times, they appear on the stage by the First Order Cargo. Be sure to look up ... sometimes they watch the activity from the rooftops! You may see them in front of the Millennium Falcon, near Oga’s Cantina and around Droid Depot and Savi's Workshop. They talk to park guests, check IDs and can be quite funny. They might inquire about your droid's personality chip ... and yours, too!

They asked Mommy Frog if she was loyal to the First Order. She did not want to get arrested, so of course she said “yes” and they told her, “Good. Gold star day for you!” It was a toadally funny moment. They may or may not pose for photos. If you are waiting to build a lightsaber at Savi’s Workshop and the stormtroopers or Kylo Ren come by on their patrol, do not let on what you are doing. Shhh … the gatherers work in secret. Don't give their location away. 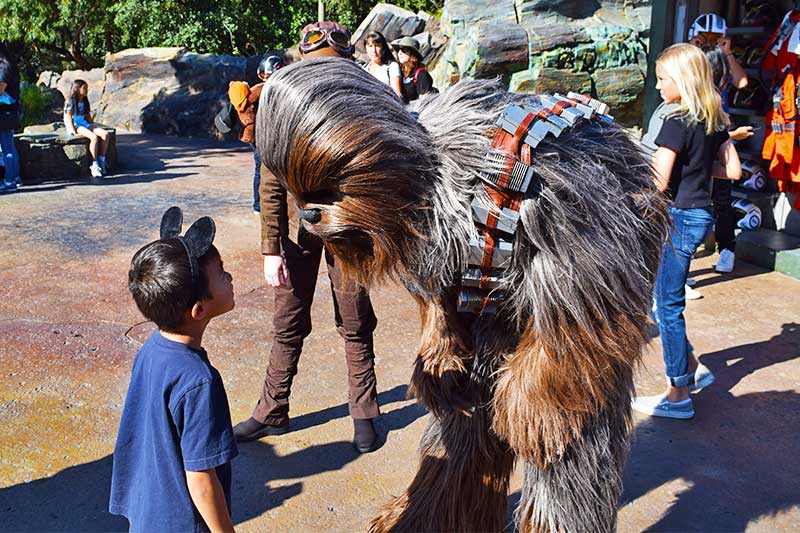 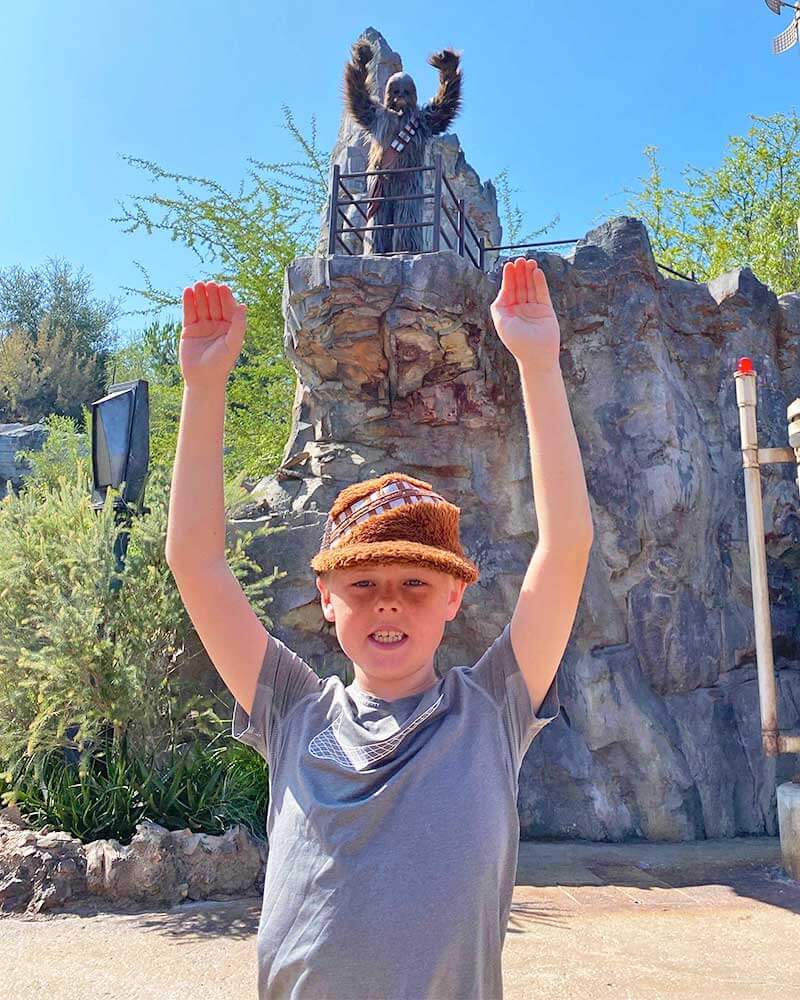 Chewbacca – Chewie is my favorite character in Star Wars: Galaxy’s Edge. We’ve caught up with the Wookiee in the Resistance area, near the Star Wars: Rise of the Resistance ride. He's got all the warm, fuzzy feels in contrast to the coldness of the First Order characters. He might make repairs to controls, hang with his buddies, Rey or Vi Moradi, and teach kids how to speak Shyriiwook. We’ve caught him hiding from stormtroopers in the marketplace, photobombing pictures near the Millennium Falcon and teaming up with Vi Moradi, the spy. He’s always good for a good, long hug and is usually happy to pose for a picture, if you ask nicely. He's usually hoppy to give a high five, but he might leave you hanging just for the laugh (at your expense).

Even if you cannot hug him during the pandemic, you can still have meaningful interactions. Show off your resistance clothing, ask him questions and send him virtual hugs. 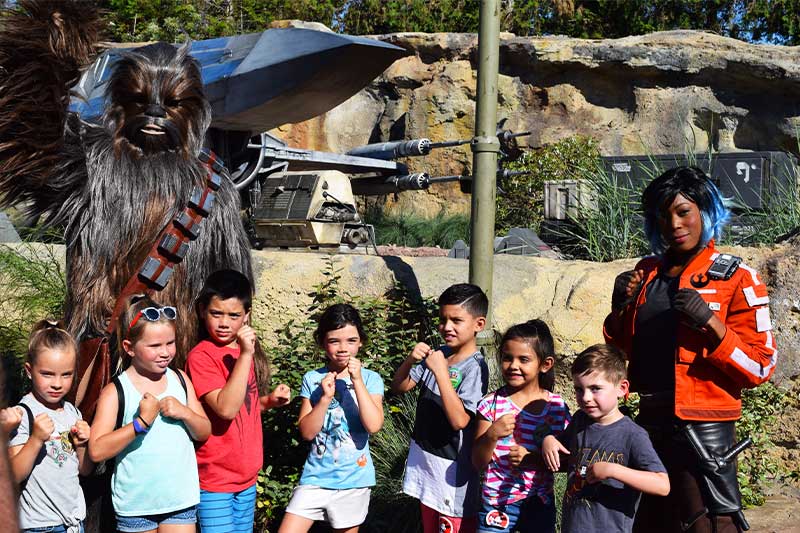 Vi Moradi - Kylo Ren and the First Order are always on the lookout for Vi Moradi, a Rebel Spy who wears the orange jacket and blue hair. She is always trying to avoid them. It's all part of the ongoing story of the village of Black Spire Outpost on Batuu. She must a be a good hider, because we’ve only caught sight of her a few times ourselves. One of them was when she was playing with Chewbacca and training some young Padawans. 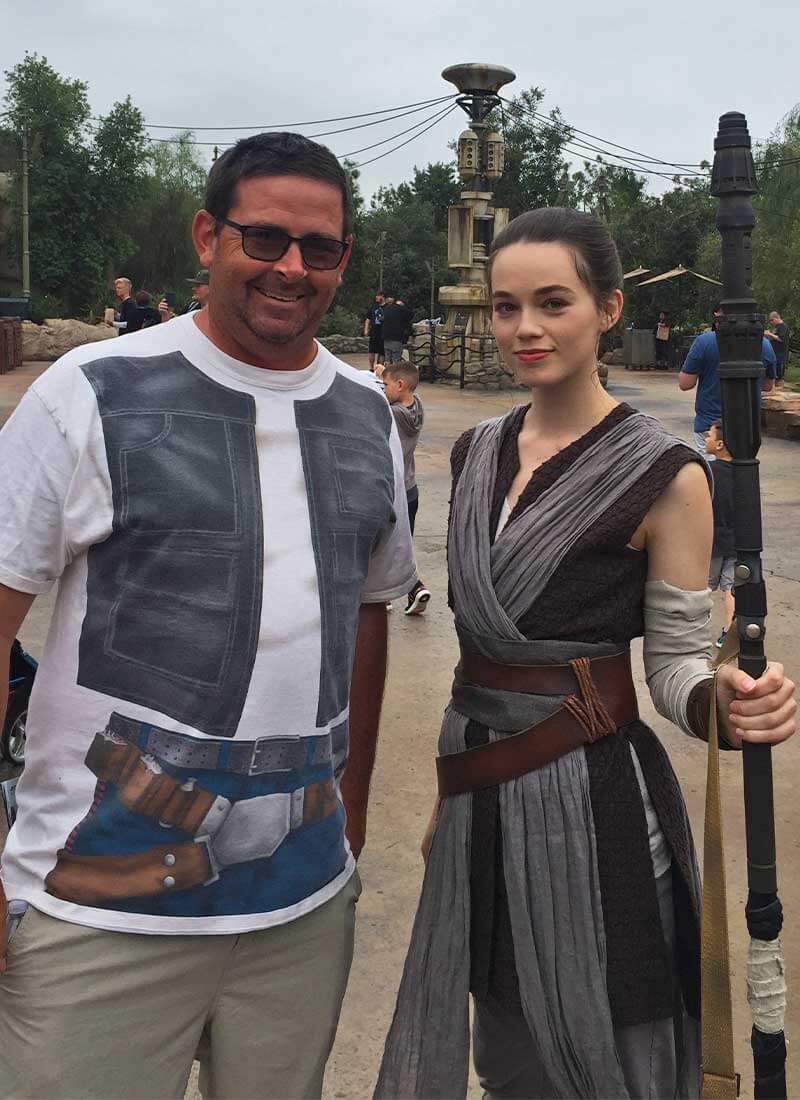 Rey – Rey is more elusive, but you can generally find her in the Resistance area and near the ships on the way to the Millennium Falcon. She'll probably try to recruit your support for the Rebellion. She's a bit guarded, but if you know her story, you can understand why.

R2-D2 – One of our favorite droids is now a free-roaming — or should I say rolling — character! We recently caught up with our favorite droid, traveling through the streets of Batuu. If you are lucky, you just might catch one of these outings. He emerged from an area to the right of the landspeeder garage. His lights and sounds were operating, and was on high alert for droids and people loyal to the First Order. What will he find out if he scans you?

If he is not making his rounds during your visit, you can hop into Droid Depot to say hello to his replica and take a picture with him. We have seen the Droid Depot R2-D2 with lights on and making noise. Usually, he is "napping." You can purchase a replica of him, but he costs a lot of credits (that's dollars in English). You’re better off building your own mini droid who looks like him for much less. 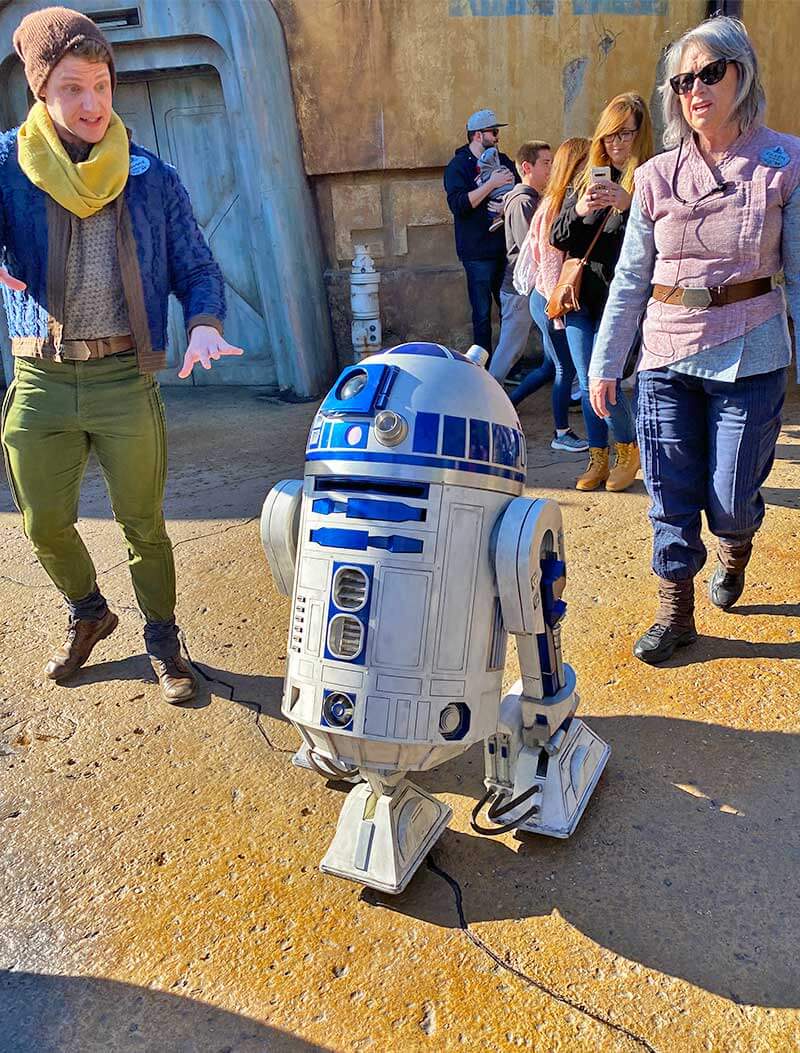 Cast Members - The cast members who ring you up, take your images, serve you food, check you in at Oga's Cantina and assist you in building a droid or custom lightsaber are all in character. These people live on Batuu and have their own language, Aurebesh, which sounds a lot like English. They cannot talk to you about Disneyland or things that are from Earth. They inhabit Black Spire Outpost and can only answer your questions from that perspective.

It adds to that immersive feeling of visiting their village. Ask them about their life. Greet them with, "Bright suns" in the early part of the day and, "Rising Moons" as the sun sets. You can read more about their language and phrases in Tad's Galactic Guide to Star Wars: Galaxy's Edge at Disneyland.

That’s about it when it comes to characters in Galaxy’s Edge. There are a few more droids, such as DJ Rex in the Cantina, still trying his best to play music, and animatronic characters, such as Dok Ondor in his Den of Antiquities or Hondo Ohnaka, who you’ll encounter when in queue for Millennium Falcon: Smugglers Run. But these beings do not interact with guests. 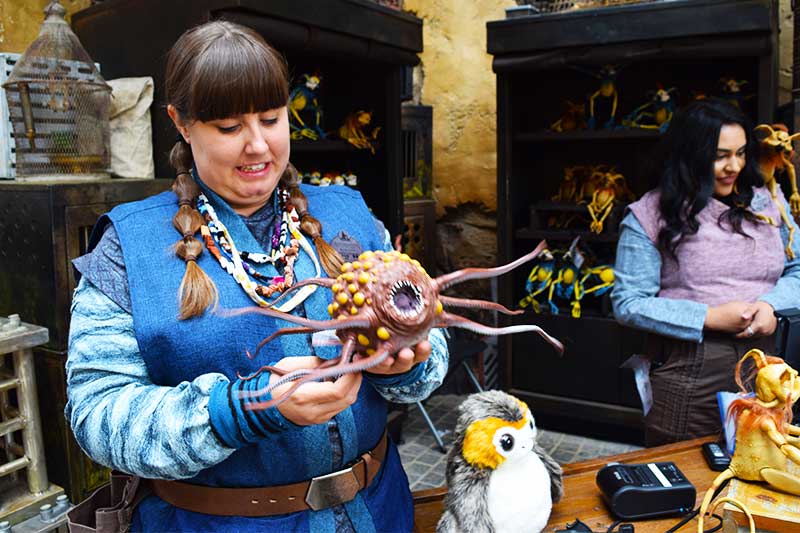 If you build a droid at Droid Depot, your droid may react to some of the characters and droids in the land. It's a fun way to further immerse yourself into the world of Star Wars: Galaxy's Edge.

Another way to interact with the land and characters is to use the Datapad on your smartphone. You can access it through the Play Disney Parks app. You can choose a side, working undercover to help the Resistance, or pledging loyalty to the First Order. Maybe you are a scoundrel, striking out on your own! You can hack into First Order control panels or mess with areas vital to the Resistance. Perhaps the First Order will catch you, or Chewbacca will have to undo your mess. But if you get caught hacking into the control panels for the First Order, there's no telling what they might do with you! We've seen citizens get arrested. Just sayin'.

If you want some time with Star Wars characters in a traditional Disneyland meet-and-greet fashion, hop over to Star Wars Launch Bay in Tomorrowland. There, you can meet Darth Vader or Chewbacca. It’s a nice way to get private one-on-one time and perfect photos of your experience. Darth Vader does not appear in Star Wars: Galaxy’s Edge. That land is set in Kylo Ren’s time. Fans of the movies understand why they would not appear in the same place or time.

Which Star Wars: Galaxy's Edge characters would you be most excited to meet? Let us know in the comments below. If you are planning a trip to Galaxy's Edge, it's located (far, far away) inside Disneyland, so you'll need admission to Disneyland to access it. Your favorite frogs at Undercover Tourist can help you save money on Disneyland Resort tickets and hotel stays both on-property and nearby. Ribbit, ribbit!

Related: All the Ribbeting Details You Need to Build a Lightsaber at Savi's Workshop at Disneyland 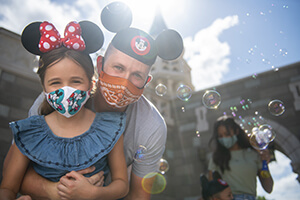