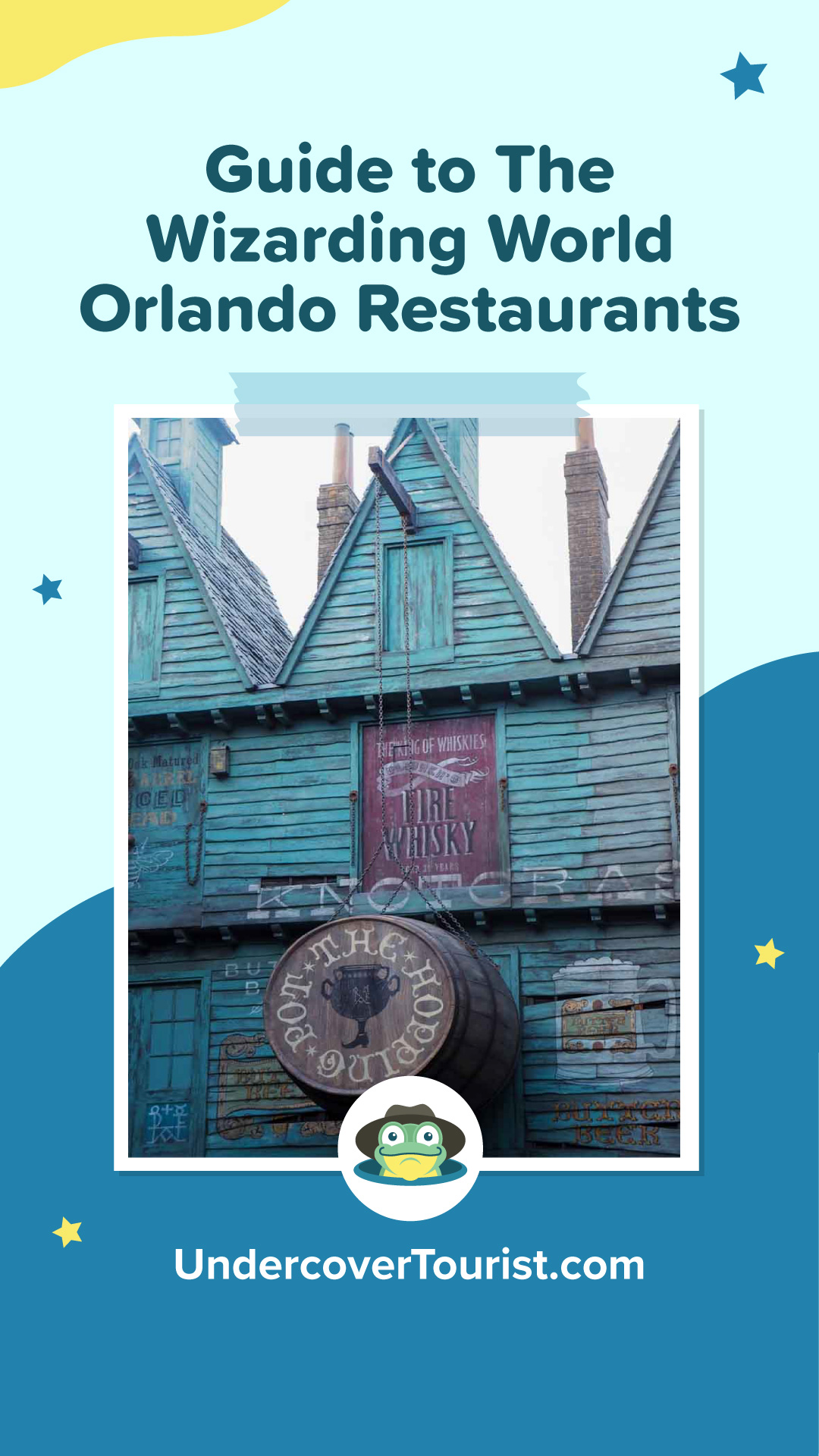 Don’t get me wrong … Butterbeer is toadally worth the hype and deserves to be The Wizarding World of Harry Potter’s most iconic menu item. (We’ve even devoted an entire guide to all of the types of Butterbeer you can find in Hogsmeade and Diagon Alley!) But there are so many other magical food and drink options beyond Butterbeer. And perhaps best of all, The Wizarding World of Harry Potter Orlando restaurants provide an immersive experience for Harry Potter fans who have imagined themselves eating ice cream at Florean Fortescue’s or sipping on pumpkin juice or a Butterbeer at the Three Broomsticks. If only there was a spell that would empty a full stomach so you’d never have to worry about getting too full ;)

The Wizarding World of Harry Potter Orlando Restaurants in Hogsmeade

In the Harry Potter series, the Three Broomsticks is a popular pub and inn frequented by Hogwarts students during their weekend trips to Hogsmeade, the only all-wizarding village in Britain. Universal Creative worked together with the production and art designers from the original films to nail down the nitty-gritty details needed to bring this restaurant to life. You’ll notice the same light fixtures from the films, as well as (inaccessible) staircases that lead up to the inn’s rooms above the dining area. You may even spot the shadows of house-elves hard at work! 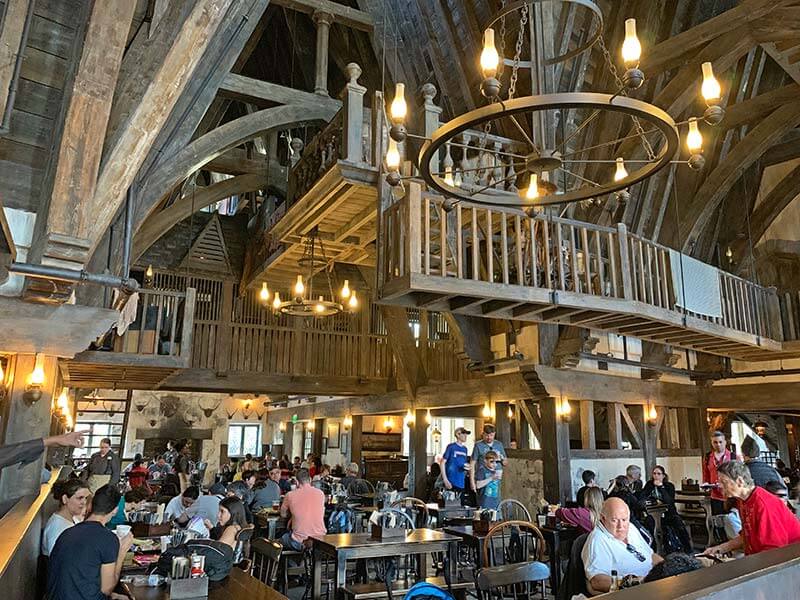 Rounding out the restaurant’s authenticity is traditional British pub fare. The menu includes fish and chips, shepherd’s pie and beef pasties, as well as smoked chicken, turkey legs and spareribs platters. While it may not be the exact same experience as dining in the Great Hall inside Hogwarts, the Great Feast is perfect for hungry frog families to share. The platter includes garden salad, rotisserie chicken and spareribs, corn on the cob and roasted potatoes. It easily feeds our family of four, as Lily’s portion is usually too much for her. But that just means extra food for Leap and Tad! 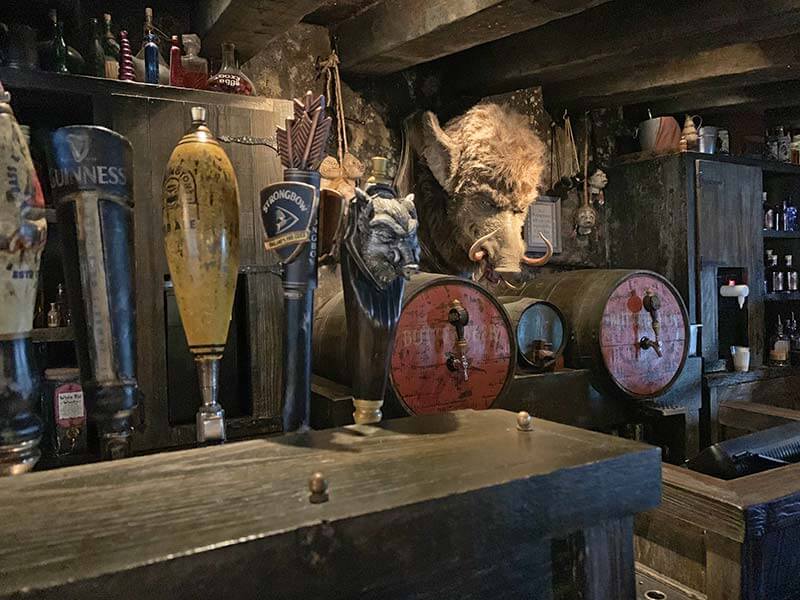 In the books, the Hog’s Head is a tavern owned by Aberforth Dumbledore (yes, Albus Dumbledore’s brother!) and is known for being dodgy and dirty. However, at the Wizarding World of Harry Potter, the Hog’s Head blends in with the Three Broomsticks. It’s a bar attached to the right side of the restaurant. You can’t miss the large tankards of Butterbeer and a literal stuffed hog’s head hanging on the wall. In addition to Butterbeer, pumpkin juice, gillywater, beer, wine and mixed drinks are available. Leap really likes the specialty Hog’s Head Brew, which was created exclusively for the pub. 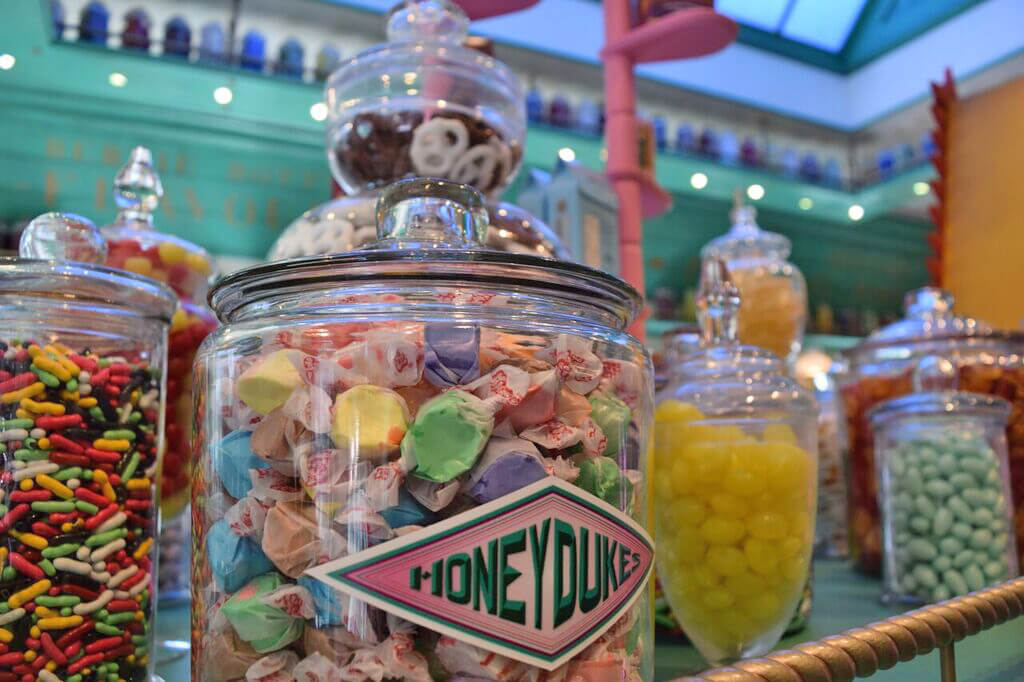 If we’re getting technical, Honeydukes is a candy store and not one of The Wizarding World of Harry Potter Orlando restaurants. But we can’t simply leave it out since it’s home to a bunch of magical treats and sweets! This is where you can find all of the delicious desserts straight from the books, such as Cauldron Cakes and Pumpkin Pasties. My personal favorite is a box of Bertie Bott’s Every Flavour Beans! For muggles who aren’t familiar with these jelly beans, they come in all flavors ranging from tasty to terrible. (Trust me, you DO NOT want to end up with the vomit-flavored bean.) Honeydukes also has Chocolate Frogs — another popular sweet that comes with a collectible card of a famous wizard or witch. 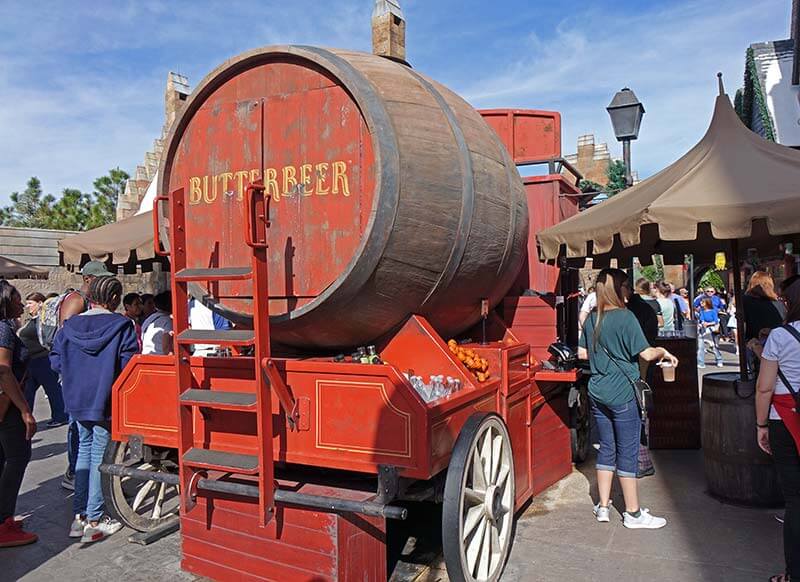 If you’re on a mission solely for Butterbeer, Hogsmeade has two outdoor Butterbeer carts that serve the cold and frozen versions. There is one right in front of the Three Broomsticks, and the other is next to the bridge that overlooks Hogwarts Castle. 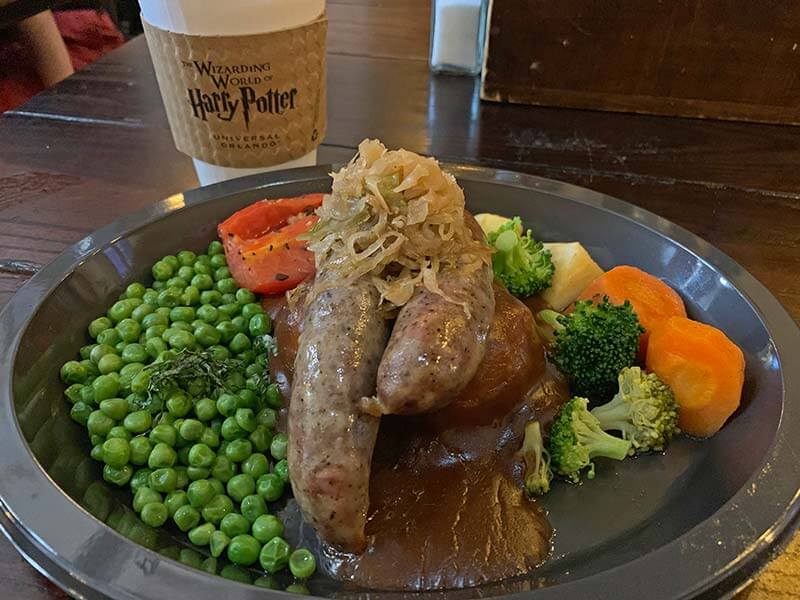 Out of all the Wizarding World of Harry Potter Orlando restaurants, I’d have to say The Leaky Cauldron is my favorite, not only for the food but also its significance in Harry Potter’s journey. This was where Harry himself was first introduced to the Wizarding World! You even get to walk through the brick wall into Diagon Alley, so it feels like you’re being immersed into the world the same way. (Although here, The Leaky Cauldron lies just beyond that wall instead of acting as a barrier between the muggle and wizarding worlds, but it still looks exactly like it does from the films.)

The restaurant is technically counter-service, but you are seated at a table and given a magical candlestick so your food can be delivered straight to you. Accio, fish and chips! The Leaky Cauldron has a variety of traditional English foods, such as Bangers and Mash, Fisherman’s Pie and Toad in the Hole. You can also split the Ploughman’s platter, which serves two and consists of cheese, bread, scotch eggs, cornichon pickles and veggies. 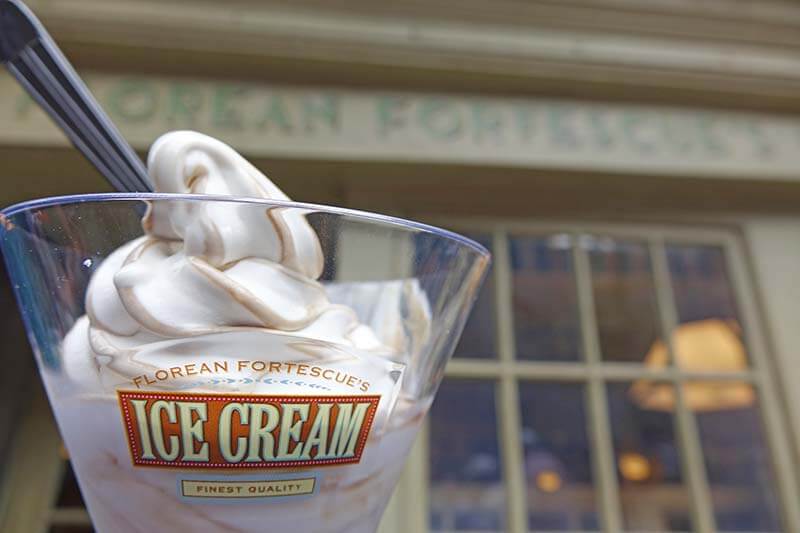 It doesn't matter whether you're in the muggle or magical wizarding world — ice cream is a universal (ha, pun intended!) crowd-favorite treat. The exterior is inviting, with the giant cone atop the display windows, and has a cheery atmosphere once you walk inside. In the books, Harry Potter works on his homework while eating ice cream sundaes. While you're probably not working on homework at The Wizarding World of Harry Potter, you can get your own scoop or cone and try out some of the interesting flavors, such as Chocolate Chili or Earl Grey and Lavender. Of course, you can opt for the super popular Butterbeer soft-serve! 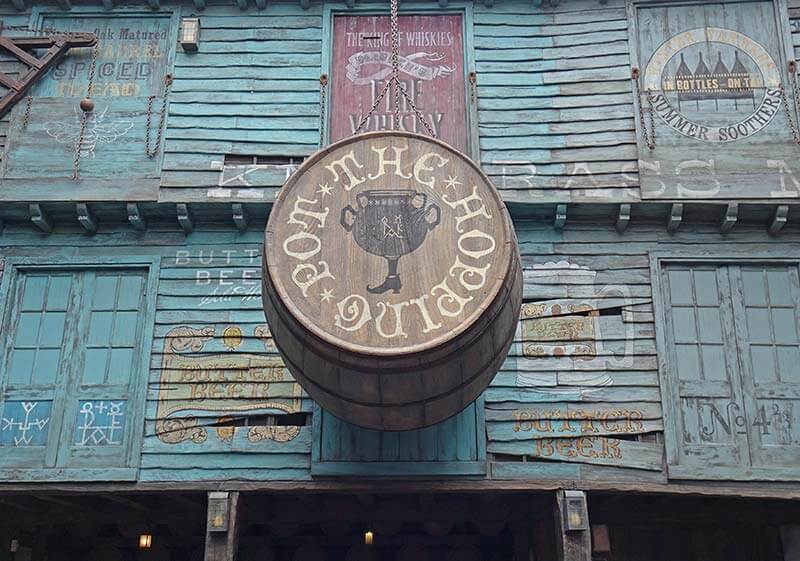 This outdoor, walk-up counter spot is a great place to get Butterbeer on the go in Diagon Alley. (However, on busier days, a long line can build up.) It also serves Tongue Tying Lemon Squash, Otter’s Fizzy Orange Juice, Peachtree Fizzing Tea, Fishy Green Ale and pumpkin juice. For muggles 21 and up, Wizard’s Brew and Dragon Scale beers, along with Firewhisky, are available. Enjoy your drinks at one of the picnic tables or in front of the stage nearby to watch Celestina Warbeck and the Banshees perform.

The Fountain of Fair Fortune 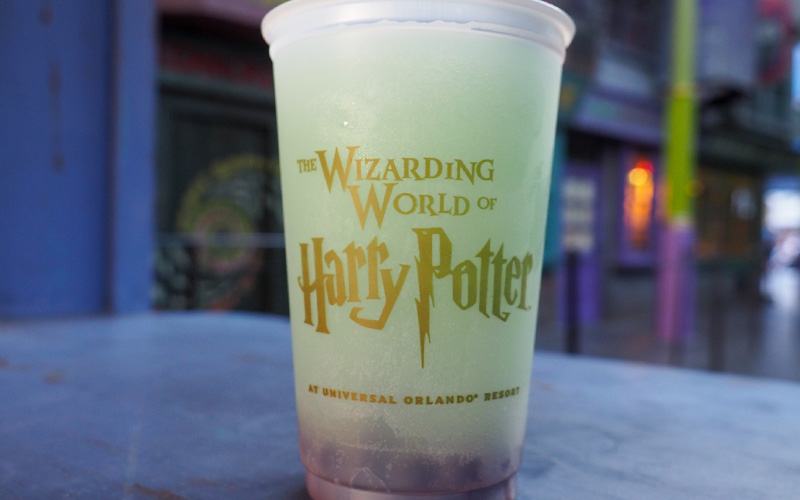 The Fountain of Fair Fortune, which is named after one of the children’s fables in “The Tales of Beedle the Bard,” serves up drinks. You can find Butterbeer, pumpkin juice, Fishy Green Ale (nonalcoholic) and Fire Protection Potion, among additional alcoholic beverage options. This spot usually has a smaller line than the ones at The Leaky Cauldron and The Hopping Pot, so if those lines are too long, check out The Fountain of Fair Fortune.

Honeydukes isn’t the only place you can find wizarding sweets. Over here in Diagon Alley, pay a visit to Sugarplum’s Sweet Shop if you need a Cauldron Cake fix. You’ll find most of the same items at Honeydukes, so if you froget to pick up a box of Peppermint Toads in Hogsmeade, don’t fret! Also, these two candy stores are the only places you can find Butterbeer fudge.

Which ones of the Wizarding World of Harry Potter Orlando restaurants are you most excited to dine in? Do you have your eye on a special dish or beverage from Hogsmeade or Diagon Alley? Let us know in the comments below!

Related: Our Complete Guide to Butterbeer at Universal Orlando (and Where to Find It!)