One of our favorite times to visit Walt Disney World is during the fall season (we've got a solid list of reasons!). This year, things are a bit different since Walt Disney World reopened with new health and safety measures. However, it's not stopping us from having Halloween fun at Walt Disney World, which will include special cavalcades, wickedly mouthwatering treats and the opportunity to wear costumes at Magic Kingdom Park during regular park hours.

We hopped over for the first day of this year's scaled-back Halloween festivities at Magic Kingdom, and we'll be hopping back soon for more updates. Keep reading for our first-day report on all of the ghoulishly delightful details at Magic Kingdom! Plus, we round up all of the other Halloween hoppenings around Walt Disney World, including the special Halloween character experience featuring hostess Minnie Mouse and her friends that is returning to Hollywood & Vine at Disney's Hollywood Studios. 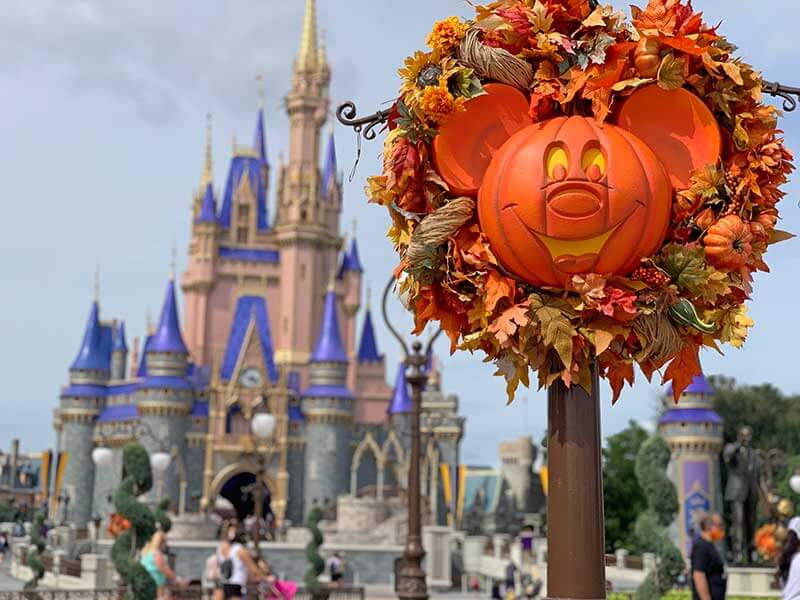 Starting Sept. 15 through Oct. 31, 2020, celebrate the spooky season at Magic Kingdom. Even though Mickey’s Not-So-Scary Halloween Party isn’t hoppening this year (though it's not too early to start planning for the Magic Kingdom party next year), that doesn’t mean Halloween itself is canceled! The park's fall festivities and special seasonal offerings will surely get your frog family in the spooky spirit, but we should set realistic expectations.

The decor and entertainment is noticeably toned down from the usual offerings during Mickey's Not-So-Scary Halloween Party. After all, the Boo-To-You parade, fireworks, stage shows and character meet-and-greets cannot take place this year. While pumpkin Mickey wreaths are plentiful, the extravagant garland and scarecrows are missing (but we'll keep an eye out in the coming days to see if more decorations pop up). Families hoping to get their usual full-on fall and Halloween fix at Magic Kingdom will likely be disappointed by the scaled-back offerings, but on the plus side, there are fewer crowds, and no mass gatherings for parades and Castle stage shows. Plus, some familiar experiences are still hoppening! 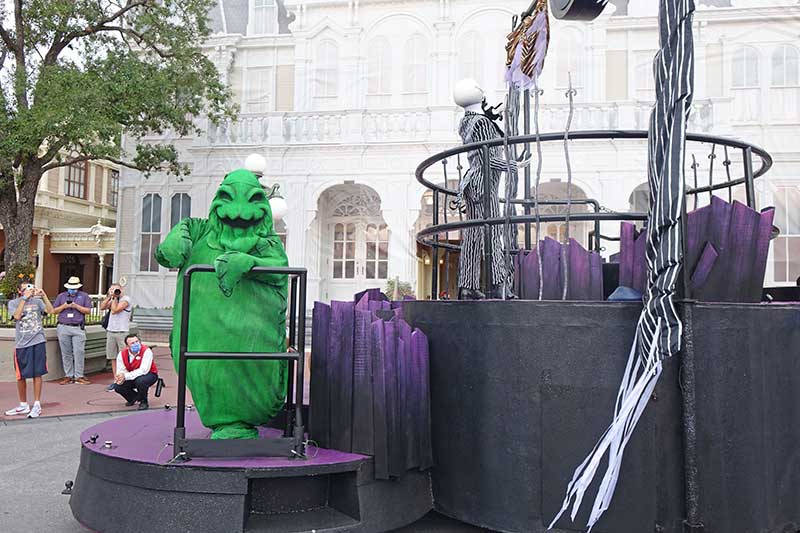 We LOVED seeing our favorite characters in cute costumes as they marched down Main Street U.S.A. in cavalcades or popped up in other areas of the park. (BTW, the ever-so-catchy "Boo to You" song plays during Mickey's Halloween Cavalcade!) We also enjoyed seeing all of the creative outfits and costumes worn by fellow frogs. 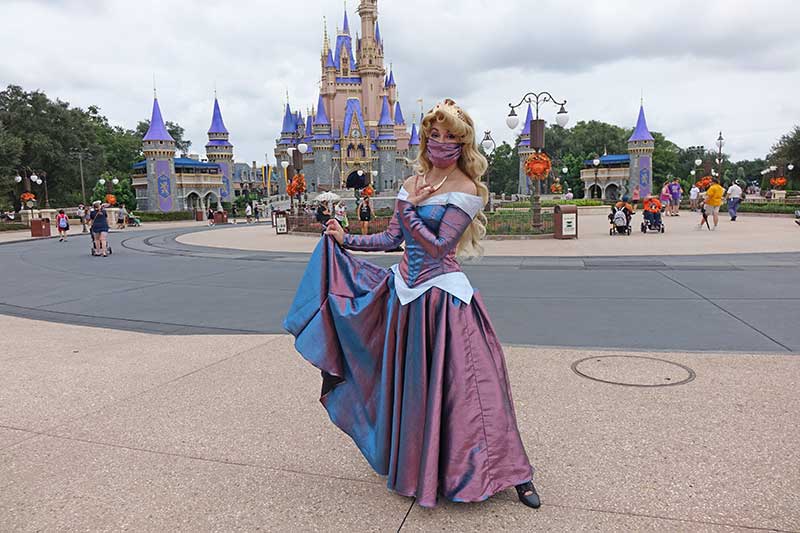 During Mickey's Not-So Scary Halloween Party, it can be overwhelming to get everything done within five hours of party time. With Halloween festivities taking place during regular park hours this year, our experience was super relaxing! We were able to watch the cavalcades multiple times throughout the day and eat yummy treats. Wait times stayed about roughly the same (or even lower at times!) for a majority of the rides, compared to a sold-out MNSSHP — thanks to limited capacity through Disney Park Pass reservations.

Without further ado, let's move on to what you need to know if you're planning a Halloween trip this year. From costumes to cupcakes, here are seven ways to join the fall fun at Magic Kingdom!

Instead of parades that create crowds and follow a strict schedule, Magic Kingdom introduced mini cavalcades that hoppen randomly throughout the day, so guests can still get their character fix in during these socially distanced times. 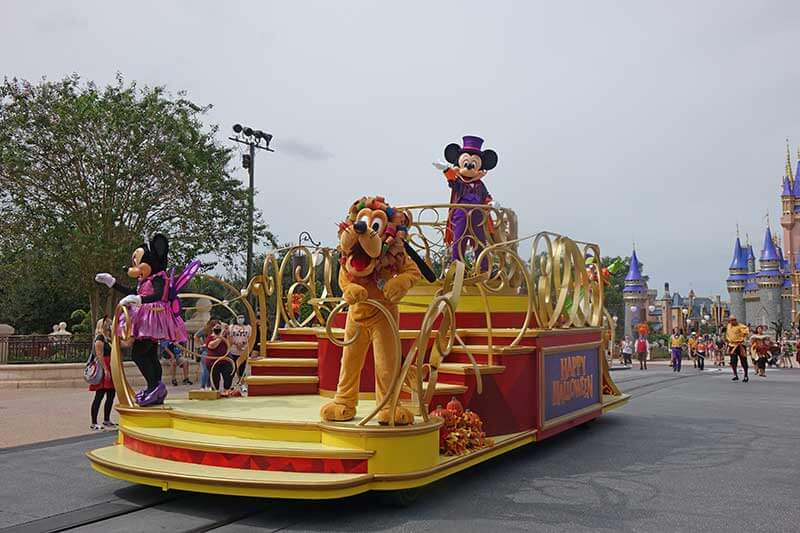 Now that it’s fall, Mickey, Minnie, Pluto, Donald and Daisy star in a special Halloween-themed cavalcade. Their costumes melted my heart! The Disney pals are sandwiched in between dancers dressed as Sugar Rush racers (from "Wreck-It Ralph"), Haunted Mansion grave diggers and pirates. 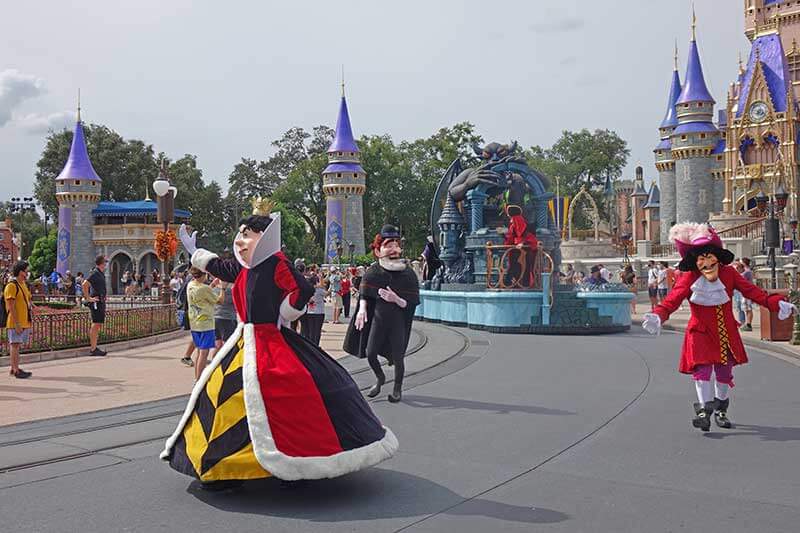 Your favorite Disney Villains star in their own sinister cavalcade. Gaston leads the pack on horseback, while Captain Hook, the Queen of Hearts and Bowler Hat Guy follow closely behind on foot. Jafar and Maleficent share the front of a Boo-To-You float, while the Evil Queen and the Magic Mirror bring up the end. 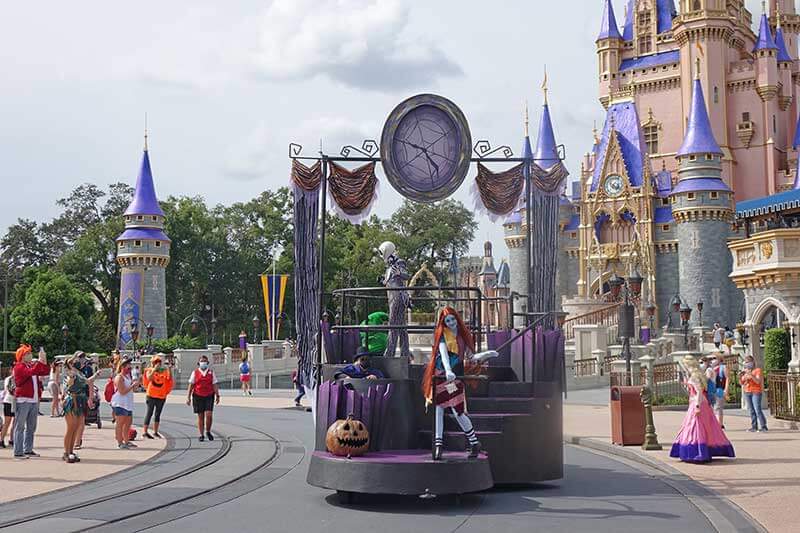 As the last Halloween-themed cavalcade, Jack Skellington, Sally and Oogie Boogie share a single float for their nightmarish procession.

For the best viewing area, we suggest finding a spot at the hub near Cinderella Castle and avoiding Main Street, particularly if it's a busier day. We felt that there was more space to maintain social distancing. Because Main Street is narrow, people tended to pack in closer together, and it was harder to stay six feet apart. Also, catch the cavalcades later in the day. The morning cavalcades drew larger crowds when people were still coming into the park and immediately stopping (a cavalcade may very likely be one of the first things you see). 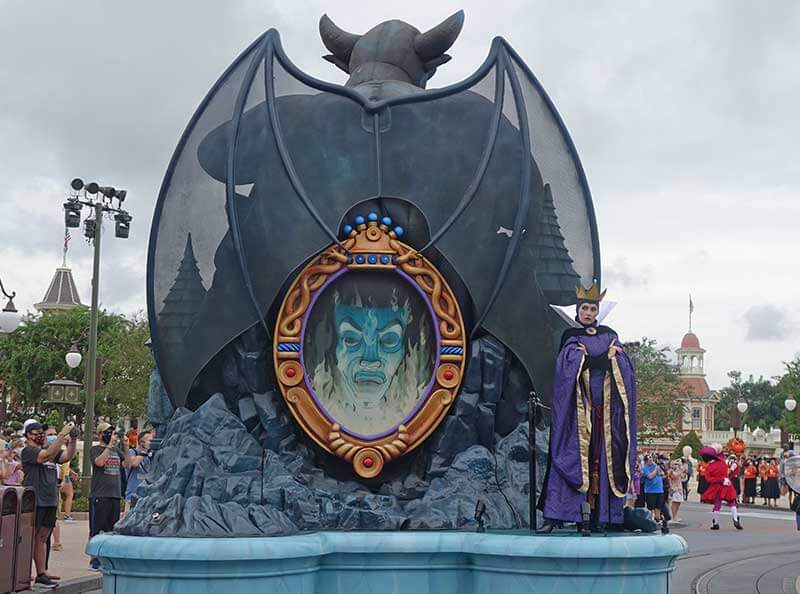 We also saw the regular cavalcades featuring the Disney princesses and the Main Street Philharmonic Band mixed in with the Halloween-themed ones. After asking several cast members, it sounded as if each day will feature a different combination of the Halloween cavalcades and the regular cavalcades. Not every single one will run in a day, so you'll never truly know exactly who will show up and surprise you. 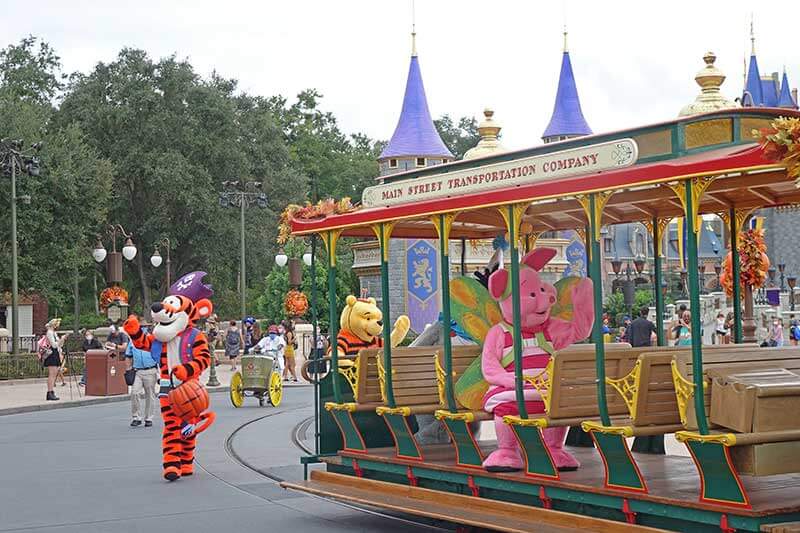 Mickey, Minnie and Pluto won’t be the only characters in costume! You might run into Chip ‘n’ Dale donning their Halloween best over in Frontierland, or spot Winnie the Pooh and friends dressed up and riding a horse-drawn trolley down Main Street, U.S.A. After their trolley ride, Winnie the Pooh, Piglet, Tigger and Eeyore may appear in front of the Crystal Palace, ready for socially distanced selfies. 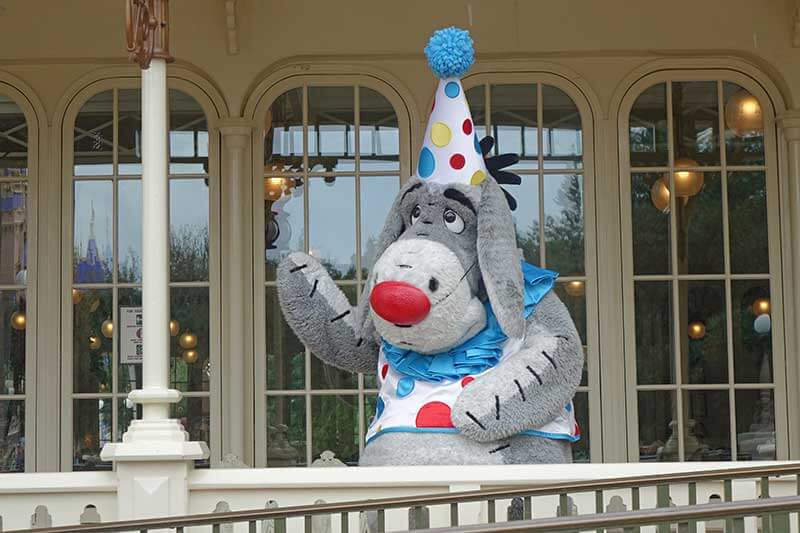 Starting Sept. 20, the Cadaver Dans (the spooky alter egos of the Dapper Dans) will emerge from their tombs to serenade guests with their enchanting a cappella performances.

Disney promises some bewitching surprises planned for this fall holiday — frogtunately, not the scary kind! Who knows exactly what’s in store for this year's Walt Disney World Halloween celebrations … but we’ve got our frog fingers crossed that the Sanderson sisters will make a special appearance eventually.

Other characters, such as Stitch and Jack Sparrow, can still be found around the park in certain locations, but they are not dressed uniquely for Halloween. 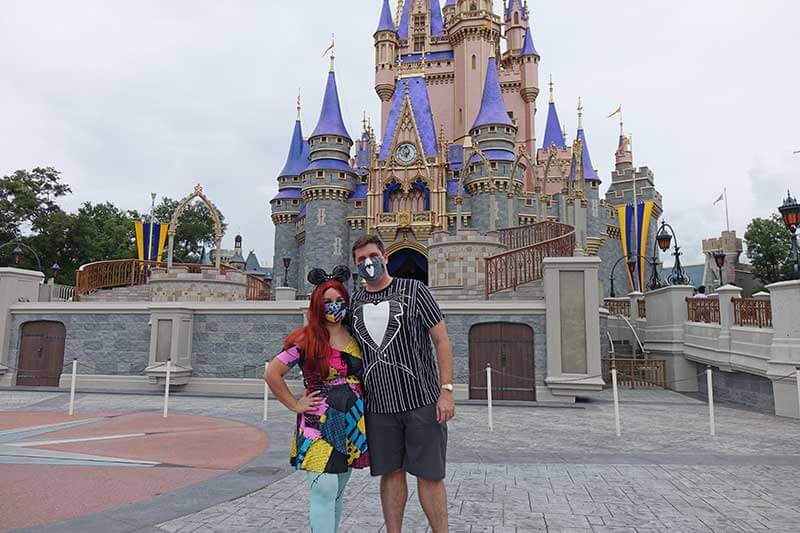 For the first time ever, guests of all ages can wear their funniest, Disney-ist or most creative costumes during regular park hours from Sept. 15 to Oct. 31. Usually in the past, we were only allowed to wear costumes during Mickey’s Not-So-Scary Halloween Party, Mickey’s Very Merry Christmas Party and Disney Villains After Hours. As a reminder, costume masks are not permitted for adults (though children younger than 14 years old may wear costume masks). However, face coverings will still be required for all guests. Before you go, be sure to read up on Magic Kingdom's current health and safety measures, as well as Disney’s costume guidelines. 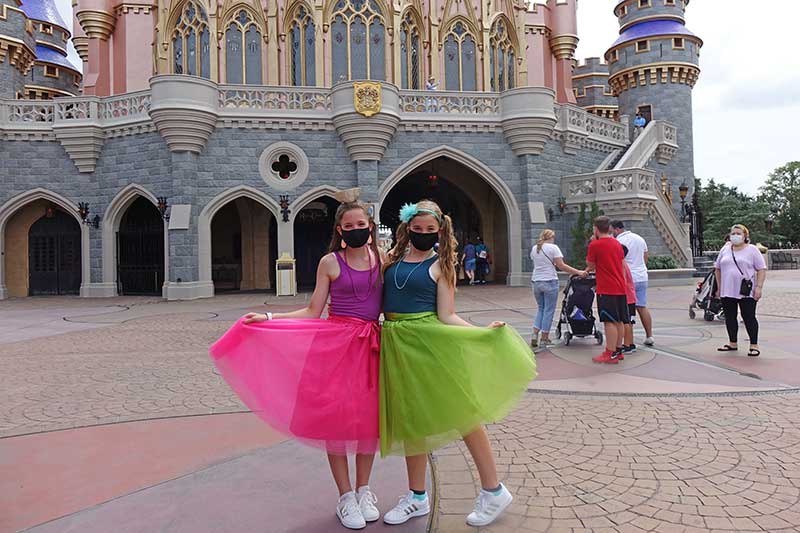 We didn't see as many people dressed up, but it was only the first day. We saw a lot of Tinker Bell twins, Buzz Lightyear doppelgängers and royal princesses. Families and friends also coordinated matching Halloween T-shirts. Did you catch Cinderella in the background on the balcony of the castle while sisters dressed as Anastasia and Drizella pose? 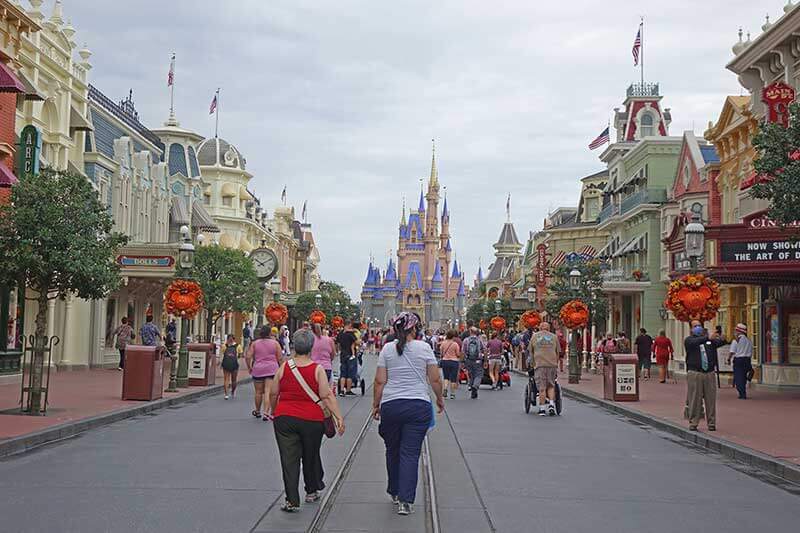 You’ll definitely spot festive Walt Disney World Halloween decor the moment you step inside the park! Mickey jack-o-lantern wreaths adorn the lamp posts near the park entrance and around Town Square, Main Street, U.S.A. and the Cinderella Castle hub areas. Like we mentioned before, we didn't see the scarecrows and garland, but we'll be sure to update if Disney continues to add more decor. 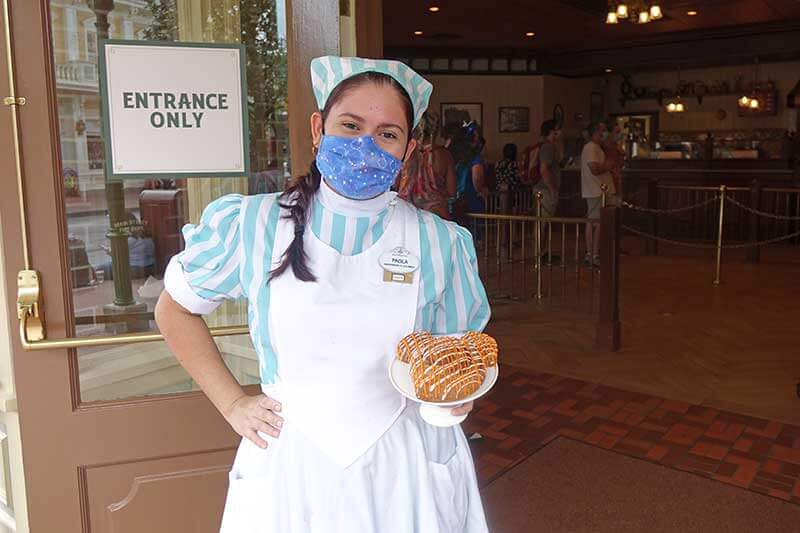 Brand-new treats, as well as some returning, fan-favorite desserts, are available at select locations around the park. Constance’s For Better or For Worse Wedding Cake was a froggy favorite from last year’s Mickey’s Not-So-Scary Halloween Party, and you’ll be able to find it again at Liberty Square Market this year. Tad has his eyes on the new Hitchhiking Ghost Premium Popcorn Bucket to add to his popcorn bucket collection, and Lily can hardly wait to have the Not So Poison Apple Cupcake again. For a full list of the scrumptious goodies and where to find them, keep reading this guide!

During our first visit, we had the Mickey Monster Mash Burger from Cosmic Ray's (which used mobile ordering) for lunch. The highlight of the burger was definitely the sriracha aïoli! We also shared the PSM, aka Pumpkin Spice Milkshake, from Auntie Gravity's Galactic Goodies. It's super sweet — just the way Tad and Lily like it. 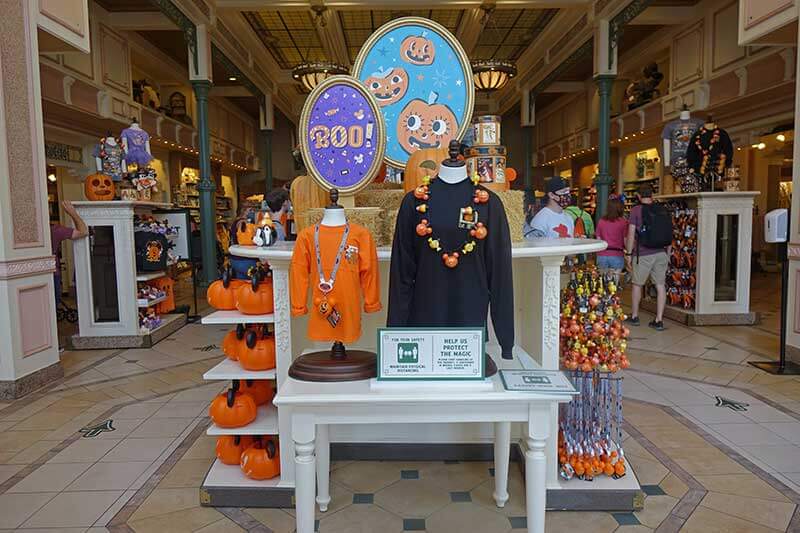 Festive Halloween-themed merchandise will be available in select locations throughout the park. Featured items include new spirit jerseys, a Loungefly backpack, candy corn-themed headbands and a special apparel collection inspired by Disney Villains!

Plan the timing of your shopping accordingly. Because the merchandise pick-up and resort delivery services are unavailable right now, we recommend waiting until just before you leave. However, there's a special caveat: Everyone has the same idea. If you're planning to stay until park close, the gift shops may be extra busy, especially the Emporium. At 5 p.m. (an hour before park close), the line to get into the Emporium stretched out all the way to Casey's Corner. However, the line does move quickly, and we ended up waiting about 10 minutes to enter. We finished our shopping at 5:30 p.m. and left while there was still a five-minute wait for the Express Monorail. Score!

Capture memories during this unique time of Halloween fun with themed photo ops. Disney PhotoPass photographers will be stationed around the park. Don't be surprised if some happy haunts photobomb your picture. 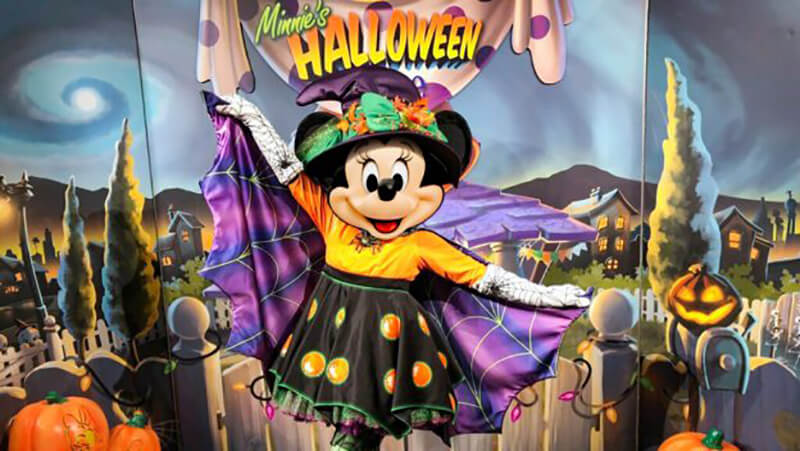 Hollywood & Vine is set to return with Minnie's Seasonal Dining, starting Sept. 25, 2020! Devour a monster feast served to your table during Minnie's Halloween Dine. While the character dining experience will be modified, you'll still be able to spot Minnie, Mickey and their friends in their Halloween best. Minnie will be dressed as a happy witch, alongside Mickey as a vampire, Goofy as a spooky cowboy and Pluto with a cute Halloween collar. ADORBS. Get ready for a boo-tastic time with Halloween decor and music, scary good food and more! You can now make a reservation online or through the My Disney Experience app.

Halloween merchandise is already available at Mickey's of Hollywood.

Trick or treat! Disney’s certainly giving us something — more like A LOT of things — good to eat this year. Disney Parks Blog released an entire Foodie Guide dedicated to all of the special Halloween treats that you won’t want to miss. All four parks will offer an assortment of yummy food and drinks, featuring cinnamon, pumpkin spice and apple flavors. These fall treats are now available, unless otherwise specified! 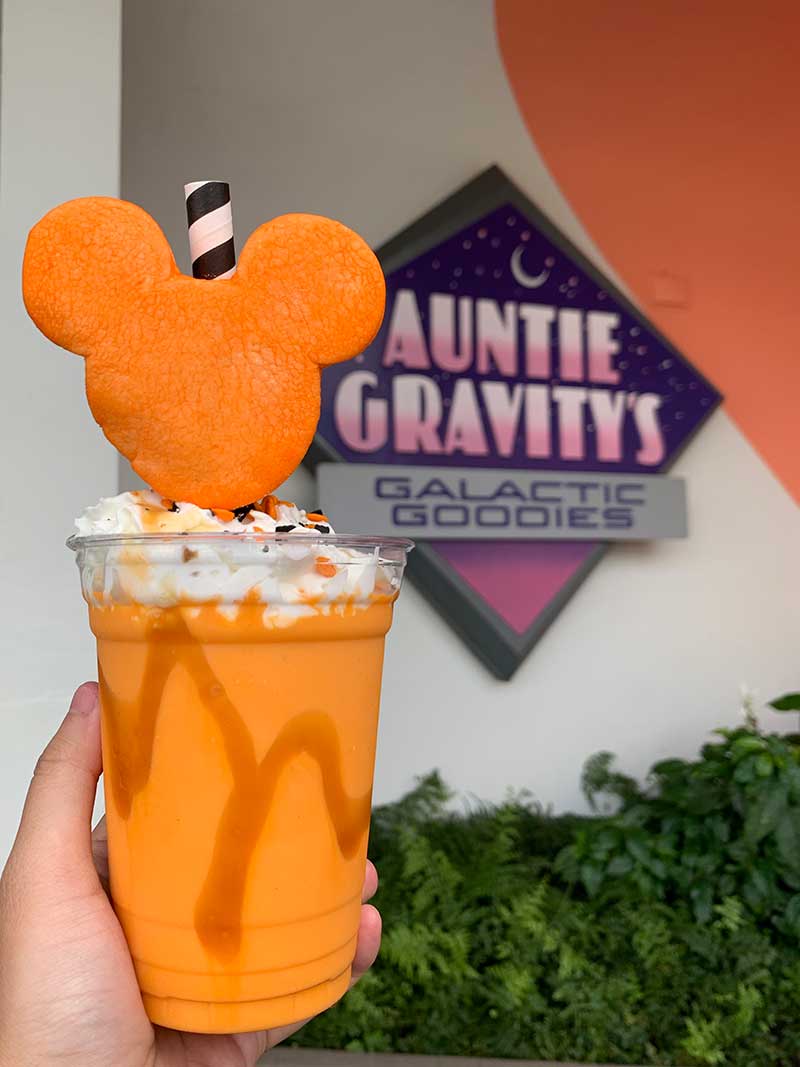 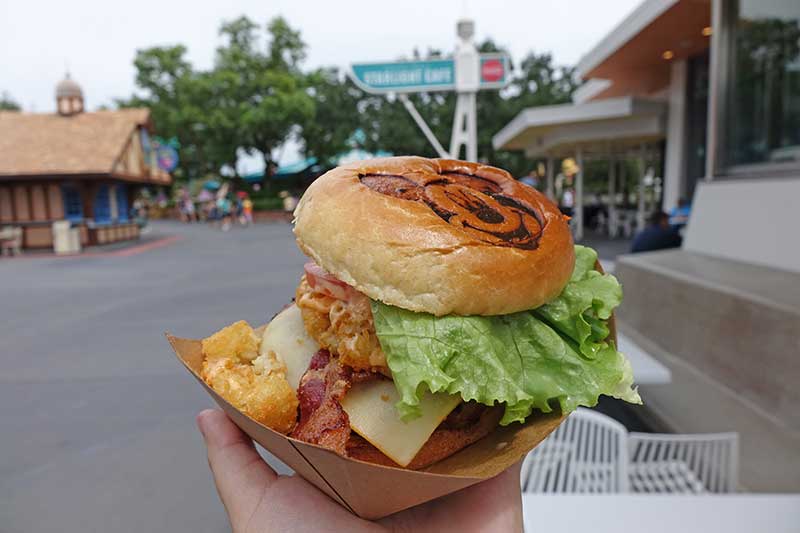 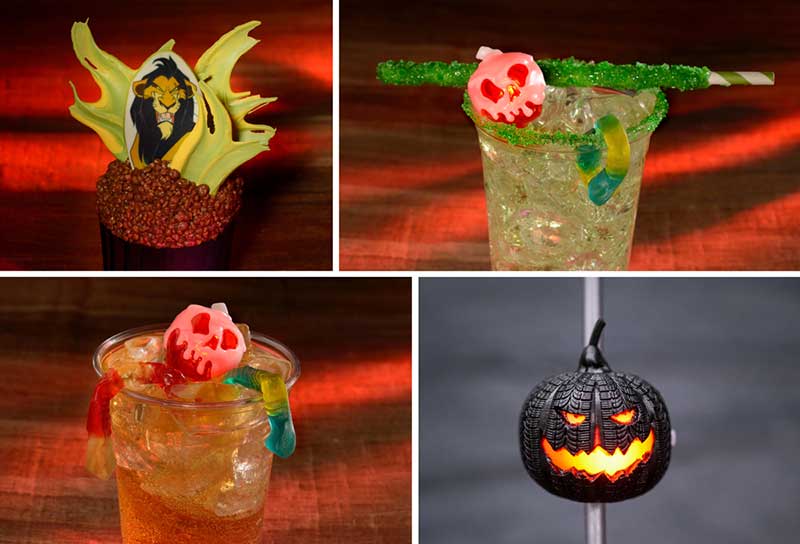 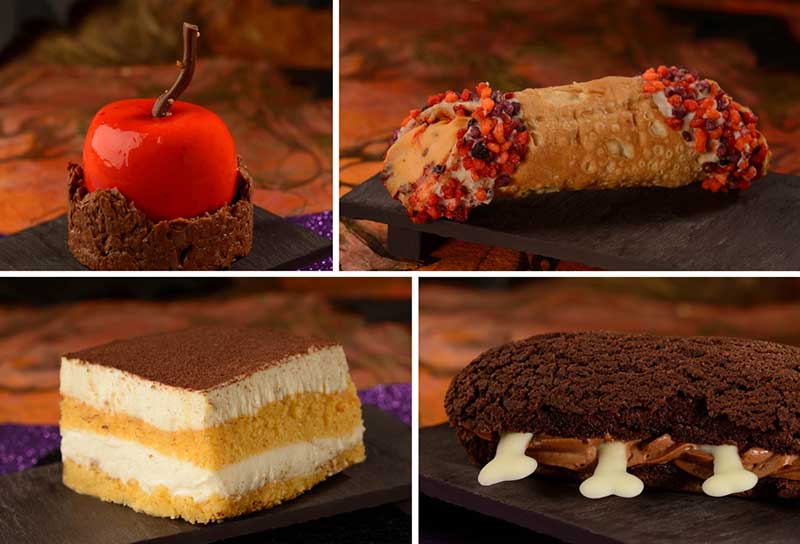 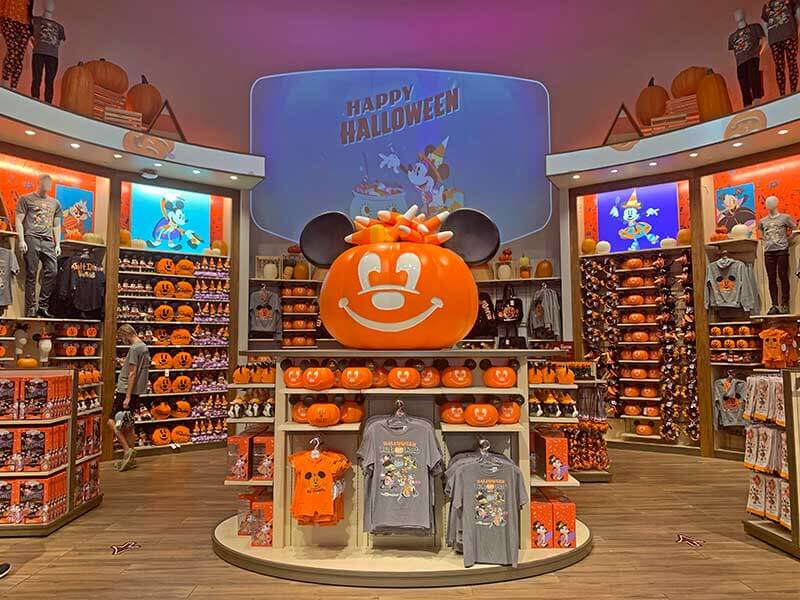 If you're headed to Disney Springs during your fall trip, take the opportunity to find the perfect Disney-themed costume! In need of some inspo? Stop by DisneyStyle, Star Wars Galactic Outpost, Super Hero Headquarters, The Dress Shop at Marketplace Co-Op or World of Disney. Please note that Disney Springs will not host trick-or-treating this Halloween season. You may also pick up Halloween merch inside the gift shops at the Walt Disney World Resort hotels as well.

Disney released a fall foodie guide for Disney Springs and the resort hotels, so you can find all of the devilishly delicious desserts and drinks. Here's a list of the locations with fall offerings:

What are you most excited for during this upcoming fall at Walt Disney World? Share your costume ideas with us in the comments below!

SAVE $32 vs Adult gate price