How to Get Your Disney World Character Fix Right Now 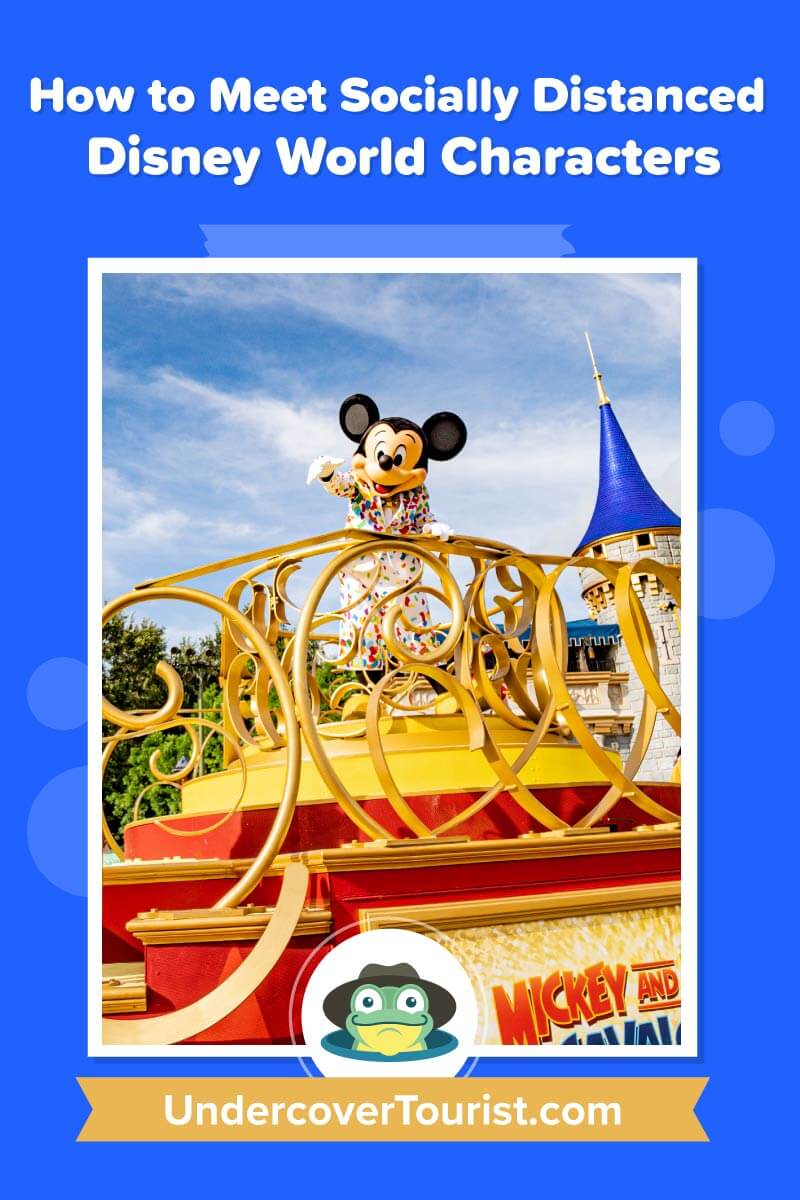 Trips to Disney World are known for being toadally magical, in large part due to the characters that spread a little pixie dust wherever they go. When Disney World reopened and we heard that character meet and greets would be unavailable, we were disappointed but understanding. But guess what? The all-new character experiences around the parks that have replaced the traditional meet-and-greet are just as special! And even better? Starting sometime this November, individual greetings will come back (but still without hugs or autographs).

Disney World's brand-new character experiences are unlike anything before! Each park offers unique ways to see the characters in action, and we love the spontaneity of the sightings. Just because you can't hug them doesn’t mean the interactions are impersonal. Sure, the experiences hoppen more quickly, but tell that to Aladdin who looked directly into my eyes and asked, “Do you trust me?” from the balcony of the train station, or the evil stepsisters who made fun of our matching T-shirts from Cinderella Castle. It’s fun to see a mix of characters who would not usually interact with each other … Aladdin and Mary Poppins are new #friendshipgoals. Many of the cavalcades, motorcades, flotillas and outdoor pop-up experiences will continue to hoppen, even when the indoor greetings return.

Here’s everything you need to know about seeing Disney World characters, including tips on where and how to spot them right now. 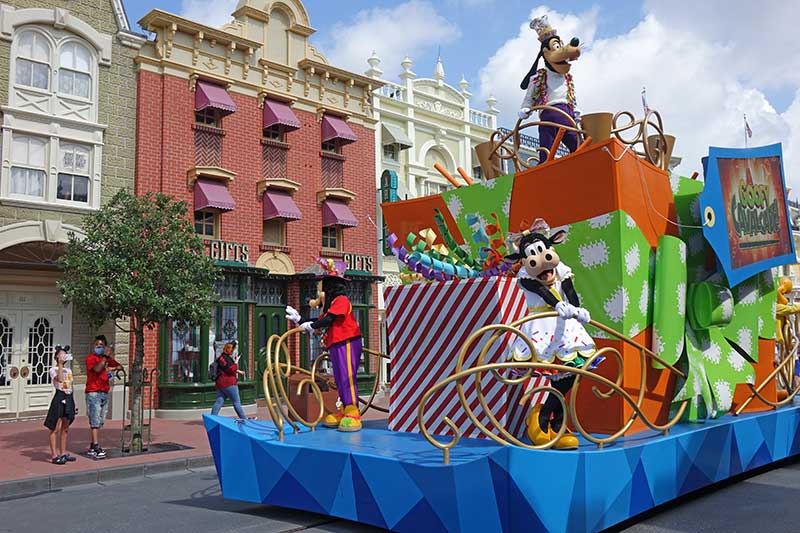 Instead of traditional character greetings and grand parades, your favorite Disney pals continue to march down Magic Kingdom’s Main Street in mini cavalcades. Disney World characters also strut their stuff along Hollywood Boulevard at Disney’s Hollywood Studios and cruise down the Discovery River at Disney’s Animal Kingdom. While these used to appear at random times to prevent crowds from forming, the My Disney Experience app now tells you the exact times when each cavalcade will appear.

We love that Disney is keeping us on our toes by surprising us with pop-up character appearances around the parks. These characters safely greet guests from afar in select locations, such as atop Cinderella Castle or while frolicking around the Imagination Pavilion’s gardens. At most locations, PhotoPass photographers aren’t available, so you’ll need to practice your best selfie skills.

Some character dining locations remain temporarily unavailable, but several restaurants have modified character dining experiences. The characters still roam around the restaurant but stay a safe distance from guests. For instance, at Garden Grill, we sat on the lower level of tables while Mickey, Pluto and Chip ‘n’ Dale walked along the upper level. They all stopped briefly for photos at each table. At the end of the meal, we received a special card with their autographs.

While some shows still remain temporarily closed around Disney World, there have been several fan-favorites that have returned, such as the Festival of the Lion King at Disney's Animal Kingdom, or will be returning soon, such as Indiana Jones Epic Stunt Spectacular at Disney's Hollywood Studios (reopens Dec. 19, 2021).

Where to Find Disney World Characters by Theme Park 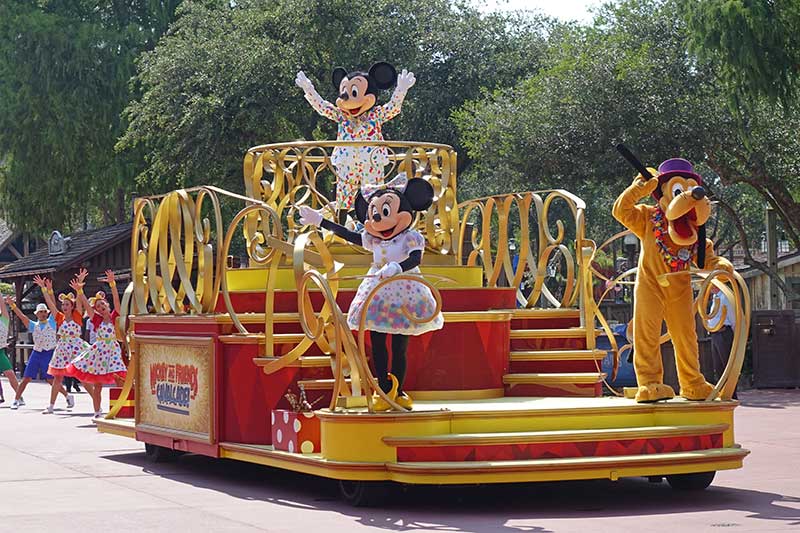 If your motto is “the more, the merrier!” Magic Kingdom is the place to be. We spotted so many characters who appeared in the cavalcades and popped up around the park when we least expected it.

Magic Kingdom has six different cavalcades that rotate throughout the day:

Each cavalcade moves along the normal parade route, beginning in Frontierland and ending at Town Square. If you wait in Town Square after the conclusion of a cavalcade, select characters may appear above the crowd at the Walt Disney World Railroad train station. We’ve seen the princesses, Mickey and his friends and the Magic Kingdom cavalcade characters wave to guests below. Some characters even chatted amongst themselves and exchanged witty remarks with guests. Gaston sure does love to show off his muscles … 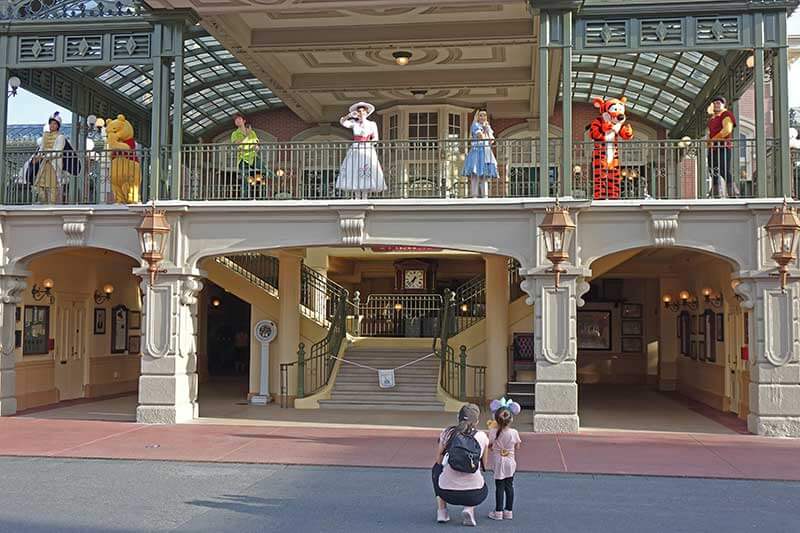 While not considered its own cavalcade, Winnie the Pooh, Tigger, Eeyore, Rabbit and Piglet travel in a trolley down Main Street, circle around the Cinderella Castle hub and end up back in Town Square. 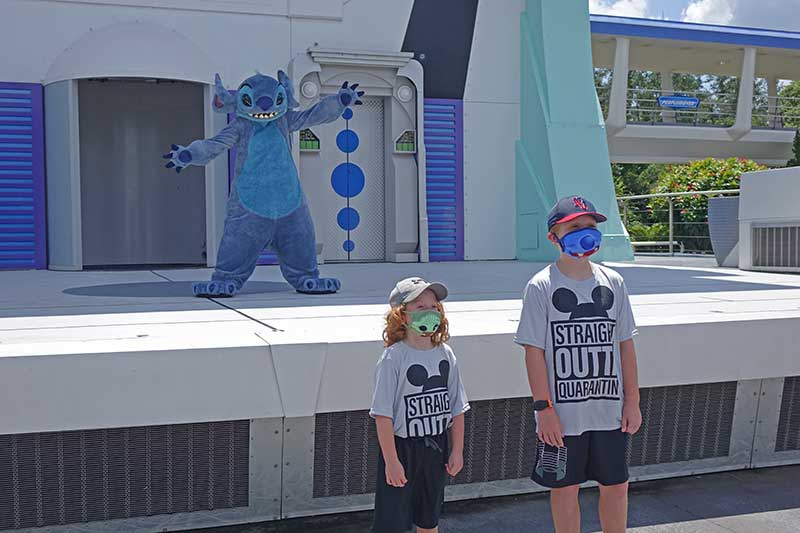 Over in Tomorrowland, Buzz Lightyear and Stitch sporadically take turns standing on top of the Rockettower Plaza Stage. Stitch posed for a photo as he played his air guitar for us! The Country Bears wave hello from the balcony of the Country Bear Jamboree theater, and Jack Sparrow may be seen hiding out in Adventureland. Anastasia and Drizella, the evil stepsisters, bicker at each other and banter with guests from above on the backside of Cinderella Castle.

If you’re a "Beauty and the Beast" fan, catch Belle in her blue dress at the Enchanted Tales with Belle attraction (Note: the attraction itself is unavailable). We saw her hanging out in the queue, away from the main pathway where guests remain. If you’re lucky enough to snag a reservation or catch walk-in availability at Be Our Guest, the Beast still formally greets each of the dining rooms, now during lunch and dinner. 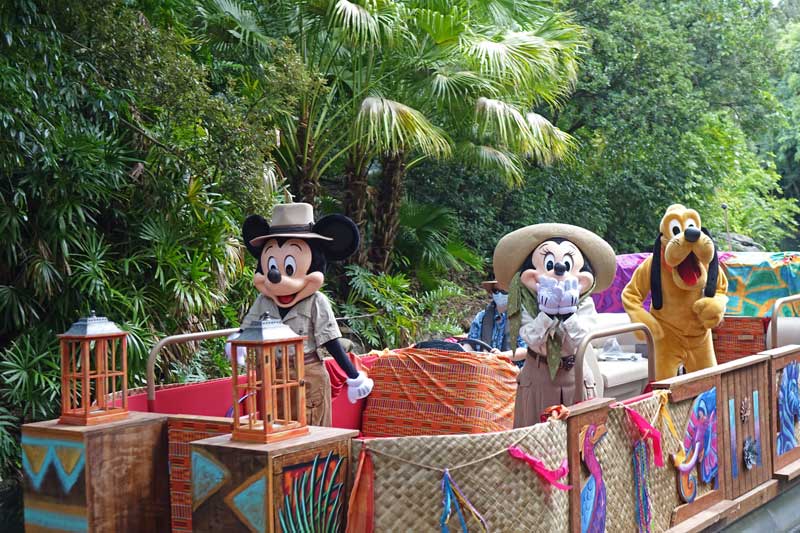 Unlike the other parks where characters travel on land, the characters float around Discovery River on boats. Due to the size of the boats, each one usually features a pair or trio of Disney World characters.

Animal Kingdom has four different boat cruises that rotate throughout the day:

The boats circle around Discovery Island one by one, moving in a clockwise direction. In most spots around the park, you can only see one boat pass by at a time. However, if you stand on the bridge between Expedition Everest and the Finding Nemo - The Musical theater, you may see one boat going out to begin its trip around Discovery Island and another returning from its voyage. The bridge is high, so it may be harder to see the characters, but you can see them for a longer period of time as they come down the river toward you. If you want to get closer to the characters, our other favorite viewing spot is the long boardwalk bridge that connects Pandora to the Port of Harambe. That bridge gets low and close to the water’s edge — plus, it’s not super crowded! 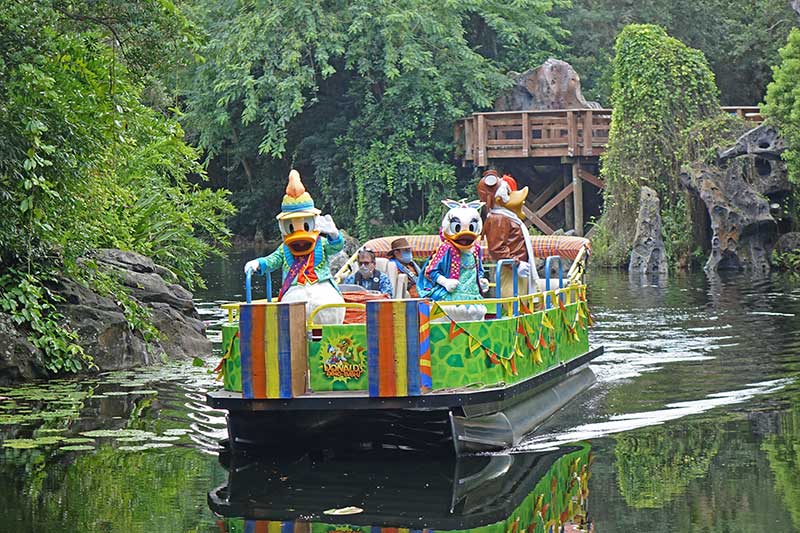 The boat cruises go by just a tad faster than the cavalcades, promenades and motorcades, so have your camera ready. (You’ll know one’s coming if you can hear the music blasting from the boat.) Because you’re not always close to the boat depending on where you see it, it can be harder to get that selfie with them.

Easiest to Spot the Characters: EPCOT

I’ve always loved the meet-and-greets at EPCOT because you’d be able to meet some of the characters in their home countries (around World Showcase, that is!) ... Mulan in China, Anna and Elsa in Norway, Mary Poppins in the U.K. While initially some characters traveled around the world in special promenades, they're back at their respective countries, greeting guests from afar! Also, Joy and Winnie the Pooh take turns catching butterflies and skipping through the gardens at the Imagination pavilion. Mickey and Minnie appear at the main entrance by Spaceship Earth.

Garden Grill is one of the character dining locations offering a modified experience. Mickey, Pluto and Chip ‘n’ Dale make their rounds around the restaurant, physically separated by the lower and upper levels of tables. They stop briefly for photos at each table. It’s hard to see them coming, but a character attendant lets you know when they’re passing by.

Following Magic Kingdom, Hollywood Studios has quite an ensemble of Disney World characters. All of the motorcades are super fun and high-energy! The cars have fun designs (we wish we could take a spin in Buzz Lightyear’s ride), and the music makes you want to dance.

Disney's Hollywood Studios has two different motorcades that rotate throughout the day:

The motorcades begin near the park entrance, travel down Hollywood Boulevard and end over by the Jedi Training Academy stage. Green Army Soldiers help out by marching to the beat of their drums. It’s best to watch the Mickey & Friends motorcade in front of the Chinese Theater, while you listen to the theme song of their new ride as they pass by it. 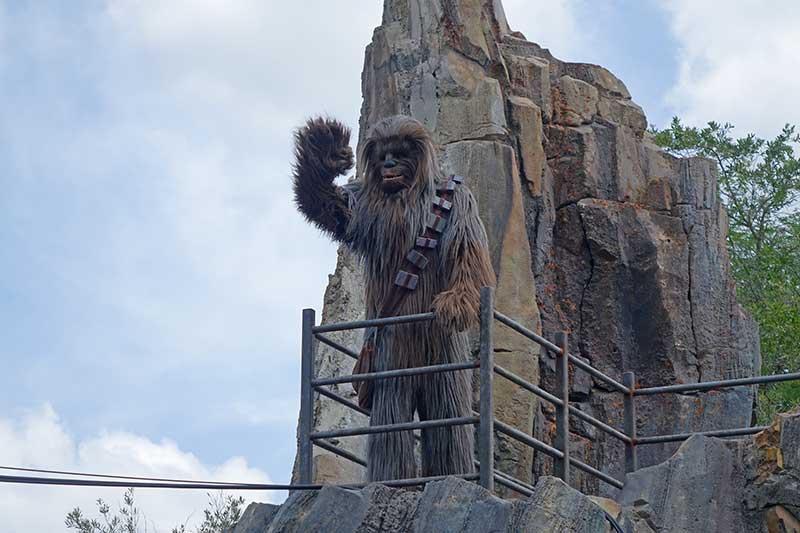 Traveling to Batuu? You’ll still be able to see your favorite Resistance and First Order characters. They may not be roaming around Black Spire Outpost as usual, but both sides are still actively taking recruits to join their causes. Chewbacca, Rey and Vi Moradi are hiding out by the speeder garage across from Droid Depot, while Kylo Ren and his stormtroopers interrogate Batuu citizens and intergalactic travelers by the First Order’s TIE Echelon (across from the Milk Stand).

Chip 'n' Dale sometimes have a picnic in the grassy area next to the Hollywood Brown Derby. Others have also spotted Mickey, Minnie, Donald and Daisy on the balcony right by the stroller rental location.

Tips for Getting Your Disney World Character Fix 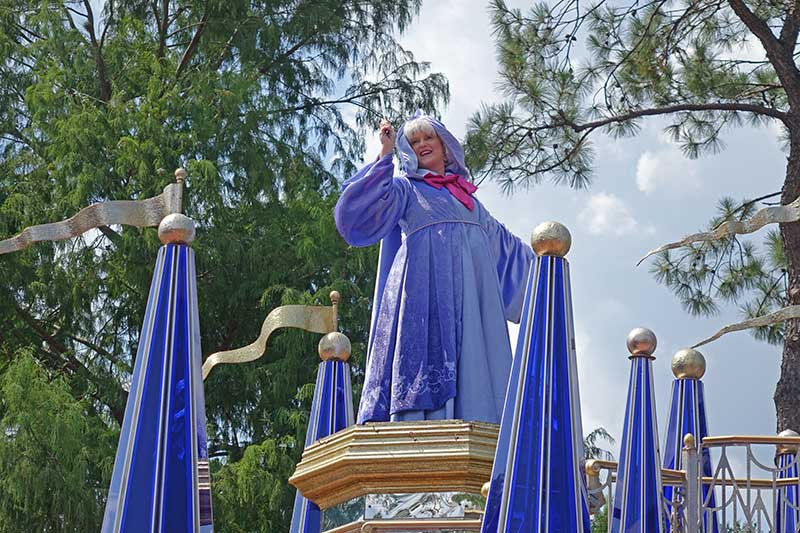 Are you loving these new Disney World character experiences as much as we are?! Who are you most excited to see once again? Let us know if you have any questions — or see any characters we haven't spotted yet — in the comments below!