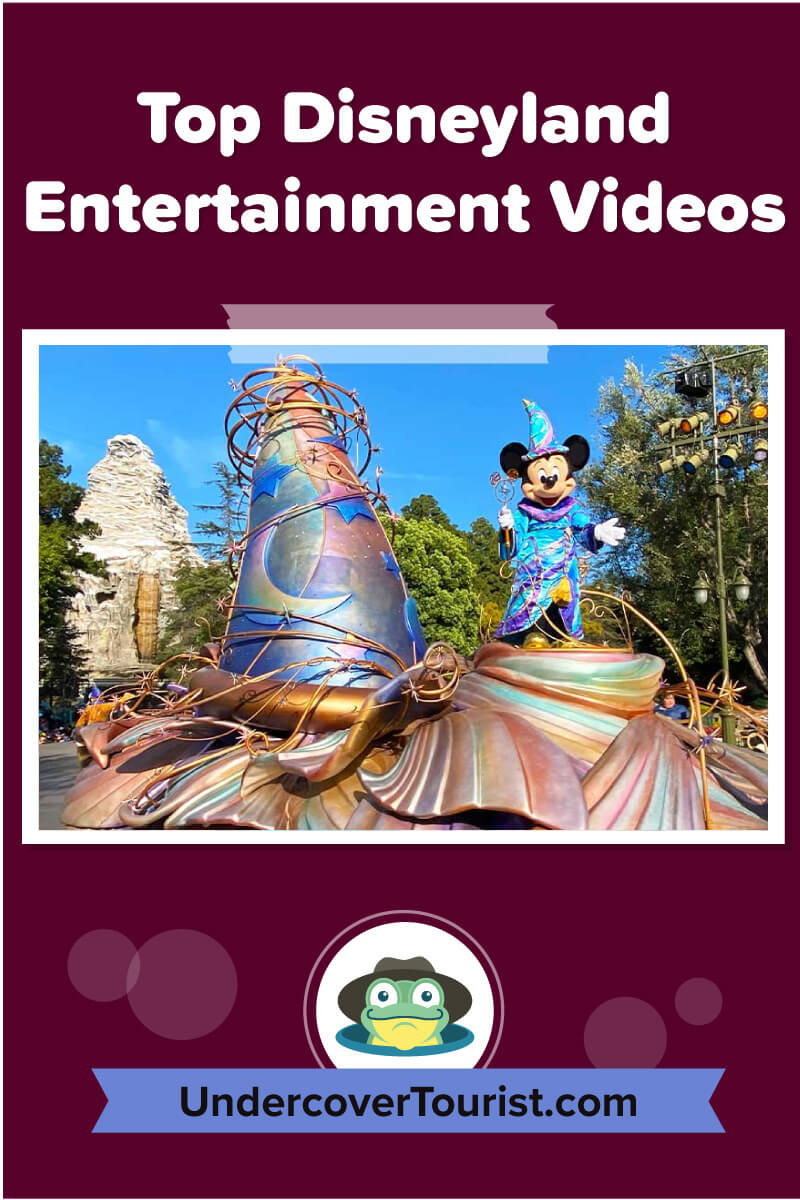 'Sup? Tad here, family videographer and a huge Disney fan. When I am missing Disneyland, nothing can lift my spirits like watching some of our top Disneyland entertainment videos on the Undercover Tourist YouTube channel. We have videos of almost every show and parade at Disneyland Park and Disney California Adventure Park (as well as many other theme parks). It doesn’t matter if the parade or show is brand-new or an old show, or even a parade that is no longer running. When I hear that music starting up, I get so excited and experience that joy all over again. Hop along with me as I take you through my top 10 Disneyland entertainment videos!

What’s fun about Disneyland entertainment videos is that they preserve Disney history. Even if my all-time favorite nighttime parade, Paint the Night, or Mommy Frog’s other favorites, the Main Street Electrical Parade and Disneyland Forever fireworks show, are no longer in the parks, with a click of the mouse we can experience it all over again. Mommy Frog cries every time she watches her favorites, but she swears it lifts her mood. What can I say? Watching videos is one way that we frogs keep the Disneyland magic alive when we cannot visit the parks.

It’s so hard to pick our top 10 Disneyland entertainment videos. Remember, if you want to see more, you can always subscribe to the Undercover Tourist YouTube channel and search our uploads, playlists and resorts for both new and old entertainment and ride videos for Disneyland, Disney World, Universal, SeaWorld, Legoland and more! You can even check out some hotels to plan for a future trip!

Let's hop to it and explore some of our top Disneyland entertainment videos!

Here’s our newest Disneyland entertainment video, the brand-new Magic Happens Parade. I get toadally excited just seeing the enthusiasm of the dancers in this parade. Lily loves seeing her favorite characters. The colorful costumes and floats set to a hip hoppin' musical score magically take you to a hoppy place.

Put your hands up, ’cause the night is young!

Kick your heels up when you join the fun.

As the magic sets us all aglow,

I gotta know, my friends,

When can we do this again?

I never want this to end!

The upbeat music from this parade can have me singing for days! Luckily, this favorite nighttime parade never has to end thanks to video. Whenever we are missing Disneyland, we just start up this Paint the Night video and the music lifts our mood. This parade debuted for Disneyland’s 60th anniversary Diamond Celebration in 2015–2016. Then, it returned in 2018 — but at Disney California Adventure — for Pixar Fest. Later that season, the Incredibles float joined the lineup. Paint the Night may be gone for now, but we remain hopful that we can do this again!

We bring you the original nighttime parade. This "spectacular festival of lights in nighttime magic and imagination in thousands of sparking lights" inspired the modern Paint the Night parade (with its 1.5 million LED lights). The nostalgic Main Street Electrical Parade will surely take you back to your own childhood. It is no longer running, but hopfully it returns again someday. We enjoyed its return in both 2017 and 2019. Until then, enjoy this video!

This Fantasyand Theatre show features performances from rare characters such as King Louie, Pocahontas, Mulan, Stitch and others.

Hop into the Fantasy Faire Royal Theatre for one of two daily show options. Storytellers Mr. Smythe and Mr. Jones weave a tale as old of time and happily ever after with help from Belle and Rapunzel in retelling "Beauty and the Beast" and "Tangled." The 22-minute, tadpole-friendly shows are full of slapstick humor and made for short attention spans. You get a bonus video since I cannot decide which story I like better! Which is your favorite?

Here’s a bonus video of one of my all-time favorites, Halloween Screams.

Thanks to video, we can enjoy this exciting Halloween fireworks show any day of the year! Join the Master of Scaremonies, Jack Skellington, in this fireworks video with a closeup on the castle. I toadally like being up close for this show.

Your little tadpoles can get ready to spin and dance around to the 2017 version of this Hollywood Land show, featuring Mickey, Minnie, Sofia the First, Doc McStuffins and Timon.

Did you know that your theme park ticket includes admission to a Broadway-like production? The Frozen show is a great way to cool off and "let it go" as you are whisked off on a magical adventure to Arendelle.

The world is a carousel of color and you can experience it in magical fountains with music and projection. World of Color is certainly my favorite ending to a day at Disney California Adventure, and the holiday version World of Color: Season of Light is electrifyingly cool. Be sure to check that one out too!

Step into the imagination of Mickey Mouse in this nighttime spectacular with live characters, projection, special effects, fountains of water and even a fire-breathing dragon! See the Disney characters take the stage at the end. If you plan to see the show in person, know that normally, the Disney characters wave from the Mark Twain Riverboat at the end, but the boat was under refurbishment when I most recently recorded. However, if you’ve seen the show before, here’s a chance to experience something new! If you must see the ship, you can find it in older videos I've shot of this must-see show. Here are some Disneyland Fantasmic tips for getting a hoppin' good view on your next visit.

I hope you had fun on your virtual tour of some of our favorite Top 10 Disneyland entertainment videos. If you are looking for more, hop around our YouTube channel for more entertaining shots of the “Hoppiest” Place on Earth. Please let us know your favorite video in the comments below. If there are any videos you would like to see in the future, please let us know that too!

Related: All of the Magical Details of Disneyland's "Magic Happens" Parade