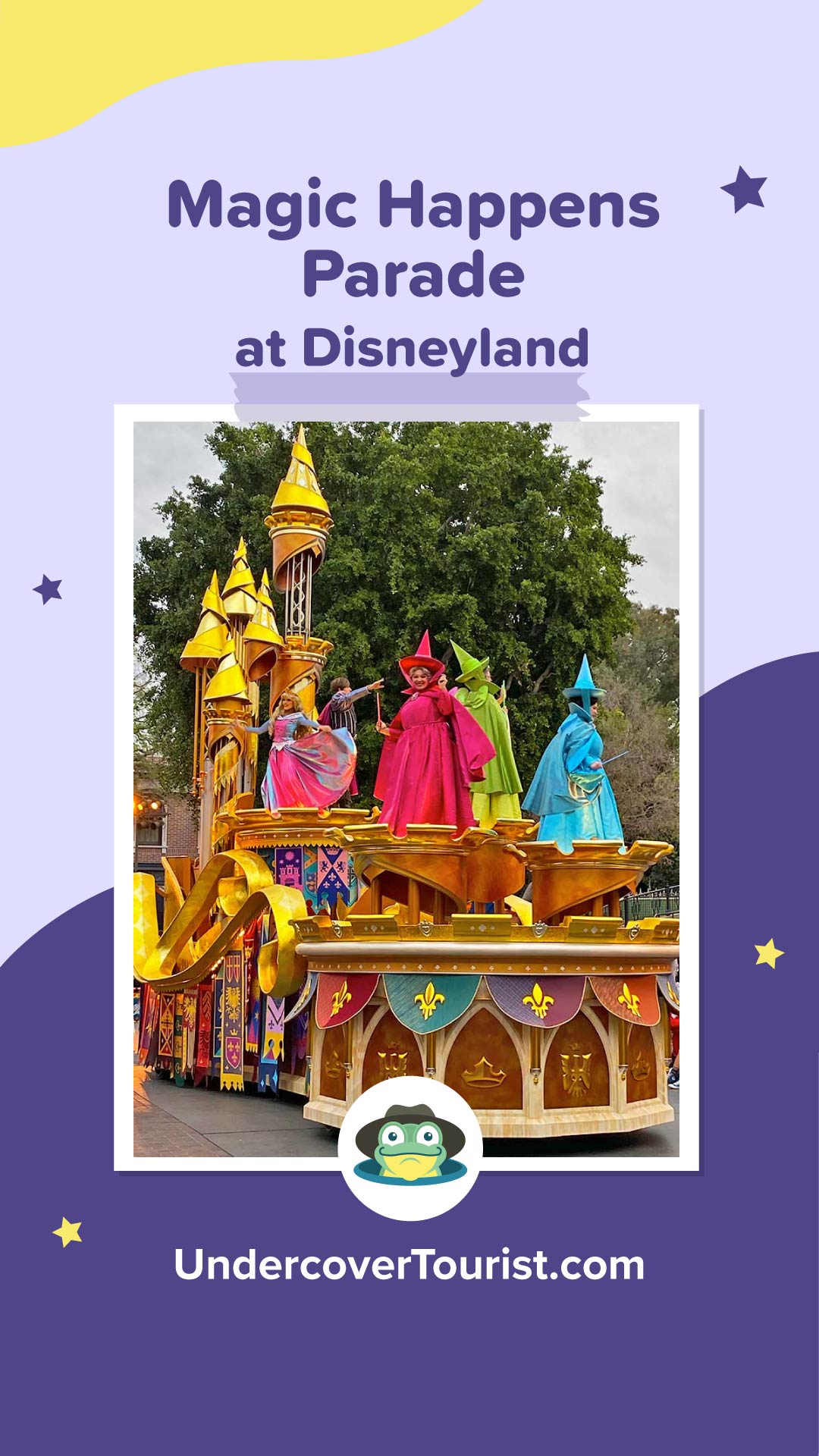 Our Frog Family digs Disney magic. We get chills from watching fireworks, Fantasmic! and World of Color. Disneyland is truly one of the most magical places on Earth! Then, our hearts flutter over all of the magical moments in Disney movies when we watch as a family. You know those kinds of moments: A fairy godmother appears and waves her wand to turn rags into a sparkling gown and mice into coachmen. So you can understand our excitement about the Disneyland parade, "Magic Happens," which showcases some of those magical Disney moments in real life! "Magic Happens" had a limited debut in 2020, but it's coming back for more magical moments, starting Feb. 24, 2023!

This colorful daytime parade was the first new daytime parade in nearly a decade! "Magic Happens" features floats and characters from many classic and modern Disney stories. There are over 90 performers in the parade, and more than two dozen of them are Disney and Pixar characters. The dancers are in colorful costumes, and their enthusiasm is magically mood-lifting!

Here’s what you need to know about "Magic Happens," including what to expect from this radiant daytime parade, where to get the best viewing location and (eventually) the full dish on dining packages and merchandise available for you to enjoy. We were hopping up and down on that parade route opening weekend so we've updated some photos for this spectacular parade. We added some to our Instagram stories @ThemeParkFrog! Tad filmed it for our YouTube channel in case you just can’t wait to see it in person.

What to Expect in the Magic Happens Parade 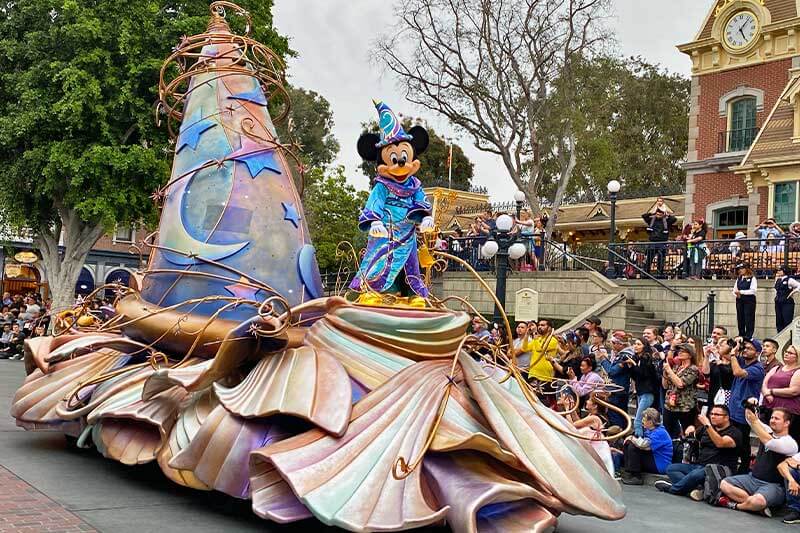 Mickey Mouse waves his magic wand from atop an iridescent float to lead the parade of dazzling floats and beautifully costumed characters. Mickey is joined by Minnie, Donald, Goofy, Pluto, Chip and Dale. The float has a 15-foot-tall sorcerer's hat (whoa!) and is set to a high-energy musical score that was co-composed by former cast member and singer/songwriter Todrick Hall, weaving in classic Disney tunes. Its hip-hop feel and upbeat tempo will have you wishing on a star and dancing along! A second song accompanies the grand finale floats. It combines musical themes from Disneyland's "Remember the Magic" parade and "Wishes" and "Remember ... Dreams Come True" fireworks spectaculars. The result is pure magic! 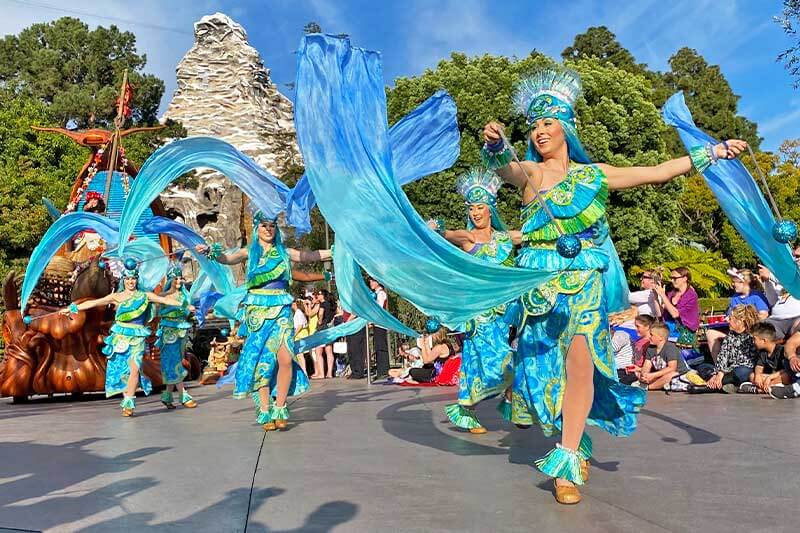 After Mickey and his pals kick off the parade, you'll be treated to many more floats and characters from various Disney movies, including some that have never been in a Disneyland parade before! 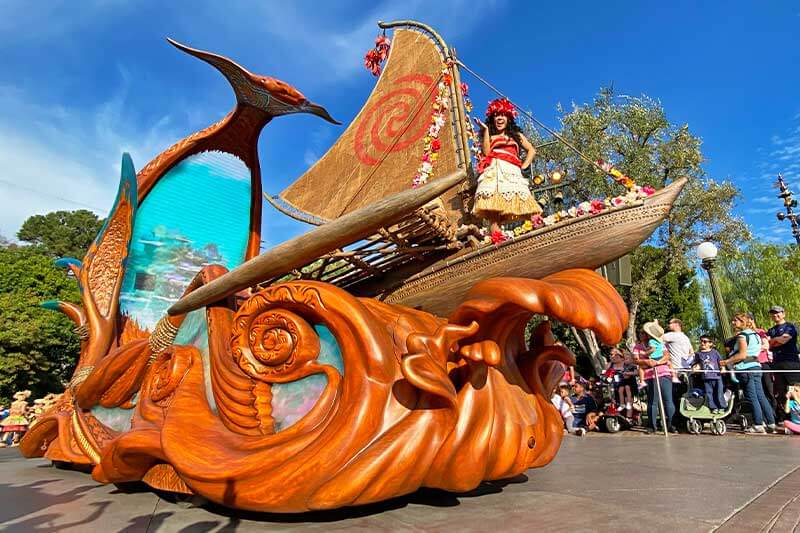 When you see the "Magic Happens" parade, you’ll get to celebrate Disney and Pixar characters in their magical moments from the following movies: 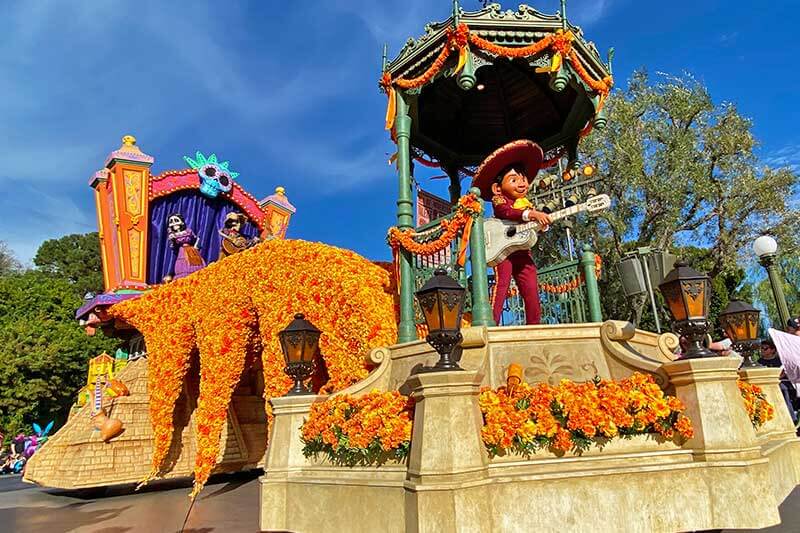 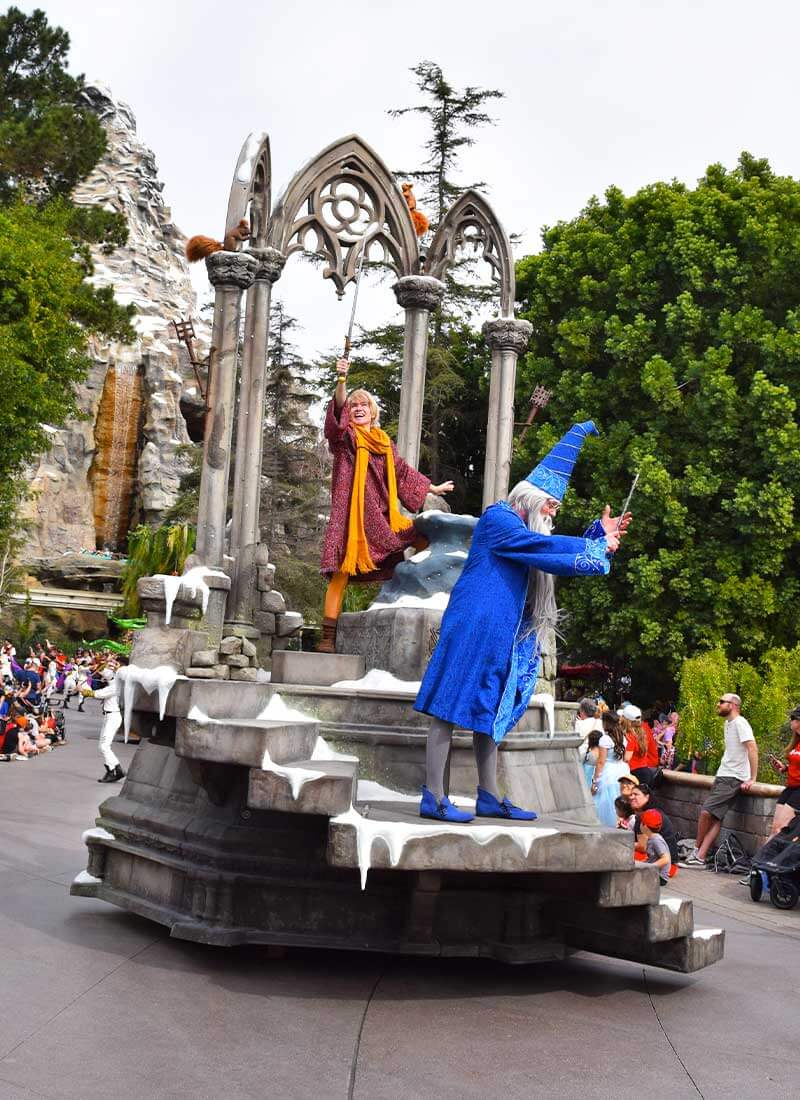 The grandest finale celebrates many magical characters and moments from classic Disney films such as "Aladdin," "Pinocchio" and "Peter Pan." The Sleeping Beauty float is joined by smaller floats depicting magical moments from "The Princess and the Frog," "Cinderella" and "The Sword in the Stone." (Is it just me, or is anyone else feeling the urge to put on Disney+ to re-watch some old Disney classics?) The following floats are part of the finale:

How to Get the Best Viewing of the Magic Happens Parade 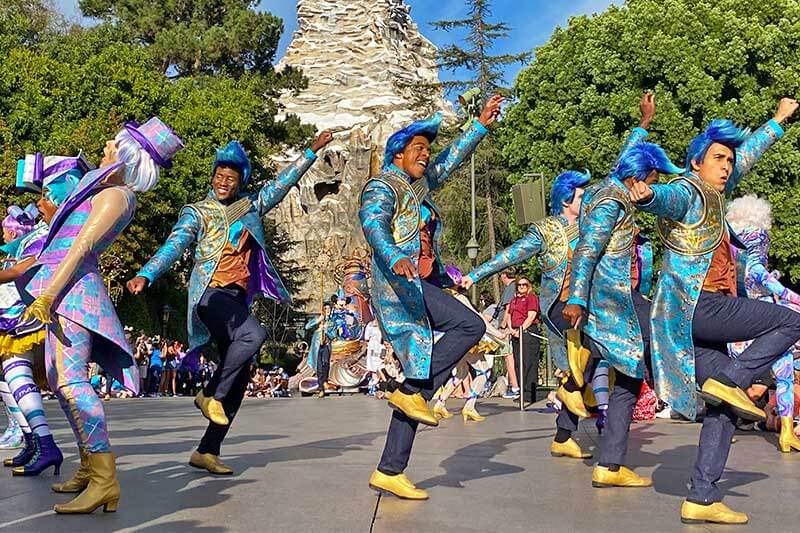 Each day has two parades. Parade times are generally 3:30 and 6:30 p.m. (but check the schedule for the day you visit!). No matter which parade you decide to catch, the ticket to good, free viewing is to invest some time. With a new parade, people will be lining the streets to get a good view, and that means getting in place a few hours early. Chances are, the longer waits will be for the first parade. We saw people starting to get in place two hours early in 2020. Keep in mind that the second parade will be in the dark, at least for a short while before the time changes. Check it out if you can because the illuminated floats look so pretty at night!

If you are viewing the second parade, you might find it easier to hop in place as soon as the first parade passes by and the first viewers leave. We like to use this waiting time as rest time. Bring snacks and take a moment to rest your aching flippers! Need some suggestions? These are our favorite Disneyland Snacks! (Is there ever a bad time for food shaped like Mickey? I didn’t think so!) If you want something more substantial, we also have some favorite on-the-go Disneyland foods. Or, you could fill up on the dining package and secure reserved viewing (see below). 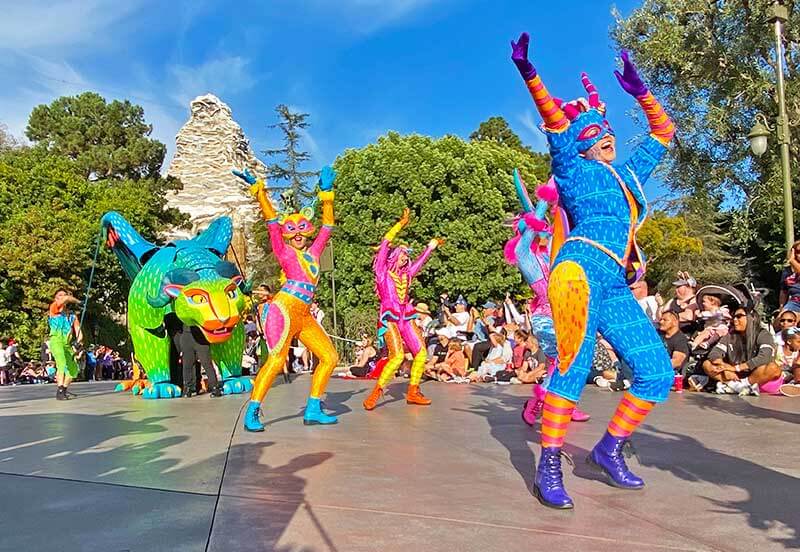 It’s important to know the direction of the parade. Why is that, you ask? Because you want the best view with the best angle without distractions. Generally, the first parade begins at “it’s a small world” and runs toward the front of the park. The second parade generally begins at the front of the park and ends at “it’s a small world.” You want to be able to see the parade coming and maybe even see it make a turn so you can see more sides of the dancers and gorgeous floats. We love being on the outside of the circle in front of the train station to see all of the intricate details of the floats as they make their way around the bends. 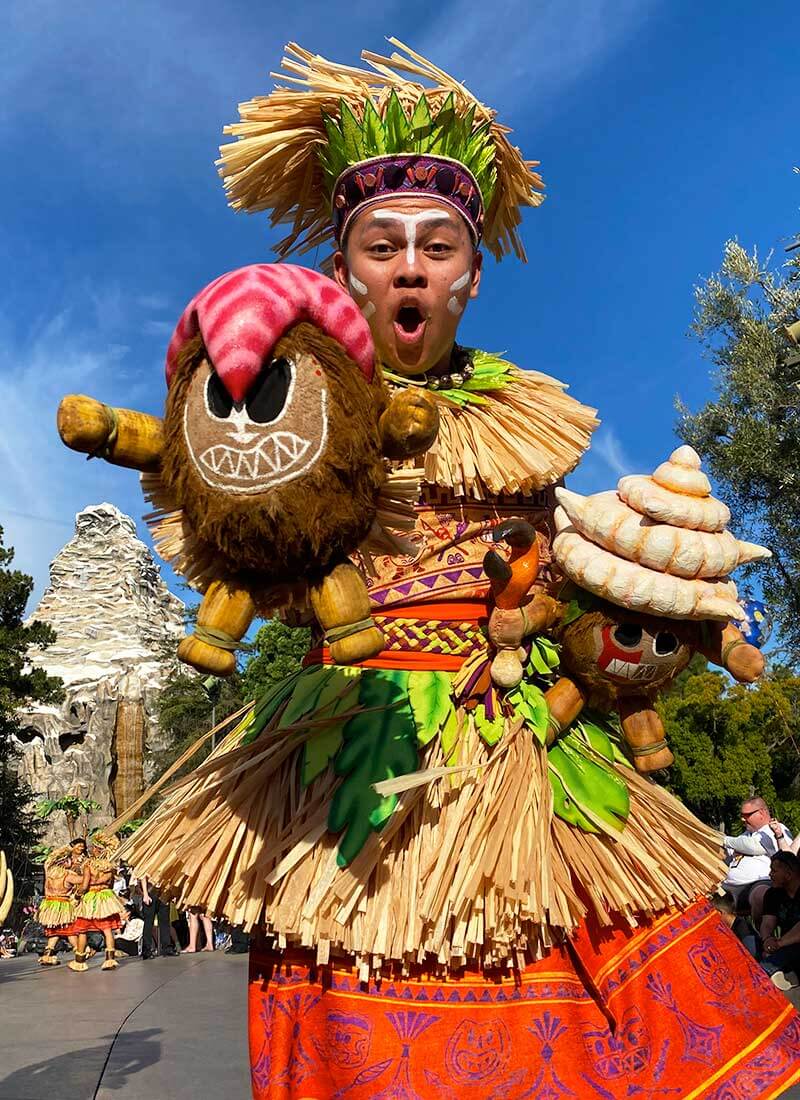 Wherever you sit, you do not want to be sitting just behind one of the main crossing areas. At intervals, cast members will let large groups of people cross the street, and if you are sitting on the ground, you’ll be missing the approaching floats. It’s so distracting from the magic! You can, however, sit just in front of these crossing areas without it affecting your experience.

It’s also good to know which direction the parade is traveling because it can help you gauge when it will appear. The parade may start at 3:30 p.m., but you might not be seeing it until about 3:50 p.m. if you are seated near its end.

The areas around Main Street, U.S.A, tend to fill in quickly, as do any benches, curbs or shady spots. If you walk toward “it’s a small world,” you might have better luck finding a spot.

If you cannot secure front-row seating, go high! This parade has tall floats and some details can be hard to see when you are seated on the ground right in front of them. You'll want to catch Dante leaping across the bridge in the Coco float and get a closer look at Sleeping Beauty's shimmering dress! There is a raised area across from “it’s a small world” with great views of the parade. We also enjoy sitting up near the train station by the park entrance. You can see the parade from above.

If you are not sure if a roped area is for sitting, ask. You do not want the disappointment of camping out for an hour, only to find out that you have to move once there are no more spaces left. But sometimes what looks like a non-viewing area is empty and just waiting for you to claim it, so ask!

Be sure to check the weather. The parades usually do not run in the rain. Let’s hope for some of that sunshine Southern California is so well-known for! Sunshine means hats, sunglasses and sunscreen for comfortable waiting and parade viewing. (That is one of the reasons people fill up the shady spots first!) A small umbrella provides shade while you wait. Put it away before the parade started so you do not block anyone's view. We always aim to be considerate of others. 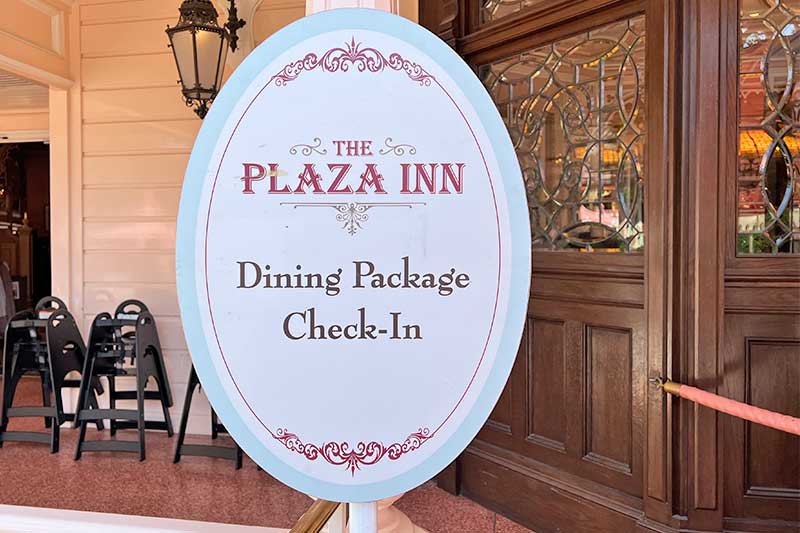 You can get a Plaza Inn Magic Happens dining package to get a reserved spot to watch the parade.

This dining package includes an adult or child meal and a voucher for reserved viewing access to the second Magic Happens Parade performance. The viewing area is usually across from the train station in Town Square, near the start of the second parade. Reserve meal pick-up between 1:00 and 3:30 p.m. Reservations are open now up to 60 days in advance.

The adult meal is $45 plus tax and includes short rib and fried chicken with pesto mashed potatoes and seasonal vegetables with a dessert and choice of fountain beverage or Dasani water. (Plant-based options are available.)

The child meal is $25 plus tax and incudes chicken tenders, mashed potatoes and seasonal vegetables with a dessert and choice of Dasani water or milk. (Plant-based options are available.)

There is so much to get excited for in 2023 with the new Magic Happens parade, the Disney 100 Years of Wonder celebration and the reopening of Toontown on March 8. Plus the Disney California Adventure Food & Wine Festival kicks off March 3. Ready to hop to Disneyland to catch all of the magical new fun? Your favorite froggy friends can help you save some green if you are in need of discount multi-day Disneyland Resort tickets and hotel bookings in the Anaheim and Los Angeles area!