A Foodie's Guide to Eating Your Way Through Pixar Pier

It’s time to stock up on hand wipes and cleanse your palate for the fabulous Pixar Pier food and treats. In case you missed it, the Paradise Pier area of Disney California Adventure was reimagined as Pixar Pier with new rides, games, and character meet and greets. You can read more about it in Our “Friendtastic” Guide to Disneyland Pixar Fest. But some of the most exciting changes come in the form of permanent dining experiences from quick bites to “themetastic” desserts to the newest table-service hot spot, the Lamplight Lounge, a California gastropub. We’ve hopped our way through Pixar Pier, tasting everything and then maybe even going back for seconds and thirds of our favorites, all in the name of research, of course. We bring you our foodie’s guide to eating at Pixar Pier. 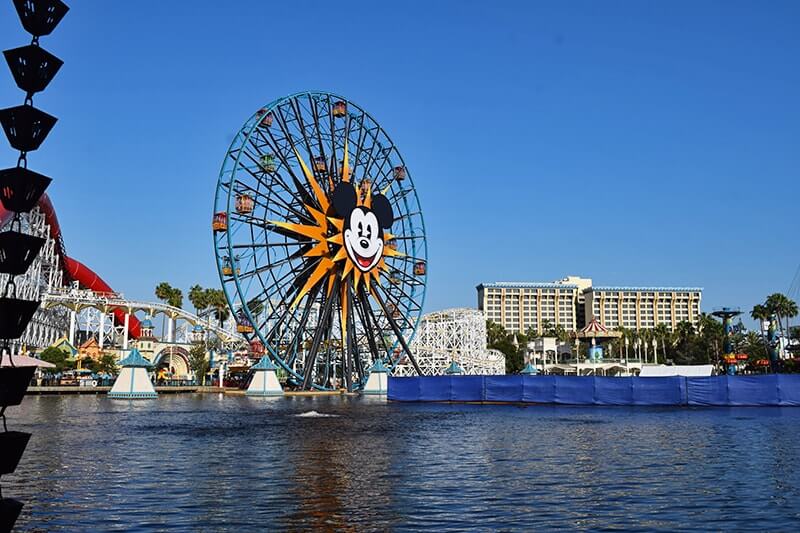 Our Foodie’s Guide to Eating At Pixar Pier

We present a neighborhood-by-neighborhood guide to eating at Pixar Pier. You’ll have to pace yourself to eat it all, perhaps hitting some neighborhoods or dining locations early in the day and coming back to other neighborhoods for another tasting experience later. Don’t worry. You’ll burn plenty of calories walking around the park all day. At least that’s what I tell myself! We also share treats with each other so we get to taste more things without getting too full.

Must Eats on the Pixar Pier Itself 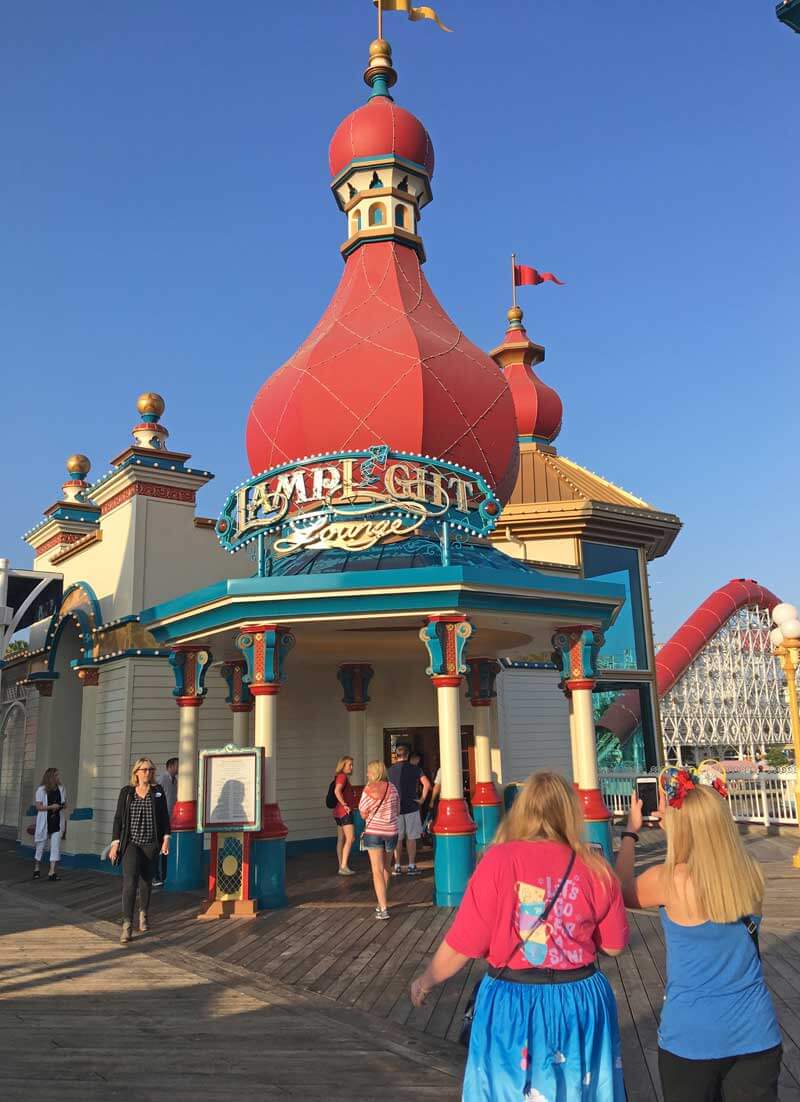 The Lamplight Lounge is a bar and restaurant that has taken over the former Cove Bar and Ariel’s Grotto to become the new artsy waterfront dining spot. Upstairs you can enjoy drinks and share mouth-watering Bites (so-called “Shorts” to Share) like Crispy Piggy Wings (they are delicious) the famous Lobster Nachos (a fan favorite that remains from the Cove Bar), Tuna Poke, Deviled Eggs and Toast, Crab and Tuna Roll, Carne Asada Rolls (for when you want sushi but consider fish to be friends, not food) and Potato Skins. You can sit at the bar or at a table along the water.

The downstairs full restaurant offers both the upstairs Bites along with Bigger Bites at cozy open-air indoor or outdoor seating (some seats surround fire tables, others are themed booths or comfy armchairs with low tables) as well as bar seating. The Bigger Bites you can sink your teeth into include Ratatouille, Spinach Salad, Chicken Sandwich, Salmon PLT (grilled salmon with pancetta, romaine, roasted plum tomato, lemon-bacon aioli, on focaccia), Grilled Chicken Salad and Cheddar Burger. If you have left room for dessert, go for the warm donuts with dipping sauces. The small fries in your party can dine on Chicken, Pasta, a PB and J Roll or Burger Slider. 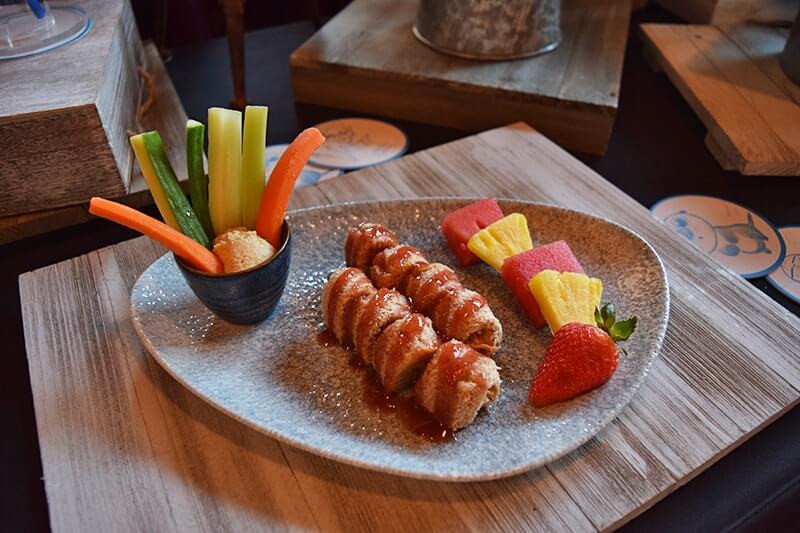 There are a lot of fun non-alcoholic beverages for all party members both upstairs and downstairs like the must-try Infinity Fizz with cherry pearls that move about your drink or the Falling with Style and Goofball Island. Adults may enjoy partaking in the draft beers, wines and themed cocktails that hint at Pixar and movie moments. With names like The Sequel (it’s fizzing with dry ice), Plot Twist, Scream Canister and Over Budget, you can go over budget trying them all. They all sound so good! 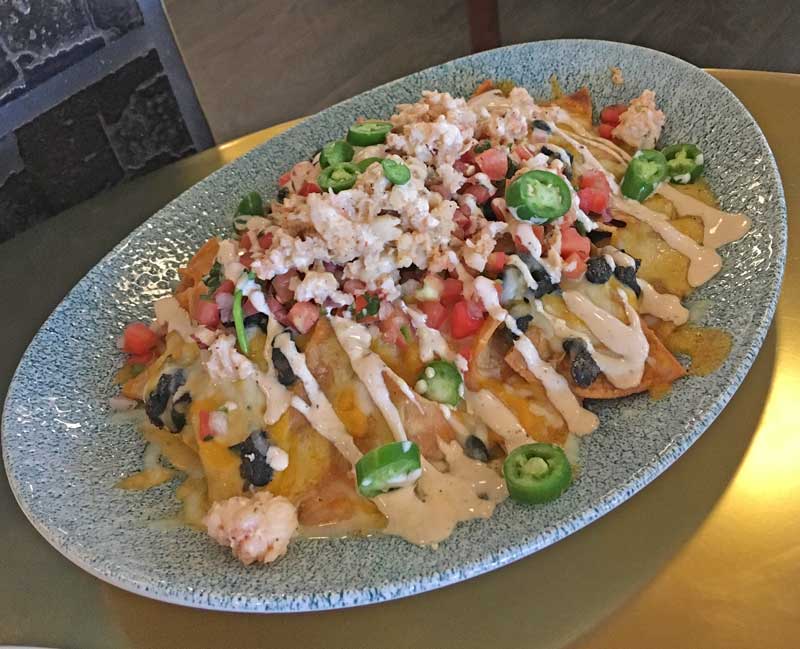 As the hip and happening spot, The Lamplight Lounge can be challenging to get into. The best plan is to make a reservation through Disney Dining Reservations up to 60 days in advance. If you can’t get a reservation, they also accept walk-ins for both upstairs and downstairs, but prepare to wait. They are open from 11 a.m. until 9 p.m., and it is common to see people waiting outside 30 to 45 minutes before opening. Both upstairs and downstairs locations offer fabulous views, but diehard Pixar fans will especially fall (with style) for all the Pixar memorabilia, artwork, quotes and whimsical signage downstairs. Wander about and take it all in.

Do you remember the Abominable — scratch that — Adorable Snowman from Monster’s Inc.? Well he’s selling yellow snow — It’s Lemon! Along with other chilled desserts. The It’s Lemon! is nondairy lemon soft-serve, and this is the only place in the parks you can get this addicting treat. You can get it in a cup or cone, and you also have the option of enjoying it swirled with vanilla or chocolate ice cream (which you can also get without the lemon). You can get it dipped in white chocolate—It’s Snow-Capped Lemon! or order the most photographable and popular of them all the Pixar Pier Frosty Parfait, which adds a blue raspberry swirl and a cherry on top to complete the Pixar blue, yellow and red color scheme. Visit in the morning or evening for the shortest line because people line the pier waiting for this delicious and refreshing treat in the sunnier parts of the day. 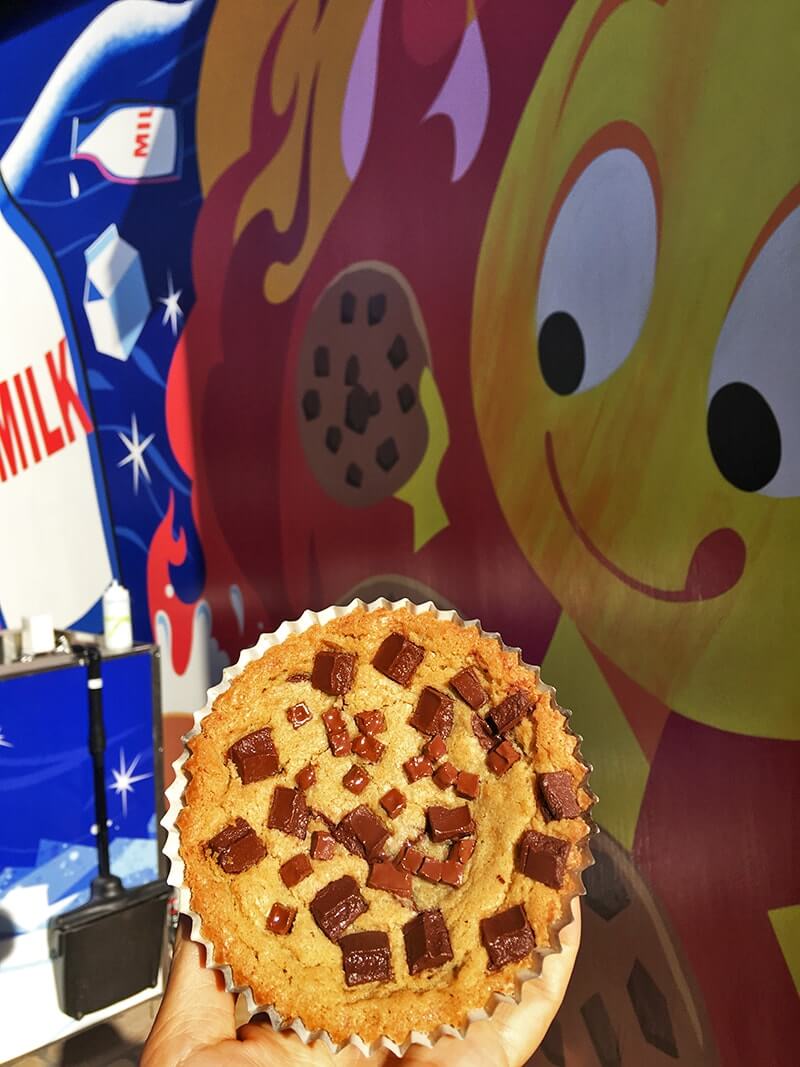 You’ll exit the Incredicoaster, jonesing for a cookie after smelling Jack-Jack’s cookie in the second tunnel. And what luck! There’s a Jack-Jack Cookie Num Nums cart right there. You can order three different cookies:

We tried them all — after all, we take our research seriously, sugar highs and all. While we appreciate the gluten-free option, the warm Jack-Jack Cookie Num Num was the winner for us, and now we understand why Mr. Incredible uses them to attract Jack-Jack’s attention. Cookies and Milk go together like Jack-Jack and Edna, so you’ll want some 2% milk, vanilla almond milk, soy milk, chocolate milk, or strawberry milk from the cart for dipping or washing it down. 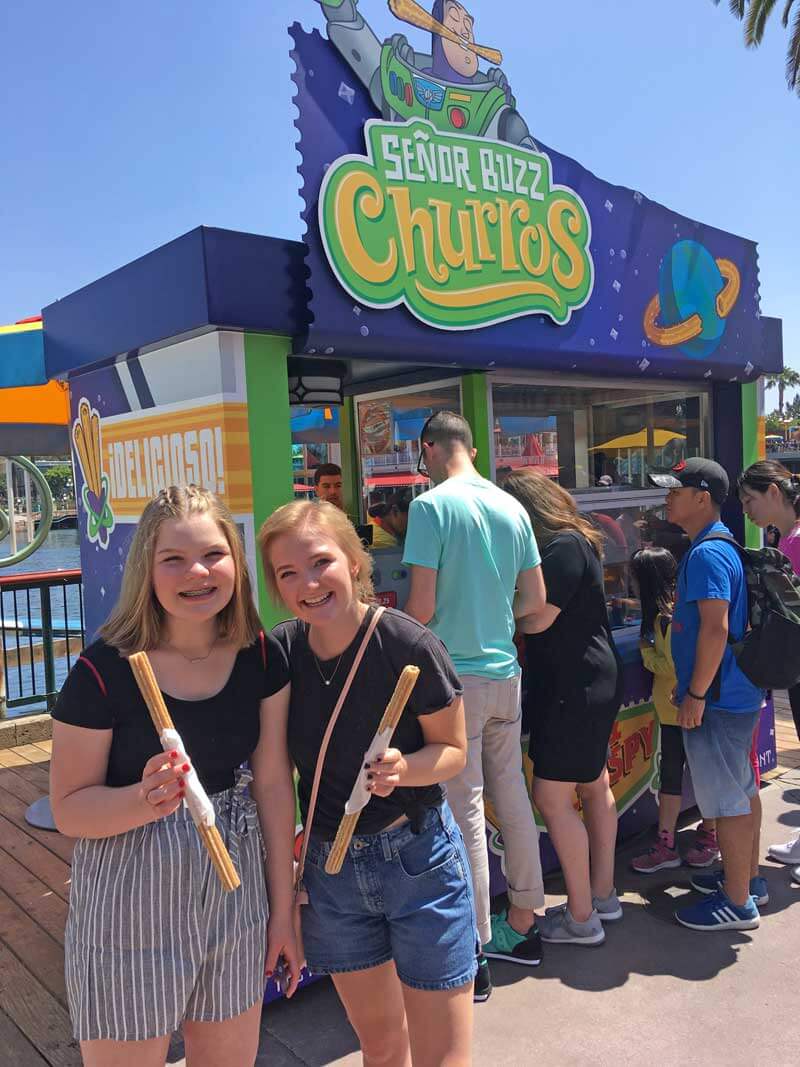 The Toy Story Boardwalk neighborhood has two food stands: Poultry Palace and Senor Buzz Churros. You can hop over to Poultry Palace for a quick bite. The stand is shaped like a giant fun meal box and you can order a box with three meaty chicken legs and coleslaw in it. They also sell corn on the cob and those classic Disneyland Resort favorite treats — turkey legs.

It looks like someone flipped the switch to Spanish mode! Senor Buzz Churros sells one of our favorite Disneyland snacks, the regular churros, plus Caliente! The Caliente churro is red and tastes like Red Hots. 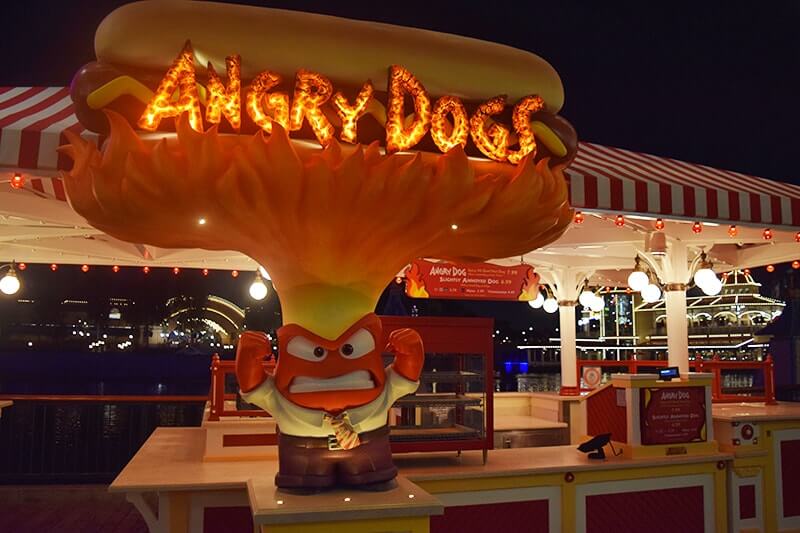 You can’t miss Anger from “Inside Out” burning with rage at Angry Dogs near the Pixar Pal-A-Round. Angry Dogs sells a spicy all-beef hot dog (with a small bag of “Hot Fries”) called the Angry Dog and the regular Slightly Annoyed Dog (with potato chips). Both come with sauces for any mood such as:

The Inside Out Headquarters neighborhood is still part of our imagination, but Bing Bong’s Sweet Stuff has bounded into play and is now open, much to our delight. Bing Bong is made mostly of cotton candy and cries candy tears, so it’s fitting that he has sweet treats like saltwater taffies, rainbow cotton candy, other candies, and colorful flavored popcorn. It’s also the place to get handmade treats such as cake pops that feature your favorite emotions and my favorite — caramel apples. They have a Bing Bong apple and a Rainbow Unicorn Apple, which are Granny Smith apples dipped in caramel and chocolate and decorated with fondant, colored sugar and marshmallows. Is anyone else drooling? 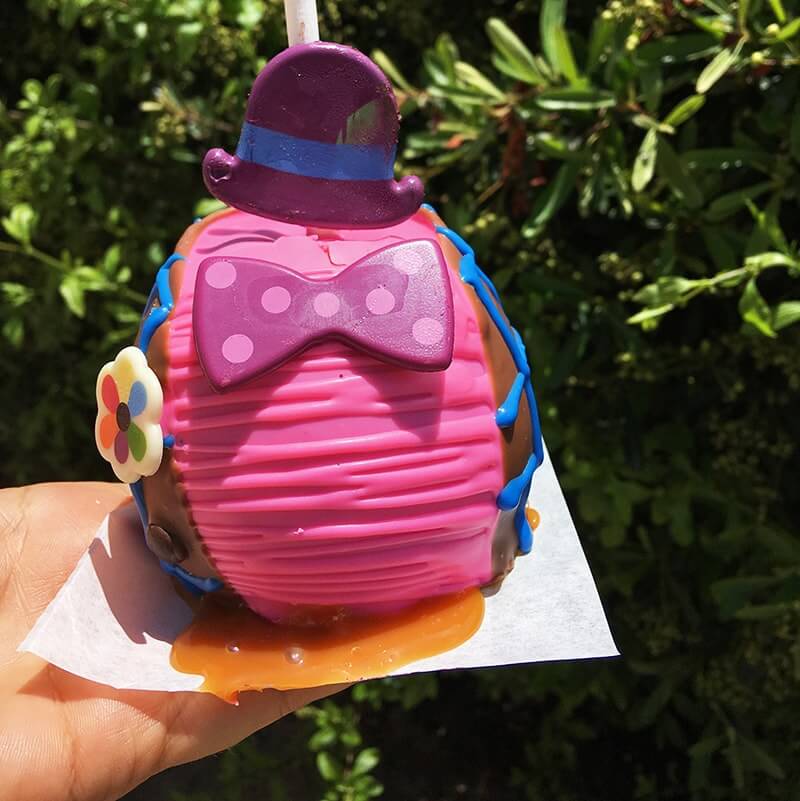 Tad is hopping excited about the Memory Refreshers, which are frozen drinks that come in all colors and flavors that are inspired by characters like Rainbow Unicorn and Bing Bong (called Imaginary Pal). They are made with flavored sodas, candies and special toppers. I don’t know about you, but my memory could definitely use a refresher!

This concludes our guide to eating at Pixar Pier. The good news is that that even though the Pixar Fest celebration ends September 3, 2018, these sweet snacks and delicious food and drink will stick around as permanent parts of the Pixar Pier neighborhoods, even as they continue to grow and evolve over the next year. So keep Fear from taking control of your emotions because you’ll suffer no fear of missing out … as long as you can eventually get to Disney California Adventure to try these tasty Pixar Pier foods.