Pixar Fest at Disneyland brings some fun entertainment to both Disneyland and Disney California Adventure now through Sept. 3, 2018. This celebration of friendship includes special Together Forever fireworks, food, merchandise and awesome parades. We all know that good friends take turns and share, so the parks have swapped parades during Pixar Fest. That means the Pixar Play Parade has “park hopped” over to Disneyland for the first time, plus it has added some fun new elements. It’s led by the hopping Pixar Lamp and Ball (to the “Countdown to Fun” theme song) and introduces floats and characters from "Up" and "Inside Out" to the lineup that already includes Pixar Pals from "Monsters Inc.," "Toy Story," the "Incredibles," "Finding Nemo," and "A Bug’s Life." You’ll definitely want to find the best viewing of the Pixar Play Parade, so here are some frogtastic tips for seeing this playful parade. 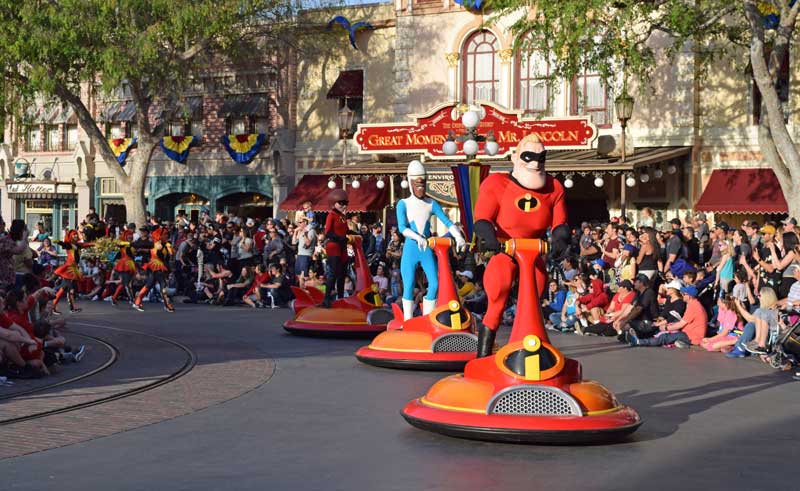 Frogtastic Tips for the Best Viewing of the Pixar Play Parade

Decide which parade to watch 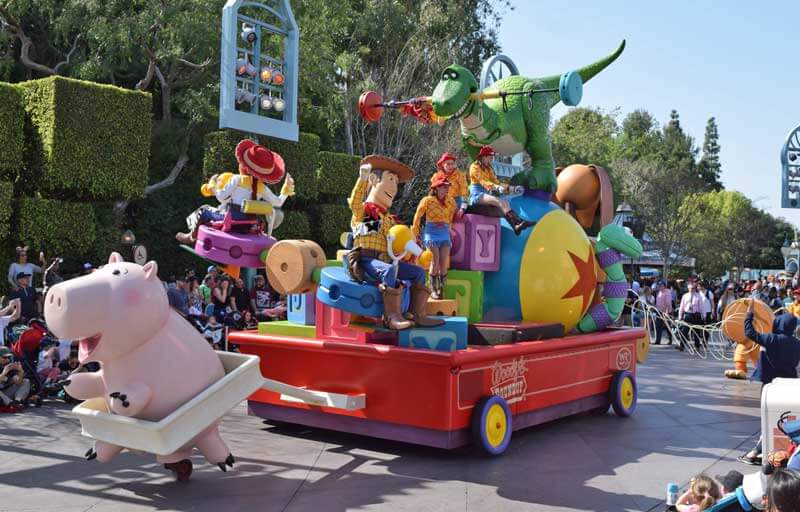 Chances are there will be two Pixar Play Parades each day when you visit, but there are a few days with only one parade. You’ll definitely want to check the entertainment calendar for parade times to plan when to see it. On days with two parades, the early parade is usually at 3:30 p.m. and the second parade is at 6 p.m. On days with one parade, the parade is most likely at 6 p.m. It might be a little easier to find a good viewing location for the 6 p.m. parade because there are more shady spots as the sun gets lower, it’s not as hot and once the first parade finishes and clears out you can jump in place for the next parade. If there is only one parade it is your only shot to see it so keep your eye on the crowds so you can get in place.

Find out which direction the parade is moving

Whether you are looking for the best viewing of the Pixar Play Parade or Paint the Night over at Disney California Adventure, it’s always important to know which direction the parade is heading. That way you can look for a spot that allows you to see the parade approaching (instead of sitting behind a blind corner) so you can get the most enjoyment and enjoy all the dancers. You also do not want to stare into the sun for the Pixar Play Parade, so position yourself so the sun is behind you instead of behind the parade. 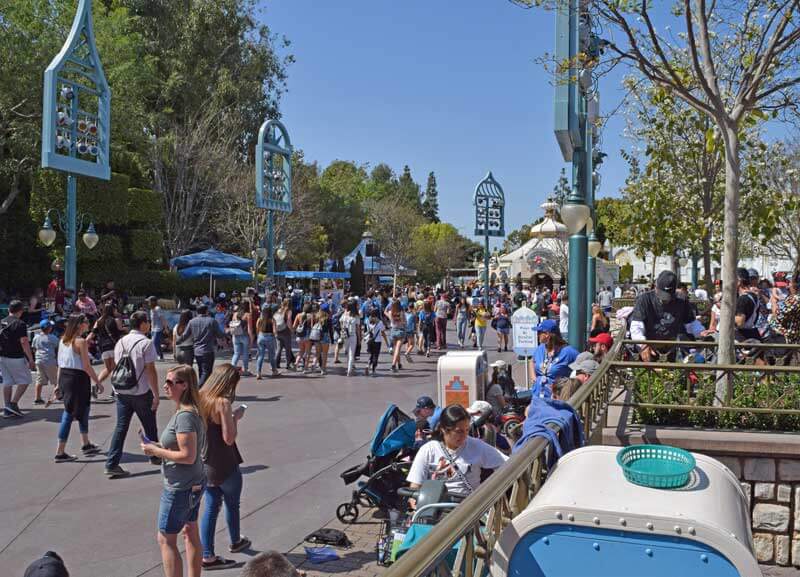 The rule of thumb is that the for the first parade and days with a single parade, the parade begins near “it’s a small world” and ends near The Mad Hatter store near the entrance to the park. When there is a second parade, the route is reversed. If you aren’t sure, just ask a cast member for the best and most up-to-date information. People seated near the start of the parade will experience the parade about 20 minutes before guests at the end of the parade route.

Find the best spot to view the Pixar Play Parade 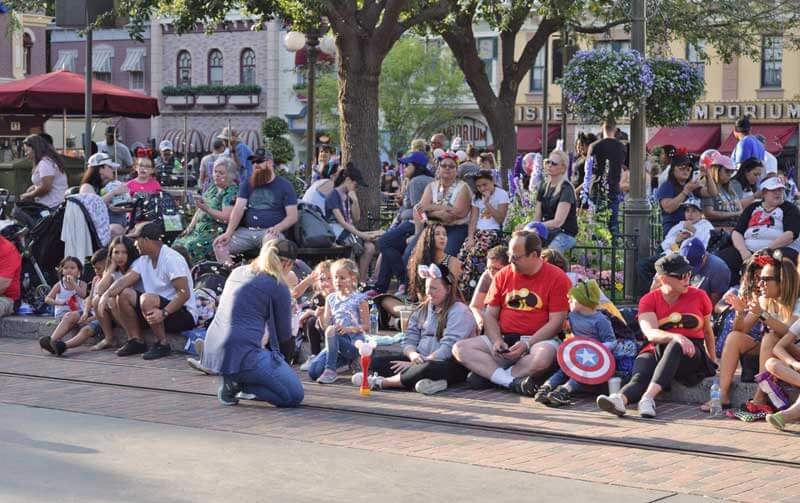 There are so many factors that go into making a spot the best viewing of the Pixar Play Parade for a family. We’ve hopped around and seen the parade from many locations and there is no number one location, but there are some guidelines for getting the best viewing for the Pixar Play Parade. On a hot, sunny day the best spot is a spot is in a shady area. You might sit there for at least and hour or two (or three) so you do not want to bake in the strong California sun. We prefer sitting on a curb or bench than on the ground because it’s easier on the back. As mentioned, we don’t want to stare into the sun so we position ourselves so the sun is behind us and not in front of us or in our view when watching the parade approach. Main Street U.S.A. is a popular parade-viewing location. There are some benches and shady areas, curbs, and plenty of places to shop or get food and snacks or drinks while we wait. But the spaces tend to fill up sometimes two hours before parade time. You can usually get a standing spot behind a bench or behind the first row of sitters closer to parade time near the train station. You can usually watch from the raised train station platform to get a view from above. Another strategy we use to get a good spot is to watch closer to “it’s a small world.” When you are walking from the Matterhorn toward “it’s a small world,” there are shady spots on the left and a raised platform on the right. We usually hop onto the raised area to give us a great view of the parade. Reserved areas to avoid include the Dining Package viewing areas and the VIP reserved area directly across from “it’s a small world.” 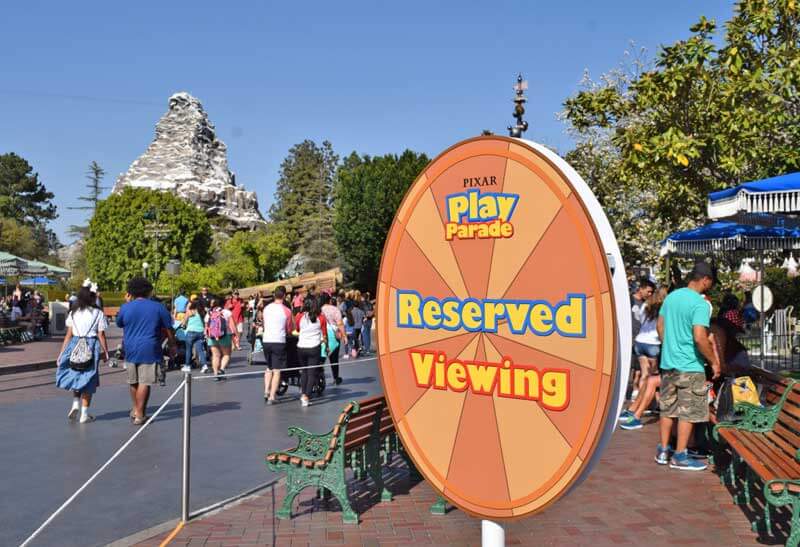 Another tip to getting the best spot is to choose a spot that is not behind a crossing area. If you see an area where they are not letting people sit to use as a walkway, you do not want that to be between you and the oncoming parade. Disney cast members let large groups of people walk through during breaks in the parade, but that can affect your view of the parade a lot. You can, however, sit right in front of a crossing area and it will not affect your view because people are walking behind you. This is why it is important to know the parade direction. There are large crossing areas between the Matterhorn and Mad Tea Party, from the Partners Statue to Tomorrowland, between Refreshment Corner and the Main Street Photo Supply Co., from Market House to Carnation Café area and in front of City Hall, so use caution when choosing a seat in those areas.

Know when to get in place for the Pixar Play Parade 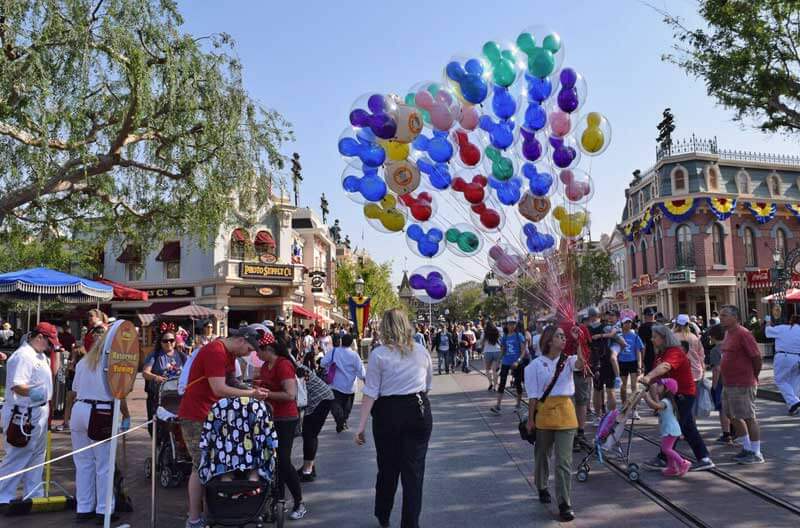 The biggest trick is determining when to get in place to watch the show. It can depend on crowds and weather. People start sitting on benches and curbs in the shade at least two hours before the parade. The more crowded the day, the earlier people will line up, so you might want to keep an eye on the situation. People lay out beach towels and blankets and save spots for family members who are riding rides or enjoying other areas of the park. Other families use the waiting time to let the tadpoles nap in a stroller or have a picnic and play with bubbles. The front row of a shady curb spot will fill in earlier than a sunny ground location. You can usually hop in place closer to “it’s a small world” or behind the first row of viewers or benches at other locations a little later as well. When viewing the second parade, look to get in place an hour before parade time. When watching near the train station it’s a bonus if you can time your waiting with the daily Flag Retreat ceremony. That way you will get some entertainment while you wait and get to experience this special event that salutes veterans and current service members with music and singing from the Disneyland Band and Dapper Dans. The Flag Retreat is often at 5:00 p.m., but it can vary so check the entertainment guide for the time.

Be prepared to get wet

Part of the fun of the Disneyland Pixar Play Parade is water play. Many floats spray water on the viewers, and this can be welcome on a hot day. You won’t get soaked, but you might want to use caution with your camera and phones if you see water coming. 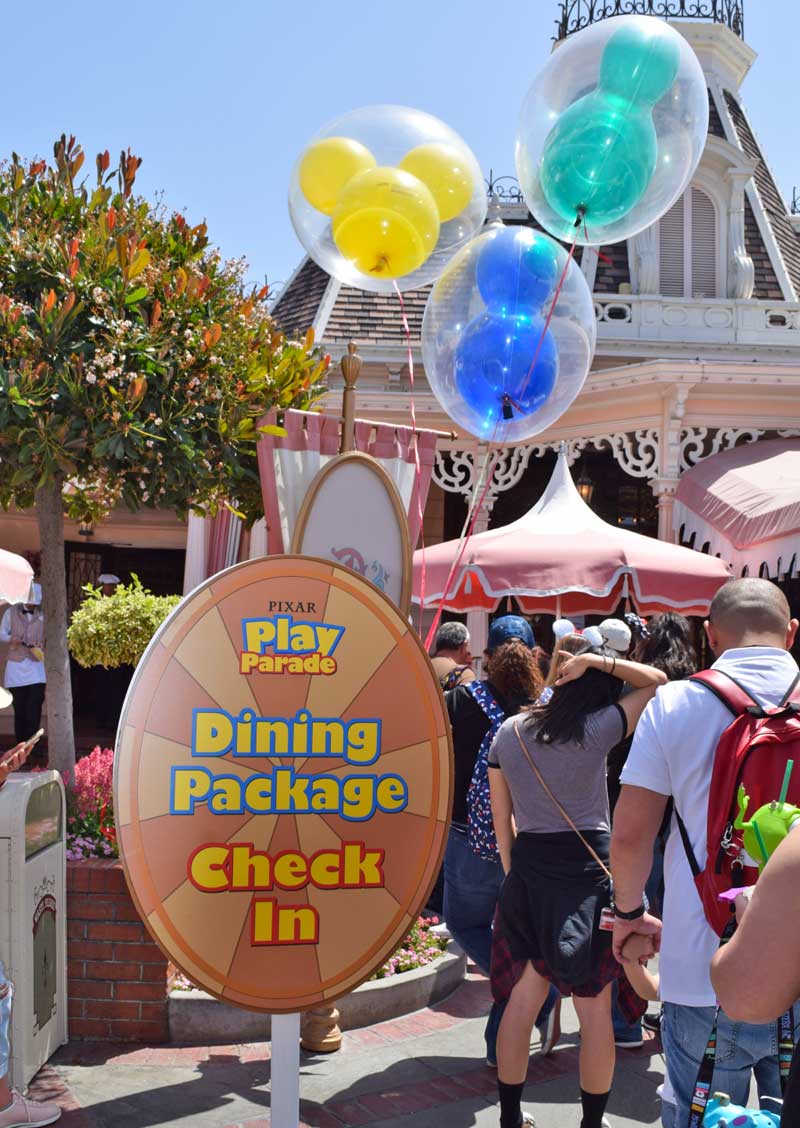 What about Pixar Parade Dining Packages?

So if you do not want to plan your day worrying about where to sit, you can opt for a Pixar Play Parade Plaza Inn Dining package. You can purchase a picnic-style lunch (you eat it at Plaza Inn — not take it with you) that comes with a voucher for a parade viewing location located on Main Street U.S.A. in the areas in front of the restaurant. Adult packages run $39.99 and children meals are $24.99. Meal choices are fried chicken, salmon and vegetarian options. The kid meals include choices for chicken tenders and macaroni and cheese. There are gluten-free options. Reserve in advance through Disneyland Dining Reservations. Want to see the first parade? Make a reservation between 12 p.m. and 1:55 p.m. For the second parade (if applicable), reserve between 2 p.m. and 4:15 p.m. Same day reservations are subject to availability.

For more fun tips for hopping about Pixar Fest, jump over to our “friendtastic” guide to Disneyland Pixar Fest. If you love a parade, then definitely be sure to park hop over to Disney California Adventure to catch the nighttime Paint the Night Parade as well.