Villains, Darkness and Drops - The Scariest Rides at Disneyland 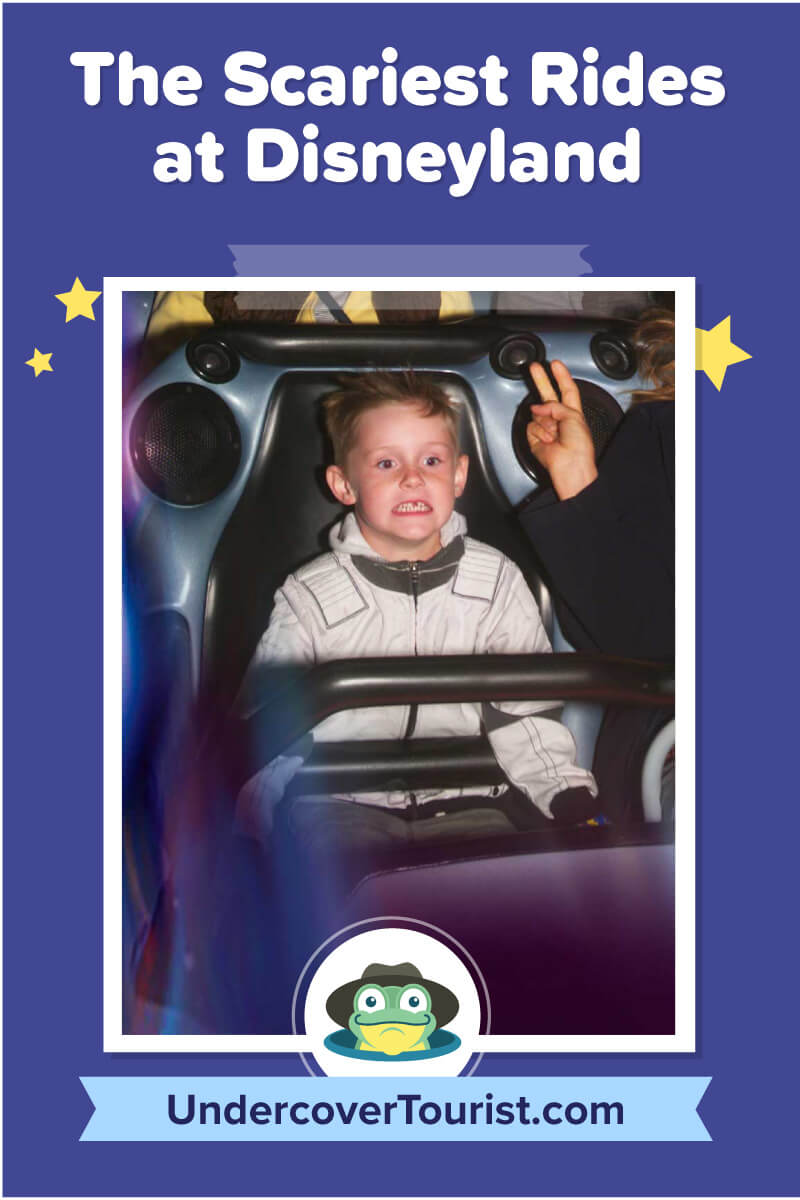 By now, we've been in enough theme parks to know that sometimes tadpoles are frightened by the darnedest things. No, we're not talking scary thrills. We're talking creepy queues, scary on-ride characters and things that go bump in the night! Sometimes just being in the dark is enough to scare the little ones. The last thing you would expect can terrify a toddler or preschooler. The scariest rides at Disneyland may surprise you, so hop along as we look at the rides and attractions with the highest scare factor!

By all means, what scares one tadpole may not scare another, and sometimes you just can't predict what's going to terrorize your own. Even rides that seemed acceptable last year may now seem terribly frightening to them! That's why Leap and I do a bit of ride research before we head to a new park. We try to identify any rides that might scare Lily and then watch the ride videos together. When we get to the park, we remind her that we watched the video, and that it's not as scary as it looks. One of the best ways we've found to help Lily get through a scary ride is just to have her shut her eyes.

Do you have a tip for handling scary rides? Be sure to share with us in the comments below! Now, without further ado, here is our MONSTER list of Disneyland scary rides!

Pirates of the Caribbean at Disneyland Park

The queue alone used to scare Lily. Entering the darkened chambers and knowing that a pirate could be around any turn was almost too much. The boat ride itself has its share of potential scares with skeletons, loud cannons and gunfire, and creepy animatronic pirates. When Lily was a tiny little tadpole, she would hide her face in my chest whenever we passed a skeleton. Now she sings, “Yo, ho! Yo, ho!” along with the pirates. Here's a look back at the the classic ride before the redhead became a gun-toting pirate.

“Head back, face forward and hold on … 5-4-3-2-1, go!” The Incredicoaster is more exciting than scary, but its upside-down loop, steep hills, three tunnels and the 0 to 55 mph exhilarating acceleration after Dash’s countdown are enough to scare off some potential riders. Don’t worry: There is a humorous storyline and mission that involves all members of the Parr family and Edna Mode from “The Incredibles” (along with yummy smells wafting though the second tunnel) to distract you and keep you smiling. If you are still upset after you exit, a cookie num num with milk will make everything better.

Oftentimes, when you are expecting the little ones to be scared, they aren't scared at all. This was the case with Haunted Mansion. I was fully expecting it to scare the living daylights out of Lily, but surprisingly, the doom buggy ride around the mansion with its roaming ghosts didn't frighten her one bit. (I, on the other hand, remember being terrified of the end when the ghost host said that a ghost would follow us home when I was a young froglet. You know that I spent the entire day looking over my shoulder, worried about that ghost.)

Space Mountain does not have any terrifying, large drops, but the coaster is completely in the dark, so that definitely sets off some people’s alarm bells. You might think your tadpole is pretty brave ... but the on-ride photo tells the true story! 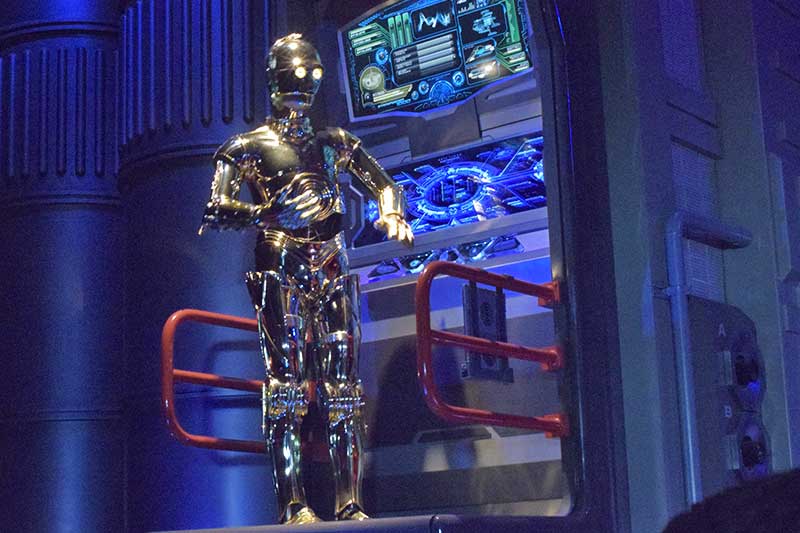 With more than 384 possible combinations of segments, no two visits to Star Tours will be the same. You never know which villainous characters, heroes from the Resistance or space creatures you might encounter on your space flight. Even the same locations will have slight differences. Because of the dark, confined space, this is one of those rides where Lily made sure to hold my hand tightly! 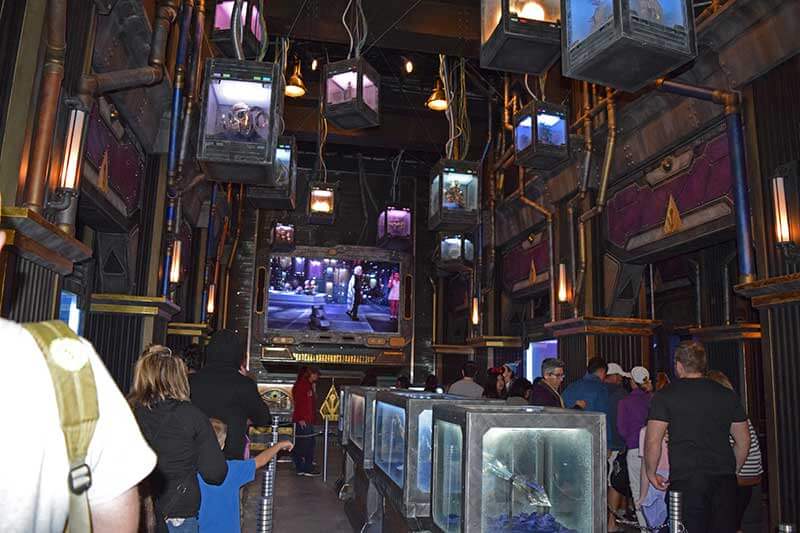 With the re-imagining of Twilight Zone Tower of Terror into Guardians of the Galaxy — Mission: Breakout!, this is definitely one of the scariest rides at Disneyland, with more darkness and fall sequences than before! It is somehow less scary and more lighthearted than the Tower of Terror. But still, you'll encounter a randomized sequence of drops, complete darkness and a creepy queue with scary lighting. I'm not sure we'll ever get Lily on this one, because the theming is so immersive! The video segments on the ride are actually more humorous than scary … in the regular version. The Halloween nighttime version, Monsters After Dark, is even scarier. 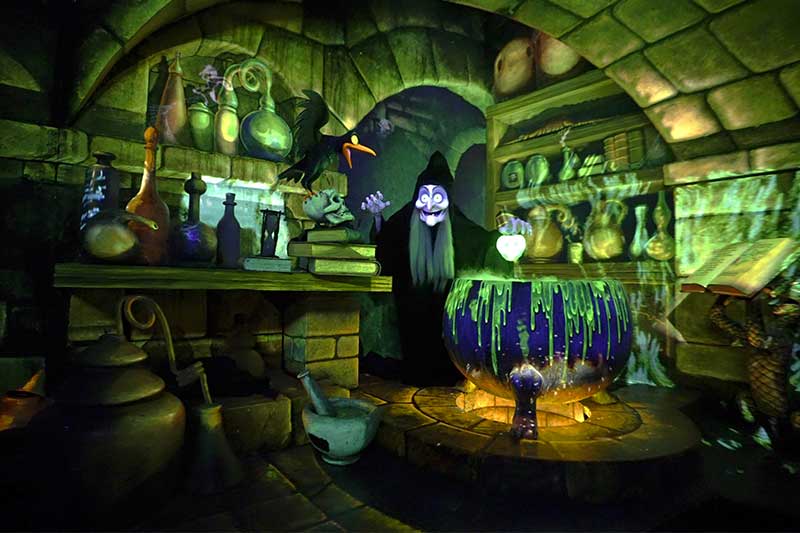 Snow White got a happily ever and a more enchanting story after in a new refurbished version of an old dark and scary ride. The new version debuted after Disneyland reopened following the temporary closure due to COVID-19. The ride is way less scary than it used to be, but watch out for the Evil Queen and her witch alter ego who still make appearances. Find out more about the refurbishment in our post on what's coming to Disneyland in 2021.

The story of Snow White and the Evil Queen came to life in Snow White's Scary Adventures. The dark ride was one of the few remaining original Disneyland attractions. This ride was sure to terrify, starting with the queue, which had guests enter the Evil Queen's castle. Of course, the queen appeared on the ride itself (she still does!), but the menacing forest is gone and the ride has a happier feel to it. Lily is excited to see the much more cheerful version after the Disneyland reopening!

We’ve seen some bigger kids start shaking and gripping mom’s hand pretty tightly as the music turns more sinister and Brer Rabbit finds himself in deep trouble while the log ascends the final hill (passing some creepy talking birds) before plunging straight down over the falls. Other people are simply afraid of getting their phone wet. Luckily, after going over the falls it’s all “zip-a-dee-doo-dah” fun and happiness so you get a chance to recover and decide maybe it was not so bad after all. Speaking of refurbishments, this ride is getting re-themed to “The Princess and the Frog.” 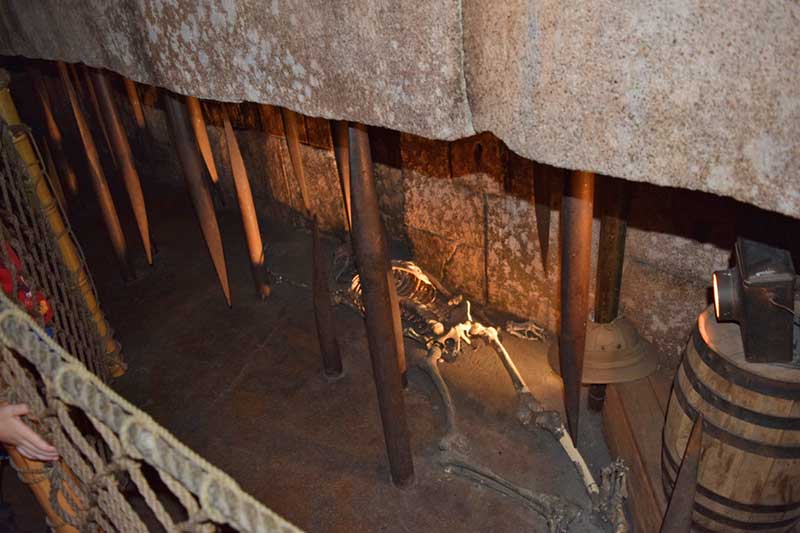 “Snakes! Why did it have to be snakes?” Children familiar with the Indiana Jones films may not find it quite as menacing, but there are so many creepy crawlies (and bigger menaces!), along with darkness both in the queue and on this enhanced motion vehicle dark ride, that many tadpoles — and grownups! — may find this a little too intense.

“Soarin’ to Tower, we are ready for takeoff.” You may be surprised to see Soarin’ on this list, but the imagery is so real that “little aviators” can become terrified of falling into it. We recently exited with a hysterical preschooler who was sobbing uncontrollably because of a waterfall scene, which was breathtaking in a good way to everyone else, but was so scary for her. So we’ve added Soarin’ to our list of the scariest rides at Disneyland just in case you have that new rider for whom everything is incredibly real. (Disney magic is so real it hurts sometimes.) 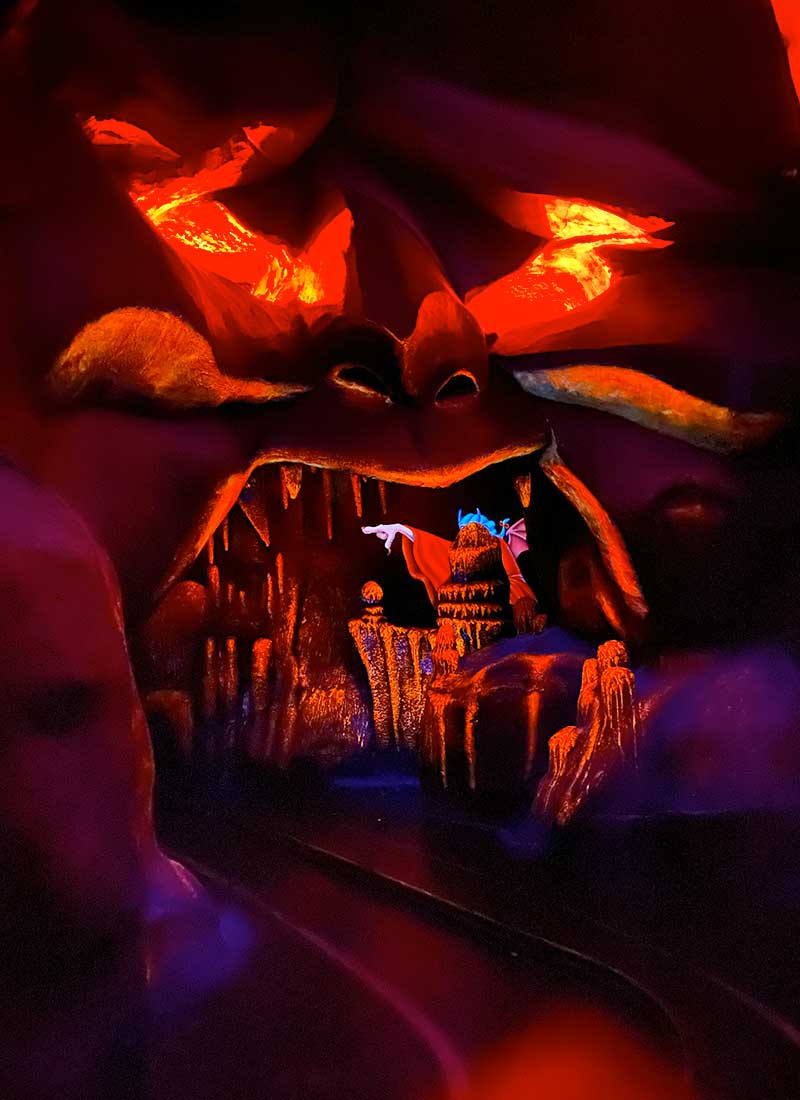 For little ones, every dark ride can be scary simply because of the darkness. The subject matter in Mr. Toad's Wild Ride is scary enough — a wild ride that has a “collision” and ends in Hell — complete with small devils, a menacing demon and an oversized dragon!

Another dark ride with scare potential, Pinocchio's Daring Journey opens with Pinocchio being held in a cage by the evil puppeteer Strombolli. Riders follow along on this daring journey that includes visits to a carnival with creepy clowns and a joker, and watching your friends turn into donkeys.

Despite how it looks from the outside, and its setting in Mickey's Toontown with the other "kiddie" rides, there is a fright factor on Roger Rabbit's Car Toon Spin, thanks to a queue of dark, narrow alleyways. 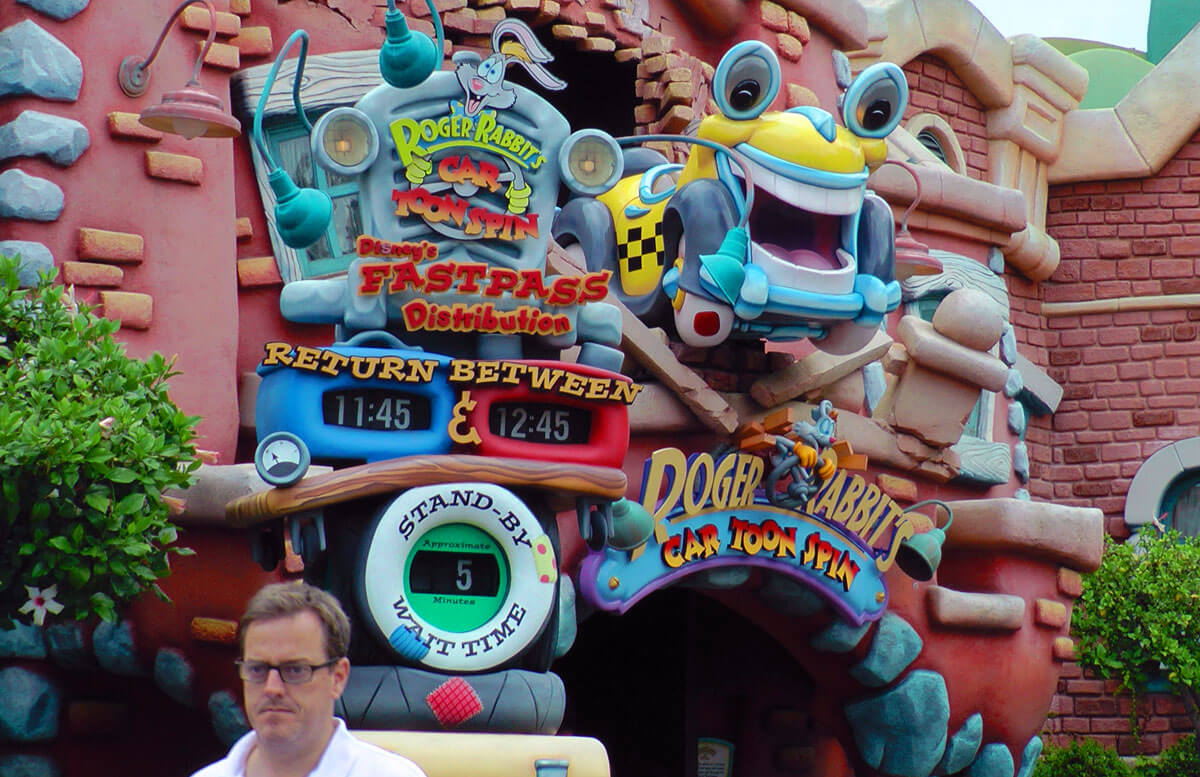 This ride is not overall scary in concept, but it is very scary to some adults and small children. There are some dark segments with scary loud explosions and a few terrifying creatures. Plus, you are closed in and under the illusion that you are submerged and cannot escape, so people with claustrophobia are not fans. There's an alternate experience that does not require going down a tight staircase and being submerged.

Alice in Wonderland at Disneyland Park 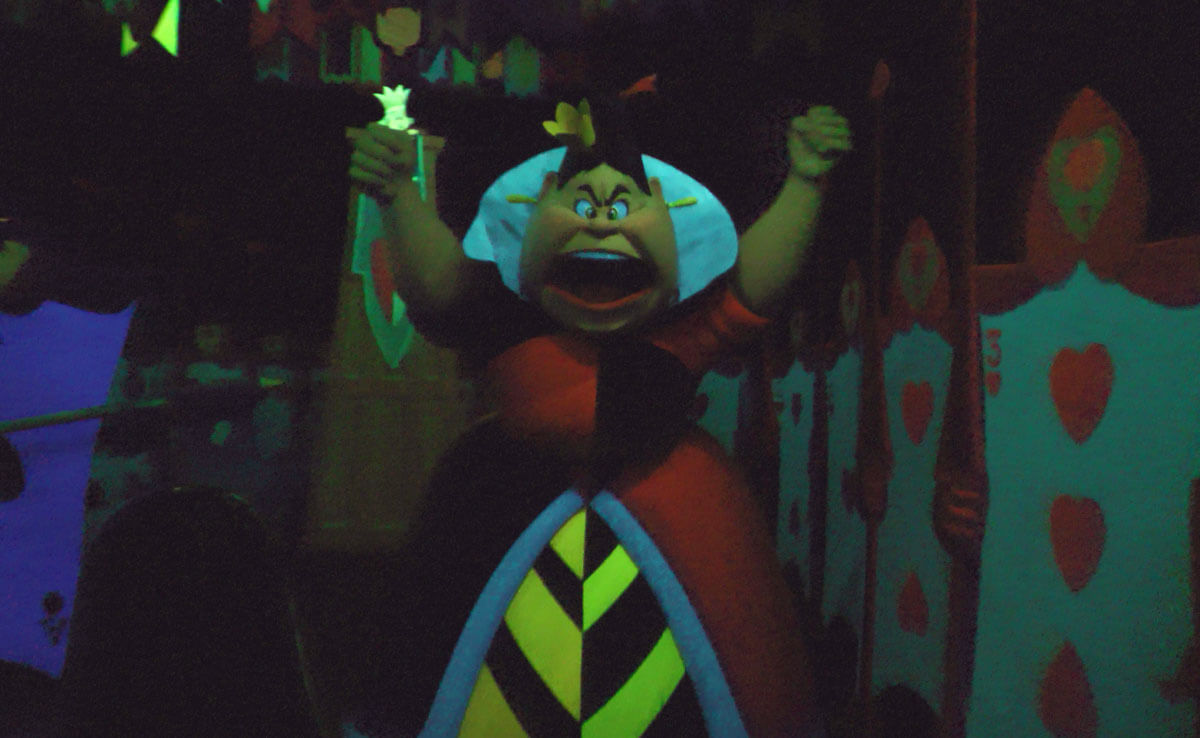 While the fantastical story of Alice's Adventures in Wonderland has always been the stuff of nightmares, this dark ride is mostly tame. Little ones might have issues with the Queen of Hearts shouting, "off with their heads!" 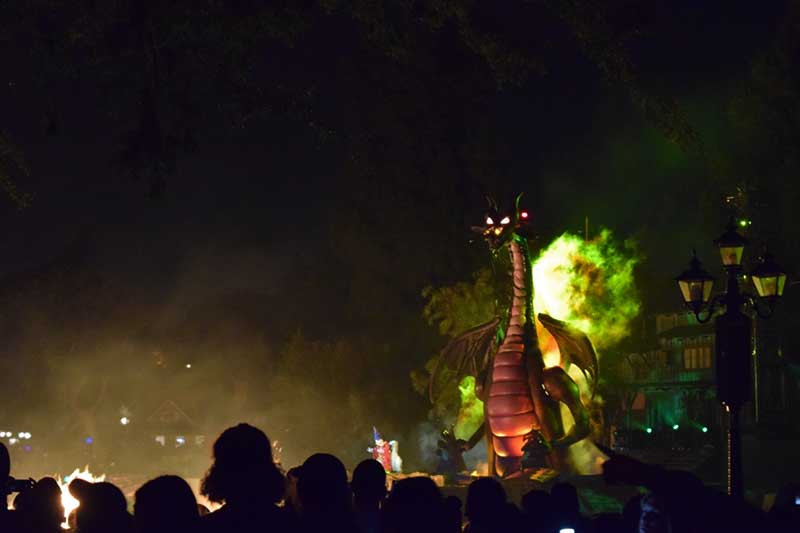 While this is a show and not at ride, it has its scary moments. While our son Tad loves it now that he's older, he wasn't so fond of Fantasmic! the first time he saw it. Between the villains projected onto the screen, towering creatures and the loud noises and overall special effects, he was cowering behind Leap! 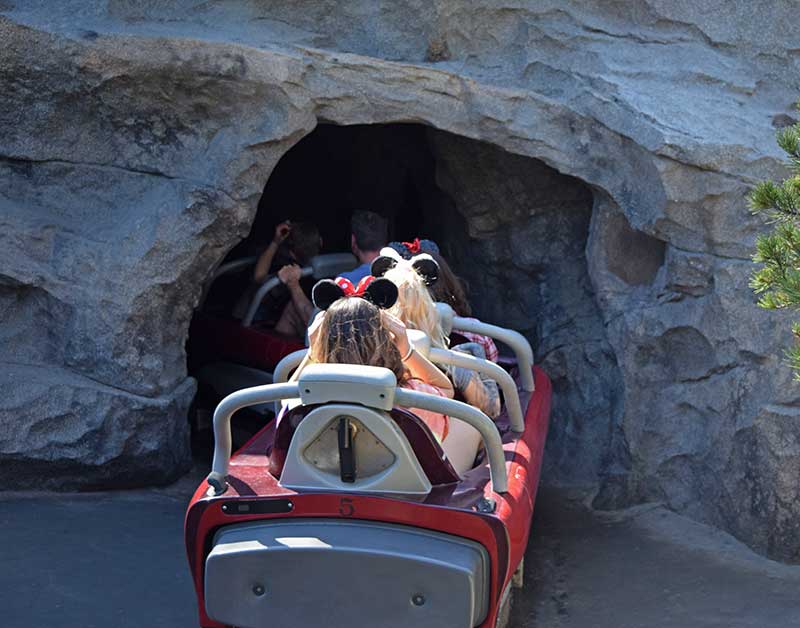 You start out in the dark as you climb up through a cave from the bowels of the mountain. Then, you hear the growling and stomping of the Abominable Snowman, who seems to be getting closer. You can almost see him through the ice, and then more darkness. Is he there? Will you encounter him, and is he going to get you? The ride is even scarier at night when you do not have the alternating bursts of sunshine in between dark areas when you exit and re-enter the mountain. Plan to ride it with your tadpoles during the day if it’s their first time.

What scared the daylights out of you or your child at Disneyland? Share your favorite (or least-favorite) Disneyland scary rides plus any tips you have for handling them in comments below!