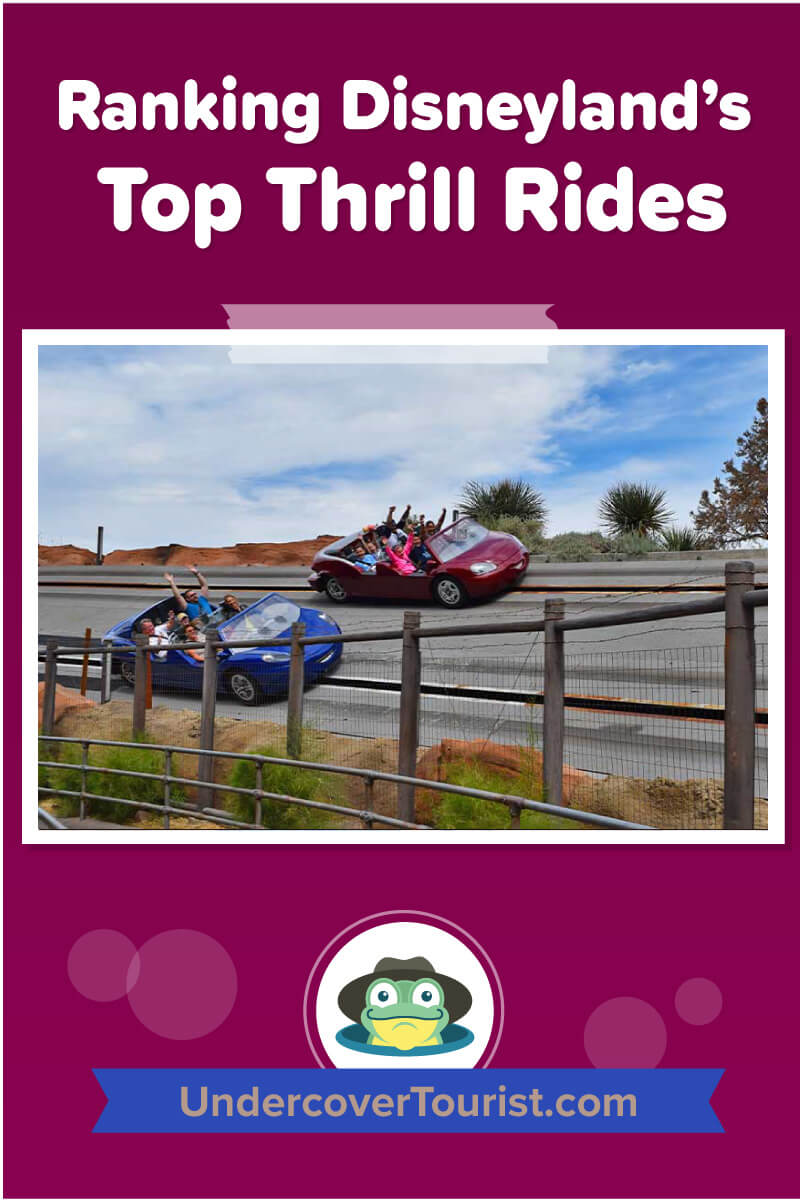 Families come to the Disneyland Resort to experience the magic, ride the rides, see the shows and catch up with their favorite Disney pals. Everything at Disneyland is geared toward families, so when we're talking thrills, it's a relative term. We’re ranking the top thrill rides at Disneyland Resort so you can find the perfect amount of excitement, whether it's for a “first-ever, finally tall enough to ride” tadpole or a veteran thrill-seeker.

Most of Disney California Adventure Park and Disneyland Park's top thrill rides are on the milder side, more euphoria-inducing than death-defying (for the latter, you'd need to travel farther north to Knott's Berry Farm or Six Flags Magic Mountain, or south to SeaWorld San Diego). There are a few thrill rides that pack a punch: Guardians of the Galaxy — Mission: Breakout! has some free-fall sensation drop sequences that you’ll definitely want to do before a big meal. Many more will provide a good ol' adrenaline rush — perfect for fun-loving parents and adventure-seeking kids. Today, we're talking about the top thrill rides at Disneyland Resort, those hang-onto-your-hat and maybe even keep-your-eyes-closed-for-parts-of-it experiences. Let's get started! 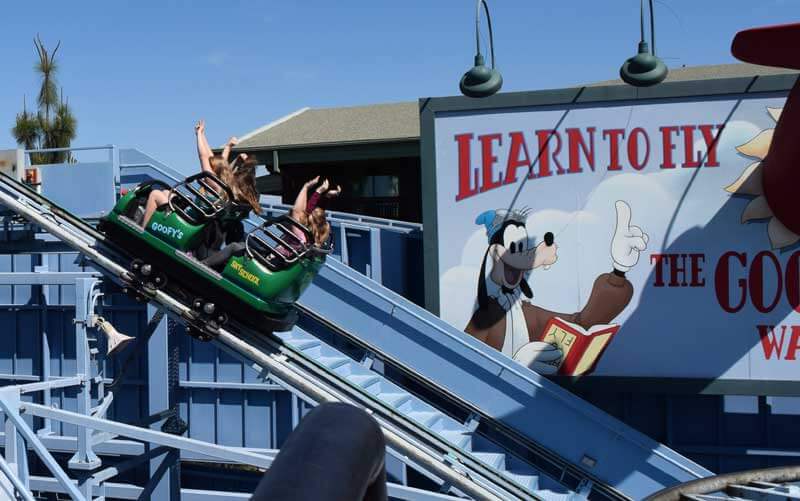 The Wild Mouse-style coaster offers plenty of squeal-inducing twists and turns rather than pure thrills or drops. Nevertheless, it makes our list of Disneyland's top thrill rides and makes a good coaster for those who fear big hills.

This action-packed enhanced motion vehicle dark ride follows Dr. Jones over rough terrain on a fast-paced quest through the Temple of the Forbidden Eye. It offers some of the best theming this side of the Disneyland Resort! When in line, be sure to disobey any signs warning you not to touch the bamboo pole or rope. Definitely give them a tug for bonus thrills.

Howdy partners! This ride promises to be the wildest ride in the wilderness! One of Disneyland's famed mountains, Big Thunder Mountain Railroad looks more intimidating than it actually is. Themed after the Old West, it remains an enduring family coaster — and an explosive first coaster for many. 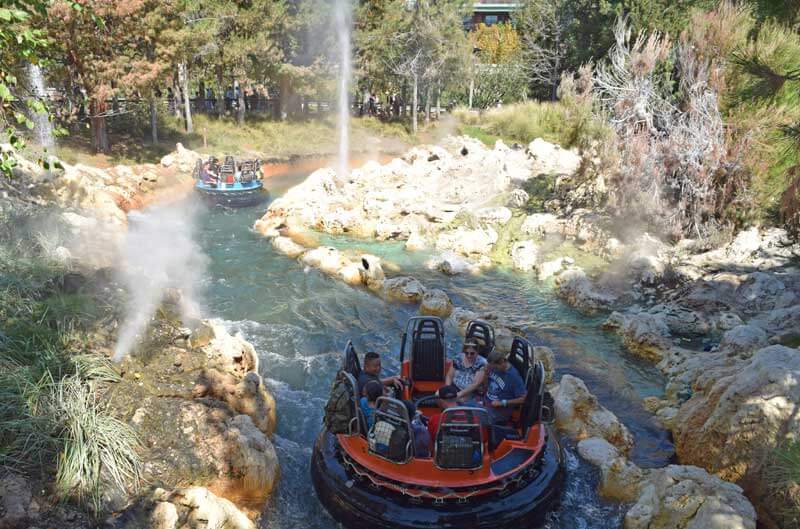 The tallest, fastest and longest river rapids in the world, Grizzly River Run offers a free-spinning white water rafting adventure starting from Grizzly Peak and ending in a dizzying descent. For those in your party who may not want to get wet (or may be too small to ride), there's some beautiful viewing areas near the ride to watch as rafts get drenched by geysers. 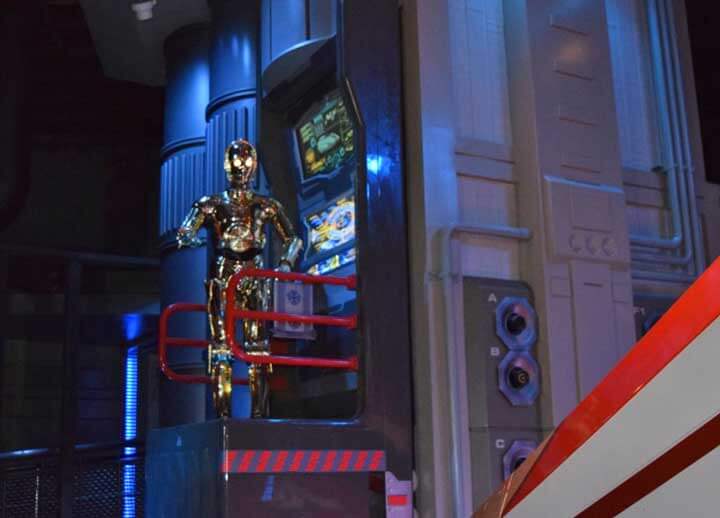 Put on your 3-D flight glasses before taking off on this simulated space flight with C-3PO as your pilot (FYI: He’s not programmed to fly this thing) and R2-D2 as your copilot. As you are about to launch, you might be intercepted by members of the First Order. You may learn there is a rebel spy onboard when C-3PO takes control and rockets you into the farthest reaches of the galaxy. Part of the thrill is that you’ll encounter different Star Wars characters and travel to different lands each time you take flight. New adventures appear from time to time, keeping this classic fresh and new. 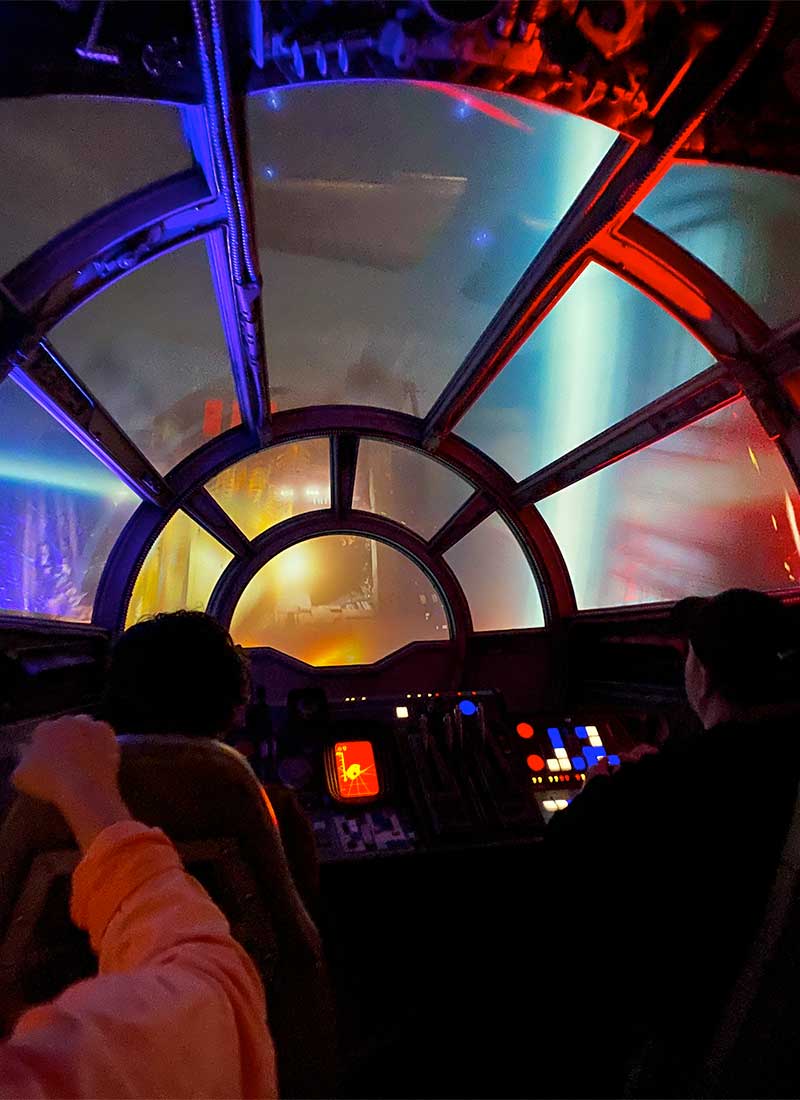 Stepping into the the cockpit of the Millennium Falcon is exciting enough, but then you get to actually fly that hunk of junk! You'll take on one of three jobs: pilot, gunner or engineer. You'll be flying, shooting and repairing the ship. Your thrill level is higher as a pilot than it is as an engineer. The pressure is on for your crew of six. Your goal is to use the Millennium Falcon to help space pirate Hondo Ohnaka obtain a valuable hyperfuel called coaxium without damaging the ship. You'll launch into hyperdrive, shoot the train and enemies and launch harpoons. If you've ridden it at least once, do a little research to find out how to hack the ship into "Chewie mode" for some additional excitement! 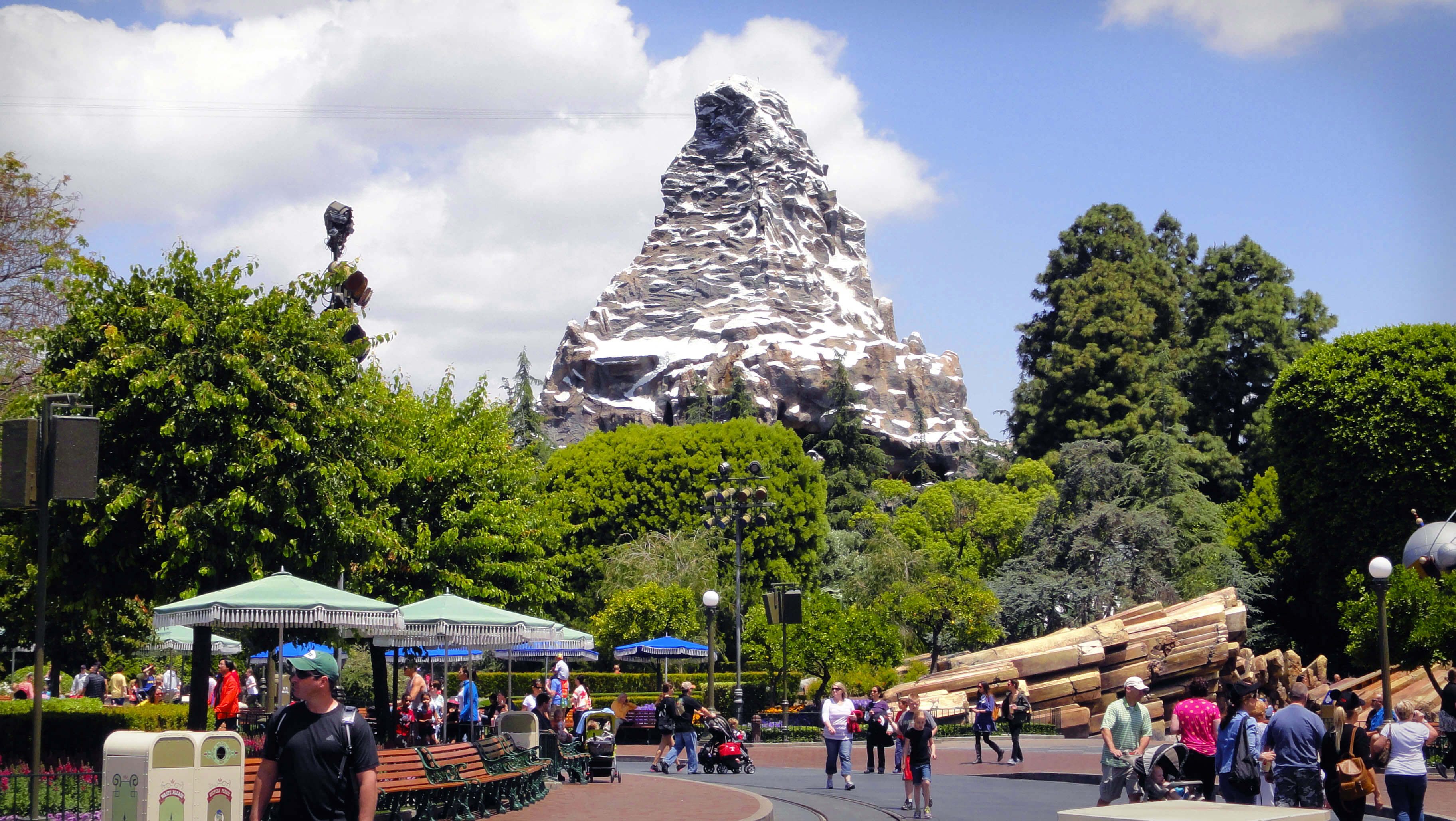 The first tubular steel coaster ever constructed has gone through several significant refurbishments over the years, but remains an endearing family favorite. Made to resemble the Matterhorn in the Swiss Alps, it features two intertwining tracks, a chain lift and then an unpowered descent through its many caverns. Watch out for the Abominable Snowman!

One of Disneyland Resort's most popular attractions is a high-thrills joy ride through the Ornamental Valley. It's also the best-themed attraction in all of Disney California Adventure Park, including a mischievous trip through Radiator Springs, a high-speed chase and a chance to encounter some of your favorite "Cars" characters.

A perennial favorite because of its incredible theming, big drop and cool payoff on a hot summer day, Splash Mountain has also stood the test of time with families at Disneyland. Say cheese for the camera as your log starts to descend the big drop! 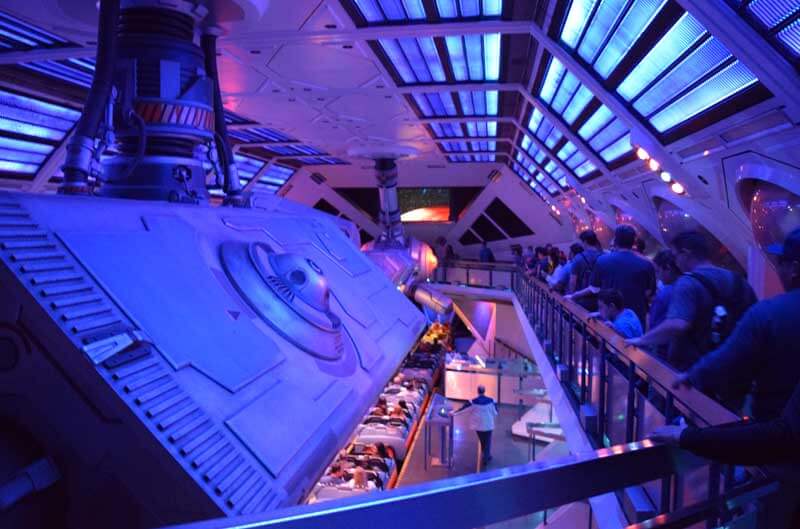 Hard to believe that Space Mountain, the second roller coaster built at Disneyland, is over 40 years old. The rocket ship roller coaster through the twists and turns of deep space is a delight for Space Mountain first-timers and veterans alike. Space Mountain has been known to morph into a scarier Ghost Galaxy at Halloween Time, and it has had a few runs as Hyperspace Mountain with a Star Wars theme. No, it never gets old. And with a Single Rider line, riders ages 7 and up can skip the traditionally long wait.

3. Star Wars: Rise of the Resistance at Disneyland Park 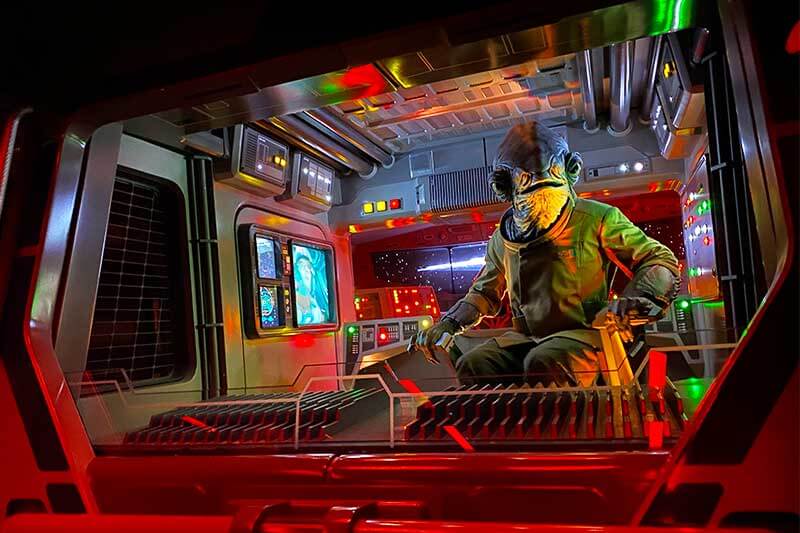 This trackless dark ride does not have the speed and hills of a roller coaster, but it's a thrilling adventure that really makes you feel as if you are in a battle aboard a ship in a Star Wars movie! We don't want to give any spoilers because the surprises add to the thrill, but this ride provides some exciting pre-ride experiences with familiar characters that immerse you into the story. Watch out for the First Order officers though. They mean business. There is a short drop, unpredictable ride movements and plenty of surprising visual moments that give this massive ride high ranking on the thrill scale. 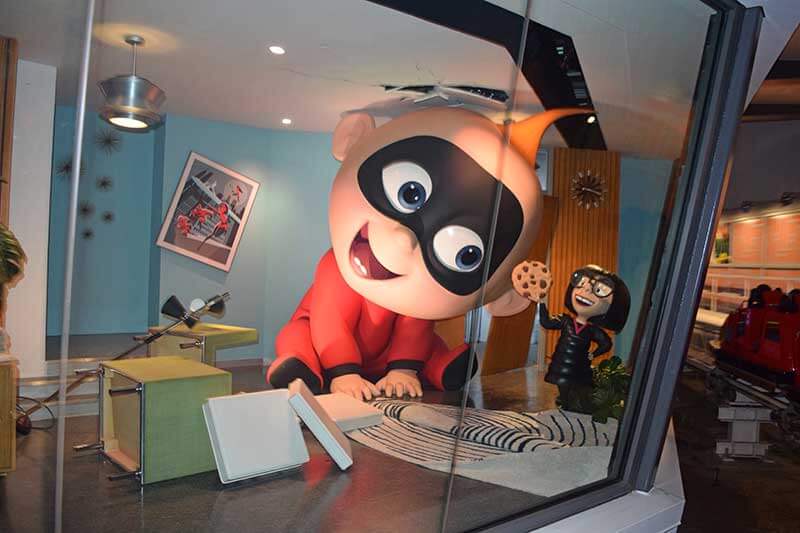 An old favorite, California Screamin’, was re-themed into the Incredicoaster for the opening of the new Pixar Pier. What can we say? The new version is Incredible! The ride takes off with Edna doing a bad babysitting job when she loses Jack-Jack. (Parenting tip: Don’t hire Edna to babysit.) Don’t worry! Dash sets out to chase him down, taking you along for the ride, launching from from 0 to 55 mph. With three themed tunnels, a storyline and even yummy smells that will get your tummy rumbling for a cookie-num-num, Incredicoaster packs a punch!

All of the Incredibles characters use their strengths in this mission, I mean coaster. You’ll definitely be using your strength to hold on tight. The steel coaster was made to look like an old-fashioned wooden coaster and has a loop, plenty of hills and gorgeous views of Disney California Adventure Park and the mountains beyond! Ride it at night for the most dramatic tunnel views. 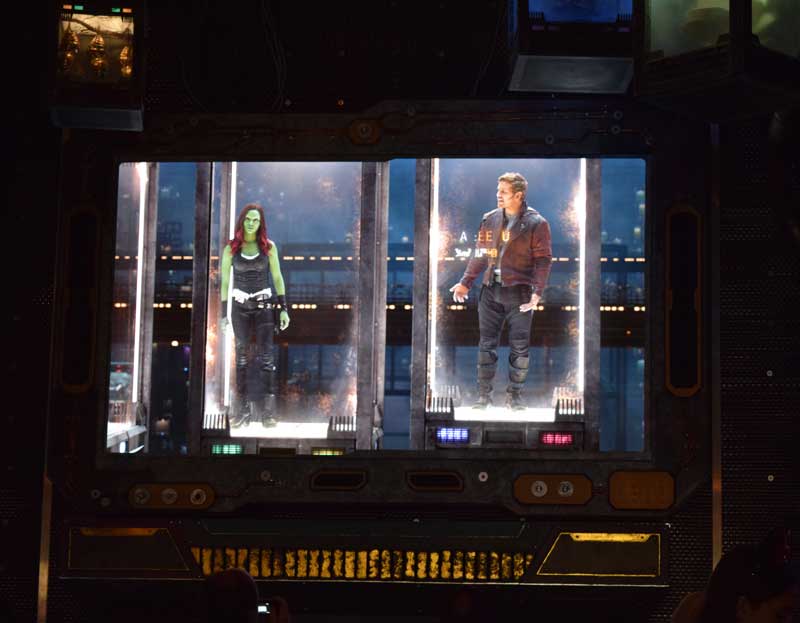 It was a tough call deciding between the looping Incredicoaster and Guardians of the Galaxy when ranking the top thrill rides at Disneyland Resort, but Guardians wins for the best themed queue, darkness, falling sensations, a changeable storyline and soundtrack and #BONUS it becomes the more terrifying, heavy metal Monsters After Dark ride after 5 p.m. on evenings during Halloween Time. There is something thrilling about a ride that keeps us guessing no matter how many times we ride!

When we initially heard they were taking away The Twilight Zone Tower of Terror and replacing it with a Marvel ride at Disney California Adventure, we all screamed in horror (OK, Tad was definitely intrigued). We mourned the loss of an old favorite … that is, until we rode the new one!

Step into Collector Tanaleer Tivan’s private collection of living beings and artifacts from throughout the universe. You’ll see that he has captured the Guardians of the Galaxy. They aren’t happy about it, but Rocket escapes and needs your help in freeing his friends and everyone one else in that “freakshow” (his words, not mine). He’ll tell you all about it before you board the Gantry Lift and give him access and security clearance. This immersive ride is crazy fun and exciting with a rocking soundtrack, hilarious scenes and unexpected thrills. In fact, each ride offers one of six different songs.

Planning a visit to Disneyland? Check out our touring plans for Disneyland and Disney California Adventure. You'll also find tips and resources on where to stay, how to get there and what to do inside our Los Angeles Planning Guide. And don't froget to share your favorite thrill rides at Disneyland with us in the comments below!