What to Expect at Disneyland's Season of the Force 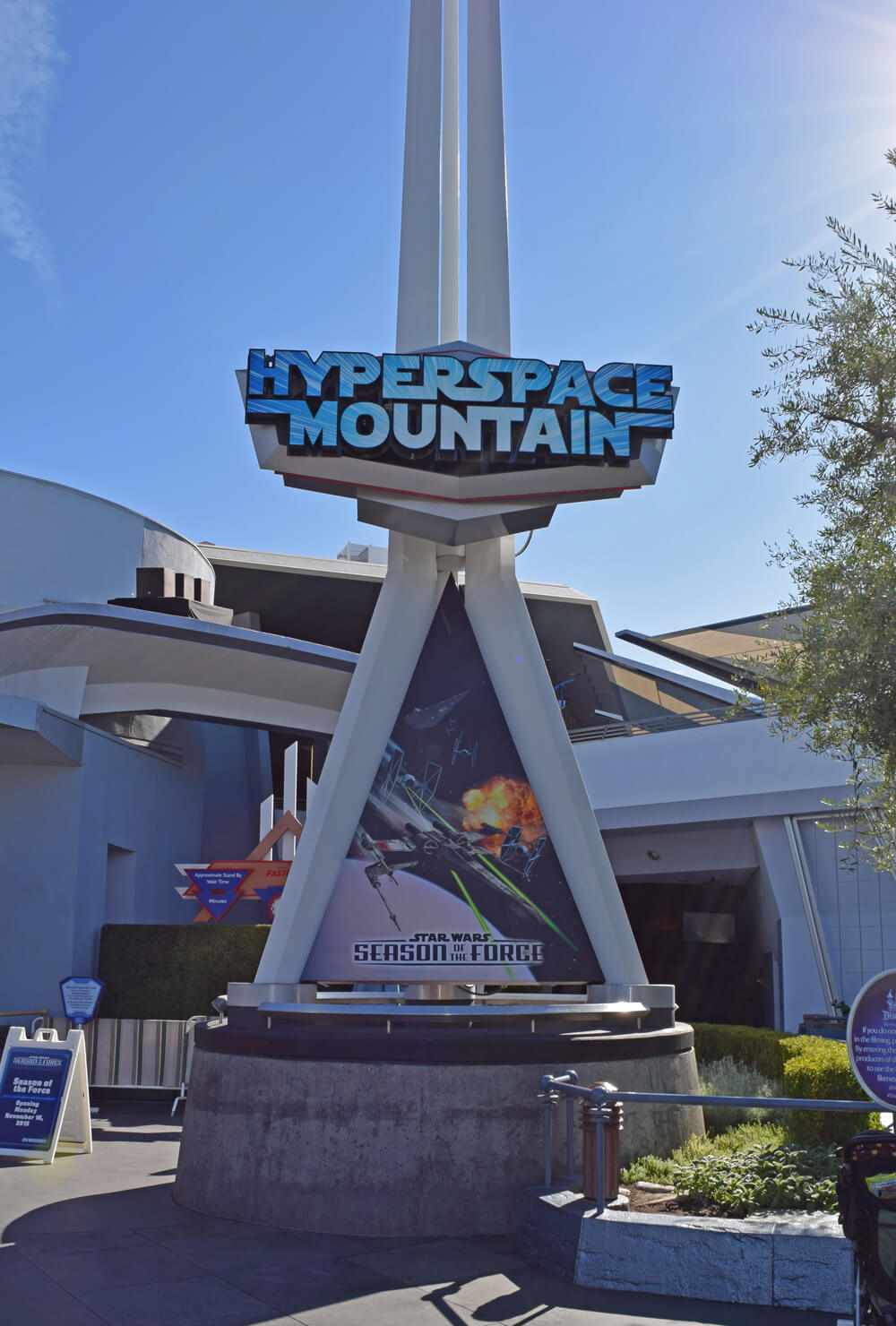 Not a long time ago in an amusement park far, far away (depending on how far you live from Anaheim), there was a land called Tomorrowland. And that land was overtaken by the dark side during Disneyland Season of the Force.

On Nov. 16, Disneyland launched new Star Wars attractions throughout Tomorrowland as it prepares to break ground on the new Star Wars Land (which will actually be built on the other side of the park). We don’t want to make you green with envy, but the Frog Family was “toadally” excited to be among the first in line to join the Force. Join along with our adventures below so you will be in the know when you visit!

What to Expect at Disneyland Season of the Force

The Battle at Hyperspace Mountain

As soon as the park opened, Tad and I immediately ran to Hyperspace Mountain to get a FastPass. Then we joined Mommy Frog and Lily in line for Launch Bay. On Hyperspace Mountain, you can join an X-wing star fighter battle in a temporary but exhilarating change (only around for the Season) to one of our favorite thrill rides, Space Mountain. Yeah, it’s worth the wait.

You Can Step into Another Galaxy at Star Wars Launch Bay 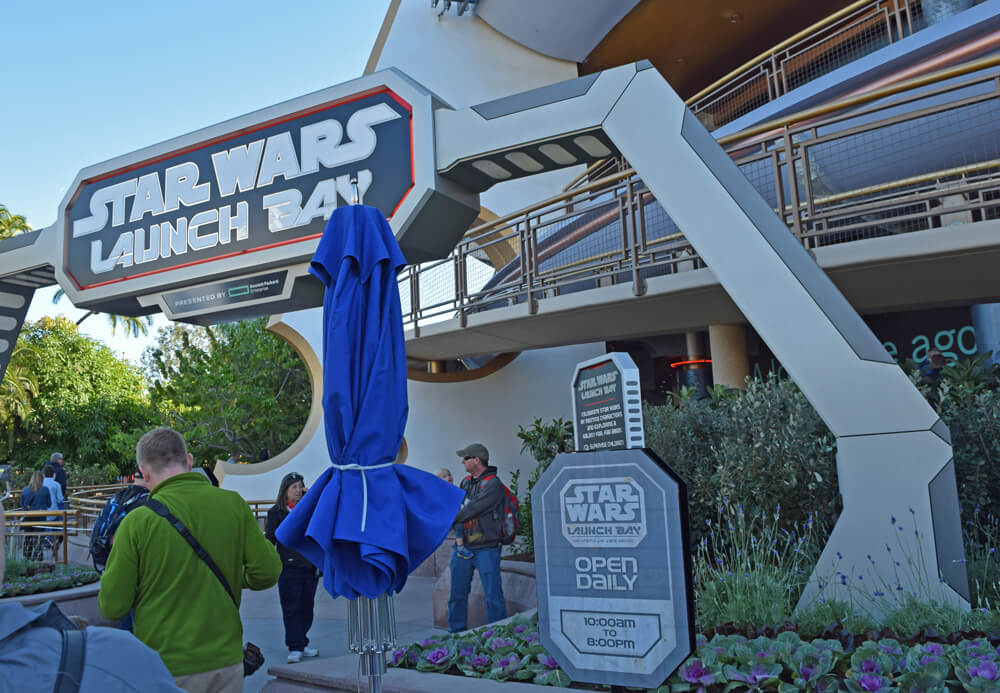 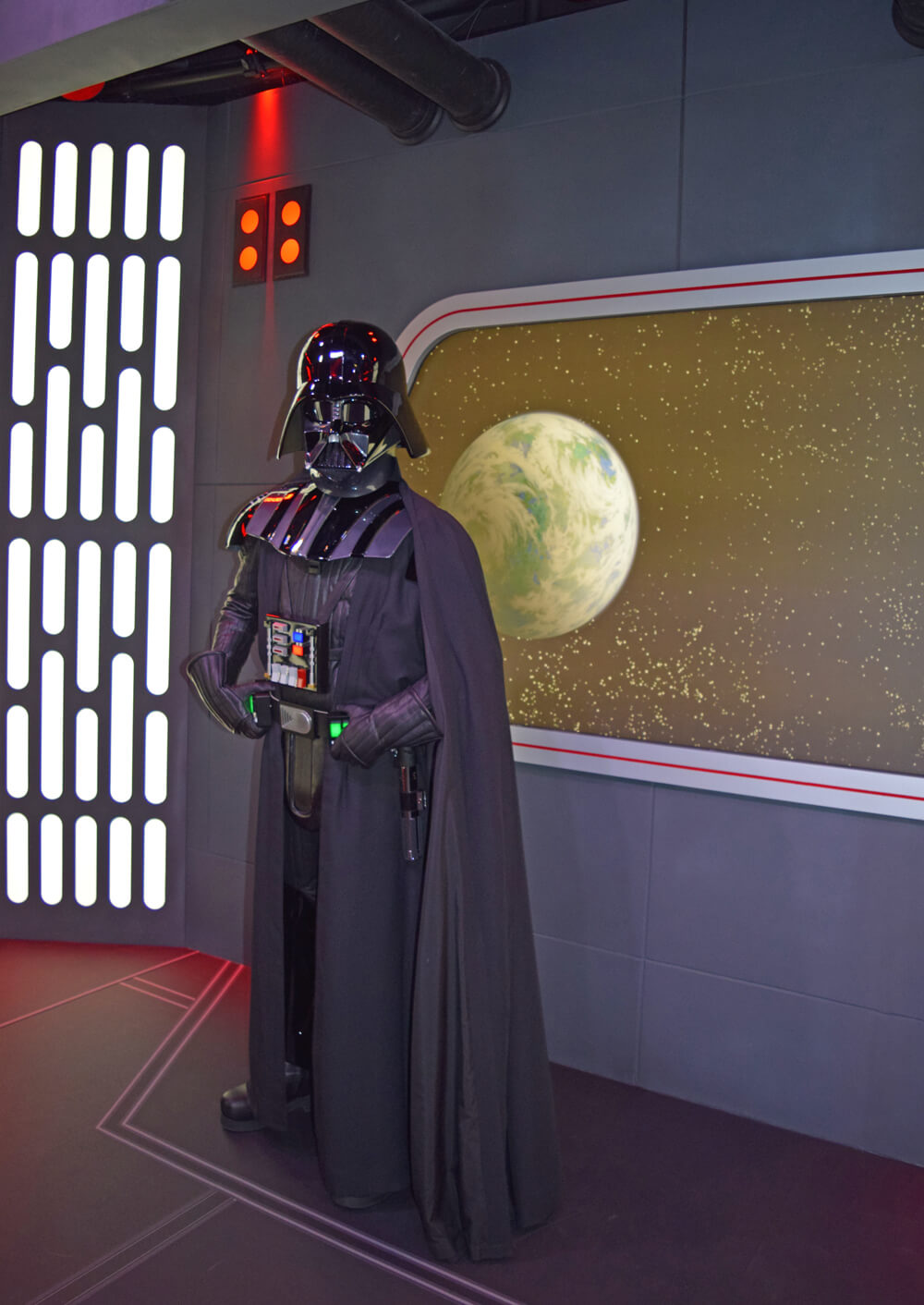 Do you want to be transported to a Death Star where you can meet Kylo Ren, Chewbacca and see Star Wars movie memorabilia? Then hop into the Star Wars Launch Bay. The House of Tomorrow is now a thing of the past as the bottom floor of Innoventions was transformed into the Launch Bay. Darth Vader was greeting guests at this location, but as of now, the only way to catch him is at the Jedi Training (see tips here).

Launch Bay is now a separate attraction (with its own line and entrance) from the newly named Super Hero HQ on the upper floor of the former Innoventions building, where you can still meet Thor and virtually try on Ironman’s suit. They’ve added Spider-Man to the Heroes you can meet and greet. Parents of teen boys take note: We may have to add both of these attractions to Tad’s post on his favorite things to do at Disneyland. By the way, Super Hero HQ had significantly shorter lines. Both attractions are open from 10 a.m. to 8 p.m. most normal operating days. 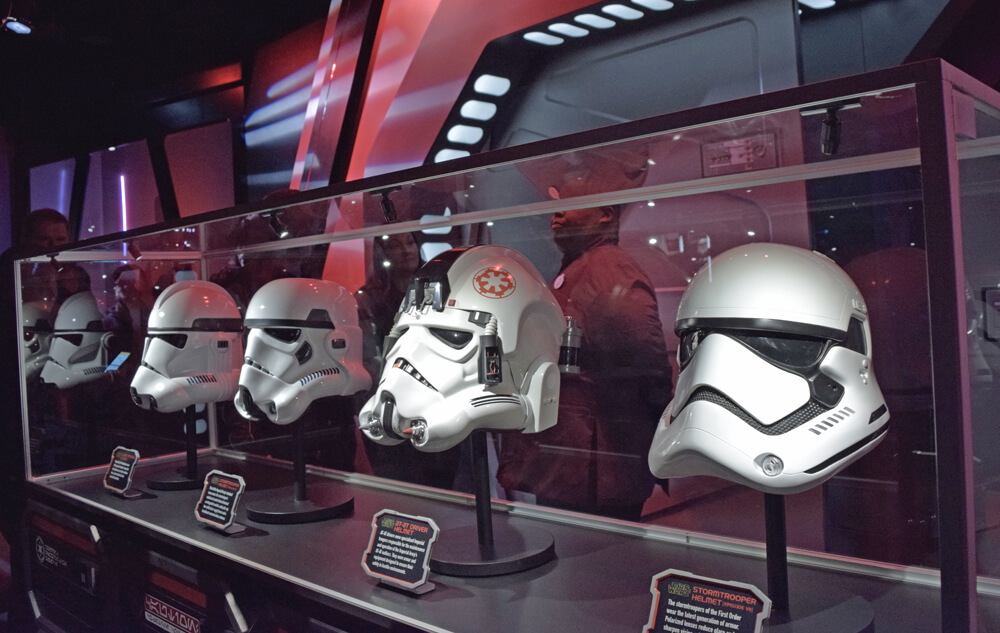 But I digress; back to Launch Bay. The line to get in eventually splits into three choices. Be prepared to make that choice. You can meet Darth Vader, meet Chewbacca or just tour the movie memorabilia at Launch Bay. If you choose to meet a character ,you will exit into Launch Bay and still also get to explore that entire attraction. If you choose just Launch Bay, then you will not be meeting any characters without exiting and getting back in line. We met Darth Vader, whose line was slightly longer later in the day. As a bonus we saw some Storm troopers lurking around at the entrance to Launch Bay. 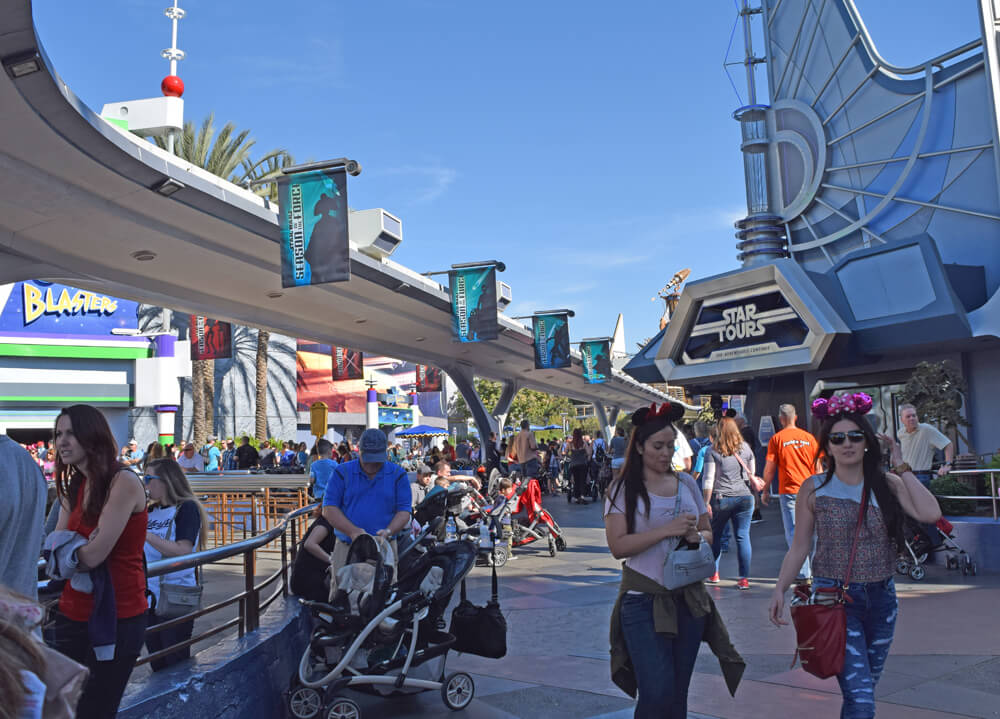 There is a new land being added to Star Tours—The Adventure Continues. On November 16, every tour during the Season of the Force will include a new adventure from the new film, Star Wars: The Force Awakens. Once the season ends, the new scene will be added permanently into the mix of existing random adventures, making 72 possible ride experiences. 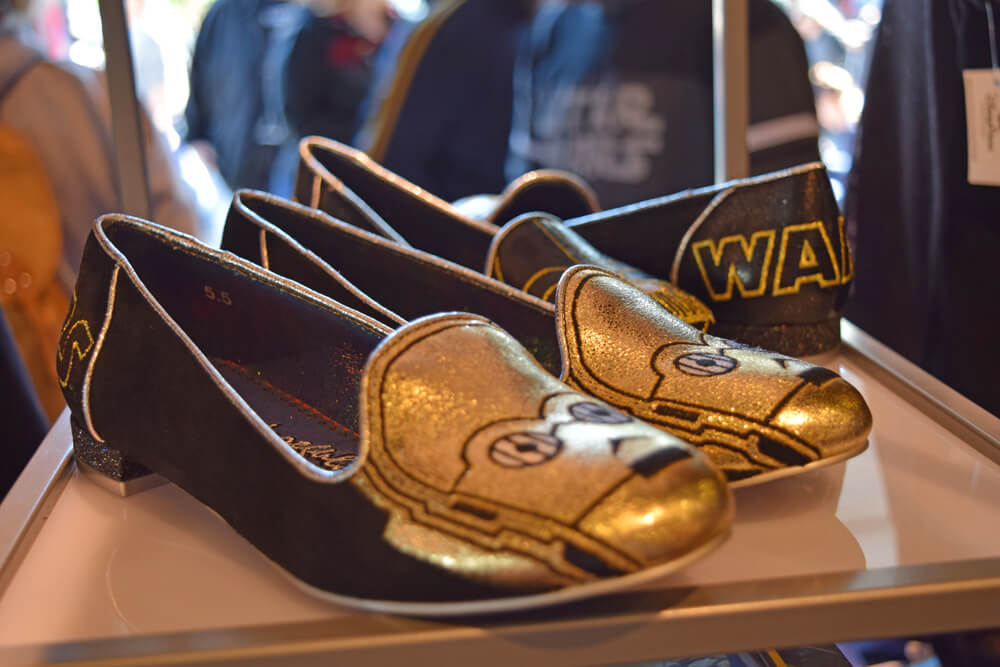 After you exit Star Tours, do some Star Wars shopping. The entire gift shop is now Star Wars themed. The force has affected your snacking too. Just outside of Star Tours you can get a fighter ship souvenir popcorn bucket for $19.50

Whether you are a die-hard Star Wars fan or someone whose entire experience with Star Wars has been limited to past trips on Star Tours, you will enjoy this new 10-minute presentation in the Tomorrowland Theatre. It will feature scenes from films in the Star Wars saga.

Your little Padowans (ages 4 to 12) can join in the new Jedi Training: Trials of the Temple. Young Jedis in training will take on Darth Vader as well as a new villain from the Star Wars Rebels series. No more anxiety worrying if your tadpole will be picked for Jedi training. There is a new system in place. Now you can sign up for an available spot in advance. The available Jedi training spots for each show time fill up quickly, so be sure to sign up right when you arrive at the park. The sign-up and meeting spot is near the exit to Star Wars Launch Bay.

Embark on a Culinary Adventure 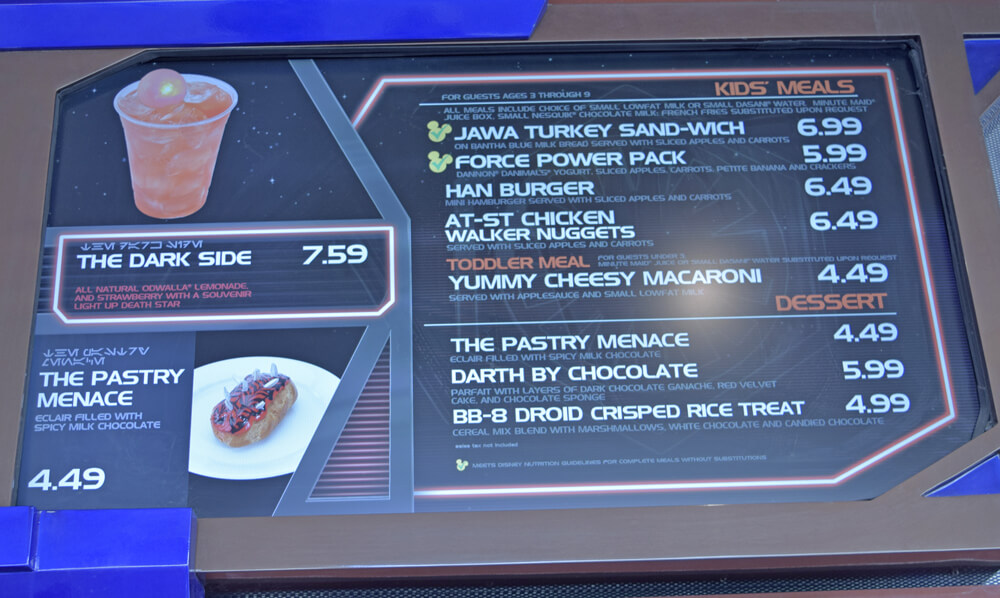 The food in Tomorrowland is now Star Wars themed.

Tomorrowland Terrace has been blasted into space. In its place is the Galactic Grill, with some new entrees, drinks and desserts (Darth by Chocolate anyone?). Same with Pizza Port where you can try Dark Side Chicken Curry pizza and healthy fare like the Fields of Naboo very colorful salad. There are some very popular droid sippers, Chewbacca steins and light saber drinks throughout the land as well. The popcorn bucket space ship is one hot item. Get in line early for that one. You can also eat cotton candy out of Darth Vader’s head if that thrills you.

Make a Touring Plan for the Season of the Force 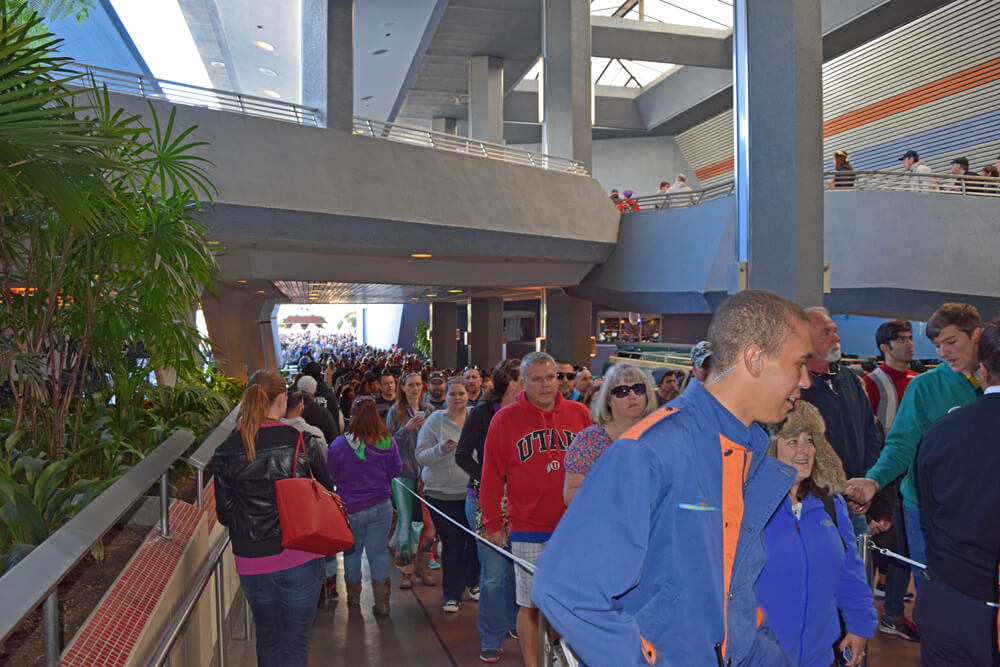 Thousands of Star Wars fans showed up on a brisk Monday morning before the park opened to be among the first to experience the Season. The majority of the crowd headed straight for Hyperspace Mountain. We recommend getting a FastPass for that one right away, then go ride Star Tours early. Stop and buy a Star Wars-themed snack to sustain you while you wait for Launch Bay, keeping your eye on that FastPass time—you don’t want to miss that window! If your FastPass time is looming in the next hour, check the wait times for Launch Bay and decide if you would be better served to do some Star Wars shopping or watch the Path of the Jedi first before riding Hyperspace Mountain and THEN hitting Launch Bay. As time goes on we expect the crowds to quiet down a bit.

While we know when the season begins, Disney has not yet announced the end of the season. Star Wars fans who can’t wait for Star Wars Land to be built better jump to lightspeed into this new galaxy before it converts back (sometime in the land of tomorrow). For now, if you are visiting by Jan. 10, 2016, check out our top ten things to do at Disneyland before they close for the building of Star Wars Land.

Who's excited about all of the changes at Disneyland? What questions do you have about Disneyland Season of the Force? Share your thoughts and questions in comments below. May the force be with you!