EPCOT International Festival of the Arts is filled with culinary masterpieces, impressive acrobatic performances, marketplaces selling magnificent works of art and opportunities to let out your inner artist. What makes this festival my absolute favorite, though, are the nightly concerts starring performers from the Great White Way. The DISNEY ON BROADWAY Concert Series is a Festival of the Arts staple. Every year, new and returning singers perform show-stopping numbers from Disney's beloved musical catalog. Whether you've seen a DISNEY ON BROADWAY show before or not, you're sure to recognize some tunes at any one of these performances. Anxious to hear more? I'm breaking down everything you need to know about this acclaimed concert series! 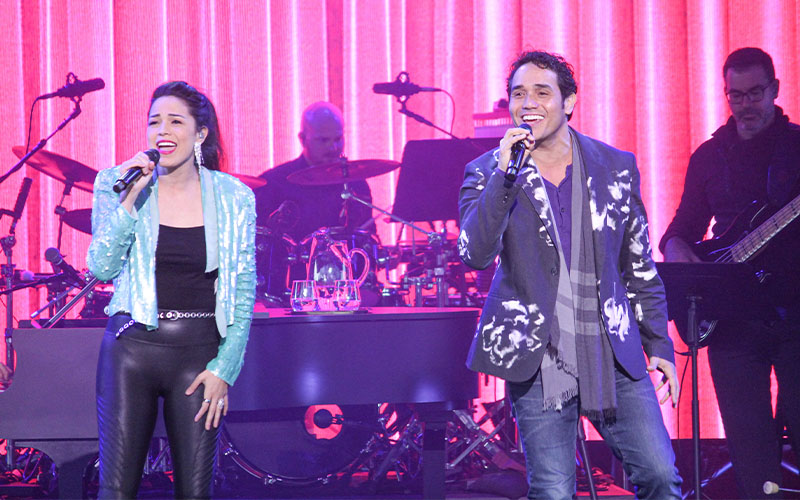 Overview of the DISNEY ON BROADWAY Concert Series 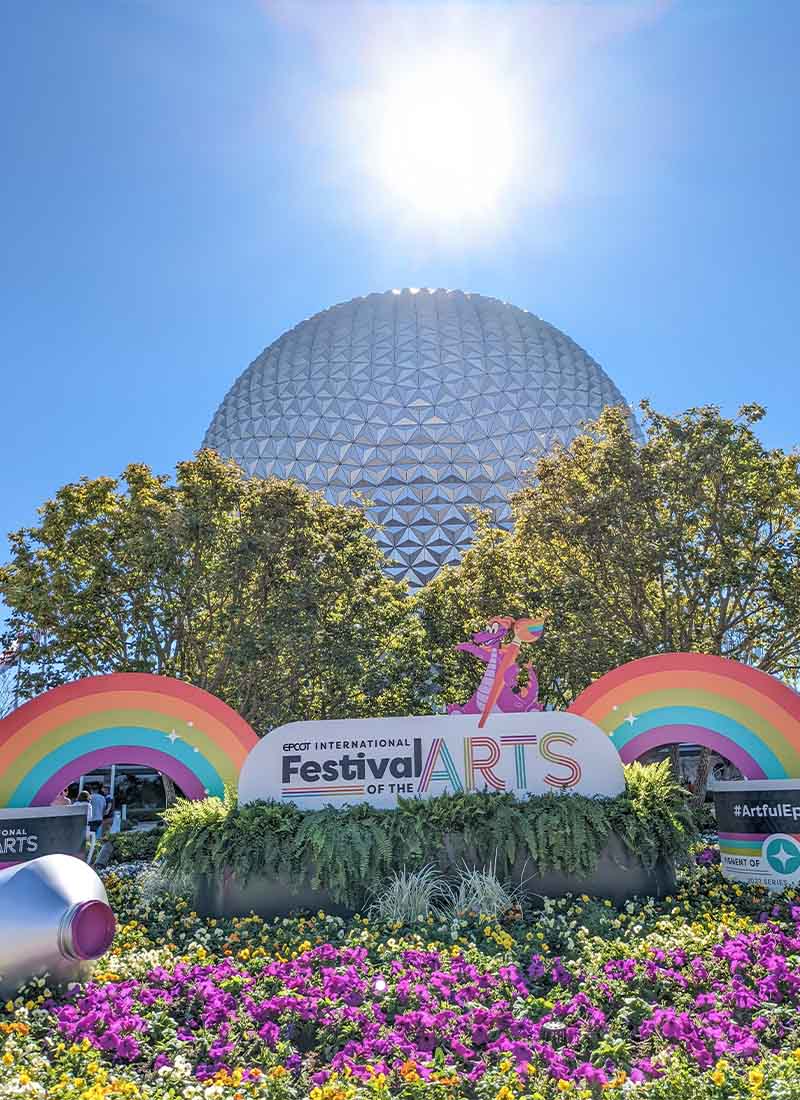 The DISNEY ON BROADWAY Concert Series takes place every night during the EPCOT International Festival of the Arts which runs this year from Jan. 13 to Feb. 20, 2023. There are three performances each night at 5:30, 6:45 and 8 p.m. Just like all of EPCOT's iconic concert series, you'll be able to catch these talented Broadway performers at the America Gardens Theatre in the American Adventure Pavilion. Each performance lasts just under half an hour.

The majority of these concerts feature two performers who have starred in at least one DISNEY ON BROADWAY show in New York City. Each pair of performers take the stage for about two weeks. However, these pairs switch out every one to two days, so make sure that if you want to see someone in particular, you've booked a park reservation for a date they'll be performing. Here's who you'll find gracing the America Gardens Theatre stage this year: 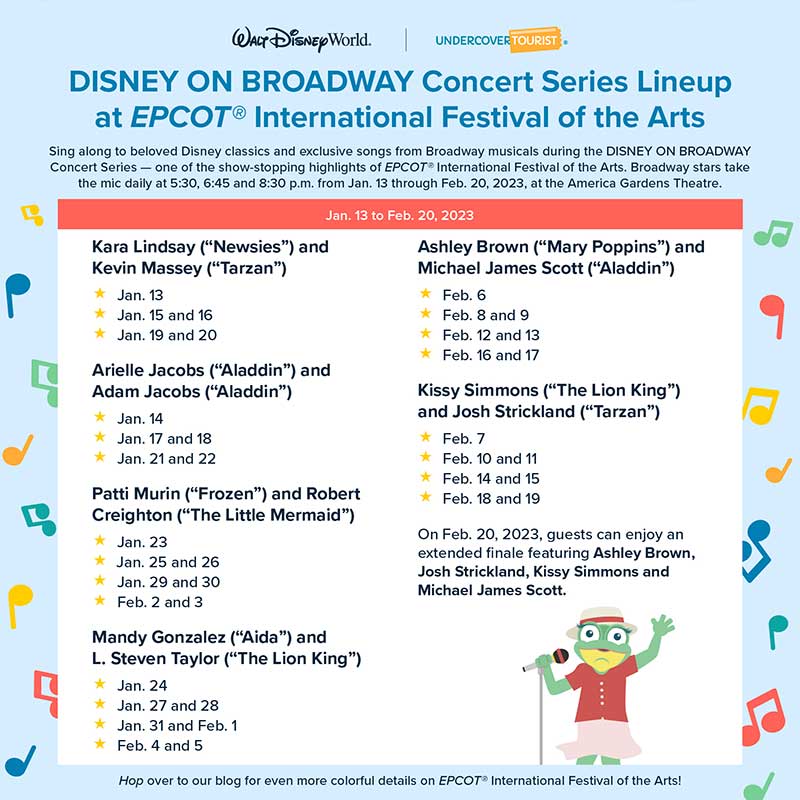 Who are these talented Broadway stars and what songs can you expect to hear from them? No need to grab a Playbill! I got all the info you need right here.

Kara Lindsay made her DISNEY ON BROADWAY debut when she originated the role of Katherine Plumber in "Newsies" on Broadway (a performance you can watch on Disney+ in "Newsies: The Broadway Musical"). Since then, she's played iconic roles, including Glinda in "Wicked" on Broadway and on tour, Cynthia Weil in "Beautiful: The Carole King Musical" on Broadway and even Mary Poppins in "Mary Poppins." This is Kara's fourth year at the Festival of the Arts, having graced the America Gardens Theatre stage in 2018, 2020 and 2021. Past residencies have included performances of "Watch What Happens" from "Newsies" and "For the First Time" from "Tarzan."

Kara's husband, Kevin Massey, made his DISNEY ON BROADWAY debut in the original company of "Tarzan" on Broadway as Tarzan's understudy. Since then, he's been in several other Broadway companies, including "Memphis," "A Gentleman's Guide to Love and Murder" and, most recently, "Wicked" as Doctor Dillamond. Kevin performed at the first annual Festival of the Arts back in 2017 and has returned three other times in 2018, 2019 and 2020. Past residencies have included performances of "Strangers Like Me" from "Tarzan" and "Out There" from "The Hunchback of Notre Dame." 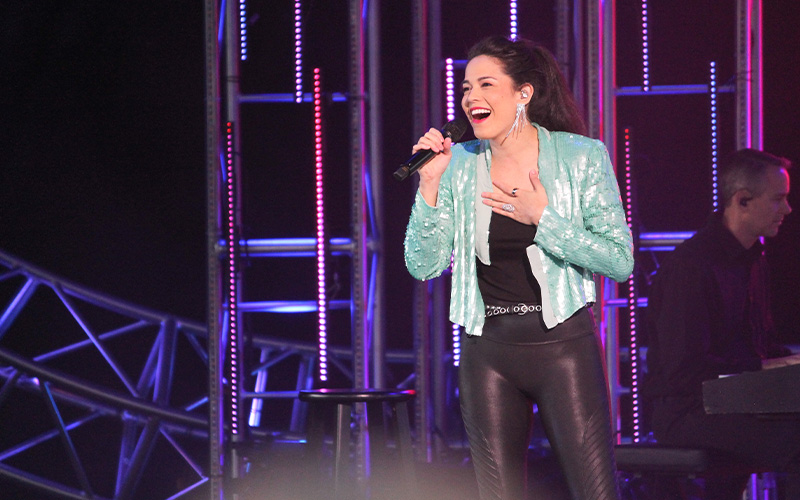 Arielle Jacobs made her DISNEY ON BROADWAY debut as Gabriella Montez in the national tour of Disney's "High School Musical." After that, she made her Broadway debut in "In the Heights" as Nina Rosario and went on to play roles such as Nessarose in "Wicked" on Broadway and the lovely Princess Jasmine in "Aladdin" both on Broadway and in Australia! This is Arielle's third year at the Festival of the Arts, having performed in both 2019 and 2022. Past residencies have included performances of "These Palace Walls" from "Aladdin" and "Part of Your World" from "The Little Mermaid."

Arielle's brother, Adam Jacobs, made his DISNEY ON BROADWAY debut as Simba in "The Lion King" on Broadway. After that, he originated the role of Aladdin in "Aladdin" on Broadway! His impressive resume also includes the first Broadway revival of "Les Misérables" as Marius. This is Adam's fourth year at the Festival of the Arts, having graced the America Gardens Theatre stage in 2019, 2020 and 2022. Past residencies have included "Circle of Life" from "The Lion King" and "Proud of Your Boy" from "Aladdin."

Patti Murin made her DISNEY ON BROADWAY debut in the national tour of "Beauty and the Beast" as Belle. Since then, she's played iconic roles such as Princess Ariel in "The Little Mermaid" and Glinda in the first national tour of "Wicked." Most notably, she originated the role of Princess Anna in "Frozen" on Broadway! Patti is making her Festival of the Arts debut this year, but hopefully, we'll hear songs such as "Home" from "Beauty and the Beast," "The World Above" from "The Little Mermaid" and "True Love" from "Frozen."

Robert Creighton made his DISNEY ON BROADWAY debut as Timon in "The Lion King" on Broadway. Since then, he's been in the Broadway companies of "The Little Mermaid," "Anything Goes" and "The Mystery of Edwin Drood." Most recently, he originated the role of Weselton in "Frozen" on Broadway. This is Robert's second year at the Festival of the Arts after making his festival debut in 2022. Last year, he performed songs such as "Les Poissons" and "Positoovity" from "The Little Mermaid."

Mandy Gonzalez made her DISNEY ON BROADWAY debut as Amneris' standby in "Aida" on Broadway. After coming back a year later to take over the role, she portrayed more beloved characters on the Broadway stage, such as Nina Rosario in "In the Heights" (a role she originated), Elphaba in "Wicked" and Angelica Schuyler in "Hamilton." Mandy is making her Festival of the Arts debut this year, but I'm so frogcited to hopefully hear her belt songs such as "Every Story is a Love Story" and "I Know the Truth" from "Aida."

L. Steven Taylor has a long and storied history with DISNEY ON BROADWAY. After joining the national tour of "The Lion King" back in 2005, he eventually joined the Broadway company where he has been understudying the role of Scar and understudying and playing the role of Mufasa on and off for years — even as recently as the show's Broadway reopening in 2021. This is also Steven's Festival of the Arts debut, but I hope to hear him perform songs such as "They Live in You" and "Be Prepared" from "The Lion King."

Ashley Brown made her DISNEY ON BROADWAY debut as Belle in "Beauty and the Beast" on Broadway but is most known for originating the role of Mary Poppins in "Mary Poppins" on Broadway and continuing to play the role on tour. She's also performed in classic musicals such as "Oklahoma!", "Hello Dolly!" and "My Fair Lady." Ashley is a Festival of the Arts veteran, having made her debut with the festival all the way back in 2017 and has come back every year since. Past residences have included performances of "A Change in Me" from "Beauty and the Beast" and "Monster" from "Frozen."

Michael James Scott made his DISNEY ON BROADWAY debut in the Broadway company of "Tarzan." Since then, he's performed in shows such as "Aida," "Mamma Mia!" on Broadway, "Hair" on Broadway and "The Book of Mormon" on Broadway. Most notably, he's been playing the role of Genie in "Aladdin" on Broadway, the West End and the North American and Australian tours. This is Michael's third year at the Festival of the Arts, having made his debut in 2020. Past residencies have included performances of "Go the Distance" from "Hercules" and "Friend Like Me" from "Aladdin."

Like Steven, Kissy Simmons is a beloved member of "The Lion King" family. Kissy made her DISNEY ON BROADWAY debut in the role of Nala in 2003 and went on to play the same role on the national tour and in the Las Vegas production. Like Ashley, she's performed at the Festival of the Arts every year since its inception in 2017. Past residencies have included performances of "Easy as Life" from "Aida" and "Shadowland" from "The Lion King."

Josh Strickland answered the call of the wild and made his DISNEY ON BROADWAY debut back in 2006 as Tarzan in the original Broadway company of "Tarzan." He also recently reprised the role in Germany. And, just like Ashley and Kissy, he's been performing at the Festival of the Arts since it began. Not only that, but since 2017, Josh and Ashley have graced the America Gardens Theatre stage together every single year. While they're pairing off with different partners this time, I'm beyond thrilled to see them performing together again in the grand finale performance on Feb. 20! Past residencies of Josh's have included performances of "My Strongest Suit" from "Aida" and "Her Voice" from "The Little Mermaid." 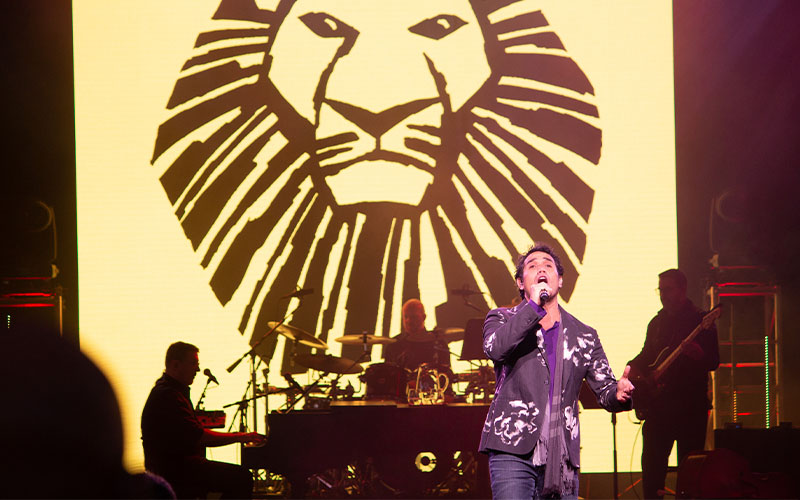 The DISNEY ON BROADWAY concert series is incredibly underrated. That also means not many parkgoers actually know it takes place during the festival. (I've had many fellow frogs over the years walk up to me in line and ask what everyone was waiting for.) That being said, it's much less popular than, say, Festival of the Holidays' Candlelight Processional and takes a lot longer to fill up. You can pretty much ensure a good seat if you arrive about 45 minutes prior to whichever performance you plan to attend.

If you don't want to worry at all about being able to grab a seat but don't mind splurging a little bit, you can also take advantage of the DISNEY ON BROADWAY Concert Series dining package. Enjoy a delicious lunch or dinner at one of eight restaurants around the World Showcase before attending a concert performance later that evening. Each package includes an appetizer, entrée and dessert or one full buffet (where applicable) and a nonalcoholic beverage, plus one guaranteed seat per person to a DISNEY ON BROADWAY concert held on the same day. Prices range from $35 at Regal Eagle Smokehouse: Craft Drafts & Barbecue in the American Adventure Pavilion to $95 (for adults; $36 for tadpoles) at Le Cellier Steakhouse in the Canada Pavilion. 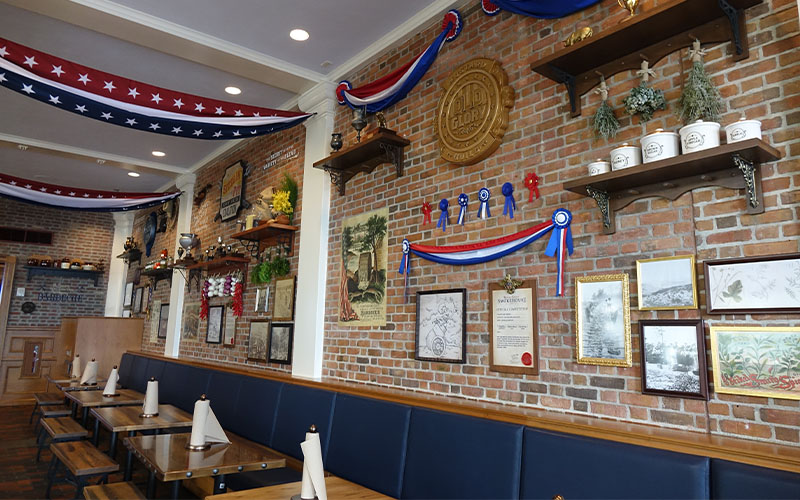 Advance reservations are highly recommended and can be made up to 60 days prior. However, you may also be able to purchase a same-day dining package, which allows you to dine without reservations, at Regal Eagle Smokehouse. To check availability, visit the restaurant on the day of your visit.

Anxious for a sneak peek of the concert series? Check out this year's performance with Kara Lindsey and Kevin Massey!

Have you been to a DISNEY ON BROADWAY concert before? Which performers are you most frogcited to see? Let me know in the comments below!

Related: Our Colorful Guide to EPCOT International Festival of the Arts 2023

SAVE $4 vs Adult gate price