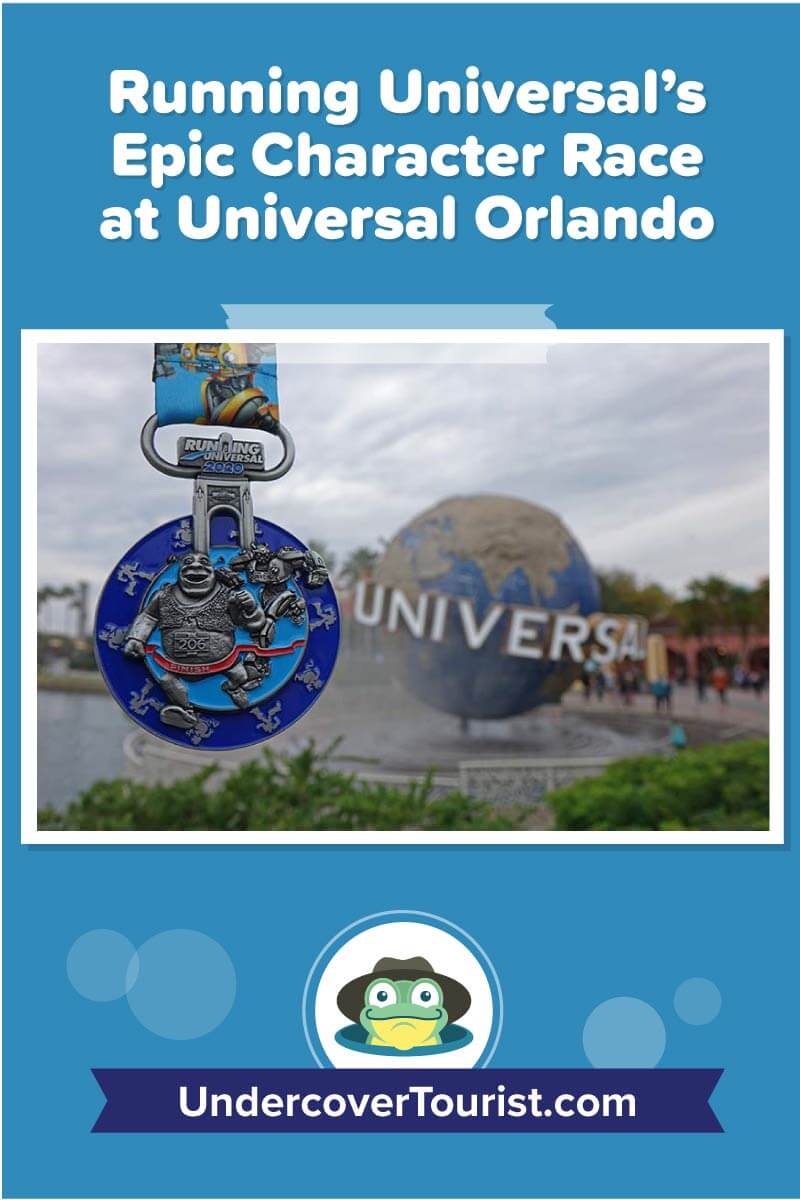 ‘Sup! Tad here. As a growing tween, Mommy Frog sometimes tells me I have too much energy. So when Universal Orlando Resort announced that it would be hosting its first-ever Running Universal event, Mommy Frog thought it’d be the perfect opportunity to introduce me to running and signed us both up for the 5K during early registration. It turned out to be a toadally rad race that let us experience the Universal theme parks in a whole new way. From character meet and greets to team members cheering us on, I’ll share everything about my personal experience and what you can expect for future Running Universal races.

An Overview of Running Universal and Event Registration

Running Universal events actually started over on the West Coast at Universal Studios Hollywood last year, featuring Minions and Jurassic World-themed fun runs. Meanwhile, Universal Orlando kicked off its inaugural Epic Character Race weekend with 5K and 10K races on Feb. 1 and 2, 2020. These races took place throughout Universal Orlando Resort property, including the theme parks and backstage areas, and were designed for tadpoles (who had to be 5 years old by race day) and frogs of all skill levels!

Both courses started out of the Volcano Bay parking garage. Once inside the theme parks, the 5K race snaked its way through Toon Lagoon, Marvel Super Hero Island and Seuss Landing in Universal’s Islands of Adventure and San Francisco, the London waterfront, World Expo, Springfield, Hollywood, Production Central and New York in Universal Studios Florida. 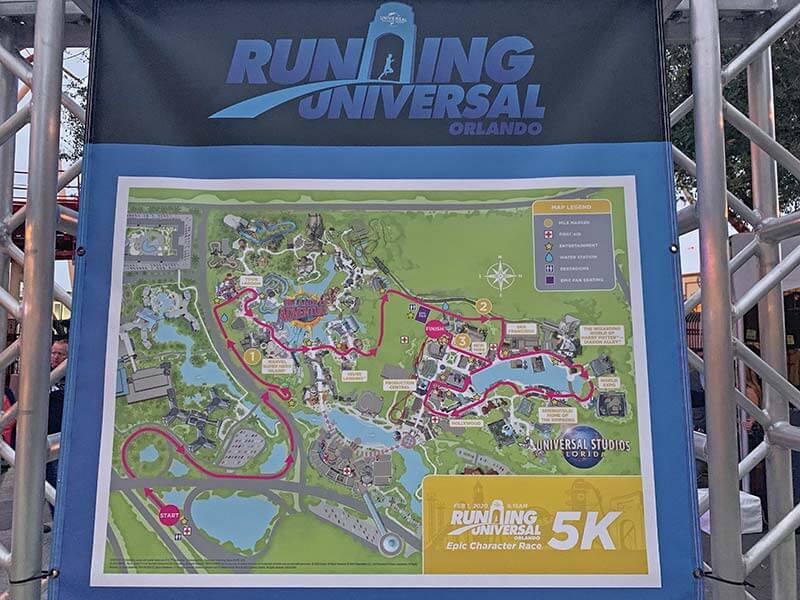 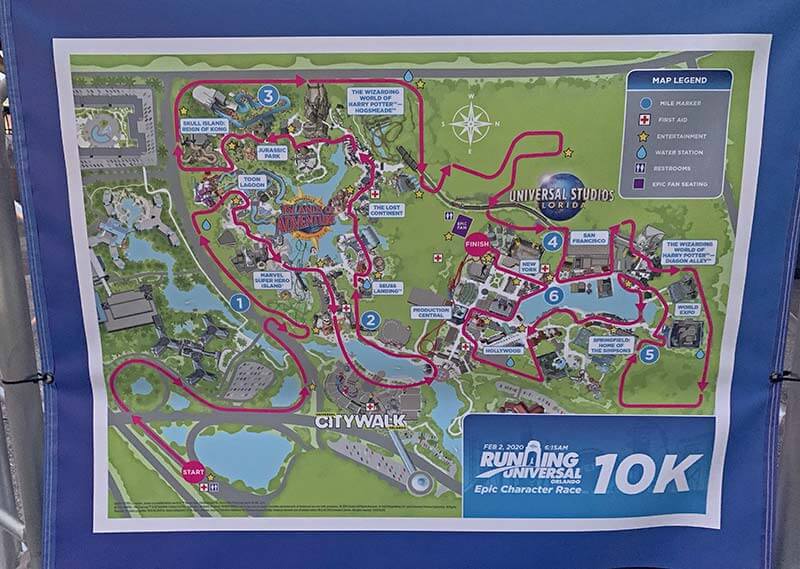 Registration started back in October with discounted prices during an early registration period that lasted until Nov. 2, 2019. You could register online anytime until Jan. 29, 2019. Normal registration cost $82 for the 5K and $121 for the 10K. This price included the race bib, a themed medal, a Dri-fit T-shirt, a drawstring bag, on-course and post-race refreshments, a downloadable finishers certificate and complimentary parking. There was also a VIP option that included a post-run breakfast and other exclusives, as well as an Epic Fan viewing option for your personal cheerleaders. Strollers are not allowed on the course, so Dad and Lily cheered for us by the finish line in the Epic Fan area.

No future races have been announced yet, but based off the successful lineup of races at Universal Studios Hollywood, we’d expect to see more Orlando events to take flight in the future!

Universal organized packet pick-up periods during the final days leading up to the race weekend. This was when we checked in for the race and dropped off our signed waivers before receiving our race bibs (along with safety pins for fastening them on our clothes), T-shirts and drawstring bags. We even got a selfie with Woody the Woodpecker for the very first character photo-op of the event! Additional Running Universal-themed T-shirts, water bottles and gear were available for purchase.

Mommy Frog encouraged me to train with her a few times before race day, and I’m glad I did! I’ve always completed mile runs with ease during P.E. class at school, but 3.1 miles was a longer distance than I expected on my first try. Race participants can walk, jog or run, but they need to keep at least a 17-minute per mile pace. To prepare for the big day, we followed Universal’s hopful tips for pacing ourselves. On race day, I felt confident enough that I could finish it!

Side note from Mommy Frog: I’d recommend taking your younger tadpoles out on a trial run before signing up if you’re unsure that they can handle the distance. That way, the tadpoles don’t complain about their legs hurting after only the first mile. I emphasized to Tad that it’s better to go at a consistent pace than to burn out all your energy at the beginning. Overall, it’s supposed to be a fun race! You don’t need to worry about your race time. It also helps that the character meet and greets give you short breaks to recoup along the way. 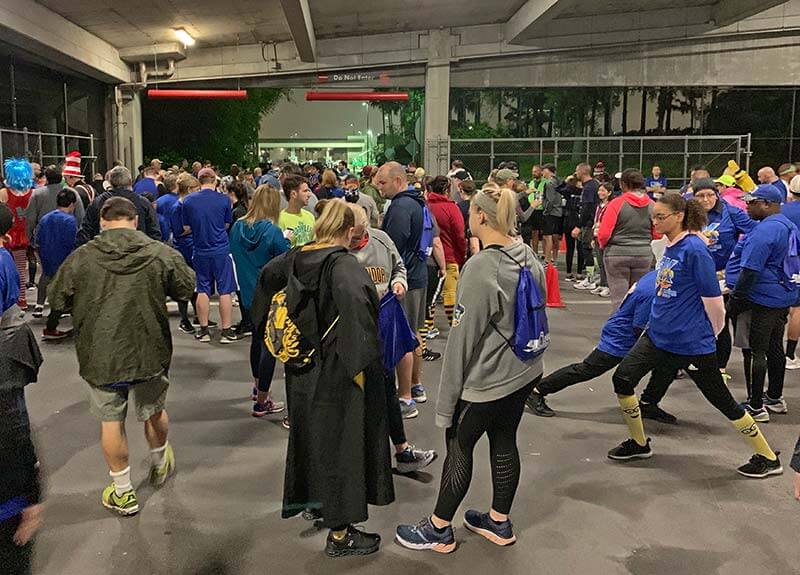 The hardest part of my race day was hopping out of bed at 4:30 a.m. Universal recommended arriving about 45 minutes before the race’s start time. This allowed time for parking, getting through security, taking a last-minute bathroom break and stretching. At exactly 6:15 a.m., the race began! 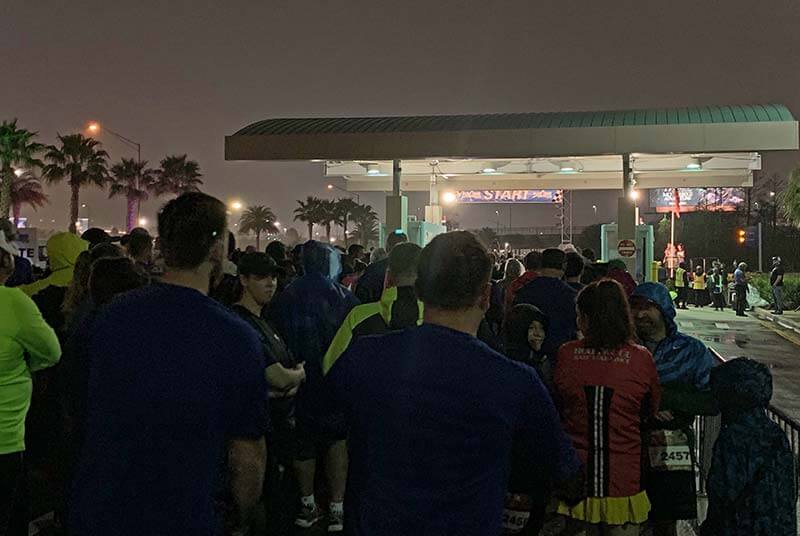 It was a little rainy during these early morning hours, but Universal did a good job at marking slippery areas throughout the run. At the start of the course, parts of Universal Blvd. and Hollywood Way had to be blocked off, but the remainder of the course stayed inside the theme parks and backstage areas. (Since it was so early, it did not affect traffic for regular park-goers.) The mile markers featured different characters and kept track of the race time. Shortly after the first mile, we finally entered Universal’s Islands of Adventure into Toon Lagoon and passed by an enthusiastic DJ. 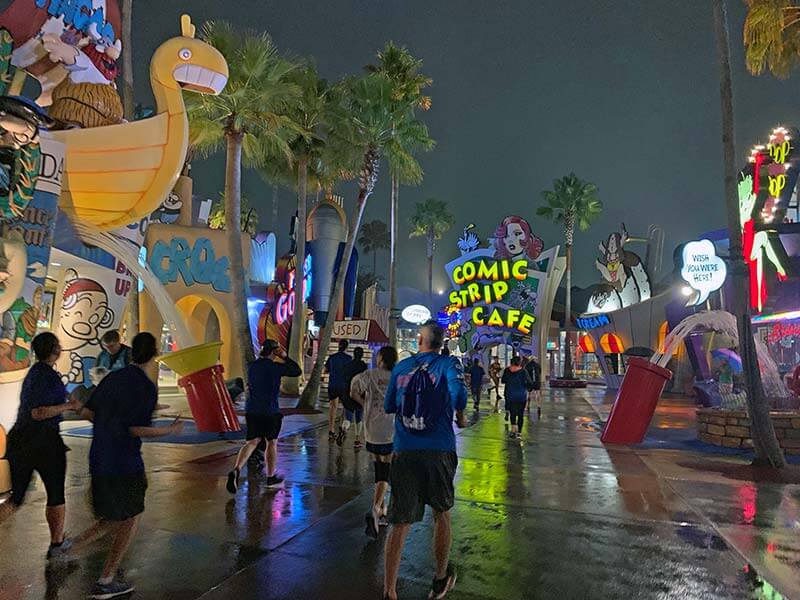 It’s toadally awesome running through a nearly empty park with only your fellow racers and team members cheering you on! Upbeat music played through the speakers, and my adrenaline kicked in again. As we ran through Islands of Adventure, we stopped to pose with Puss in Boots and Whoville citizens. A team member and a photographer were there to capture the moment. We somehow missed Betty Boop, Popeye and Olive, but other runners who we chatted with later mentioned seeing them as well.

After passing through Seuss Landing, we entered backstage for a bit. It was super cool to run underneath the tracks of the Hogwarts Express — a sight I’ve never seen! We entered Universal Studios Florida by Fast and Furious to start the last mile. The course took us around the lagoon which had its colorful fountains turned on. We stopped to say hi to the Knight Bus conductor and Shrek and Donkey, but we also saw Lisa Simpson, Mardi Gras jesters, Optimus Prime and Bumblebee, the Blues Brothers and Hashtag the Panda along the way. 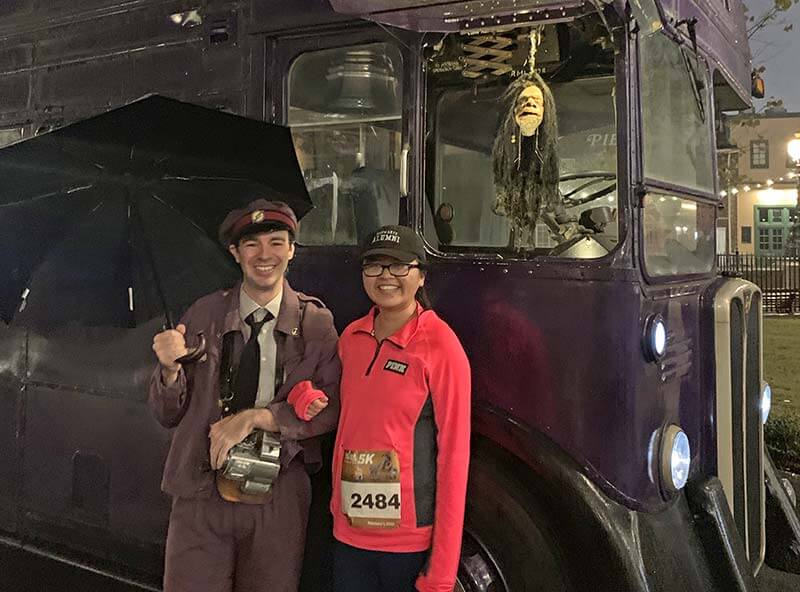 As I crossed the finish line, I put my hands in the air victoriously! Later, Universal sent us a link that allowed us to view the photos that the Universal photographers took, as well as a video of us crossing the finish line, with the option to purchase them. Race results were also posted online about a day after, so we could see how well we did.

After all that hard work, team members handed out medals to everyone who finished the race. They also gave us bottled water, a banana and a snack box that included an applesauce pouch, a Kashi granola bar, a bag of pretzels and trail mix. 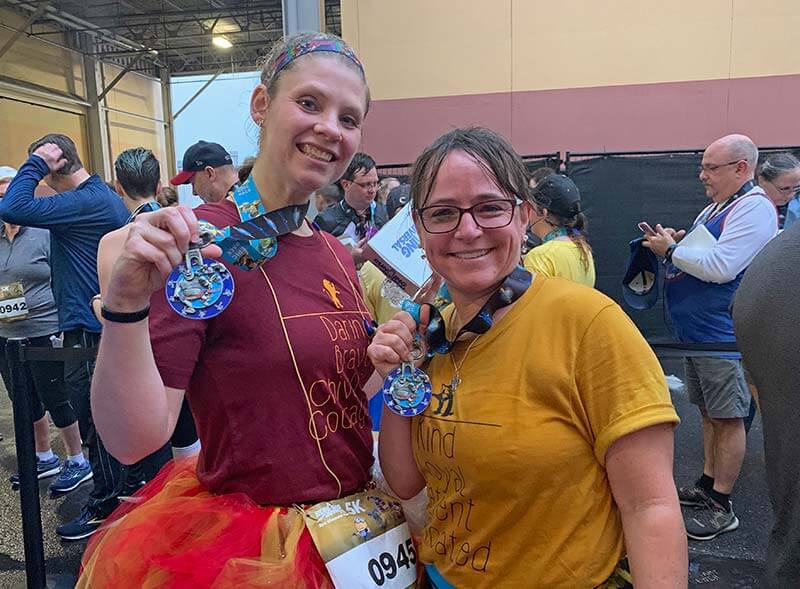 For the final two photo opportunities, Alex from "Madagascar" and a Minion separately congratulated runners. The Minion gave me a huge high-five, and I proudly posed with my medal. 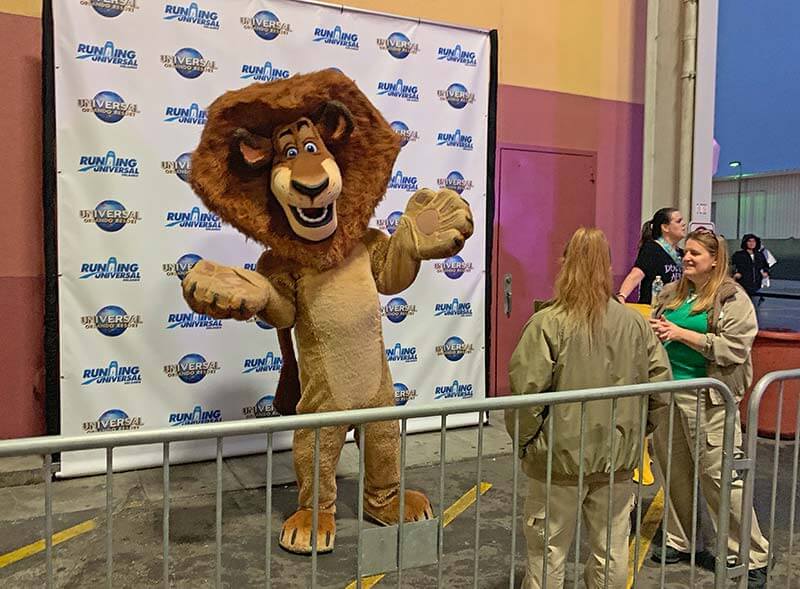 Overall, we really enjoyed the inaugural Epic Character 5K event, and hopfully there will be many more to come. We loved seeing fellow runners in costumes, ranging from banana suits to Hogwarts house robes, or custom-made T-shirts. My favorite one said, "I turn into an ogre if I stop running." Running Universal delivered two fun-filled courses that allow you to experience the parks like never before. And now running has become a new hobby of mine (maybe Mommy Frog will stop saying I have too much energy), so I would encourage you to go for it if you've never done one before! The 5K especially acts as a great introduction to newbies. I told myself I will attempt a future 10K if that means I get to run through the Wizarding World of Harry Potter next time. 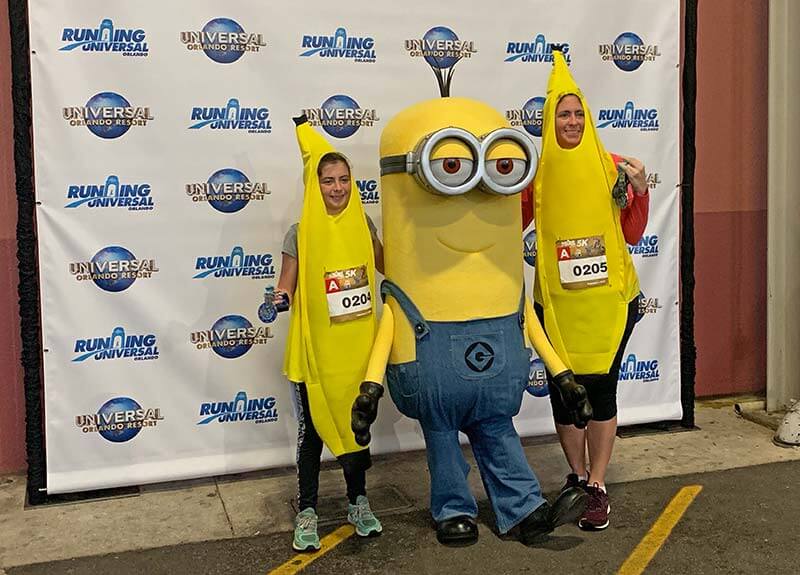 The inaugural Running Universal event was one for the books, and we're already keeping an eye out for future race announcements. Stay tuned!