Our ~Grinchy~ Guide to Christmas at Universal Studios Hollywood

It’s never too early to start thinking about how you want to spend the holidays! Our frog squad looks forward to our tradition — celebrating Christmas at Universal Studios Hollywood at the beginning of the holiday season! Each year, we time our visit to occur on the opening weekend of Grinchmas so we can enjoy the Holiday Who-bilation and then hop over to The Wizarding World to experience the magic of the holiday season in Hogsmeade. This year's holiday festivities will begin Nov. 25, 2022, and continue through Jan. 1, 2023! 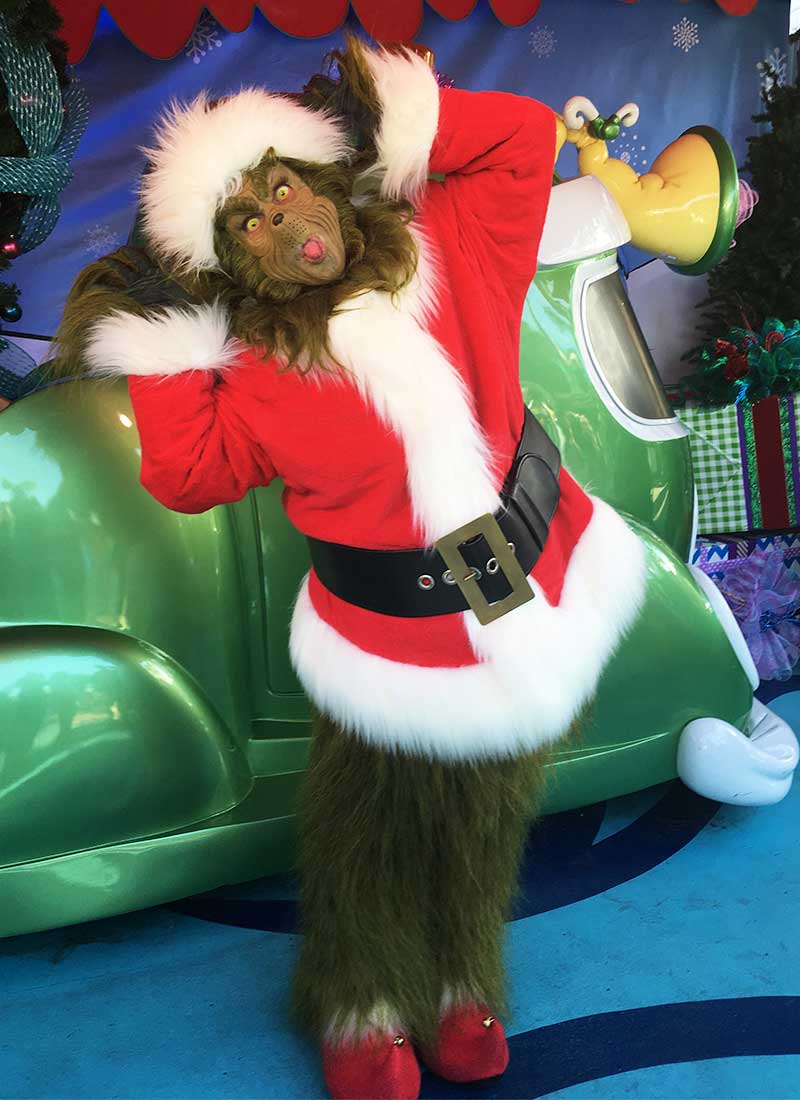 Overview of the Holidays at Universal Studios 2022 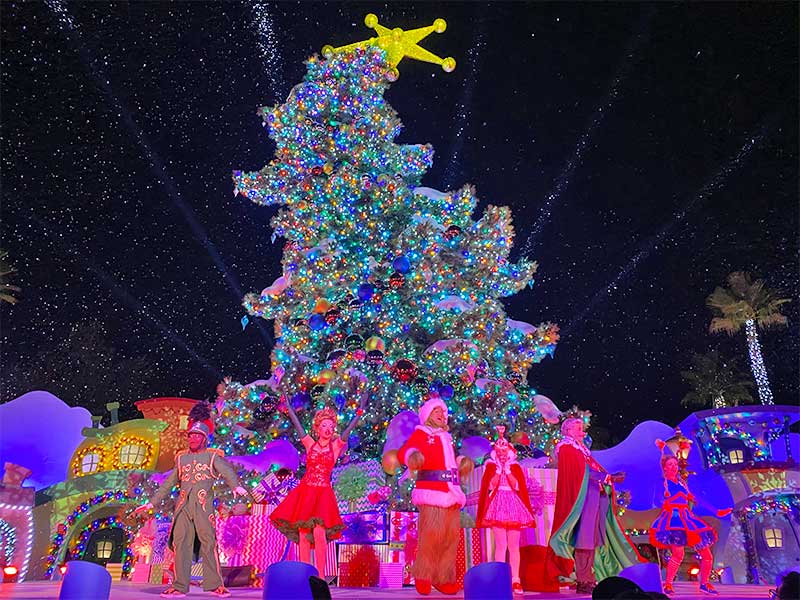 In 2022, both Grinchmas and the magic of the holiday season in Hogsmeade will run daily from Nov. 25, 2022, to Jan 1, 2023. With shows, decorations and delicious food, there are so many fun holiday experiences for the Universal Studios Christmas celebration! Here's a look at what to expect when the old Grinch sleighs into Whoville. Check the calendar before you visit to confirm park hours! Nights on which the park stays open until at least 7 p.m. or 8 p.m. include more showtimes.

You’ll find all of Universal decorated for the holiday season, with colorful lights, bows, ornaments and even a dusting of snow. Look for themed Christmas trees throughout the park, from dinosaurs to wizards and minions to Seuss-ian! Your favorite characters don their Santa hats or ugly Christmas sweaters and scarves to greet guests. And behold the merry (and mischievous!) minions, who also help you get into the holiday spirit.

If you have not visited since the park reopened after the pandemic, you'll have a new ride to celebrate. The Secret Life of Pets: Off the Leash! is open, plus Jurassic World — The Ride has a new and terrifyingly exciting ending. Be sure to add these to your list of must-do rides.

Our hearts always grow three sizes when we visit Grinchmas and Christmas in Hogsmeade. Hold onto your wizard hats and join us for the complete guide to Universal Studios Christmas 2022. 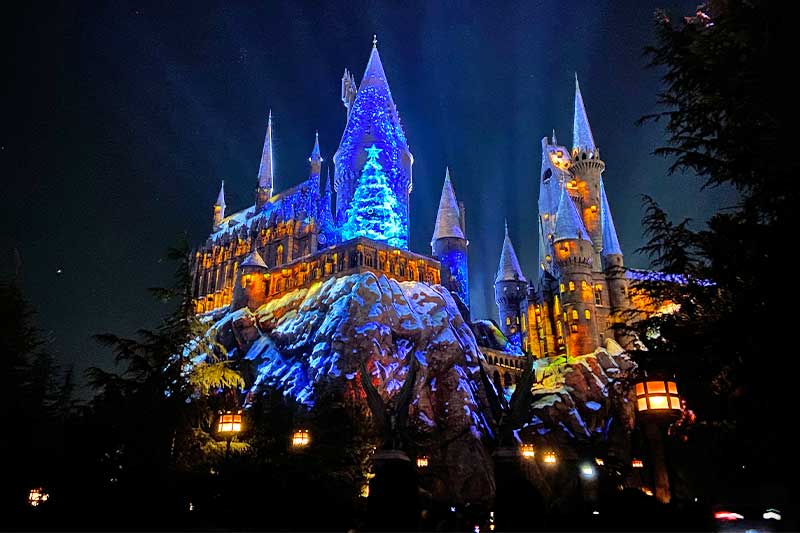 In the "Harry Potter" books and movies, Harry wakes up on Christmas morning to gifts that magically appear at the foot of his bed. Hogsmeade is covered with snow and decorated with greenery and enchanted candles. Harry experiences his first-ever Christmas feast of roast turkey and mounds of side dishes and other goodies ... and now, so can you! Here’s your chance to magically transport yourself to The Wizarding World of Harry Potter this season! You’d better add Universal Studios Hollywood tickets to your wish list this year so you can experience all of the Universal Studios Hollywood holiday events and magic too. 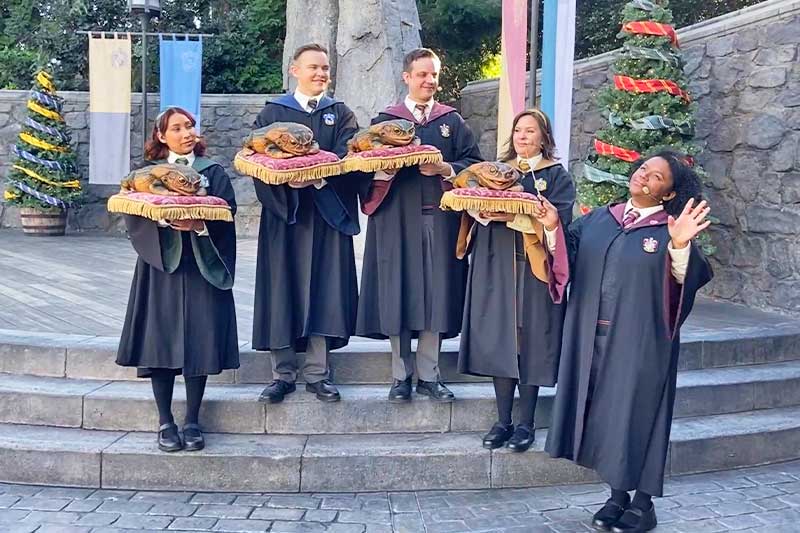 You do not want to miss one bit of this celebration, which runs daily. Here’s what to expect: 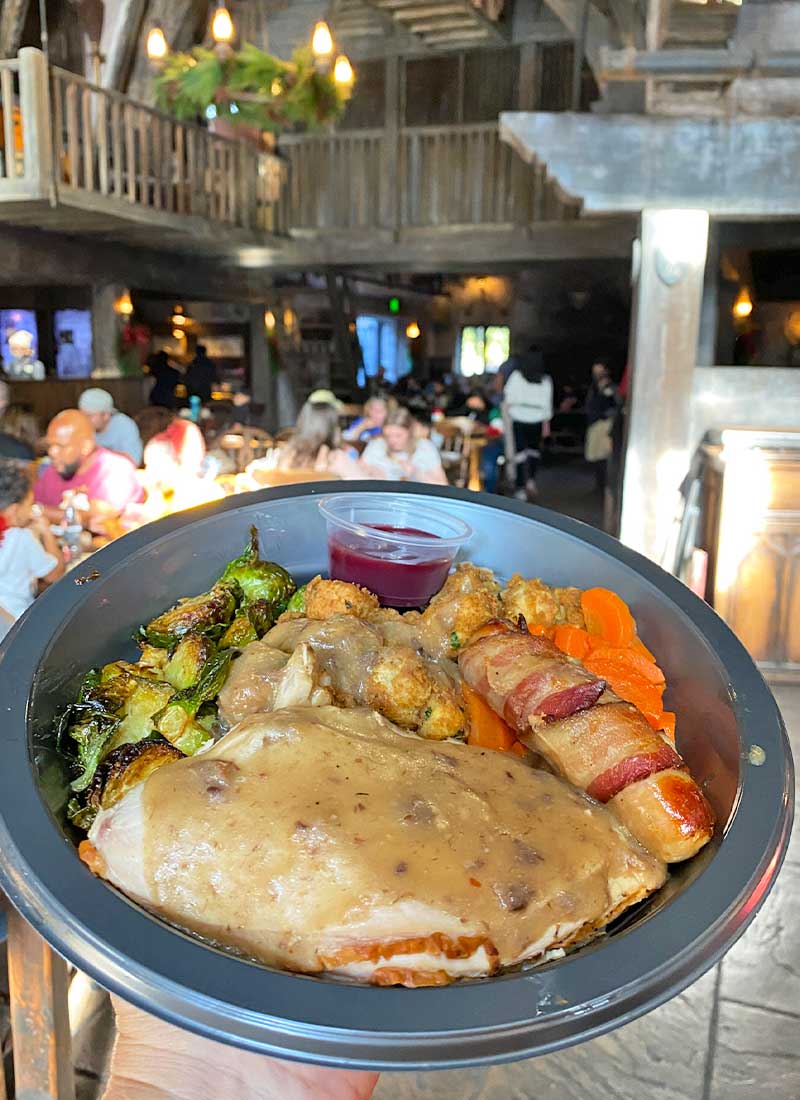 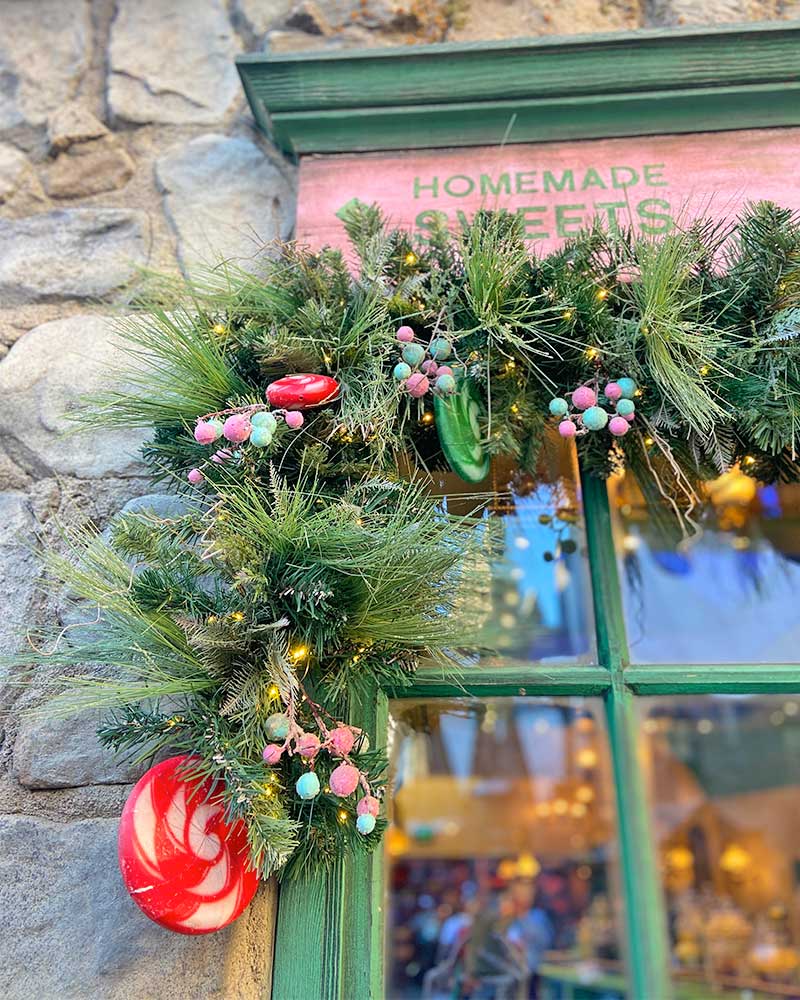 Universal no longer prints out showtimes, so you’ll need to ask team members in The Wizarding World for them. The Magic of Christmas at Hogwarts Castle showtimes may appear on the Universal Studios Hollywood app after 9:30 a.m. that day. Tap "Alerts" then the viewing information under "Park Updates" to see the show times. When we last visited, the castle show was expected to start at 6 p.m. and run every half an hour until park closing.

Regardless which showtime you choose, we recommend getting in place at least 30 minutes beforehand. For the best view, head straight to the stage where the Holiday Frog Choir performs so that you can take in the magical light show in its entirety! On peak days, Hogsmeade may reach capacity during the show, and team members may stop letting guests enter Hogsmeade.

Chances are, you'll want to see "The Magic of Christmas at Hogwarts Castle" show and also hop over to the Grinchmas tree lighting. Now, let's hop over to all of the naughty (and nice!) details of Grinchmas 2022!

Some of my hoppiest holiday memories involve reading and watching Dr. Seuss’ "How the Grinch Stole Christmas" as a young froglet. That’s why I am always just as frogcited as the kids to ring in the Who-liday season during Grinchmas. Here is the Who (get it?), what, when, where, why and how of Grinchmas, all neatly packaged for you. 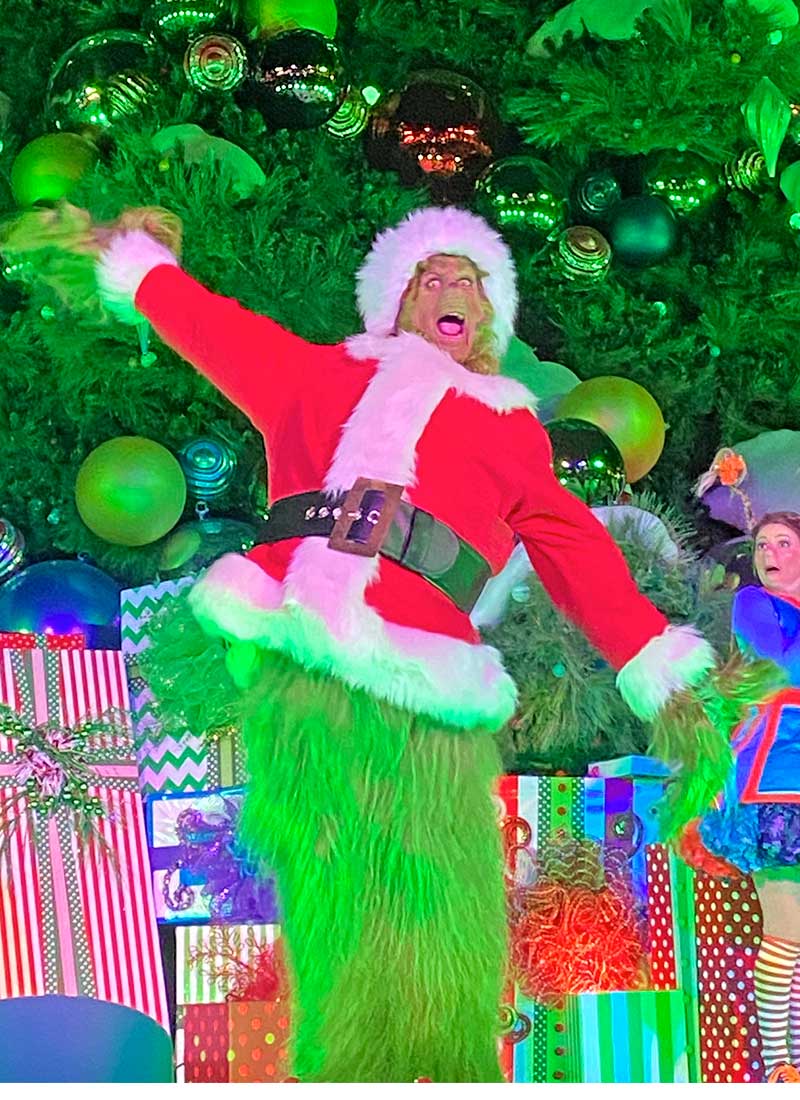 Many costumed Whos are just "who" you will find waiting to greet and entertain you during Christmas at Universal Studios Hollywood 2022. Not to mention, the Grinch himself and even his dog, Max, will be present. Meet Cindy Lou Who and her many Who friends, from the tall to the small, as they are walking around, posing for pictures and making guests laugh.

The Grinch has become quite popular and chatty since his heart grew three sizes, so visit and take a photo with him early — lines grow throughout the day. We brought hm a treat — on onion! It led to a toadally fun interaction with him. Max, being a real dog, does not have much to say, so his line is quite short, and he leaves earlier than the Grinch. We recommend visiting the Grinch in the morning shortly after he arrives for the shortest line. And if you send the Grinch a postcard listing some of your good deeds, donations will be made to help support tutoring for homeless youth! 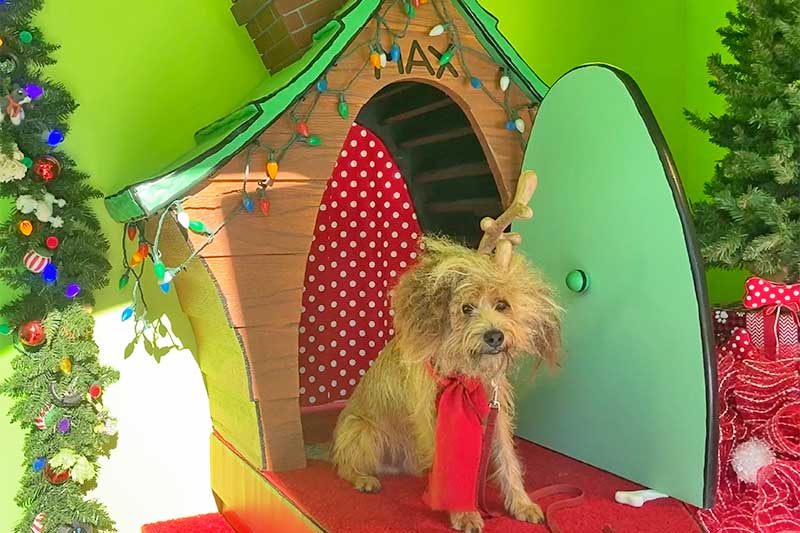 The Grinch steals the light from the tree — and the show — for the tree lighting. But his growing heart makes him put the light back, and you can enjoy the tree in all its wonder. Christmas at Universal Studios Hollywood 2022 is the most Grinchful time of the year at the park. You can’t miss him! 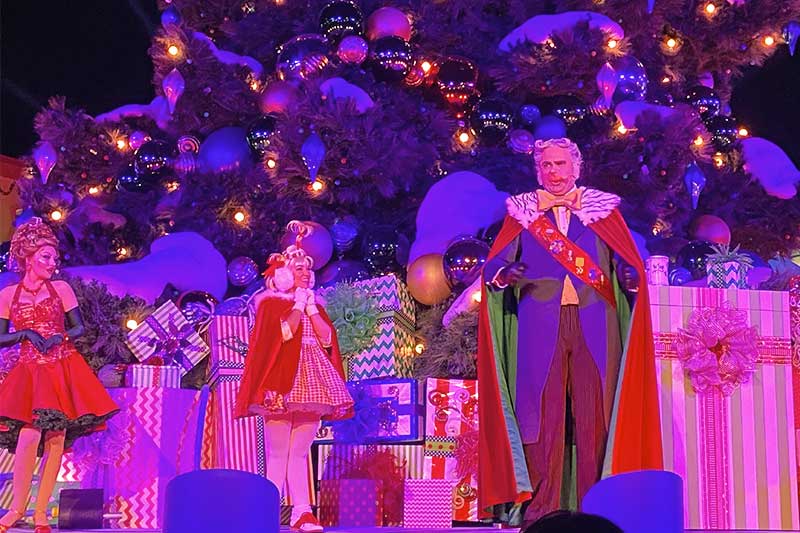 There is so much to celebrate during the Who-lidays. You can meet the Grinch, Max or other Who citizens. Holiday music sets the tone. During the day you can see the new Who-ville Welcome Committee show and once again catch Storytime with Cindy Lou.

Starting when it gets dark enough on select nights (5:30 p.m. on the night we visited but may be 6:00 during the week), the Whos (along with the Grinch) gather on stage for the Christmas tree lighting for the new Whoville Christmas tree. The lighting occurs about every 30 minutes. Each lighting is followed by a brief snowfall. The lighting has a new show and the tree has a new expanded backdrop. 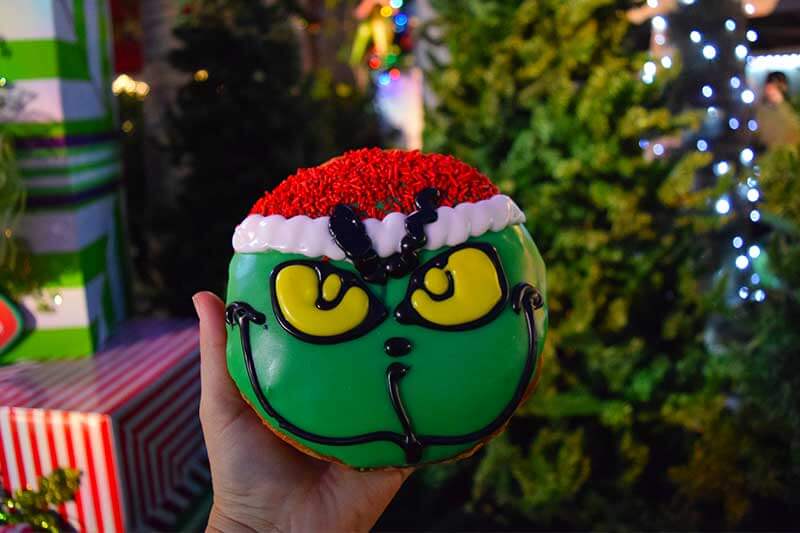 In terms of other treats, there are some Grinchy treats, such as green cotton candy, giant Grinch doughnuts and mini doughnuts to buy. Find other holiday favorites in the Grinchmas area. Bite into one of the yummy Who-liday cookies. You'll also find dessert jars, s'mores cupcakes and pumpkin spice churros. Sip flavored hot chocolate drinks (great for warming up when it gets dark). Adults can enjoy spiked hot cocoa and hot buttered rum. 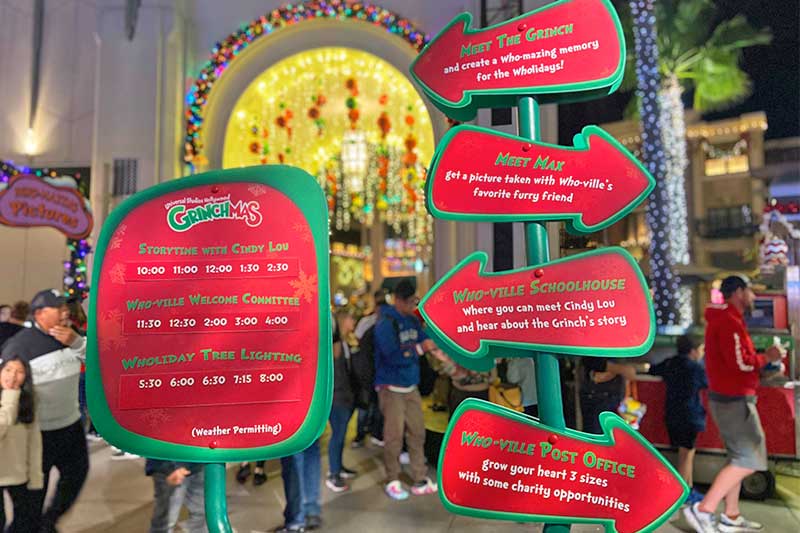 When can you experience Grinchmas at Universal Studios Hollywood 2022? In 2022, it will run from Nov. 25, 2022, to Jan. 1, 2023! Grinchmas used to fall only on select days in December. Now Grinchmas comes every day (but note that there are fewer showtimes for each show on weekdays in early December)!

While the tree lighting is now the main event at night, you and the tadpoles can enjoy the Who-ville Welcome Committee and Storytime with Cindy Lou during the day. Look for carpet circles on the ground for the tadpoles to sit and listen!.

The Frog Family likes to hop in and out of the Grinchmas Who-bilation in the Upper Lot throughout the day. We love meeting the various Who characters — they are so funny! Look for signs with all of the Who-liday event times posted at Grinchmas entrances so you can plan accordingly. There are lighter crowds during the day than at night. You'll also encounter lighter crowds during the week in early December than closer to the holidays. But you'll still want to visit Grinchmas at Universal Studios Hollywood during the night, starting at 5:30 p.m. The lights after dark make the whole scene even more festive and beautiful. Be sure to visit on a night with evening hours in the park after it gets dark. 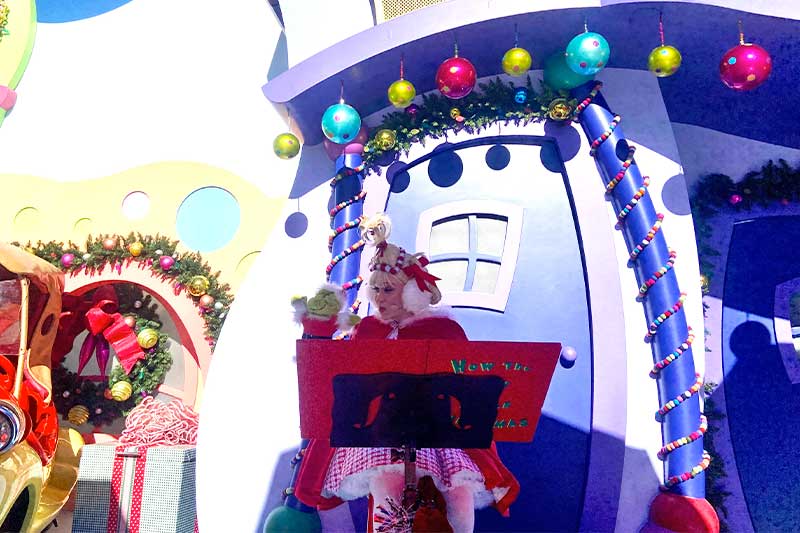 You’ll find Grinchmas in the Upper Lot in Universal Plaza. (When you enter the park, walk straight ahead and you’ll see it on your left – followed by Hogsmeade on the right). Grinchmas is just a hop, skip and a jump away from The Wizarding World, Despicable Me Minion Mayhem (where you can also meet Minions and other "Despicable Me" characters) and Super Silly Fun Land. This makes Grinchmas one of the most fun times of the year at Universal Studios for young tadpoles! 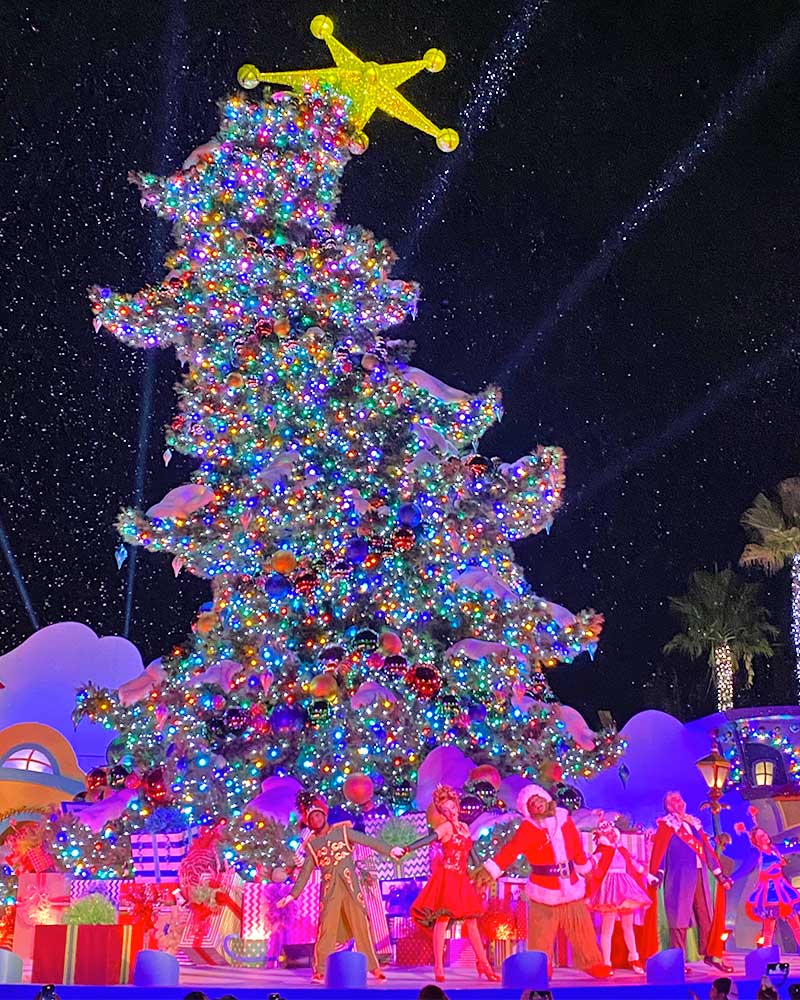 Why go to Universal Studios Hollywood at Christmas time? It’s toadally fun, of course. Where else will you see a Seuss-ian wonky Christmas tree and real-live Whos? The Grinch is hilarious now that he's not trying to ruin your holiday (and he’s green, right? Can I get a ribbit, ribbit for my favorite color?!). It's something new to try at Universal and provides holiday fun for the whole family. Snowfall in Southern California is already pretty magical, but snowfall in Whoville is even more amazing. After visiting Grinchmas, hop on over to The Wizarding World for a cup of hot Butterbeer or a holiday dinner. Yum! Check out more details about the best food and drinks in the Wizarding World.

How should you approach Grinchmas at Universal Studios Hollywood? Hit the Grinch line as early as you can, and then hit the Studio Tour and your must-see rides in the Lower Lot early in the day. Then, return to see the tree lighting and snowfall. Note that the Grinch leaves his post to do the tree lighting show every half an hour in the evening. 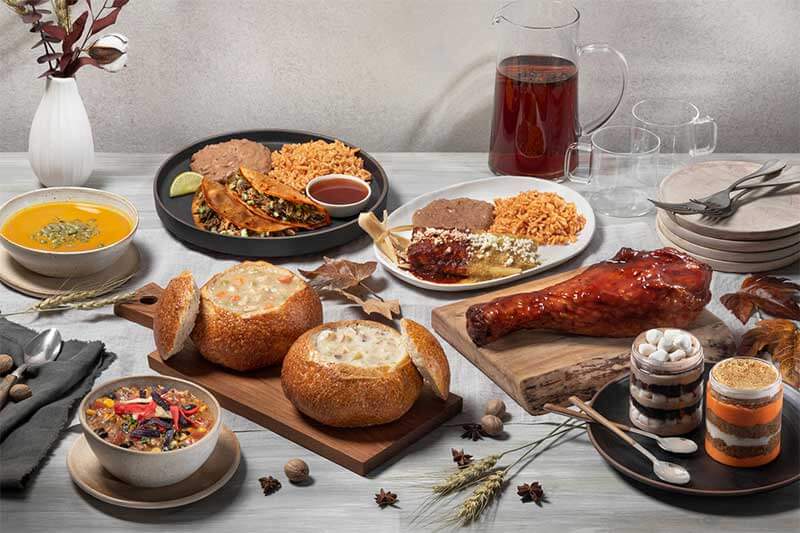 We love trying seasonal foods, treats and beverages during the holidays at Universal Studios Hollywood. 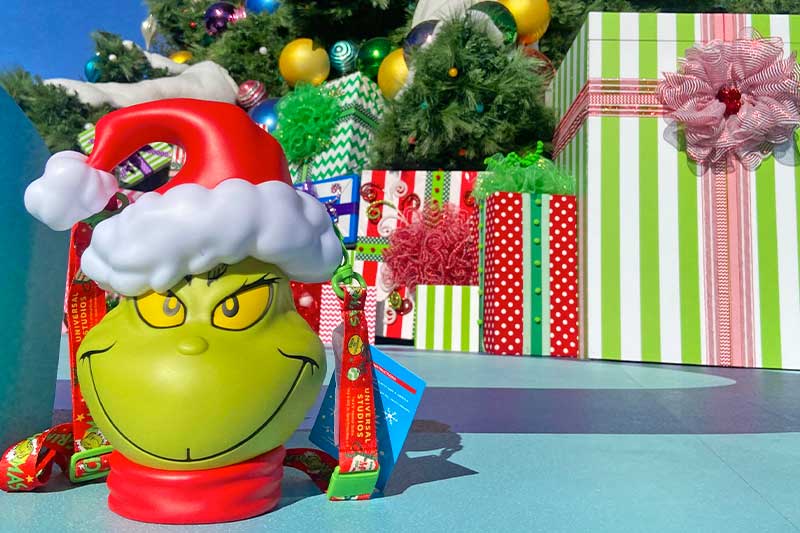 Besides the yummy themed holiday foods in The Wizarding World and Grinchmas, you can also enjoy other fall food items at Universal Studios such as these 2021 items: 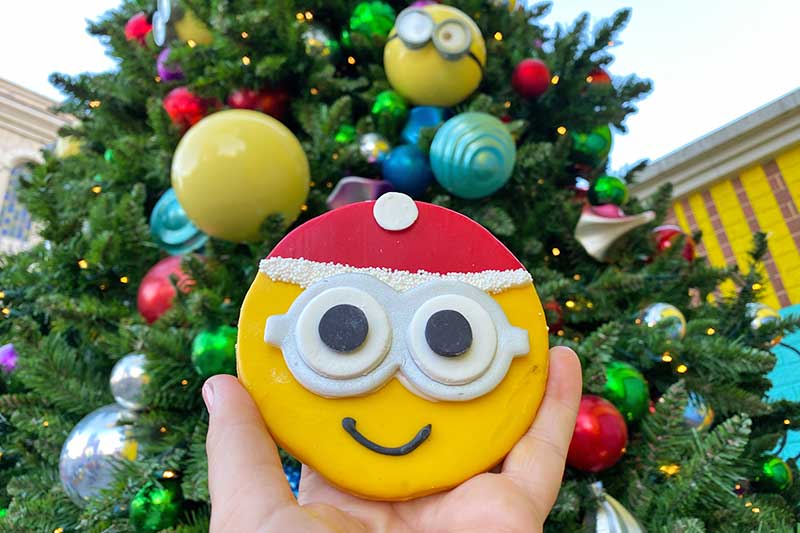 If you hoppen to be visiting on Dec. 31, 2022, you can ring in 2023 at EVE, the New Year's Eve party. Enjoy multiple party areas with music, dancing, drinks and souvenirs. The midnight countdown celebrates with fireworks. Winter snowfall and confetti bursts add excitement to designated areas. The festivities are included in your theme park ticket, and the park stays open until 2 a.m. The New Year's party festivities kick off at 9 p.m.

Tips for the Holidays at Universal Studios Hollywood

With so much hoppening during the Universal Studios Hollywood holiday events this season, you need to plan ahead to see it all. We've even created a checklist of our holiday must-dos! 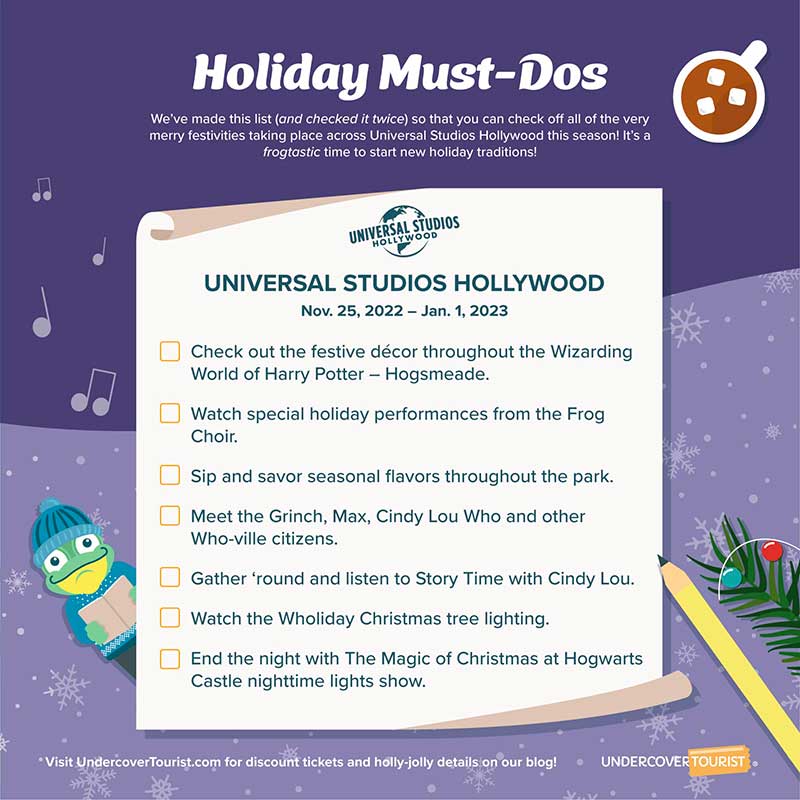 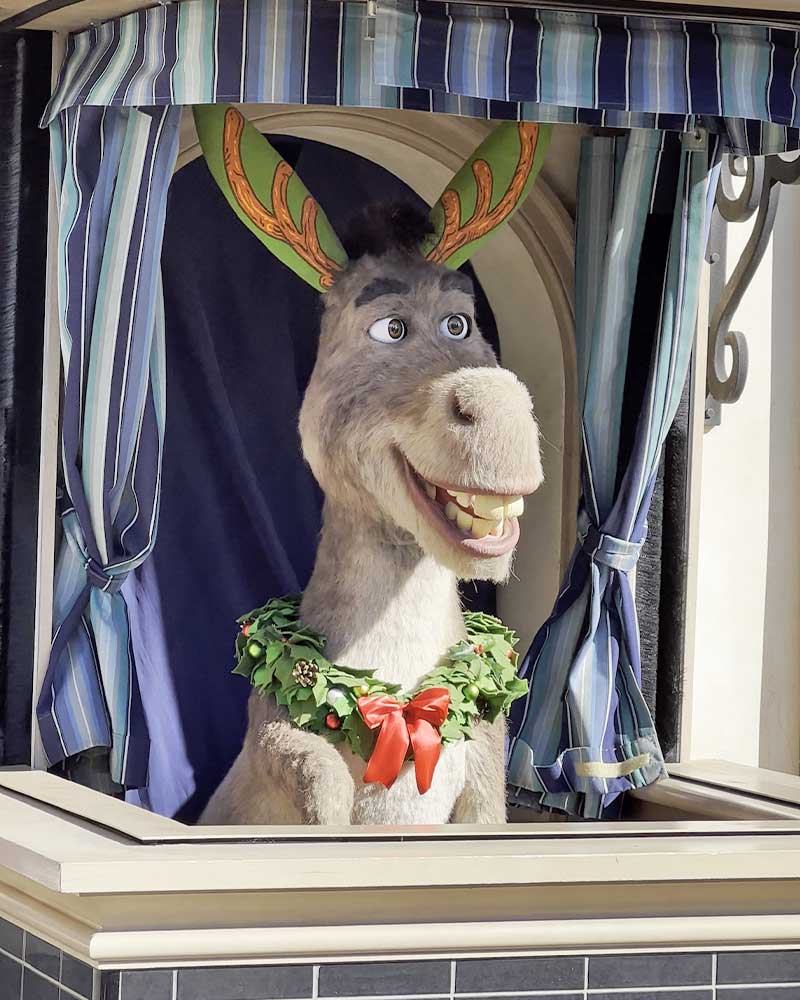 Here are our tips for maximizing your time during the Universal Studios Hollywood holiday events — consider them an early Christmas present from us: 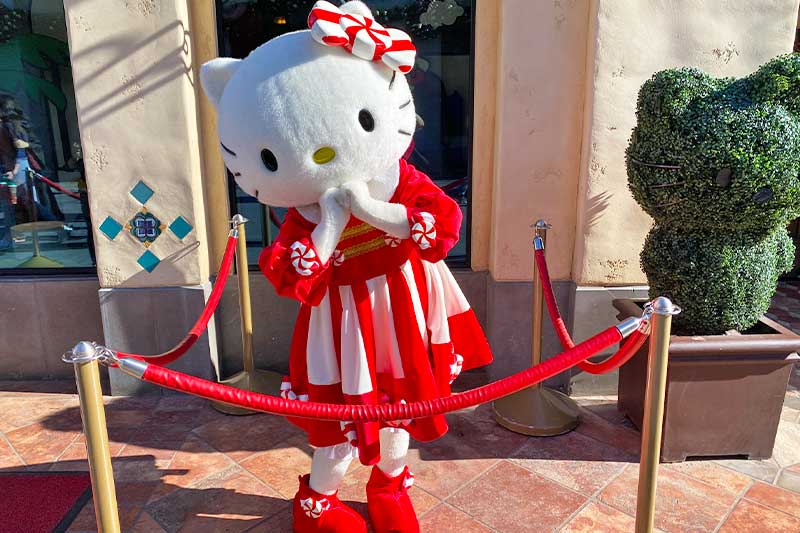 Even though the earlier and weekday dates of Grinchmas are not as crowded as peak times near holidays and weekends, the park hours are much shorter on weekdays in early December. The closing times vary from 6 p.m. to 10 p.m. throughout the season. A shorter night can definitely cut the fun off early. You'll want to plan to fit it all in. Having Express access on any of those days can help you experience more of the park. You want to hit all the seasonal entertainment, rides and shows no matter which day you visit.