Ever dreamed of exploring the stars and traversing vast planets and distant galaxies? Then plan a trip to the John F. Kennedy Space Center. So much more than just a theme park, this NASA field center is home to a range of exciting activities and attractions that offer a glimpse into the world of space, science, innovation and imagination. It's here that famous launch operations such as the ones for Apollo and Skylab were carried out and where robotic and commercial crew missions are managed to this day. Since the dawn of America's space program, Kennedy Space Center has been where advanced technology meets humanity's passion to travel far beyond our own planet. 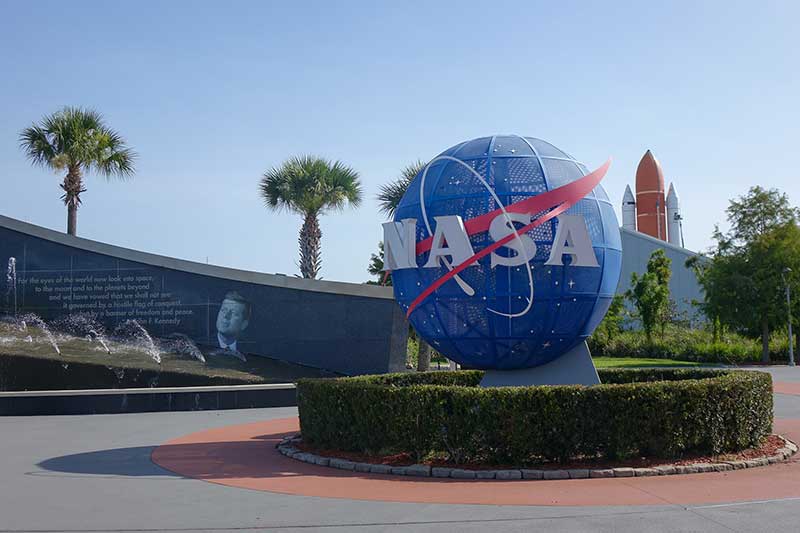 One of 10 NASA field centers across the United States, and the launch site for every U.S. human space flight since 1968, Kennedy Space Center is a premier working spaceport that researches and develops innovative solutions for government and commercial space ventures needed for working and living on the surfaces of the moon and other bodies in our solar system.

What started as a drive-through tour of the Cape Canaveral Air Force Station back in 1966 is now a 70-acre Visitor Complex where frogs can explore historical displays and exhibits that tell the rich history and awe-inspiring future of space travel. The Kennedy Space Center Visitor Complex claims the elite distinction of being one of the few places on earth where the public can view a live rocket launch, but it's also the only place in the world where you can touch a moon rock, tour a NASA spaceflight facility, see the space shuttle Atlantis, get an up-close view of a real Saturn V moon rocket and meet a veteran NASA astronaut all in the same day! 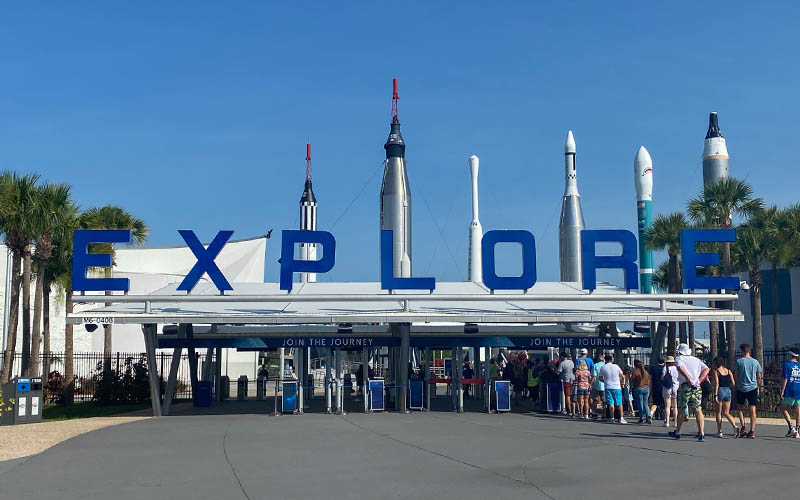 Kennedy Space Center is located on Merritt Island in Brevard County — about 60 miles east of Orlando. The easiest way to get there from Orlando is a car, which will end up being about an hour-long drive via Highway 528 or State Road 50. Highway 528 is a toll road, so be prepared to pay around $8 round trip. Parking at the Kennedy Space Center Visitor Complex is $10 for automobiles, and the parking lot is conveniently located right in front of the entrance — no tram required! Take advantage of best-in-class service and reliability, fast check-in and the ability to pay now or later and bundle for maximum savings when you book a rental car through Undercover Tourist!

If you want to explore everything the Visitor Complex has to offer, you won't be able to accomplish it all in one day. (Hitting the highlights in one day, though, is completely doable!) If you want to book a hotel room, there are tons of affordable options just minutes away — all close to beautiful Atlantic beaches and nearby Port Canaveral. 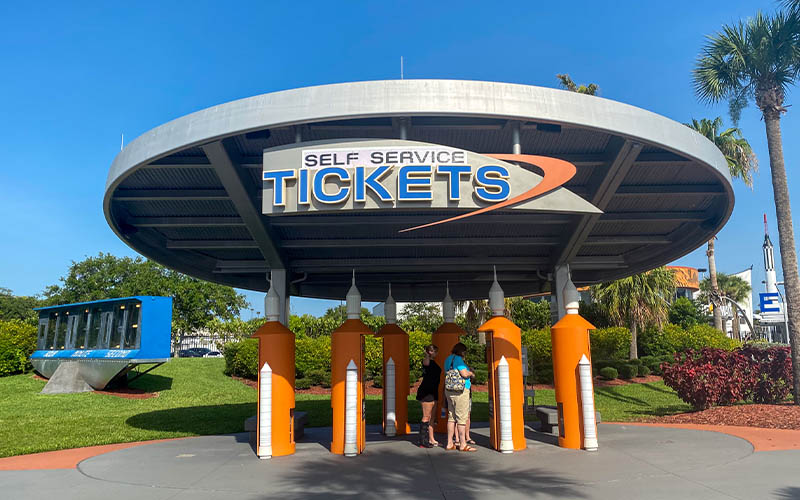 Kennedy Space Center Visitor Complex is open Monday through Sunday weekly from 9 a.m. to either 5 p.m. or 6 p.m. depending on the season. Be sure to check the Kennedy Space Center's website for the hours of operation on the day of your visit. Entry to the Visitor Complex, however, ends one hour prior to closing. Save some green on a 1-Day admission ticket by purchasing through Undercover Tourist. This ticket includes the following:

Kennedy Space Center Visitor Complex has also introduced a new, two-day ticket which makes it possible for guests to visit for less than $45 a day!

Kennedy Space Center Visitor Complex is organized into Mission Zones, where attractions and tours are grouped together by chronological era. These zones give frogs an up-close, hands-on feel for the long and exciting history of space exploration — from its Hubble beginnings to its cosmically cool future. 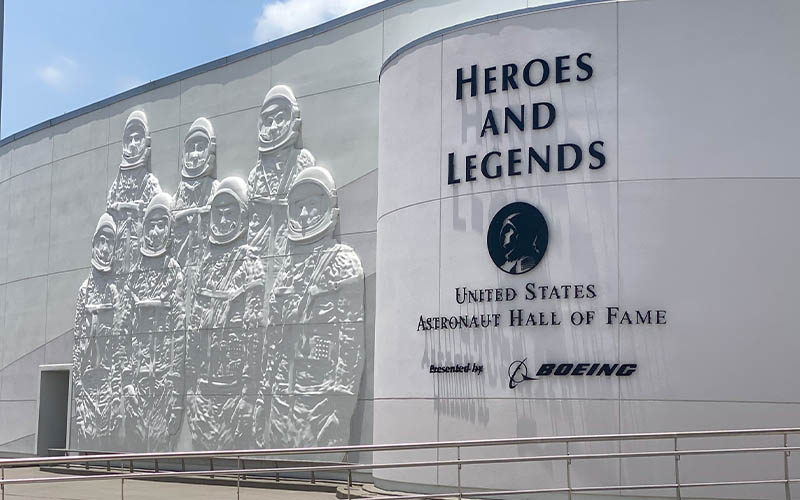 Explore NASA's early space programs and see what inspired a nation to reach for the stars. Heroes & Legends is where frogs of all ages can discover what it means to be a hero through the stories of NASA's space pioneers. 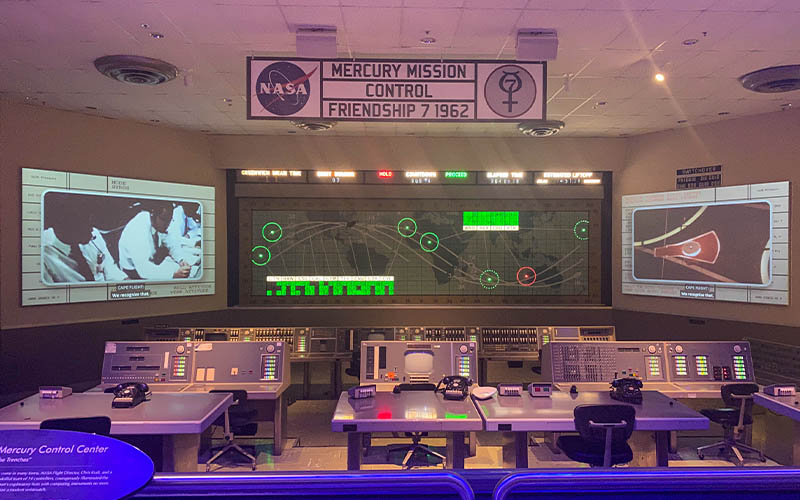 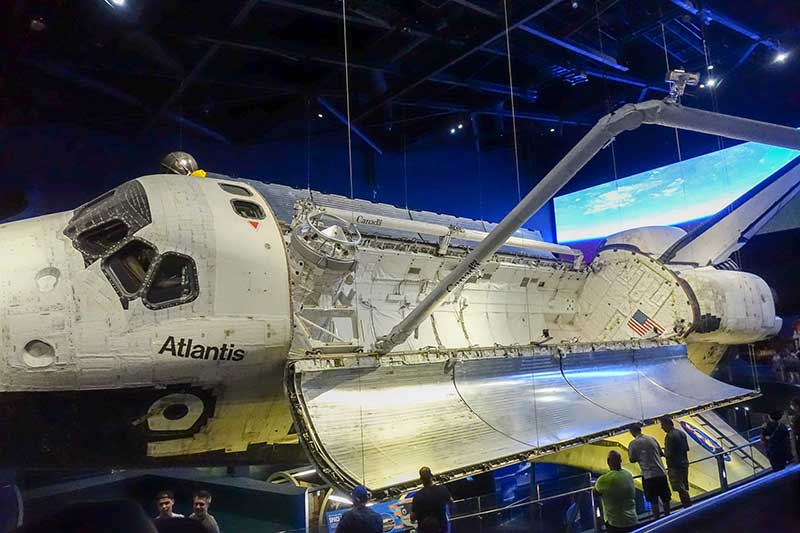 Enter the permanent home of Space Shuttle Atlantis, an American icon that launched like a rocket and landed like a glider while transporting astronauts to space and back for 30 years and discover the legacy of NASA's Space Shuttle Program. 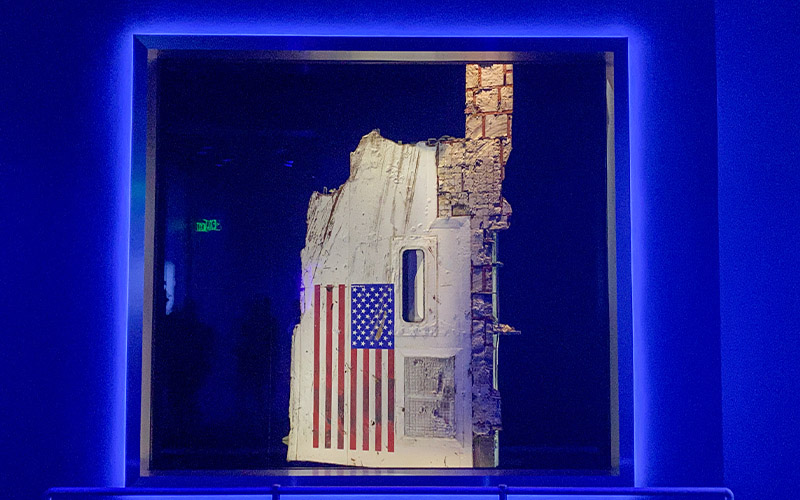 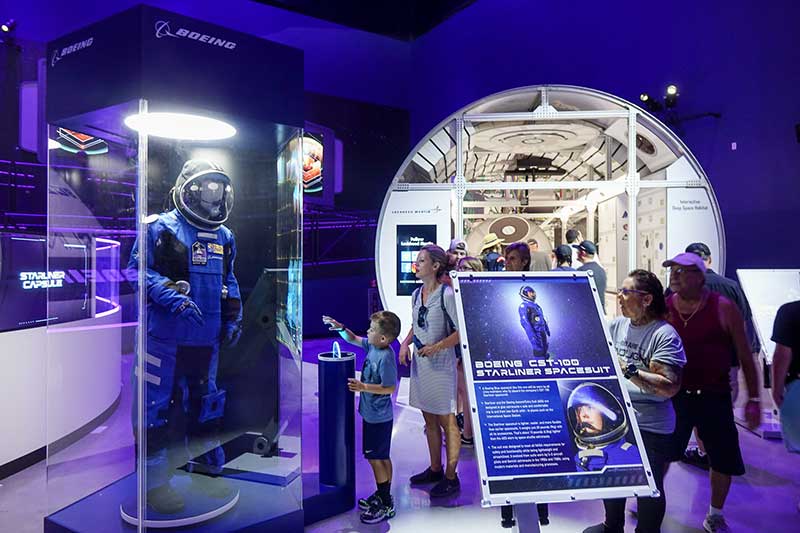 Immerse yourself in the science of current and future missions and find out how NASA is currently paving the way for the exciting future of space exploration. 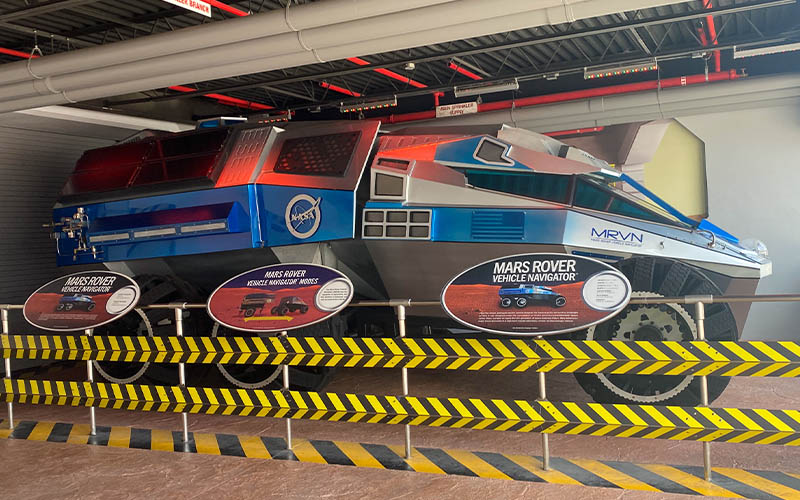 Race to the Moon 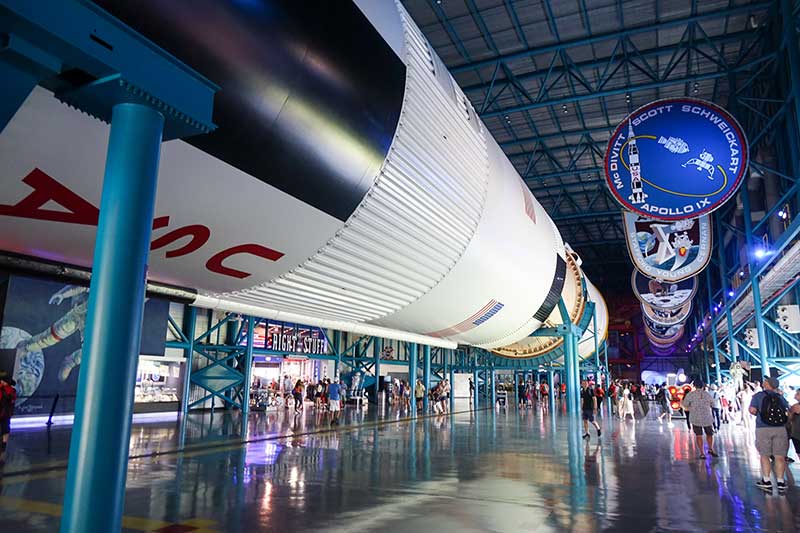 Relive the wonder and excitement of the Apollo moon landings through interactive and engaging exhibits at this one-of-a-kind attraction and celebrate the unprecedented achievement of putting humans on the moon. The Apollo/Saturn V Center pays homage to the people and machines that made lunar dreams a reality and the future seem ripe with endless possibilities. 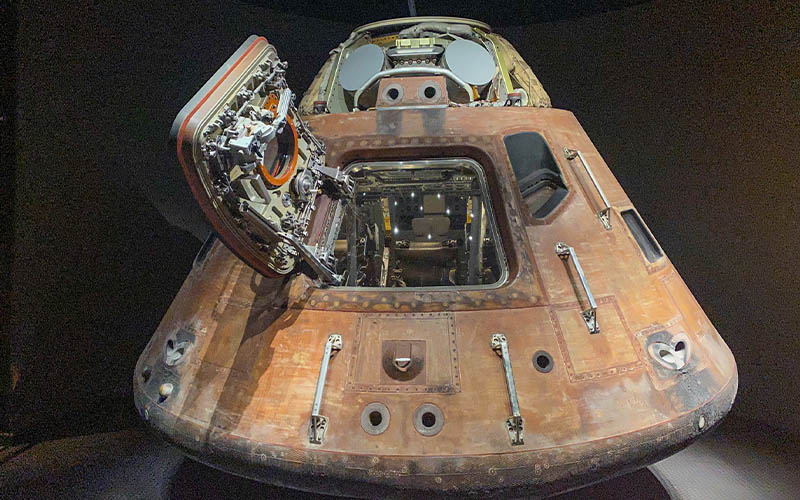 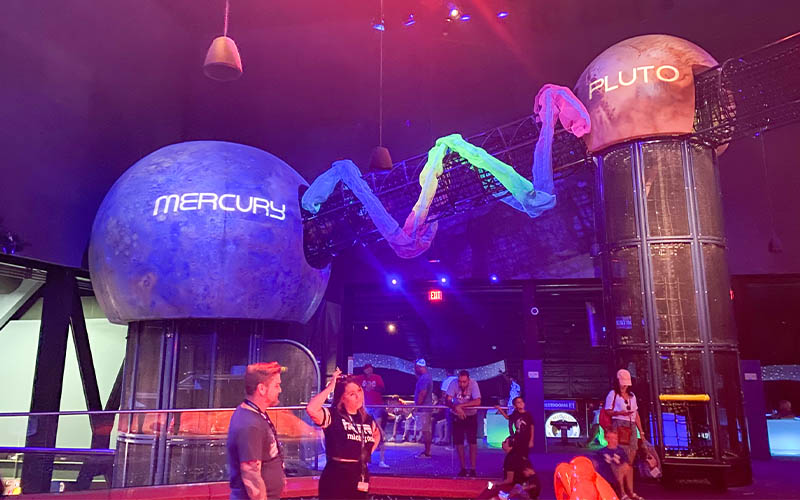 Designed for space explorers ages 2-12, Planet Play is a fully-immersive multiple-story play experience where the younger generation can map a constellation, climb a wormhole, walk on Saturn's rings and slide through an asteroid field via numerous interactive gaming and artistic elements. 30 minutes to one hour.

The only way to reach the Apollo/Saturn V Center, the Kennedy Space Center Bus Tour offers one-of-a-kind access to restricted areas of Kennedy Space Center. Hear from local space experts in their fields and learn how NASA has joined commercial partners to prepare for the future of space exploration. This air-conditioned motor coach will take you closer to exclusive areas like the Vehicle Assembly Building and other operational facilities.

Tour availability and routes may be altered at any time with or without notice due to operational requirements. For example, during days leading up to a launch from Launch Complex 39A, the tour will be rerouted. The tour is 15 minutes long and concludes at the Apollo/Saturn V Center. It's also a 15-minute ride back to the Visitor Complex. Buses leave every 15 minutes and the last Bus Tour runs two and a half hours prior to park closure. Both the Apollo/Saturn V Center and Bus Tour are included in admission. 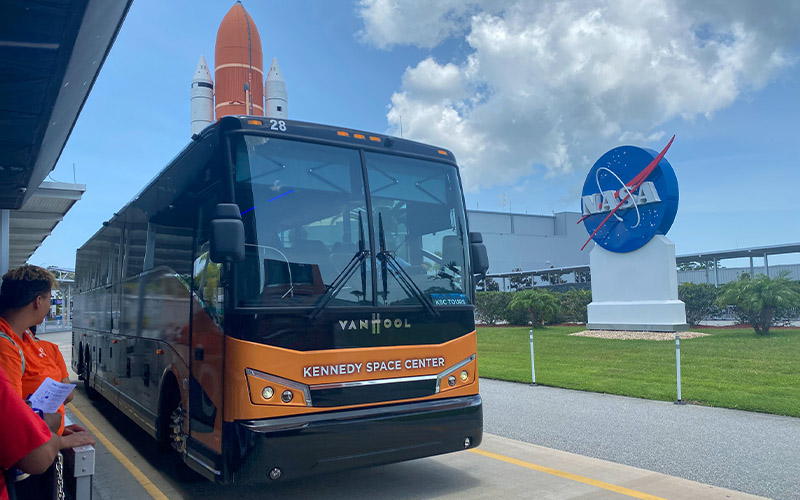 Make your day even more memorable with these additional experiences, not included in the price of admission. 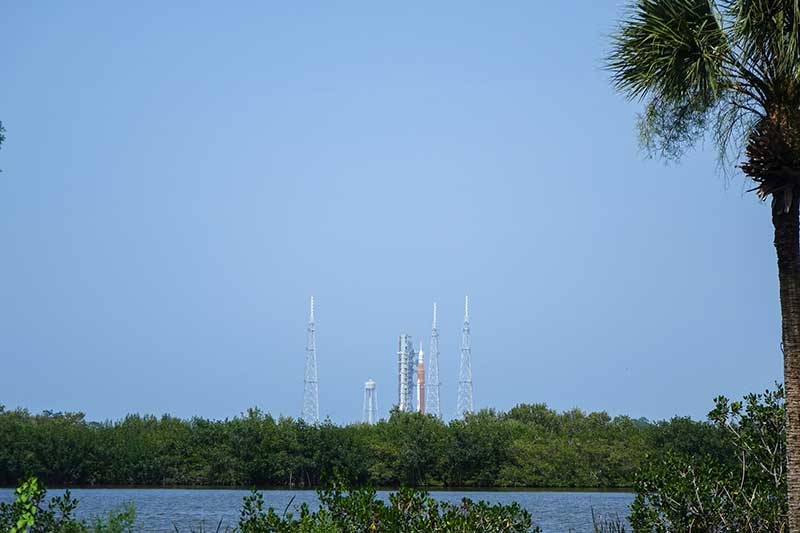 Kennedy Space Center hosts a number of eye-opening events each year — including the ever-impressive rocket launches. Check out the Events Calendar to find out when the next launch is and what other events are coming up. If offered, launch viewing opportunities are sold as soon as possible after the launch's confirmed date and time are publicized. See a rocket blast off into space from the Main Visitor Complex, the Banana Creek Launch Viewing Area at the Apollo/Saturn V Center or the LC-39 Observation Gantry. 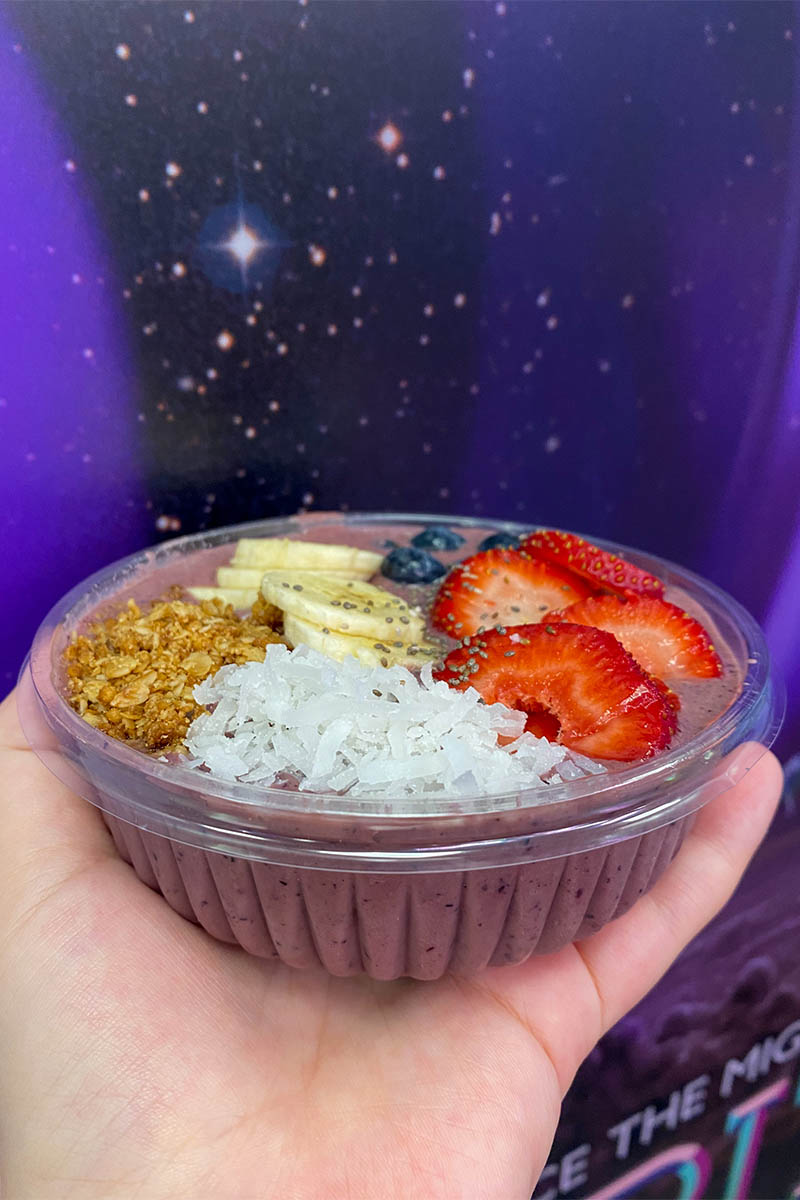 Kennedy Space Center Visitor Complex is a fascinating place to learn all about humanity's efforts to explore the vast universe we reside in. Because you can spend hours getting lost in all the exhibits, they provide several accommodations to make your visit as stress-free as possible.

And with that, we are officially go for launch! Have you been to the Kennedy Space Center before? What tips do you have? What's your favorite mission zone? Let us know in the comments below!

SAVE $12 vs Adult gate price