Leap's Note: Today's post comes from Undercover Tourist customer and super Disney World fan Vern Woodruff. Vern has written about the Bibbidi Bobbidi Boutique, princess dressing in the parks and the Jedi Training Academy. Today he offers his review of the Harmony Barbershop.

When entering Magic Kingdom at Disney World, the first “land” you encounter is Main Street U.S.A.  It depicts an idealized representation of an early 1900’s town, with the building facades designed to replicate businesses and stores of the era. The interiors of many of these buildings contain gift shops and various snack options. However, there is one store front that not only looks like an old-fashioned barbershop, it actually is a functioning barbershop with state-licensed cosmetologists. If you find yourself or a child needing a haircut while at the Magic Kingdom, then the Harmony Barbershop is for you. 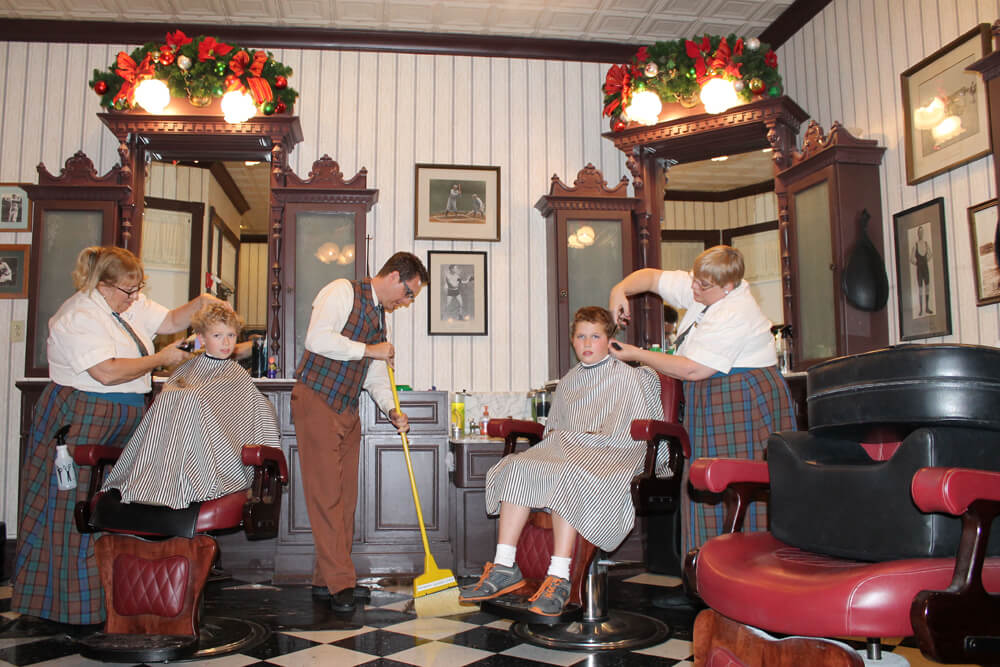 The Harmony Barbershop provides haircuts for any age, but specializes in first haircuts. The cost for a standard haircut is $15 (child 12 and under) or $19 (adult), while the first haircut package is $19. Its hours are typically 9 a.m.to 5 p.m., and advance reservations are encouraged. You may be able to stop in and make an appointment the day of your visit because walk-ins are welcomed, but there is no guarantee that you will be able to obtain a time. 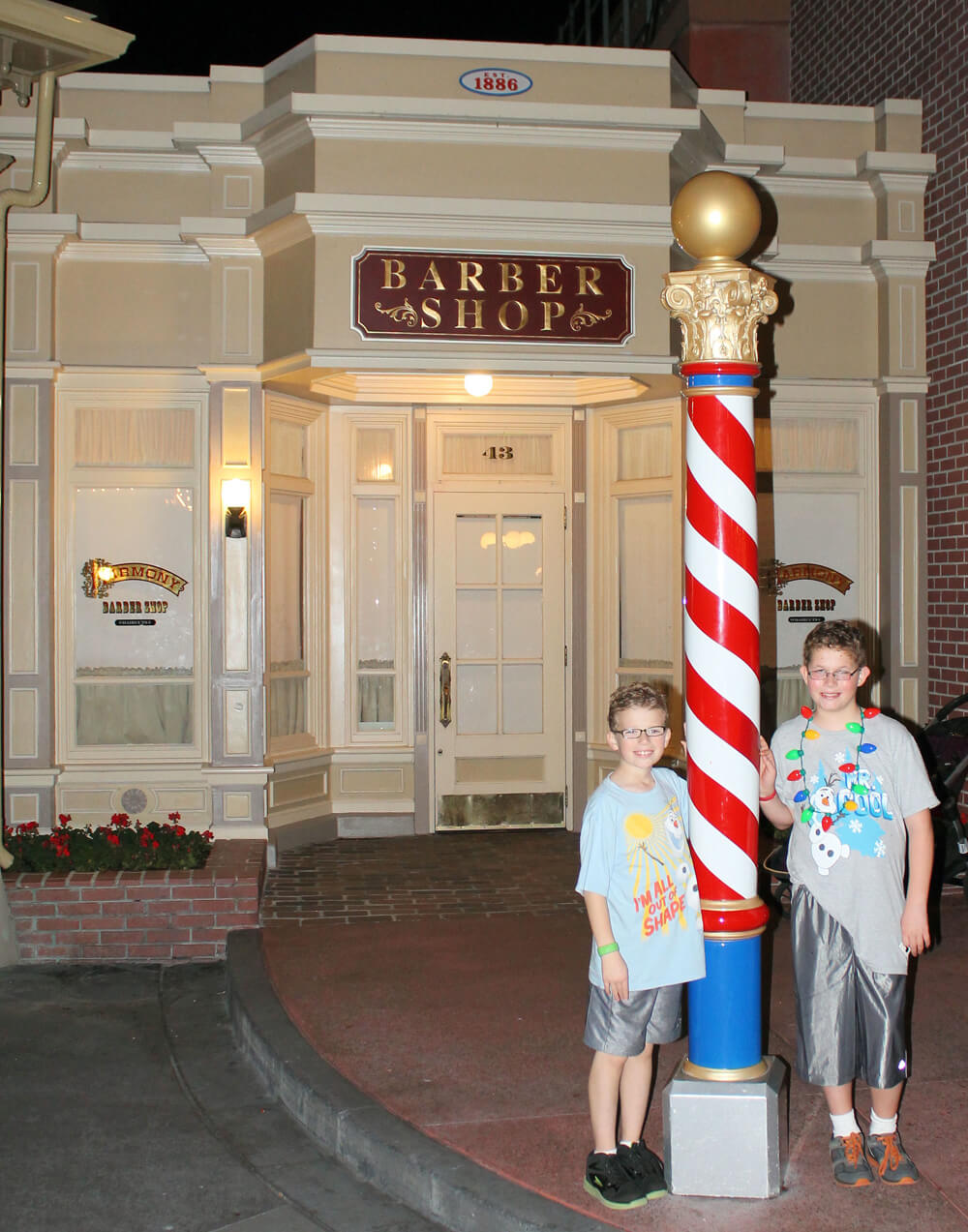 Several weeks prior to our last visit to Magic Kingdom, I discovered information on the Harmony Barbershop. My two boys, ages 9 and 10, just happened to be at a point where they were due for a haircut. My wife and I thought a visit would make a nice addition during one of our days in Magic Kingdom. Since this was not a “must-do” item for us, we did not make an advance reservation and instead stopped by early in the afternoon during our visit and inquired about making an appointment. My wife secured one about an hour later for the boys. We wanted a mid-afternoon time for the haircuts when the lines and waits for the park’s attractions would typically be at their longest. We had not told our boys about this, so they were quite surprised when we went inside and they found out that they were both getting haircuts. My 10-year old went first because his brother was a little apprehensive about having his hair cut (my wife had always cut their hair). Both boys enjoyed being in the old-style barber chairs and the two ladies that cut their hair were quite friendly and engaged the boys in various conversations. They had a basket with a selection of toys in it, one of which they gave to my 9-year-old. Once he had that, he was more comfortable having his hair cut. I think my wife most enjoyed the visit because she was able to sit back and watch the boys having their hair cut instead of having to do it herself.

The haircuts were done quickly and once they were completed, the boys had the option of having pixie-dust (glitter) added to their hair. The 10-year-old wanted the glitter, while the 9-year old did not. Their little sister did not have her hair cut, but the barber did glitter her hair when she asked. One note about the glitter is that while it may seem like a neat idea at the time, the glitter pieces are fairly large, so we ended up dealing with glitter in the kids’ beds and in the showers. Our visit to the Harmony Barbershop was a neat addition to our visit and was a unique place for the boys to have a haircut. 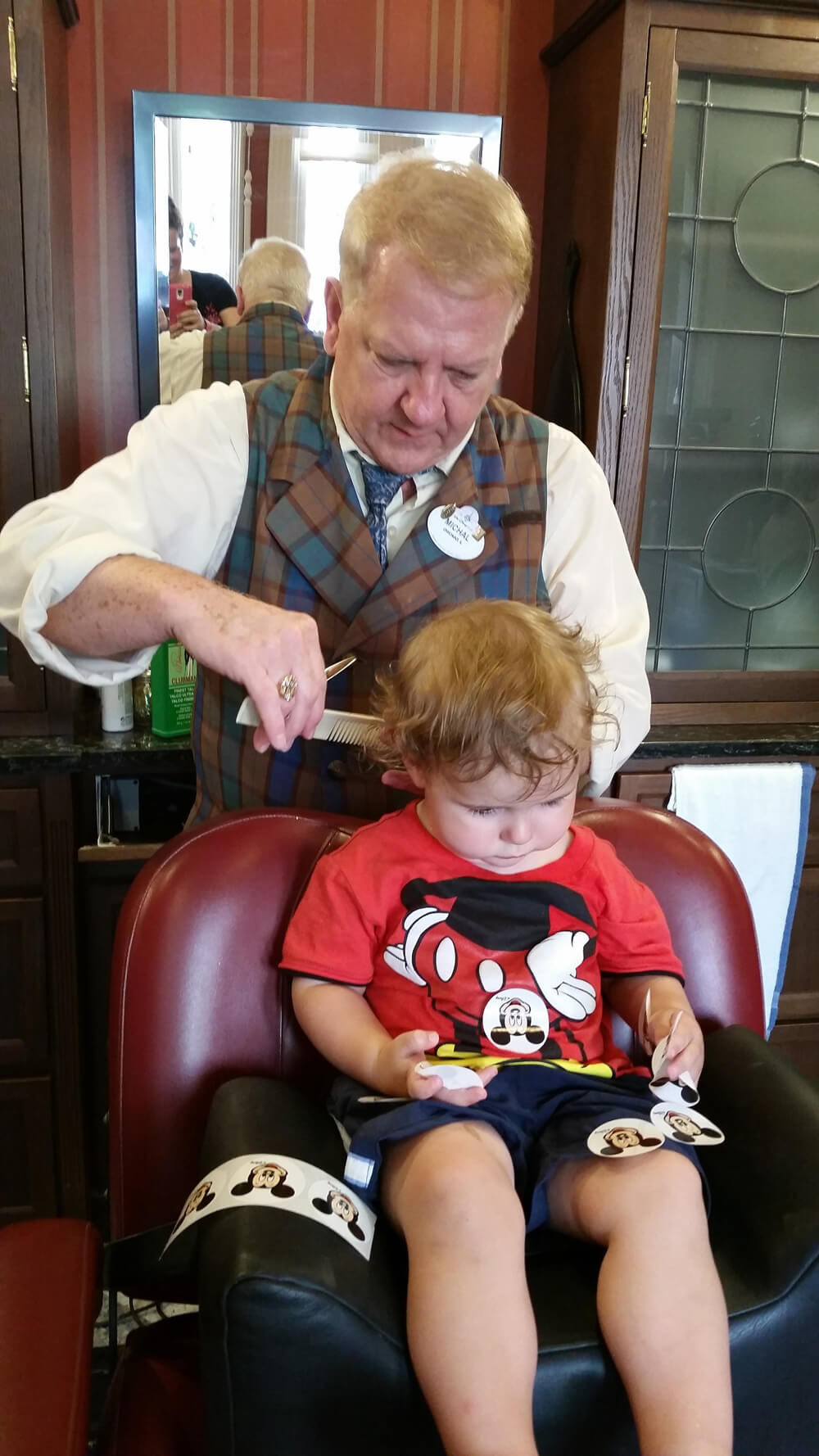 While people of any age can have their hair cut at the Harmony Barbershop, their specialty is first haircuts. They have a first haircut package, which includes a certificate and a special Mickey Mouse hat commemorating the occasion for only $19. After telling my sister about the Harmony Barbershop and the first haircut package, she decided to take her 22-month-old son for a first haircut during their visit.  Since this was something she wanted to make certain to include during her family’s visit, she called eight weeks in advance to make a reservation. When she called, there were only two appointment times available, so she was happy that she was able to obtain a reservation.

She was not sure how her son would react to sitting and having his hair cut because he is shy around strangers, but the barber worked very well with her son and gave him a strip of Mickey Mouse stickers to play with. Her son was soon deeply involved with the stickers, covering his legs and shirt with them. Then he kept busy picking the stickers off his clothes and moving them from hand to hand. He did not really even seem to notice that his hair was being cut. When the barber was finished, she received a certificate and a sachet with his hair, while he had a child-size Mickey Mouse ear hat embroidered on the back with “My 1st Haircut” put on his head.  A kids Mickey Mouse ear hat costs around $14, so receiving one as part of the $19 first haircut package makes the package a great deal. She was quite happy with her son’s haircut, and it made the occasion of his first haircut that much more memorable and special. 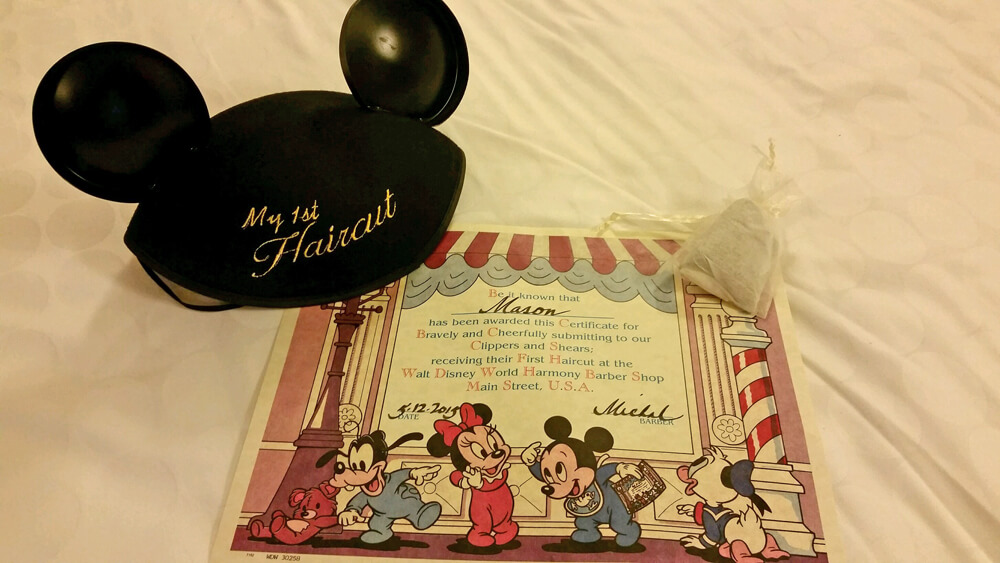 Things of Note About Harmony Barber Shop at Magic Kingdom

Have you visited the Harmony Barbershop or have a question about it? Let us know in comments below!