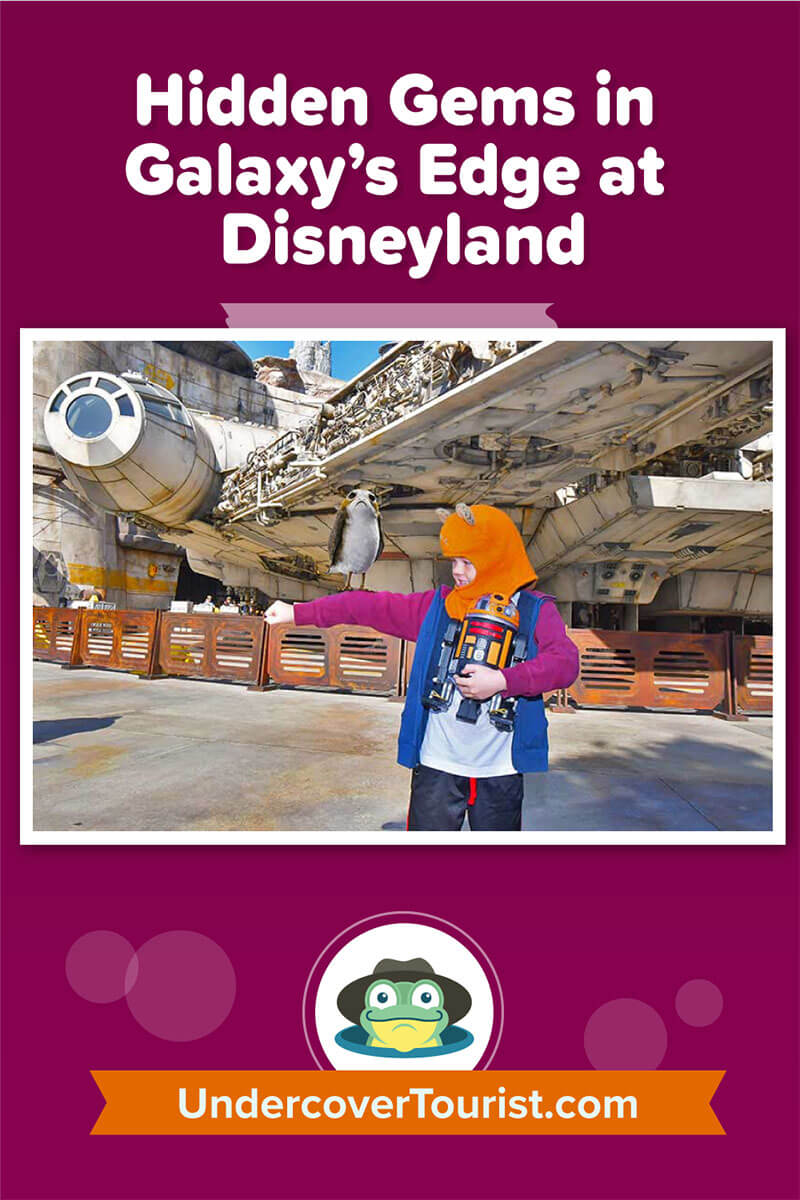 When you visit the village of Black Spire Outpost on the planet Batuu, you are a traveler to another planet and enter right into the Star Wars story. On our first visit to "Batuu West" (aka Star Wars: Galaxy's Edge at Disneyland; you'll find "Batuu East" at Disney World), we found the the size of the buildings, spires, ships and details throughout the land almost overwhelming. The language of the land is Aurebesh. The spires of Black Spire Outpost are not stone, but the petrified remains of giant trees. You’ll see moss and lichens and even a few twigs at the bases. The buildings have damage from past battles, exposed wires, pipes and worn fabrics to show the age of the place. It’s brand-new, and yet you really feel like it’s crumbling down and perhaps a little sketchy.

There are so many hidden gems in Galaxy’s Edge that keep you engaged and feeling like you are in a real village. The backstory of this village is that this is a trading post and one of the last stops on the edges of wild space ... but Black Spire Outpost is far from long forgotten.

The Resistance Mobile Command Post is building strength here, hidden in the hills and forests of this land. The First Order must have some inkling of this movement, because stormtroopers, Kylo Ren and First Order officers patrol the land, questioning citizens and visitors, checking credentials, stopping hackers and questioning the allegiance of people and droids. They make arrests and are always on the lookout for spies. There’s a real live spy traveling about the land. There are probably many, but the one you might see stands out because of her orange jacket and blue hair. If you see her — her name is Vi Moradi — do not give away her location (unless you are loyal to the First Order, of course). 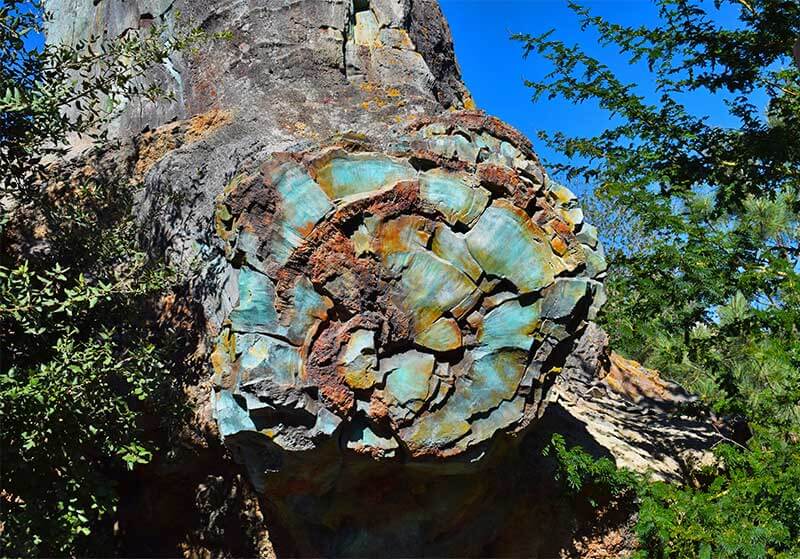 Star Wars: Galaxy’s Edge is the most immersive land Disneyland has ever built. There are many obvious sights, such as characters and ships. But the hidden gems of Galaxy’s Edge are the little details that add to the backstory and make it all just so much more real. These hidden gems put that extra bounce in our jump when we notice them because they are so much fun. The more times we visit, the more we learn and discover. Let’s hop to it and uncover a few of our favorite hidden gems in Galaxy’s Edge at Disneyland. When you visit with family and friends, you can toadally point them out to hop up your cool factor. 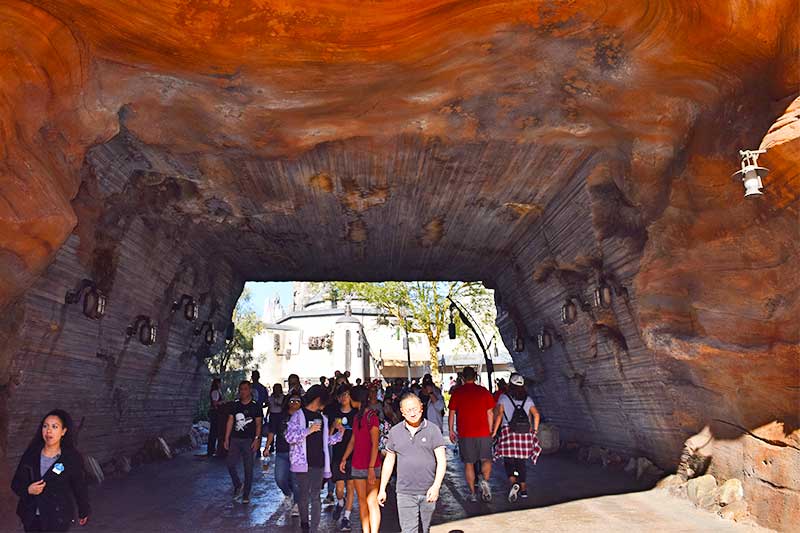 First of all, the land itself is like a hidden gem of its own. All of the other lands of Disneyland connect to others. You easily pass through one land to get to another and they flow, sometimes seamlessly, into one another, or at least take you to the hub where you can jump right into another land.

But Star Wars: Galaxy’s Edge is not connected to other lands. It's hidden away, too! There are no signs leading to this land, and you must consciously choose to go there. You’ll travel along one of three passageways, two of which take you through big tunnels, to enter. This gives the illusion that you are crossing over into a different place. As you walk through the tunnels, you leave Disneyland behind and the red rock of Frontierland transitions into the colors of Batuu as the music changes and puts you into a toadally different place and time. (It’s a long time ago in a galaxy far, far away, if you will.)

If you hop in from Critter Country, you’ll pass under the train tracks and take a long walk through tall foliage that transition from Critter Country to the trees and hills that hide the Resistance base. You’ll hear strange insect, droid and animal sounds, as well as ships flying and landing nearby. It definitely alights the imagination! What is in those bushes? 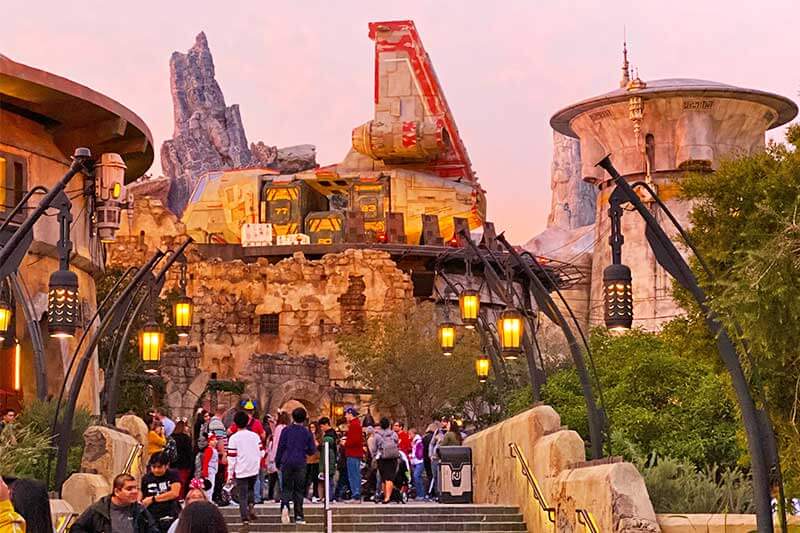 If you are standing near the landspeeders across from Droid Depot, look towards Docking Bay 7 (just before the Millennium Falcon). You’ll see a ship on the roof that has cargo with three numbers painted in yellow on the containers: 77, 80 and 83. Any guesses to what those numbers mean? They are the years original Star Wars trilogy movies were released (Episodes 4, 5 and 6). Toadally cool, right? Do you see how number 80 is being lowered? What's even cooler is when you walk into the restaurant and see container 80 suspended from the ceiling. The seating for the restaurant is in various cargo containers. You should definitely check it out!

Speaking of numbers, all of the trash cans in Batuu have the same number, 3263827, on them. It's the hatch number of the trash compactor on the first Death Star in Episode 4. 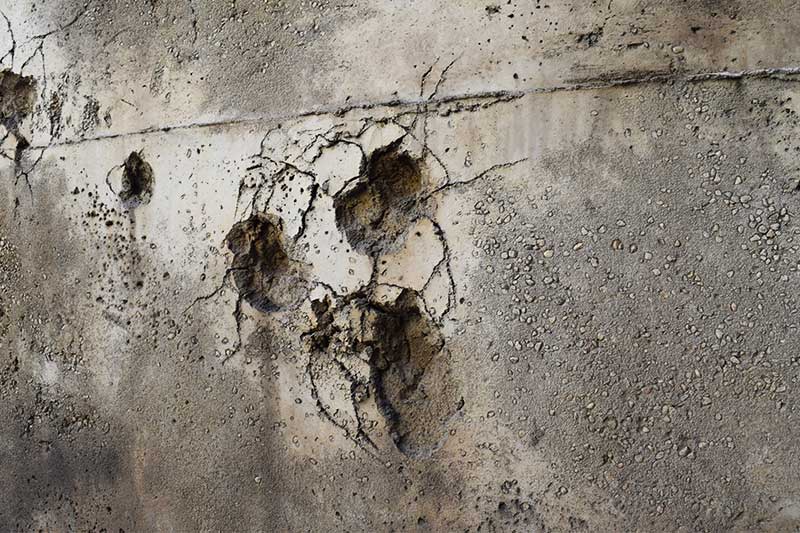 If the exterior walls of buildings and walls inside the Cantina could talk, they’d have amazing tales to tell. They’ve clearly gotten in the way of many conflicts and small battles. You can see the mark history has left with blaster holes and crumbling buildings throughout the land. But the one that stopped us in our tracks was the hidden Mickey three blaster holes. It took us many visits to find it. We’ll give you some hints so you can find it on your own. If you were a wheeled droid at the Millennium Falcon and you wanted to get up to Docking Bay 7, you could not take the stairs. There’s another route up there. It’s along that route. 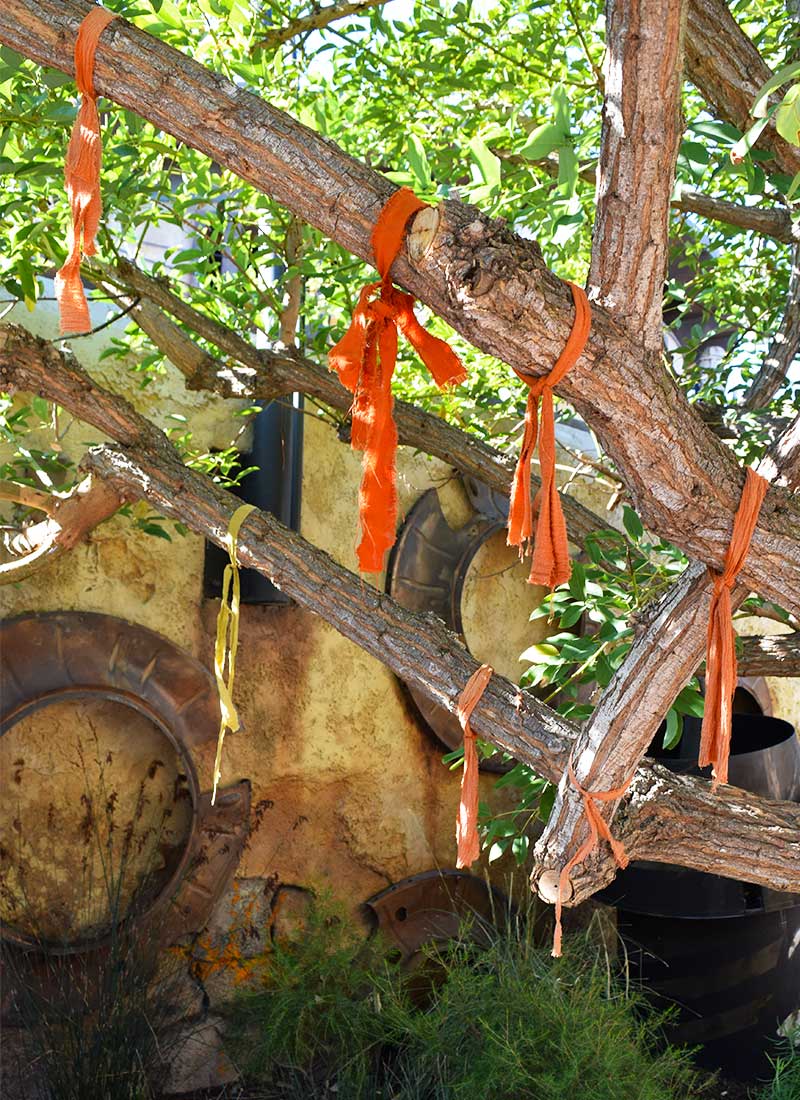 Make a Wish on the Wishing Tree

When you enter the courtyard where the gatherers await to help you build your own custom lightsaber from scrap metal at Savi's Workshop, you’ll see a tree with orange scraps of fabric tied to it. That’s the Trilon Wishing Tree. The citizens of Batuu have a tradition of sending their hopes into the universe. When they really want something, they tie the fabric to the branches of the tree. It is said that when the fabric disintegrates and falls off the tree, the universe grants the wish. Go ahead and ask a citizen of Batuu about it.

Keep Your Eyes on the Ground

Look down at the ground under your feet. Much of the ground is meant to look like a hard-packed soil. You’ll see footprints for strange creatures and wheel marks and tracks left by droids. How are your tracking skills? Can you identify them? 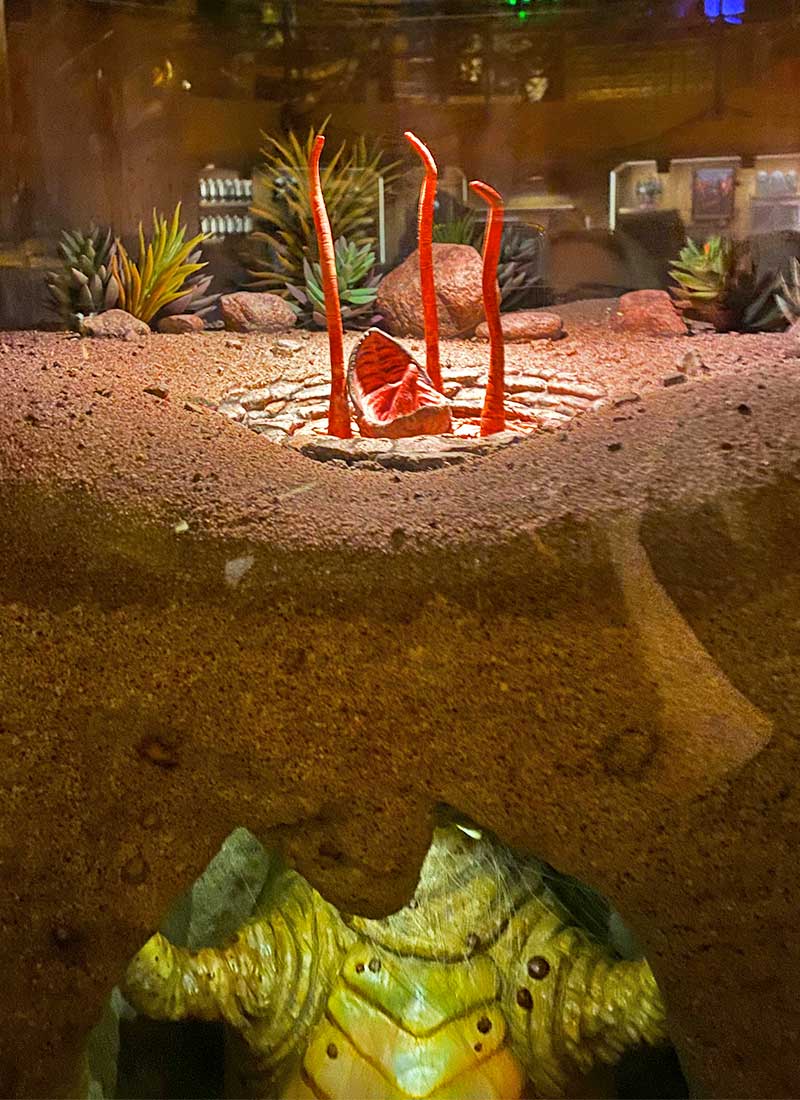 There are a few creatures to find if you go looking for them. We have happened upon these by accident, but they are fun to seek out. In the marketplace, locate the drinking fountain, or “hydrator” in Aurebesh. When you stop to get a drink or fill up your reusable bottle, linger a bit. There’s a dark tank of water above the drinking fountain. I think it implies that that is what you are drinking. Cool!? Gross? You decide. Anyway, once you start to hear a lot of bubbles, keep your eye on the window of the tank. You’ll get a fun surprise. While you are the marketplace, visit some of the "living" creatures in the Creature Stall.

Hop into Dok-Ondar’s Den of Antiquities to take in the many hidden gems and details. You’ll find cool creatures such as a baby sarlaac and other creatures or specimens in tanks around the store. If you are a huge Star Wars fan, you can spend a long time in this store with all of the relics. The hidden gems from the movies will have you geeking out big time. There were even a couple of Easter eggs from outside the Star Wars galaxy, but it seems that they have been traded away. The ark of the covenant is no longer there (in case you've heard rumors). According to the cast member, Dok traded it to a traveler in a brown hat and a brown satchel who said not to ask any questions. Hmm ... who could that be? Perhaps it's a look-alike, long lost relative of Han Solo? Fun stuff!

There are iconic sights in Star Wars: Galaxy’s Edge. The Millennium Falcon, the First Order Tie echelon shuttle, and the X-wing Starfighter and A-wing Starfighter across from Star Wars: Rise of the Resistance (opening Jan. 17, 2020). But you would never know that there are invisible beings and ships nearby unless you get a hologram. The PhotoPass photographers, called imagers in the land, BTW, can add a hologram to your photos in front of these iconic ships. That means you’ll get a cool hidden gem in your pic that you’ll get to see once your PhotoPass pictures come in. They are definitely fun surprises, so be sure to ask for a hologram.

Locating these Star Wars: Galaxy’s Edge Hidden Gems are just one way to deepen your experience when visiting Batuu. Have you uncovered any hidden gems in Galaxy's Edge that had you hopping with excitement? Please share them in the comments below. You'll need a few days at Disneyland to take in all the hidden gems throughout both parks. Your favorite froggy friends can help you save money with discount Disneyland Resort tickets and discount hotel stays nearby and now at the Disneyland Resort! Ribbit, ribbit!