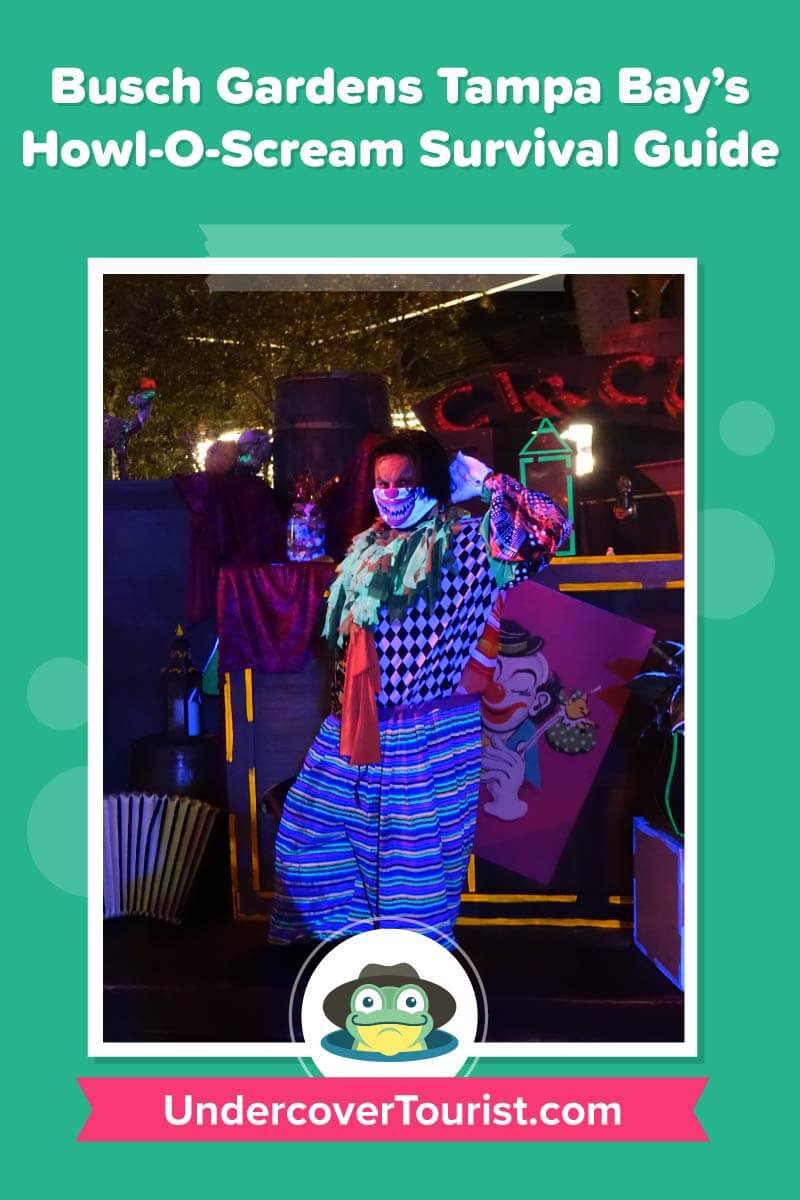 Haunted houses are back with a vengeance for Howl-O-Scream in 2021! For 28 killer nights, this haunting Halloween event takes over Busch Gardens Tampa, promising its usual screams and shrieks all night long. Last year, due to COVID-19, the event only featured outdoor scare zones and its signature show, "Fiends." This fall, Howl-O-Scream will introduce two new fear-filled haunted houses, along with three returning houses with fresh scares. Eight scare zones, three unpredictable hordes, "Fiends" and a skeleton band called "The Rolling Bones" are set to provide screams, laughs and everything in between. If you're up for the frights, keep reading to learn all about Howl-O-Scream!

Busch Gardens' Howl-O-Scream is a separately ticketed event that runs on select nights from Sept. 10 to Oct. 31, 2021. The park typically closes to daytime guests at 6 p.m. before it turns into a place of terror from 7 p.m. to 1 a.m. on Fridays and Saturdays, and 7 p.m. to midnight on Thursdays and Sundays. However, you may enter the park as early as 5 p.m. You'll receive a wristband to put on yourself, so team members will be able to know you're there for the event (and they may ask you to show it before entering certain sections of the park before it is cleared of daytime guests). 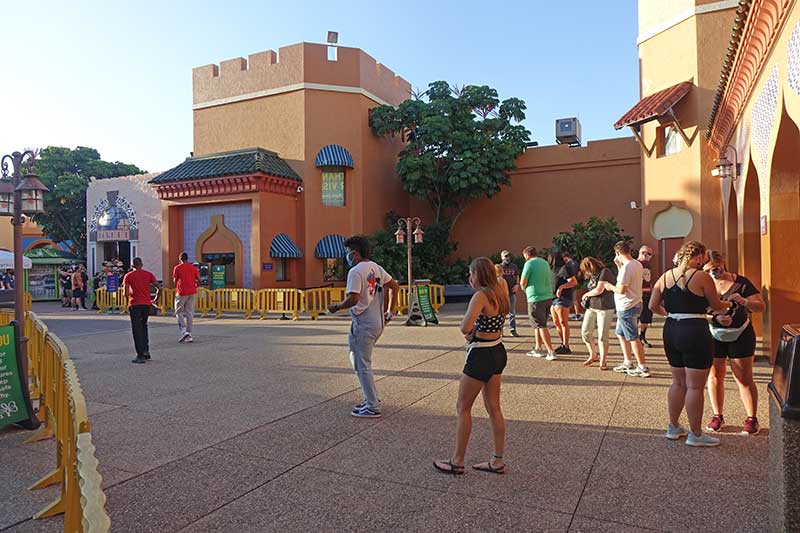 In general, crowds are historically lighter on Sundays and gradually increase as it gets closer to Halloween.

You can now purchase tickets directly through the Howl-O-Scream website. Tickets start at $29.99 per night, and are date-specific so peak nights will be more expensive. Prices also increase as the date gets closer. Advance pricing will not be available after 6 p.m. on the event night at the front gate. At this time, advance online reservations will be required — if you purchase a single-night ticket, the reservation will be included. You must bring both the Howl-O-Scream admission ticket and the park reservation for entry into the event.

If you can't get enough of the scares, the Unlimited Admission ticket is back, which provides admission every night of the event! Reservations are required and you must book separately.

Are you brave enough to enter the haunted houses? This year, two new haunted houses will terrify the bravest of frogs. Plus, three houses from the past will come back from the dead to frighten guests in new ways. We're hoppy to share that we have information about the two news houses already!

Just beyond the rubble and rocks of an unsuspecting quarry and behind a hidden gutter entrance lives a swarm of starving vampires. Prepare to be drawn into their hidden world and uncover the legend of the human uprising as you come face to face with these vicious bloodsuckers with one thing on their mind: revenge. Will you return to the land of the living or are you destined to become the newest minion of the Forgotten undead army?

Welcome to Purgatory Penitentiary where incarceration is just the beginning. These flesh-eating inmates are ravenous and they're not letting you pass without getting their rotting hands on you, their fresh meat. Travel through the prison yard, maximum security and confinement that is anything but solitary as maniacal guards shuffle you down dark and lawless paths for processing. Your only options? Breakout alive or be devoured in detention.

Busch Gardens Tampa Bay is a rather large park that covers a lot of ground, which means plenty of space for the creatures of the night to scare you while you walk around. There are a grand total of 8 scare zones, plus three unpredictable hordes, scattered around the park. Zombies, deranged clowns, werewolves, and more stalk their prey in the scare zones, while the roaming hordes lurk in the darkness. The scare zones for 2021 have not been announced yet, but we'll update once we find out more grisly details! For now, here are the scare zones of 2020 so you have an idea of what you're up against. (Some scare zones return year after year!) 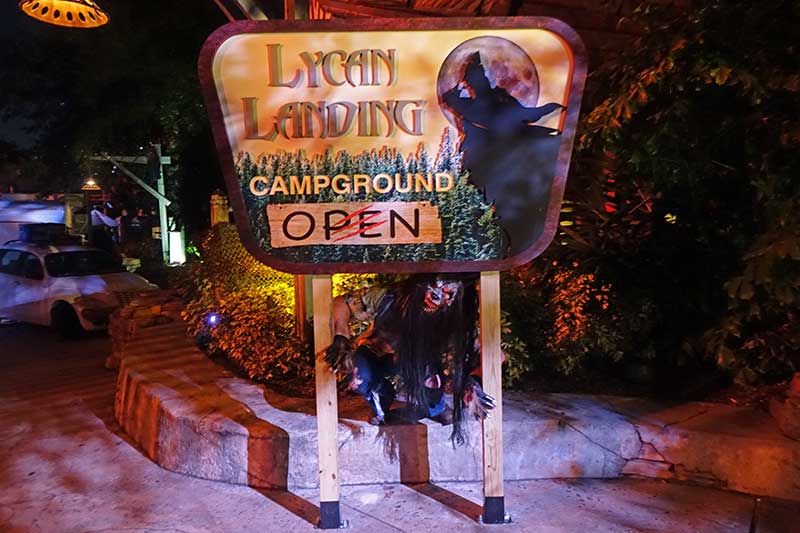 It’s always a full moon at this campground and the park rangers can’t hear you scream. When the campfires burn out, will you escape the glowing eyes leering through the trees or will you share their cursed fate? The most memorable moment from this scare zone was facing a werewolf stroking a dismembered human hand as it hung from its mouth.

Cutting through the cemetery may seem like an easy way out, except when the corpses rise from the ground to invite you into their graves. While the scare actors stayed off to both sides of the narrow pathway, the sidewalk left just enough room for one party at a time. It was a one-way scare zone with a bunch of thrills packed in it, including ghostly figures and terrifying tombstones. 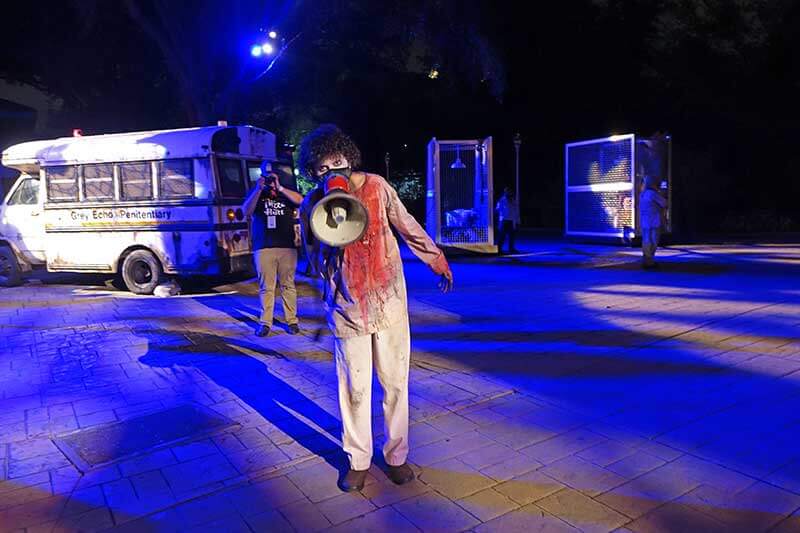 In this treacherous realm, chaos reigned and rules were made to be broken. The escaped inmates of Grey Echo Penitentiary sought their own twisted form of justice and they were ready to deliver your sentence. Some were still protected in their own cells, but others roamed loose for an electrifying good time.

You’ll find more than spare parts as you explore this surly scrap site. Will you make it out in one piece or be devoured by the haunted rubble? Like The Shortcut, The Junkyard was a one-way scare zone, which allowed for some personal time with the inhabitants of the dump. The loud barking dogs and back-up beeping from trucks really added to the junkyard atmosphere. 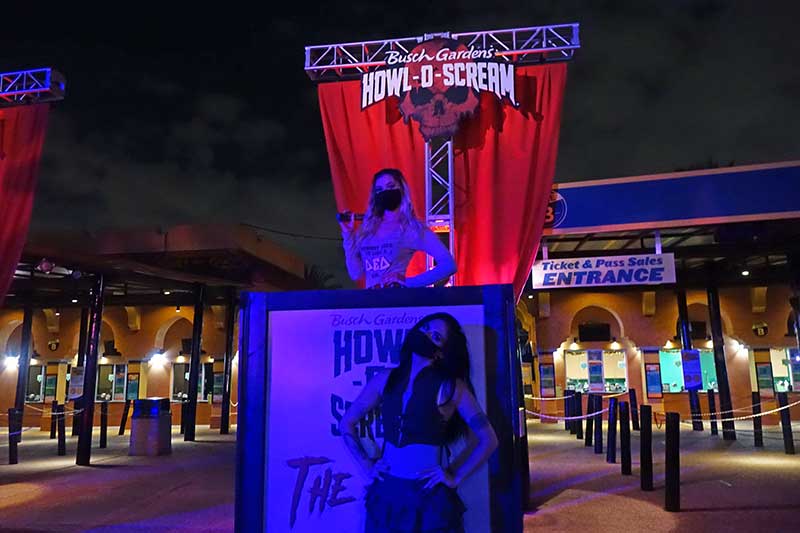 As soon as we hopped off the parking tram, we were already in the middle of the first scare zone. First Fear brought back popular figures from the past, including the mad scientist, Dr. Livingsdoom, who was the very first icon of Howl-O-Scream in 2000. With the possibility of Trickster the monstrous clown sneaking up on us before we even entered the turnstiles, Howl-O-Scream got its first frights in early. 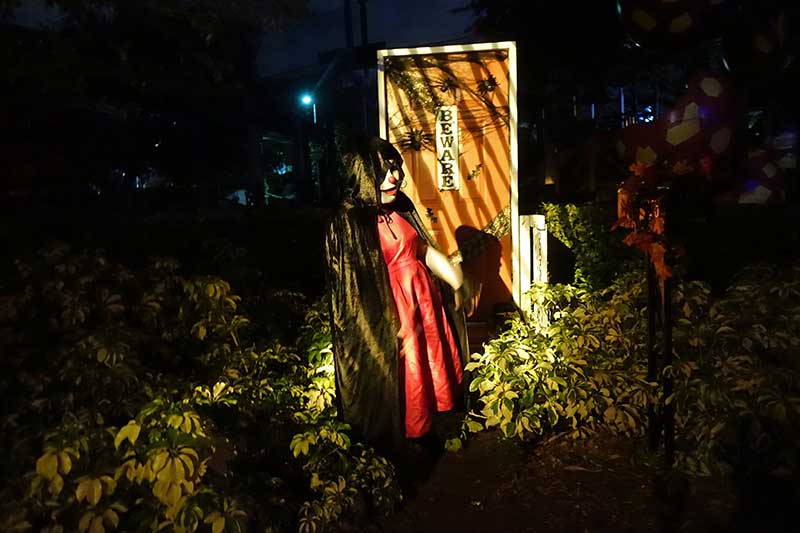 You know when you were little and couldn’t sleep because of the monsters in your closet? This scare zone brought those childhood nightmares to life. In this scare zone, we stared down the small figures, who stood still in front of random ominous doors dripping in blood. The stillness was just as bad as someone jumping out at you.

In a post-apocalyptic world overrun by a zombie biker gang, the survivors planned to destroy anything in their way of getting food and supplies. Bikers zoomed past us and zombies with chainsaws stumbled in our direction as rock music blared into the night. 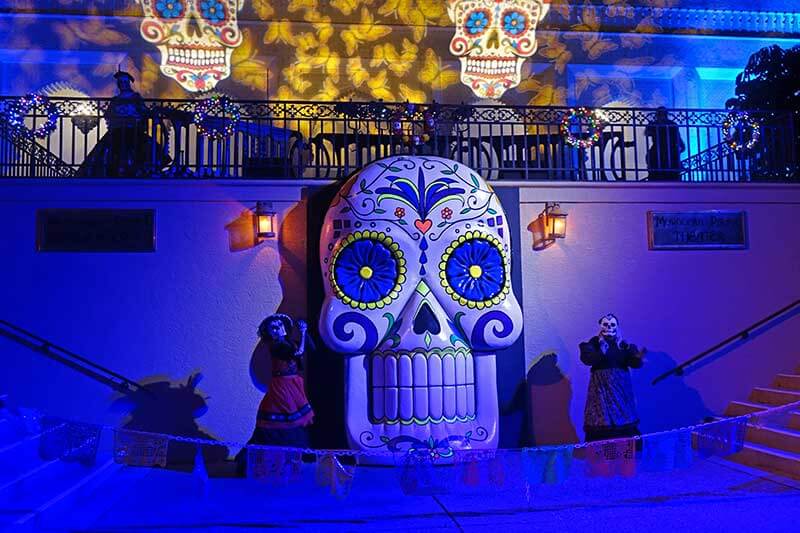 This area was more of a dance party than a scare zone to honor the spirits who have gone before us. While the festive music, elaborate set pieces and colorful lights made it seem a bit out of place, we appreciated the fact that it doesn’t disrespect the Mexican holiday traditions … and that it gave us a bit of a breather.

Crazy clowns have invaded the Pantopia section of the park to wreak havoc once again. In 2019, they were more spread out and lurking behind corners, but for 2020, they stuck to a central area in Pantopia. We only had to muster enough courage to walk through their domain. 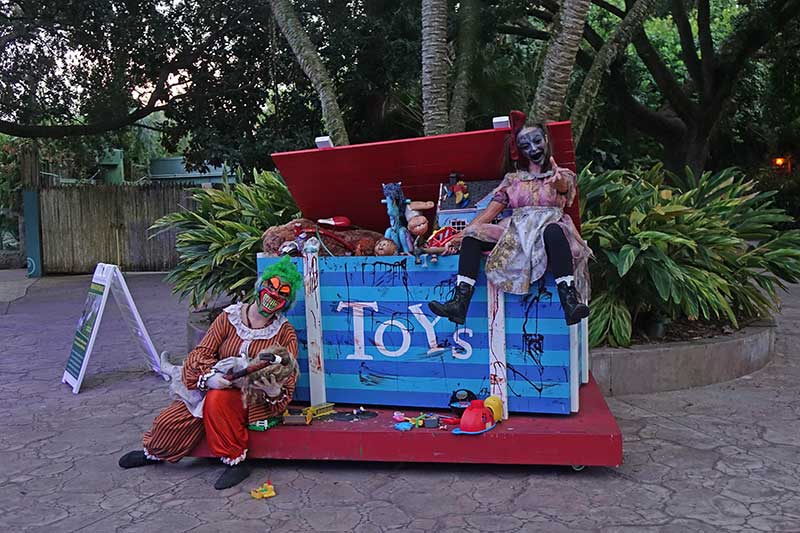 This was another scare zone that ruined childhood memories. We knew we entered the Deadly Toys scare zone once the background noise turned into creepy laughter from children. The life-sized stuffed animals were NOT cute and cuddly but instead creepy and crawly. 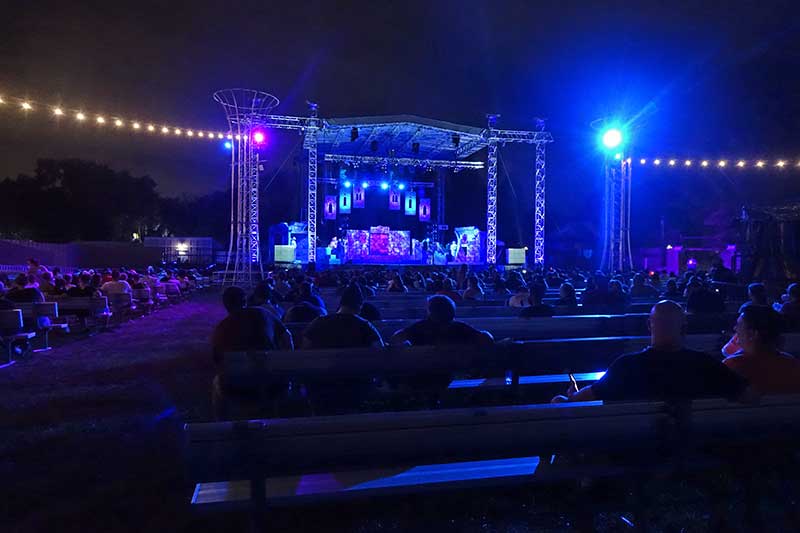 Fiends is the event’s signature stage show, which will take place on the Festival Field Stage for outdoor performances twice each night. Last year's show revolved around Dr. Freakenstein, who hadn't been seen since the quarantine started in the monster world. The comedy show traditionally features raunchy humor and dance numbers, along with the latest pop culture references. Last year, there were lots of social distancing jokes and Dr. Freakenstein carried a large container of hand sanitizer along with him. If any young ones do happen to tag along, it’s best to sit this one out due to its NSFT (not safe for tadpoles) material. 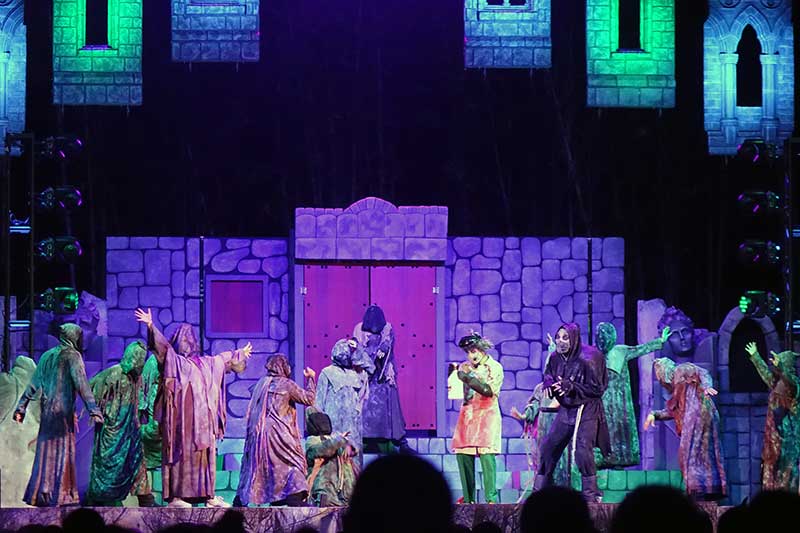 This skeleton band rocks out to classic rock anthem covers at the Dragon Fire Grill. Enjoy the live performance while fueling up on a pre-fear feast.

Can’t get enough screams from the haunted houses and scare zones? Busch Gardens’ most popular thrill rides are open during the event, including the latest ride, Tigris! Here’s a full list of the rides that were available during the 2020 event:

Last year, when we needed a break from the scare zones, we hopped on our favorite coasters. Wait times were low throughout the night, especially later. We walked right on to Sand Serpent and spent 10 and 15 minutes in line at SheiKra and Tigris, respectively. 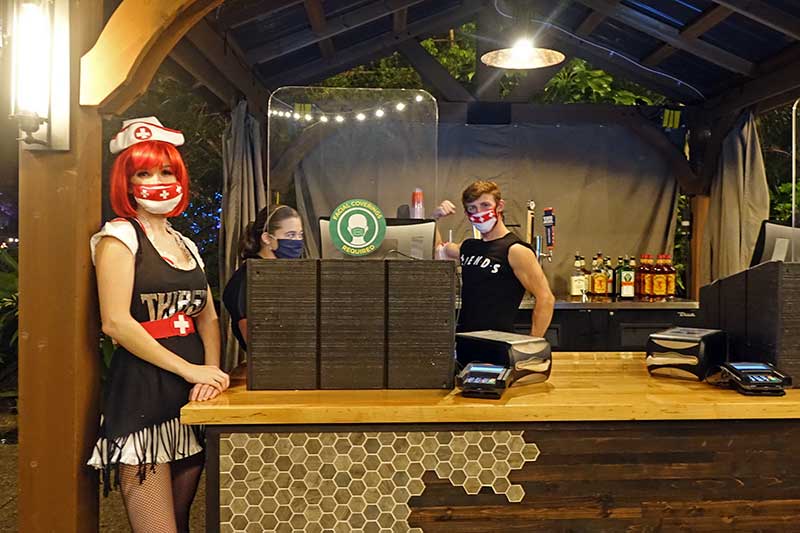 Howl-O-Scream typically has food and drink booths around the park. Last year, the Fiends show had its own bar at the Festival Field Stage. Some of the restaurants such as Zagora Cafe usually remain open as well. The event's infamous alcoholic shots in syringes return year after year, so you can use that liquid courage to fuel an adrenaline rush that's needed for the haunted houses and scare zones.

You can also usually find event merchandise at the Emporium located near the park's entrance. This gift shop is where you can peruse all of the event souvenirs, including T-shirts, baseball caps, shot glasses and more. 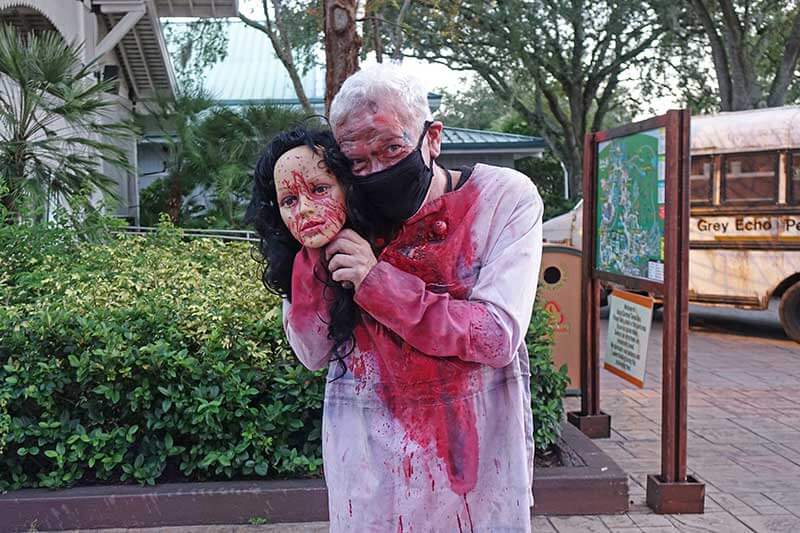 Since Howl-O-Scream requires a separate ticket from regular park admission AND a park reservation, be sure to purchase your tickets early online. Not only will this save you from waiting in line at the entrance, but you can also keep extra cash in your wallet. Additionally, you don’t want to wait in case the event sells out for the night.

Leave the tadpoles behind

Based on the violence and gore, the event is targeted for adults. We typically leave Lily and Tad behind with the grandfrogs! While teenagers and children are allowed to attend, we do not recommend it for tadpoles younger than 13.

Despite the sun going down, the hot and humid Florida weather keeps September and October nights warm. Dress in clothes that allow you to stay cool, and opt for comfortable shoes. Avoid wearing costumes or full-face masks. For the safety of the scare actors and other guests, costumes are not allowed.

I may be stating the obvious, but be aware of your surroundings as you walk through the scare zones. The scare actors like to get super close to you (last year, they kept their distance, but some still roamed freely). But they will not touch you, and you should not touch them. Also, listen closely to what they have to say because they like to improvise. Be courteous of fellow guests too. You may have the gut instinct to run away at the sight of a clown, but you have to be careful not to bump into anyone else.

Pose for a frightfully fun picture 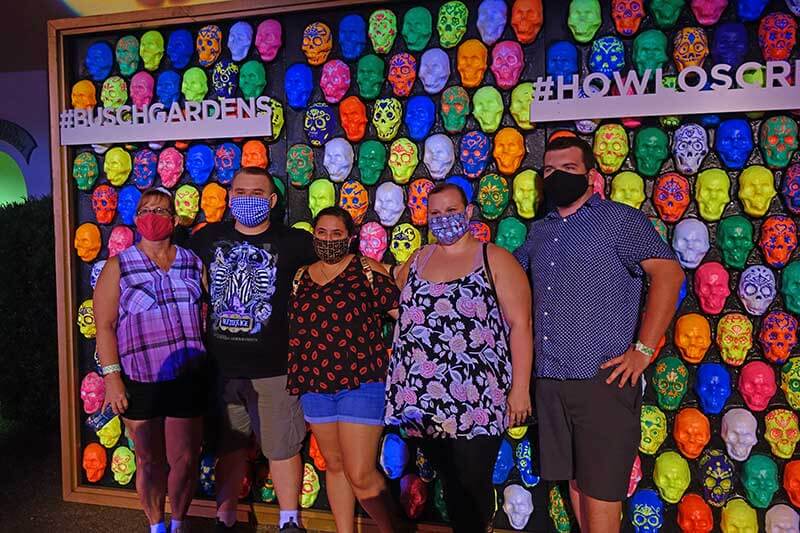 There are event-exclusive photo ops scattered around the park. Last year, our favorite was the colorful skeleton head wall at the Dia de los Muertos scare zone!

Are you building up enough courage to go to Howl-O-Scream at Busch Gardens Tampa Bay? If so, let us know what you're most excited for! 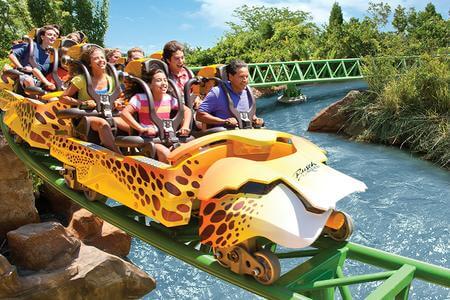 SAVE $25 vs Gen. Admission gate price