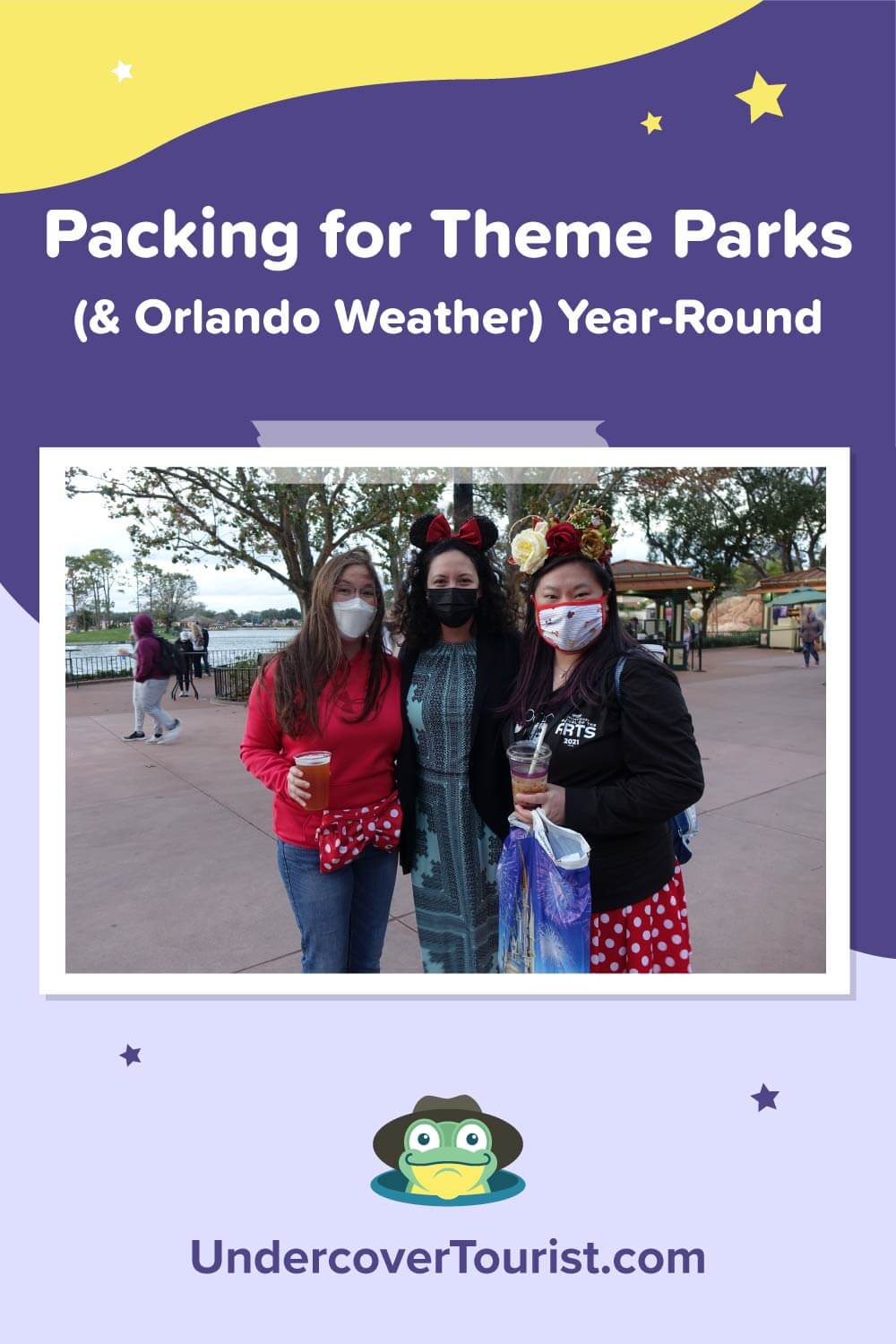 Hip hop hooray! It’s the final countdown to your vacation and you’ll soon be on your way to Orlando! But first, you need to pack your suitcases, and researching the weather is crucial as you plan out what to wear. You don’t want to be too hot or too cold (it’s rare, but Florida can get chilly during certain parts of the year!). Otherwise, you may end up with surprise souvenir shirts, shorts or sweaters, which can be a rather costly mistake if you weren’t planning on it. Take it from us … one time we ended up buying Hogwarts house sweaters on a particularly cold day at Universal Orlando. We love them, but it pushed us over our trip’s budget (ouch). In this guide, we’re breaking it down by the weather in each season, so you know exactly how to pack for Disney World, Universal Orlando and other Florida theme parks.

How to Pack for the Orlando Theme Parks Year-Round

We’re kicking it off with summer since that’s when most frog families plan their vacations. It also hoppens to be the most consistent season in terms of weather expectations. Two words: hot and humid. The average high temperatures reach the low- to mid-90s Fahrenheit (mid-30s Celsius), and the average low temperatures remain around the mid-70s Fahrenheit (mid-20s Celsius). Humidity levels can also get as high as 80 percent, which can make it feel even hotter than it really is. Temperatures generally peak in the afternoon, so we recommend hitting the parks early. Remember to drink lots of water to stay hydrated and take frequent breaks, perhaps even a longer break in the afternoon when it’s the hottest part of the day. Plan for opportunities to cool off, whether that's in the AC, shade or pool.

By June, Florida’s wet season is in full swing. Despite its nickname as “The Sunshine State,” Florida is also known for its summer afternoon thunderstorms. Typically, the storms form in the afternoon and pass through the area quickly, only lasting about an hour or so. However, it can be a daily occurrence, so expect to be caught in a brief thunderstorm any day you’re visiting. Usually, the rain does help with cooling down the rest of the day once it passes through. June is also the beginning of hurricane season, which lasts until November. While it’s important to keep the potential of a tropical storm or hurricane in mind, Orlando is landlocked, so the chances of a direct hit with full force are low. The theme parks rarely shut down in advance of severe weather. 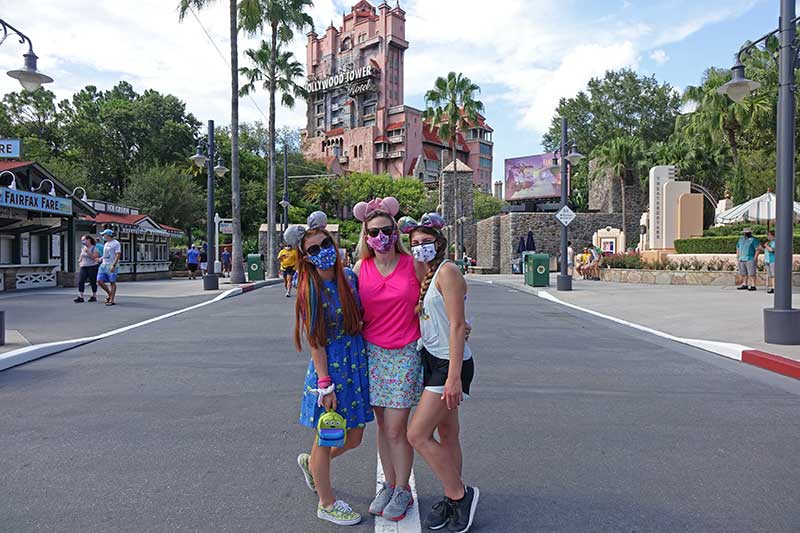 While other parts of the country start to cool down in September, Florida does not. The weather continues to be hot and rainy, but temperatures start to become slightly less intense with an average high in the high-80s Fahrenheit (low-30s Celsius). Meanwhile, the average low temperature remains in the low-70s Fahrenheit (low-20s Celsius). Peak activity during the hurricane season typically occurs from late August to early October. But again, the likeliness of a direct hit with full force remains slim.

It starts to cool down a little bit more in October, but the average high is still around 85 degrees Fahrenheit (30 degrees Celsius). Depending on where you’re from, the weather may seem unusually hot for that time of the year! The average low temperature is about 67 degrees Fahrenheit (19 degrees Celsius), meaning you may experience some cooler nights and early mornings. However, during the day, it can still get pretty warm outside. Humidity levels and average rainfall also begin to decline during this time.

By November, the rainy season finally comes to an end. Not to say that it won’t rain at all during your trip, but the pattern switches from daily afternoon storms to longer rainy days due to cold fronts. It’s moderately warm during the day with an average high of 80 degrees Fahrenheit (25 degrees Celsius), but it may get chilly once the sun goes down, as well as early in the mornings, with an average low of 60 degrees Fahrenheit (15 degrees Celsius). At this time of year, there aren’t too many cold fronts that pass through, but November normally has at least one or two that force us to break out our sweatshirts and jackets during the day. 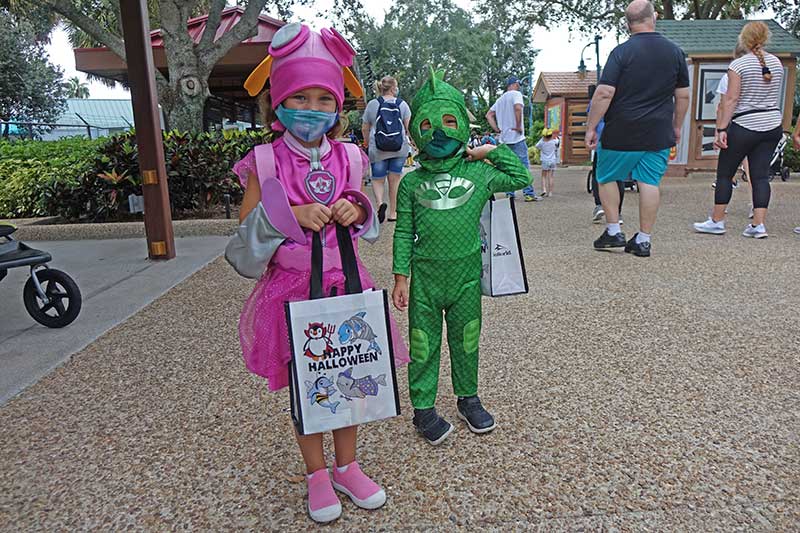 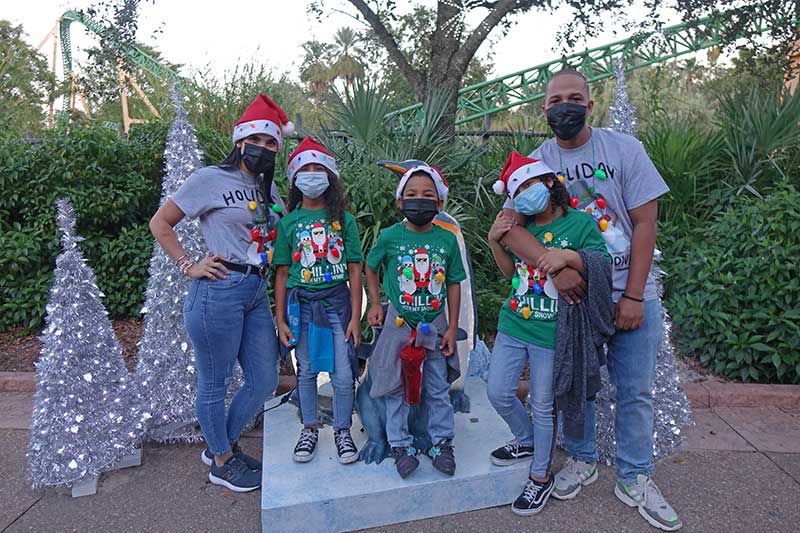 The weather during Florida’s winter season can be unpredictable. Some days may have the most perfect weather — sunny and warm with a slight breeze and lower humidity. But the very next day, it could be cloudy and rainy as a cold front passes through and then the temperatures drop drastically overnight. It rarely stays below freezing temperatures, but that doesn’t mean it won’t feel cold! In fact, Florida’s low winter temperatures actually tend to feel colder, compared to the same temperature in a drier climate, all thanks to humidity & how the moisture evaporates off your skin. It’s the same line of reasoning for why summer temperatures may feel hotter than the temperature really is, compared to the same temperature in a drier climate.

In contrast to the anticipated summer rain patterns, winter rain is also less predictable. There are much lower chances of rain since it’s Florida’s dry season. However, if it does rain, it can vary on how long it’ll last and when it happens. During the winter, it might stay cloudy all day and rain off and on — or it could pass through quickly, leaving only half a day with not-so-ideal weather. It could be a light, gentle rain, or it may be a thunderstorm. Rain can hoppen at any time (just this past winter, thunder woke us up at 6 a.m. one morning!).

The varying weather makes it much more difficult to pack for Disney World. We suggest preparing for anything and everything, but wait to make any final decisions until right before you leave. That way, you can double-check the weather forecast to see if there are any cold fronts on the horizon. January is Florida’s coldest month of the year with an average high of 70 degrees Fahrenheit (20 degrees Celsius) and an average low of 50 degrees Fahrenheit (10 degrees Celsius). 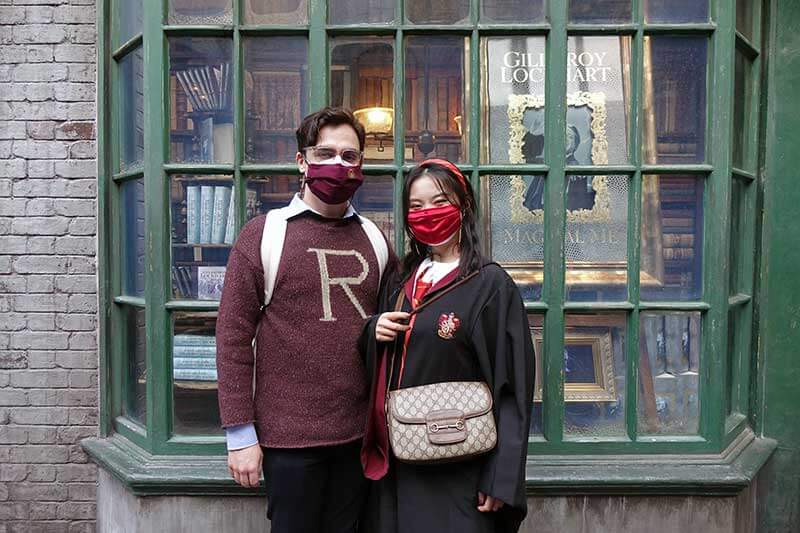 Based solely on the weather, springtime is our favorite time of the year to visit Orlando, particularly March and early April. It starts to warm up consistently after the winter months and cold fronts hoppen less frequently, but it’s not quite scorching hot yet. There aren’t too many rainy days either, and the humidity is lower.

Perhaps the most challenging part of springtime weather is that temperatures rise and fall quickly like a roller coaster in a single day. It may start out as a cool morning, then temperatures reach their peak in the afternoon and finally ends as a chilly evening after the sun goes down. March will be the most unpredictable in this way. By the time May rolls around, warmer weather will be more consistent as it transitions into the hot, summer months. 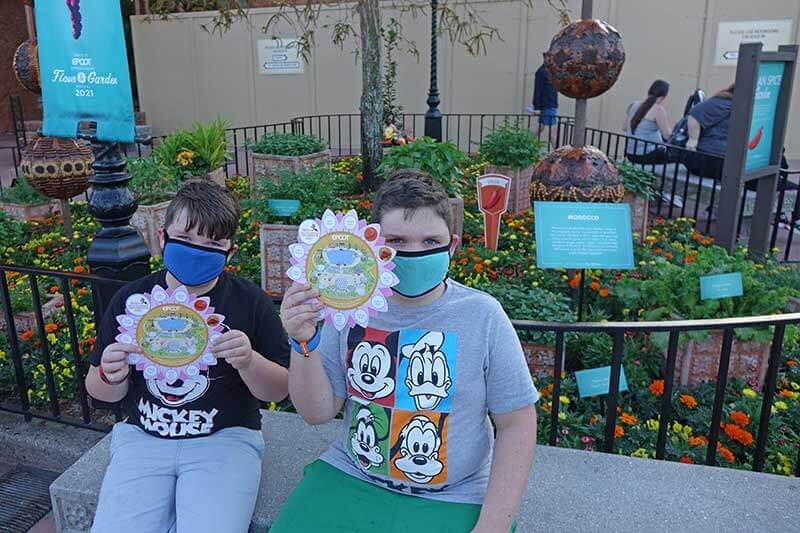 Overall, Central Florida has a subtropical climate, so you can expect warm temperatures year-round. It's super important to research the weather, so you're able to pack for Disney World and other Florida theme parks accordingly. What is your favorite season to visit?

Related: Our Favorite Ways to Beat the Heat at Disney World

Related: What to Do on a Rainy Day at Disney World