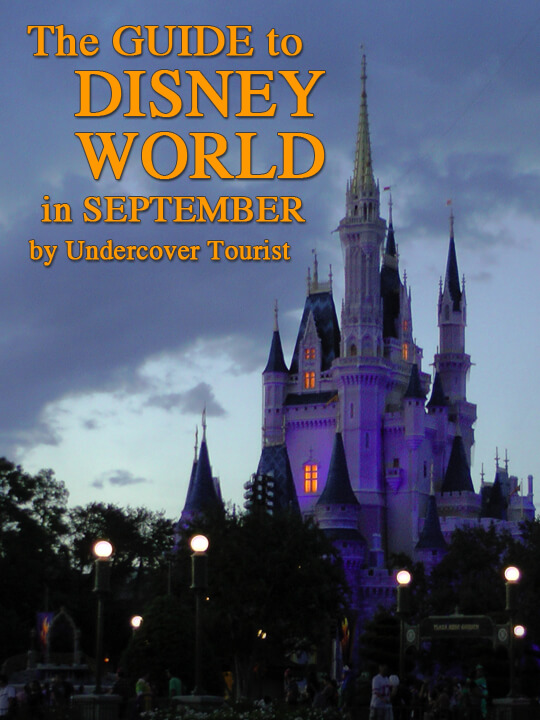 September is hands down, unequivocally the very best month to visit the Orlando theme parks. At least, we sure think so. With the tadpoles back in school and the summer crowds long gone, touring the theme parks takes on a less harried pace and you can truly savor the experience. Plus, the two biggest and best events at the Walt Disney World Resort -- Mickey's Not So Scary Halloween Party and the Epcot International Food & Wine Festival -- kick off in September.

Those of you who are already planning next year's trip to Disney World may be wrestling with the question of whether to pull the children out of school, and with the lower crowd levels in the off-season, it's definitely worth consideration. We know this is a personal decision, and we won't judge you either way :)

Even in September, there are extended theme park hours for many of the parks, so there is plenty of touring time to take advantage of. If you are bringing the children, we recommend touring early, taking a break in the afternoon (to dodge potential downpours) and then coming back to the parks in the evening for as long as your little ones can handle it.

What's new in the parks 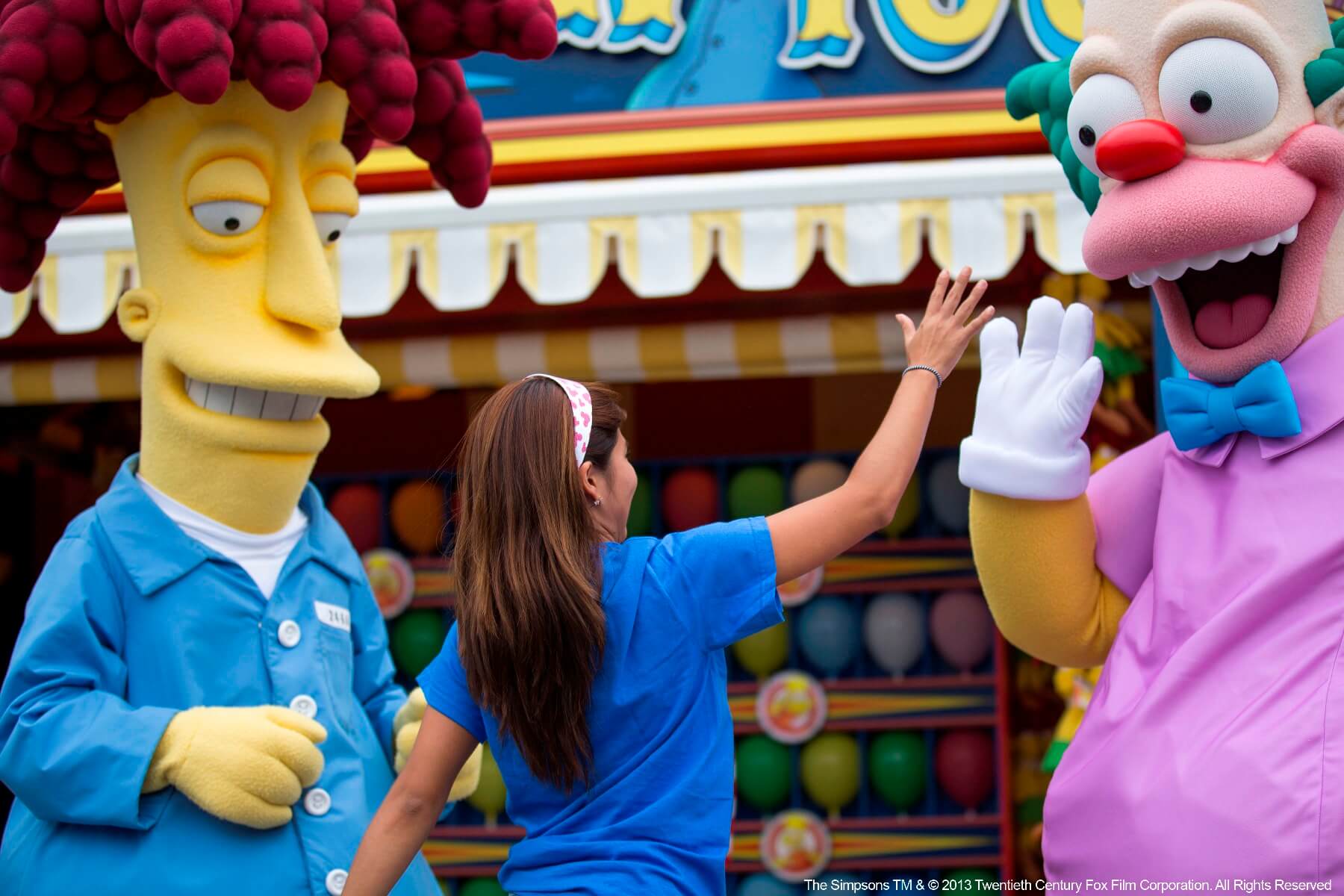 Seemingly overnight, Universal Orlando opened up a whole new land around The Simpsons Ride in Universal Studios. Yes, you can now visit Springfield U.S.A., perhaps kicking back with a Duff Beer and enjoying a Krusty Burger. It's likely that you'll rub elbows with the Simpson clan on your visit, and you might even run into Krusty the Clown or Sideshow Bob. After you've ridden Springfield's signature attraction, be sure to go for a spin on Kang & Kodos' Twirl 'n' Hurl.

In addition to Springfield U.S.A., Universal officially opened TRANSFORMERS: The Ride 3D in June. This attraction features amazing effects and will have you battling alongside Bumblebee and Optimus Prime to take on the Decepticons. We've added wait times for this attraction (as well as Kang & Kodos) to our app -- make sure you download it before you leave home! We still recommend making Despicable Me: Minion Mayhem your first stop in Universal because of its lower loading capacity. 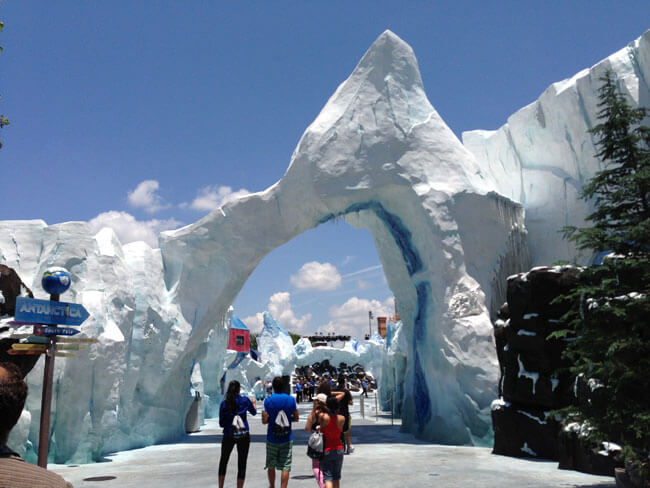 Over at SeaWorld Orlando, Antarctica: Empire of the Penguin is still getting brisk attention! This combination attraction, exhibit and area is one of the most immersive and authentic experiences we’ve ever encountered in a theme park. Still, no one likes a 2-hour wait for a ride. Thankfully, with the lower crowds in September, we expect waits for Empire of the Penguin to drop significantly. We recommend following the suggestions outlined for reducing your wait time at SeaWorld's Antarctica. Also, don't forget to check out Tad's video of the new area, the ride, the restaurant Expedition Cafe (which is like three restaurants in one!) and Glacial Collections, the shop which sells the cute-as-a-penguin, customizable Cup That Cares. 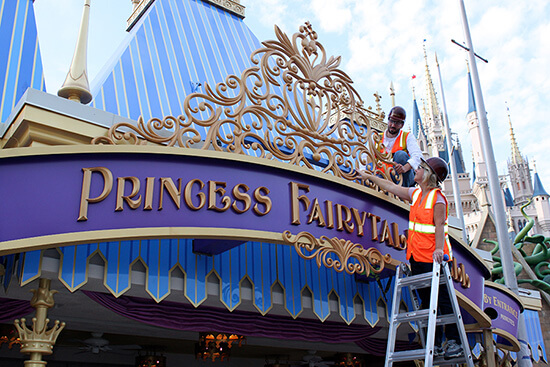 Some time this fall, perhaps as early as Sept. 18, Princess Fairytale Hall will open inside Magic Kingdom® Park. Cinderella, Rapunzel and other Disney princesses will hold court in the royal digs, greeting guests, signing autographs and posing for pictures. Princess Fairytale Hall is tucked behind Cinderella Castle in New Fantasyland, where you'll also find a number of new Magic Kingdom attractions, including Enchanted Tales With Belle, and Under the Sea ~ Journey of the Little Mermaid and the now-under construction Seven Dwarfs Mine Train roller coaster (scheduled to open in 2014).

Want to know what else is new? Look no further than Tad’s exhaustive list of what's coming to the parks in 2013 (which just keeps growing and growing). And if you're planning a trip for next year, be sure to check out the 2014 list. 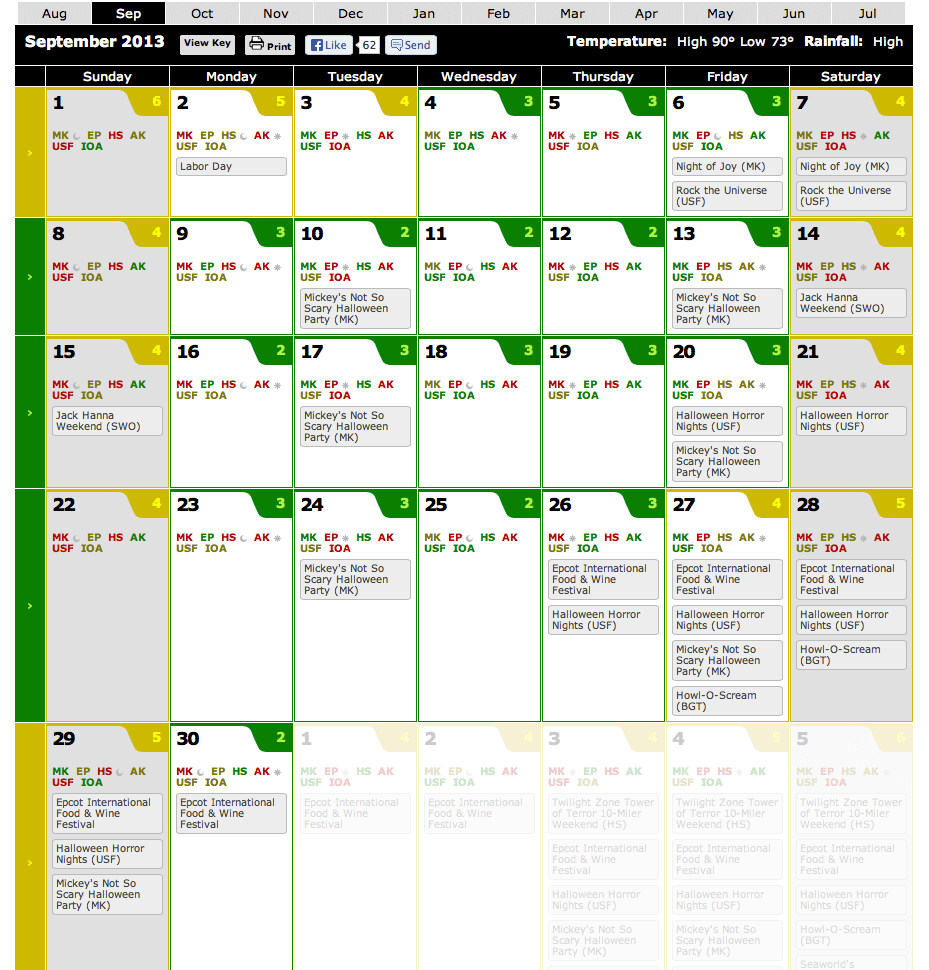 The very lowest crowds of the year can be found in September, with the majority of the month seeing low crowds and the rest of the month seeing medium crowds. We still recommend reading our post on the SECRET to Avoiding Disney World CROWDS and downloading our wait-time apps, which now includes Fastpass return times, before you head to the parks.

Predicted best days of the month to visit (and recommended parks)

This month, there are a number of closures at Magic Kingdom® Park, including Jungle Cruise, Space Mountain, the Walt Disney World Railroad and Peter Pan. At Disney's Hollywood Studios, the Honey I Shrunk the Kids Playground will be closed most of the month starting Sept. 3. At Universal Studios, Fear Factor Live is closed for seasonal maintenance. For more details and a list of all refurbishments, check our closings page.

If there is one drawback to September, it's the weather. While temperatures are on the decline, the average high remains 90, with high rainfall chances. And it is hurricane season. Yes, it's quite likely you will encounter an afternoon shower in September, but the good news is that it generally clears up after an hour or two. Here is the packing list for this time of year.

There are a ton of events happening in September, and quite a few major events. Here's the rundown of what's happening this month. Be sure to check out special events pages for Disney World, Universal Orlando and SeaWorld Orlando for full details.

Will you be visiting in September? What questions do you have for us?