Slow It Down & Enjoy the Little Things at Disney's Hollywood Studios

It is so easy to get caught up in full-on "Disney mode." By definition, "Disney mode" is the state of soaking up all things "Disney.” A person in this mode will disregard sleep, walk like they are on a mission, and literally squeeze every nickel and dime out of their vacation. When we find ourselves in this mode, it is important to force a slow down. You don't want to overdo it at Disney! Today I am sharing with you some practical ways to slow yourself down at Disney's Hollywood Studios. These ideas are things that many guests have never thought to do. So, if you find yourself on fast forward at Disney World, check out this list and use it to make way for a little slow it down time. 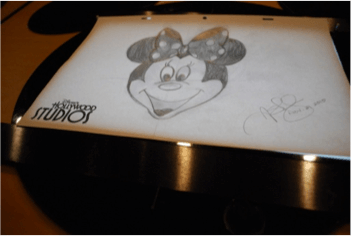 I am always surprised by how many people have no idea about the Magic of Animation located in Hollywood Studios Animation Courtyard! So, if you have never heard of this awesome attraction, here's the idea: Guests take on the role of animator in this 20-minute experience. Join a cast member as they take even the most novice artist through the process of animating a beloved Disney character. The best part? You'll leave with a free souvenir ... your drawing!

I chose this as a good slow-down spot because: It allows you to sit, you aren't technically missing out on anything, there is air conditioning, and you get a freebie of sorts! 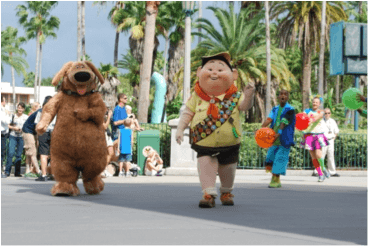 This probably seems like a no-brainer. But, here again, I am always shocked by the amount of people who see parades and shows as a waste of time and money. I am here to fight for the parade/show scene! Some of my best photos and memories come from my role as spectator in parades/shows. At Disney's Hollywood Studios, I especially enjoy the Pixar Pals Countdown to Fun parade as it features Pixar characters! Come celebrate with Sulley, Woody, The Incredibles and my favorite Russell from Up! as they make their way down the streets of Hollywood Studios!

I chose this as a good slow-down spot because: It allows you to sit (if you are early enough), you aren't technically missing out on anything, you can find a shady spot for viewing, and you'll rack up on memories!

Stop and play for a spell! 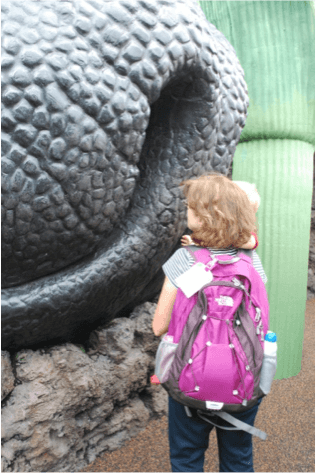 Disney is a place where everyone can be a kid.  Seriously, if you haven't experienced this yet, then let your hair down and hug a character! There is really no better way to do this than to play like a kid! I encourage everyone I know to stop by to play at the Honey!  I Shrunk the Kids Movie Set Adventure. This is basically a large play area themed around the Honey! I Shrunk the Kids! movies. This area really does take you into a larger-than-life world! You'll slide down film strips, be sniffed by an enormous dog, crawl through spider webs and more!  I like that this area encourages you to stop and explore.

I chose this as a good slow-down spot because: It allows you to sit/stand/play, you aren't technically missing out on anything, you can find shady spots and get cooled down by some water play areas, and you'll get lots of great pictures!

Stop and see the Citizens! 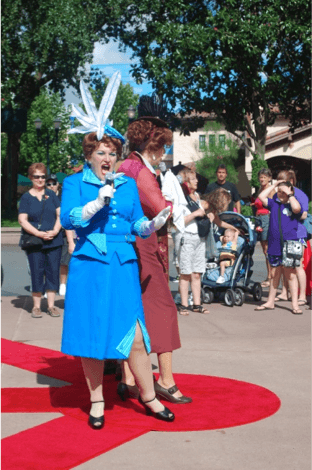 I've saved what I consider to be the BEST for last! That's not to say that I don't like the other ideas, but I LOVE, LOVE, LOVE the Citizens of Hollywood. Now, you might be asking, OK Ashley, what is that? The Citizens of Hollywood are only the BEST streetmosphere this side of Hollywood! The idea here is that a group of former stars, aspiring actors, agents and public works officials (and more), live and entertain on the streets of Hollywood (Hollywood Studios).  These talented actors provide an array of entertainment, from skits filled with hilarious improv to the many talents they each hold. This group of actors fills the streets with an atmosphere incomparable to any other (hence the name streetmosphere). You can find them performing throughout the streets of Hollywood Studios. Trust me, you'll know them when you see them!

I chose this as a good slow-down spot because: It allows you to sit/stand/enjoy, you can become a part of the show, you aren't technically missing anything, you'll develop an appreciation for the talent that is this group, and you'll have tons of pictures and laughs!

I hope this list will equip you to turn off auto-pilot Disney mode. Even if you just try one of the suggestions, I think you'll find that this will really benefit you in the end. Taking time to force a slowdown will allow you to soak in all that Hollywood Studios has to offer … think quality of quantity for that time!

So, now it is your turn! Do you slow down? What are your must do's for a slow down? Leave your suggestions in the comment section below!  We would love to hear from you! Join me next time for a look at how you can slow things down and enjoy EPCOT! Until then ... keep it magical!

Ashley is the author of Disney: Done Right Blog and a writer for Chip and Co. You can find her on Facebook and Twitter!