Star Wars: Galactic Starcruiser Is Here — Here's What We Know About the Immersive Experience 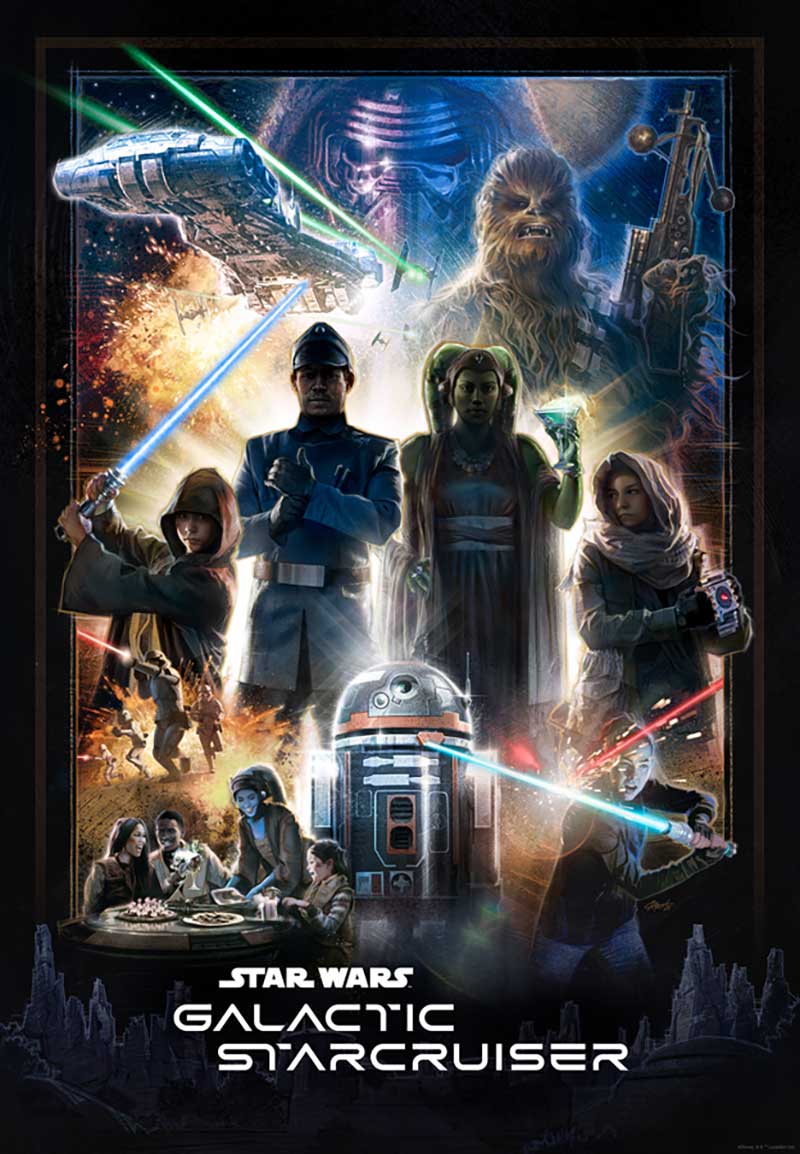 May the frogs be with you! The Force is strong with us for the opening of Star Wars: Galactic Starcruiser. The hotel launched March 1, 2022, and bookings are available for dates up through September 2022. This immersive hotel experience includes incredible story elements and the ability for guests to attend in full costume. We have our Jedi robes at the ready!

With the opening of Star Wars: Galaxy’s Edge at Disney’s Hollywood Studios, Disney gained a toadally immersive land that allows "Star Wars" fans to travel to a galaxy far, far away. We thought it couldn’t get any better after Star Wars: Rise of the Resistance started launching Batuuan visitors into an epic battle against the First Order. But the Force is even stronger at Disney World now that Star Wars: Galactic Starcruiser has taken flight for the first time!

As a highly themed experience, Star Wars: Galactic Starcruiser will not be any ordinary Disney Resort hotel. You become the hero of your own "Star Wars" story during a two-night stay aboard the starship, the Halcyon. Imagine sleeping among the cosmos, eating otherworldly food, and best of all, creating your own intergalactic adventure just like (and maybe even beside!) your favorite "Star Wars" characters! Here’s everything we know about this ultimate "Star Wars" vacation experience.

As of March 1, 2022, guests can embark on a two-night adventure aboard the Halcyon, which is known throughout the galaxy for its exotic expeditions. All guests arrive and depart Star Wars: Galactic Starcruiser at the same time, similar to Disney Cruise Line. Once aboard, guests stay in one of 100 passenger cabins, experience onboard dining, take a trip to Batuu and more. Throughout the journey, guests become part of the action by participating in activities and interacting with characters, crew members and fellow passengers as their individual stories unfold.

Star Wars: Galactic Starcruiser is located right near Disney’s Hollywood Studios … so close that we can’t imagine it’ll take more than one lightspeed jump to get to Batuu! Guests should arrive between 1 p.m. and 4 p.m. on the day of departure into space.

Once guests arrive at the Galactic Starcruiser Terminal and check in, they enter the Launch Pod that blasts them into space. Looking out of the overhead window, guests can watch as the Launch Pod leaps into hyperspace and draws closer to the Halcyon. When the Launch Pod docks, guests emerge into the Atrium, the main deck of the Halcyon, where the crew welcomes them aboard. 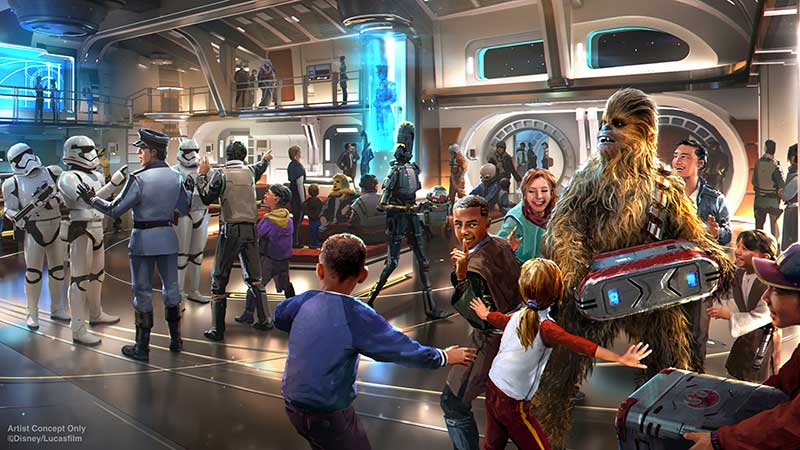 The part that excites us the most about the Galactic Starcruiser is how immersive it is! Guests can explore the entirety of the Halcyon, everywhere from the Bridge to hidden spots in the Engineering Room. Under the crew’s guidance, passengers can learn how to operate the navigation and defense systems when taking a tour of the Bridge — skills that may just come in handy later during the journey. Guests can also sneak into the Engineering Room to discover the ship’s inner workings … or to hold secret meetings. Droids and Stormtroopers roam about in the Atrium, and guests can join Chewbacca for a covert mission. (You can count on us, Chewie!)

Guests can stay connected to the thrilling story unfolding with the Play Disney Parks app on their phones. The Star Wars: Datapad allows guests to check their itinerary as well as receive communications from the crew. Depending on the choices you make, you may receive messages for secret meetings!

Not only are you living your own "Star Wars" adventure, but also you can dress the part as guests are allowed to wear full costumes while onboard the ship! Guests are encouraged (though not required) to dress in whatever role they want to fill, from Resistance fighters to First Order members. You can even come in alien form with colored body paint if you want to! (It's also toadally OK if you dress up on the first day but wear regular clothes the next.) We are so excited to see everyone's creativity! There is also an exclusive merchandise line you can only purchase on the Galactic Starcruiser. The Chandrila Collection holds a wide variety of themed outfits and accessories. There are lots of commemorative souvenirs to take back home to Earth, including a new remote-controlled droid. You can even customize your lightsaber hilt with a letter in Aurebesh (the written alphabet in the "Star Wars" universe).

Several "Star Wars" characters join along in this epic adventure. Train with Rey, or fight against Kylo Ren! Both familiar and new characters are on board, including the ship's charismatic captain, a mechanic and a galactic superstar! Captain Riyola Keevan leads the voyage and is known for being cool under pressure (you'll recognize her a lot for her distinct blue skin!). New droids, a cruise director and First Order soldier also become part of the adventure. It's up to you — either help the First Order, the Resistance or watch what unfolds! 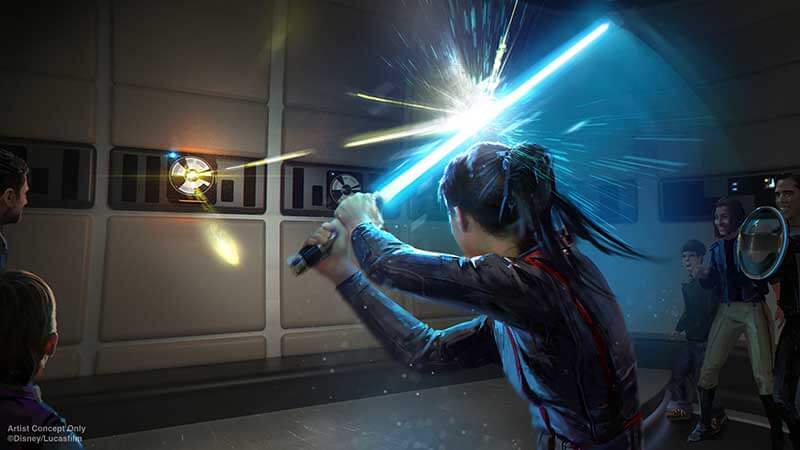 Another themed experience aboard the Halcyon is lightsaber training. WITH A NEW TYPE OF LIGHTSABER. The lightsaber can activate right before your eyes, with the blade forming from hilt to tip. Tadpoles at least 7 years old and frogs alike have a chance to wield their own lightsaber. Once it's forged, they can practice their skills against a training remote. Toadally awesome, right?! After all that hard work, guests can relax at the Silver C Lounge, a stylish lounge that offers a warm retreat for passengers of all ages. 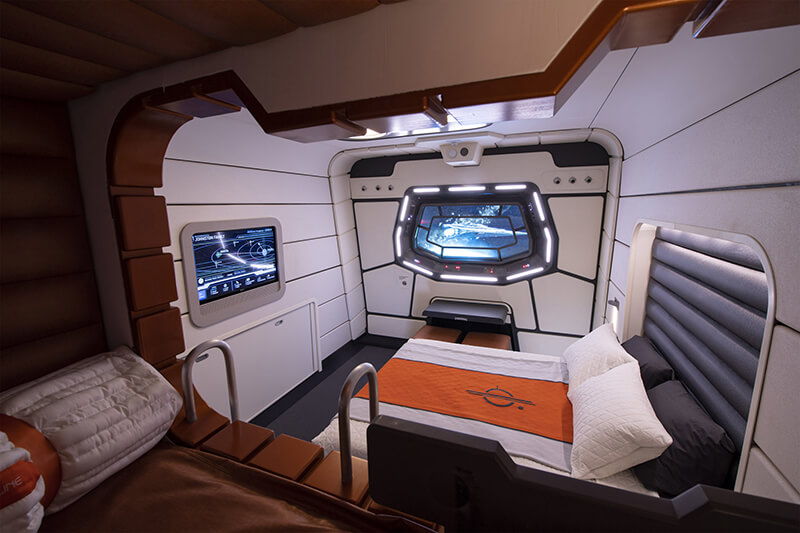 Don’t expect any "real world" views of Earth while you’re aboard the Halcyon. Every window, including those in each passenger cabin, has ever-changing galactic views as the starship sails through space. Speaking of passenger cabins, each cabin can sleep up to five guests. Tadpoles will love sleeping in the space bunk beds!

Enjoy an out-of-this-world dining experience at the Crown of Corellia Dining Room — a nod to the planet known for its shipyards where the Halcyon and the Millennium Falcon come from. The dining hall serves breakfast and lunch before transitioning into a multi-course menu for dinner. On the first night, the dining room transforms into a table-service supper club with a special musical appearance by a superstar singer. For the second night, the "Taste Around the Galaxy" dinner showcases a variety of dishes from planets throughout the galaxy. The food is specially crafted for the experience with out-of-this-world dishes inspired by the "Star Wars" universe. For an additional fee, dine at the Captain's Table at the center of the Crown of Corellia Dining Room for an added experience. Throughout the day, relax at the Sunlight Lounge and sip beverages while trying your hand at a game of holo-sabacc. 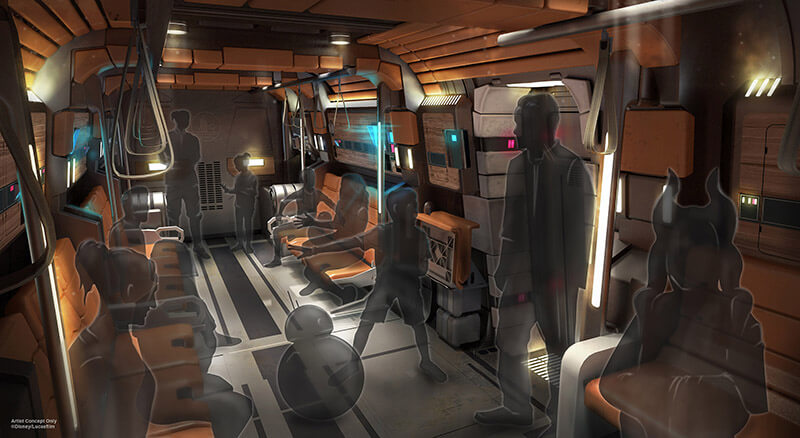 Guests also go on a planet excursion to Batuu with exclusive transport to Star Wars: Galaxy’s Edge, emerging straight into the land. Travelers also have the opportunity to pilot the fastest hunk of junk in the galaxy on Millennium Falcon: Smugglers Run, and join the epic battle against the First Order on Star Wars: Rise of the Resistance. Enjoy a meal at Docking Bay 7 or other select quick-service locations at Hollywood Studios. The choices that guests make will affect their overall experience, both aboard the Halcyon and while roaming around Black Spire Outpost. The Coaxium you get for Hondu aboard the Millennium Falcon? You'll find out who the buyer is, and it may come in handy back on the starcruiser.

Star Wars: Galactic Starcruiser is a first-of-its-kind experience that takes immersive storytelling to a whole other level. Guests can choose to participate as much or as little as they would like. Go in full costume with a full background story or just sit back, relax and enjoy the live theater unfolding around you. Everyone will have their own unique experience, and that's what makes it so frogciting!

Star Wars: Galactic Starcruiser promises a galactic voyage unlike any other. What are you most excited about? Let us know if you'll hop aboard the Halcyon!