Everything to Know About Star Wars: Rise of the Resistance at Disney World 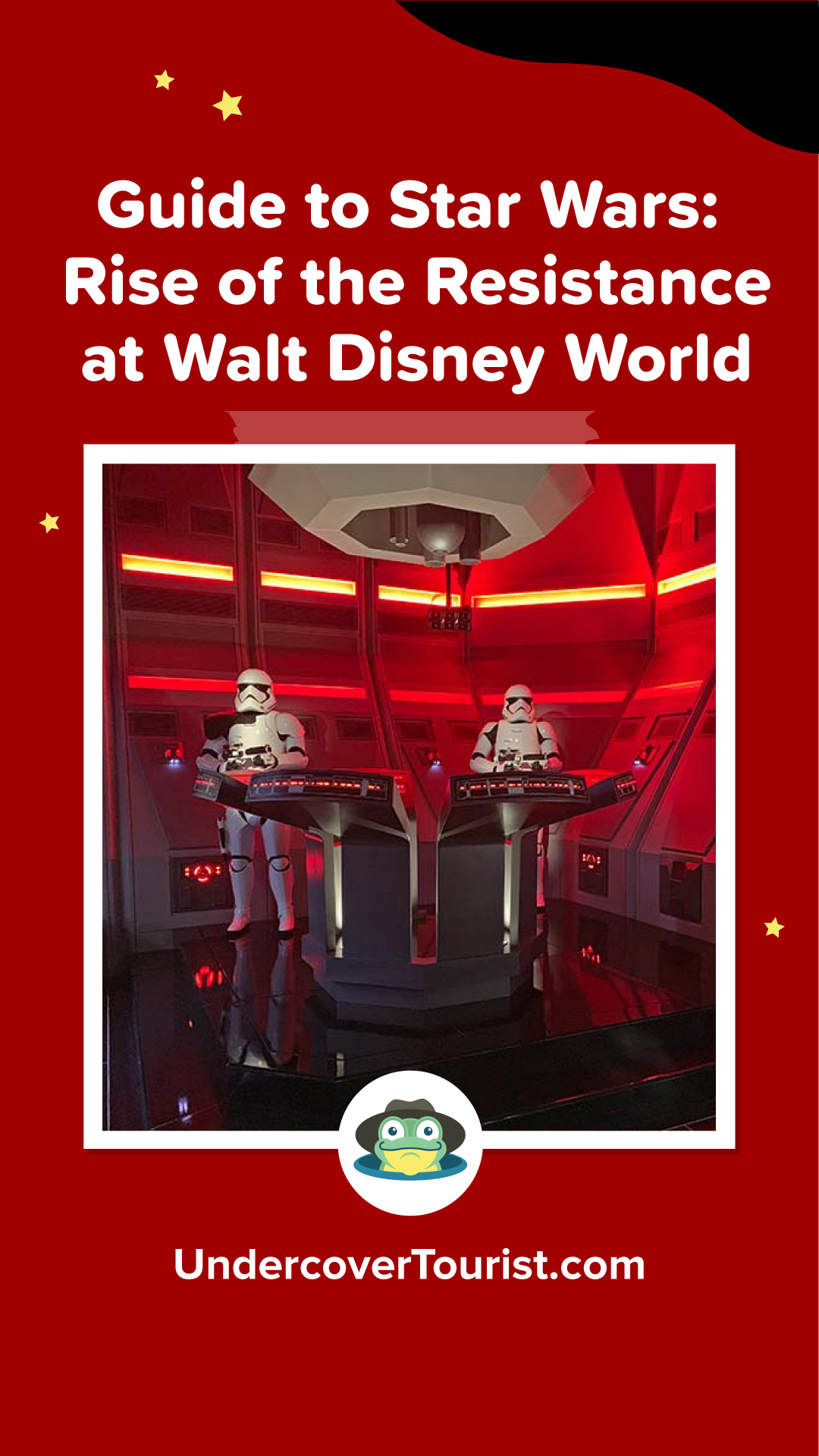 When Star Wars: Galaxy's Edge first opened, it was the first time frogs could live their own adventure in a galaxy far, far away. This heavily themed land makes you truly feel like you are on another planet! That immersion took on a whole other level with Star Wars: Rise of the Resistance. With a 20-minute experience and incredible technology, this ride is a game-changer. Not only is the attraction itself one of the most technologically advanced that Disney has ever created (utilizing FOUR different ride systems!), but also, the way guests initially accessed the ride was toadally new.

In this guide, we’ll cover everything you need to know about Rise of the Resistance, including how to access the ride via standby, Lightning Lane service and virtual queue. Grab your lightsaber!

A Complete Guide to Star Wars: Rise of the Resistance 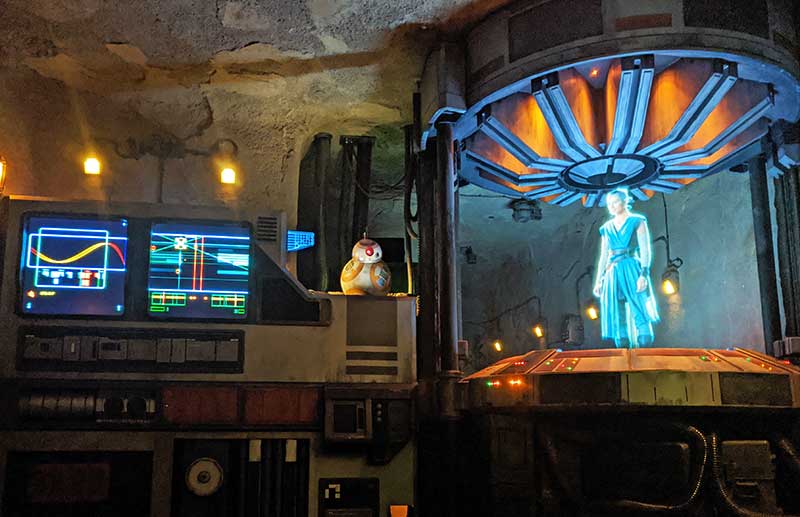 This immersive attraction is located in Star Wars: Galaxy's Edge at Disney's Hollywood Studios. You're placed in the heart of the action as the Resistance needs your help with a secret mission! Join fellow recruits on a thrilling mission against the First Order as you try to escape the Star Destroyer. You'll see some familiar faces from the films, including Rey and Kylo Ren. With interactive cast members and an incredible trackless system, this experience is truly out-of-this-world. If you're OK with spoilers before you ride, you can check out the full queue and pre-show in the video Tad shot below! It's one of the most popular rides at Disney World, and for good reason. Every time we ride, we notice something new!

Using the Standby Queue to Access Star Wars: Rise of the Resistance

As we mentioned earlier, in September 2021, the use of the virtual queue system was paused for Star Wars: Rise of the Resistance. Many of us had mastered using our datapads to get a group by that time, but for many others, this presented the first opportunity to ride using the standby line. Here's what to know about the standby line: when Boarding Groups are in operation, the standby queue does not exist. Bookmark this post and hop back before your next visit — we'll keep this post updated so that you know the best way to access this ride ahead of time! Another way to see whether or not Rise is operating with a Boarding Group is via the My Disney Experience app; if you see a standby wait time, a standby queue is in operation. If you see the Rise of the Resistance module with deets about the Boarding Group process, a Boarding Group is in use. (Disney initially gave the caveat that the virtual queue may return during peak or busy times, so it's possible!)

When Star Wars: Rise of the Resistance is operating normally with a standby queue, you can hop into the line like you would any other attraction. With the popularity of this ride, expect long waits, as many guests will have the first chance to experience this ride now that standby is available. We've seen this wait time fluctuate from 60 to 155 minutes on any given day (and know that during busy times, this range will probably go even higher). If Rise is a must-do for you, and standby is the best option for your fam, hop in line toward the end of the evening as the wait tapers.

If you're anything like me, the first thing you're probably thinking is, "What do I do about the restroom in a two-hour line?" Well, as the mom of two tadpoles, I got to experience this myself! If you need a bathroom break, notify the next cast member in the queue. The cast member will then escort you to the restroom (this one was behind a top-secret door just for that reason, so you won't need to walk through the land to another restroom). They'll then walk you back to the line to jump back in.

Purchasing an Individual Lightning Lane Selection for Star Wars: Rise of the Resistance

Star Wars: Rise of the Resistance is now available as an individual Lightning Lane selection. Using the My Disney Experience app, guests can select two premium attractions each day to purchase skip-the-line access. Disney World Resort hotel guests can access these choices at 7 a.m. each day, while off-site guests can access them at park opening. These add-ons can range from $7 to $15 per person, per day — and pricing varies from day to day. You may see a higher price for these attractions during peak times, for example. And the more in-demand the ride, the higher the price is likely to be (for example, Expedition Everest may be $8 while Rise of the Resistance is $15).

If you're a Disney World Resort hotel guest and riding Rise is a must-do for you, Lightning Lane may be a good option for you. When it comes to thinking about Genie+ and individual Lightning Lane selections, the question becomes how much do you value your time? Is it worth it to you to pay rather than wait for a few hours in line? If so, it's essential to hop on to My Disney Experience at 7 a.m. — these spots go quickly and do sell out!

For off-site guests, to date, there have been some days where individual Lightning Lane selections for Rise of the Resistance are sold out before park opening, which means standby would be the only way to access. Regardless of where you are staying, it's crucial to be prompt in selecting your individual Lightning Lane selection for Rise — don't wait! — since they sell out.

For more information, hop over to our full post on Genie+.

Experiencing Star Wars: Rise of the Resistance with a Virtual Queue

Before You Arrive at Disney’s Hollywood Studios

To start, you’ll need the latest version of the My Disney Experience app to join the virtual queue. You'll want to download it the night before, so you're ready to go at 7 a.m. (Pssst — check out our full guide to using My Disney Experience for even more tips and tricks!) It’s also very important to add your entire party to your Family and Friends list. While there are no limits to the number of people who can join a Boarding Group, only guests with valid admission and a Disney Park Pass reservation for Hollywood Studios are able to access the virtual queue system at 7 a.m. on the day of their reservation. Thanks to recent app changes, you can confirm your party before 7 a.m. as opposed to being part of the Boarding Group sign-up process. If you don't get a Boarding Group at 7 a.m., you'll still have a second chance at 1 p.m.

Like we mentioned above, if you want to book Rise of the Resistance as your individual Lightning Lane selection for the day, you can access it at 7 a.m. (for Disney World Resort hotel guests) or park opening (all other guests) using the My Disney Experience app. When you reserve, you'll be able to choose a return time from the available windows. In order to reserve, you'll either need a park hopper ticket or a park pass reservation for Hollywood Studios on the same day.

What Is a Boarding Group and How to Join to Ride Star Wars: Rise of the Resistance 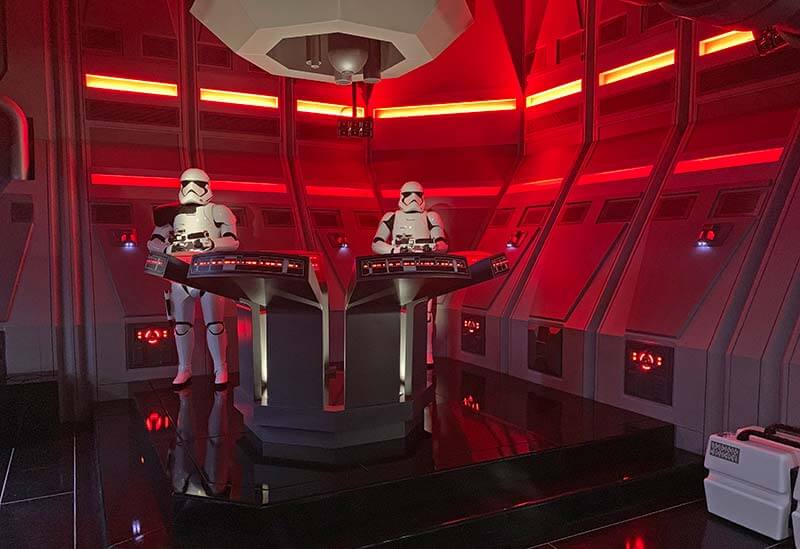 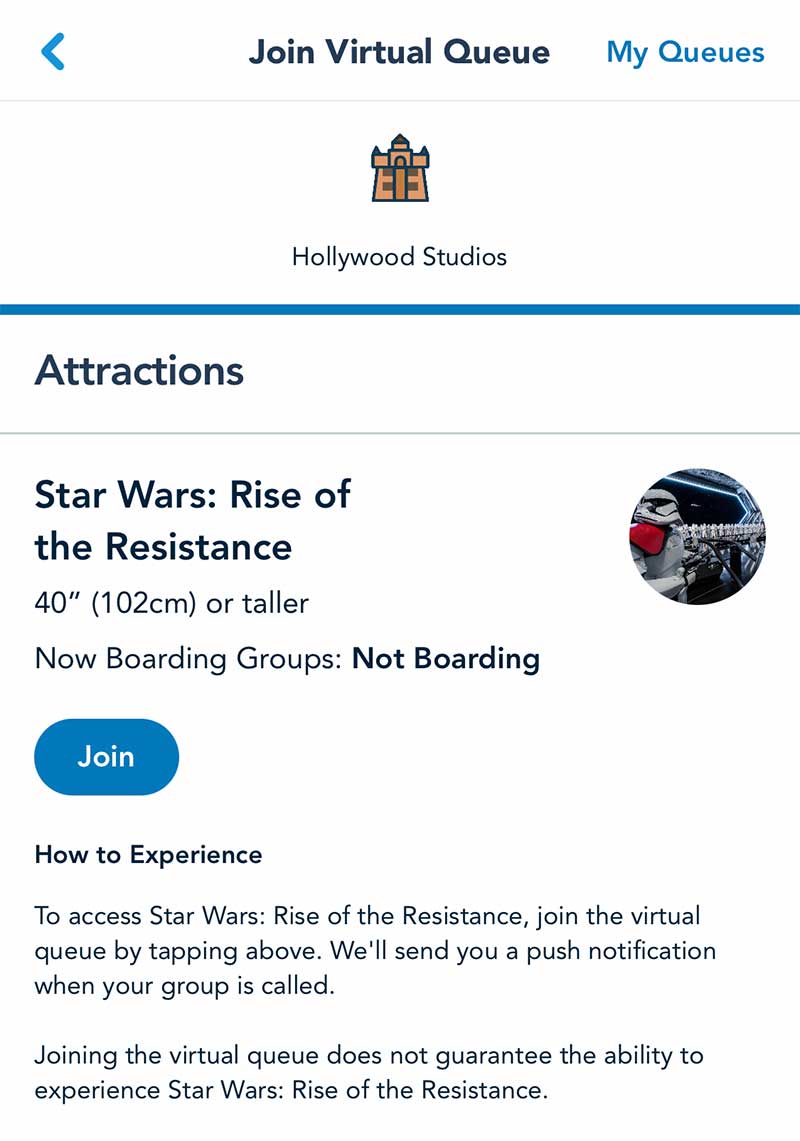 In order to join the virtual queue, you'll need to access the My Disney Experience app at either 7 a.m. (any location) or 1 p.m. (inside the park). On the homepage of the app, there will be a section named "Star Wars: Rise of the Resistance - Request Access with Virtual Queue." Click on the Join button. This is where you and your selected friends and family members can join a Boarding Group. Note that guests must be inside Hollywood Studios at 1 p.m. to access this second opportunity, which is subject to availability and not guaranteed. Park hoppers will not be able to join the virtual queue, as park hopping hours begin at 2 p.m.

You'll want to confirm quickly and use your speedy fingers to click through the screens. Boarding Groups can fill up within the first few seconds, so you should be ready on your phone before the clock strikes the hour. Our best tip is to open the app right around 6:58 a.m. (or 12:58 p.m.). About a minute before the hour, pull down on the screen to refresh and a blue Join button should appear. 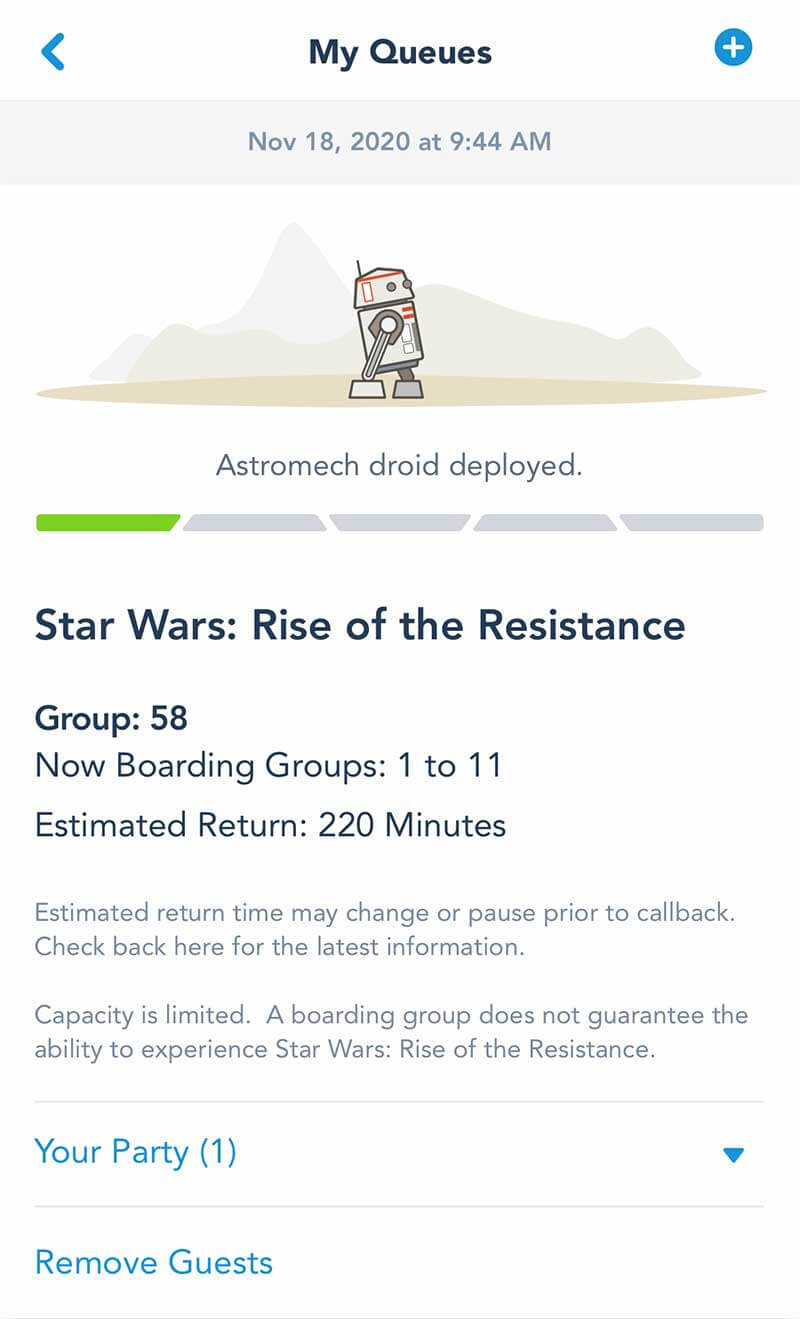 Congratulations! Now that you’ve successfully joined a Boarding Group, you can get ready for the rest of your day. If you still want to head to the park early, we'd suggest taking advantage of any rides with low wait times or making a beeline toward your next priority ride (Slinky Dog, anyone?).

Once you're in the park, you can keep track of your Boarding Group's status through the My Disney Experience app. Be sure to turn your push notifications on so that you’ll receive a notification when your Boarding Group is called! There are also digital boards that display exactly which groups are boarding throughout the park. Once it’s your Boarding Group’s turn, you'll be assigned a one-hour window to return to the attraction’s entrance and check-in with the cast members to enter the queue. Cast members will have to scan your MagicBand or park ticket card, so have those ready to go!

If your Boarding Group is a higher number and isn’t expected to be called until later in the day, you may leave the park and return to your hotel to swim in those luxurious heated pools or take a nap. But keep in mind that you'll only have an hour to return once your Boarding Group is called! We suggest staying inside the park so you don't run the risk of missing your arrival window.

If the ride happens to shut down in order to work out some kinks, there is a chance you could experience a delay. Boarding Groups will stop being called, and entry into the queue will be closed if you're not already in line. Once the ride is up and running again, the order of Boarding Groups will pick up where it was left off. Your return window will be extended if a delay causes you to miss your expiration time, but still keep a close eye on which Boarding Groups are allowed entry.

With the possibility of ride delays, joining a Boarding Group does not guarantee that you'll be able to ride Star Wars: Rise of the Resistance.

Other Tips for Accessing Star Wars: Rise of the Resistance 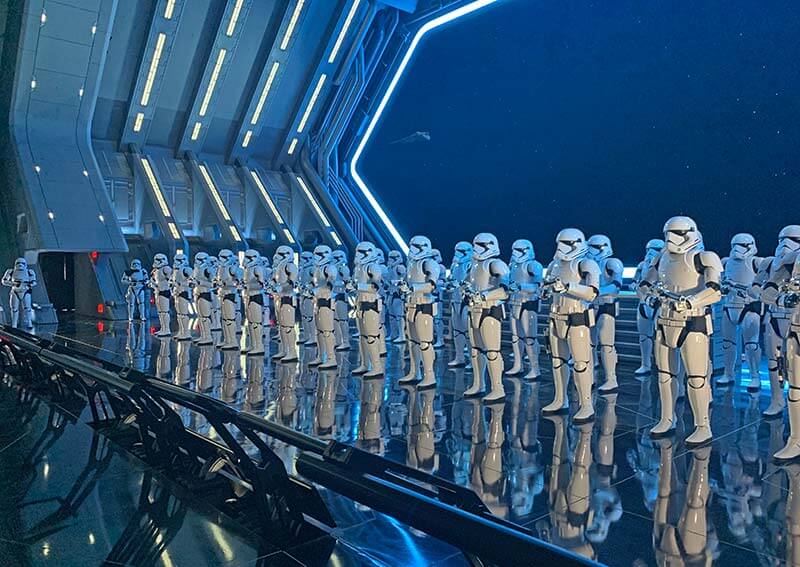 Are you ready to ride Star Wars: Rise of the Resistance at Disney World? Do you have any other questions about accessing the ride? Share in the comments below.

Leave a Comment
Sort:  Newest to Oldest Oldest to Newest
1–50 of 116 comments