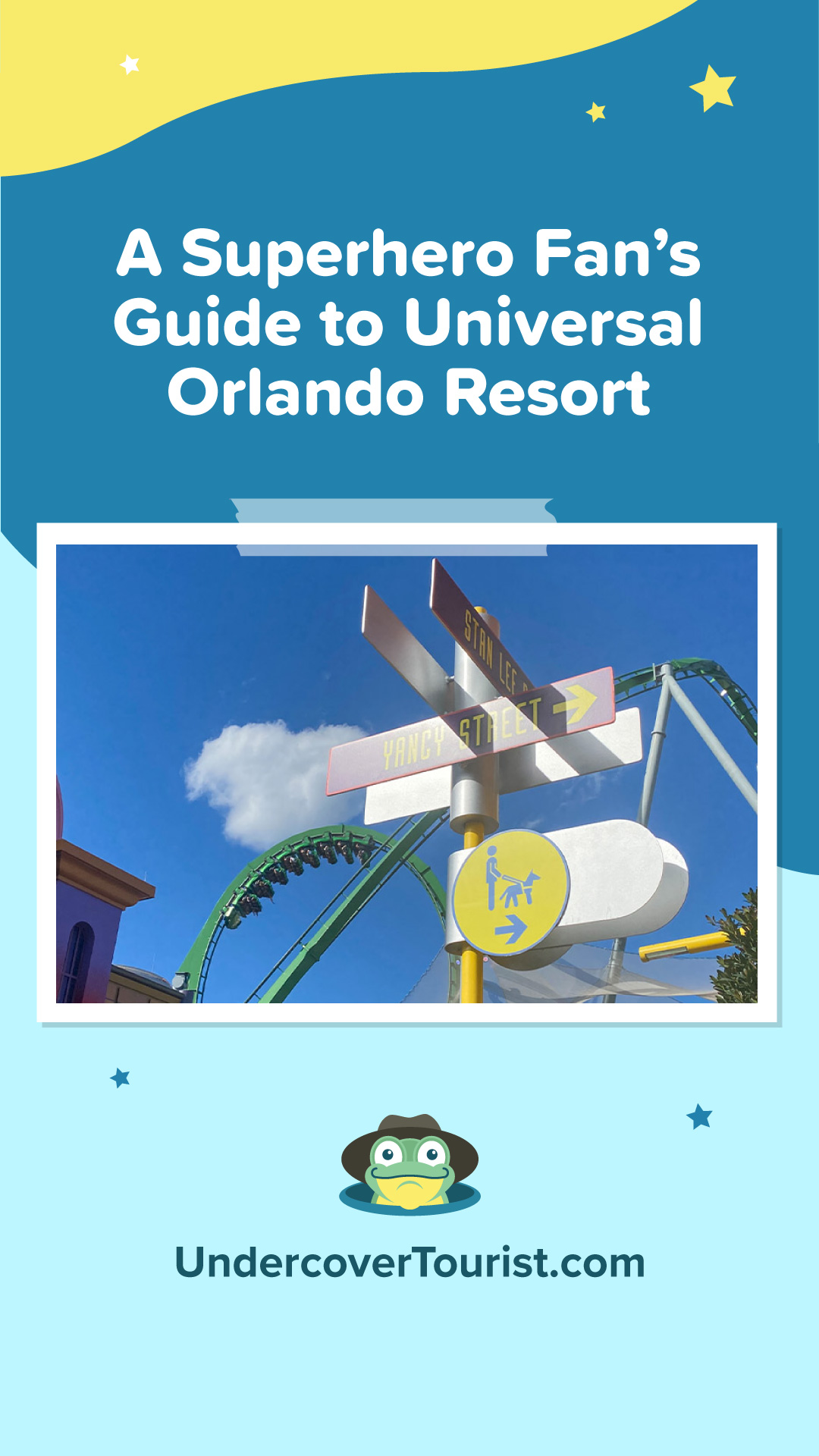 'Sup! Tad here. Having been a comic book fan since I was Lily's age, I've always dreamed of swinging above the streets with Spider-Man and fighting alongside the Fantastic Four. That's one of the many reasons I love going to Universal Orlando Resort. At Marvel Super Hero Island in Universal's Islands of Adventure, I get to help take down bad guys alongside Earth's mightiest heroes! With rip-roaring rides, frogtastic food, marvelous merchandise and epic Easter eggs, there's so much to see and do in this land, even Quicksilver himself wouldn't be able to hit everything in one day! (OK, maybe he could. The dude can outrun Thor's lightning!) Lucky for you, I'm here to break down all the awesome things this island has to offer. Well, what are you waiting for?!? Grab your gear, suit up and hit the streets 'cause evil is afoot! Avengers ... assemble! (I have always wanted to say that!)

Based on the superhero characters featured in Marvel Comics, Marvel Super Hero Island opened alongside Islands of Adventure on May 28, 1999, with three rides: The Incredible Hulk Coaster, Doctor Doom's Fearfall and The Amazing Adventures of Spider-Man. Exactly one year later on May 28, 2000, the fourth and final ride, Storm Force Accelatron, opened, adding another family-friendly ride to the park. With a bright color scheme, exaggerated angles and larger-than-life cutouts of popular Marvel heroes and villains, you'll feel like you stepped right inside the pages of a comic book. Some of the buildings are even painted with a special paint that contains three-sided crystals — creating a holographic effect that changes colors depending on the position of the light and the angle it's viewed from.

Marvel Super Hero Island is the first island to your left when you enter Islands of Adventure. (Trust me — you will not be able to miss the big, green roller coaster and its iconic "Roar!") As soon as you hear that rockin' electric guitar blasting over the speakers, you'll know you're in the right place. Now, hurry up! The Marvel Super Heroes are counting on you! 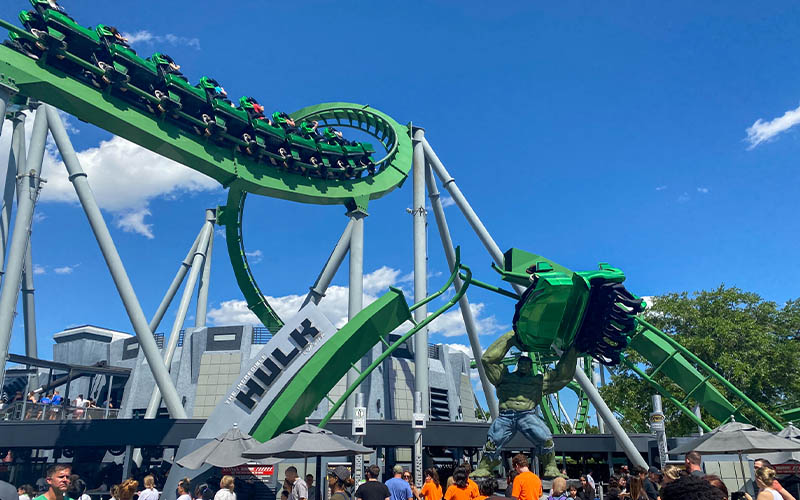 It's the first thing you'll see if you're arriving from the Port of Entry, so let's start with it! Fresh off a massive refurbishment in 2015 that involved a redesigned entrance and queue, a brand-new storyline, improved smoothness, new track and trains, and added onboarding audio and lighting effects, this coaster is a not-to-be-missed attraction for thrill lovers. Upon entering this ride, you agree to be subject to perilous scientific experiments conducted by General Thaddeus E. "Thunderbolt" Ross. Once you board the train, you'll be blasted with a high dosage of gamma radiation and launched from the gamma-ray accelerator from zero to 40 mph in just two seconds. Talk about a rush!

This ride — which reaches speeds up to 67 mph — features seven inversions including a zero-G roll, a cobra roll, two vertical loops, two corkscrews and an incredible (pun intended) original score by Fall Out Boy lead singer, Patrick Stump. Be prepared to be catapulted into the sky and feel the fury of The Hulk. 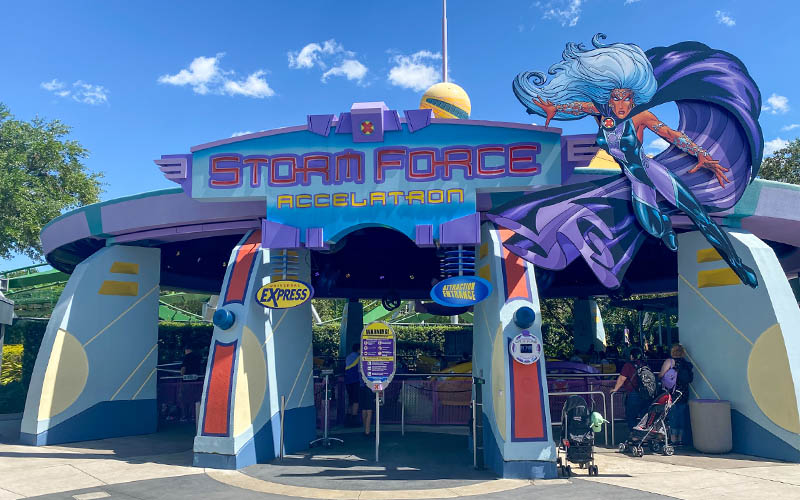 X-Men fans, this one is for you. Magneto has returned to threaten the world, and Professor Charles Xavier and Storm need your help! Climb aboard the Accelatron and turn the wheel as fast as possible to generate storm energy and send the villainous mutant packing. This ride features sound effects simulating lighting and thunder, as well as flashing lights that originate from the overhead power generator. This is the most tadpole-friendly attraction in the land but still quite the whirlwind — figuratively and literally! 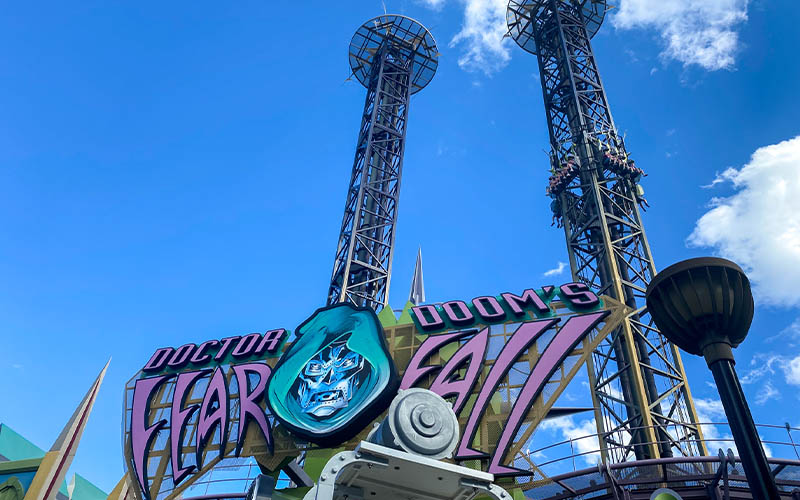 Yikes! In his plot to become the most powerful man on Earth, the malevolent Victor von Doom has captured you. Why? To fuel his nefarious Fusion Dynamo, a powerful super-weapon that will finally allow him to defeat the Fantastic Four! It's just missing one thing: your fear. That's right, Doctor Doom is about to launch you into the air 185 feet at upwards of 40 mph (where you get to experience some killer views of both Universal theme parks for three brief seconds) ... before dropping you down with a force greater than gravity ... and launching you back up ... and dropping you back down again in order to harness your fear and conquer the world! Don't let the good doctor down. Those dreadful Doombots will get you to scream at any cost.

The Amazing Adventures of Spider-Man 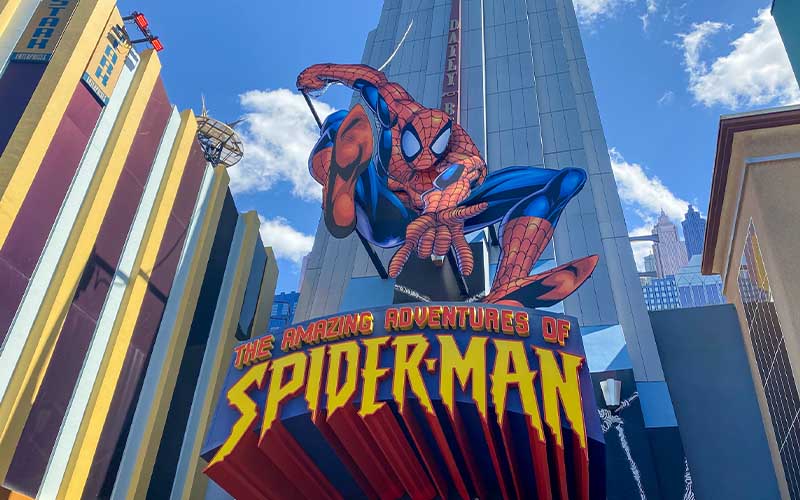 Your visit to the Daily Bugle takes a turn for the amazing when the Sinister Syndicate uses an anti-gravity canon to take the Statue of Liberty hostage in an attempt to rule New York City. Since every reporter on the payroll has fled to safety, Editor-in-Chief J. Jonah Jameson recruits you to cover the story! Hop aboard the state-of-the-art, high-tech, news-gathering vehicle, the Scoop, and hit the streets because Mr. Jameson's counting on you! So, don't screw this up! I mean ... uhh ... good luck.

Once you enter the back alleys of Manhattan, you'll come face-to-face with the friendly neighborhood superhero himself but it won't be long before Electro, Doctor Octopus, Hobgoblin, Hydro-Man and Scream have you in their grasp. As you make your way through the concrete jungle, you'll be right in the middle of the action as Spider-Man attempts to save the city — and you! Pumpkin bombs and fiery claws should be the least of your worries, because, with one blast, Doc Ock can send you soaring above the city ... and crashing back down with another. You might want to hang on!

While this was the first-ever ride built that combines moving, motion-based vehicles, 3-D film and live-action sets, the most special thing about this attraction are the numerous Stan Lee cameos. The founding father of Marvel Comics makes multiple appearances, both visually and audibly, so use your spider-sense, and keep an eye and ear out! 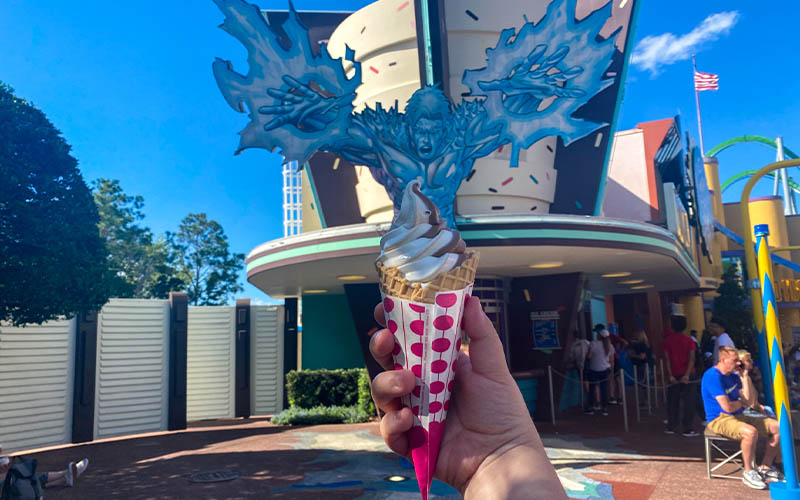 You can't save the world on an empty stomach, now can you? Enter the Baxter Annex — an ancillary structure to the Baxter Building (the prominent headquarters of the Fantastic Four) — and battle your hunger with a variety of pizzas, pasta dishes, sandwiches and salads at Cafe 4. Assemble the perfect meal at Captain America Diner — whether it be a burger or chicken — and wash it down with a super shake. Celebrate your victory with a delicious cup, cone or float at Chill Ice Cream. 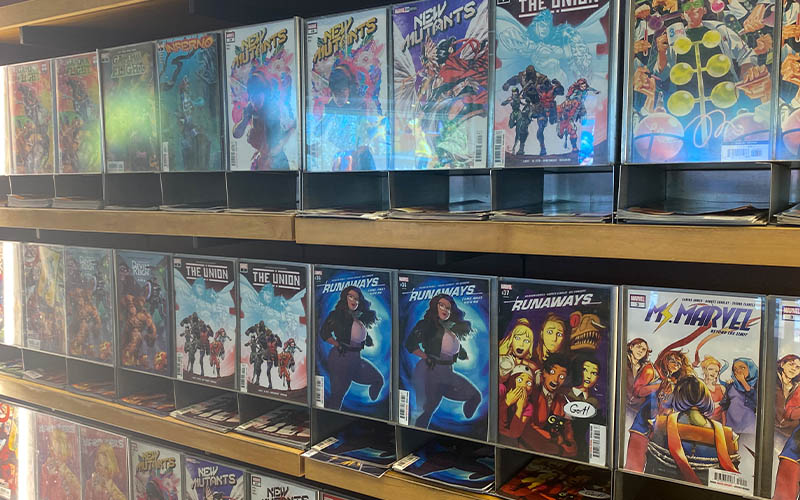 Want to stock up on some super gear? Head into the Spider-Man Shop (located at the exit of The Amazing Adventures of Spider-Man) for action figures, mugs, shirts and more devoted to your favorite wall-crawler. Enter the Marvel Alterniverse Store to score some sweatshirts, toys, collectibles and more, and even get your photo taken with Marvel's very own web-slinger! Of course, you can't froget about the Comic Book Shop where books, graphic novels, posters and apparel line the shelves. 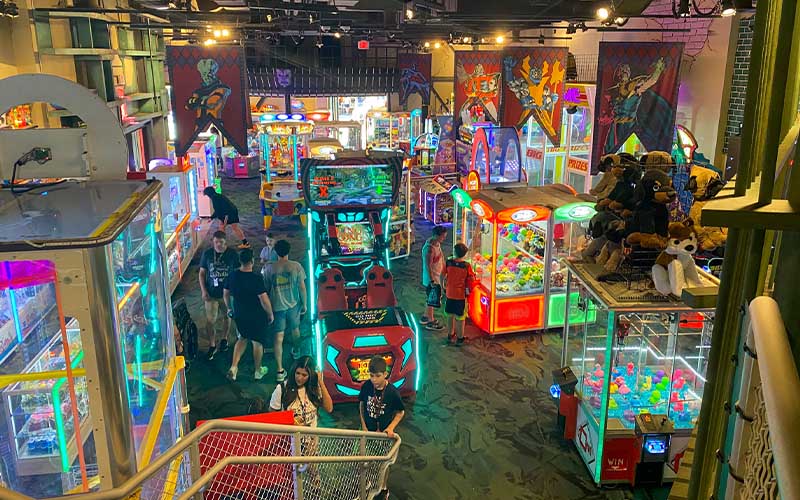 Ready to put your skills to the test? The Brainwasher himself is waiting for you. Kingpin's Arcade (located at the exit of Doctor Doom's Fearfall) is where you'll find challenging arcade and video games, from high-speed driving simulations to classic claw machines and everything in between. 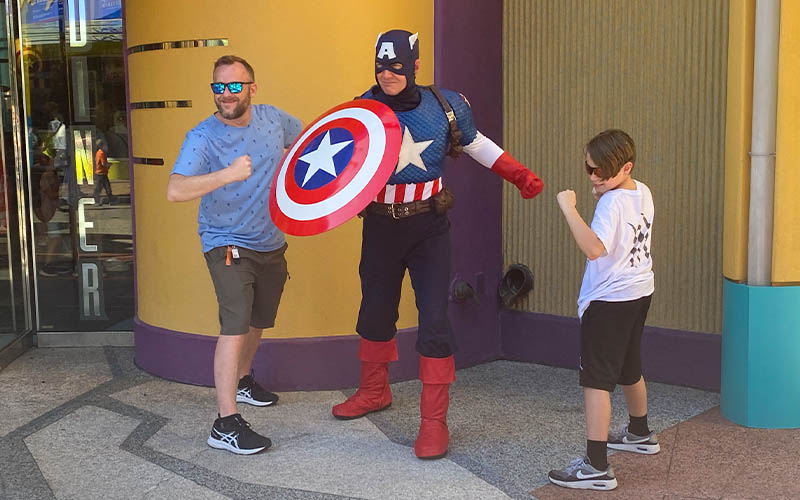 In addition to Spidey's very own photo-op in the Marvel Alterniverse Store, several other heroes and villains pop up all over Marvel Super Hero Island throughout the day. Strike a pose and smile because Captain America, Cyclops, Wolverine, Storm and Rogue are here to save the day! But where there are heroes ... there are also villains. Keep an eye out for Doctor Doom and the Green Goblin as they unleash their dastardly plans!

Character appearances are announced over the speakers so be sure to listen for the countdown to their arrival. On my last visit, I saw Rogue in front of Kingpin's Arcade, Wolverine in the Character Meet & Greet Photos location and Cap twice — once in front of the Comic Book Shop and again in front of Captain America Diner. Make sure you have your catchphrase ready!

Made it this far? Awesome! That means you get to read about all of the epic Easter eggs Universal Orlando has hidden around Marvel Super Hero Island.

Answering the Call of Duty 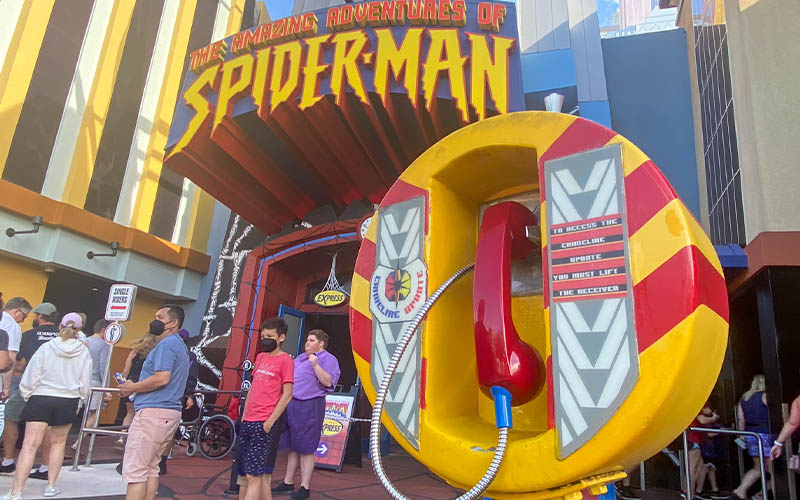 Did you know there are fun interactive elements scattered throughout Marvel Super Hero Island? Pick up the phone in front of The Amazing Adventures of Spider-Man to get a detailed mission report from S.H.I.E.L.D. or dial into the Doomnet via the giant yellow sphere in Doom Alley to listen in on some ongoing battles in real time. 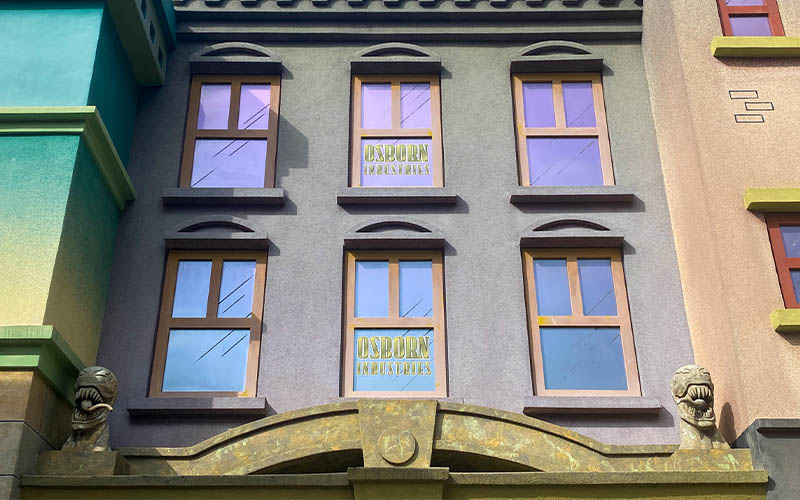 Keep your eyes peeled all around the island. Depending on how big of a comic fan you are, you'll probably spot some familiar names. Doom Alley is located on the corner of Yancy Street (as in the Yancy Street Gang that often antagonizes The Thing) and Stan Lee Blvd (as in ... well, Stan Lee). Daredevil fans will love seeing signs for Nelson & Murdock — Attorneys at Law (the law firm operated by The Man Without Fear and his partner, Foggy Nelson), Fogwell's Gym (where Matt's father trained as a boxer) and Gladiator's Costume Shop (a reference to the man who created Daredevil's suit). Spider-fans will get a kick out of the windows that read Osborn Industries ... and the heads of a certain Symbiote directly below them in Doom Alley. Turn around and you'll see a sign for Blaze & Ketch Mechanics, a reference to the men who have taken up the Ghost Rider moniker. Stroll down by the water and you might find the entrance to Stark Industries! But one of my favorite signs is the one for Donald Blake, M.D. Any guesses who that is? Ask the God of Thunder if he's heard of him ... 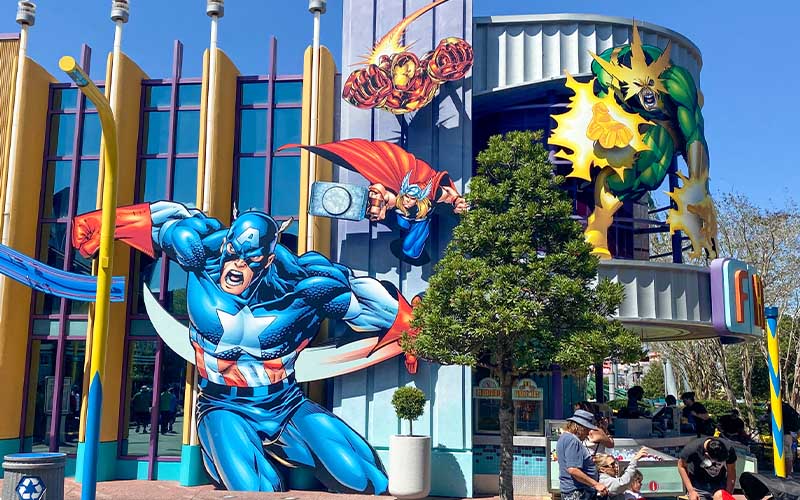 While other theme parks may challenge you to spot a group of three circles, be on the lookout while you're in Marvel Super Hero Island for a group of four letters. Marvel comic artist Adam Kubert — who created those gigantic 2D character drawings you'll see around the island — hid his name in some of the artwork. See how many you can spot! I'll give you a head start: look at Captain America's left arm just above his glove!

Universal Orlando hides a lot of fun details above your line of sight ... but there are also some cool Easter eggs to be found on the ground! Look down as you're heading into Doctor Doom's Fearfall. You might spot the outlines of some "Fantastic" heroes who look like they've fallen off and ... met their doom. Yikes! As for those big yellow spikes across from The Amazing Adventures of Spider-Man, that's ground zero for the infamous meteor that crashed to earth and created Marvel Super Hero Island. It's easy to miss the smoke cloud right below your feet! 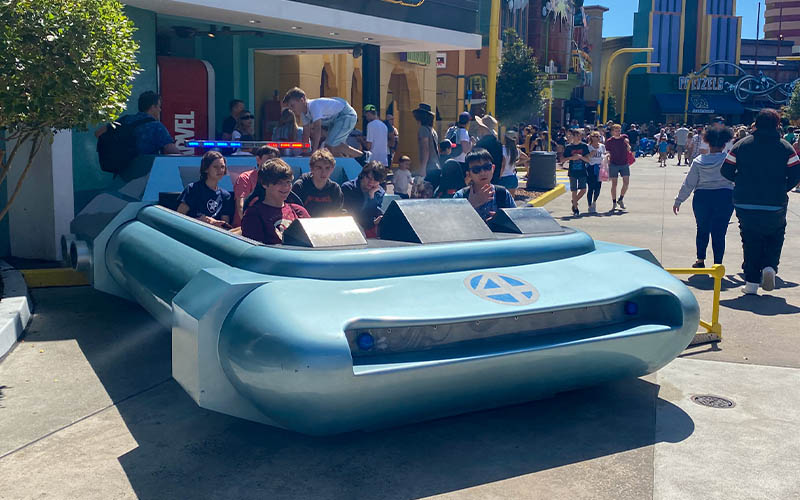 Outside of Kingpin's Arcade, you'll spot the Fantasticar! Be sure to hop in and get a photo. (It even lights up!) Additionally, if your nerves prevent you from conquering Doctor Doom's Fearfall, don't froget to head up to the second floor of the arcade where you'll find the villain's famous throne. (You pass it as you exit the ride!)

Feeling ready to fight some bad guys? What's your favorite thing to do at Marvel Super Hero Island? Let me know in the comments below! Over and out, my dudes!

Related: What Not-to-Miss at Universal's Islands of Adventure

SAVE $55 vs Adult gate price