First-Hand Tips on Seeing Frozen Live at the Hyperion

Frozen fever hit the Frog Pond hard. Lily leaped for anything featuring Anna, and someone was asked if they wanted to build a snowman at least four times a day. Frozen even hooked Leap, who occasionally tossed a "Big summer blowout" quote. Visits to Frozen Live at the Hyperion Theater are in our foreseeable future. We're not the only family that will make a beeline for this show on their visits to Disney California Adventure. As a mom, I realize that missing this show may cause a — meltdown — for those little ones set on seeing Elsa and Anna. I'm happy to help avoid that with some first-hand tips on seeing Frozen Live at the Hyperion Theater. 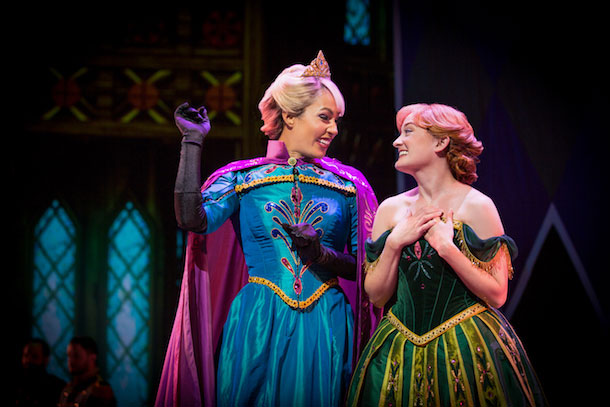 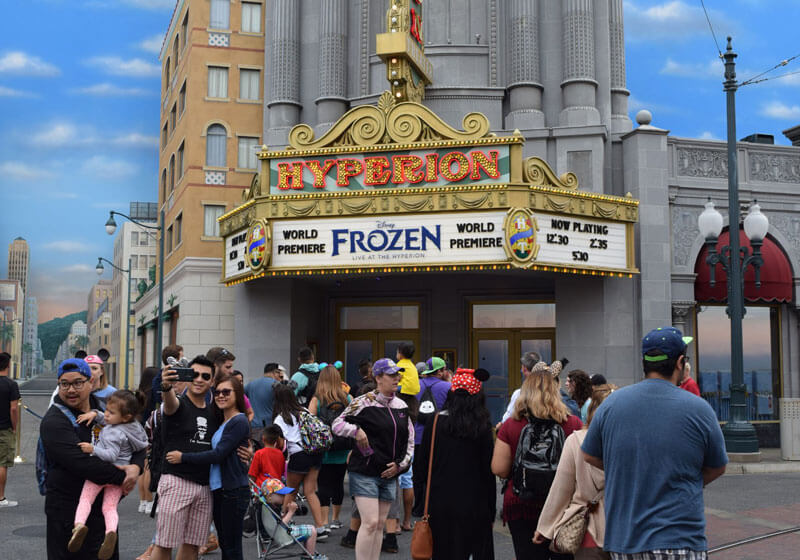 With FastPass for Frozen Live at the Hyperion discontinued, your strategy for seeing the show is simple — get in line early. Really early. 45 to 60 minutes early. The queue for Hyperion Theater usually opens up 90 minutes before showtime, but check with a Cast Member when you're in the park. When you arrive at the Hyperion Theater, you can choose to line up for Orchestra, Mezzanine or Balcony seats. We sat in the Balcony, which is the highest section (not for people afraid of heights), but we lucked out on front-row balcony seats, giving us a great view of the whole theater, and the imagery really extends out beyond the stage. 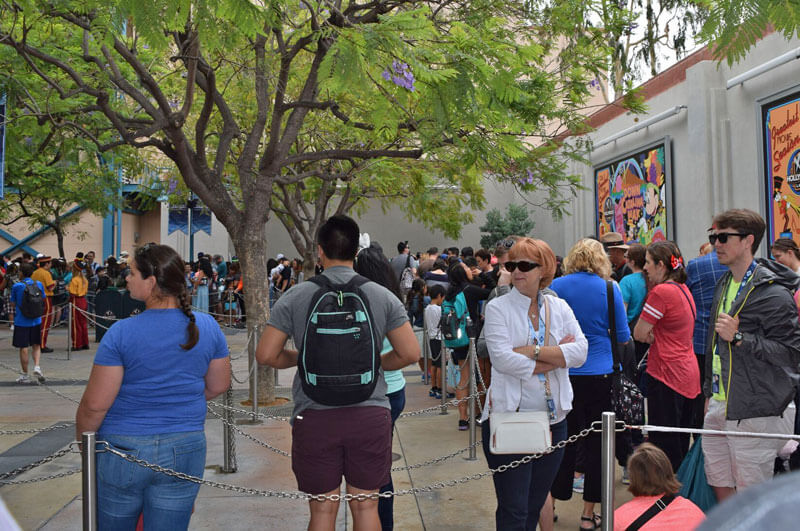 Go to the Bathroom Before Getting in Line

There is no restroom in the theater or line. I know. It’s a potty-training nightmare for those with toddlers and preschoolers. So use the potty first, and if you have to get out of line to use the restroom, be sure to get a return pass from a Cast Member or you will not be let in. Maybe lay off the beverages while in line and rehydrate after the show.

Keep Your Party Together 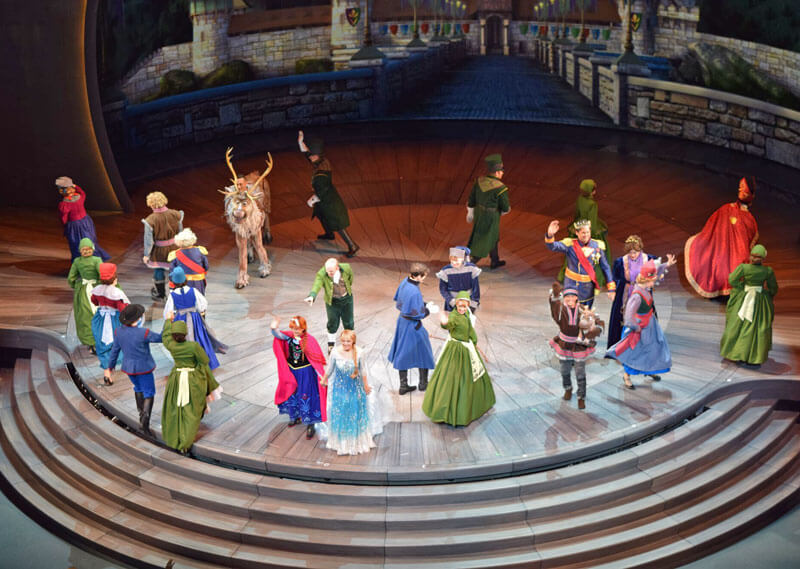 Sometimes we recommend one family member hold a place in line for parades and other shows, but this is not one of those times. You need to keep your party together. If employees close off a line, latecomers will not be able to join their party. The people counted in lines is pretty exact to the number of seats. If you need to leave the line for any reason, be sure to get a pass, which will say how many people left, and exactly that same number of people will be readmitted. There is no chance of sneaking in another person. They do sell some theater snacks and drinks in the line for convenience.

When you do get let into the Hyperion Theater (about 30 minutes before the show), fill in all available seats so that people behind you can get seats without climbing over you. They fill the rows from the middle out to the aisles without leaving any empty seats. Think of those poor little frogs in their Anna and Elsa dresses in the stand-by line just hoping for empty seats. And when you leave the theater, please take any trash with you.

You may take pictures or video of the Frozen Live at the Hyperion, but no flash photography. Tad recorded the show for our YouTube Channel. Be polite to your fellow guests and do not block their view by lifting your phone or camera up above your head to take pictures. Nobody wants to watch the show through your iPad.

Be Aware of Motion Sickness 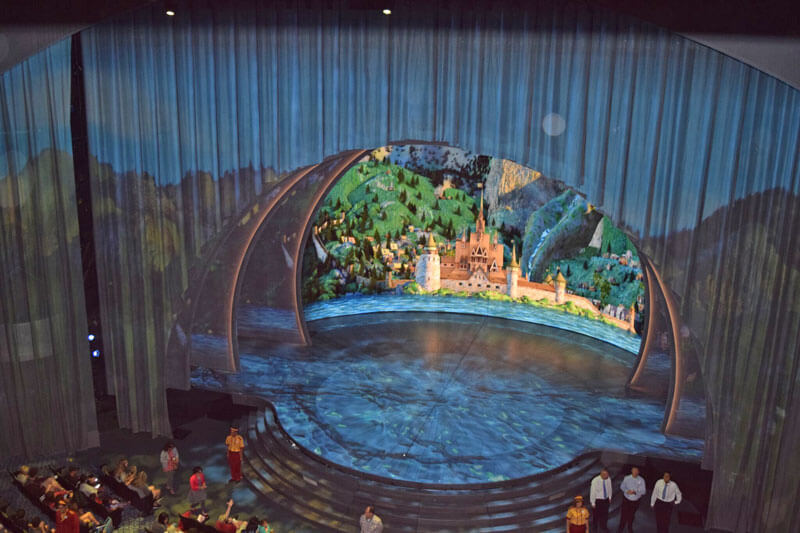 No, the Hyperion Theater itself does not move, but the technology and imagery are so well done that for a few seconds here and there you might actually feel as if you are moving. That kind of scene can make me a little greener than usual, so I just closed my eyes for a second and it passed. I am sure you will be fine, but I felt it was worth noting. It can be a little disorienting. You people who might be affected know what I am talking about. The rest of you can just shrug and call me crazy. 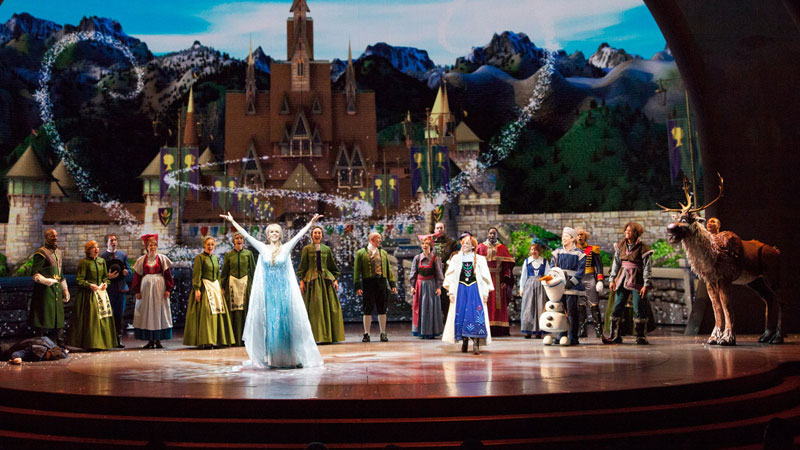 As for the one-hour show itself, we don’t want to spoil any details for you. But Lily says that Olaf steals the show. Sven got a pretty good round of applause too! You might even encounter some weather. It is pretty amazing. The costumes are great and the scenery spectacular. You probably know the story and songs by heart, but you have never seen it played out like this. 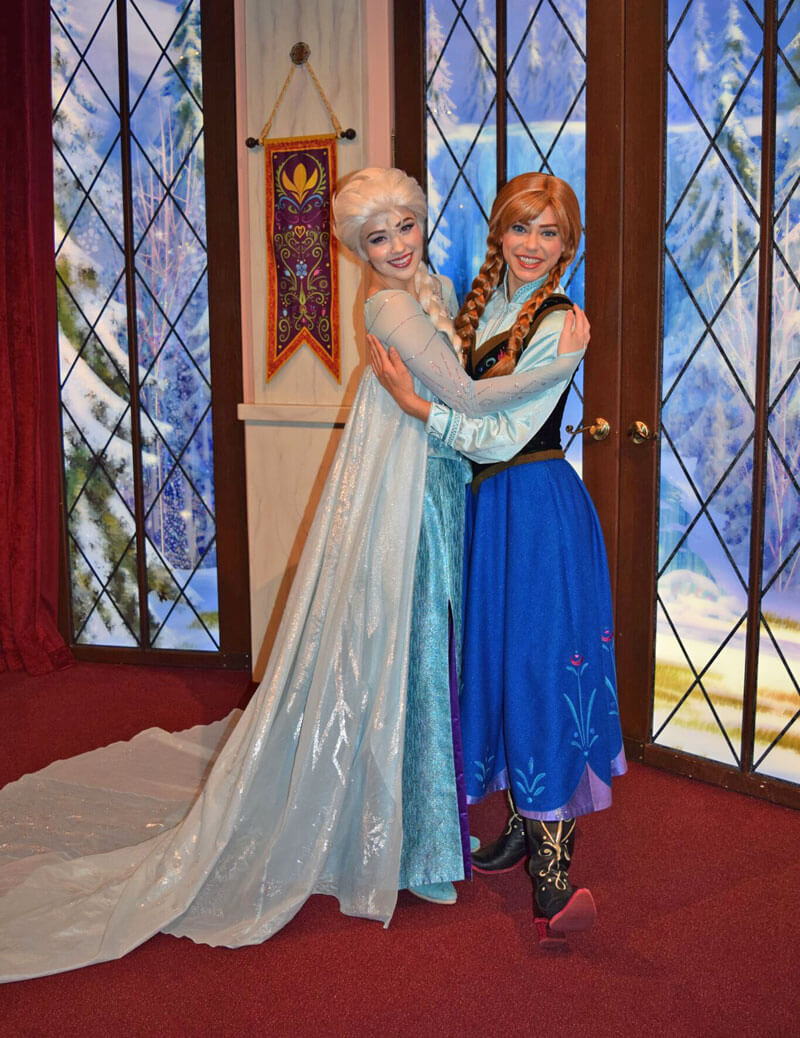 You can get your Frozen souvenirs in front of the theater. If your little ones are crazy Frozen fans, be sure meet Anna and Elsa just around the corner from the theater in Disney Animation. They greet guests from park opening until closing. Olaf has moved back to his old spot neat Stage 17, and he takes visitors until 5 p.m. He loves warm hugs! Be sure to say, “Freeze!” when they take your picture. It is always fun to meet characters! Be sure to take note of other new experiences and character meet and greets at California Adventure and Disneyland this season.

We don't want you to get — frozen — out of seeing Frozen Live at the Hyperion. Take it from some frogs that travel frequently — even during the best-planned vacations, you are always going to have some kind of hiccup. When that happens you just have to be resourceful and positive, and hopefully things will turn out. I think back to that first time with Lily. If we absolutely could not have seen Frozen, we would have had to “Let it Go.” We would have spent some time meeting Anna and Elsa and Olaf and maybe gotten a frozen souvenir and some frozen treats. Or maybe we would have gotten in the park early the next day to try again. But we would have made it work, and we would have had a great time doing something else fun in the parks.