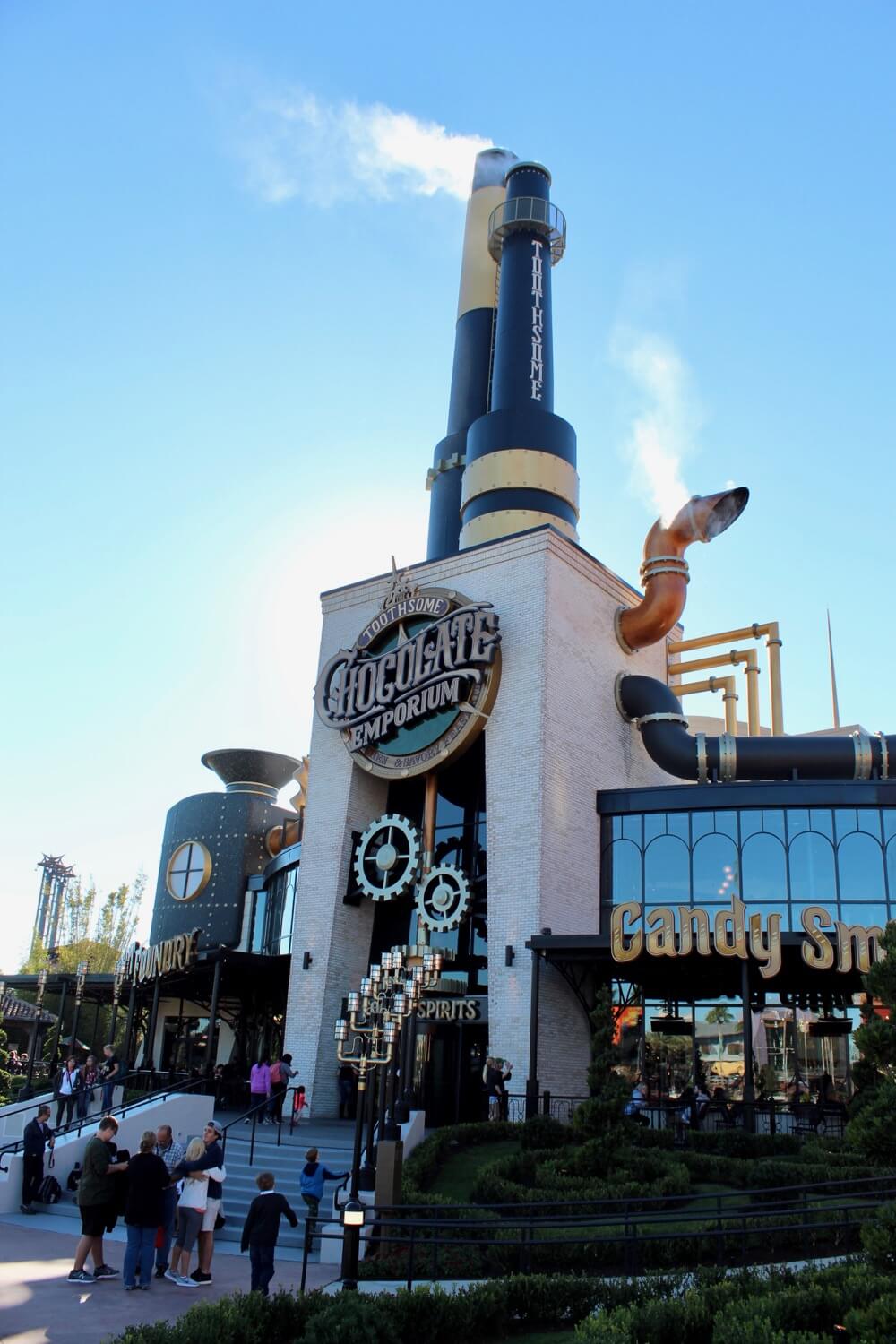 What’s found inside the Victorian-era styled factory is an emporium dedicated to one sweet temptation—chocolate. Leap and I have just returned from a visit to this whimsical restaurant to report that there are many savory flavors to be found and enjoyed here beyond chocolate. And oh those milkshakes!

To appreciate the detail and theme of this restaurant, you need to understand its story.  Toothsome is the domain of Professor Doctor Penelope Tibeaux-Tinker Toothsome. A world traveler and inventor, she built the emporium to share her love and knowledge of chocolate with others. Penelope and her robot, Jacques, can be seen around the establishment, but more about them in a bit. 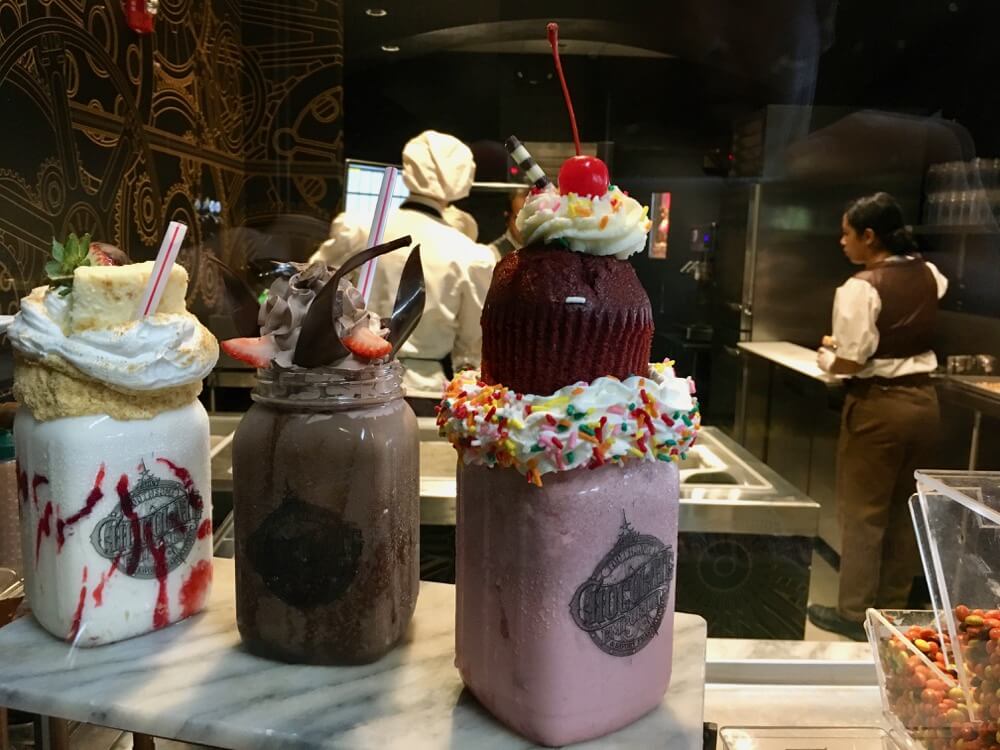 Upon entering the restaurant, you find yourself in a Steampunk-inspired factory. Pipes, gears, and cocoa beans rotating inside a clear tube are the signature decorations. After putting our name in, we took some time to explore the first floor. To the right of the host desk is the store. Chocolate could be found in many forms—chocolate bars, chocolate-covered pretzels, candy-coated milkshake straws and a display of flavor-filled chocolates. Further back in the store, we discovered other candies—cotton candy, candy powder and jelly beans. Toothsome shirts, mugs and assorted Steampunk-inspired merchandise could also be found. Opposite the store was a quick-service counter, where guests could order sundaes or Toothsome’s signature milkshakes. 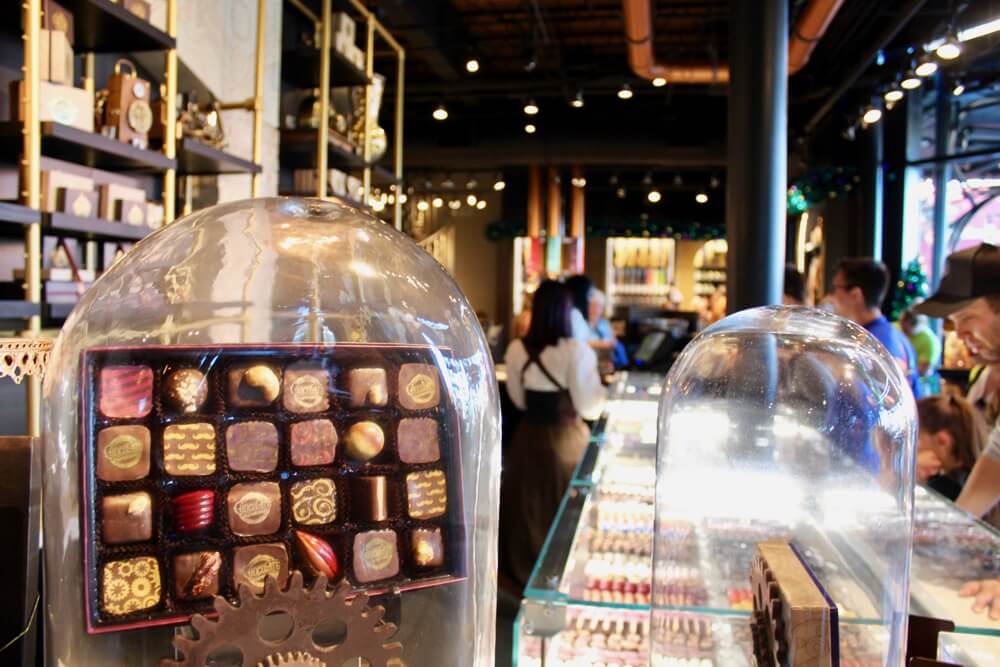 We were seated in the first floor’s main dining room, a Steampunk/Victorian-era parlor, with  brass and wood weaved into the design. Curtain-draped booths lined the back wall, and couches were the key seating element to tables along the other wall. Our booth gave us a clear view of the factory floor—three large screens that showed robots, blimps and other machinery mixing and creating Toothsome chocolate bars. Hopping up to the second floor was where we discovered the restaurant’s main bar, featuring lighted glass and a large marble bar top. There were touches of the Toothsome backstory found up here as well. Opposite the bar were photos and portraits of Toothsome family members. Penelope’s study, filled with trinkets of her travels was here as well. A spiral staircase led from her study to the retail shop—convenient for snack trips! 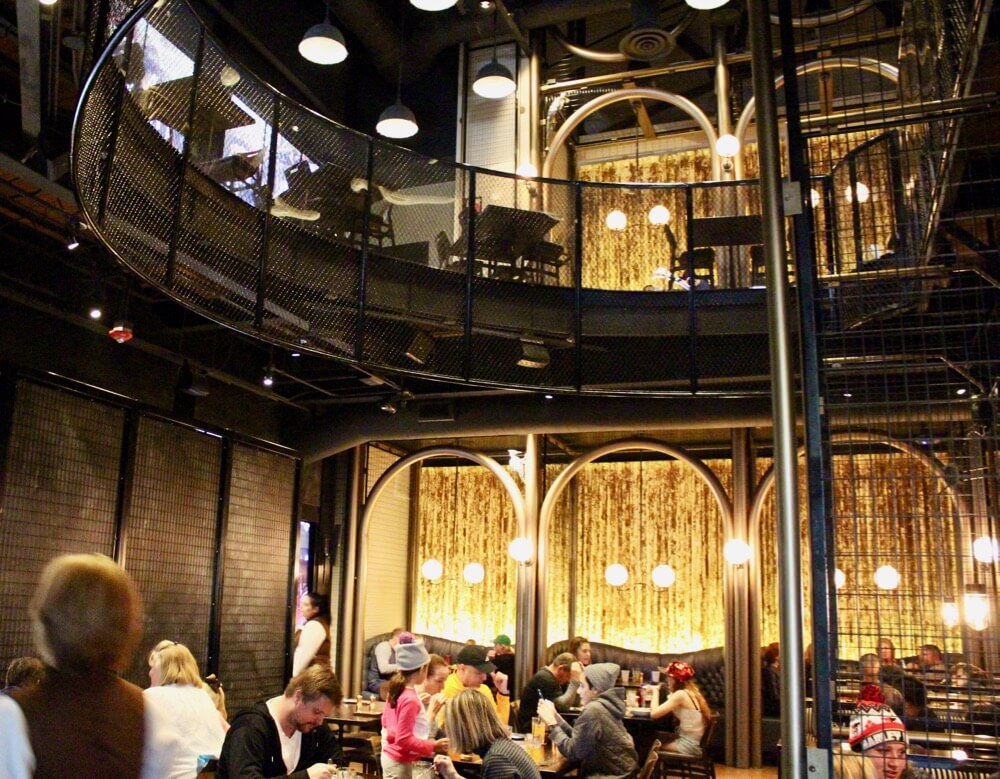 The menus are presented inside a large hardcover book. The first page is dedicated to Penelope’s story. Starting off is the restaurant’s extensive cocktail and alcohol selection. The chocolate temptation starts early, with libations such as an Old Chocolate Fashion or Chocolate Cherry Mule. Leap settled on the restaurant’s Too Chocolate Stout, a satisfying dark beer with the right touch of chocolate. 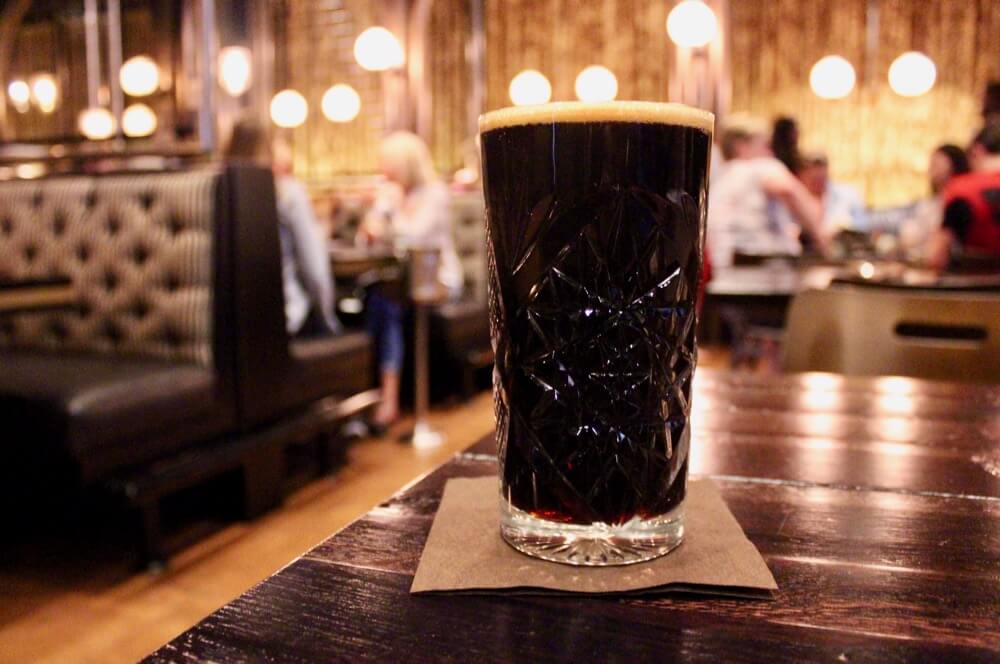 The appetizer listings were as unique as the drinks. Options were Philly Cheesesteak Rolls, Totchos (Fried tater tots with spicy green chili), and Coffee and Chocolate Stout Chicken Wings. This being a chocolate-inspired restaurant, we went with the Warm Chocolate Almond Bread wth salted caramel butter. Warm from the oven, the bread was flavorful without being heavy. As good as the bread was, the accompanying butter was outstanding. The warm and smooth salt and caramel combination gave the bread a satisfying extra layer of sweetness. 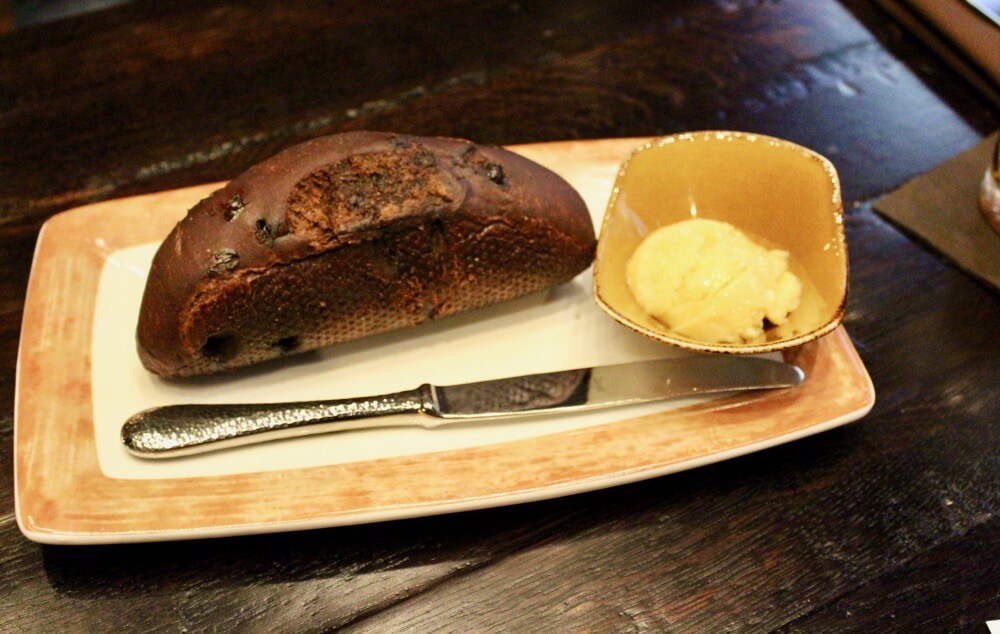 For entrees, I ordered the Pub It Up, a half pound burger with Colby andouille queso, cheddar cheese and grain mustard on a pretzel bun. Leap had the Southern Fried Chicken BTL—a boneless chicken breast, tomatoes, butter, bibb lettuce, bacon, Dijon mustard and toasted brioche. Both of our sandwiches were served with fries. Our selections were tasty and cooked to perfection, with the bread being just as delightful as the Chocolate Almond Bread. 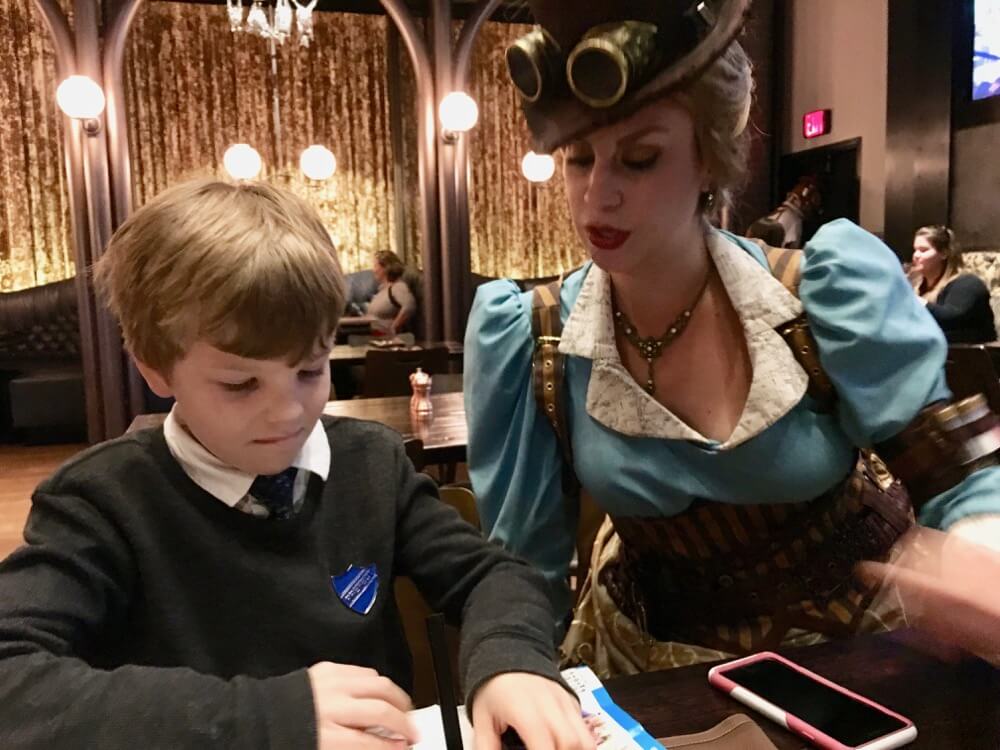 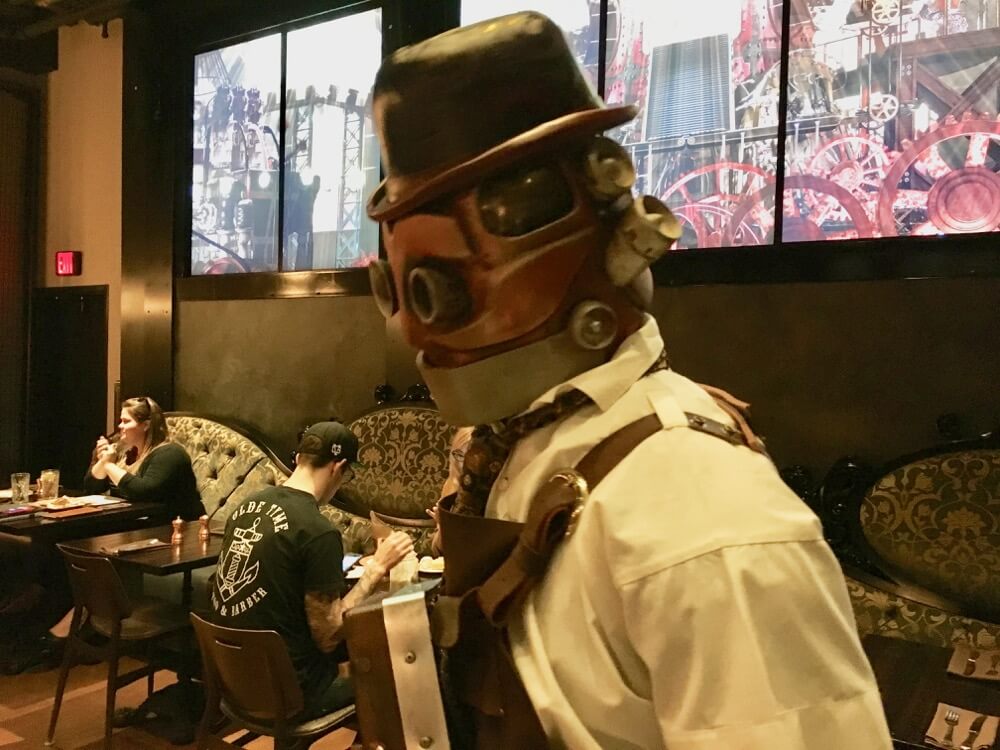 With our entrees finished, it was time for the main course—dessert. The restaurant’s signature desserts are Jacque’s Specialty Milkshakes. There are thirteen different varieties—Bacon Brittle, Key Lime Pie and Cinnamon Fantasy to name a few. There were also tempting cake, pie and sundae selections available. 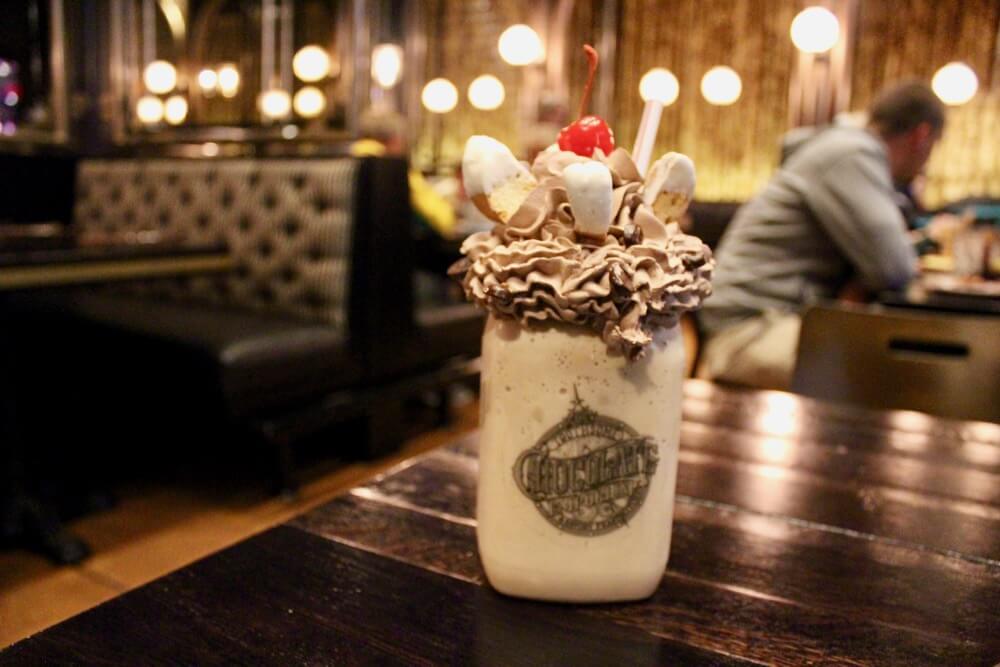 The Toothsome Chocolate Emporium and Savory Feast Kitchen is a sweet and tasty new addition to the Universal Orlando Resort. With its unique story and theming, this restaurant is a delicious tour full of chocolate-favored dishes and inspired desserts. 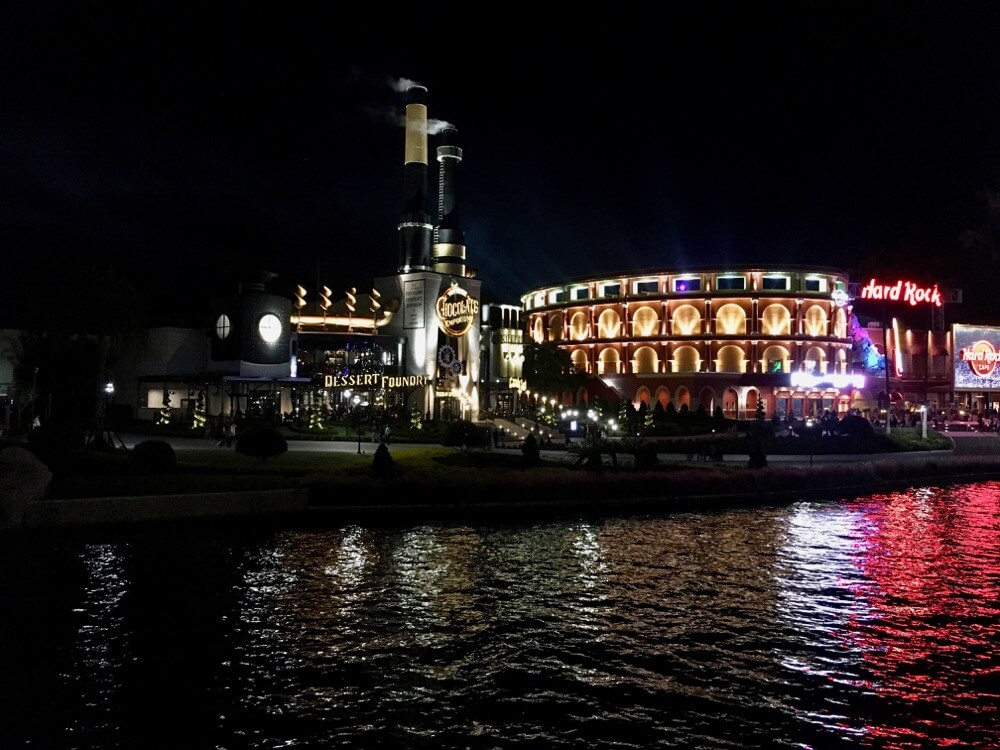 Have you visited the Toothsome Chocolate Emporium? What did you love? Do you have any questions about dining at Universal CityWalk? Share in comments below!