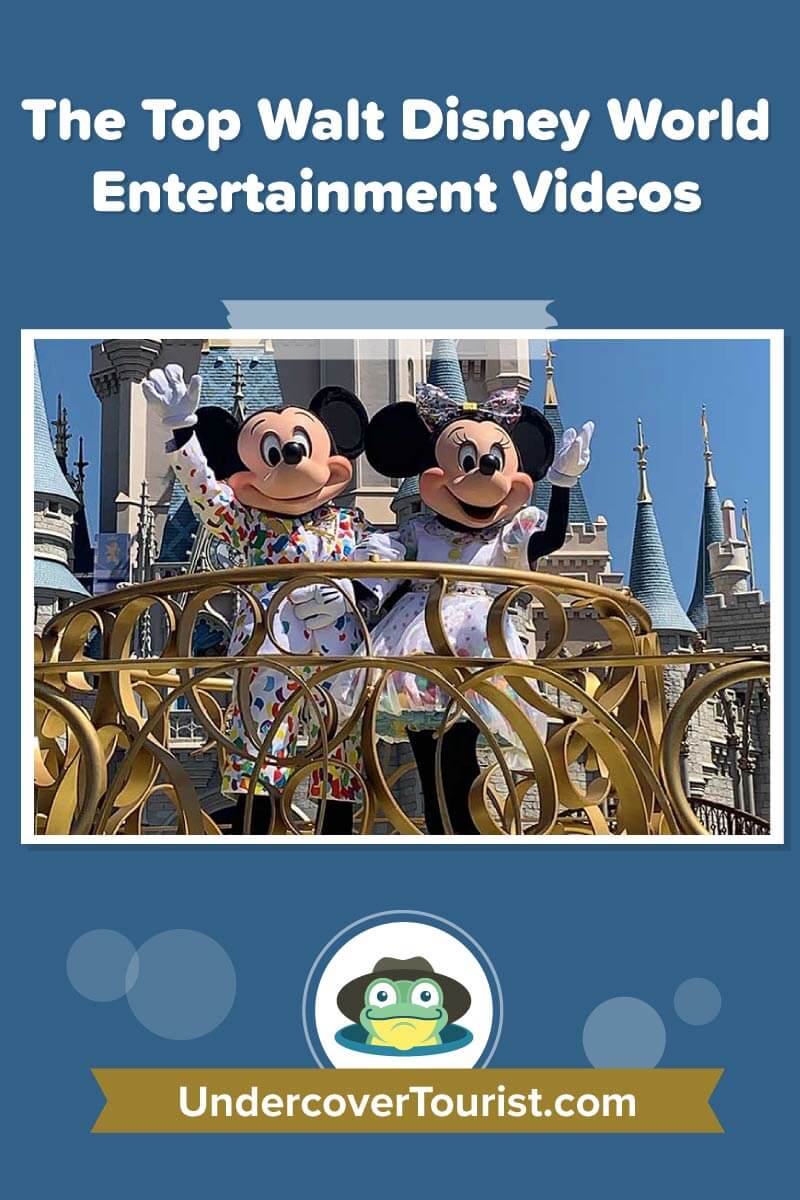 ‘Sup! Tad here. Disney World has so many toadally rad shows and parades, and as the Frog Family’s videographer, I’m always in charge of recording them for our YouTube channel. Whenever we frogs are missing the parks in between visits, we simply watch some of our top Disney World entertainment videos together because they never fail to put us in a good mood. It’s also fun to watch special holiday entertainment, or even former parades or shows that no longer hoppen in the parks. That’s the beauty of capturing it on camera — you can relive old memories too!

I’ve rounded up a few of our froggy favorite Disney World entertainment videos, so that you can relive these moments right along with us. Best of all, you don’t have to stake out a spot for a parade or arrive early to snag a good seat at a show! If you’re left wanting more, hop over to the Undercover Tourist YouTube channel, where you can find many more videos of Disney, Universal, SeaWorld and more (including ride videos!).

Festival of the Lion King at Disney’s Animal Kingdom

You don’t have to travel all the way to Broadway in New York to see a high-quality musical. Festival of the Lion King is one of our favorite stage shows at Disney World! It starts off with some audience members practicing their best animal sounds. Participate alongside them at home, and give it your best shot at roaring like a lion. As the show goes on, you’ll be mesmerized by the colorful costumes, soulful singing, dancing, acrobatics and even fire juggling!

Move It! Shake It! MousekeDance It! Street Party at Magic Kingdom Park

C’mon everybody, get your ears on! In honor of Mickey and Minnie’s 90th birthdays in 2019, the Move It! Shake It! MousekeDance It! Street Party debuted at Magic Kingdom. The mini-parade/dance party featured a new, original song “It’s a Good Time” that’s super catchy. (It would always get stuck in Mommy Frog’s head for the rest of the day, and she wouldn’t stop singing it.) Since TikTok dances are all the rage these days, why not learn the moves and dance along in a short video of your own. It's a good, good, good, good time!

For the First Time in Forever: A Frozen Sing-Along Celebration at Disney’s Hollywood Studios

As a big “Frozen” fan, this singalong show is one of Lily’s top picks. Two hilarious royal historians of Arendelle recount their kingdom's epic story with some help from Anna, Kristoff and Elsa. Prepare to belt out “Let It Go” whether you’re singing solo or in an ensemble with your frog squad at home.

It all started with a mouse. This projection show celebrates more than 90 years of Disney and Pixar animation, so it's fitting that Wonderful World of Animation begins and ends with Mickey Mouse himself. The Chinese Theater provides a stunning backdrop, as iconic movie scenes from “Coco,” “Aladdin” and many more play out against it. The show explores overarching themes of magic, family, adventure, romance, villainy and friendship.

Do you ever wish that the holidays lasted year-round? Me too! Well, I’ve got some good news. You don’t have to wait until October or December to watch videos of Mickey’s Boo-to-You Halloween Parade (which hoppens during Mickey's Not-So-Scary Halloween Party each fall) and Mickey’s Once Upon a Christmastime Parade (which hoppens during Mickey's Very Merry Christmas Party each winter). Get in the spooky spirit and wear a costume. Then, break out the Santa hats and spread some Christmas cheer. Why not? We won’t judge!

Hades plots to take over the universe, but things don’t go exactly as planned. He’s not the only one who wants to reign supreme ... Jafar, The Queen, Dr. Facilier and Maleficent also fight for power. Who will come out on top, or will they join their evil forces together? This special stage show is only available during Disney Villain After Hours events. So if you haven’t been able to hop to one yet, as Maui says, “You’re welcome.”

EPCOT hosts four incredible festivals throughout the year, and each one brings a lengthy lineup of concerts (or in the case of the Festival of the Holidays, celebrity narrators for the Candlelight Processional). While our Frog Fam enjoys seeing artists from all genres perform at the America Gardens Theatre, we especially love the Disney on Broadway Concert Series during the Festival of the Arts. The Broadway stars perform both hit Disney songs and original songs from popular Disney musicals.

For all you “Star Wars” fans out there, the Star Wars: A Galactic Spectacular will give you all the out-of-this-world feels. May the Force be with you while you listen to John Williams’ score and watch iconic moments from the film series projected against the Chinese Theater. Lasers and fireworks light up the night sky.

Rivers of Light: We Are One at Disney’s Animal Kingdom

Animal Kingdom’s nighttime spectacular received an update in 2019 that now features water projections of Disneynature live-action footage and beloved characters from animal-inspired Disney animated films, including “Brother Bear,” “The Lion King” and more. The stunning floating lanterns, combined with the uplifting musical score, always make Mommy Frog quite emotional. After all, the overall theme of nature and its beauty is inspiring to us frogs!

After a 20-year long run of IllumiNations: Reflections of the Earth, EPCOT Forever became the park’s temporary nighttime spectacular in October 2019. The show celebrates EPCOT’s past, present and future, paving the way for the future Harmonious show (which promises to be the largest nighttime spectacular ever created for a Disney park!). Until then, I marvel at EPCOT Forever’s special LED kites, which are pretty rad.

Happily Ever After at Magic Kingdom

Reach out and find your happily ever after! I saved the best for last! Magic Kingdom’s Happily Ever After fireworks spectacular showcases all of the Disney magic found in its classic and contemporary animated films.

I hope that my Disney World entertainment videos help keep the magic alive for you. Do you have a favorite show or parade that I missed? Share in the comments below. If you liked this roundup of videos, check out my top Disney World ride videos as well, and pass it along to your frog squad!