Our Wicked Fun Guide to Villains After Hours at Magic Kingdom

A note from Mommy Frog: After a temporary closure due to COVID-19, Walt Disney World Resort is slowly beginning to reopen! Disney Springs began a phased reopening May 20. Walt Disney World Resort will reopen its theme parks in phases, as well, starting July 11 for the general public! Magic Kingdom and Disney's Animal Kingdom will be the first parks to open, followed by EPCOT and Disney's Hollywood Studios July 15. For more details about park openings and procedures, read our blog post, which we will continue to update with the latest news. Guests who have purchased tickets for Disney Villains After Hours from March 16, 2020, through the end of the closure period will be automatically refunded. 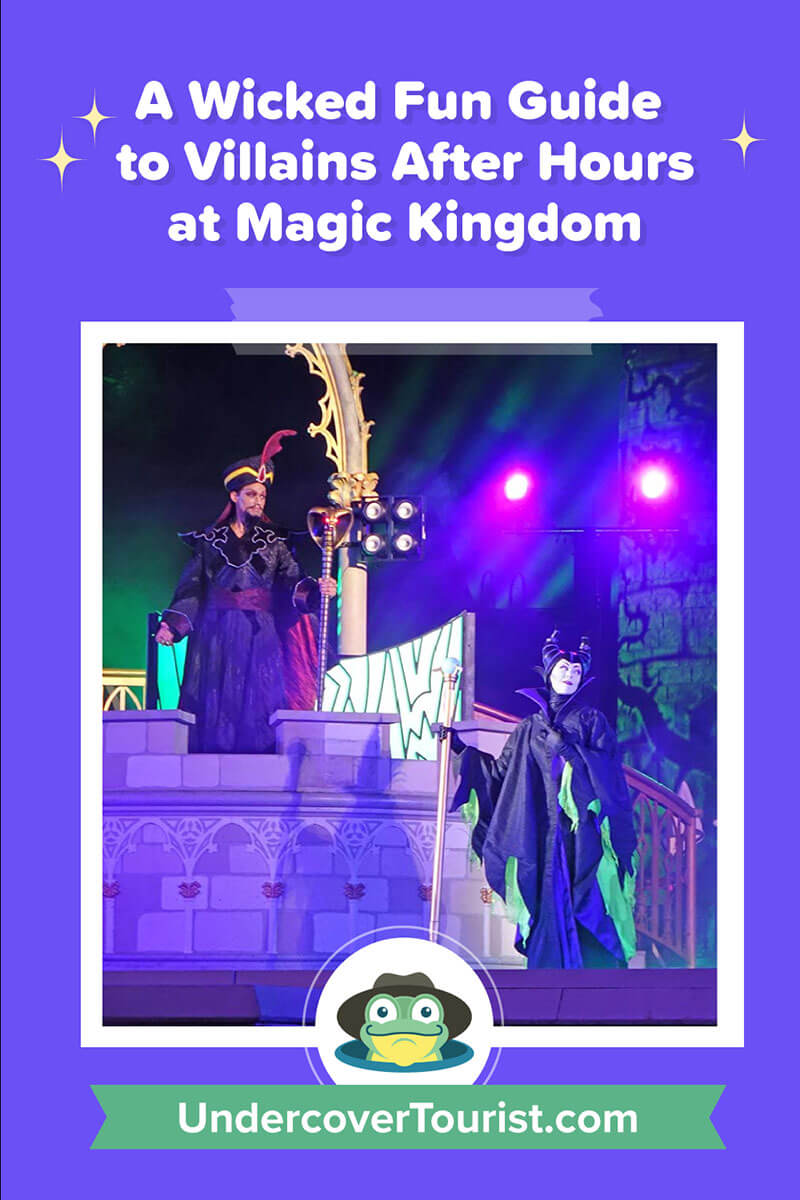 'Sup! Tad here. Are you ready to take a walk on the sinister side? On select nights, you can stay past park hours and party with your favorite Disney villains! This specially themed After Hours event debuted last summer, and we're excited that it's now back for revenge. It kicked off Feb. 7, 2020, and will run for 24 select nights until July 10. Those Disney villains deserve this extra recognition!

Magic Kingdom is transformed at night thanks to special lighting and music throughout the park, creating a foreboding atmosphere before Hades, Jafar, The Queen, Dr. Facilier and Maleficent take over the universe in the "Villains Unite the Night" stage show.

More villains join Maleficent the Dragon in the brand-new Villains' Cursed Caravan parade that features your favorites and their henchmen. You may even see some surprise villains before you leave. (Just know that the villains aren't available for meet-and-greets.)

With special merchandise and food offerings and an after-hours atmosphere fitting of the most vile villains, there's fun for every froggy at Villains After Hours events. Let's hop into all of the dastardly deets — including our tips and thoughts on whether the After Hours events are worth it!

Guide to Villains After Hours Events 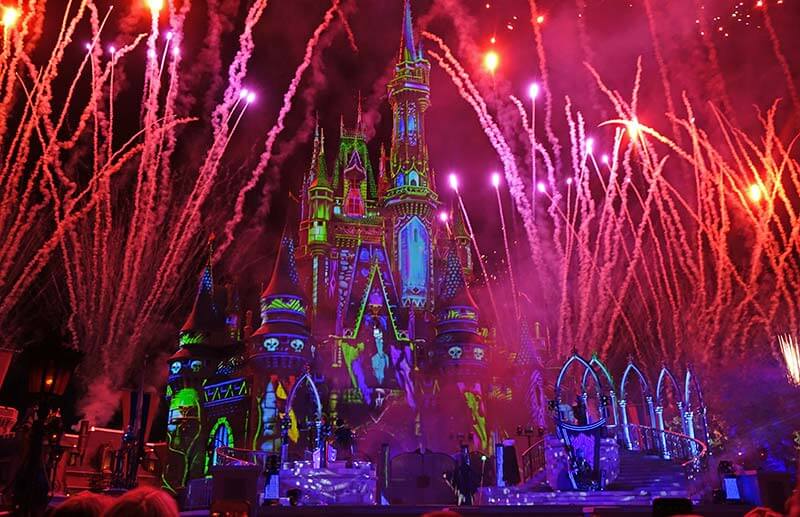 Overview and Dates | Arriving at Villains After Hours | Attractions and Entertainment | Food and Merchandise | Tips and Strategies | Is It Worth It?

Villains After Dark Overview and Dates 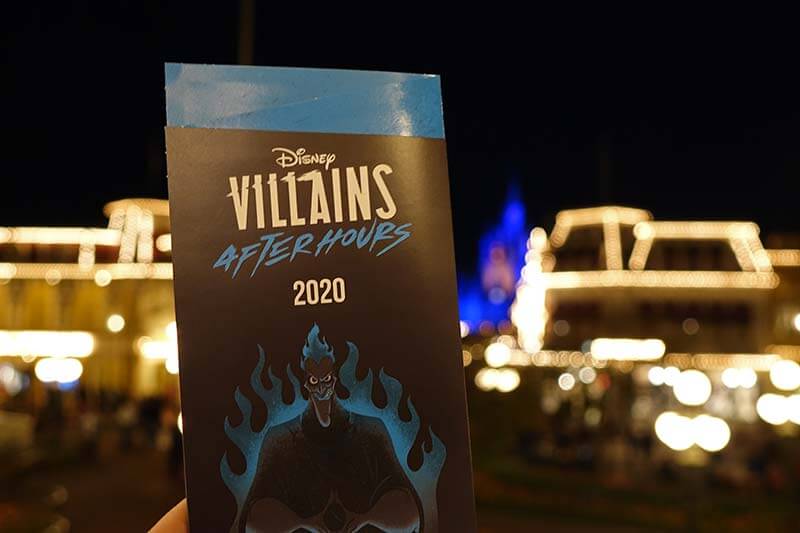 When my parents told me I'd get to experience yet another After Hours event, I was already stoked. When they told me it had a special villains theme, I leapt with excitement! (I also practiced my best evil laugh. When in Rome, y'know?)

Just like regular After Hours events at Disney's Animal Kingdom and Magic Kingdom Park, guests get to stick around long after the park has closed, making lines super short, and unlimited ice cream, soda and popcorn are all included with your admission. At Villains After Hours, though, the villains take over Magic Kingdom with special entertainment, ride overlays, food and merch.

Tickets are limited for each date and can sell out, so be sure to plan ahead and buy them in advance. Villains After Hours tickets can be purchased in advance for $145 per adult or child (plus tax), or $155 per adult or child (plus tax) for same-day admission. Annual Passholders and Disney Vacation Club Members can take advantage of a $30 per ticket discount. Or, you can save some extra green and purchase through your favorite theme park frogs!

Disney Villains After Hours at Magic Kingdom (10 p.m. to 1 a.m. unless noted below) 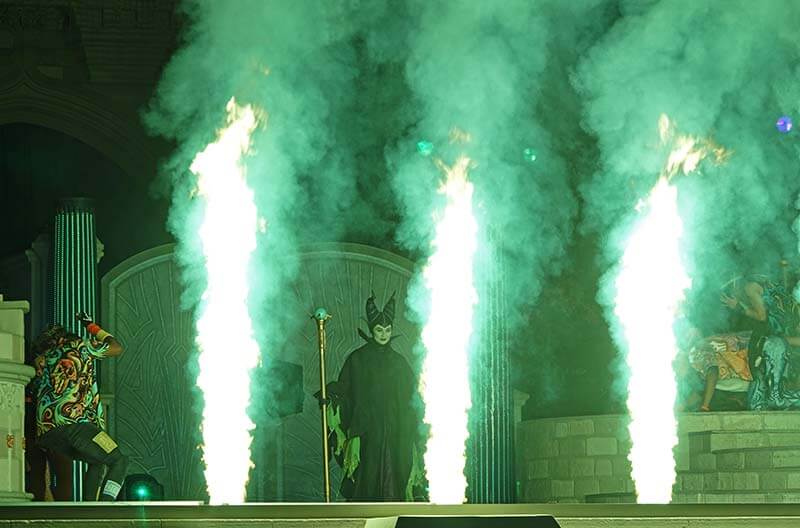 Arriving at Villains After Hours

Villains After Hours guests are able to enter Magic Kingdom as early as 7 p.m. You'll see cast members directing party-goers to a specific entry lane with an After Hours sign; once you scan your MagicBand or ticket, you'll also receive a wristband. If you'll already be at Magic Kingdom during the day, there are wristband stations set up around the park, as well. No need to exit and re-enter! 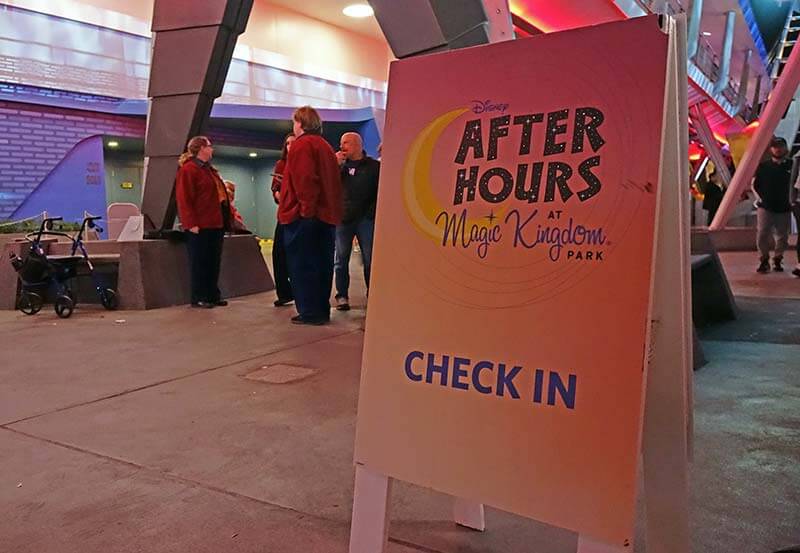 Your wristband is your golden ticket, as once the park closes, you'll need to show your wristband at each ride or land that you'd like to access, while guests without wristbands will be corralled toward the exit.

Once the park officially closes, the castle will change to more creepy colors and malevolent music will fill the park. The villains have arrived!

Attractions and Entertainment at Villains After Hours 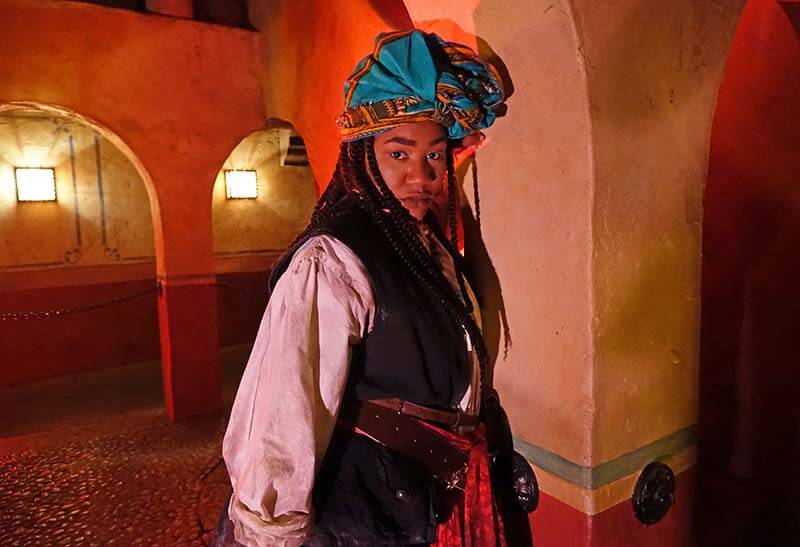 Pirates of the Caribbean and Space Mountain each get a slightly wicked makeover with special enhancements. We thought the Pirates of the Caribbean overlay with live actors was super cool. The actors somehow still looked like they were animatronics on the ride! There are no jump scares, so this is safe for tadpoles, though the live actors do issue some warnings in the queue that can be a little foreboding. (This ride overlay is similar to what happens during Mickey's Not-So-Scary Halloween Party.)

If you're a Space Mountain fan like me, make sure you hop on that rocket ship! Riding in complete darkness — and not knowing what would come next — was so rad! (Lily sat that one out with Mommy Frog.)

In total, we were able to hit about 10 attractions during this event! You could definitely do more if you hop to it, but we took our time to enjoy the entertainment and treats, as well as the decor, so we weren't the speediest frogs at the event. We also rode Pirates four times in a row, but that's besides the point. A Pirate's life for me! Over 20 attractions are open during Villains After Hours, including:

Wait times were minimal. For some of them, such as Mad Tea Party and The Magic Carpets of Aladdin, we just hopped right on. Most wait times were 5 to 20 minutes, with the longest at 35 minutes for Seven Dwarfs Mine Train and Space Mountain. The lines also waned as the night went on. 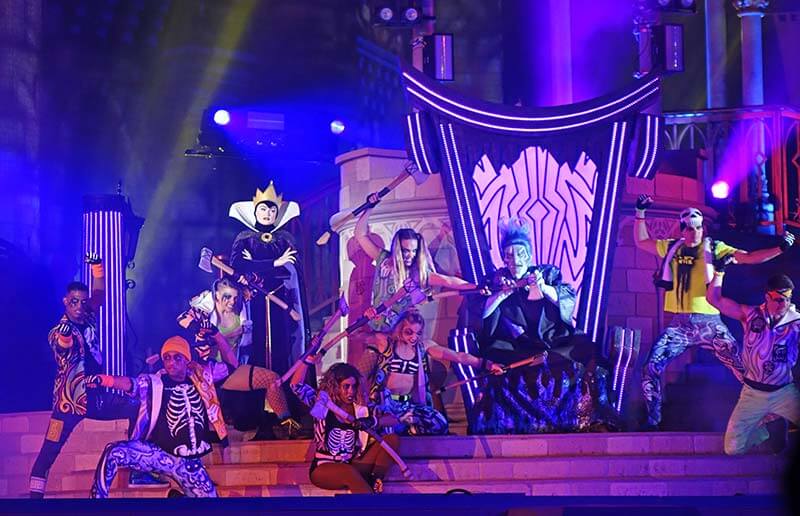 You can catch Hades, Meg, Jafar, The Queen, Dr. Facilier and the original baddie herself, Maleficent, for the Villains Unite the Night stage show at Cinderella Castle. The show hoppens twice throughout the night. The planets have aligned and Hades is ready to take over the universe! Too bad the other villains feel their evil calling, too. Who will reign as the ultimate villain? For parents of tadpoles, Lily was toadally fine with this show. While the villains are present and their nature is a little, well, evil, there's nothing overtly scary hoppening. (In fact, you may even find yourself chuckling at Hades' rapid-fire one-liners.) The stage show itself is nothing to write home about, but the fireworks and projections on the castle are worth catching! 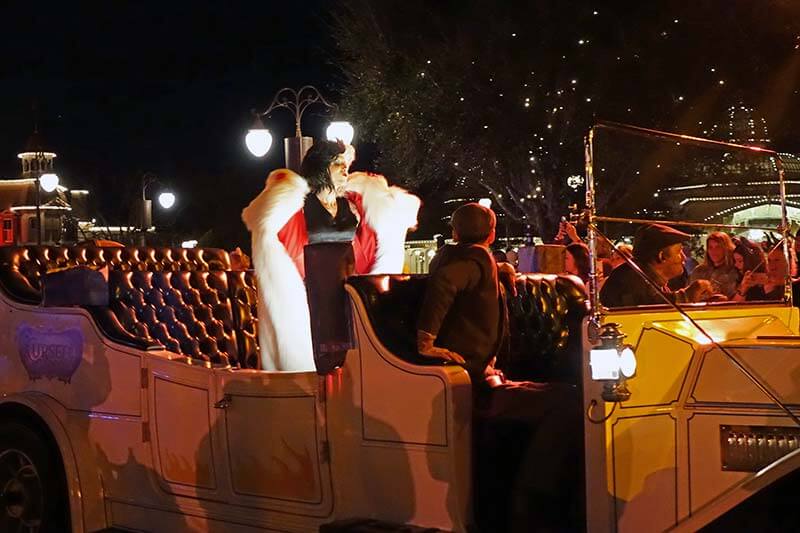 Last year, Maleficent stalked the night in her dragon form for the first time. This year, she is back with some of her fiendish friends for the new Villains' Cursed Caravan parade. Gaston leads the procession on horseback. Lady Tremaine sits in a horse-drawn carriage, followed by Anastasia and Drizella on foot. The Queen of Hearts gives orders to her troop of Playing Cards along the route. Dressed in her fur coat, Cruella de Vil rides stylishly in a car driven by Jasper and Horace. Ursula floats menacingly with her glowing tentacles and magical contract in hand, along with her eel minions, Flotsam and Jetsam. Oogie Boogie, the Bowler Hat Guy, Captain Hook and the Big Bad Wolf share a float before Maleficent the Dragon's grand finale. 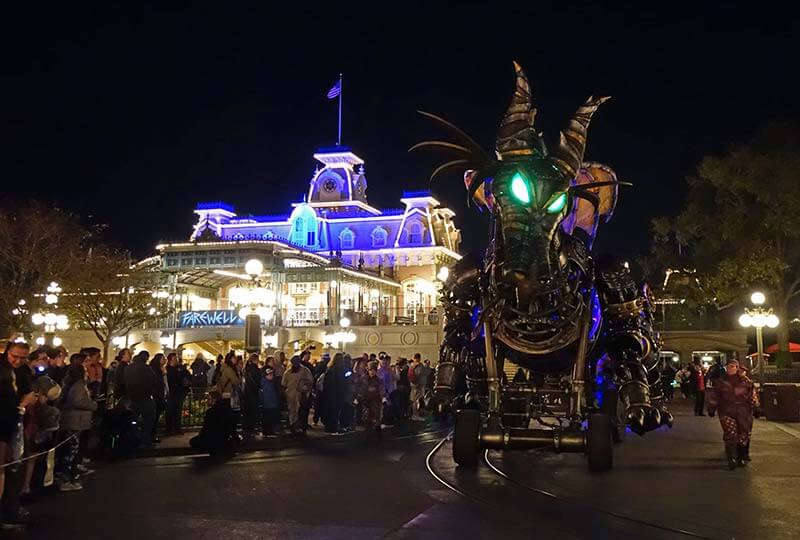 The route begins and ends in Frontierland during the first parade. But If you really want to make every minute of your night count, attend the second parade, during which it ends at Town Square Center instead so that the villains can escort you out. 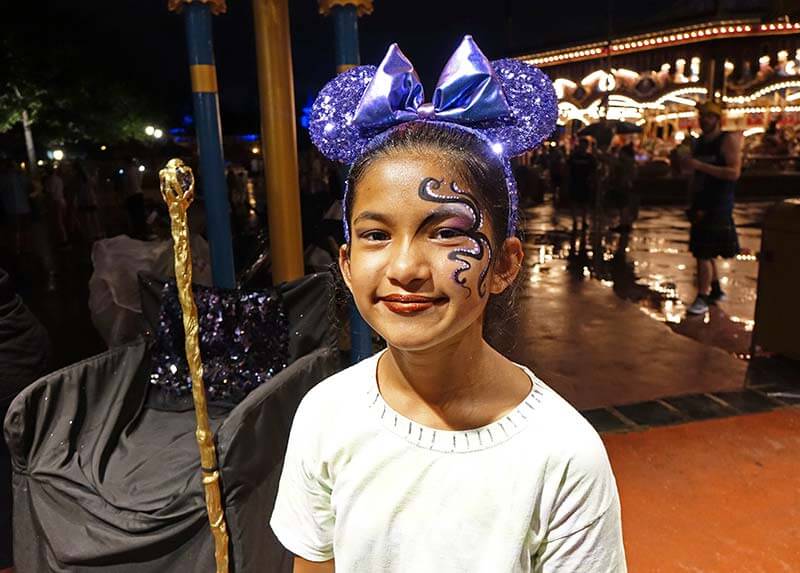 Throughout the night, for an additional charge, you can show off your sinister side with face painting designs at Fantasy Faire. Lily thought it was a fun way to enhance her Descendants-inspired outfit!

Food and Merchandise at Villains After Hours 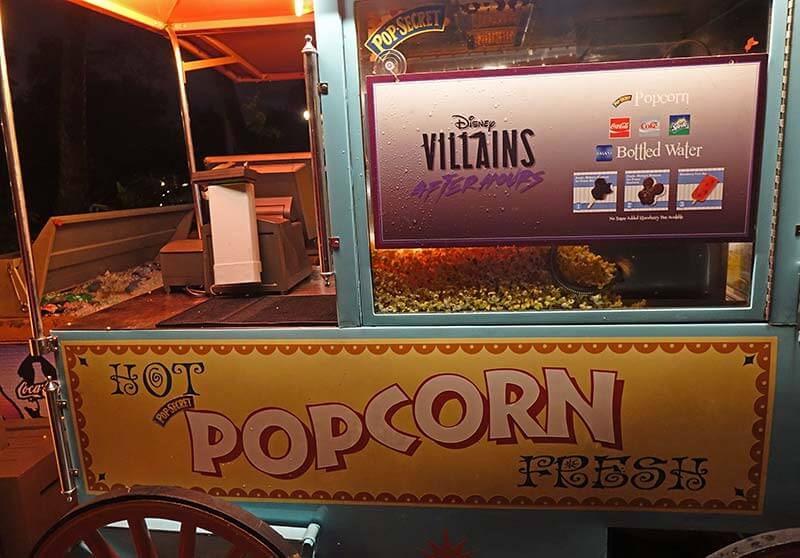 Unlimited popcorn, ice cream bars and drinks (bottled water and Coke products) are included with your admission. But you can also find some specialty themed food and drinks around the park at the following locations: 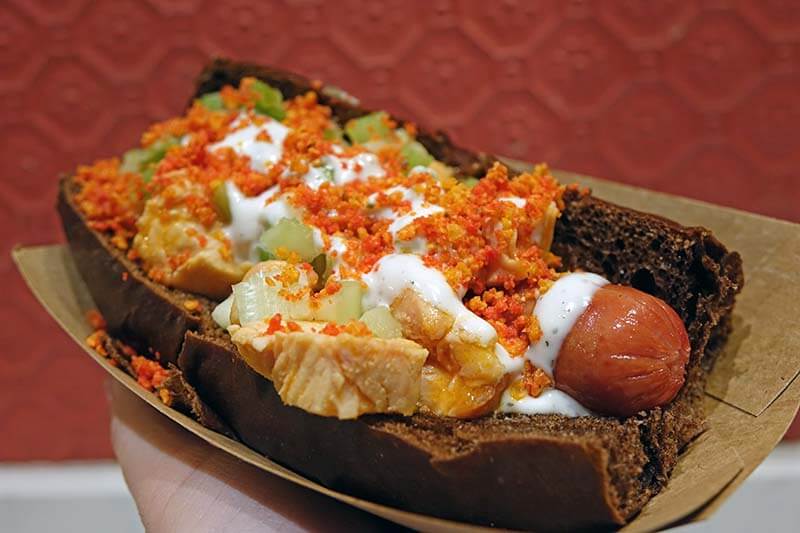 We found some of the drinks a little sweet for our taste (even that sugar-fiend Lily), but our fave treat was the Body Language cake. On a hoppy note, most portions are large enough to share (if you're in a giving mood, that is).

A super hopful cast member let us know that some of the villainous merchandise is available anytime. If you want merchandise exclusive to the event, look for the Oogie Boogie light-up tumbler, tank tops, pocket tees or T-shirts that feature the event logo. Stop by the Emporium, Fantasy Faire and Star Traders for the full event collection. Other Disney Villain-inspired merchandise can be found at Fantasy Faire. Plaza del Sol Caribe Bazaar and Tomorrowland Light & Power Co. also have select event merchandise available.

Villains After Hours Tips and Strategies 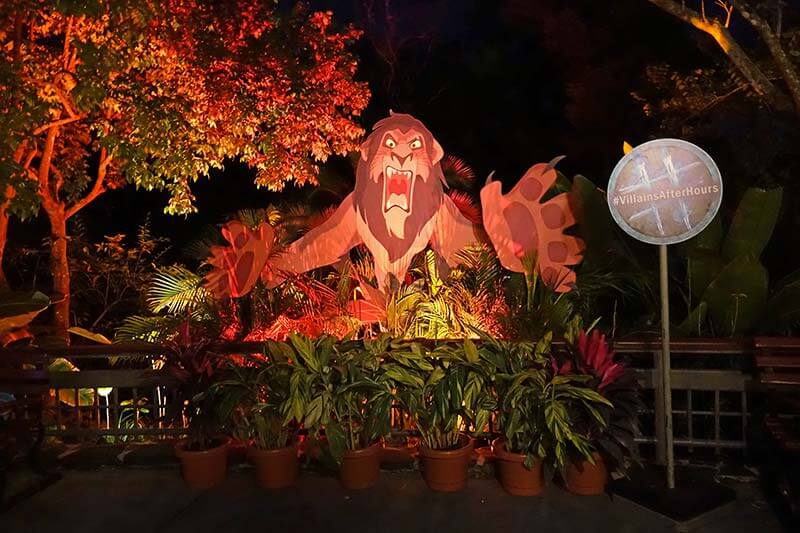 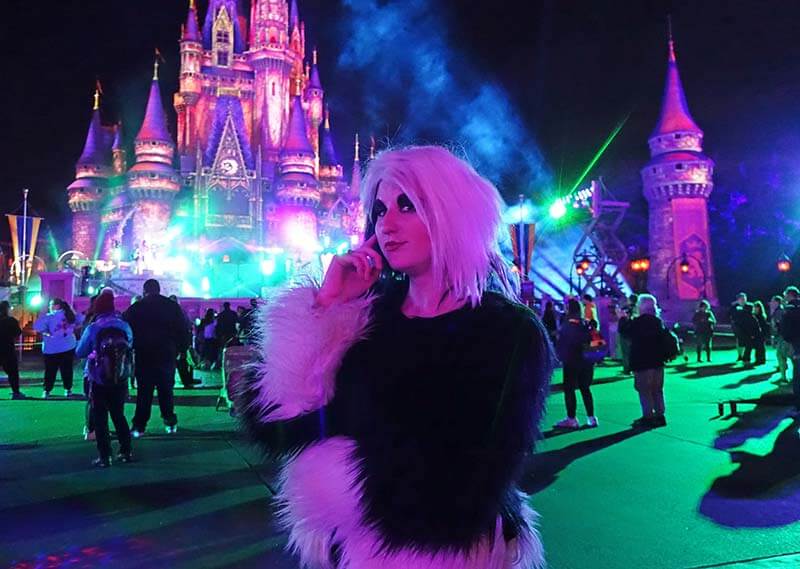 Is Villains After Hours Worth It? 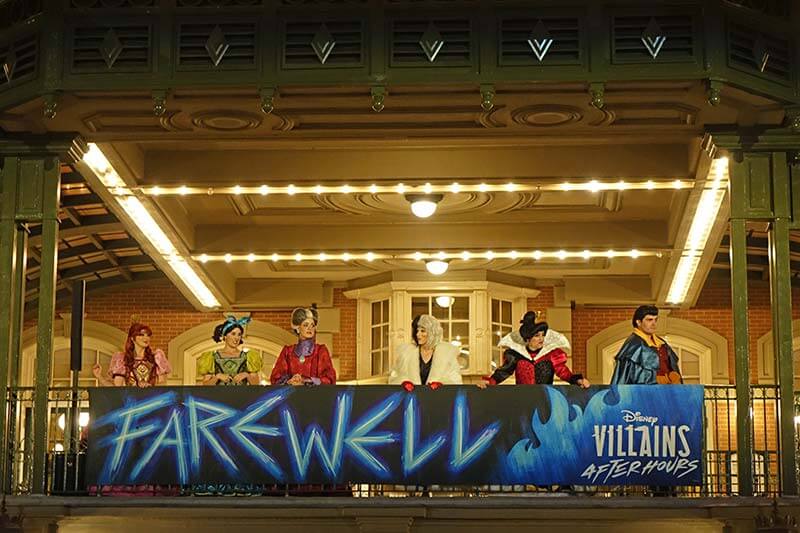 This question is always tough to answer, as it varies by family. For us, since we had another day at Magic Kingdom to get our "daytime" park fix in, we thought this was a great enhancement. Of all of the After Hours events, Villains has wicked fun theming, the most rides open (with special overlays on a couple) and villainous extras like sweets and treats to make things extra enjoyable. Who could say no to staying in Magic Kingdom after it closes?!  We think you'll enjoy it, too, if:

Have you attended Villains After Hours? What did you think? Be sure to let us know in the comments below!

Related: How to Make the Most Out of Disney After Hours Events