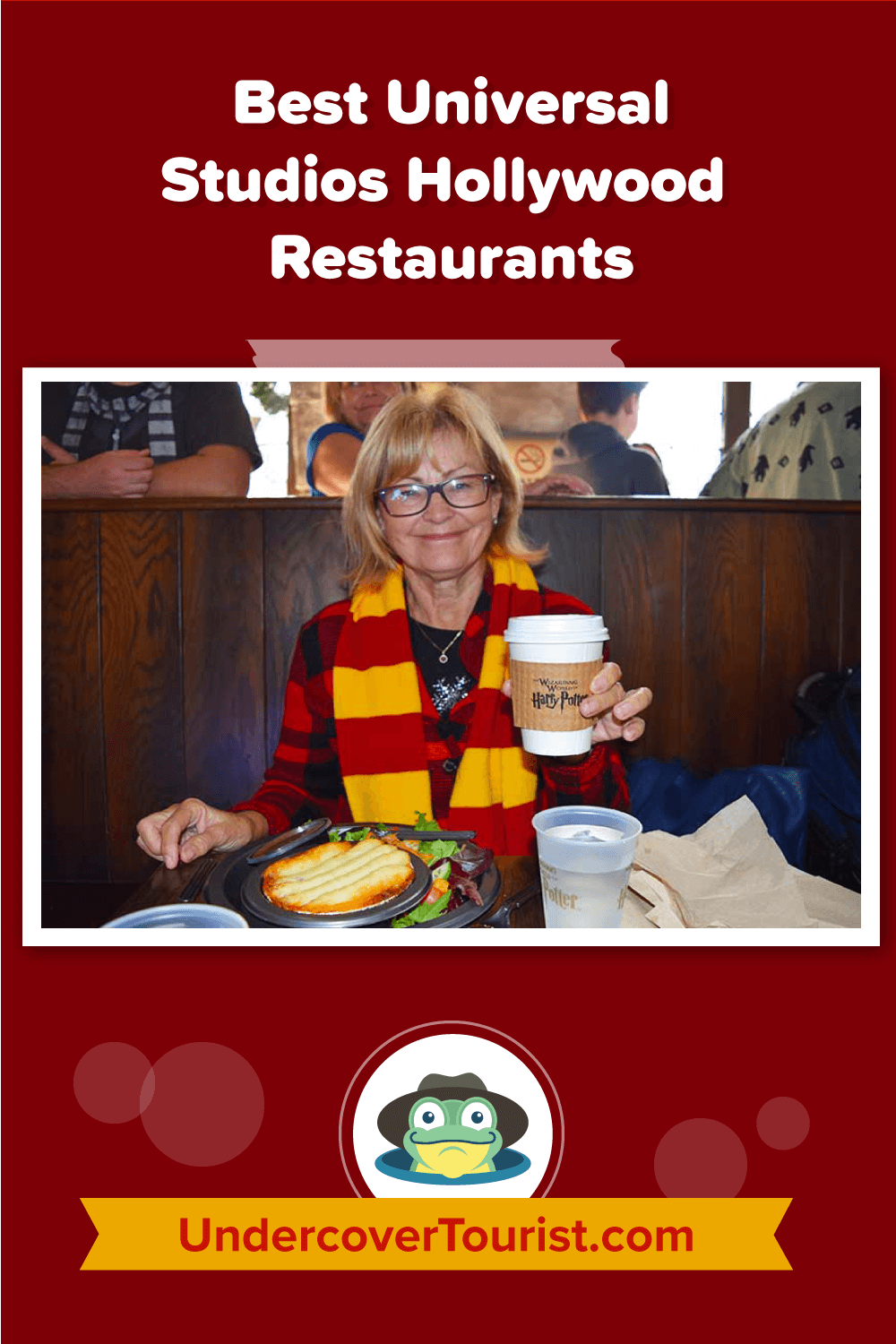 It is challenging for first-time visitors to plan meals at Universal Studios. There is simply not a lot of advance information or menus available to guests when it comes to dining in the park. All of the Universal Studios Hollywood restaurants are quick-service locations. (If you are looking for a table-service restaurant, there are many restaurants outside of the park at Universal CityWalk.) Each member of our frog squad has his or her own favorite places to eat in the park, so we tend to hop around to satisfy every frog’s taste buds. We’ll give you the scoop so you can dig in and make a dining plan that works for you! 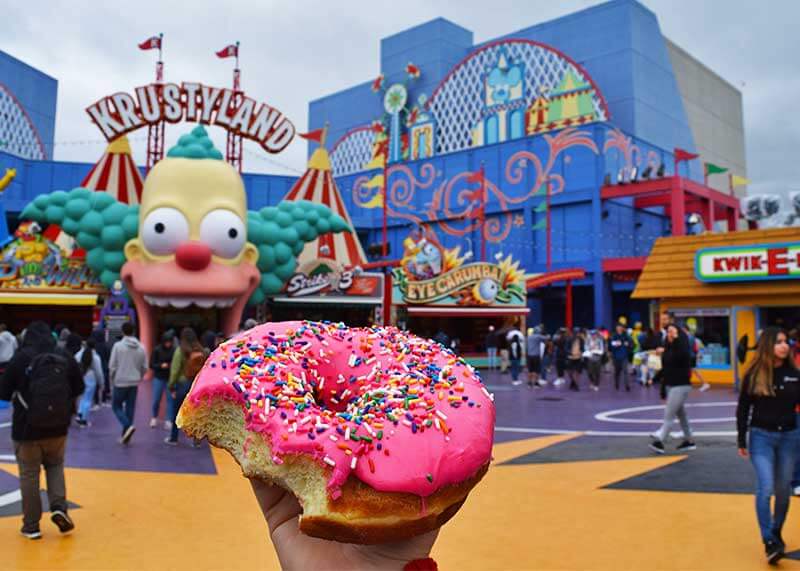 Our tween, Tad, enjoys the standard American food (with a Simpsons flair) in Springfield U.S.A. You can get your pizza, pasta and Caesar salad fix at Luigi’s. Eat your way through a giant doughnut at Lard Lad Doughnuts after enjoying a Krusty Burger and mammal milk shake at Krusty Burger. Hop on down to Cletus’ Chicken Shack for some fried chicken, chicken and waffle sandwiches or chicken “thumbs.” (You know, chicken don’t have fingers either.) 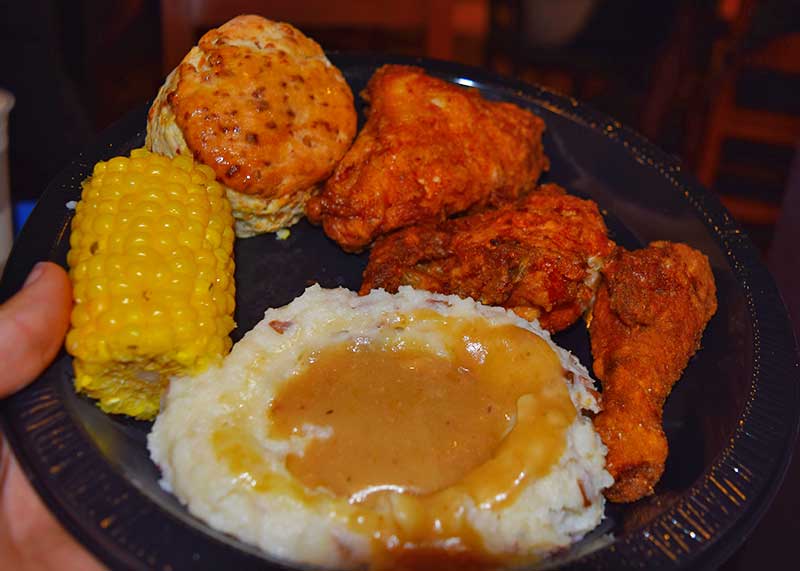 We all enjoy hopping by the Bumblebee Man’s Taco Truck for the Mucho Macho Nachos with carnitas as well as their three kinds of tacos. I am not a beer drinker, but other guests and "The Simpsons" fans seem to love tossing back a cold glass of draft Duff beer in the beer garden. You can drink Buzz soda in Springfield U.S.A., as well. At Moe’s Tavern, the whole family can enjoy the Flaming Moe, a nonalcoholic, fizzing orange drink that comes in a souvenir cup. It’s fun and will cause other park guests to stop you and ask you what it is! You can also find frozen Kwik-E-Mart Squishees throughout the land. 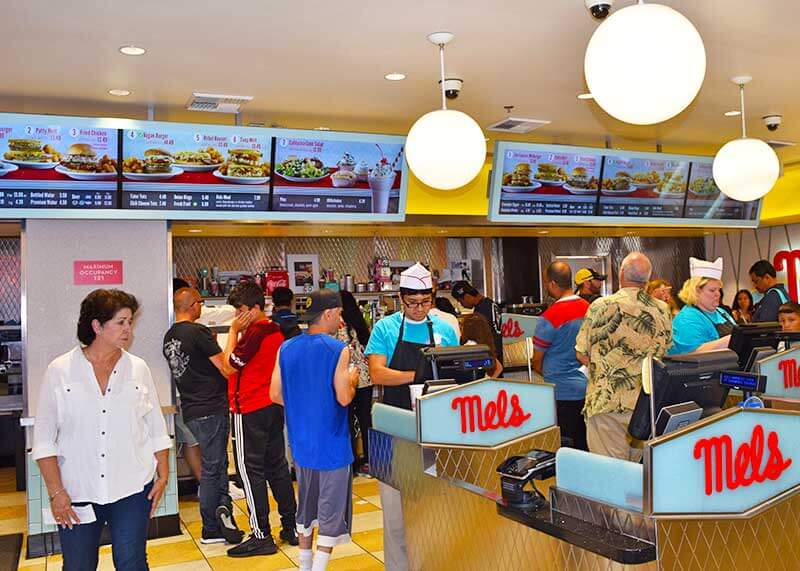 Tad also likes the kid-friendly American food at Mel’s Diner, a 1950s themed quick-service “drive-in” diner with booths inside and vintage cars out front. He often gets a burger, fries and shake or root beer float. The diner food never goes out of style. We especially jump for the can of Who Hash and festive seasonal offerings during Grinchmas at Universal Studios Hollywood. 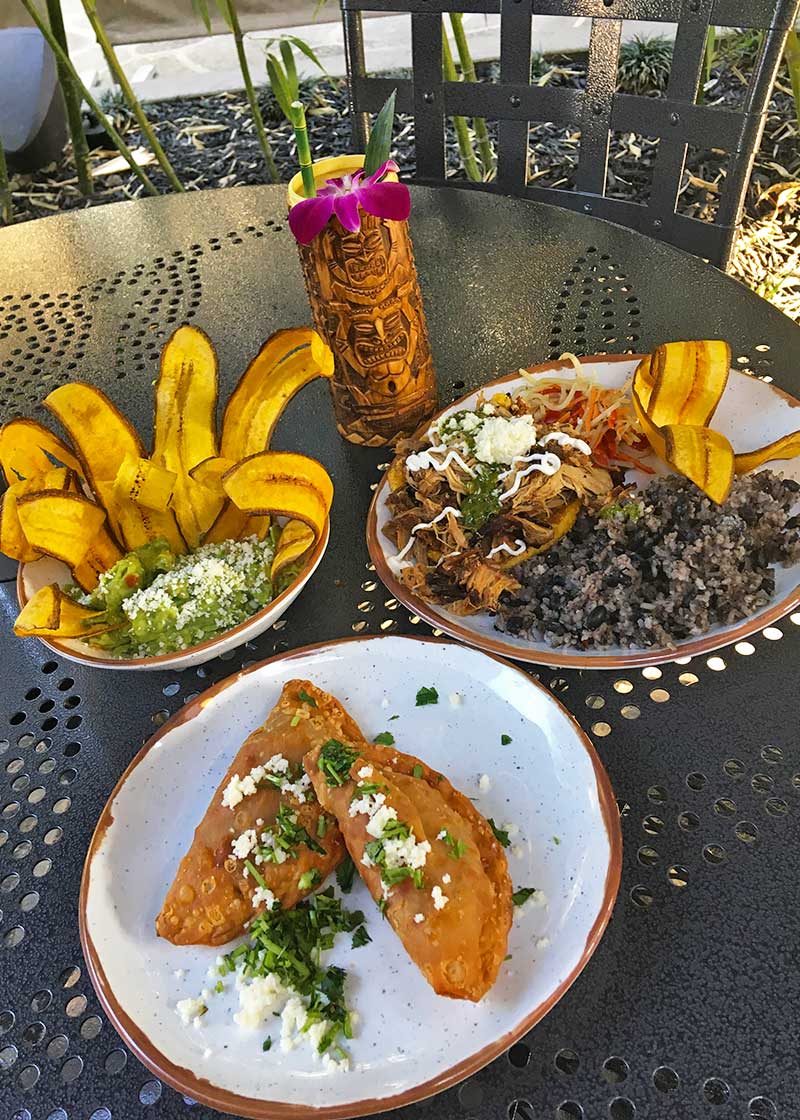 If you find yourself working up an appetite while riding the thrill rides in the lower lot, be sure to hop by the newly designed Jurassic Café. The food is creative and tasty. Snack on pomegranate guacamole with plantain chips, tropical fruit salad sprinkled with coconut or the potato and chorizo empanadas. Leap and I like to indulge in these meals. With mouth-watering dishes such as roasted mahi mahi, slow-roasted mojo pork (with a jackfruit vegetarian alternative), citrus glazed chicken, salads, burgers and more, you’ll find plenty to feed your crew. It doesn’t feel like typical theme park food.

Pssst … you won’t find them on the menu, but you can order french fries if you have that picky eater in your family who won’t eat rice and beans or plantain chips. You can hop upstairs for more tables — some have a view of the boats from Jurassic World – The Ride making a splash. It’s also fun to watch guests meet dinosaurs from up there.

Parents may want to enjoy tropical adult drinks from the Isla Nu-Bar just in front of Jurassic Café. Do you want a money-saving tip? Of course you do! Order one drink and then bring back the included souvenir cup (seen above) to save several dollars on the next drink.

Also in the Lower Lot, you can get quick Chinese food at Panda Express or a corn dog at Mummy Eats. You’ll find a Starbucks and a Studio Scoops ice cream shop nearby if you want to partake.

Try Mexican Food at Cocina Mexicana in the Upper Lot 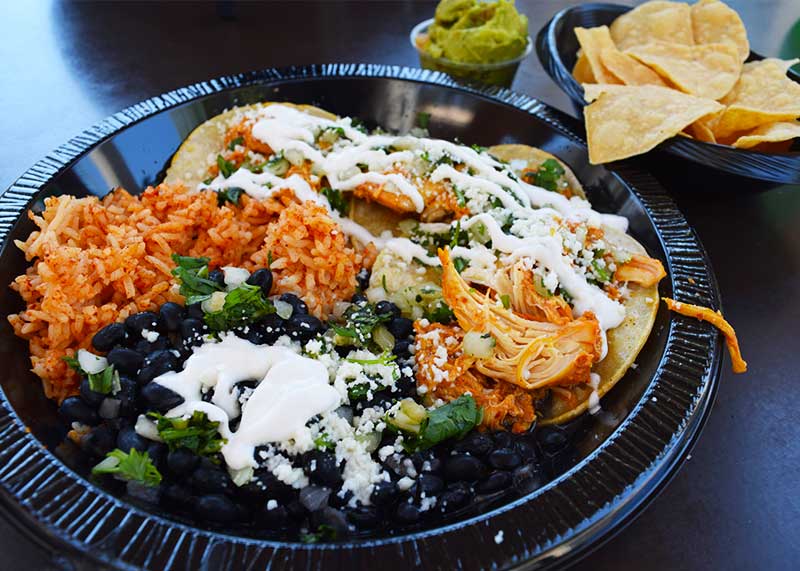 You are in Southern California, so you should definitely enjoy some Mexican food while you are town. We liked the tacos at Cocina Mexicana. You’ll find a taco salad, wet chicken burrito and more. You can sip some frozen margaritas or indulge in desserts such as tres leches cake or buñuelos as you watch the fountains and guests meet their favorite characters in the area.

Eat on the Go 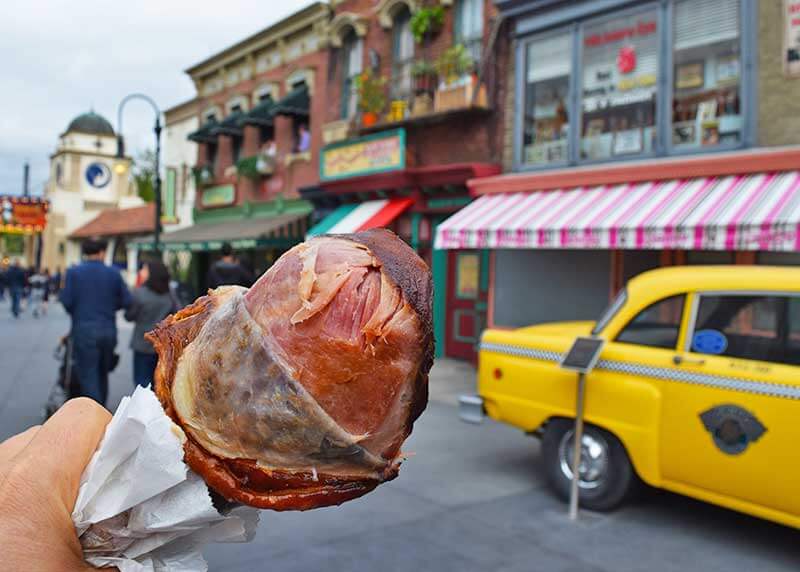 Sometimes it doesn't feel like there's time to stop and sit down for a meal. If you want a quick bite, may we recommend a heartier mini meal than, say, cotton candy, churros or ice cream? (We certainly enjoy these treats when visiting Universal Studios Hollywood, as well. You’ll just want some heartier food to keep you hoppin’ if you are skipping meals to save time.) Grab hot or cold items to go from the Studio Café in the Lower Lot and the Palace Café in the Upper Lot. You’ll find prepared salads, sandwiches and hot entrees (such as turkey legs), as well as fruit cups if you are just hopping through. Grab cold salads, sandwiches, fruit and bakery items from French Street Bistro in the Upper Lot.

The snack bar behind the box office has turkey legs and hot dogs. There is a Nathan’s hot dog cart across the way in the New York scenery, of course. Down in the Lower Lot, you can grab that corn dog from Mummy Eats to nosh on on your way to TRANSFORMERS: The Ride 3-D. Rather than skip meals when trying to maximize time at Universal Studios Hollywood, try eating at off-peak times when the lines are shorter. 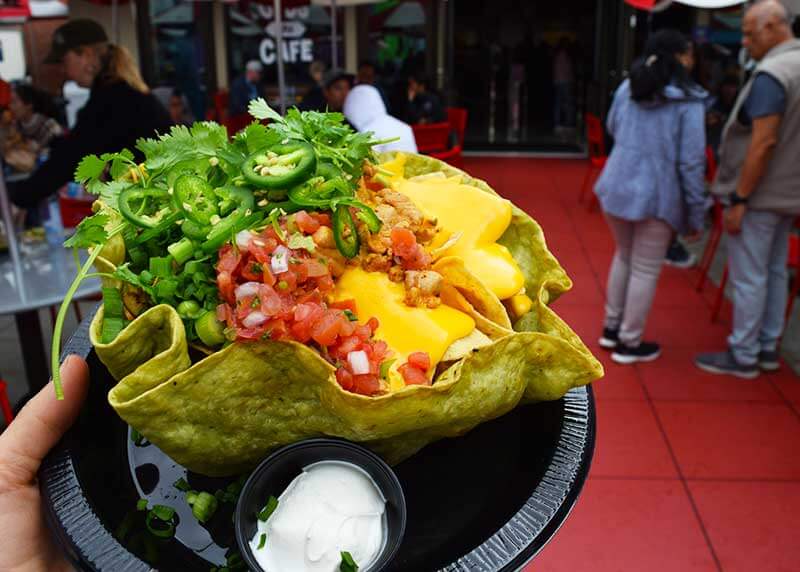 Your little minions may find Gru’s Lab Café to be top banana at Super Silly Fun Land. Dig in to El Macho Nachos (which come in a toadally edible green tortilla bowl, and we frogs so love the color green!), backyard chicken and grilled cheese. The grilled cheese comes with pulled pork, but you can it order with just cheese — again, that’s good to know for those picky minions. The desserts are fun Minion cupcakes and the Freeze Ray Smoothie. You can also find the Freeze Ray Smoothie and more desserts and themed snacks at Despicable Delights around the corner. Hop over to learn about other Minion and fun Universal treats.

Our toddler, Lily, gets a frog kick out of some of the creative movie-themed dishes at Gru’s Lab Cafe, but it’s not my favorite spot for a meal. I tried Dr. Nefario’s Lab Salad (with udon noodles, shrimp, banana chips, peppers, greens and more with an Asian ponzu dressing). The crazy combination of ingredients truly nailed despicable. But let’s move on to one of our family’s most favorite Universal Studios Hollywood restaurant of all. 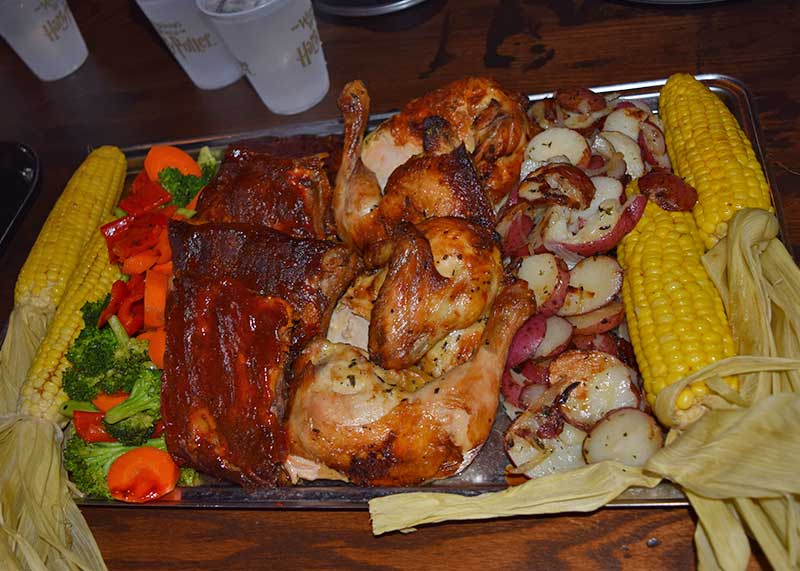 We've saved the best of the Universal Studios Hollywood restaurants for last. Definitely hop into The Three Broomsticks in Hogsmeade for a meal. The menu includes the Great Feast (a feat made possible with the help of house elves, we presume) as well as other English favorites. You can find bangers and mash, shepherd’s pie, ribs, fish and chips, chicken, beef Sunday roast, an asparagus platter, salads, soups and more. The tadpoles can order chicken tenders, macaroni and cheese, a chicken quarter and fish and chips off of the kid menu. The Great Feast feeds the entire family with chicken, ribs, salad, corn, vegetables and potatoes. We toadally love the desserts. The gooey Butterbeer Potted Crème and Sticky Toffee Pudding with ice cream are our top favorites.

You can get cozy in a booth or table that looks like it came out of an old English pub. The décor and music immerse you into the Wizarding World of Harry Potter, while you enjoy the jolly good food. There are tasty seasonal offerings, plus hot Butterbeer, during the holidays.

The Three Broomsticks is also a great spot to pick up breakfast in the park. You may want to wake up early and rush to park to be there before park opening. After riding Harry Potter and the Forbidden Journey before the line gets long, you might realize your tummy is rumbling. Hop in to the Three Broomsticks for an English breakfast!

At the other end of the restaurant is the Hog’s Head, which offers specialty beers such as Wizard’s Brew and Dragon Scale. Adults can also knock down some Fire Whiskey and other themed drinks. Both locations offer nonalcoholic Butterbeer and Pumpkin Juice.